The long drive east is nothing to write home about…yet here I am doing exactly that. Imagine driving along a road and feeling like you keep going back in time and passing the same section over and over. Squished raccoons and skunks splattered along the highway were the only thing that made the hundreds of miles of cornfields less monotonous. Gale force winds caused a constant flow of tumble weeds to blow across the road which excited us at first and then the flow of them didn’t stop for miles so they too became mundane. 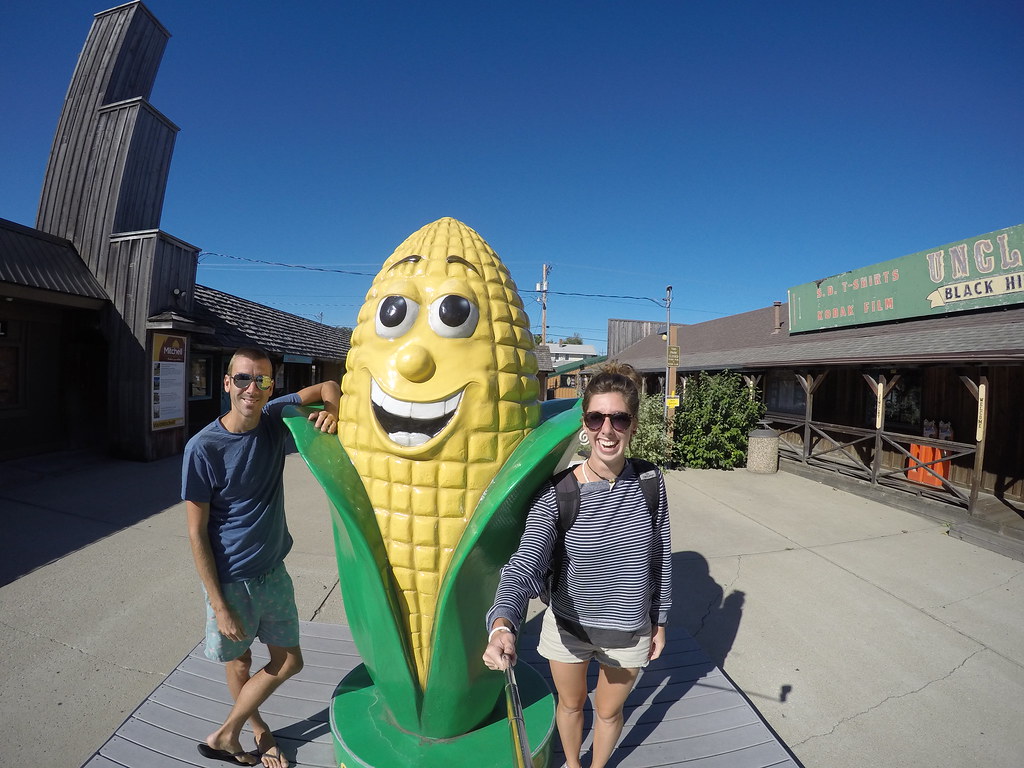 We don’t normally take the major highways, preferring the quieter rural roads but seeing as there’s not much en route we were happy to make some head-way east. A billboard advertised a radio channel with the word cool in it like ‘cool tunes 88.7’ or something, so we found the channel and ‘We all live in a yellow submarine’ was playing. Maybe cool means something else round here. There was so much corn that the town of Mitchell had built a palace out of it. My imagination was running wild as I envisioned the whole building being made from corn, but it was in fact a brick building covered in corn art. It was brilliant, don’t get me wrong, but I couldn’t help but feel they’ve let themselves go after seeing photos of the palace 100 years ago and it looked fabulous with turrets and spires, no buildings around it and corn everywhere. But now it’s sandwiched between other properties. Every year they change the art work and this year was ‘Rock of all ages’, it was amazing the art they created with just corn. They used a variety of corns to get different colours and halved each piece and stapled them on in a ‘colour by numbers’ style. There was a great Elvis Presley and Michael Jackson too. Inside was a small arena room where they obviously host local sports and a sign suggested the local team was named the Kernels…doesn’t get cornier than that! 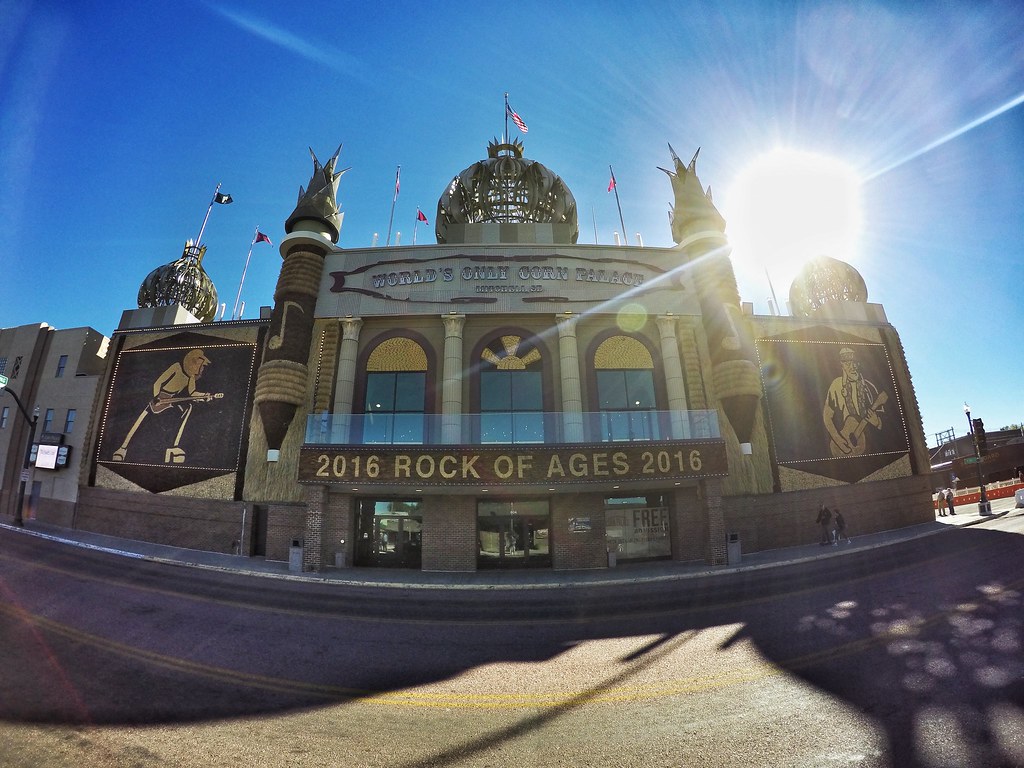 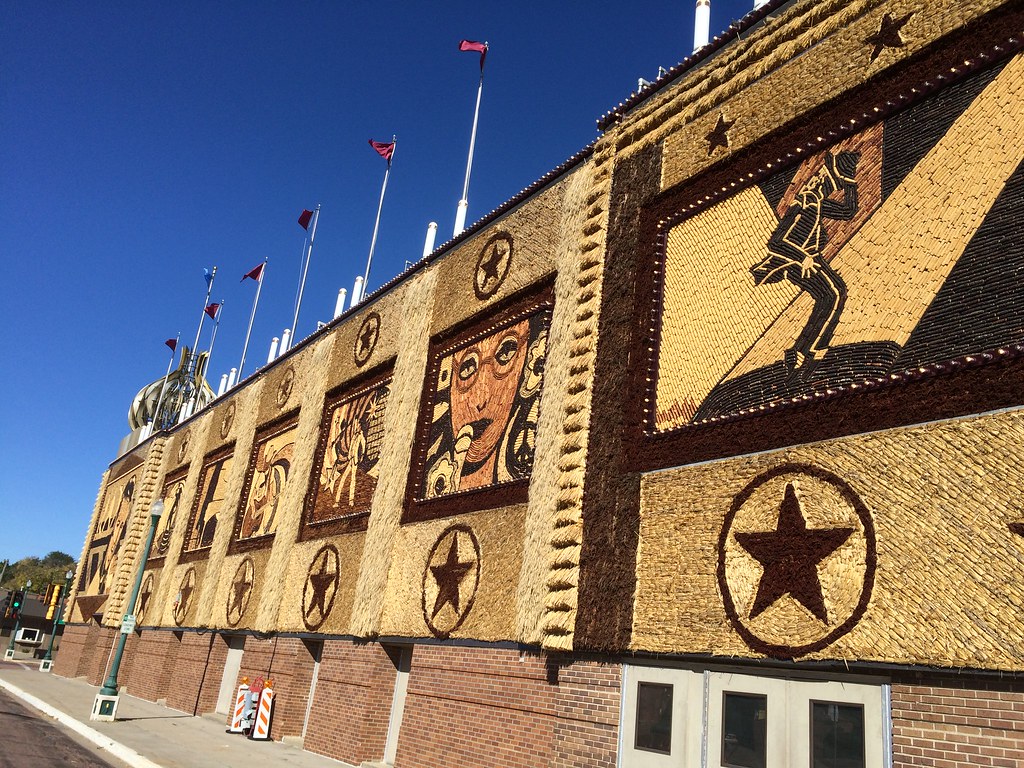 Craig wanted to play the 20 questions game to keep his mind busy and said he would go first and be anything in the world, anything!! I argued for awhile saying that there had to be a subject, like a celebrity for example, everyone knows that right?! We argued and argued which killed at least 10 miles of driving before I gave in. It was the most stupid game I’ve ever played, I tried for the first five questions; are you living? are you bigger than Daphne? Can I see you now? Then I got really frustrated at the game, who the fuck suggests they play 20 questions and says they could be ANYTHING?! The last 12 questions were ‘are you a tyre, hay, lamppost…’ anything I could see and name to end the game and find out that Craig was in fact a Condom. Of course Craig thought I just didn’t give the game enough effort so asked me to be something this time. He really tried, bless him, but actually ran out of questions to ask after number 16. I was a poker chip and a winner in my mind. I won the argument and we were animals or celebrities after those two catastrophic rounds. We crossed from South Dakota into Minnesota and after a while we veered off the motorway and took some country roads down to Harmony which is home to Minnesota’s largest Amish community. The Amish are of Dutch descent and hold strong to their traditional ways. They don’t own cars or modern technology, instead doing everything the old way. Warning signs along the road had images of horse-drawn wagons and we soon spotted some horse poop along the side of the road “ITS AMISH HORSE POO!”. It was followed up with our first wagon; a pure black horse was pulling a black box covered on three sides. We got a peak of a lady inside the carriage in very dark clothes. It seems the women wear long dark dresses and bonnets and the men have rounded hats, one chap we saw had a bowl-cut hairdo visible underneath his hat and a shaved face except for a long black beard. Another mans beard was so long and abundant that it was blowing frantically in the wind as he was riding in his wagon, it almost impaired the view for passing cars. 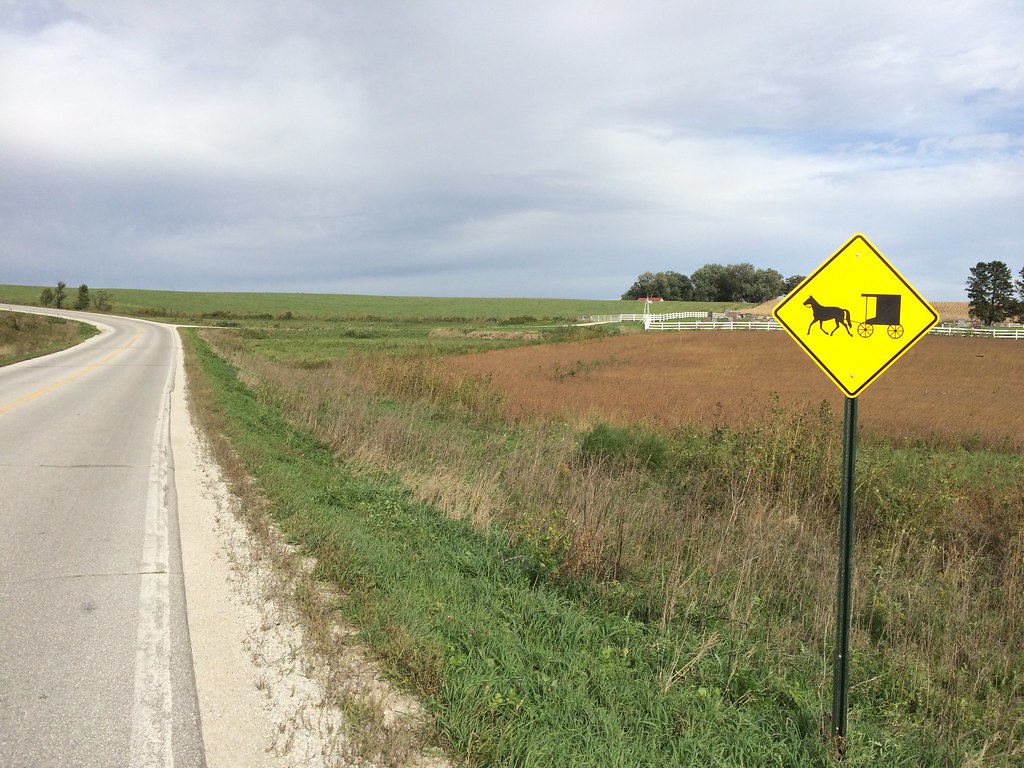 We went to the info centre to find out some good roads to see more Amish people and the way they live but it seemed the village didn’t want to educate us for free. We could either pay for a driven tour – not gonna happen, or rent a cd directing us around backroads with information about the Amish….for $26! For a rented cd! Fuck that. We hit the road on our own and wound up in Granger which was a tiny village with nothing but a few houses. One property had lots of nice barns, wagons and horses outside and two sweet Amish children dressed identically to the grown ups but mini-versions. We drove along a section of road where the border cut through, Craig was in Minnesota and I was in Iowa! The neighbouring village of Florenceville wasn’t much bigger and their ‘main street’ was a single lane dirt road with a few houses. I had to double take when I saw a couple more kids running through a field with a dog. In their old fashioned clothing it was like looking at ghosts. 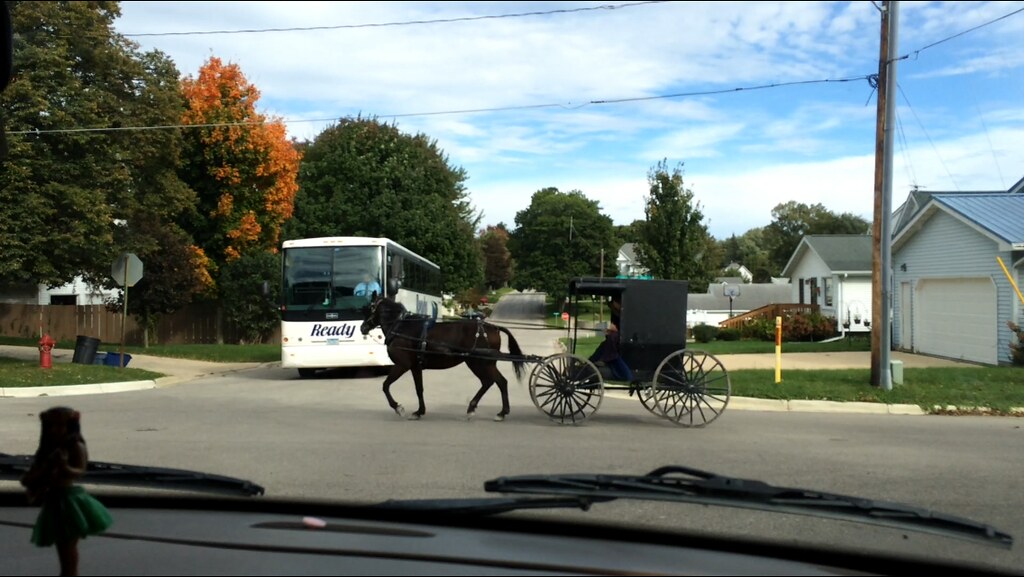 While in Iowa we drove to the mighty Mississippi River. It was bigger than we expected and the area has flooded recently so the Mississippi was 8ft higher than normal! It was hard to comprehend that amount of change over such a wide river. Islands were now just floating tree tops with bald eagles sitting atop branches. We crossed into Wisconsin and drove through the rolling countryside and past lots of grazing cows. 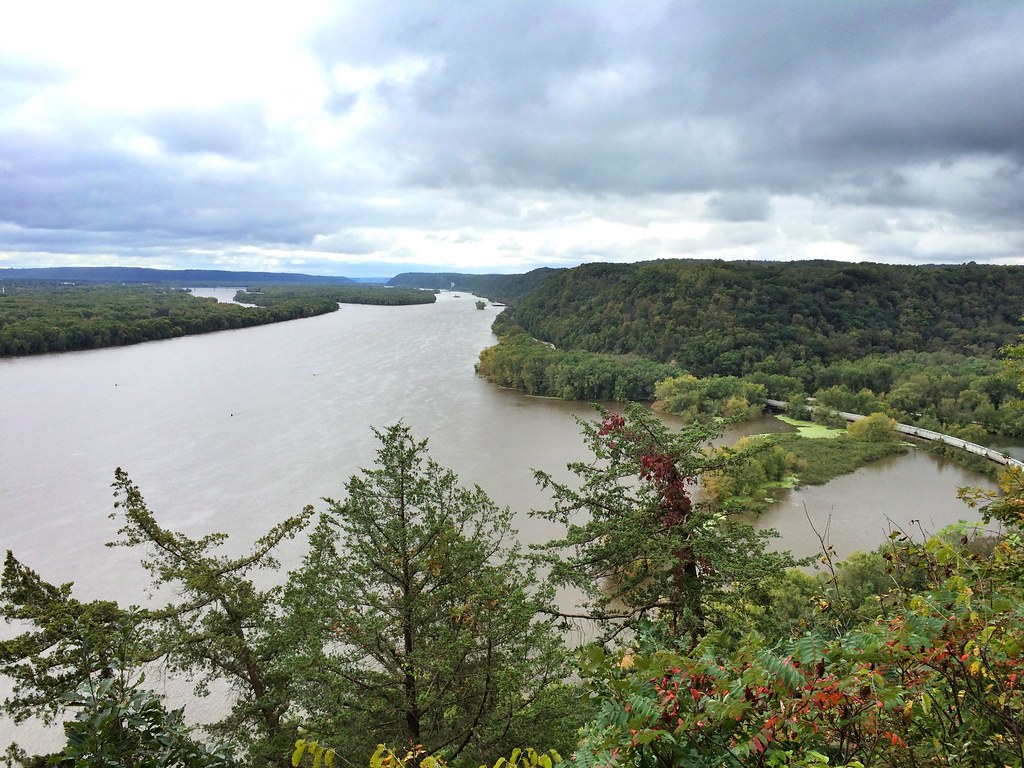 When we reached Illinois we found that they had free state parks so we ventured east to Matthiesson State Park to stretch our legs. We wandered up a sort of mini canyon with numerous small falls and stepping stones. It was nice to see clear water after a week of muddy rivers. 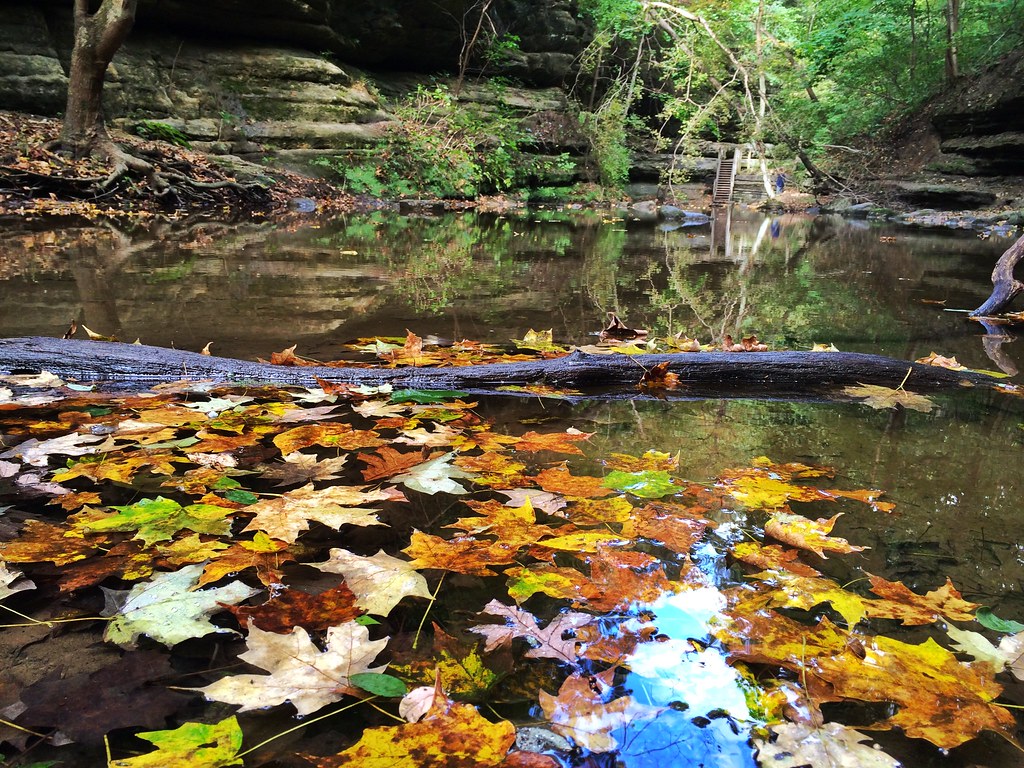 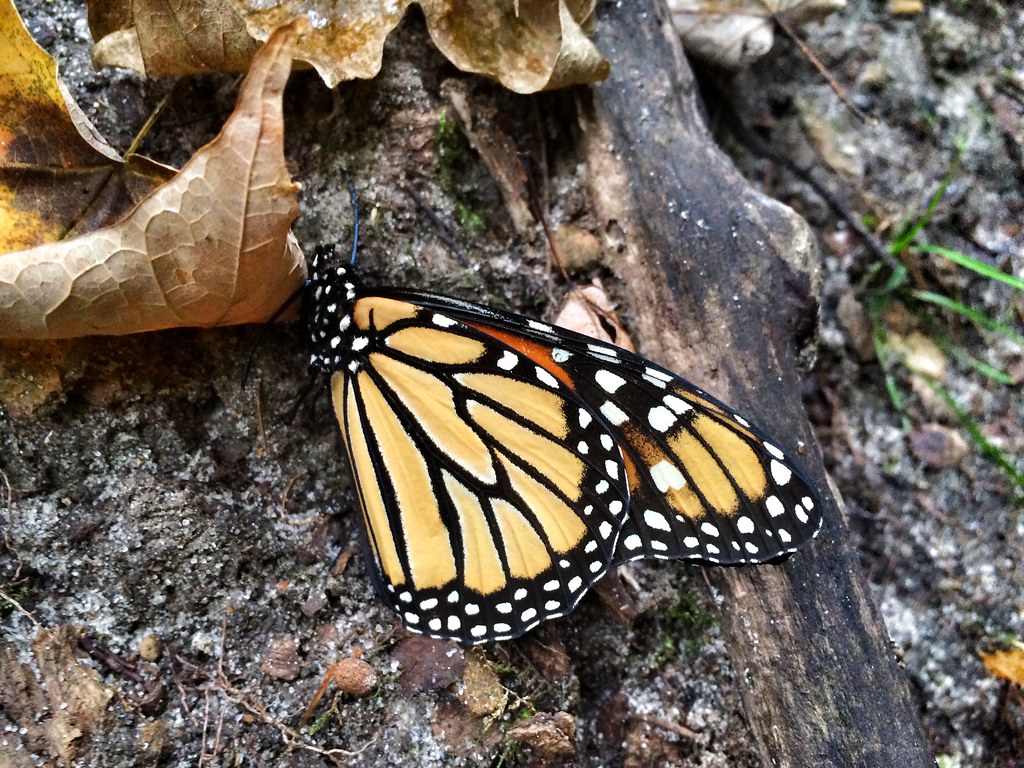 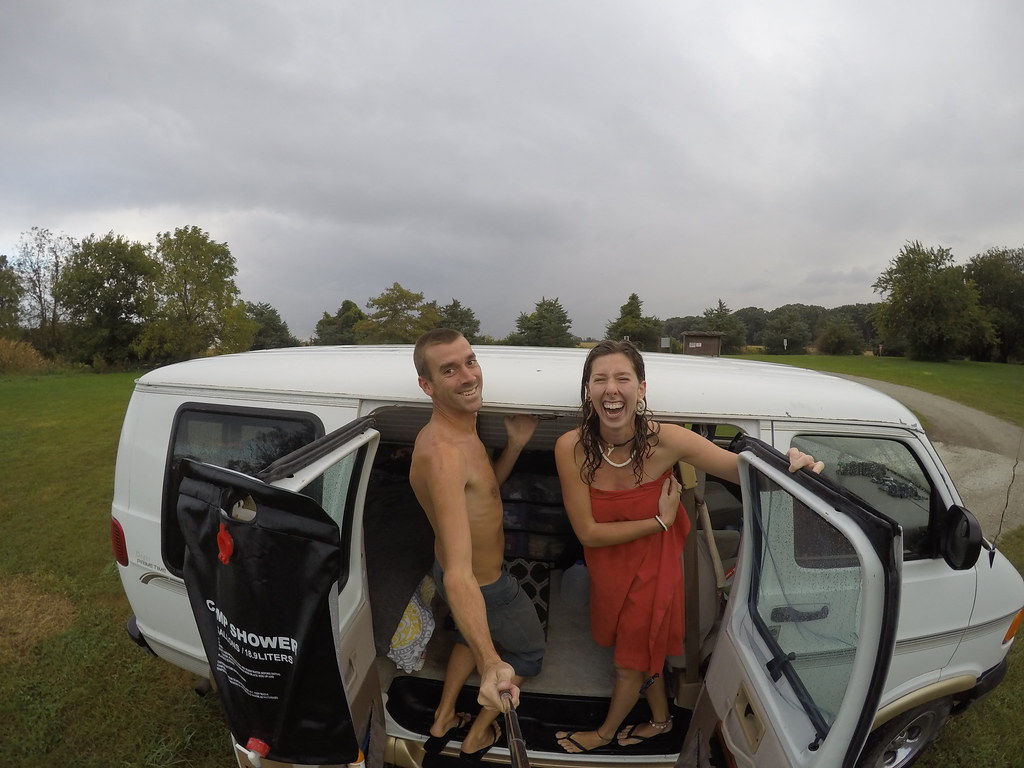 The days began blending into one as we crossed through so many states. One day we stopped at a busy gas station and overheard a conversation to our left. A guy approached the man infront asking if he’d really driven up from Florida and was all ‘hey ho’ and “yeaaaah that’s awesome man!” Craig and I slowly turned our heads in unison like we were possessed by the devil. Then Daphne began flashing her lights and swishing her windscreen wipers to get attention from the men ‘look at me! I’ve driven down from Alaska!’. No one even noticed her and her unique plates. Normally we’ll be sitting inside Daphne and hear people walk past and say ‘Alaska!’ and a few people take photos oblivious that we’re inside. And when someone says ‘Alaska’ they always say it with such enthusiasm, so Craig and I can’t help but keep saying it out loud “Alaaaaaskaaaa, ALAAAAASKAAAA!” getting more enthusiastic every time – just like Alex Supertramp does in the “Into The Wild” movie. 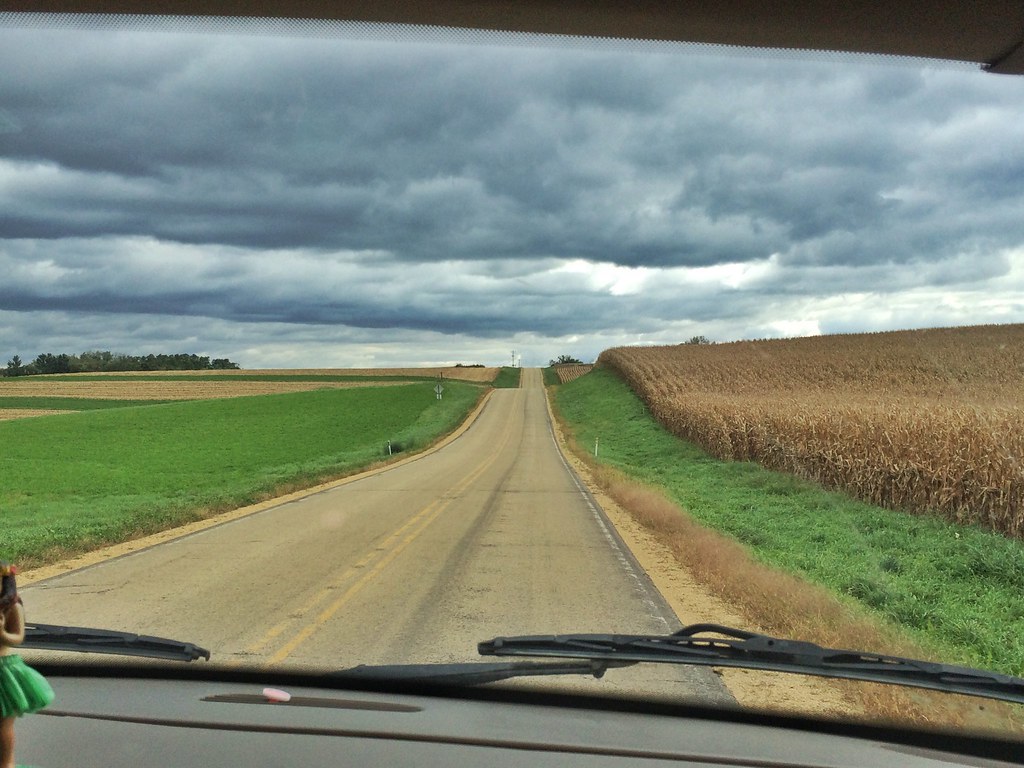 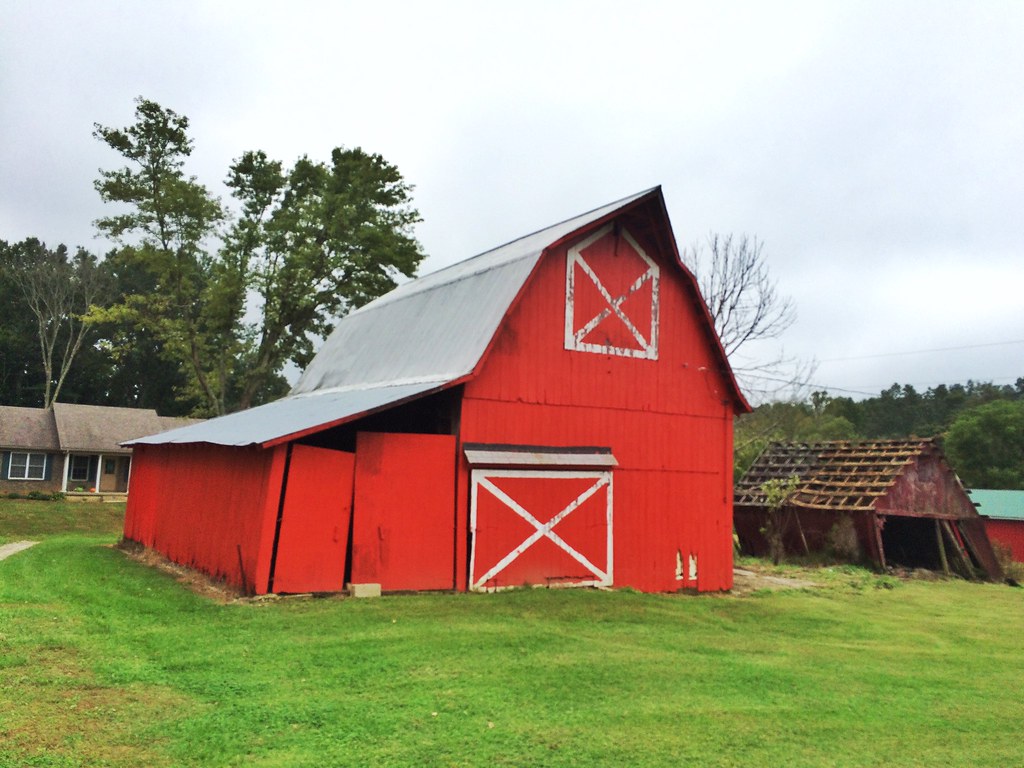 Another day we stopped at Burger King for an ice cream. I headed in and came back empty handed, the doors were locked at 2pm! I hoped back into the car ready to leave and then two men exited Burger King and Craig thought I was trying to ween him off junk food…”back you go Lauren”. Turns out the wind was so strong that I couldn’t even pull the doors open! How embarrassing. When we reached Indiana we veered south to check out some of the areas covered bridges. Indiana is the wooden bridge Capitol of the world and we saw a cute one in the tiny village of Bean Blossom. It was a rustic, red structure that crossed over a stream. Nothing really happened after this…we crossed briefly into Kentucky, and to my annoyance too early in the morning to try my first ever KFC, it’s gotta be after 12pm to be eatin’ chicken in my opinion. Then we entered Ohio and shortly after West Virginia. So the dull drive is finally over (no offence to those states we passed, I’m sure you all have lots to offer but the attractions all seemed to be few and far for us. The couple detours we did weren’t exactly riveting and we are happy to say we will now be slowing down again. We’re in the forested hills of West Virginia heading for the Appalachian Mountains to try and catch the autumn colours and give our legs a well needed stretch. Hooray! 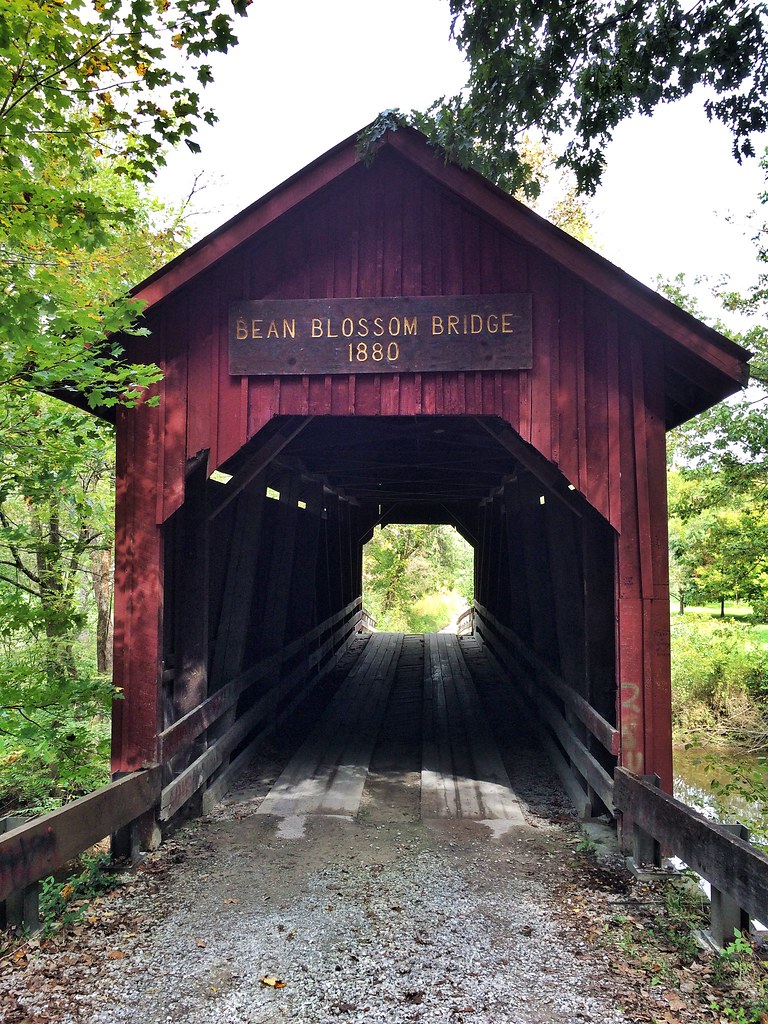