Wall drug store is a place most people stop at on the lonely road through South Dakota. When the Hustead family bought the drug store in 1931 they felt like they’d made a terrible mistake. Business was slow and hardly anyone came off the main highway to their store. When they were close to giving up five years later Dorothy had an idea on a stinking hot summers day. They put signs up along the highway advertising free iced water and the signs worked a treat. People have been visiting Wall Drug ever since and can receive up to 20,000 visitors on a good summers day. 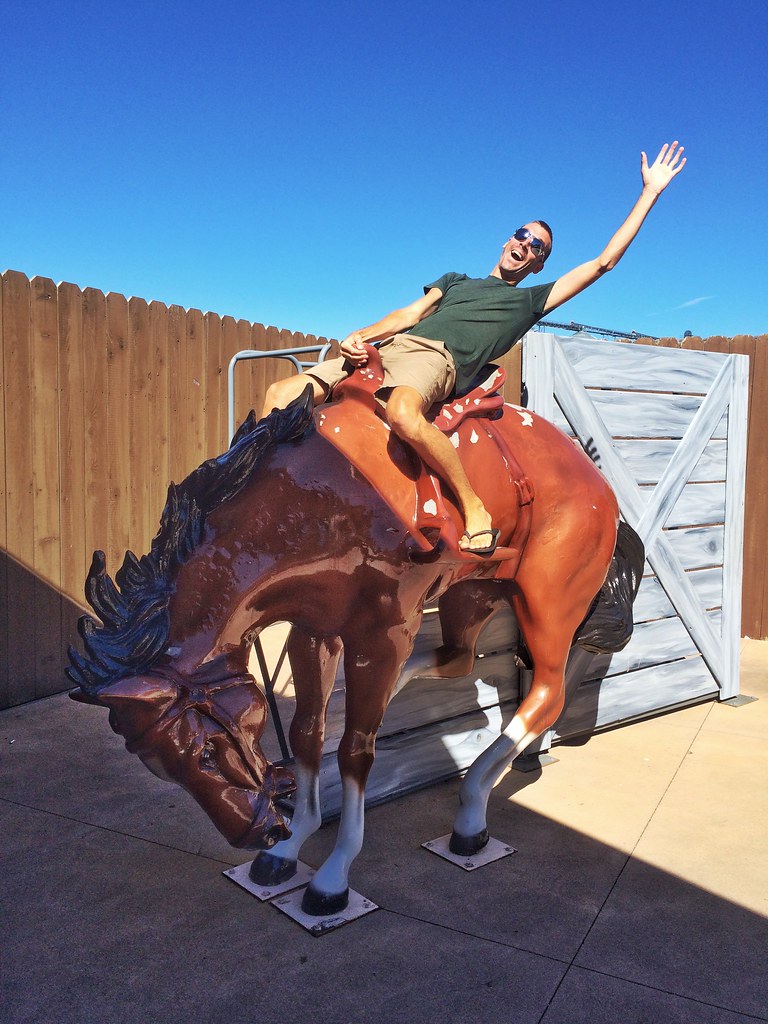 It was a bizarre place containing a mini wild west town, arcade rooms, cafe, souvenir shops, giant roaring dinosaurs…you name it, they probably had it. They also had 5 cent coffee so we grabbed a cup and wandered around. Enticing us in with cheap coffee certainly worked as we ended up spending a few dollars on souviner pressed coins, a shoot out arcade game where my gun didn’t even work and getting my fortune told by Zoltan, who’s eyes shifted awkwardly from side to side and he sounded distinctively Russian but was dressed up like a character from Aladdin. 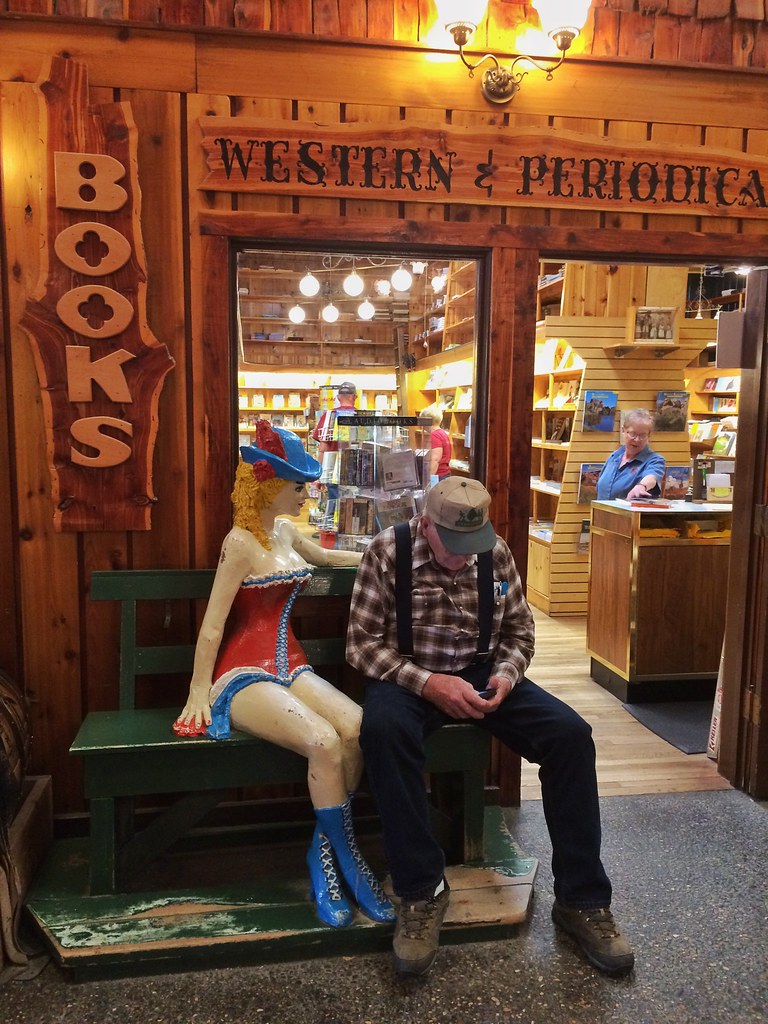 We veered off the highway to visit Badlands National Park. A scenic road ran right through the park and we passed a large group of bighorn sheep straight away. The badlands were colourful hills and ridge-lines layered behind one another. The scenery was pretty spectacular and a complete contrast to the flat prairie land we’d been driving through. We climbed up some hills along the road but the wind was so strong that we couldn’t make it far. As I went up a steep ridge the wind actually pushed my legs from beneath me and I nearly slipped off the edge. 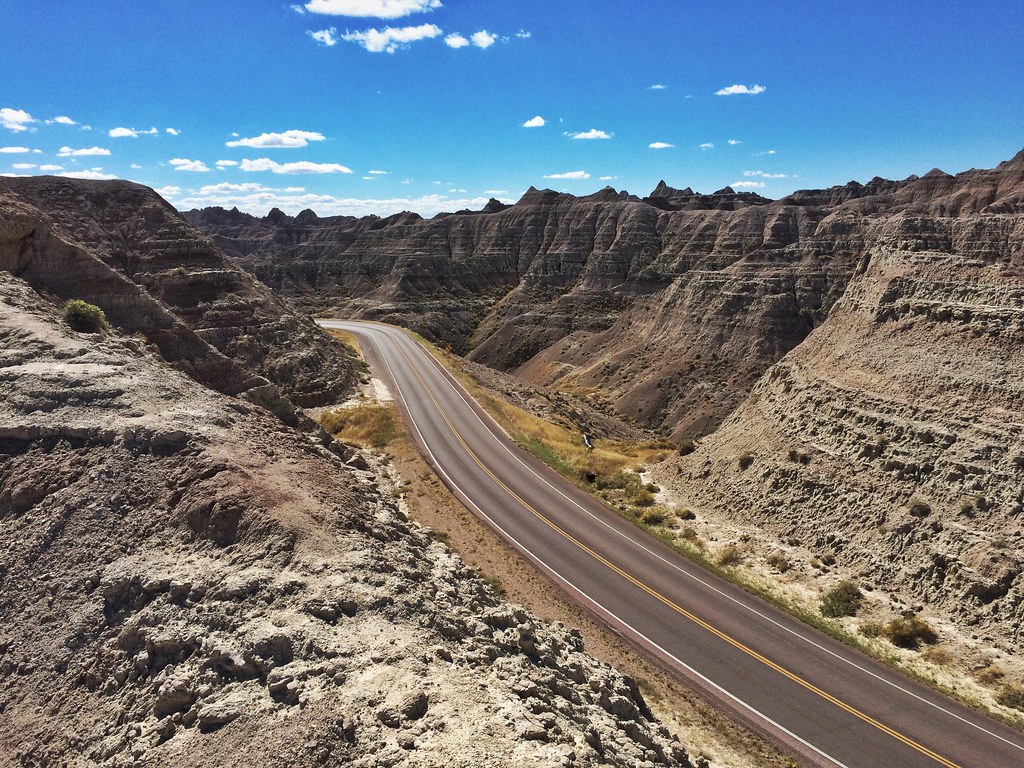 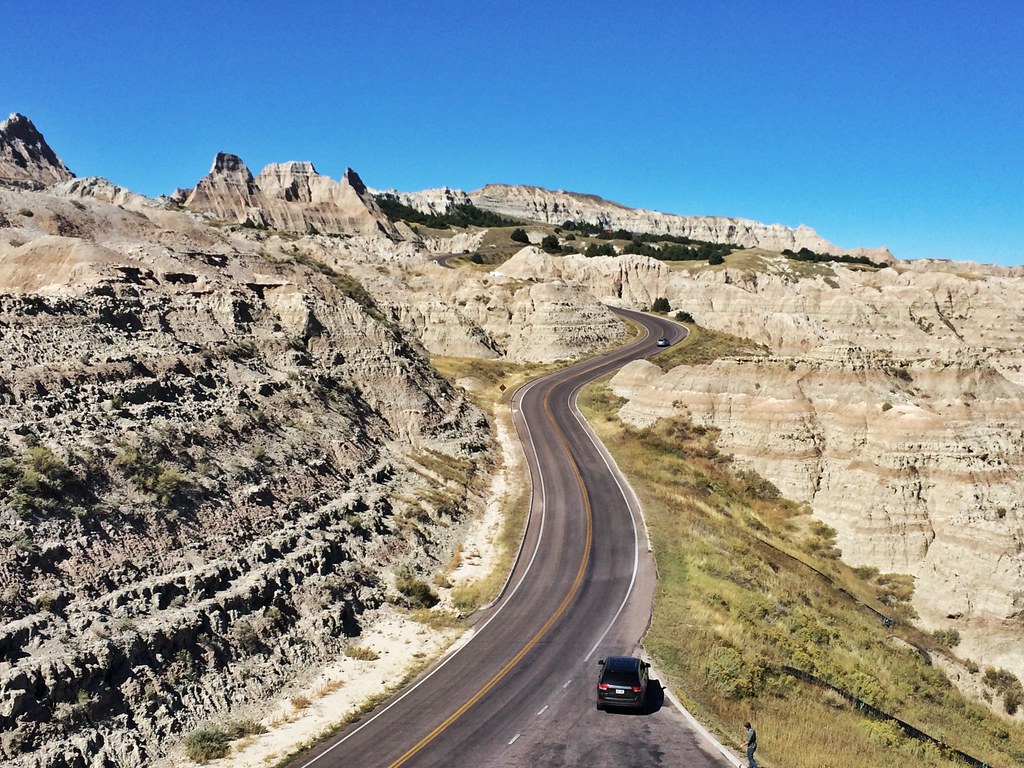 We continued to a really colourful area where the hills were pink and yellow and further east they became much more dramatic like spiky mountains with ridges as thin as paper. Pink lines crossed the hills like someone had walked along painting a straight line across them. We waited around to watch the sun sink down and change the colour of the hills but it dipped behind a cloud on the horizon. 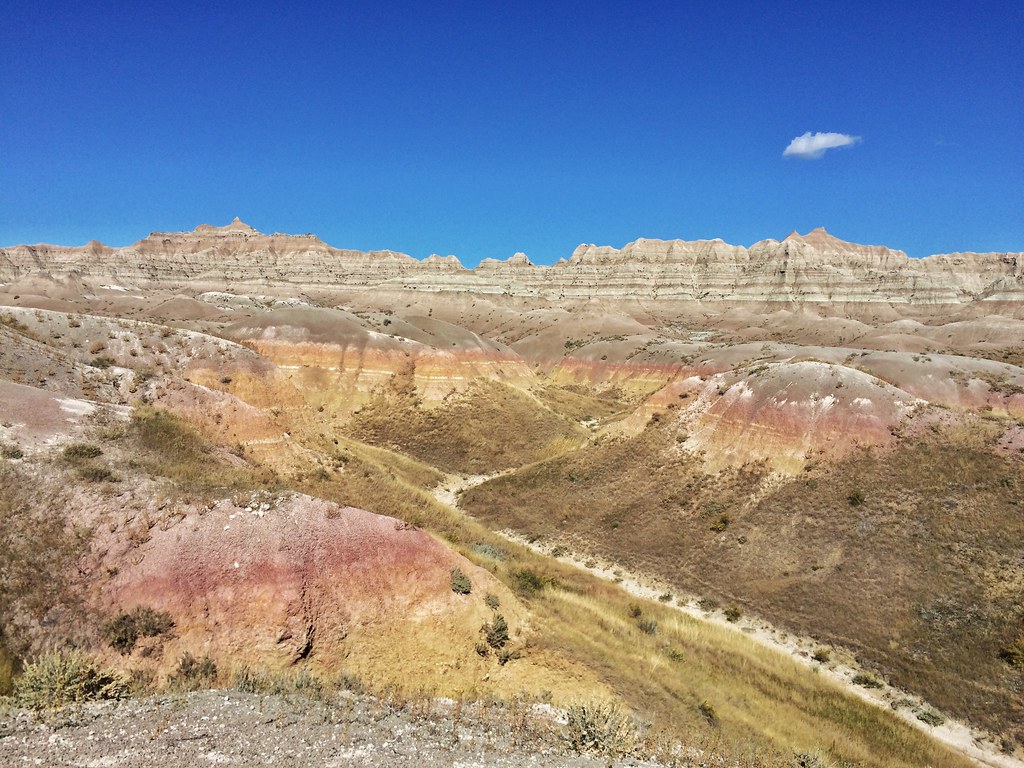 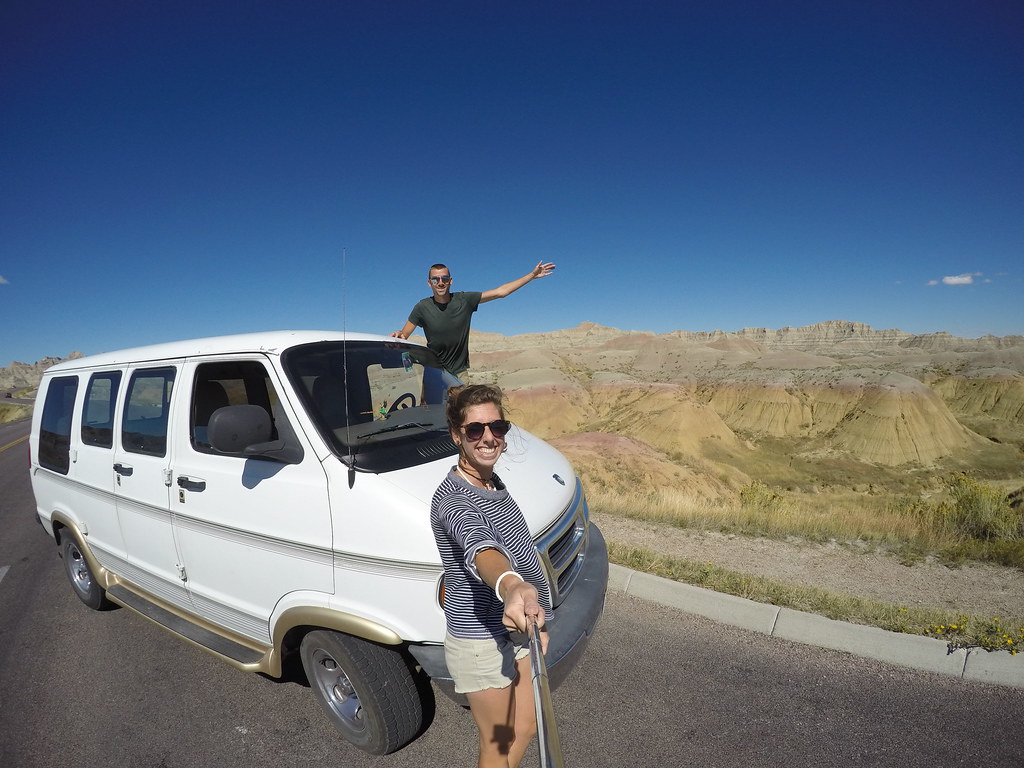 The next day we stopped at the nearby Minuteman Missile National Historic Site. South Dakota is a major base for nuclear weapons and under the flat prairie land is lots of hidden bunkers which played a big part in the Cold War. People working in the bunkers were usually inexperienced 20 year olds left in charge of pressing a button and changing the world forever. We were delighted to find a table full of cake as we entered the visitor centre. Before I stuffed my face I quickly queued up to try and get us a place on a free tour. The rather monotone worker told me they only had afternoon tickets left so I was gutted as the morning ones had already gone by 9.30am. Just to rub salt into the wound he said “I gave the last tickets away just 5 minutes ago, actually it was more like 2 minutes ago” I flared my nostrils in annoyance and walked away, restraining myself from flinging a wedge of cake in his face. Another ranger came into the room with more cake to add to the table so I asked what the occasion was and he said “yesterday was our grand opening…ah you missed it! It was AMAZING”, so that’s two things we’ve missed out on! He was a really chatty man with a great sense of humour. Maybe he was gay, or just very jolly, I don’t know but he was hilarious, encouraging me to basically fill my boots with cake. We had a good old laugh and then he declared that he loved his job “except for having to work with Zoltan over there” and we both looked over at Mr. Monotone staring into space at the desk. When the jolly man heard we were heading to Florida he said we must visit the ‘fountain of youth’ or something like that, we didn’t know what he was on about so he explained that a man went there claiming there was a youthful fountain and he put lots of plaques on trees nearby which are still being found to this day. The man however just vanished off the face of earth and no one knows where he is. So I said he’s probably a 6 year old boy running around the forest now and Mr Jolly was bent over laughing.

We couldn’t go on the tour but the visitor centre was full of displays and for someone like me that finds history boring, they made it very interesting! There was a vintage tv with old adverts showing what to do if a nuclear missile hit, the theme was ‘duck and cover’ and it was shown by a cartoon turtle hiding in his shell with catchy jingle and phrases like ‘Find a hole and make like a mole!’. They then showed clips saying ‘this family knows what to do’ and they’d all drop to the floor and cover their faces with a bit of newspaper. I don’t think newspaper would cut the mustard in a situation as dire as a nuclear missile.

I particularly liked a board showing the very close calls America has had over the years. In 1983 a soviet named Petrov chose to ignore an alarm indicating a US nuclear attack was underway. He reasoned that the US would never launch just 5 ICBM’s (inter continental ballistic missile), it must be a false alarm. He was right, sunlight had reflected from high altitude clouds and triggered the system. Petrov is now known as ‘the man who saved the world’. In 1979 a computer indicated a Soviet-sub launched a missile attack, and then a ICBM launch was underway. Bomber crews ran to planes and Minuteman Missile operators were at the ready but it was soon discovered that a tech had inserted a training tape simulating a soviet nuclear attack! Interestingly Russia has never declared its close-calls but people say the area where they store the weapons is one of the most polluted places on earth. We grabbed a couple slices of cake to have with afternoon tea. It was delicious…why didn’t we fill our boots?! 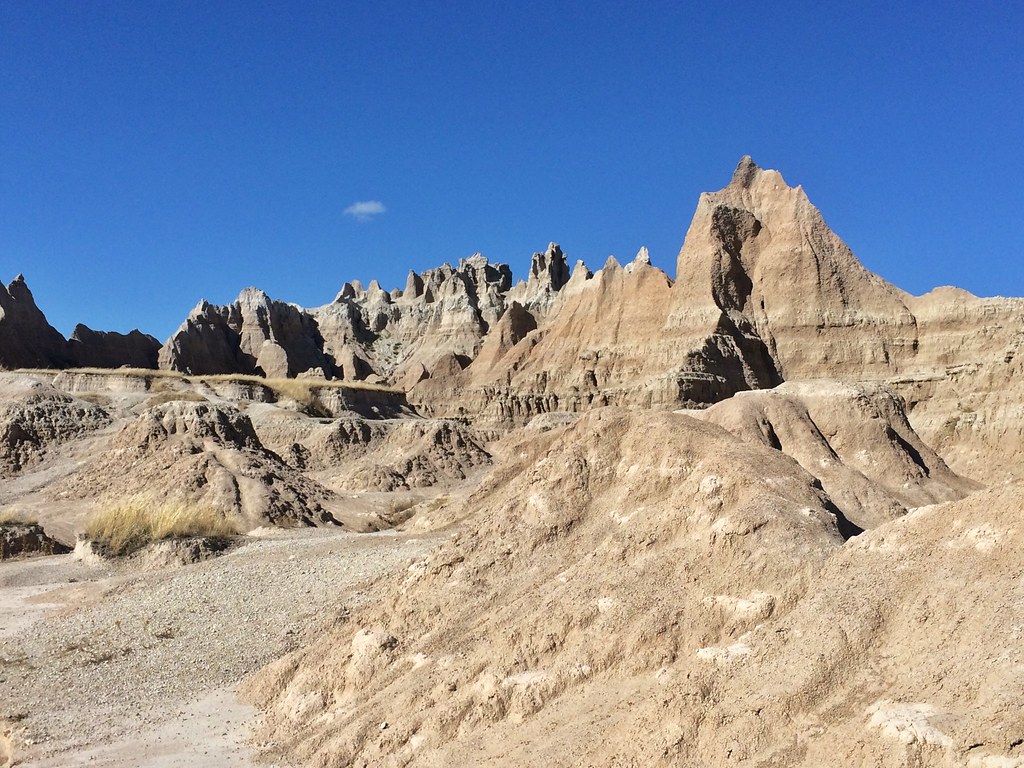 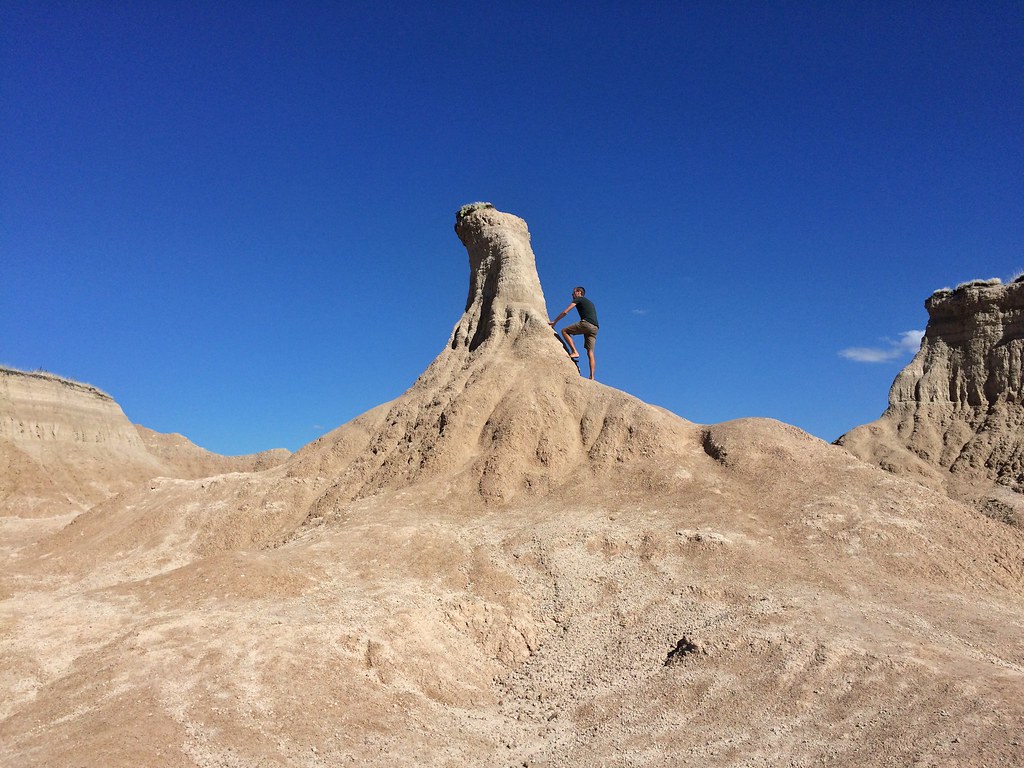