Set amongst the rolling hills of West Virginia is a little slice of India, and what some say is the Taj Mahal of America. A wiggly, hilly road took us past farm houses where the American flag swayed in the wind and shortly after we arrived at the majestic palace. Swami Prabhupada was the founder of the Hare Krishna way of life and one of his disciples acquired a piece of land near Moundsville with nothing on the 133 acres but a old barn. His followers decided to built him a home on the land and Prabhupada established New Vrindaban, the first International Society for Krishna Consciousness community. The plans began as a basic building and most of his followers doing the work were young with no building skills so they read up on how to do everything themselves and their plans became more elaborate. Prabhupada passed away in 1977 with the palace still incomplete so the followers decided to make the Palace of Gold a monument to him. 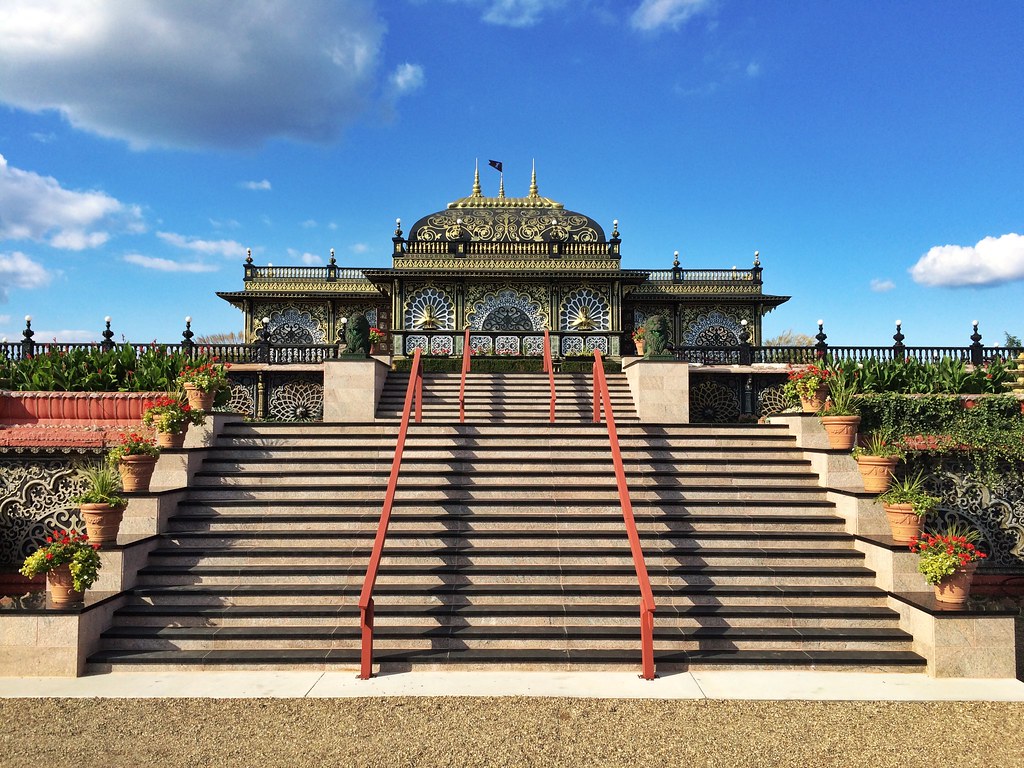 Parts of the building were being renovated on our visit, we were quite shocked to see the new wall around the complex being built with polystyrene…quite the budget Indian approach we thought. And such a shame as its a terrible polluter and the floor around the wall had thousands of tiny polystyrene balls. Anyway, inside the complex was delightful! The palace was stunning and covered in intricate patterns and with a big domed roof. Vibrant flowers lined the walls and forested hills were everywhere we looked. The sound of traditional humming or singing came from the palace and we felt like we were back in India…without the smog, filth and poverty. We popped into the entrance of the palace and felt like we’d stepped inside a multicoloured disco ball. All the walls were covered in stunning stained glass windows with peacocks and flower patterns. We could peak inside where the ceiling was mirrored so the kaleidoscope of colours reflected through the hallways. 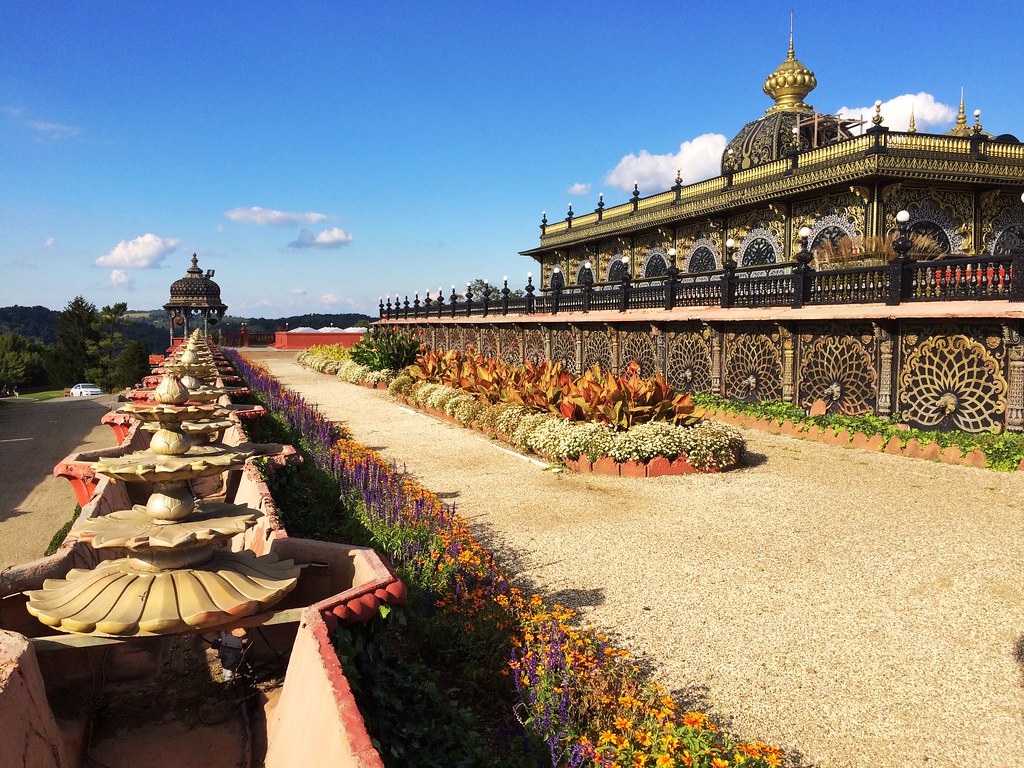 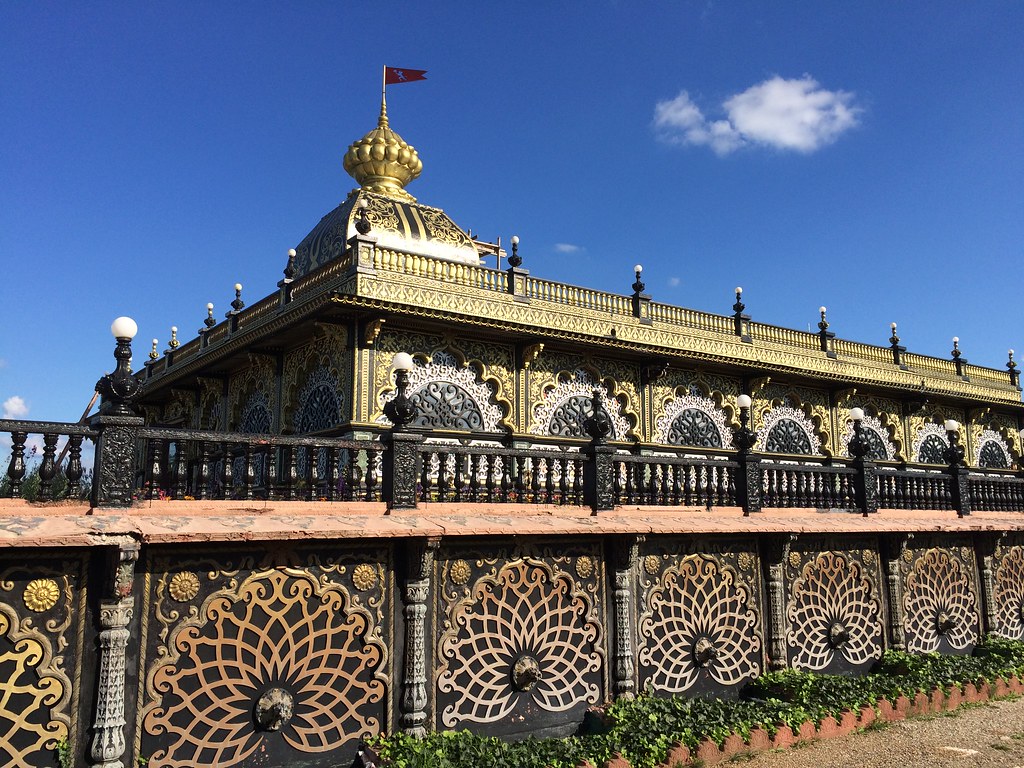 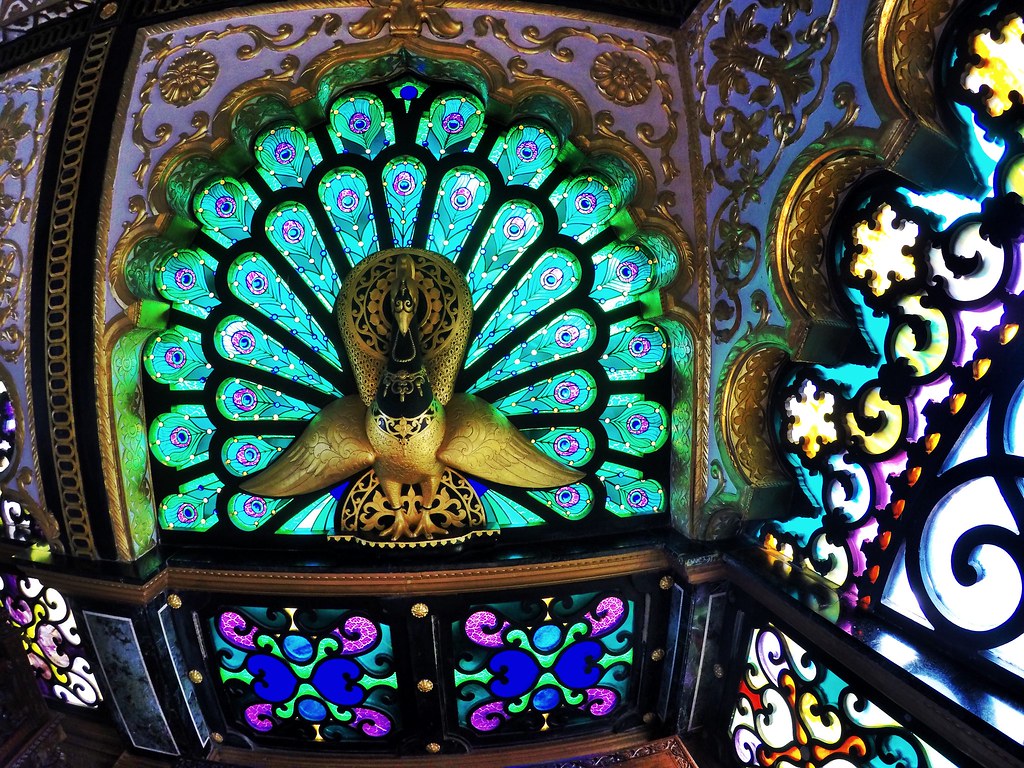 A trail led down to the rose garden with a water fountain, tweeting birds and a variety of blooming roses. We wandered down the road, past a lily pond and to the cow pen. Indians love cows. The holy cow. It’s a Hindu god and also a much loved animal for Hare Krishna’s. The schedule for the Hare Krishna’s involved milking the cows twice a day as well as a ceremony to celebrate the cows. Too damn cute! Their schedule also had an 1 hour 45 minutes of chanting the Hare Krishna mantra, which goes like this for those who don’t know: ‘Hare Krishna, Hare Krishna, Krishna Krishna, Hare Hare, Hare Rama, Hare Rama, Rama Rama, Hare Hare’ over and over again for nearly two hours every day. 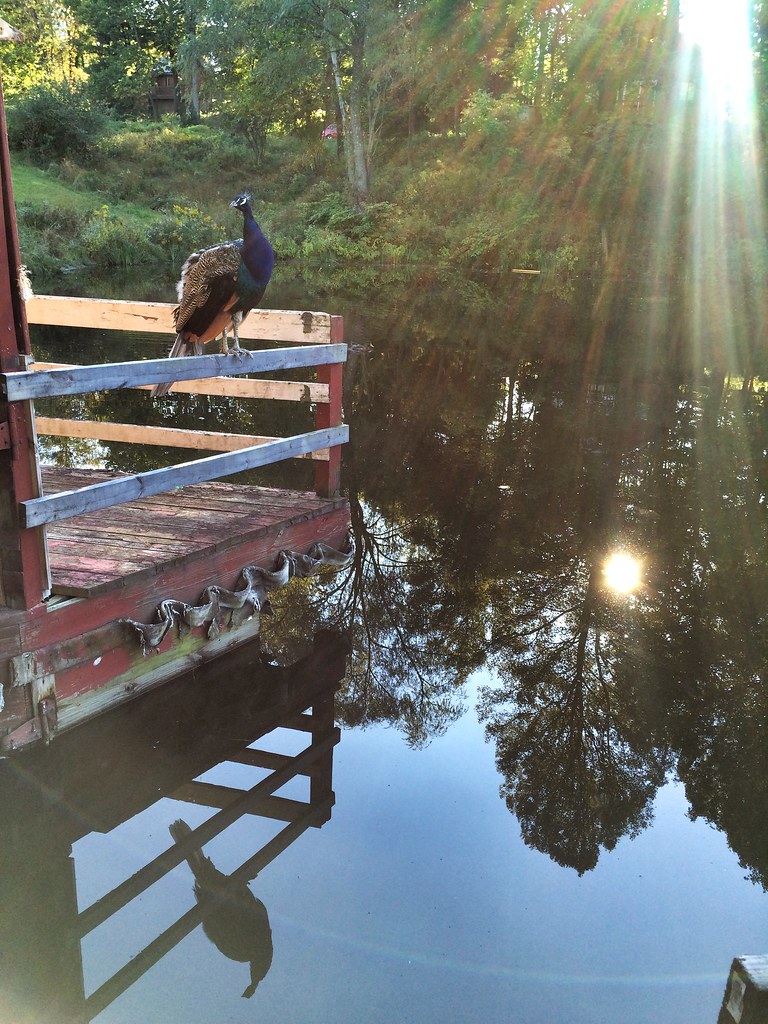 The Hare Krishna temple was down the road and had a large room with elaborate deity statues covered in gold and eye popping colours. There was also a statue of Swami Prabhupada himself sitting on a chair and it was so realistic I felt like he was right there. We enjoyed a stroll along another pond, passing a giant cow and elephant statue. Inside a pavilion style building on the waters edge were half a dozen peacocks. They had bright blue necks like blue ink but none of them unveiled their fancy fanned feathered derrières. 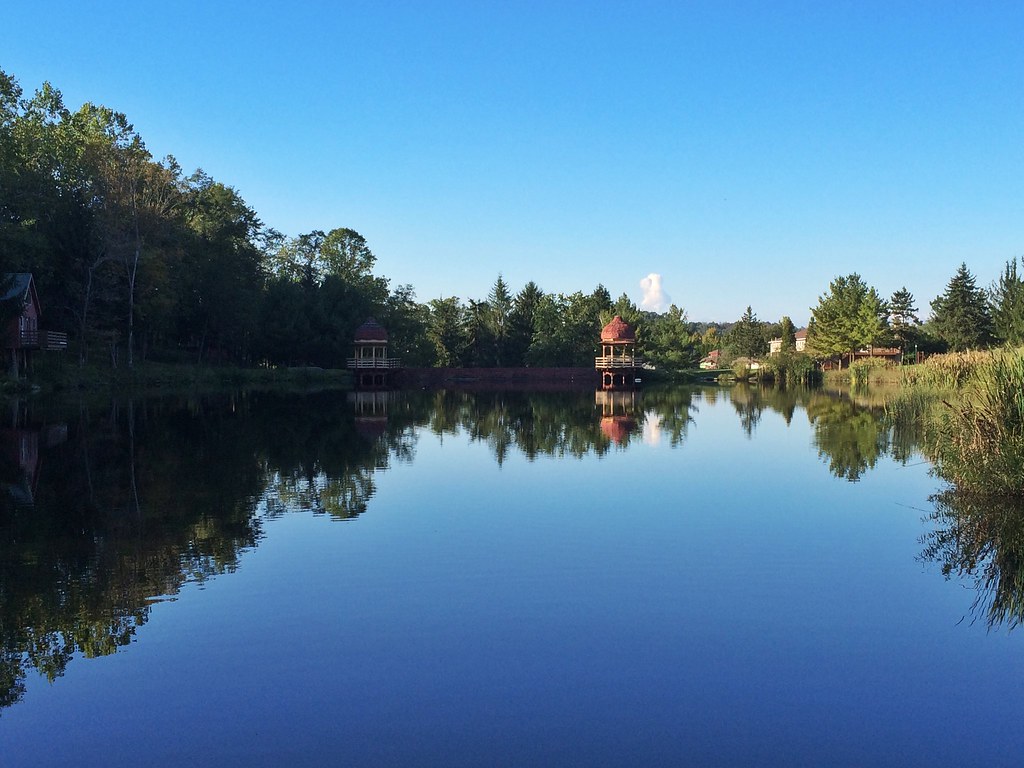 It was such a tranquil place that we decided to stay up in the top carpark, it certainly beat another night in Walmart. Hare Krishna’s don’t eat meat, onion or garlic so we didn’t want to eat or prepare anything near their complex that they don’t allow and we realised that almost every meal we cook contains onion and garlic. Packet mashed potato and baked beans did the job though. We had a view of the pond and hills and a swing chair was right by us. Craig went to sit on it and came back saying he wasn’t allowed, a sign said ‘Please do not sit on the swing chair, Shri Shri…(name I can’t remember) will be having the first swing on Friday, Hare Krishna’ I laughed because Craig really wanted to sit on it but he couldn’t because he didn’t know if it was the Friday gone or the Friday coming. We had a peaceful night sleep and woke to a sea of clouds below the hills. 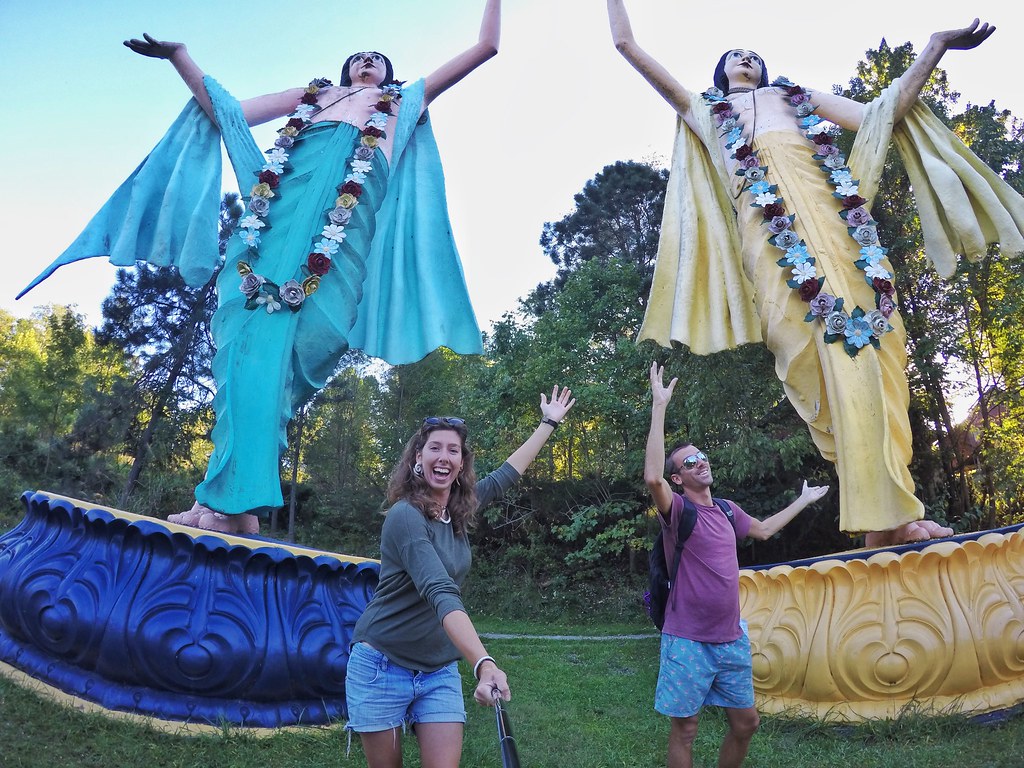 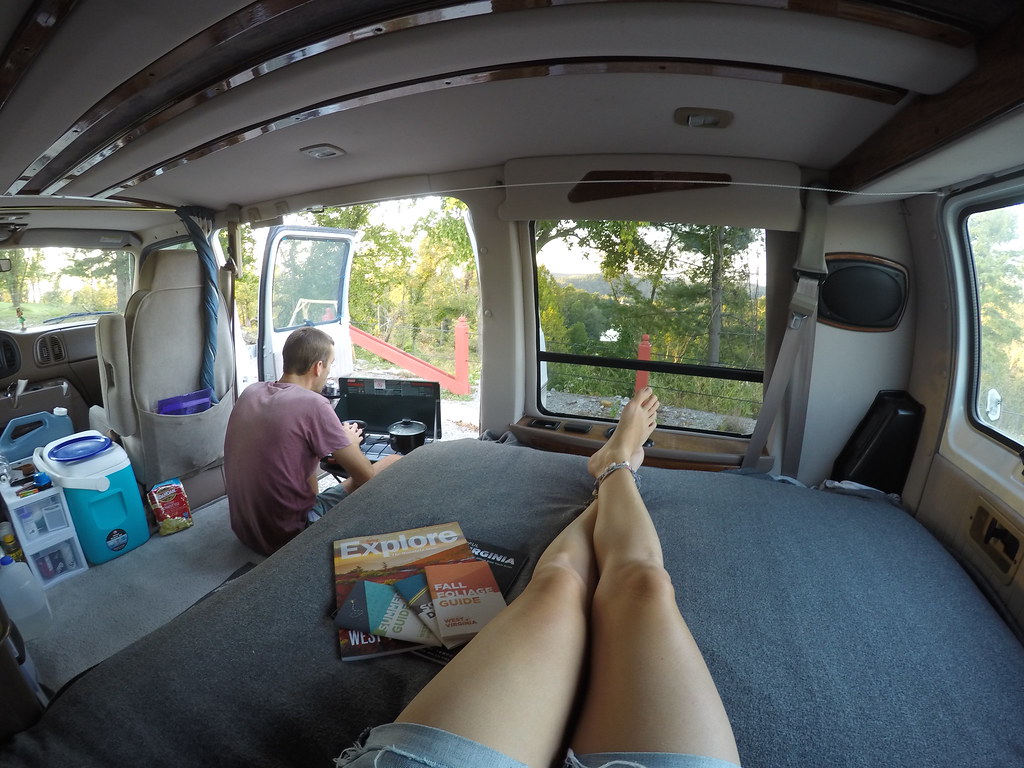