The Custer State Park sits in a beautiful area of the Black Hills and has some very scenic roads through it. We reluctantly forked out the extortionate 20 bucks entry and headed to Sylvan Lake which was quite unique with lots of boulders in and around it. We enjoyed a paddle past the rock formations and braved a refreshing dip in the rather murky waters. 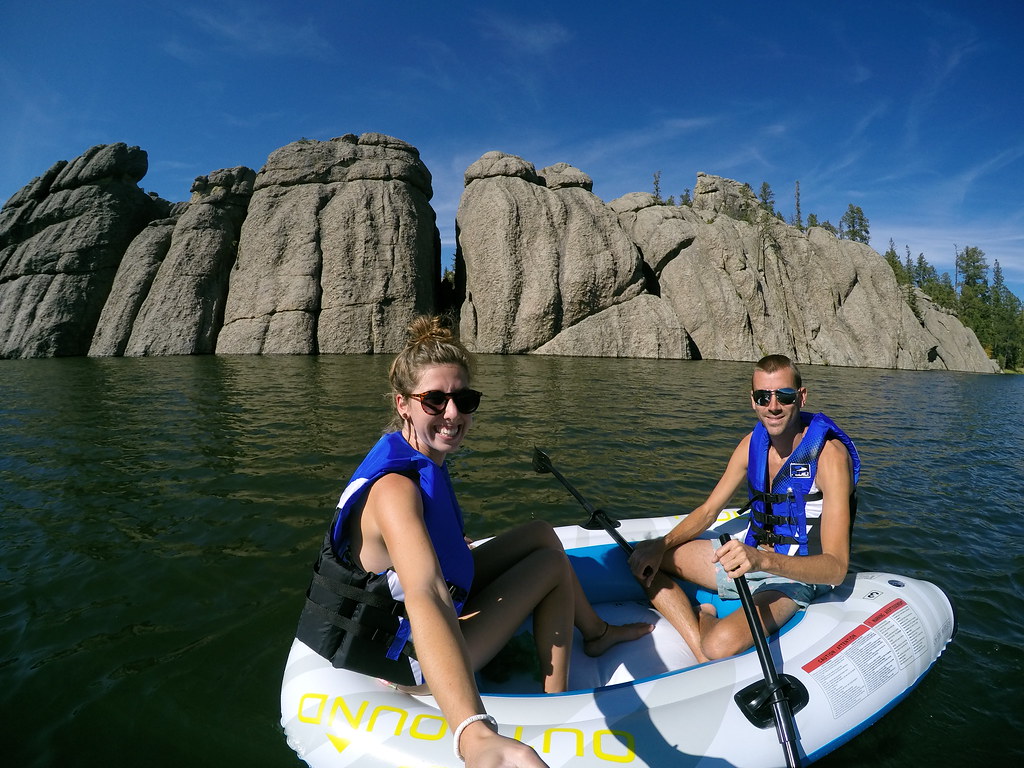 The next day was cloudy and misty, it was certainly not a good day to hike up a mountain but alas we were heading up to Harney Peak which is the highest point east of the Rockies and west of the French Alps. It was the easiest mountain we’ve ever summited and had a very gradual incline over 3 miles. At the summit was an old fire lookout tower which looked like an English castle and a spiral staircase led us up to it. I’d like to say the view was phenomenal but all we could see was cloud. It was windy too so fog and clouds just flew past us and were replaced with other ones. 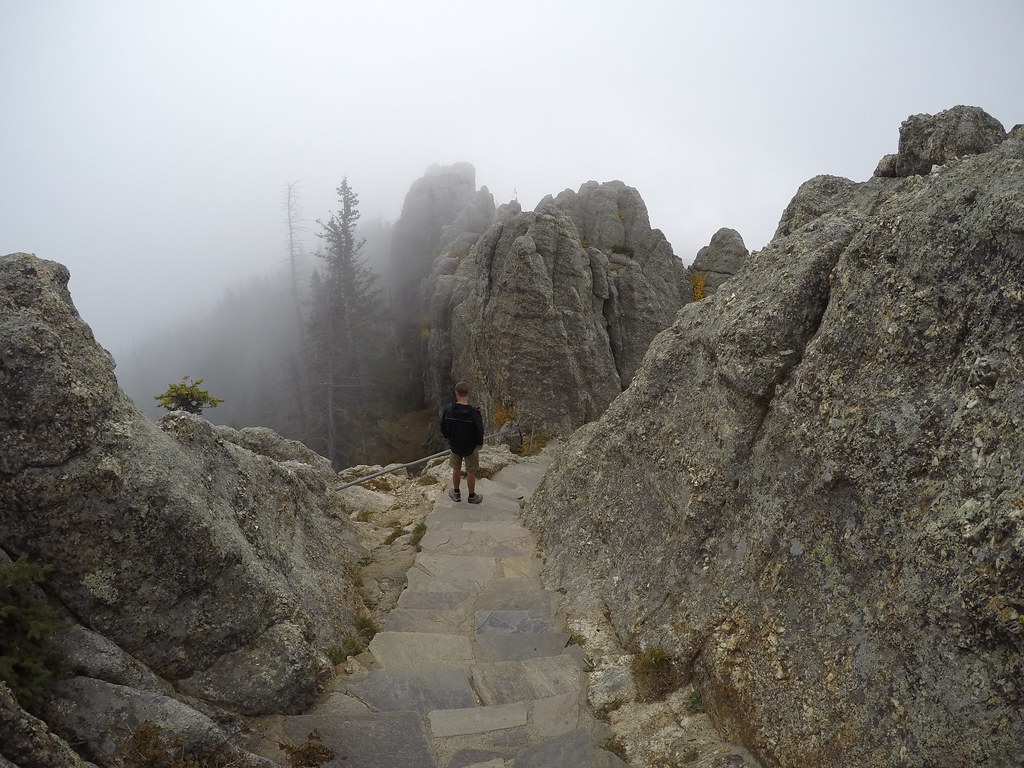 We ended up waiting about an hour for the weather to clear up. We climbed some nearby rocky hills and came across a scary sheer drop. Eventually the sun tried all it could and we got a few glimpses or the rocky scenery around us before giving up and going back to the tower. A steel set of steps led up the tower to a little platform with big open windows which gave me vertigo looking down. People arriving seemed really out of breath, Craig commented that Darth Vader had arrived as a man was panting so loudly, I guess a lot of people weren’t used to the high altitude of around 7000ft but we’ve acclimatised after being in the mountains for a few months. A lady came up to where we were and we had a little chat and then she looked down and asked how to get back down the steep steps. We said we hadn’t been down yet so hadn’t tried and she said “Ok, well if you get to the bottom and find pieces of me then…” and I finished her sentence and said “then we’ll be sure to kick them out the way” and I awkwardly cracked up at my own hilarious joke causing Craig to join in and the lady to say “well, no I was going to say ‘then you’ll know not to go the way I did'” at least I think that’s what she said, it was hard to hear her as my laughter was still filling the tower. 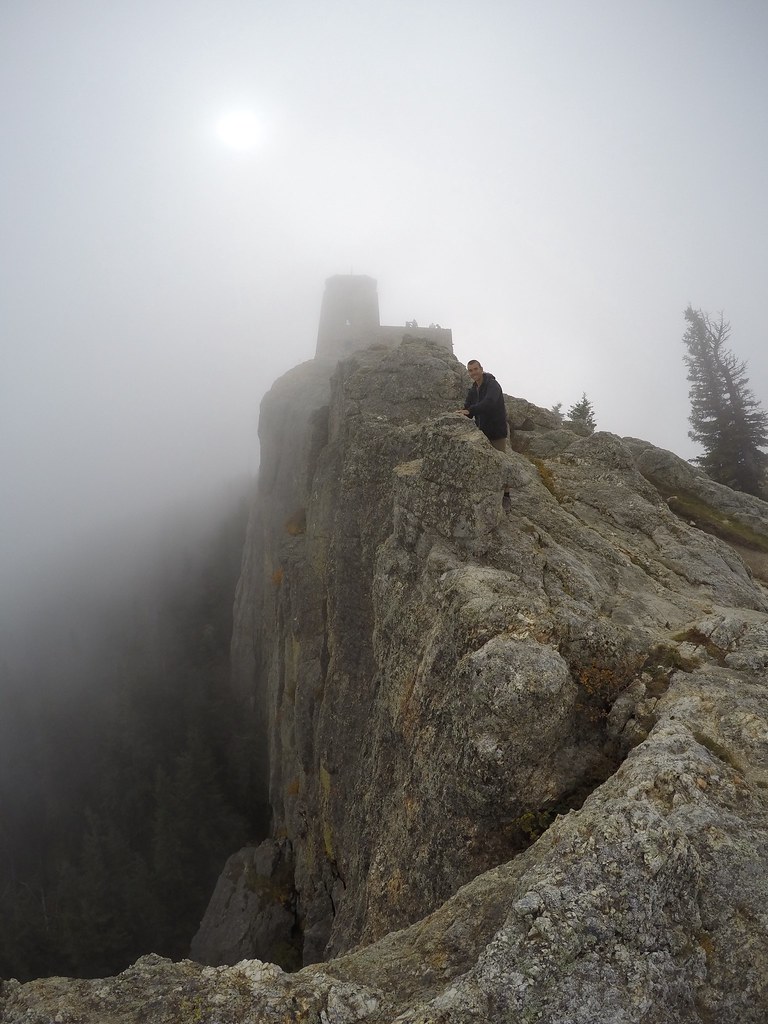 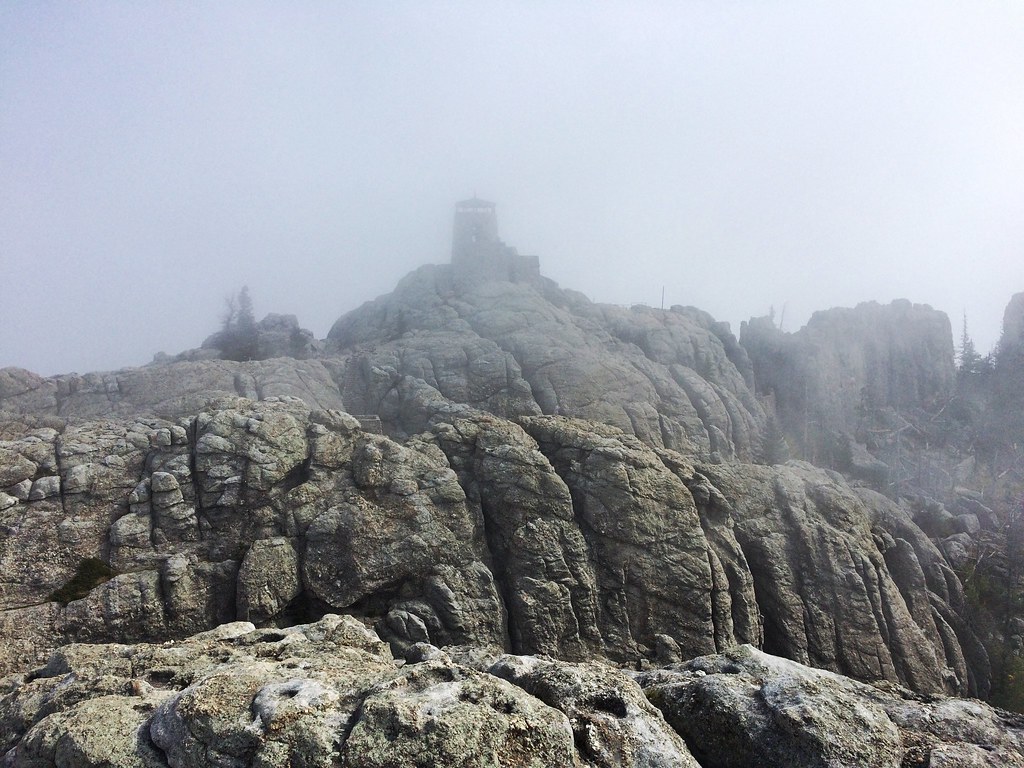 After a picnic lunch by the lake we set off on the Needles Highway. The road led us through a beautiful area where huge needle-like rock formations rose around us and the road seemed to come to a dead end. There was one prominent rock called the Eye Of The Needle as it had a perfect oval hole through it, it was quite a stylised art piece! A big tour bus was there with lots of people snapping photos so we pulled up and noticed the rocks around us weren’t all needle-like, a lot of them were shaped like penises. Im surprised it hasn’t become one of those locations where people trying to conceive come to visit the “fertility rocks”. 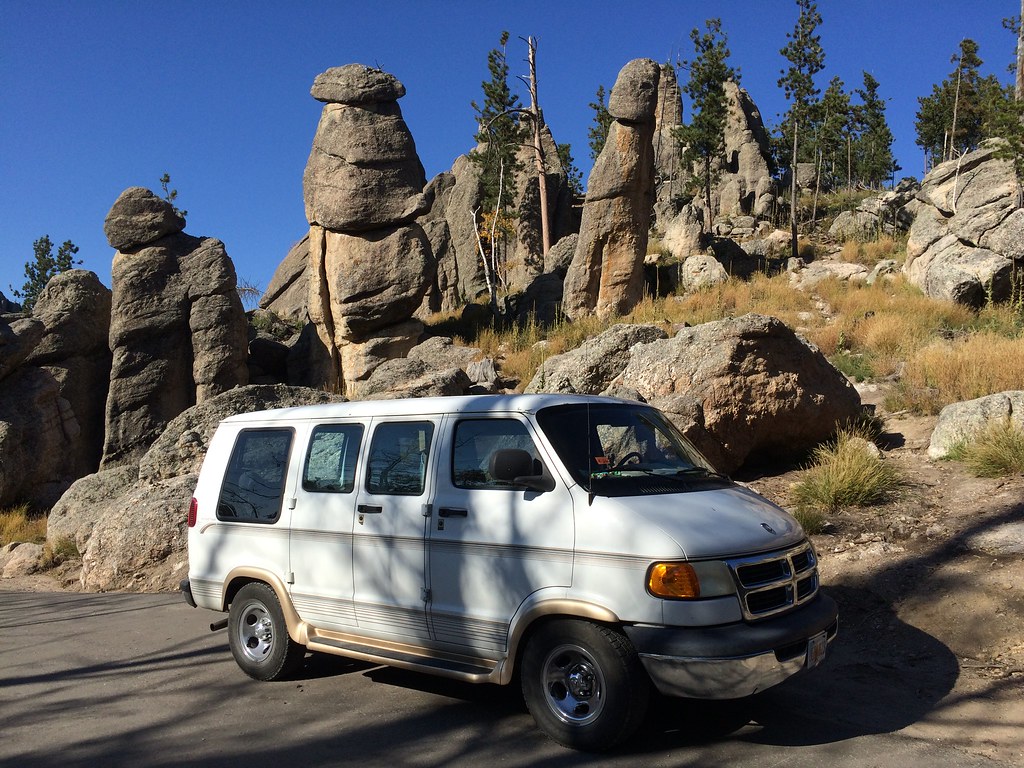 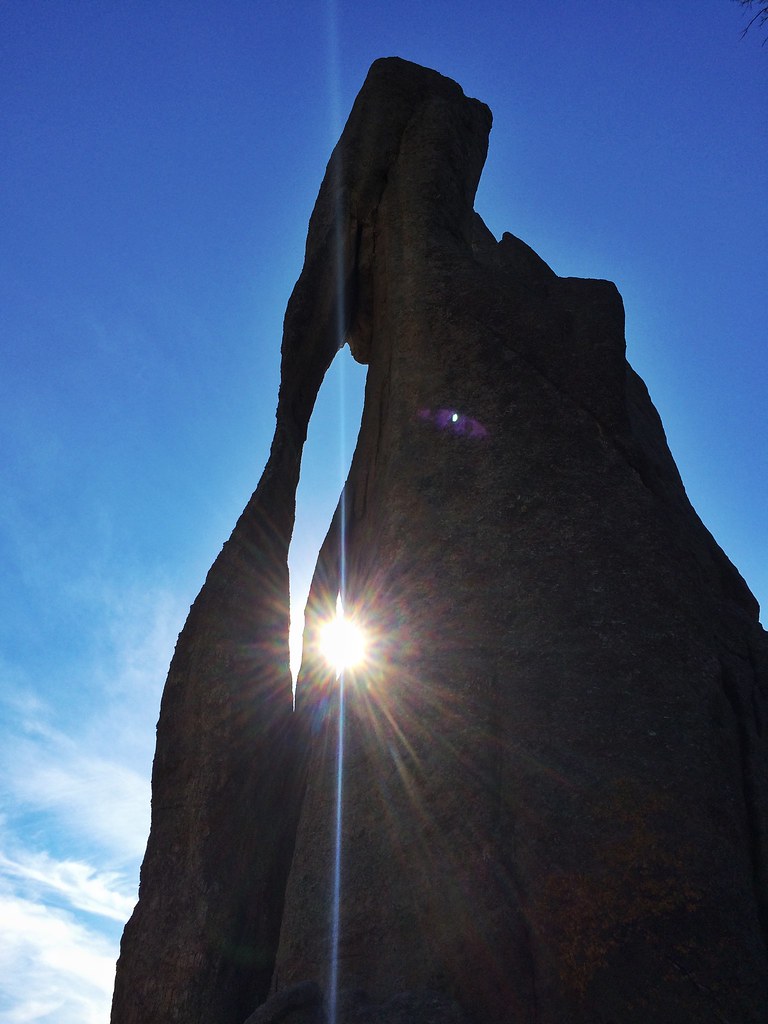 So, the road wasn’t a dead end but actually continued between the rocks and then through a tunnel. It was one-way so we queued up and waited our turn. We began driving through and suddenly had a panic, it was SO narrow that we thought we’d missed a sign saying the sizes allowed through. We hadn’t seen any vans go through, just cars, so we decided to drive through extremely slow incase we heard a scrape and could at least back up. I filmed us go through and the whole video looks like Craigs watching table tennis as he looks from mirror to mirror but we made it and had some people waving at us at the exit like we were the royal family. Some people we spoke to said the next morning they’d driven there and an RV was stuck in the tunnel! They were having to be removed by a salvage vehicle so they must’ve been stuck real bad and they would of been trapped inside too because the doors wouldn’t open. 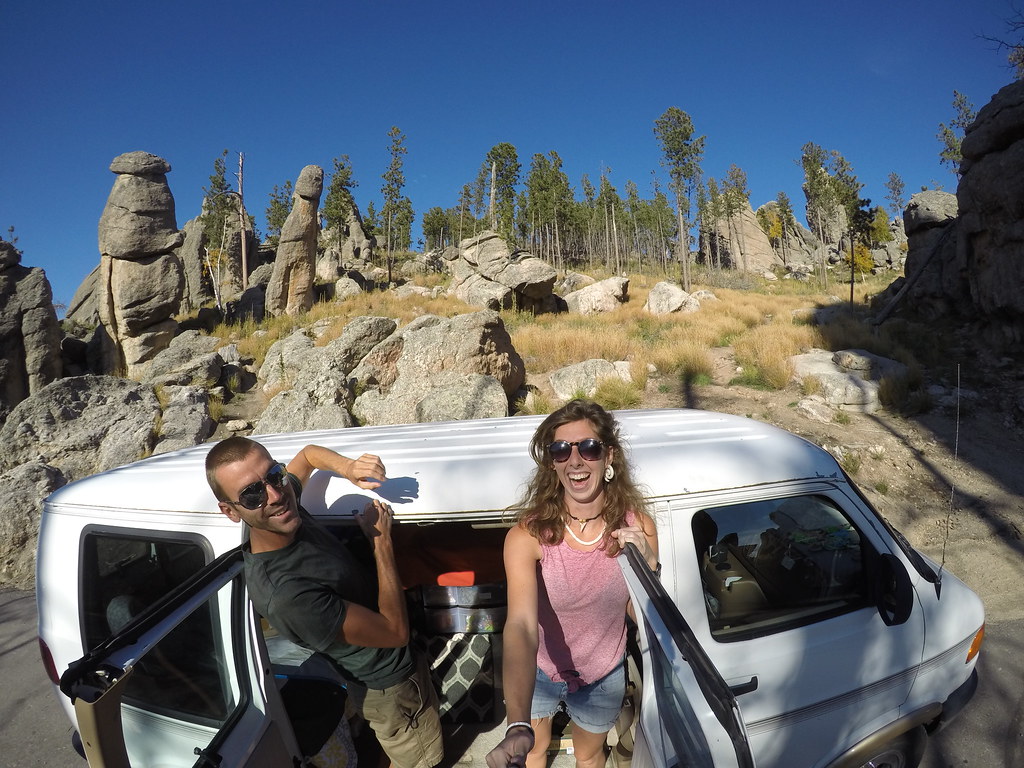 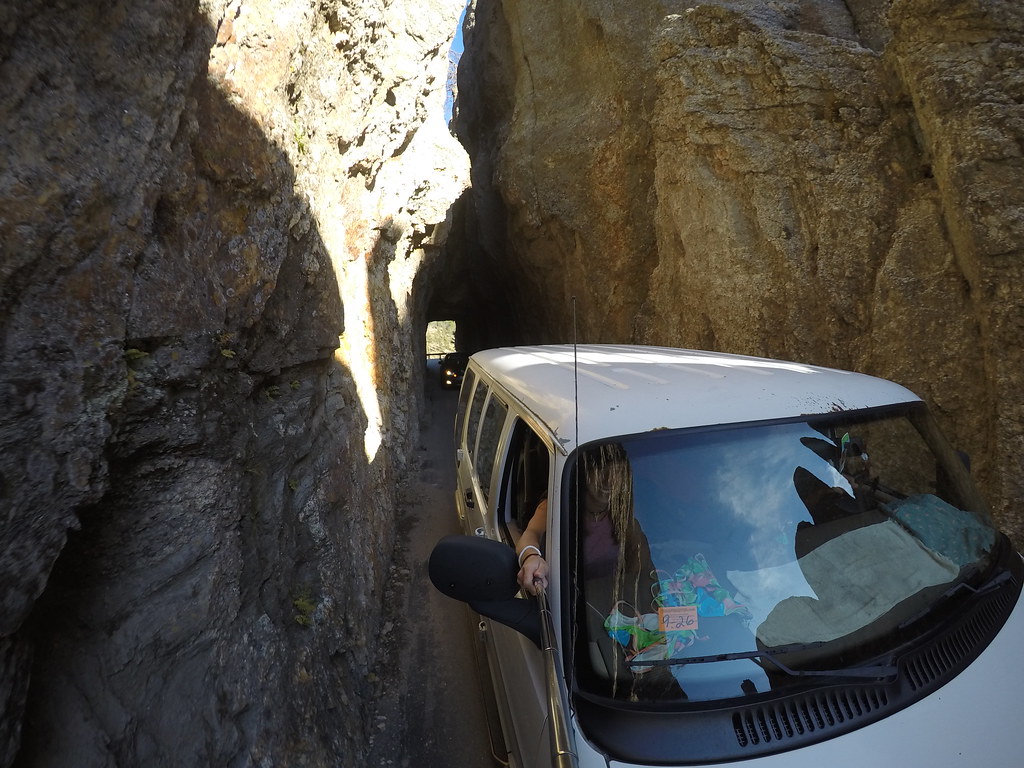 The needles highway was very scenic and I loved the bizarre spiky rocks shooting out the hills. We drove through more tunnels, feeling like experts at it now and continued on till we joined the Wildlife Loop Drive. It’s said to be a great area of prairie land to see abundant wildlife so we set off and ended up being sandwiched between 6 safari style jeep tours. It seemed so stupid people paying for a jeep ride…it cost $50 per person to go along a road which anyone can drive in their own vehicle! They didn’t even have the freedom to stop for longer than they wanted to take photos. We passed a couple of distant deer and pronghorn but nothing riveting as yet. We stopped at the info centre who told us where most of the animals hang out and said that the parks famous Begging Burros (a type of donkey) hang out on a certain bend of the road. He also said that they love apples and carrots so feel free to feed them, which we were shocked to hear, and I’d also seen photos in the South Dakota brochure showing people feeding them, so clearly they are regularly fed and different rules apply for them to true wildlife. Craig and I are really against feeding wildlife but the burros seemed to have different rules, a bit like feeding ducks bread or pigeons seeds I guess so we figured we would give them some grub. The burros used to be domesticated animals who were used for trail rides up Harney peak but since that discontinued they were released into the park and these are descendants of them. They’ve probably always been fed by humans, hence them cockily begging as cars drive by. 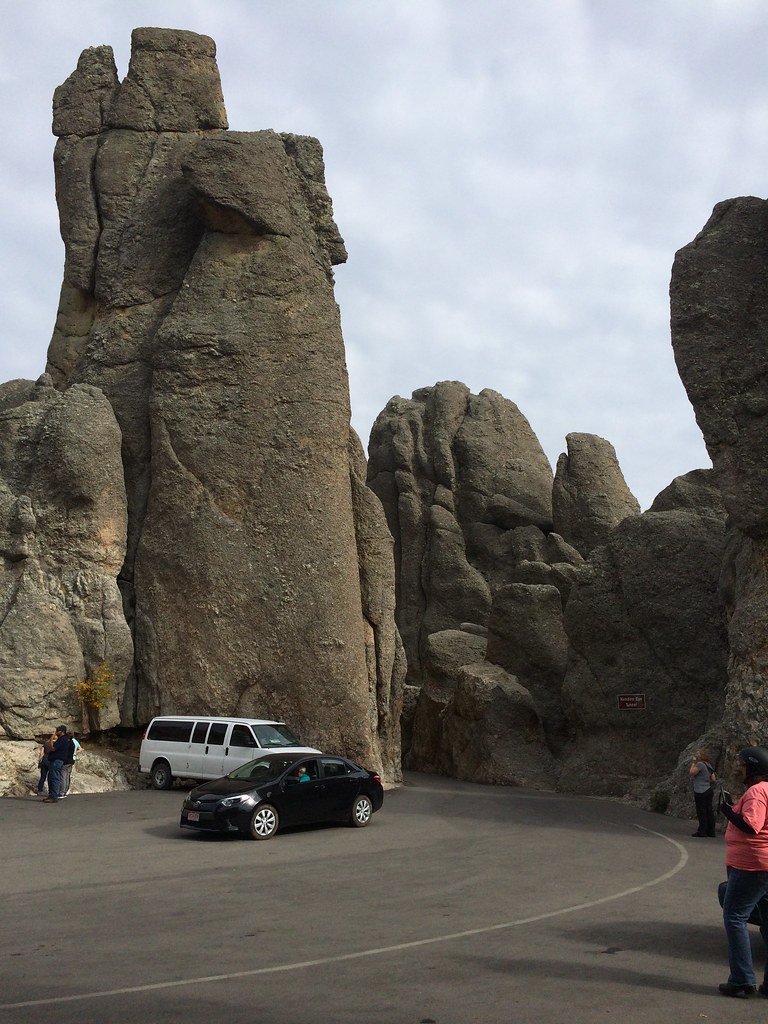 So we pulled up for our afternoon cuppa right where the burros were hanging out. A dozen were relaxing under the shady trees and scratching their bodies on the trunks while 10 or so were walking the road like prostitutes, poking their heads into car windows for business. None of them came close to Daphne and I was disappointed that they were visiting all the cars driving slowly by. So I stuck my hand out the window and one began approaching but soon left when it realised I was empty handed. So I cut some apple up and wearily handed it out and they were loving it. They had me in hysterics as they waited for the next piece and lifted back their lips revealing ghastly teeth. 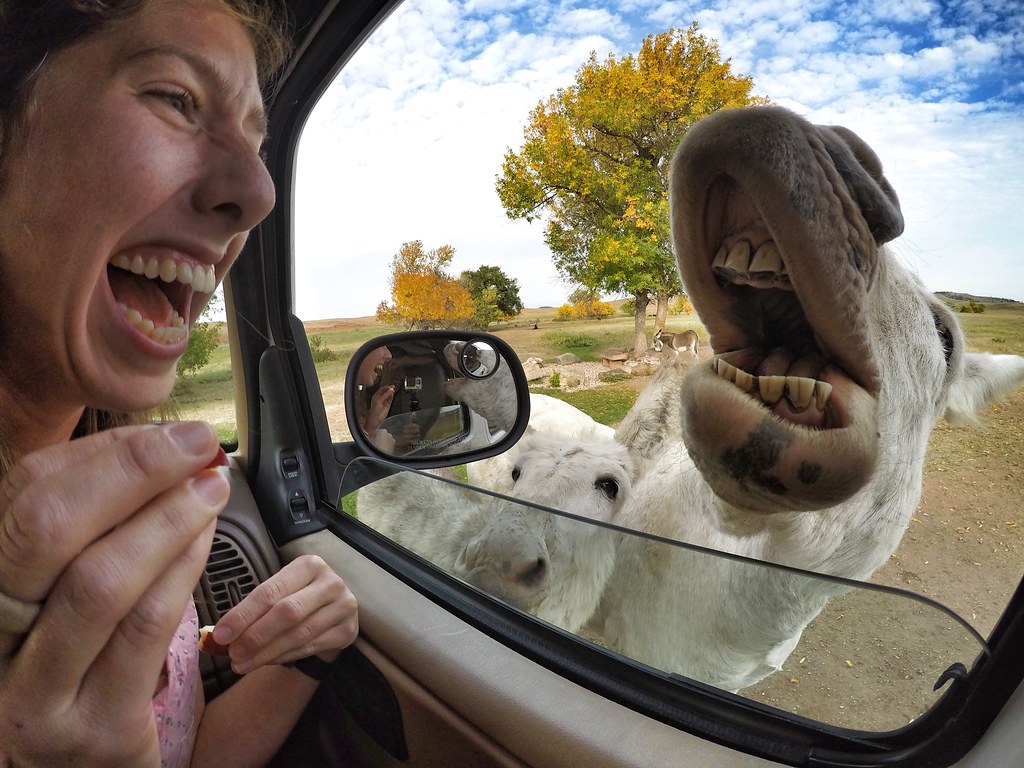 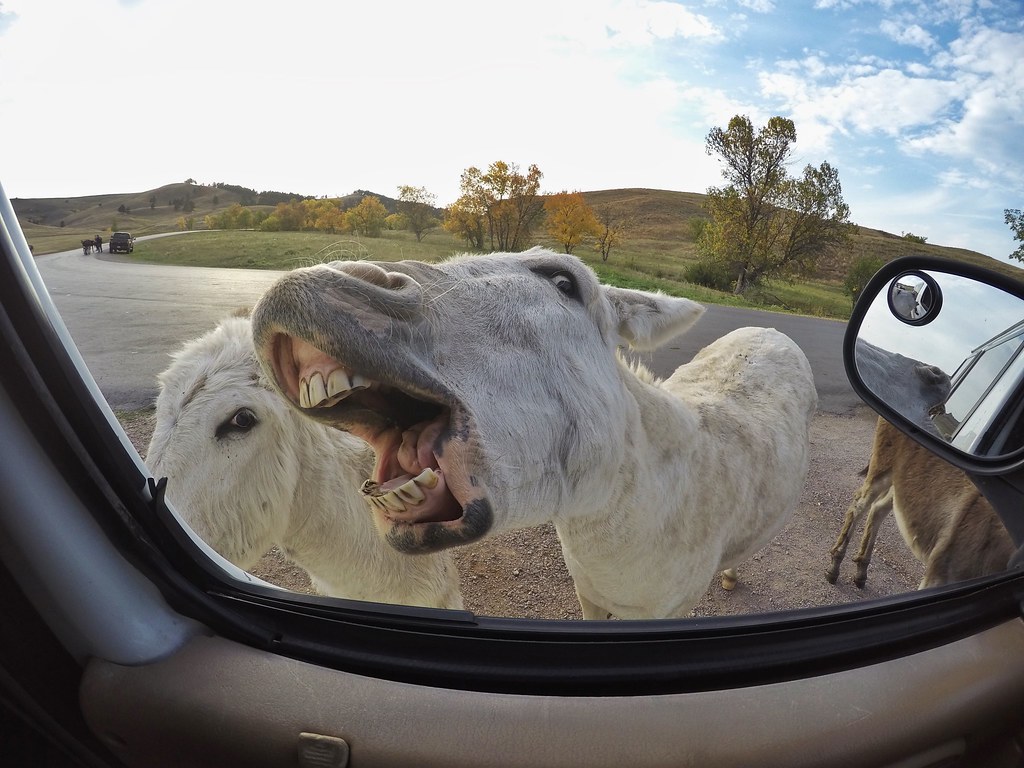 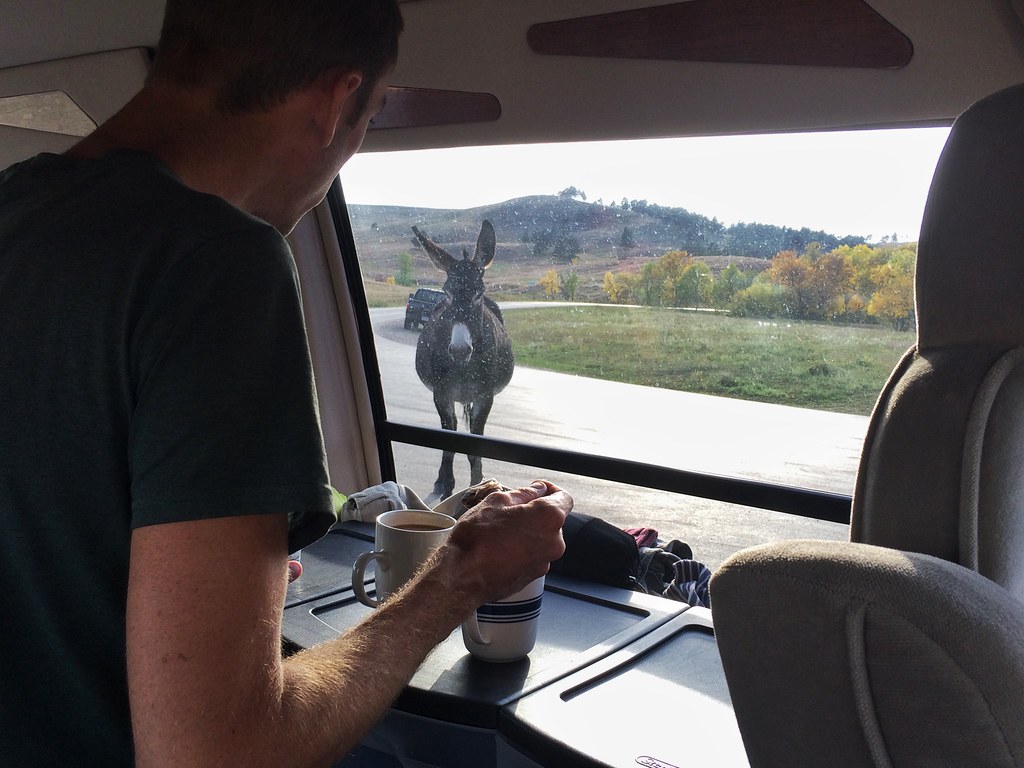 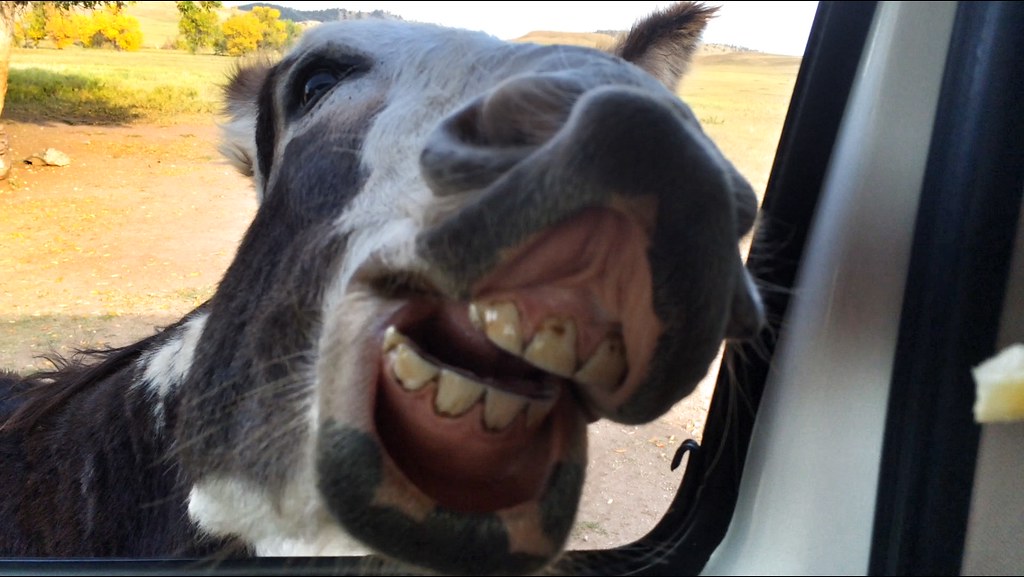 We set off down the road to an area with lots of bison. Next week they’ll be rounding up the herd of over 1000 in the annual round-up to brand new calves. After so many bison in Yellowstone we didn’t spend very long admiring these ones but passed some more deer and pronghorn on the drive out the park and found a nice spot to camp nearby. 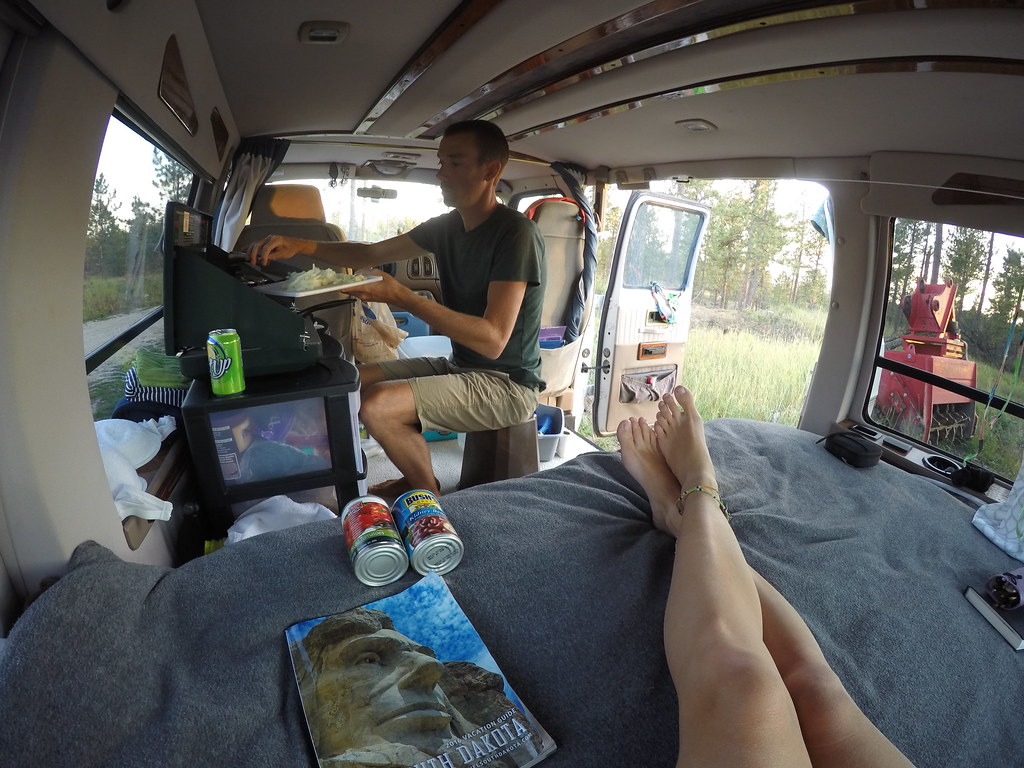