We began our journey through South Dakota exploring the Black Hills region and set off on the Spearfish Canyon Scenic Byway. It was a really awesome drive full of colour and twists and turns. Autumns certainly arrived and the trees were all turning bright yellow and scarlet coloured ivy climbed up the tree trunks. A crystal clear river ran through the canyon and there were tall rock walls around us. 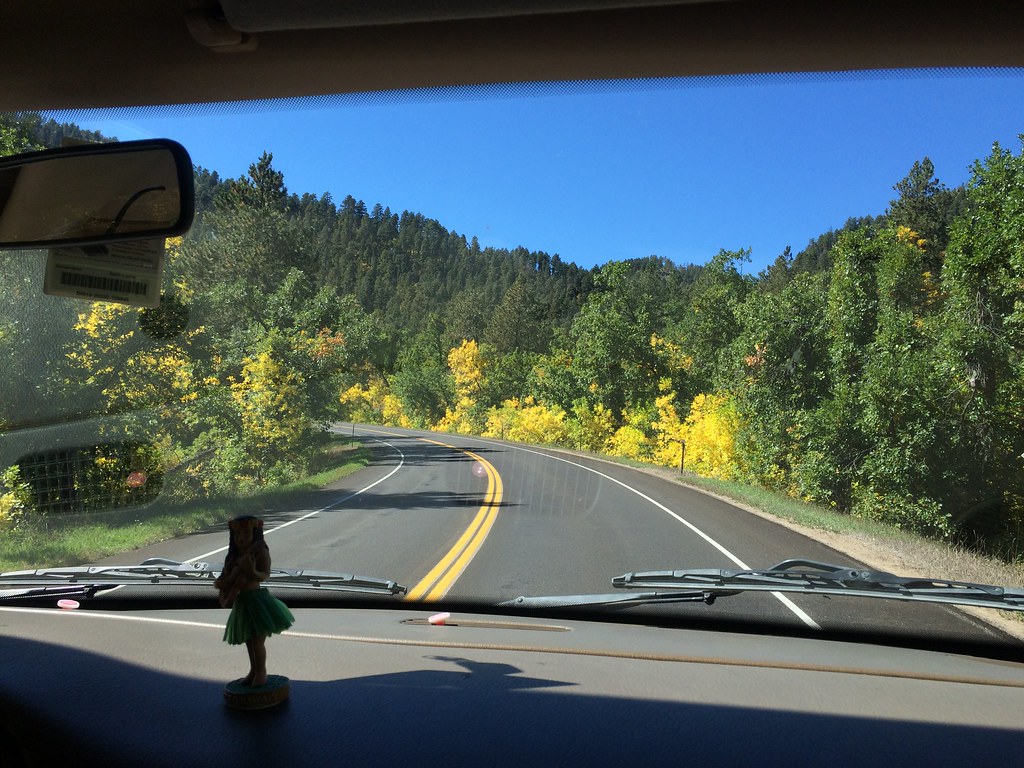 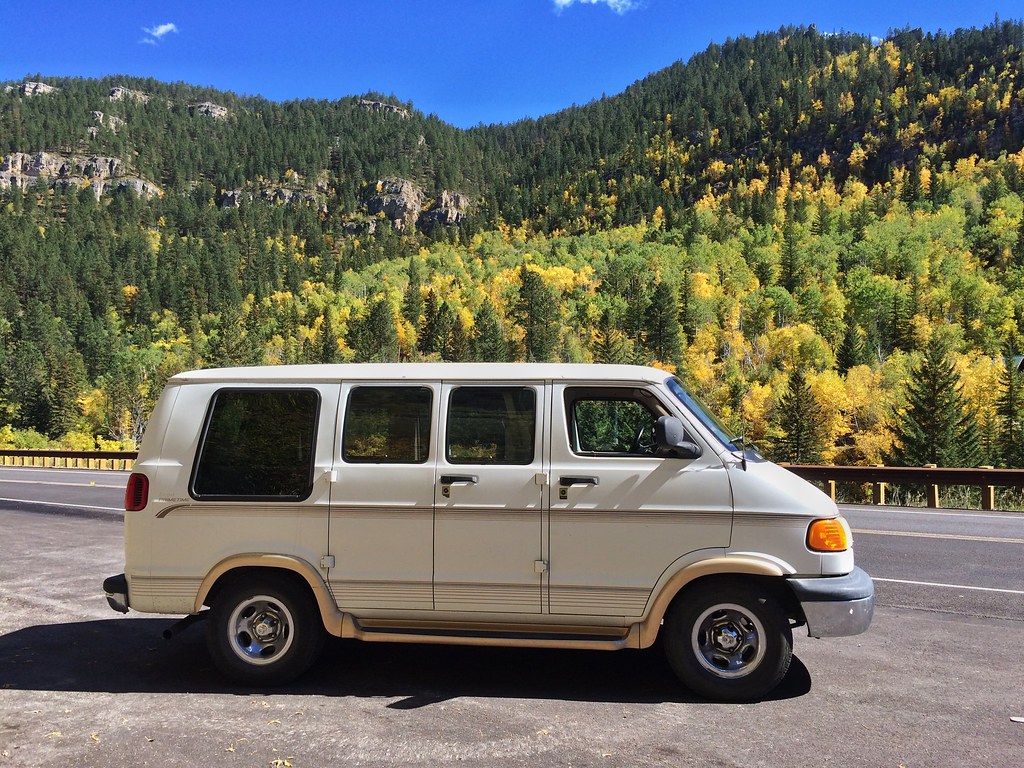 In the afternoon we reached Deadwood, an old wild west town which I was really excited to visit however I was rather pissed off to find our first paid parking lot on our entire roadtrip from Alaska. It’s a tiny town, not a city, I thought it was outrageous. You may laugh that it was only $3.50 but it was the principle. Luckily we found a free parking area at the bottom end of town. I was expecting a wooden wild west town with flat fronted buildings but instead it was tall brick buildings and not as aesthetically pleasing as i’d hoped. We wandered along the street and popped into a few shops. It was a bizarre place that kept with the old theme of gambling which the town was known for in its heyday. Therefore almost every shop was 3 in 1 and housed a souvenir shop, gaming room and bar. It was a beautiful warm day and people were sat inside just poking money into slot machines. We went into Saloon no.10 which was the famous site where Wild Bill was shot. Twenty minutes was long enough for us and we headed south. 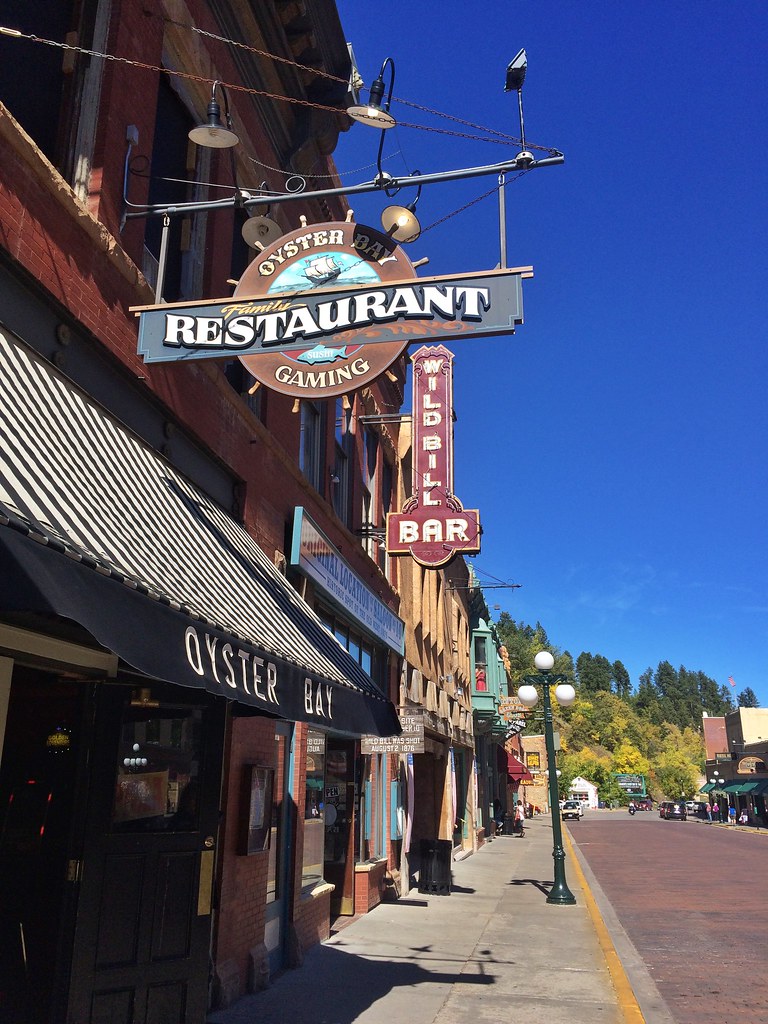 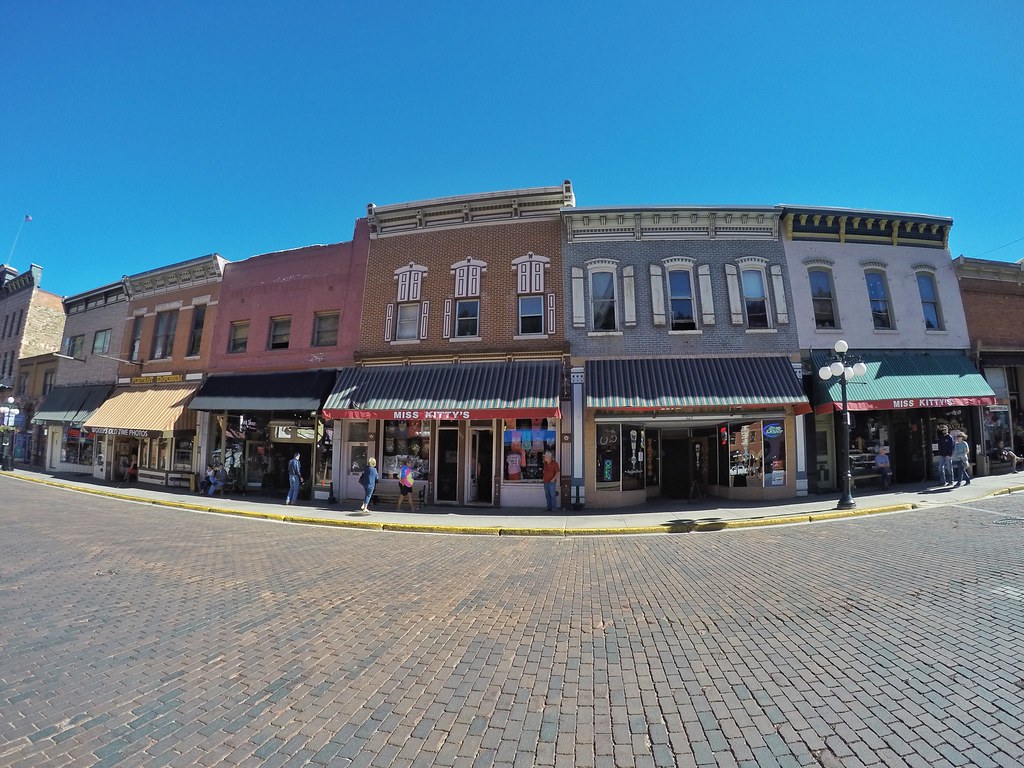 The next day we headed to Mount Rushmore, a major bucket list visit for us. We stopped at a beautiful lake with crystal clear water, lots of bays and rocky islands and no one else in sight. Back on the road we were whooping at our first Rushmore views. A steep section of road led around a bend revealing the four presidents carved into a rocky mountain of the Black Hills. The carvings are protected as a National Memorial, this one was actually free to visit which didn’t matter either way as we have a national park pass but we were shocked to find that there was a concession parking charge of $11! Once again it’s the first national park we’ve come to with paid parking. On the plus side they kindly gave us an ‘annual pass’ for parking at Mount Rushmore, which is great as I’d imagine most visitors like to come back multiple times in one year(?!) Bad news was the annual pass only accounted for 2016 and ran out in December. Anyway, rant over. 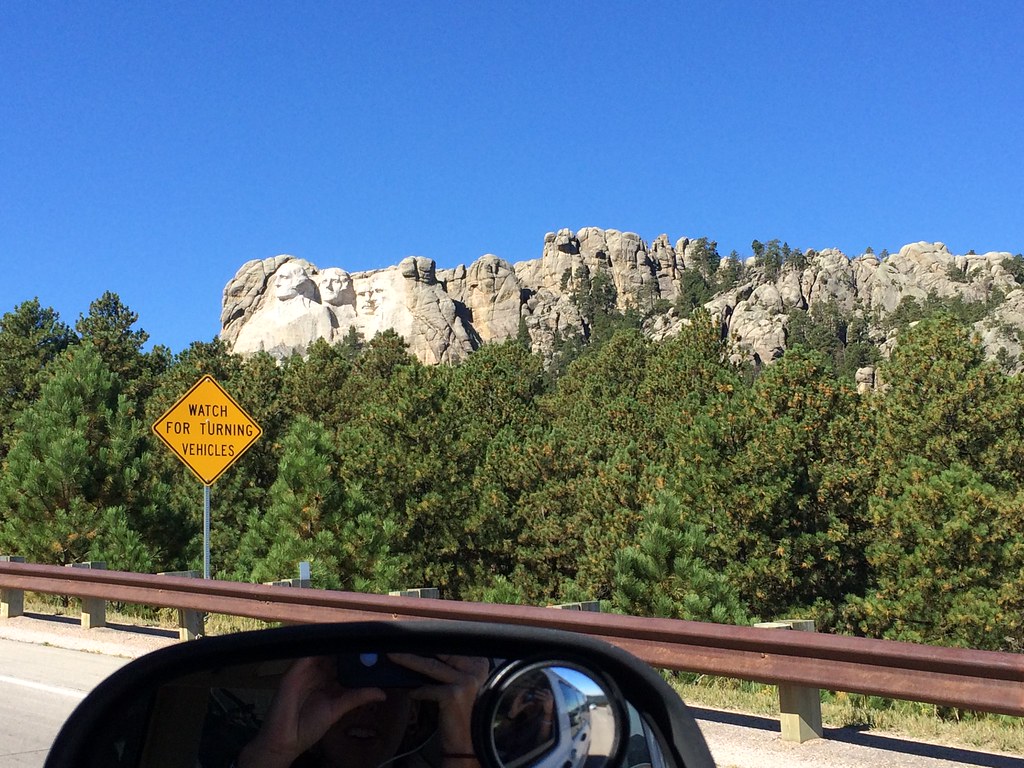 It was a really popular attraction, and rightly so, it’s an iconic image of America. We followed the crowds of people through a passage lined with the flags of each American state swaying proudly in the wind and framing the impressive carving. The path led to the grand view which was a perfect vantage point to admire the faces. 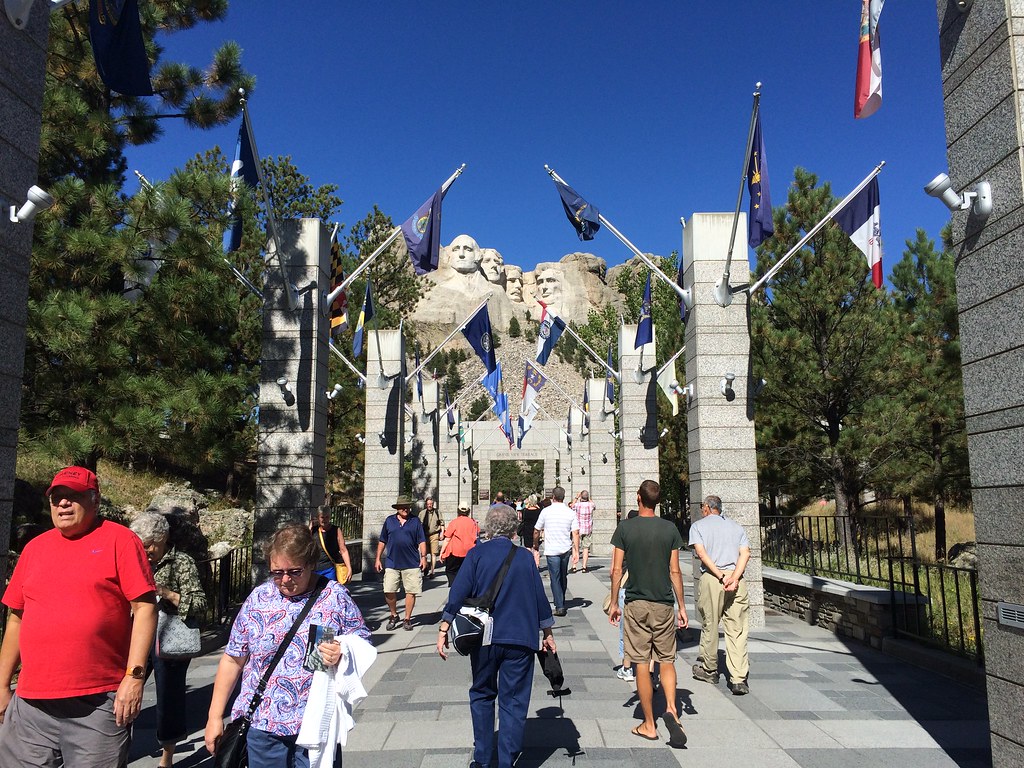 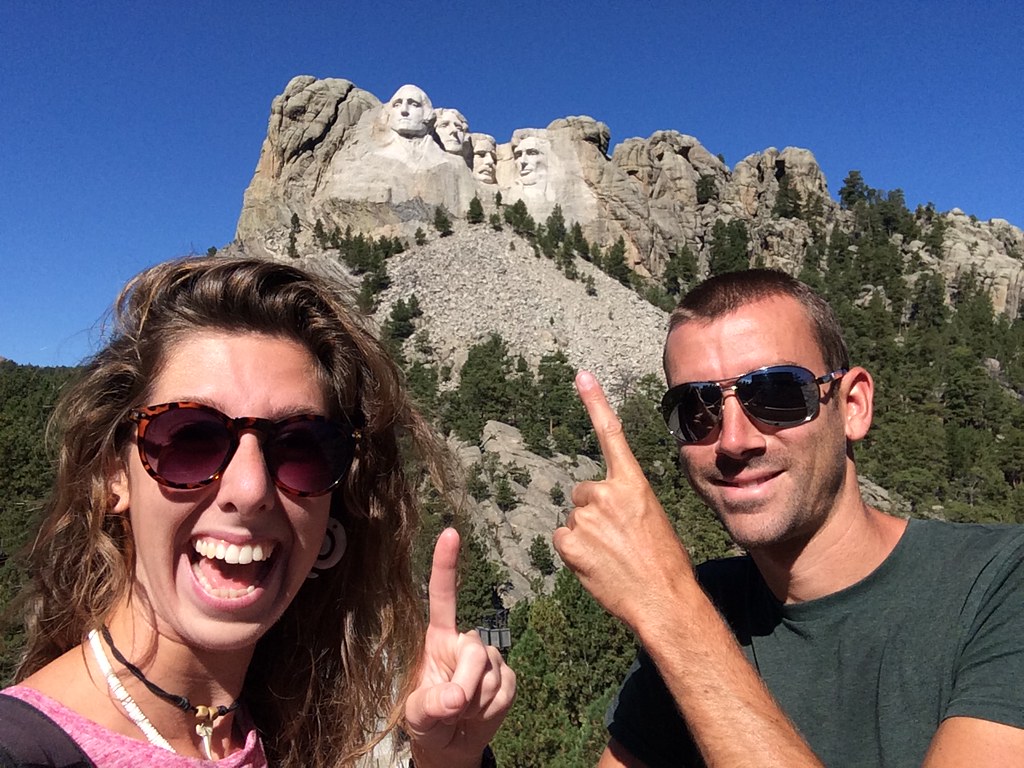 The carved faces from left to right were George Washington (Americas first president), Thomas Jefferson, Theodore Roosevelt and Abraham Lincoln. Four people who shaped America and made it what it is today. It was hard to appreciate the size of the carvings which were about 60ft tall, that’s as high as a six story building and with eyes 11ft wide! 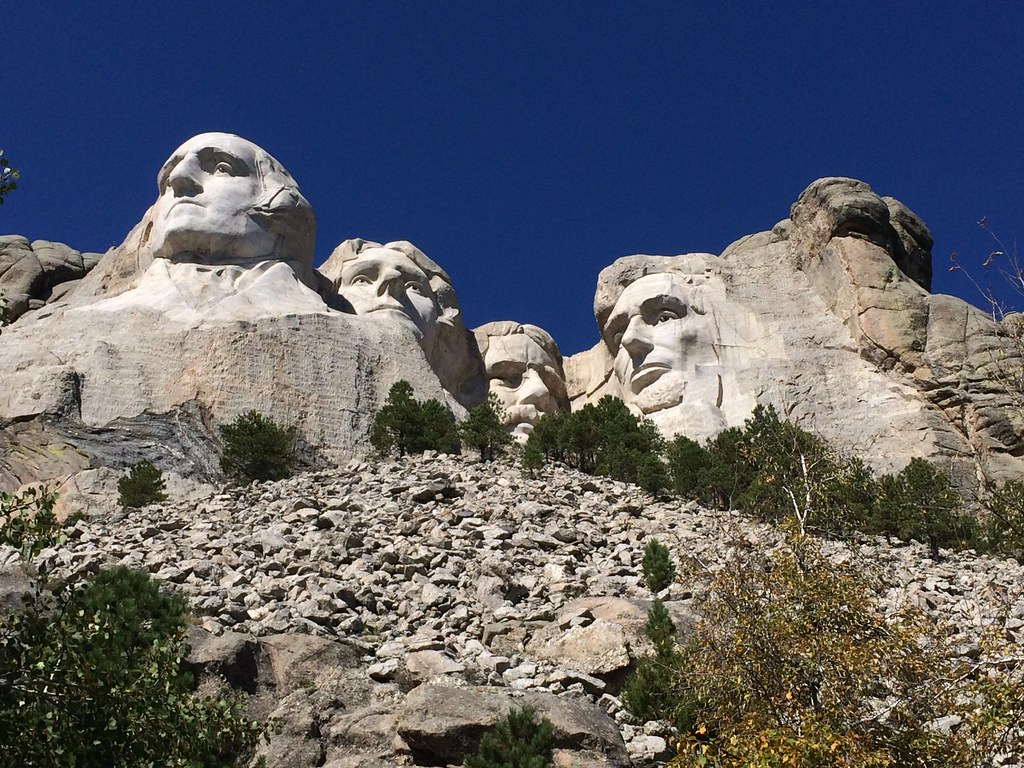 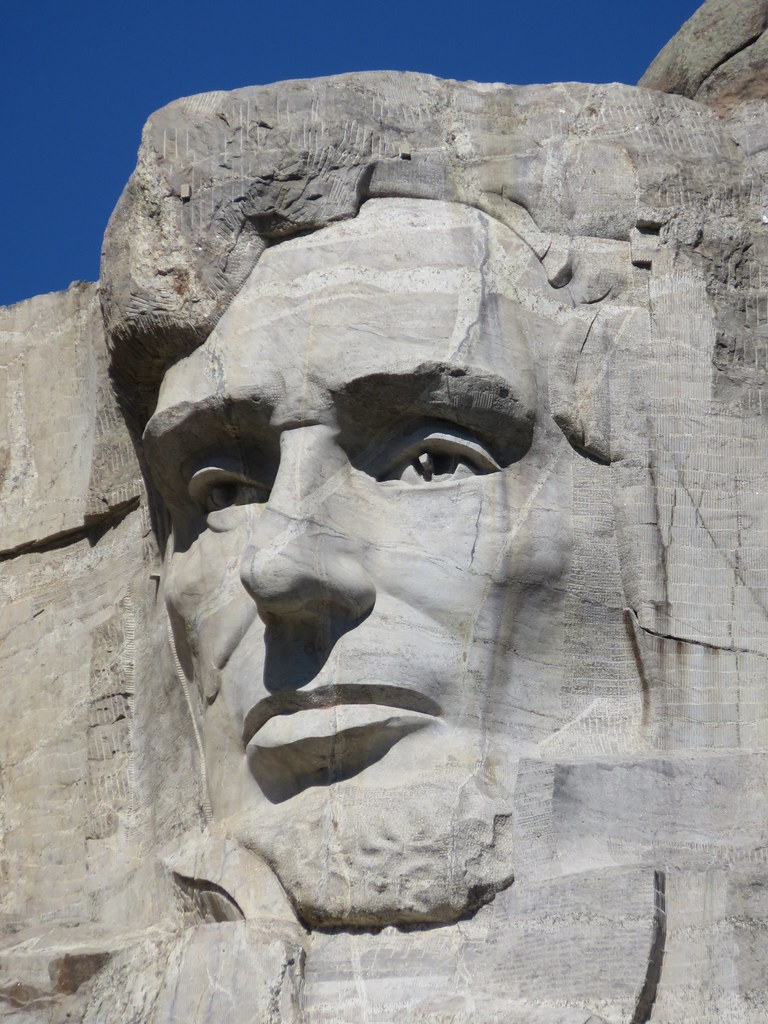 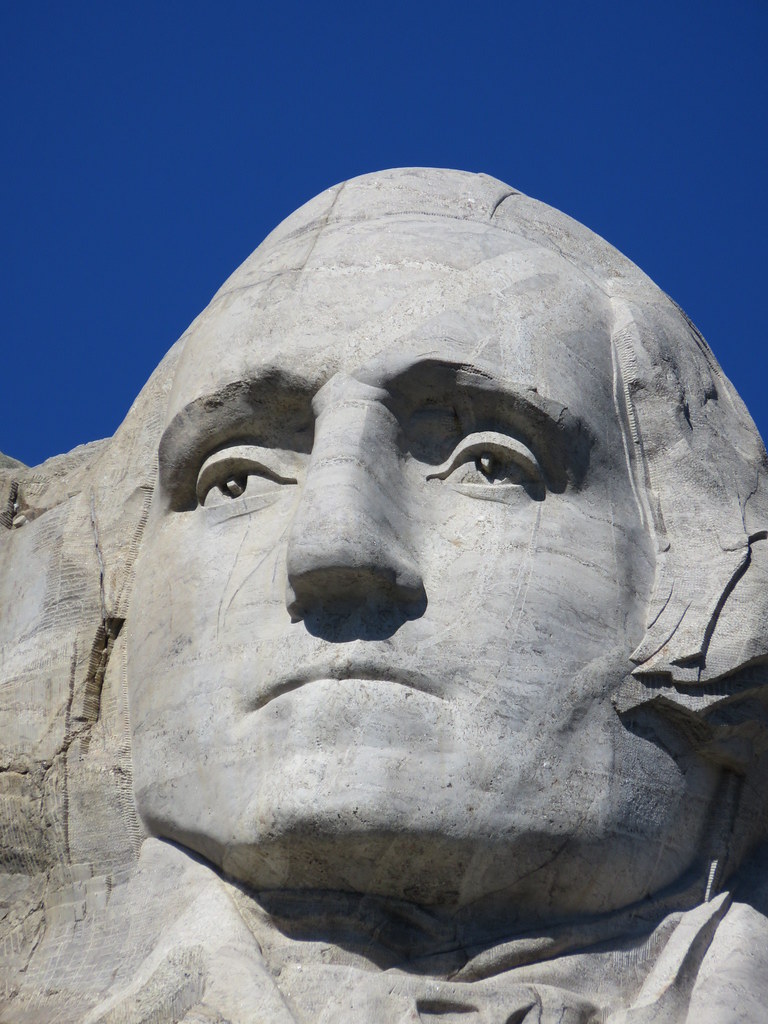 We did the Presidential Trail which led under the carvings so we could look up their nostrils! A little information plaque said a bit about each president. We were surprised to see a couple of them had no formal education. I also found Jeffersons plaque interesting, it listed his children, Martha lived for 64 years but the others sadly didn’t have the same luck. Jane lived for 1 year, there was an infant son with no age so I guess he didn’t make it past birth, Mary 26, Lucy 1 and another Lucy lived to the age of 2. Obviously this was a very long time ago so medical and medicines would be limited but it seemed odd that they all lived such short lives.

The sculpture studio was really interesting as it showed the final prototype that the carver, Gutzon Borglum created. For every inch of the sculpture they converted it to a foot for the mountain carving and on the original was the torsos of the presidents however a variation in rock meant they weren’t able to carve those parts. Luckily the rock didn’t change half-way through one of the presidents faces!

Another thing I found fascinating was that 90% of the sculpture was done with dynamite. They became so skilled at it that they could dynamite within a few inches of the final masterpiece. They’d then drill lots of holes a couple inches apart, this was called honeycombing, and then they’d blast it all smooth with an air compressed tool. The final touches were done by men sitting on suspended swing style chairs hanging above the abyss. Borglum made silicone prototypes of each individual face too which were taken up the mountain. A metal pole was then connected to the prototype with a string hanging down which was used to measure the 3D sizes. Those measurements were then converted to the final piece and the same metal pole and string device was attached atop the mountain to ensure the measurements were correct on the carving. The whole project took 14 years, 6 of which were carving. Workers were paid from 50 cents an hour for labourers and truck drivers up to $1.50 for carvers. The eyes on the carvings had been done very cleverly, almost cave like so they appear black but with a single piece of rock remaining so it looks like the shine of an eye to make them seem human-like. 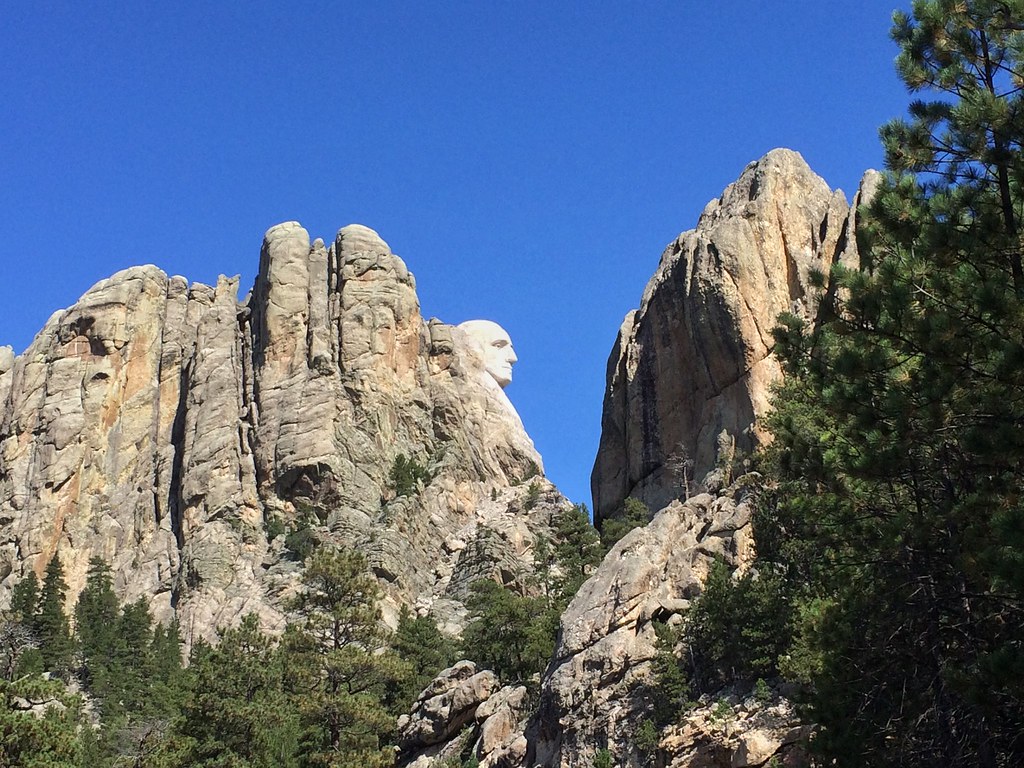 We visited the museum too which had a video showing he progress of the carving and how the local residents were very against the idea saying “the Black Hills are perfect as they are, what could possibly be greater than gods creation?” They soon changed their tune when they saw how wonderful the carvings were. The museum also had a pretend dynamite detonator where you could select a part of the mountain to detonate, push down, and watch the actual video of that section blowing up. It was quite amusing watching a couple of old ladies giggling as they repeatedly detonated the mountain and got such joy from it.

I think the most amazing part about Rushmore is how just one mistake would of ruined the entire thing. One dynamite too many and it would look like Washington had had a chunk bitten off his cheek. I didn’t expect to find the memorial so impressive and we were lucky to have perfect blue skies. As we left the carpark we went past a profile view of George Washington where his face sort of appeared out the edge of the mountain and we waved goodbye to them.