The Natives believe that the Devils Tower was formed when two local boys were being hunted by a giant bear who’s claws were as long as teepee poles. They prayed to their creator for help and this huge rock rose beneath them. The bear tried to reach them from every angle scratching the sides. An eagle came to save the boys and the bear ended up leaving, defeated, and resting at Bears Butte in South Dakota. 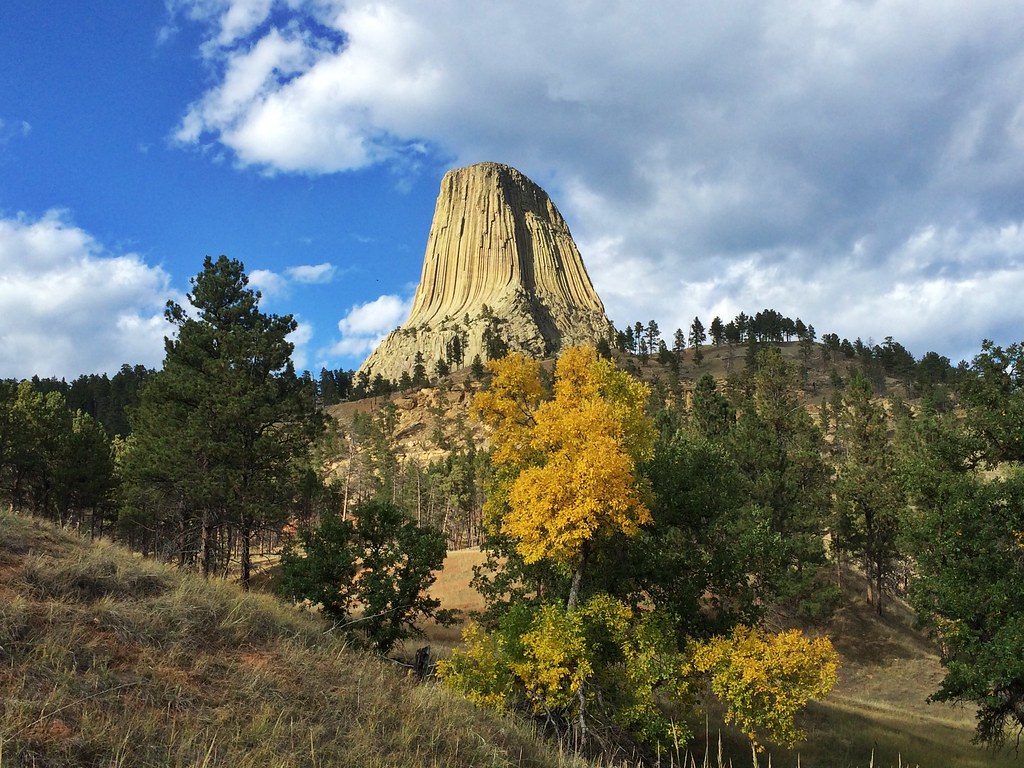 I liked the native story as it seemed like the only possible reason for such a bizarre rock formation to arise out of such flat land. The rock was covered in vertical lines and eagles swooped around the peak. Scientists have a few theory’s but from what I read it all seemed like guess work as appose to a finalised answer. They think magma spewed up and cooled in that manner. Not such a cool story. A road led right up to the tower passing Prairie Dog Town on the way. It was a field covered in holes, mounds and fluffy little animals sort of like wild Guinea Pigs. They’re funny animals that we’ve never seen before. They are very socialable, hence them living together in ‘towns’. Their burrows and tunnels go 3-10ft down and another 10-15ft horizontally. They are the prey for animals like eagles and coyotes and their tunnels provide homes for other animals like snakes and spiders, so their an important part of the ecosystem round here. 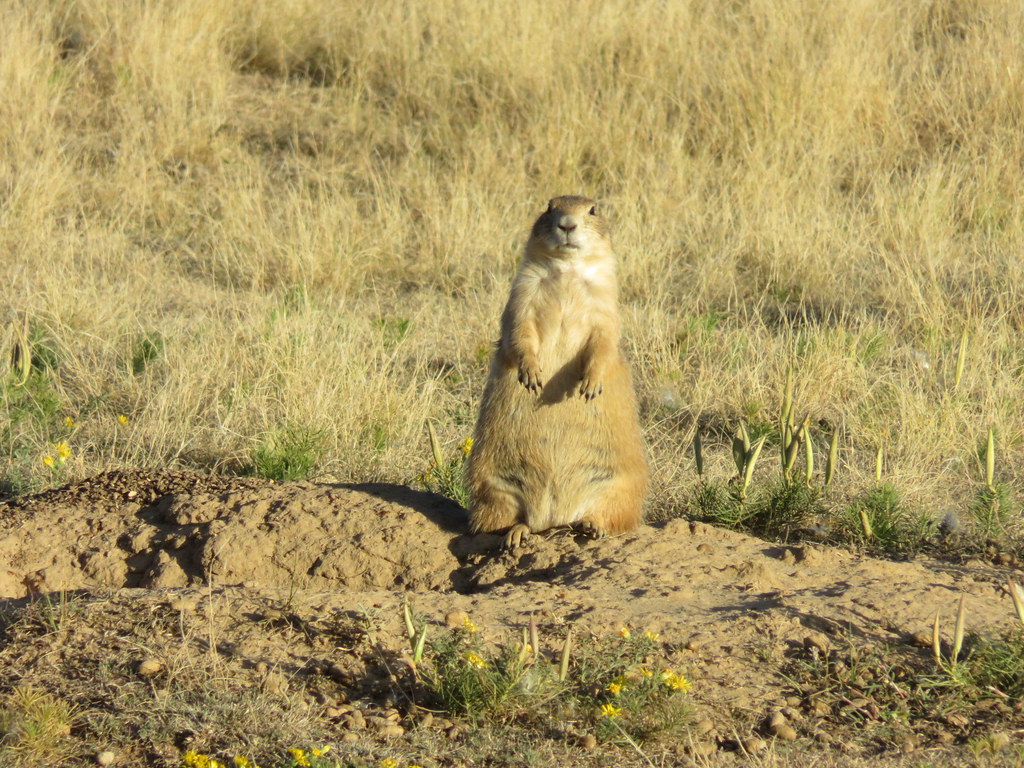 We reached the tower and took a stroll to its base. Looking through binoculars we could see a couple of specs half way up the tower which turned out to be two climbers. It’s an extremely popular climbing destination with over 200 routes leading to the top. I think I read the youngest climber up was a 6 year old and the oldest 80! Wowee! There’s no devices on the tower like metal holes to put your rope through but it’s one of the best places to use all the other climbing equipment. I wouldn’t know what the heck their called but devices you’d put in the crack of a rock and you expand it so it jams in place. 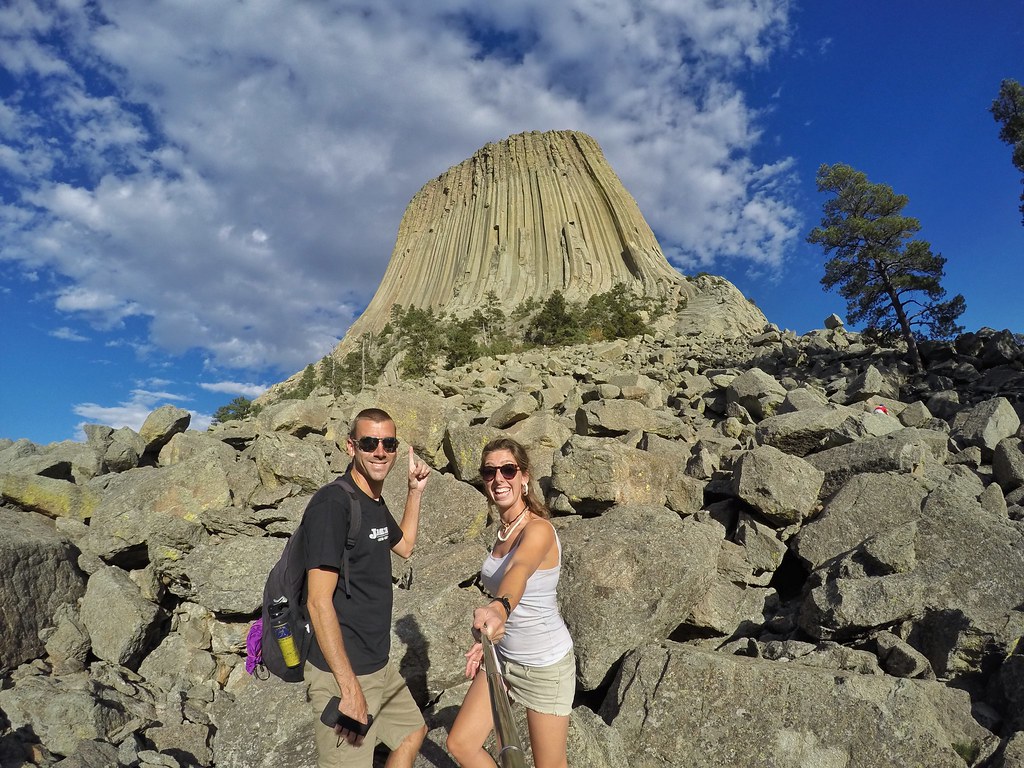 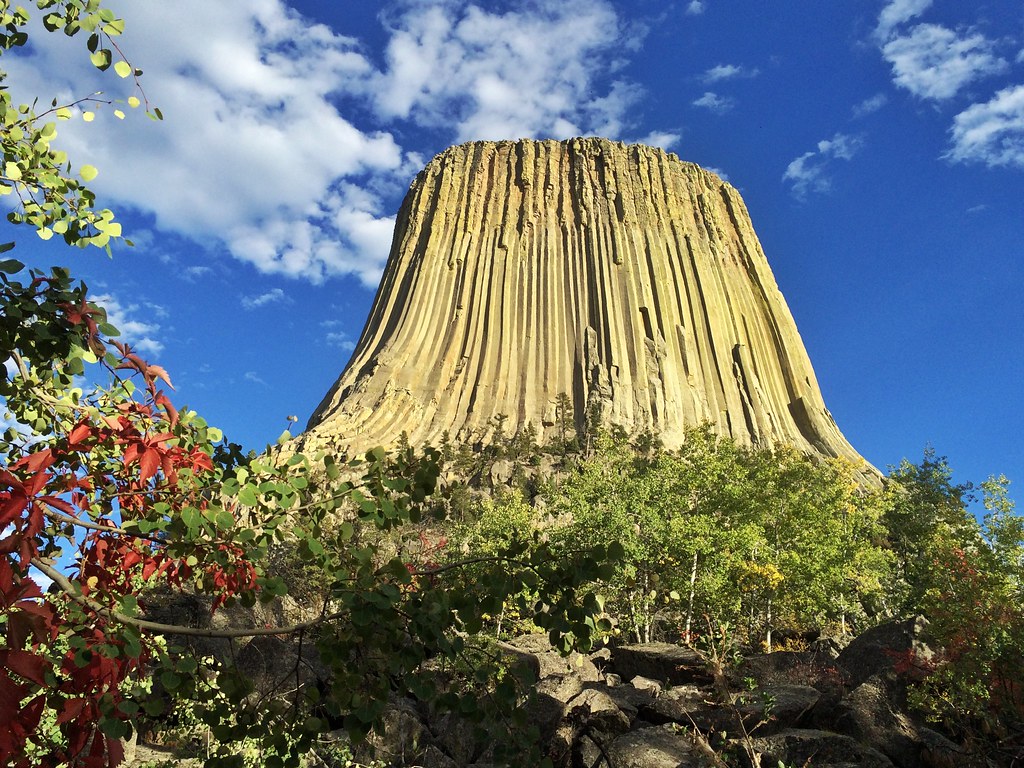 The next morning we went back to the tower to see another side of it lit up by the sun. It was quite amazing how it changed shape depending on what angle we looked at it. We did a walk to see the vibrant red rock walls around the river which was contrasted with the bright blue skies and green grass dotted with mule deer. 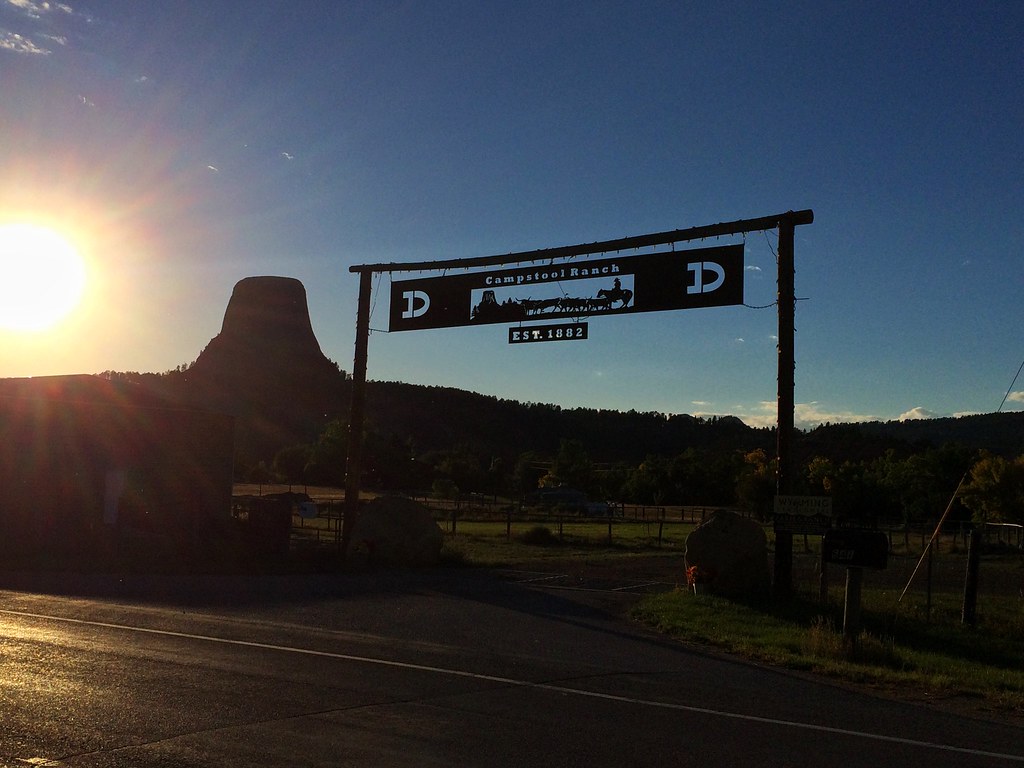 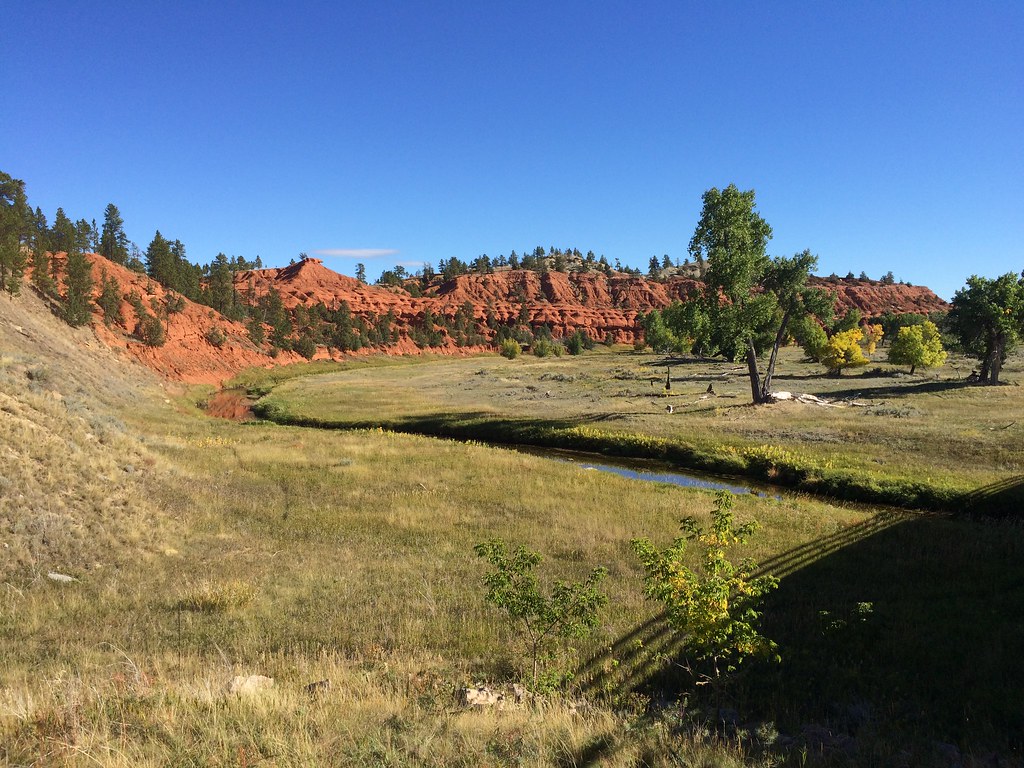 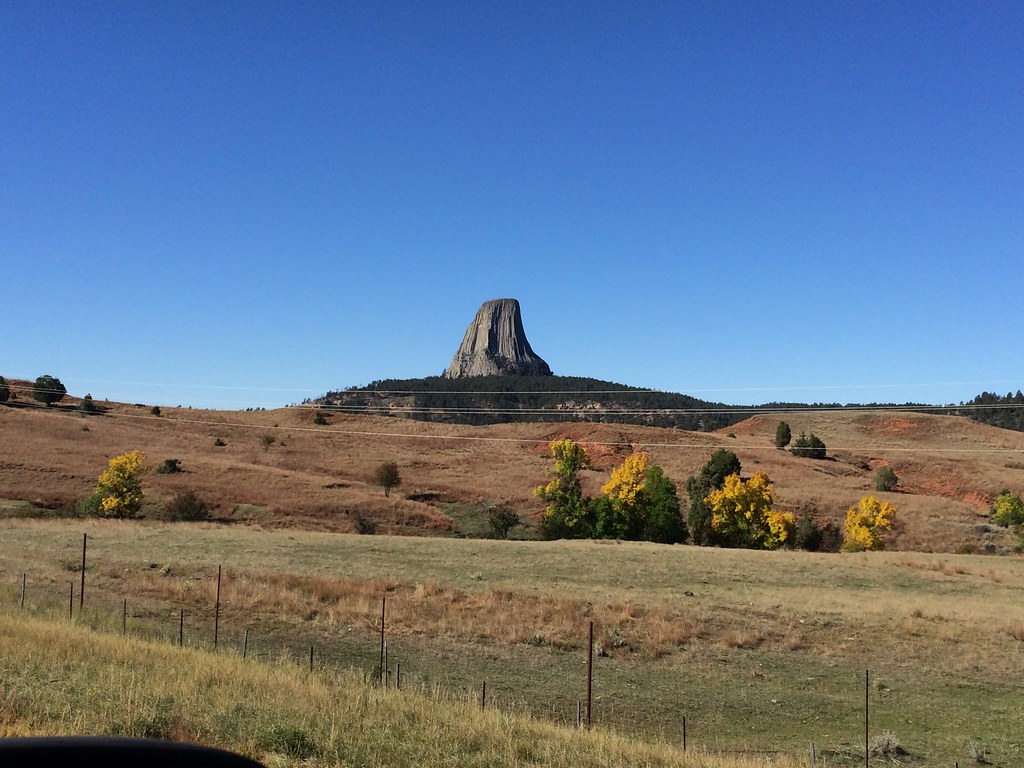 We then headed on a lonely road east to the border with South Dakota, passing the tiny village of Aladdin on the way. It’s population was only 15 and it even had a community hall!! The village general store has been around for 150 years old and it certainly showed it on the inside with crumbling walls, creaking floor boards and peeling wall paper. It was full of random antiques, taxidermy, souvenir t-shirts and even a bar the size of a walk-in-closet. 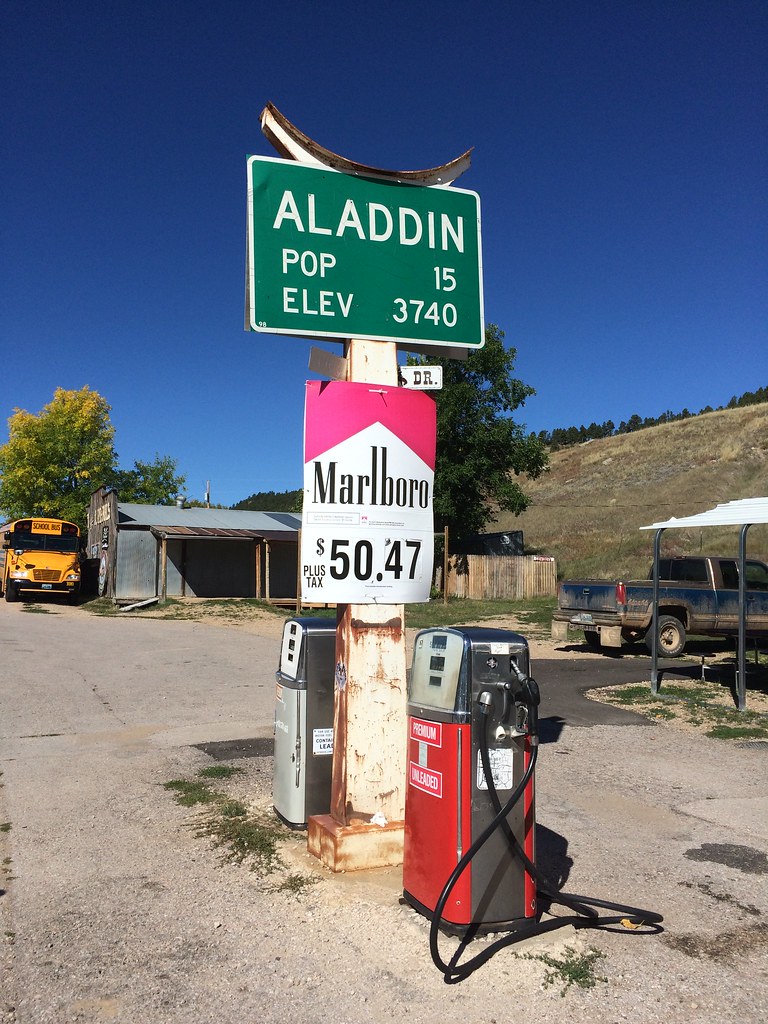 Shortly after we crossed the border and left wonderful Wyoming which has showed us some of the most jaw dropping views of our trip.