As soon as we left Yellowstone we figured that would be it for Grizzly encounters for the rest of our trip, which was a sad thought. However, as we searched for a place to camp we were greeted with a sign that got us extremely excited: ‘GRIZZLY BEAR AREA, specials rules apply, camp only in developed campgrounds’. It was a good and bad sign; we were like kids at Christmas at the thought of seeing more bears but where would we camp for free? We figured that the sign was focused on tenters as our map showed nearby campgrounds only allowing hard-sided campers and no tents so we stayed in lay-by nearby and dreamt of bears.

The next day we woke super early and began a snail-paced drive. The road suddenly had a huge red rock wall to one side and the river to the right where another ochre coloured wall arose. We were heading right through a beautiful canyon which we hadn’t expected to see. Out of nowhere a tiny black bear snuck under the guard rail and crossed the road in front of us. We stopped and looked for mama bear as she hadn’t crossed and was nowhere to be seen. The little bear wandered up into a valley between the canyon walls picking food here and there. It was probably a two year old and had recently been left by its mum. Imagine the shock it’s going to have this winter when it has to build its first ever den and mamas only taught her once before! Little bear came back to the road and made a sprint at the perfect time when no other cars were around. She ran right through the canyon and then darted up at the first exit point so we left her be and continued on our wildlife drive. 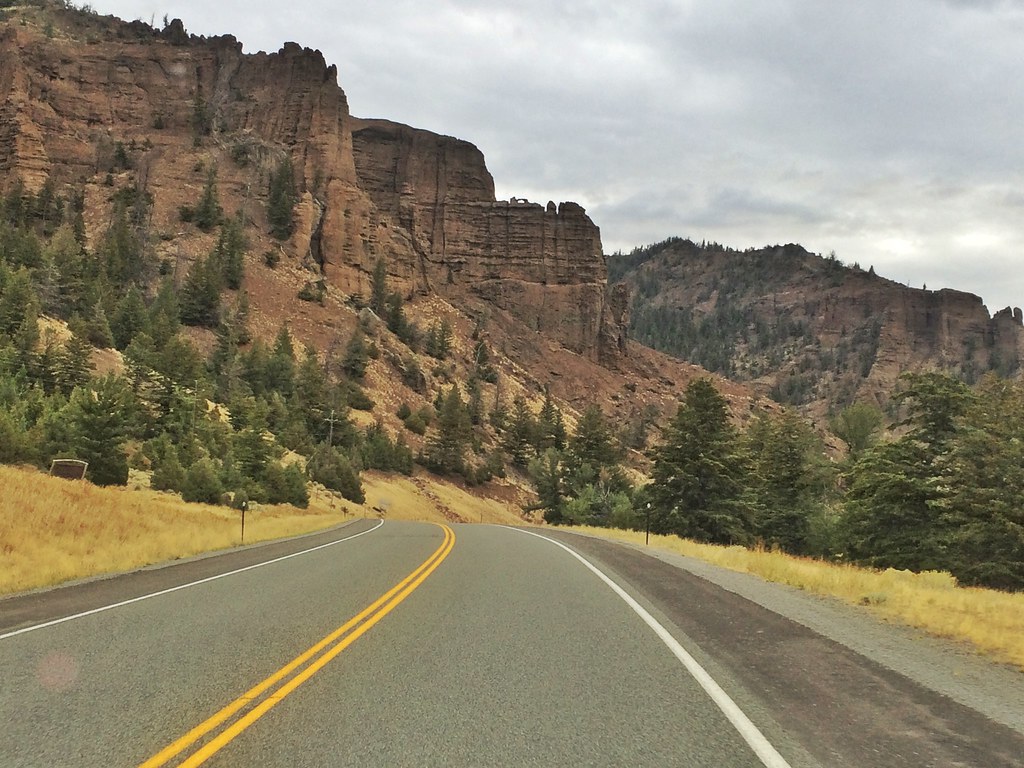 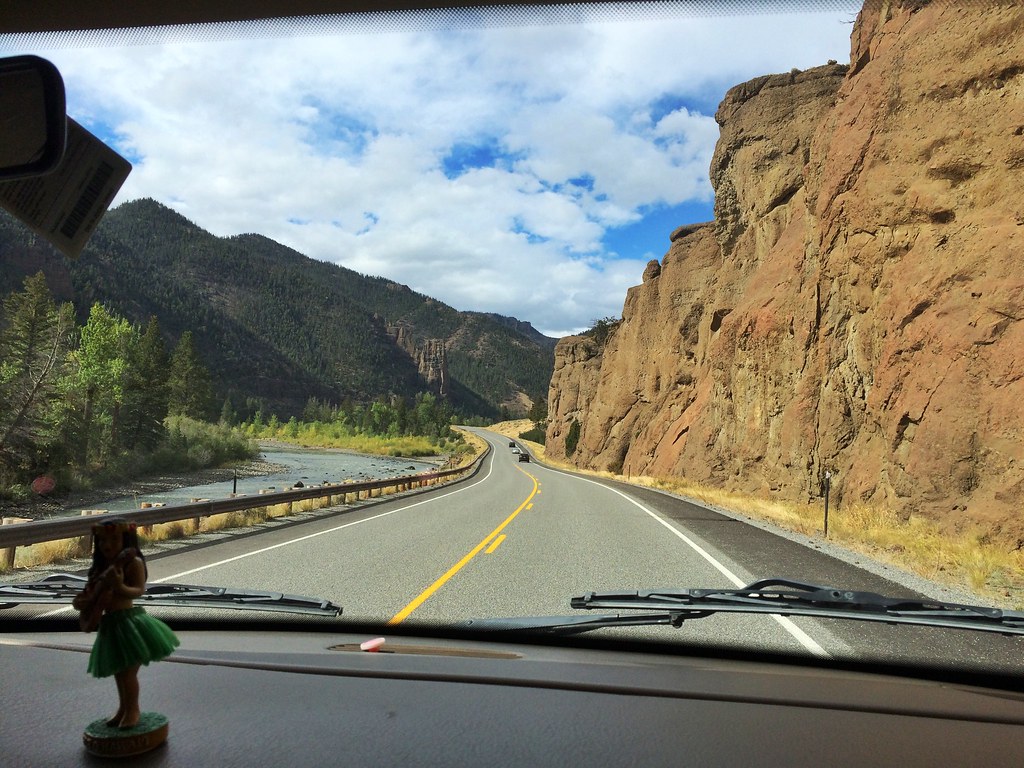 Because the road went through a canyon it was an easy route for bears to take. And evidently the road was scattered with berry riddled bear scat, just in a few miles we saw over 8 scats! We continued driving very slowly until we saw a few cars pulled up and we sped up to see what everyone was looking at. It was a grizzly bear up in the hill eating a carcass. We set up our table inside the campervan and balanced our camera atop it so we could have it zoomed in and watching the bear like a live documentary. The bear was tearing at pieces of stringy meat and an occasional leg bone, probably from a deer. Lots more cars pulled up on their way into Yellowstone. We were busy watching the bear wander slightly away from the carcass when lots of shouting came from our left. We looked around and some men were shouting up the hill towards the bear “Get outta there you fucking idiot! She’ll get you in a second!!” Then we looked to the right and a 10 year old boy had walked up the hill towards the bear!! Bloody hell! He walked back to his irresponsible parents with his tail between his legs. The grizzly tore off some more scraps of meat and then started to walk up the hill until she was out of sight and the parked cars all zipped off towards Yellowstone. 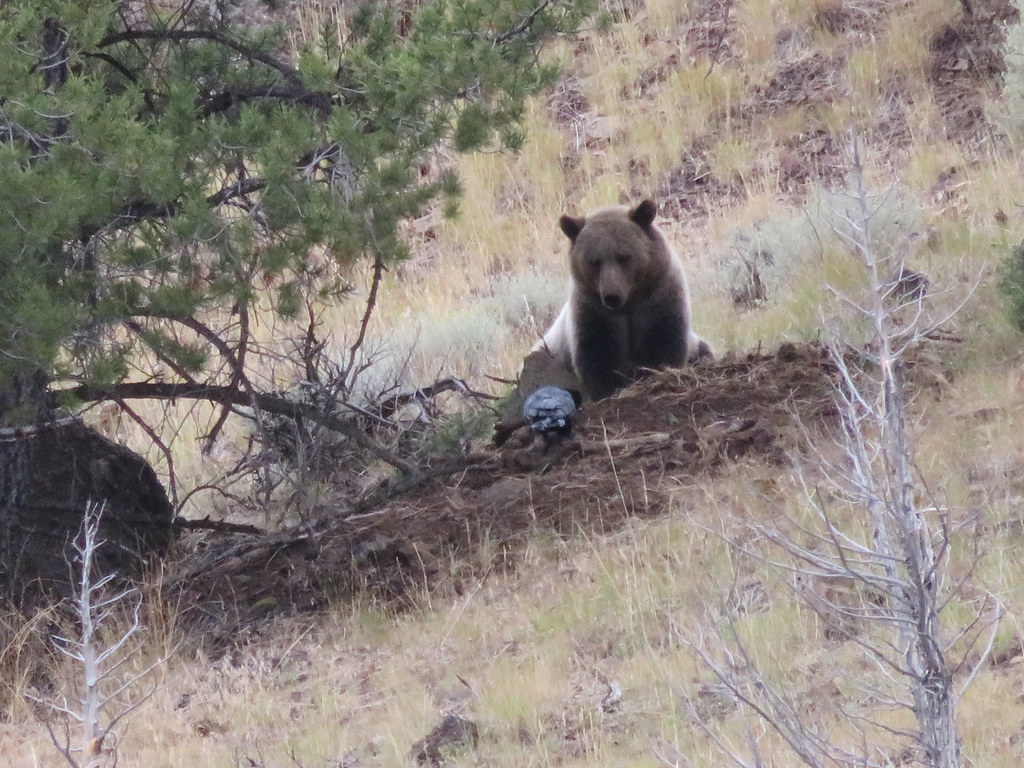 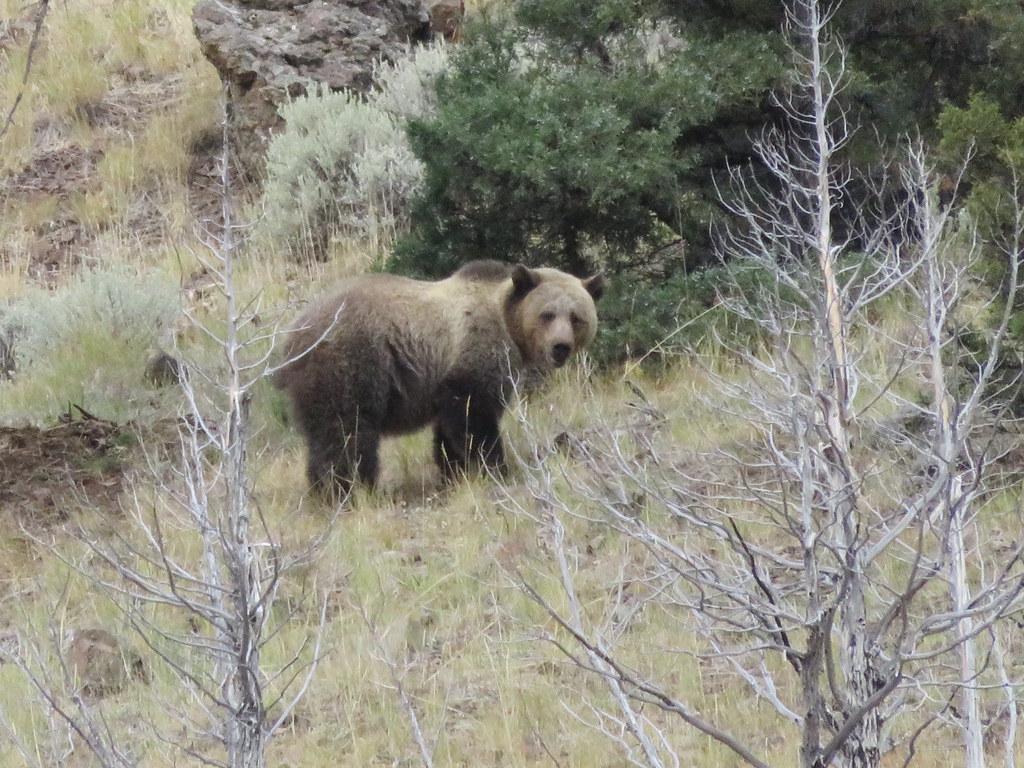 We continued down the fabulous canyon and the sun came out turning the walls a bright terracotta colour. The sheer walls were similar but on a smaller scale to Zion National Park in Utah and there were crumbled peaks which reminded us of monument valley in Arizona. We spent the whole day driving up and down the road, stopping to eat and wildlife watch. 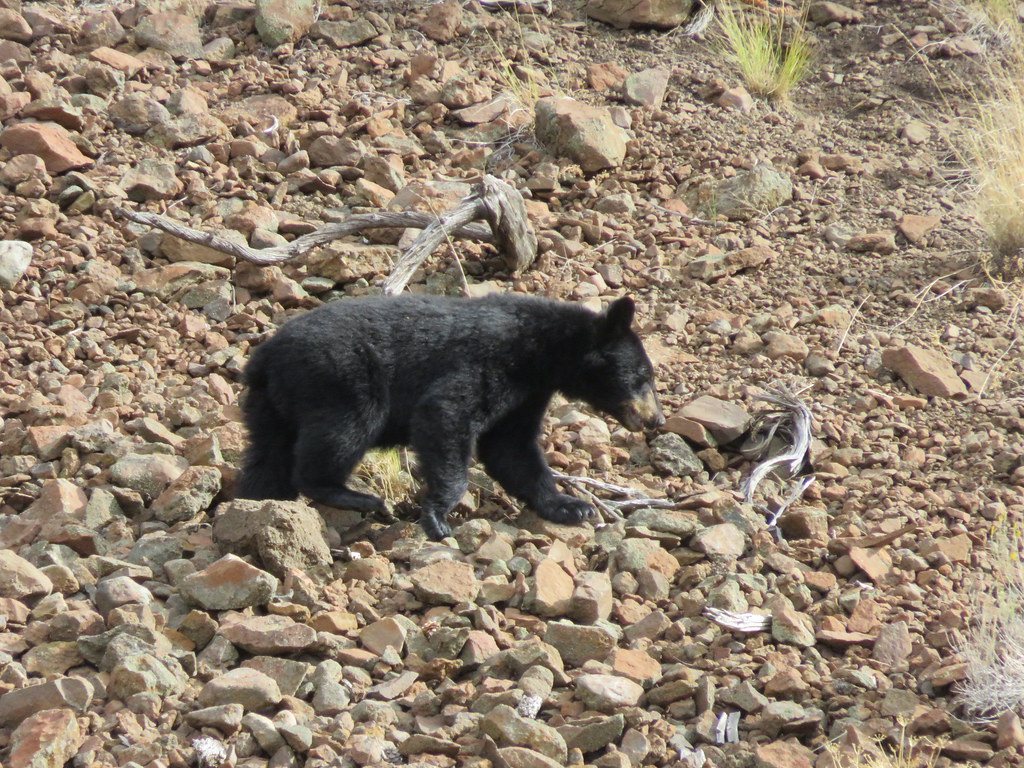 After dinner a man on his own pulled up in an RV beside ours right when Craig had gone to the toilet. He opened his window to talk to me so I reluctantly did the same nervous what he wanted. All he said was “You wanna see a bear?”. I must have an aura about me and I replied “YES!”. He told me there was a grizzly 2 miles up the road so when Craig got back we drove off and found ourselves right where we’d witnessed the black bear earlier, and where we’d spent the afternoon sipping tea. There were lots of cars pulled up along the road all on their way east after exiting Yellowstone. We were the only car driving west and there was almost no one parked on our side so we pulled up and looked where people were aiming their cameras. We started looking way up on the canyon but couldn’t see the bear and then Craig spotted it. It was only a few meters away from us in the middle of a group of berry bushes. Occasionally her head would poke out the bushes but other than that it was hard to get a good look. So we put all our eggs in one basket and reversed back, if she came round the back of the bushes we’d have a great view. Thankfully she must’ve heard our plan and began wandering around the back side and eating berries in the open. She melted our hearts as she sat down like a big fluffy teddy bear and nibbled berries while seated. She moved around the front side of the bushes and had a look around before continuing her feast and heading up a bushy section between the canyon walls. 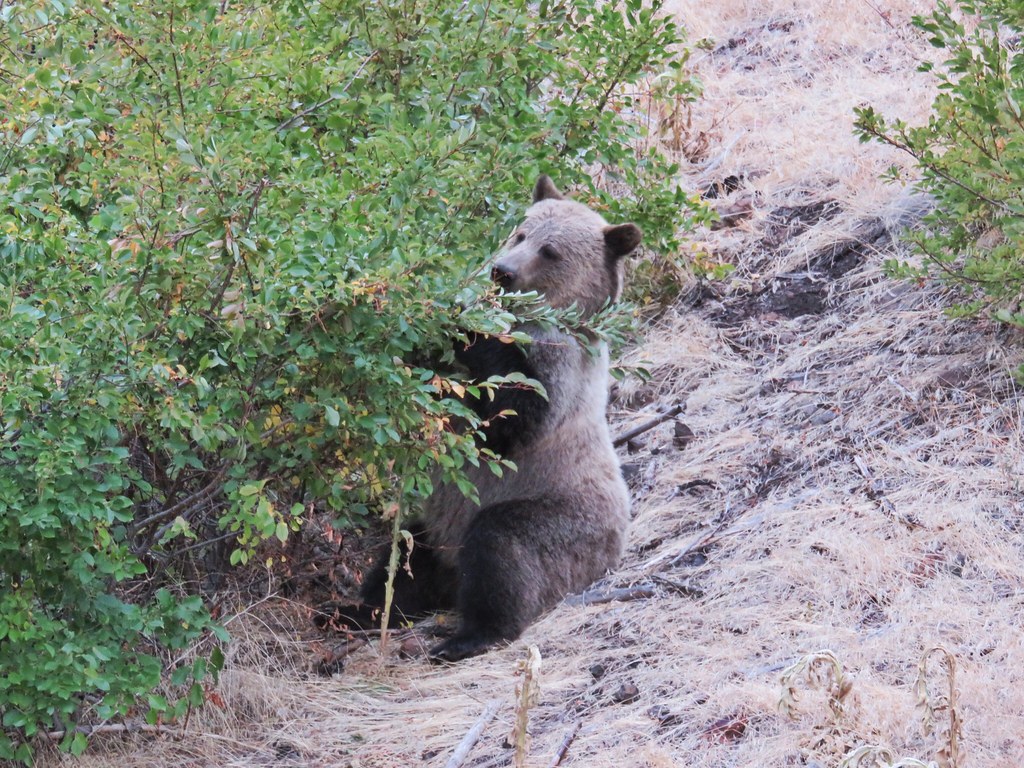 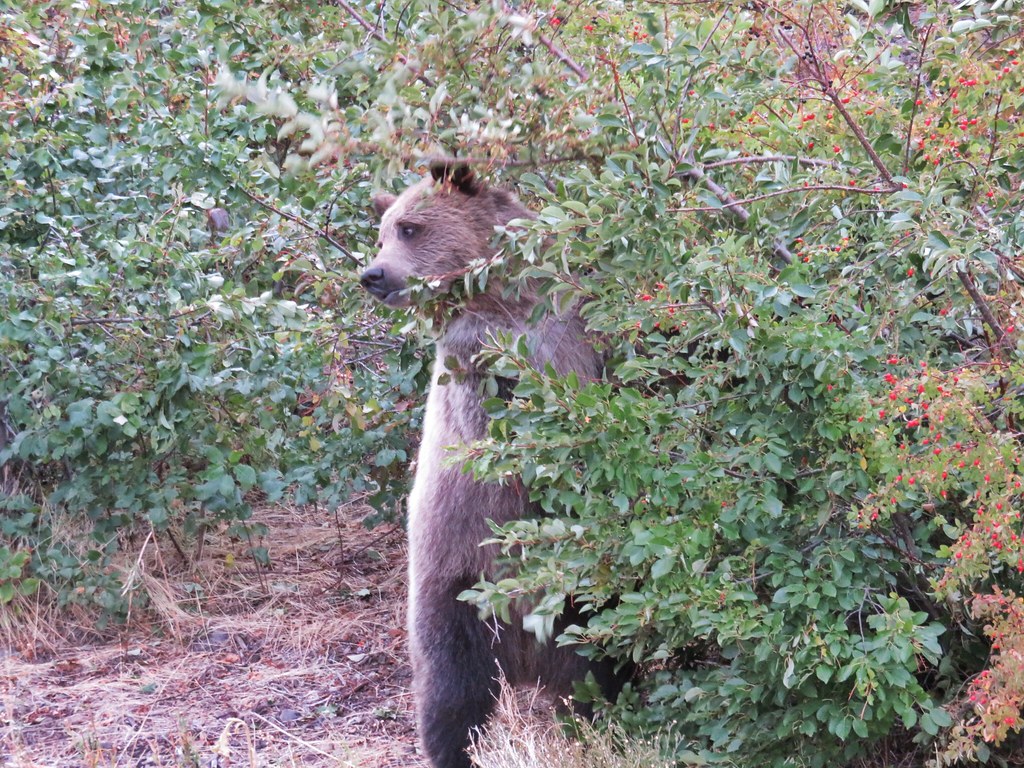 We moved along to a pullout and got a last glimpse of the sweet bear heading off. Half the people left but the remaining half were surprised to see the bear come back towards the road. She stopped to eat and then made it clear to everyone that she was coming down. From the moment we arrived to see this bear there was a group of people standing in the pullout photographing maybe 20 meters from the animal. There were still people standing there now and the bears direction was directly towards them. As she got closer to the people Craig shouted out the window for them to go back to their cars and one guy wisely said “yup, I’m outta here!” While four others remained standing, snapping photos at the front of our van. The bear was then only 15 meters away and I had to speak up, telling the 60 or so year olds to get in their cars! This sort of thing happens every time we see bears and it drives us mad. I told them that if the bear attacks them then the bear gets killed. When the bear was roughly 10 meters away they finally departed and a few even RAN back to their cars! My god I couldn’t believe the mayhem we were watching. It just goes to show how placid bears really are. They don’t want to attack us, they just want to go about their business. Fair do’s if you scare a bear with cubs or get in the way of it’s food then it’s going to fight, but if we as humans had to survive like that we’d do the same.

We closed our windows and the grizzly approached the pullout, looking around and coming close to our van. There was a large gap between us and the car in front so she wandered up to the road where there was a line up of cars on the opposite side. We then noticed one man had parked across the road and blocked the whole road!! I don’t know if he was trying to help in some bizarre way telling cars to move along but the bear was certainly confused to see the route blocked off. One car moved forward as the bear got closer and it scared the bear causing her to jump back past us and retreat along the grassy bank. It was horrible to watch actually. The poor bear just wanted to cross the road and I hated seeing humans prevent nature acting how it wants. I know we added to the chaos by just being another car there, but if a bear is near the road we will always park in a way that we can watch and admire the bear from the safety of our car. It seems other people don’t even think that way, they park 200 meters down the road, run up, take photos, wait for the bear to approach them and run away like the prey that they are. What also annoys us is that the people we see doing this are all over 50 (or younger than 10) and they don’t think about the consequences of what their doing. I can imagine them showing photos to their grandkids “ah look Jimmy, this is when I was face to face with a grizzly bear and I ran away from it and lived to tell the tale!” It doesn’t set a very good example does it!

We decided to leave the area hoping others might follow suit. We left with mixed emotions knowing that that was most likely the last grizzly bear we’d see on this trip. We were over the moon to watch the bear so closely but the high was tainted by also watching the bear being distressed because of humans.

As we headed out of the canyon Craig spotted another bear. This time it was a black bear standing on a precipice half way up the canyon and directly above the road. It seemed such an odd area for the bear to be, like it was stuck there. It was certainly well camouflaged as it looked like a cave to me until it moved. Luckily the bear wasn’t stranded and followed the high canyon cleverly hiding behind trees. We can’t quite believe that we’ve seen 91 bears on this trip and its a total contrast to our last usa/Canada trip where we didn’t see a single bear. We came back to see bears and they’ve certainly given us a great show and we are extremely lucky to of had so many memorable experiences. From our first grizzly walking right past us while we were having a shower outside our campervan to raising our pepper spray at a black bear while hiking. It’s been one hell of a ride!