We woke up to rain which was a bit odd after so many days of sunshine, but it was fine as today was going to be a wildlife day. We planned to drive along the Lamar Valley all day searching out Yellowstone’s famous animals. The valley is said to be prime habitat for predators which we so desperately wanted to see.

On the drive we spotted our first bear in Yellowstone, it was a black bear who was busy eating anything he could find. I’d read that just south of the Tower-Roosevelt Junction was a good area to see Grizzlies so we headed there and as the road began to climb the rain gradually changed from liquid to solid and it was snowing!! We pulled up for breakfast with a valley view and snow all around us. The snow was setting really quickly and was the best sort for snowmen, snowballs, igloos, all the fun shit that snow brings with it. I only managed to pick up a bags worth for our cool box before it became unbearable and my fingers were frozen. 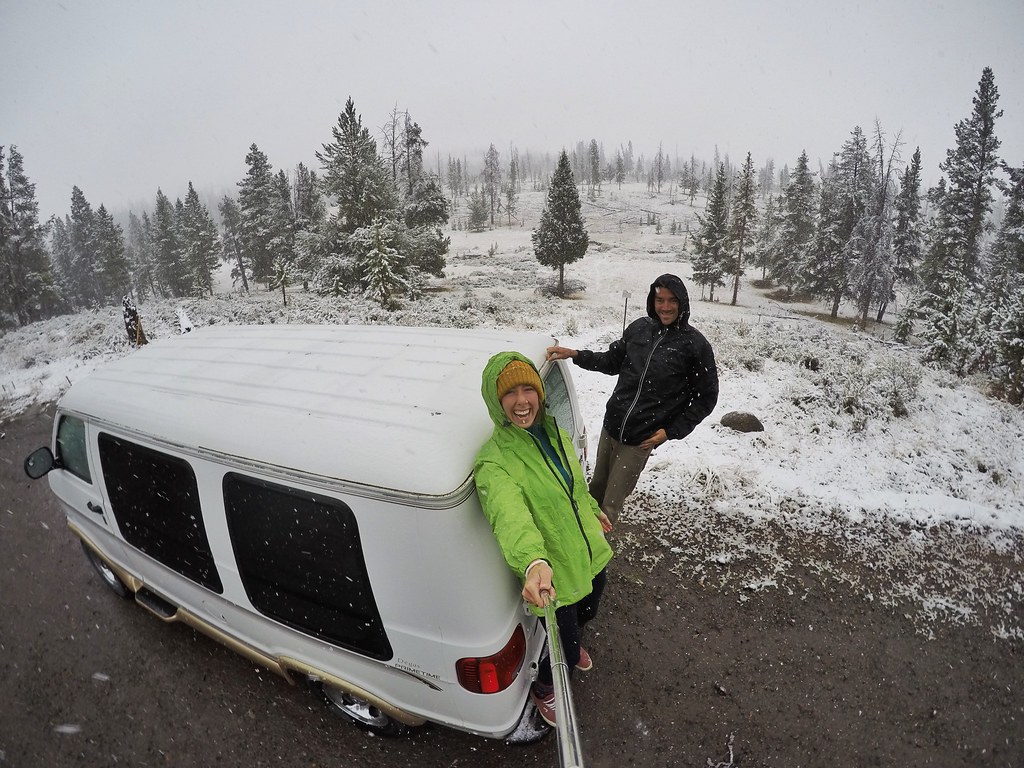 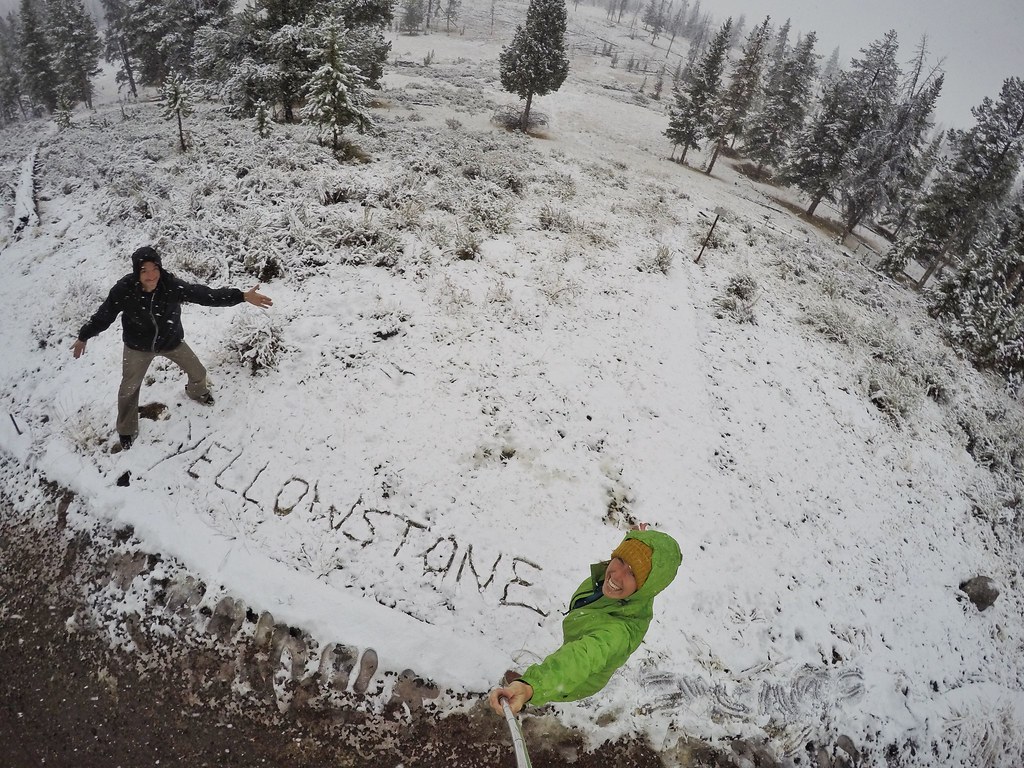 We drove back to the Tower Junction without seeing any wildlife and ventured east along the Lamar Valley in search of wolves and bears. It’s here that wolves were reintroduced to Yellowstone in the 90’s. They had been hunted to extinction in the park but their population has sprung back much to the local ranchers dismay. 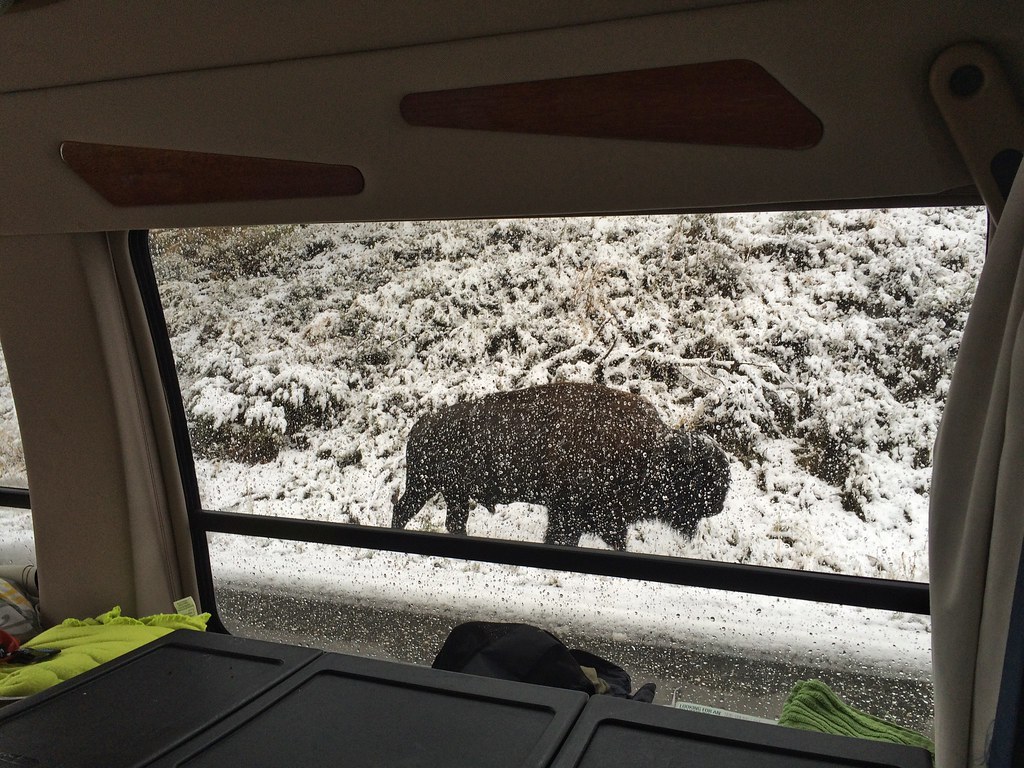 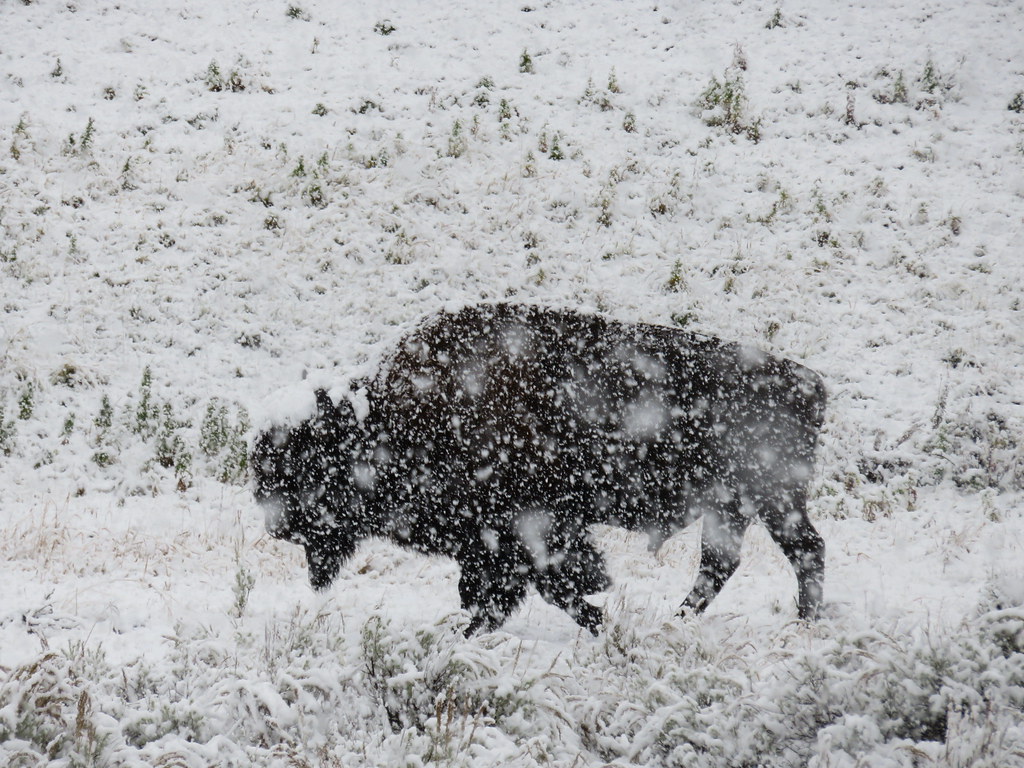 We began the drive with a few Pronghorn Antelope near the road who were very picturesque. The road was a lot quieter than the rest of the park so we could drive really slowly and scan the valley. This route also gained elevation and once again we reached the snow line and entered a winter wonderland. The snow became really heavy and we had total blizzard conditions at times. Suddenly our chances of seeing wildlife seemed laughable as the visibility was so poor and every photo we took was covered in white dots. We saw lots of bison along the roadsides and far away on the hills. A herd in the distance were running around like hooligans and others by the road had a right shock after a stupid driver didn’t move or slow down for them. The more it snowed the more beautiful the bison became as the snow began to set on their fur. We spent the whole day driving at about 15mph and stopping a few times for lunch, tea and dinner. One coyote ran by while we were eating but that was all. We were a little disappointed really, we desperately wanted to see wolves! 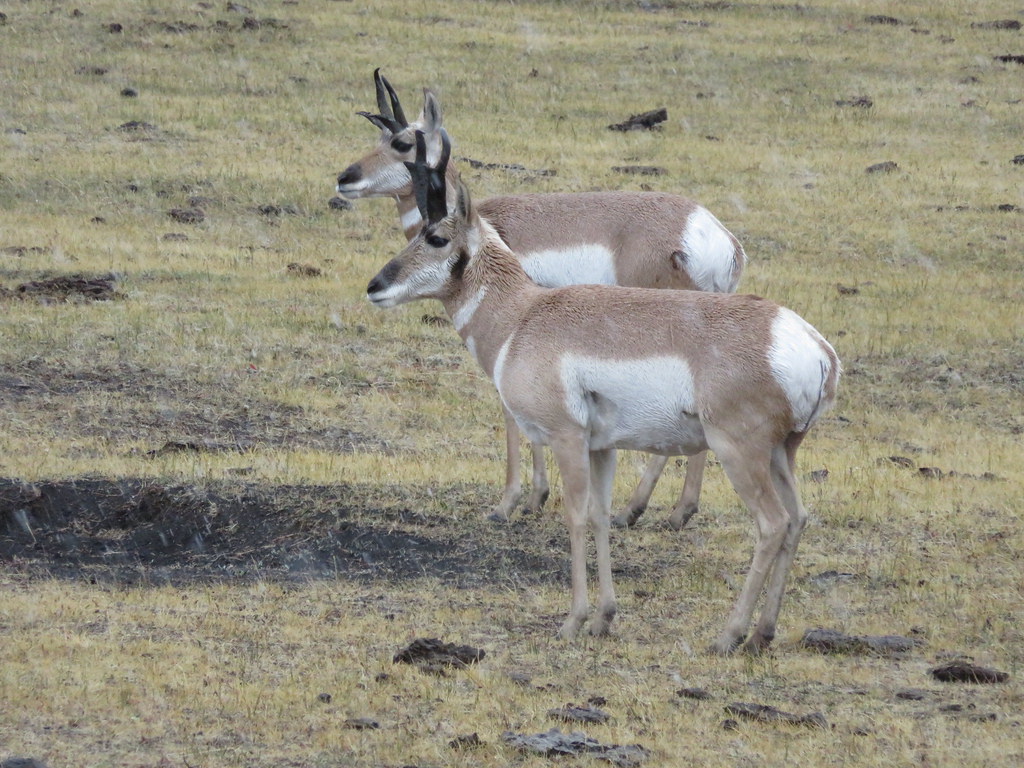 We exited the park at the north east entrance just before dusk. Silver Gate was a tiny village at the exit and looked amazing with the log homes caked in snow. We found a pullout to camp in and it began to snow heavily again. It was then that we realised how unprepared we were for conditions like this. On our last trip in 2010 we travelled through winter so had chains and a shovel (from the dollar store which snapped on first use) but now all we’d have to help us would be an oar from our boat. It was a bitterly cold night wearing our warmest clothes and piling towels on top of the bed for extra warmth. We survived the night and weren’t snowed in so that was great news. Craig set about scraping all the snow off Daphne that had turned to ice and we drove off at 7am to maximise wildlife spotting. The snow had stopped but the area remained coated in white and it made for a wonderful drive. It was so peaceful early in the morning and as we cruised along a section of road with towering trees draped in snow we spotted a black figure ahead. It was a bison and he was walking bang on the middle yellow line right towards us. We couldn’t believe how strict he was at sticking to the line, like he was on a a tight-rope or modelling on a catwalk. A car suddenly came up behind us, overtook us and then headed towards the bison who very reluctantly moved to the side for the car to go by and then resumed his spot on the yellow line again. 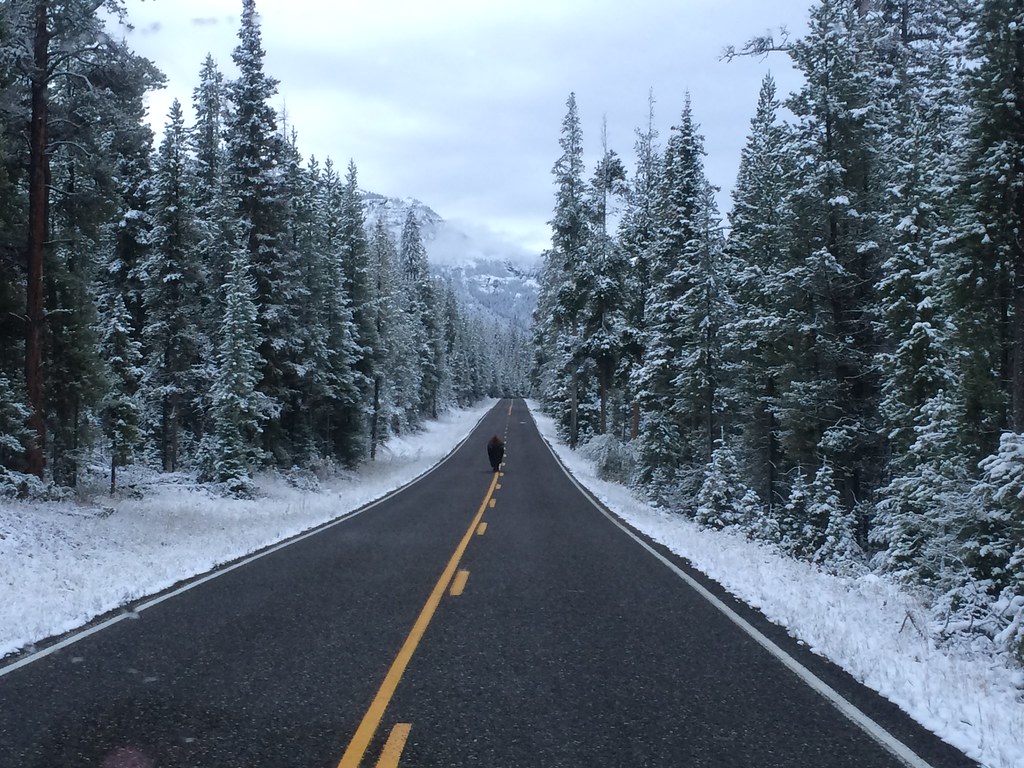 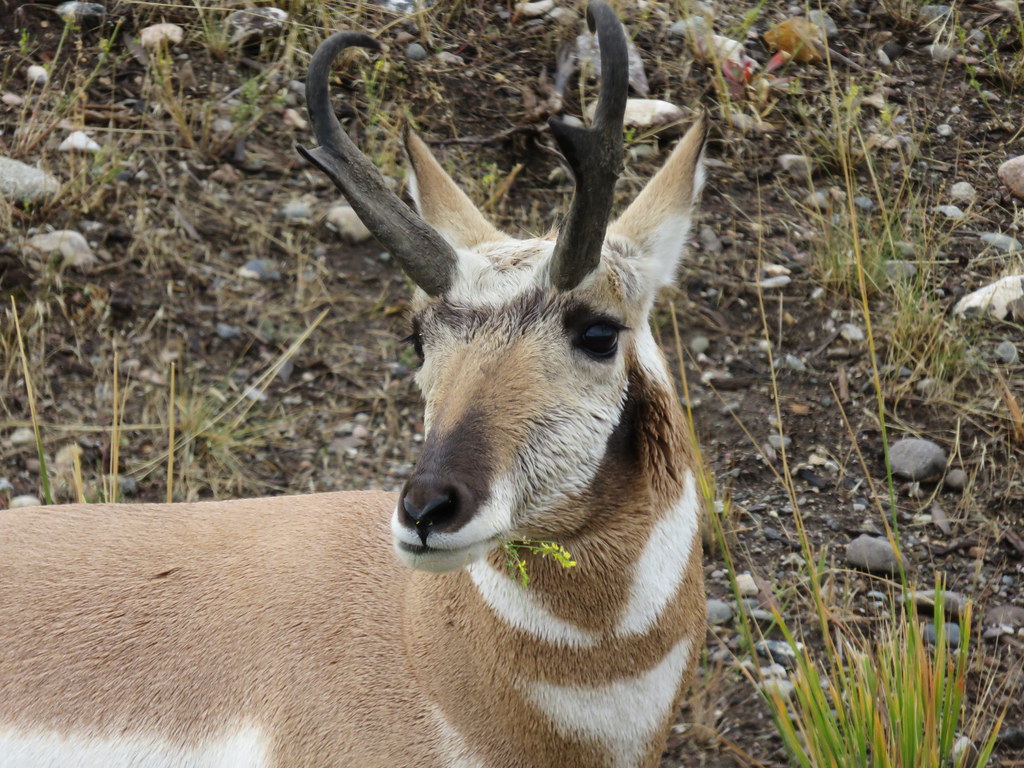 We had that déjà vu feeling as we drove along the Lamar Valley again seeing just bison and pronghorn. We realised the road wasn’t good for us, maybe if we had binoculars, a telescope or a super-duper camera we could scan the area but the valley was so wide that our chances of spotting an animal seemed slim to none. And due to the wide, flat, valley the road wasn’t an ‘animal corridor’ like it can be in narrow valleys so we changed our plans. Originally we were going to drive back up the Valley, for a 5th time, then exit the park via the Beartooth Highway, said to be one of the most scenic drives in America. But, it rises to nearly 11,000ft and was closed due to the snow storm. There was an alternative scenic road that way but we decided we didn’t want to drive the valley anymore, instead we’d head south and exit the park in the east. 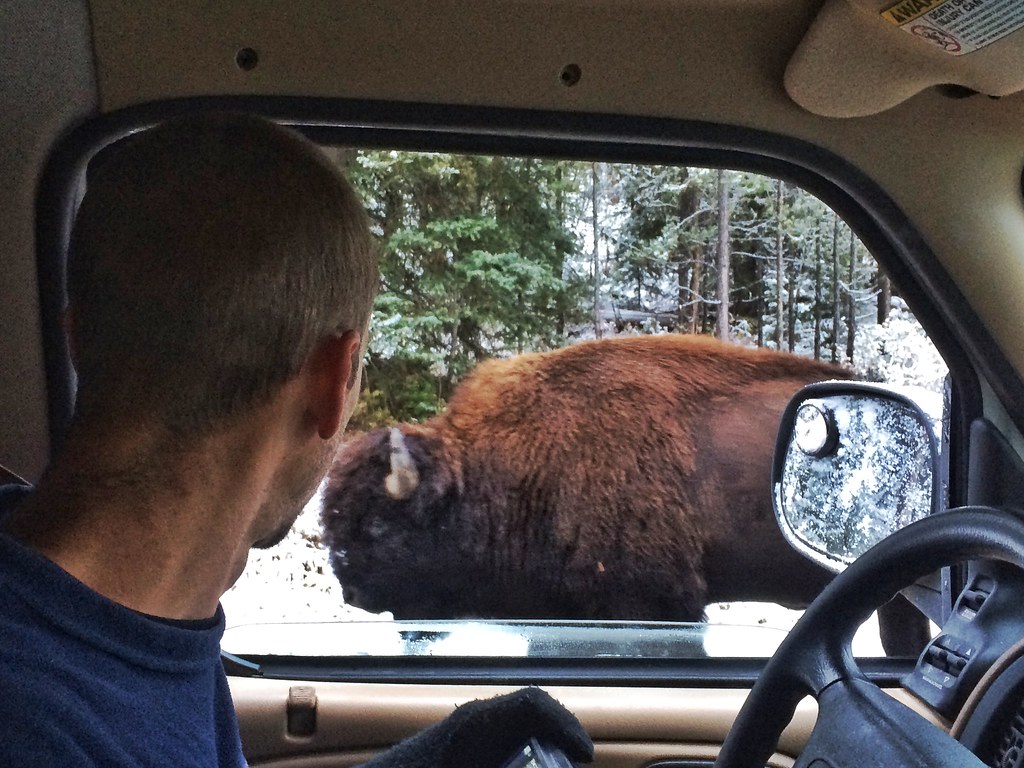 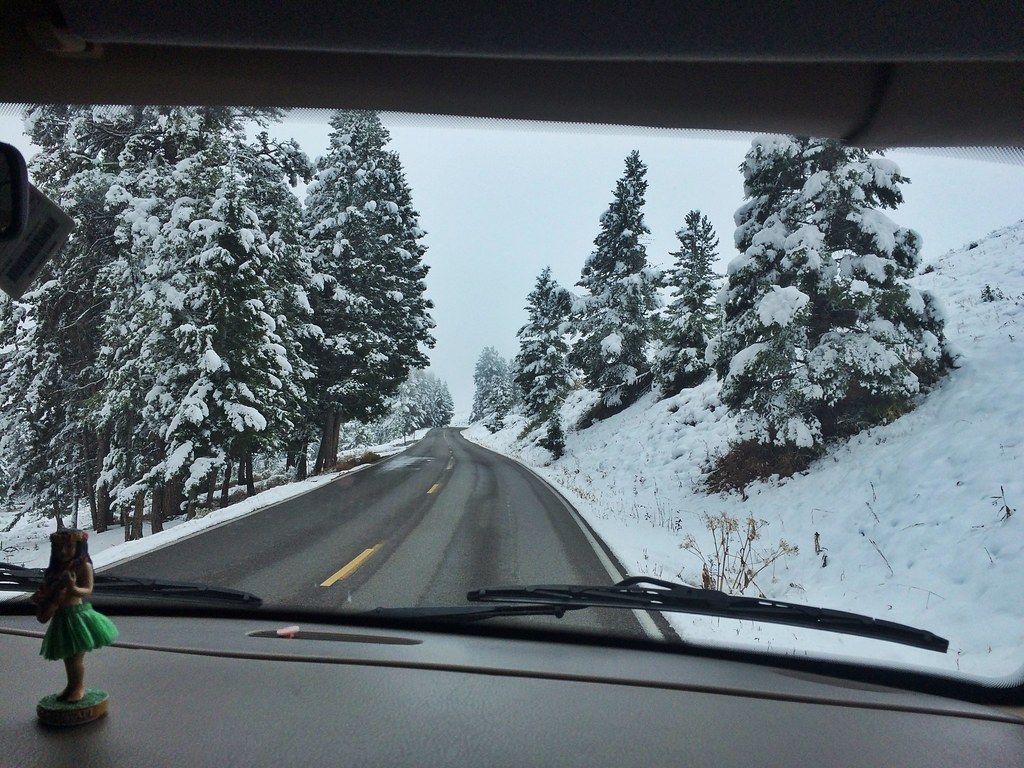 We climbed up the Dunraven Pass at 8859ft which had a nice gradient and after a very Christmassy feel through the snowy pine trees it opened up to blankets of white as our road skirted along bald hill-sides. Our decision paid off as we saw a few cars pulled up and knew it had to be a bear. We managed to park in a pullout off the road but other people were parking up wherever they pleased and a bear-jam quickly formed. Up on the snowy hill was a black bear and cub who were beneath a tree eating pine nuts. The mum would occasionally look up with a big snowball in her mouth where the nut was covered in snow. Some people had parked on the snowy bank and began to slip down so a few people were helping to dig away the snow before they attempted to drive anymore. 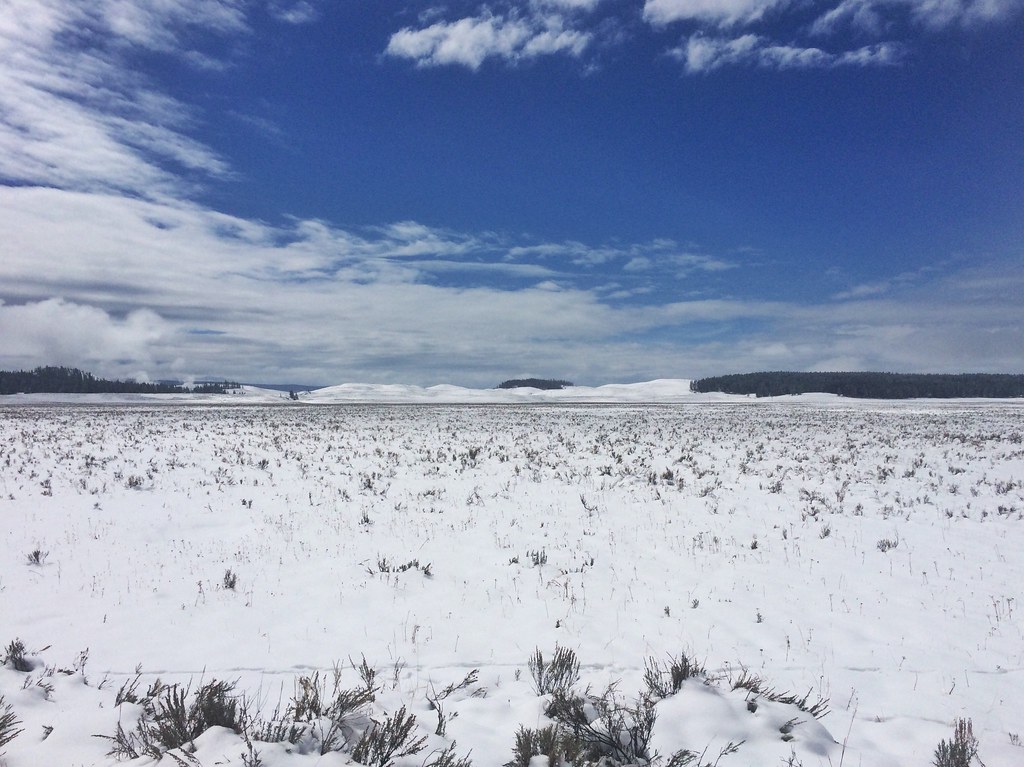 A chap we got chatting to earlier told us he saw a grizzly west of Canyon Village this morning and said it was digging up the ground and might still be there so of course we went to try our luck. It was obvious where the bear was as the road was lined with cars and three Rangers were having to keep traffic moving and parked cars were to have all wheels behind the white line. About 30 people were standing taking photos of the bear who was pretty far away. He was onto his second area of digging and surrounded by two mud-pits where he’d wrecked the ground looking for anything to eat. We set off after watching him awhile and went back to the Canyon Junction. 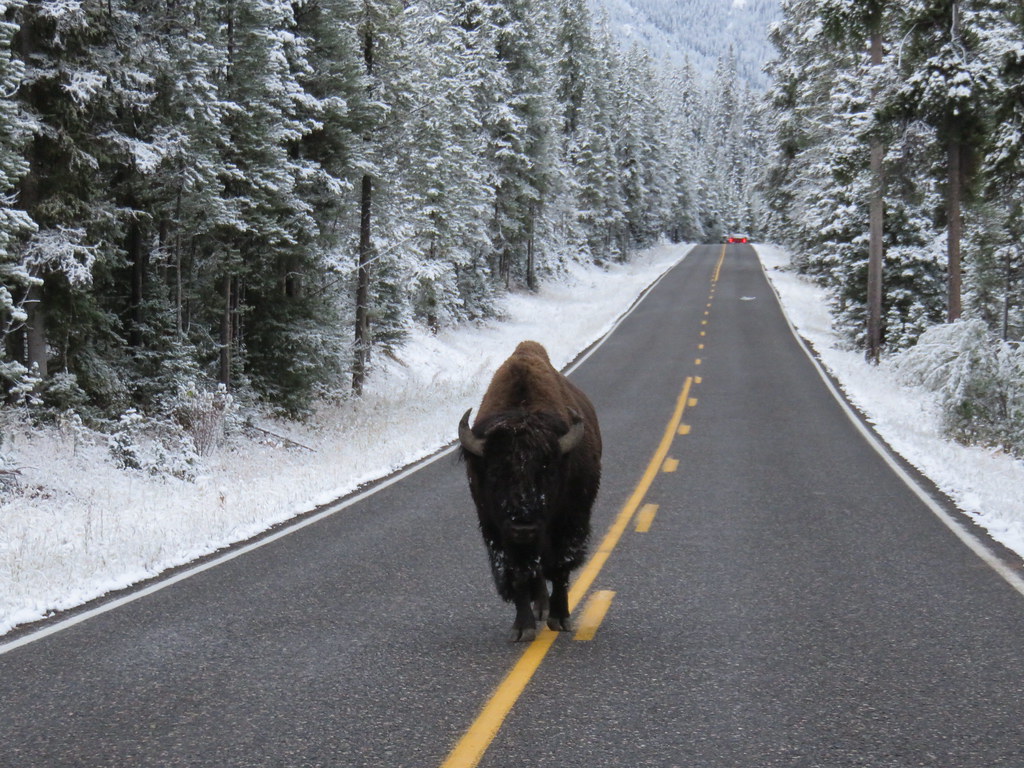 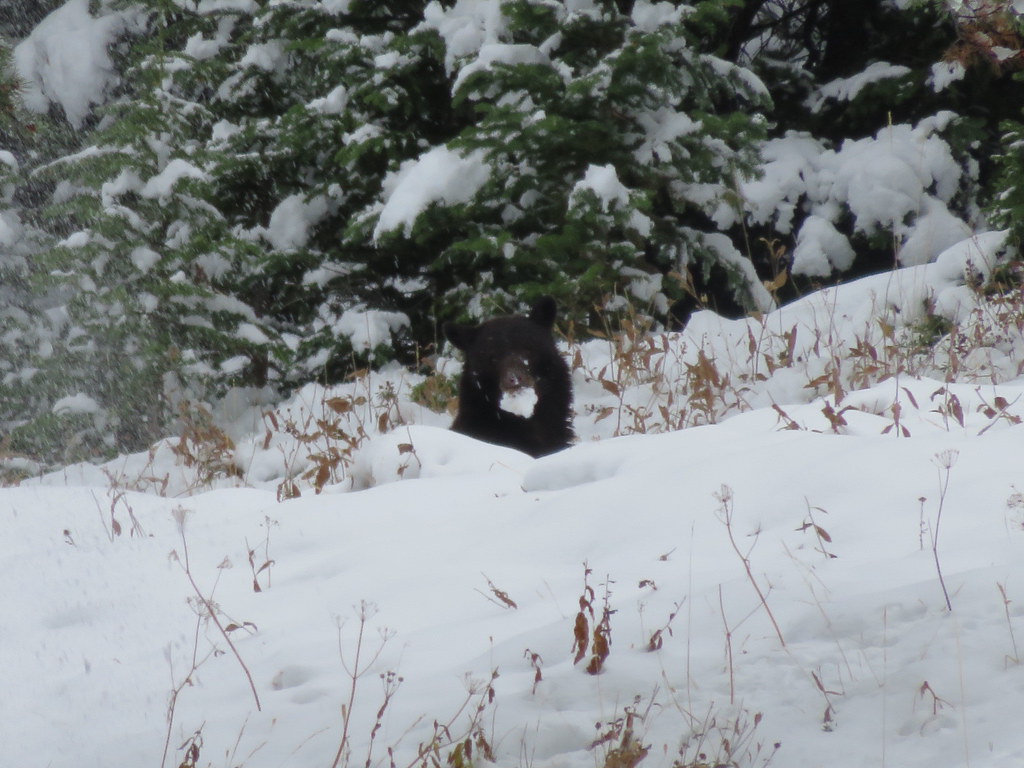 Hayden Valley is also known for being a great spot for animals and we saw hundreds of bison when we came here a few days ago but the snow must’ve moved them somewhere else as the area was really quiet today. The Yellowstone River looked very scenic with white banks and swans swimming in the cool water and the trees were all dropping huge slabs of snow as the weather warmed up. We pulled up where some other cars were and zoomed in on our camera to see what everyone was looking at. Waaaaay up on a hill I’d guess at a mile away was the carcass of a bison. On top or the black body was a grizzly sow and two cubs!! We could barely see in our camera but it was obvious what we were looking at. In the meantime one lone bison was obliviously walking their way. On a ranger talk later that afternoon the lady said it would of been wolves that took the bison down, the bear would then come along, scare the wolves off and steal the meat. She also said that early this morning wolves were on the carcass, goddam! 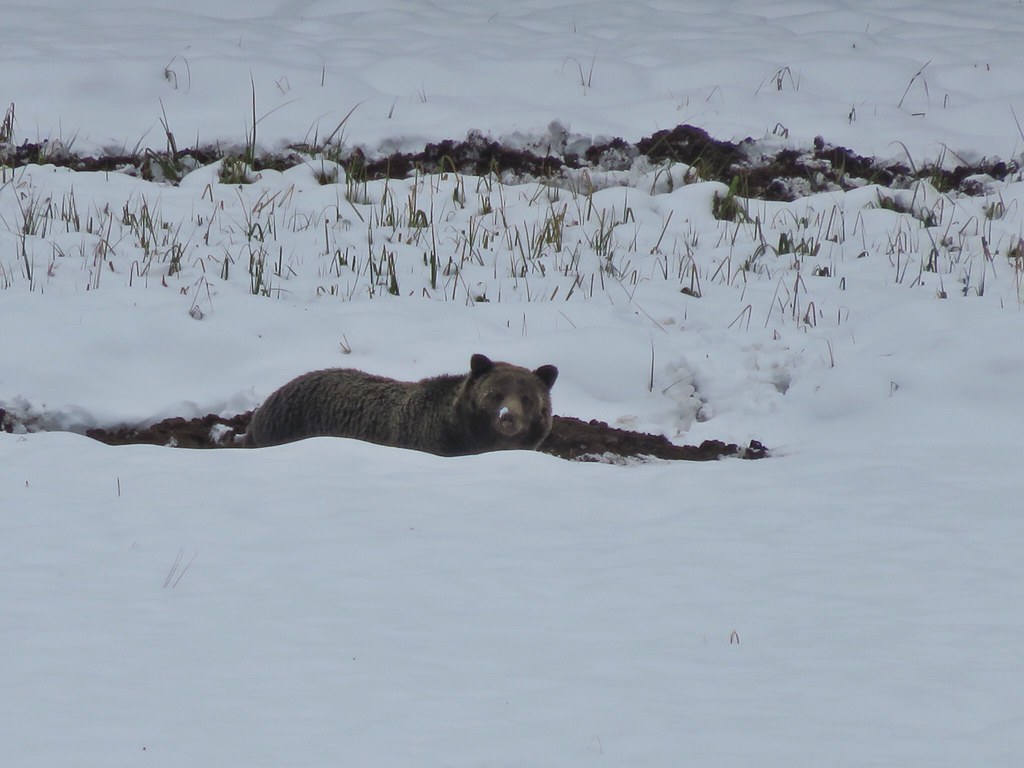 The eastern exit to the park went along the shores of Yellowstone Lake where the water was surprisingly calm for such a huge lake. We went past a few lovely big bays and had steaming volcanic activity the other side of the road. Another easy pass up and then it was the long down hill out of the park where we left for our final time. Boy were we glad we changed our route and came this way as we ended up seeing 6 bears! None of them were close up but it was still wonderful to watch them all feeding up for winter time.

We loved Yellowstone and it certainly didn’t disappoint! I particularly liked the colourful pools and so many up-close encounters with bison. At times it felt like the park was overdeveloped but in reality the average tourist only sees such a minuscule part of the park and the rest is pure wilderness. We loved how close the boardwalks got us to all the sights, so close that water from geysers wet the trails, mud splattered across them and steam freshened our faces. For us it was the ideal park to explore on the cheap, National Forest surrounds the park so pretty much any exit takes you to a place to camp for free.