After a lovely morning at Yellowstone’s Canyon and lunch with a herd bison we headed west to the Norris Geyser Basin. It’s one of the hottest, most acidic areas of the park. The Porcelain Basin trail had colourful pools which were quite different from the others we’d seen. They were less clear here and more milky. One pool had pink edges and a milky blue centre which looked like laundry powder melted in it. There were green streams below the boardwalk and pretty aqua-blue pools. A longer walk took us to the worlds tallest geyser, Steamboat Geyser. Full eruptions are rare so we just witnessed a bit of casual squirting in its minor eruptions. Nearby Minute Geyser used to have a road leading right to it and back in the day visitors would throw rocks into the geyser to watch them fling back up towards the sky. There’s only so many rocks a geyser can handle and humans choked it up, a ranger said its now known as minúte geyser. Scientists have put a probe into the Old Faithful geyser and at about 20ft down it narrows to 4 inches, so you can easily see how a few rocks could destroy such a fragile piece of nature. 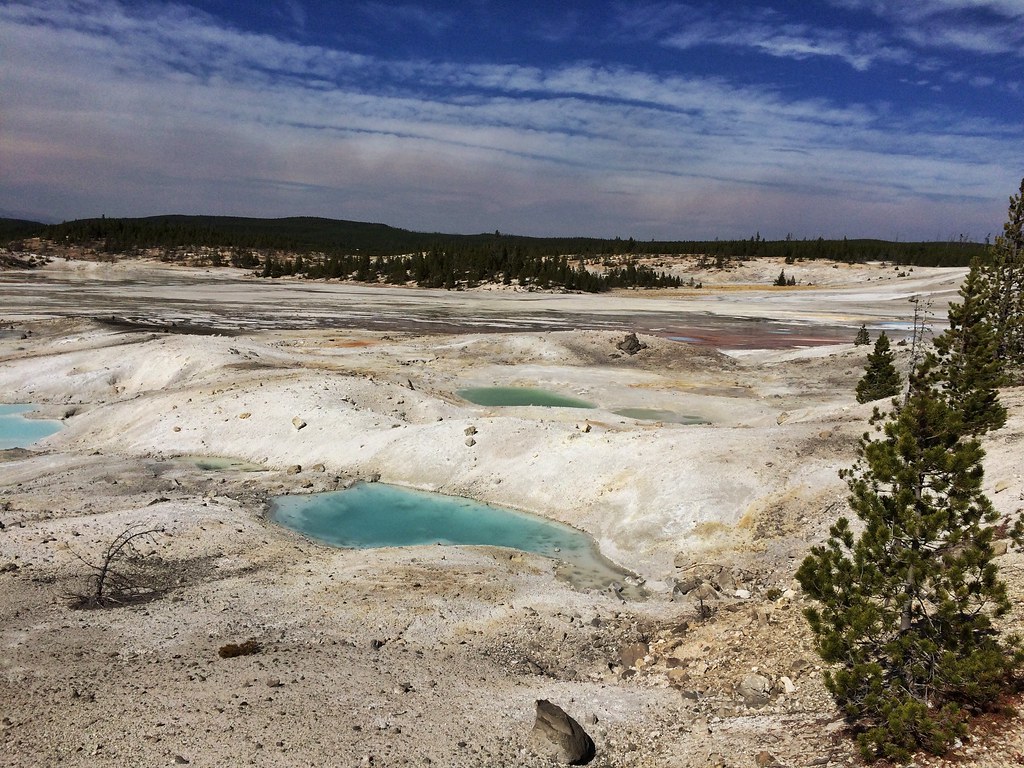 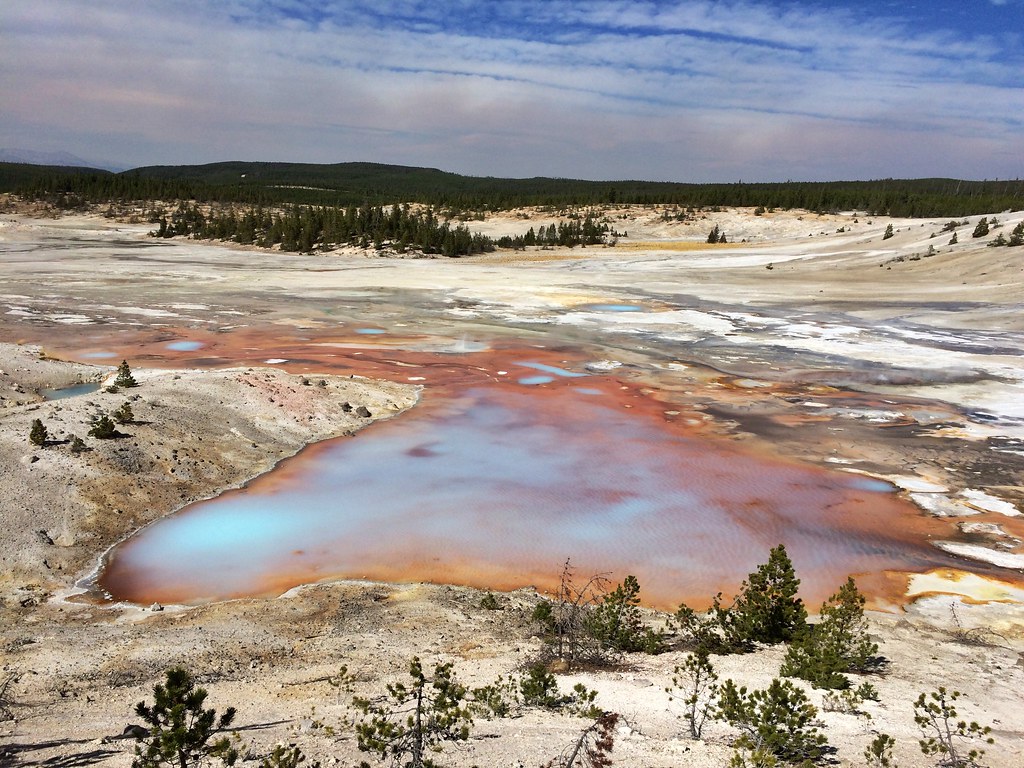 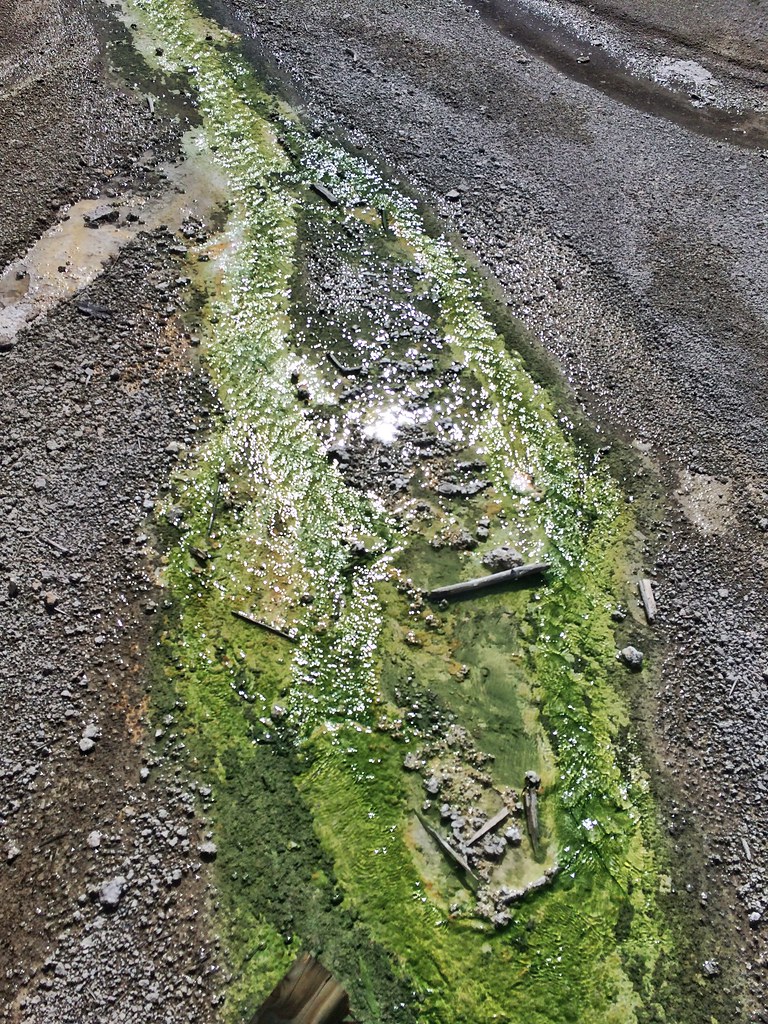 Wildfires in the distance became really obvious throughout the day and huge mushroom clouds billowed up through the sky like a bomb had just exploded. We drove north to Mammoth where we passed a crashed car that had come off on the straight and landed in a dust pit. They seemed to be giving a statement to rangers so I trust that everyone was ok. After forest and lakes the road suddenly went through a canyon before leaving the river and driving through a landscape of boulder rocks, it was quite bizarre how quickly it changed. We did the Upper Terrace Drive and parked at the top to wander around the boardwalks. The terraces were really unique, they were made from calcium carbonate which erodes over time and as the springs trickle down its creates layered pools. The terraces weren’t everywhere like I envisioned though, most of the area seemed to be old terraces where they’d all dried out and turned the colour of a gloomy day. But the active ones were fabulous and one was ultra white in colour with less defined terraces so it looked like a wedding cake covered in really messy icing. From the lower terraces we viewed a really stunning area where little circular terraces looked like melted candles all piled up together. 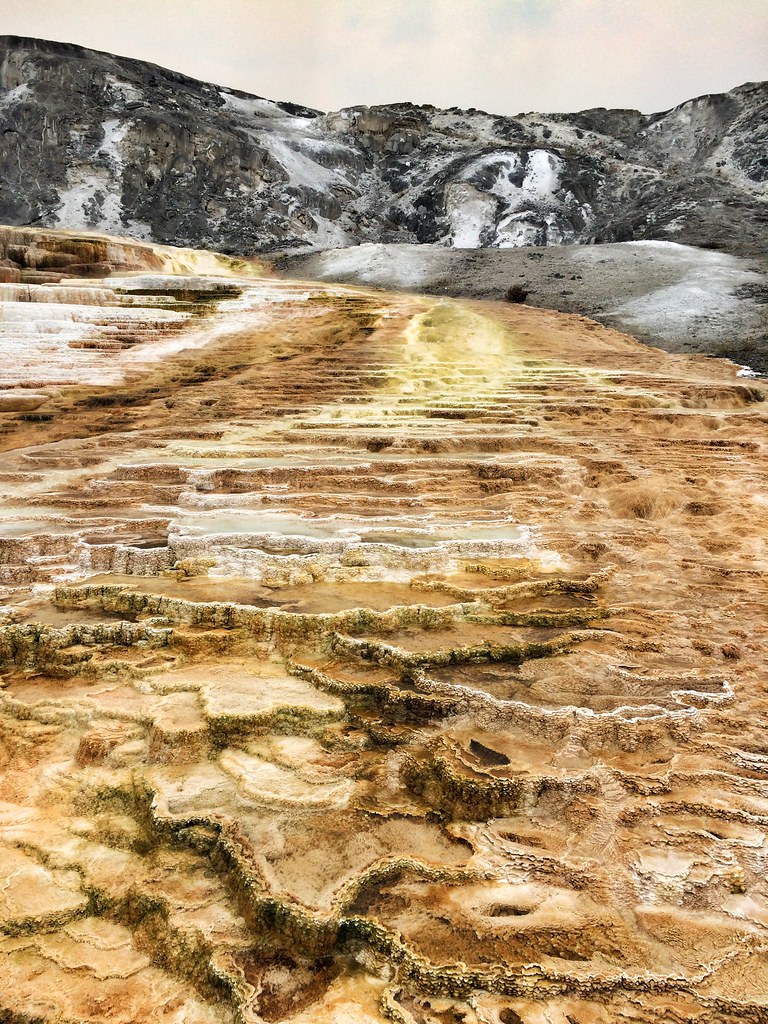 A couple miles north of Mammoth Village was an attraction known as Boiling River, which was the only hot spring I could find inside the park for a swim. We quickly had dinner and rushed down to the river. It was a longer walk than I’d anticipated and I started wishing I’d brought some warmer clothes for the walk back. We passed a mule deer right beside the path, I think their one of the cutest looking breeds of deer as they have huge donkey-like ears. Suddenly the steaming area of the river came into sight and we were surprised how busy it was, it was quite the change after tranquil Idaho. 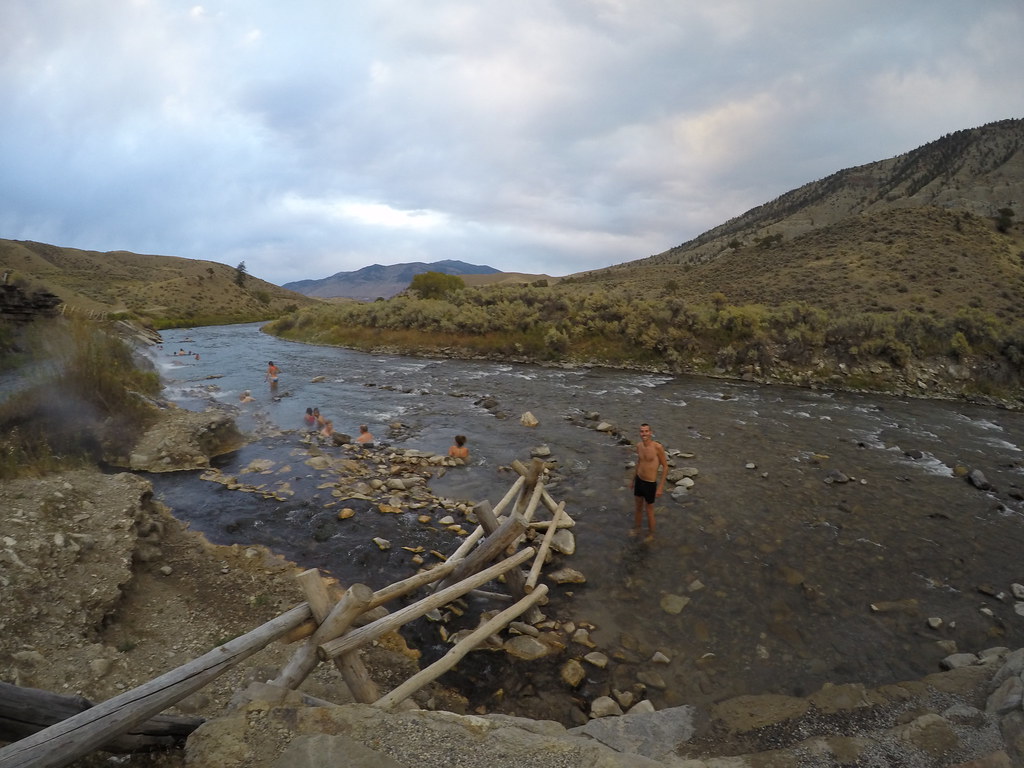 There was a wooden seating area and steps leading into the river where I cleverly stepped right into the flow of the boiling river and shot right back out onto land. Holy crap! They don’t call it boiling river for nothing! The boiling river flowed over rocks and into the cold river where rock pools were made. To reach the pools we had to carefully walk through the icy river where the current was surprisingly strong and the slippery rocks below were hidden in the dusky night. I gave up quickly and just stopped at the first pool; knowing me I’d slip on a rock, get scalded by the boiling river, then hypothermia from the freezing river and swept down the Rapids. I sat down ready to relax and my body all tensed up as cold water covered me. I carefully shuffled towards the hot water and felt like I was being cooked alive by cannibals. Eventually I found a spot where if I laid sideways I could get a nice warm temperature around me 70% of the time, the rest was either ice cold water swirling around me or scalding water melting any skin nearest to the surface. I’d have to quickly sink down as the water was cooler at the bottom of the pool so the burning sensation would move from my chest up to my neck until I couldn’t take it anymore and I’d start sloshing cold water over to save me. In the meantime Craig tried to venture to the ‘cool people’ pools. He didn’t make it far after burning his legs so he came back to my not so tranquil spot. When people from the other pools made their way back I was glad I didn’t even try. The sun had set so it was impossible to see rocks and obstacles and they were falling over like drunk zombies. Then like clockwork they’d reach the really hot area and all start jumping out the water while I sat their smirking in my oh so perfect pool! It certainly wasn’t our favourite hot springs but it was an experience nonetheless. We left before it was totally dark and nearly stepped on a 2ft snake who creepily retreated into his lair which was a rock ledge right along the path. We were rather surprised to see an Asian family with two young kids turning up so late for a dip. It was actually a really dangerous hot spring, let alone at night time!

It was horrible driving out the park at dark as we were worried we’d hit an animal. We passed another crashed car who looked like it had just hit a deer as the front side was all smashed in. A car had already stopped to help and we saw the police arriving behind us. We were exhausted and couldn’t wait to hit the sack ready for another day in the park tomorrow.