We woke before the sun and opened our blinds to see smoke surrounding us. The wildfire in west Yellowstone has been a pretty big one and there was obviously a change of wind as the air was thick with smoke and the sunrise looked like a smoggy Asian one. It did clear soon after arriving in the park and we had another blue sky day. Herds of elk were in the grassland close to the road. It’s now the rutting season so we got to witness a big bull elk bugling where he makes a funny deep sort of scream while scrunching up his nose. There’s usually just one male in charge of a whole herd of squeaking females. One herd seemed to be trying out two juvenile males with tiny racks and very humpy natures. 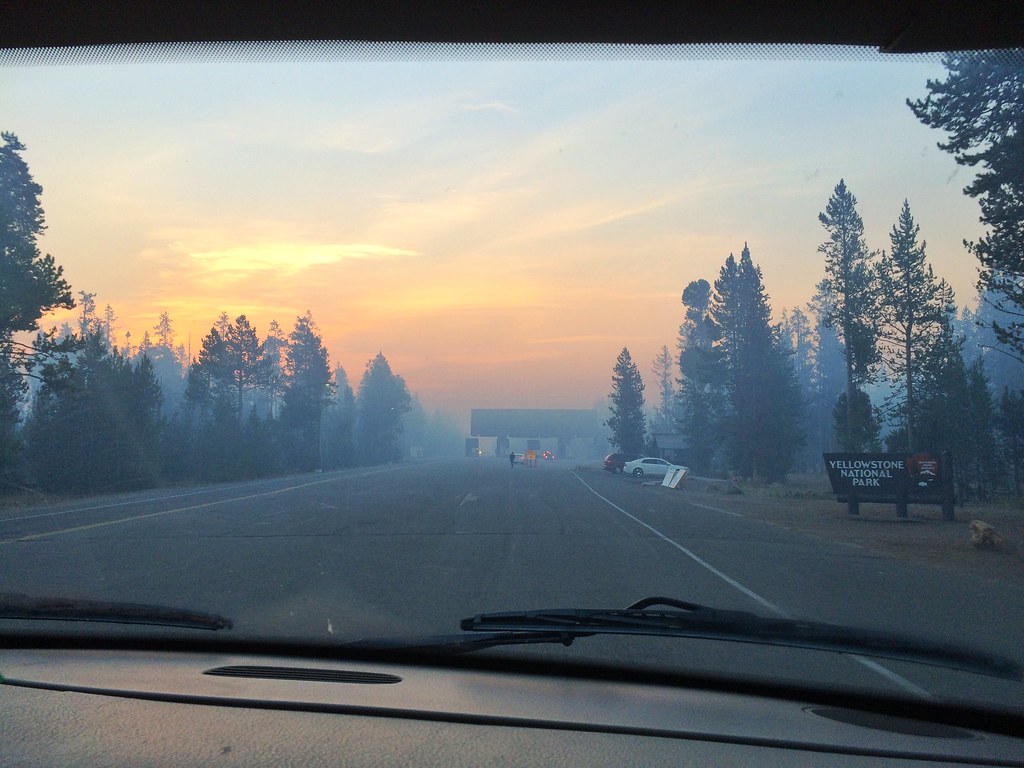 Today we headed east to ‘The Grand Canyon Of The Yellowstone’ stopping en-route at the Artists Paint Pots. We were expecting a viewing platform but instead a 1 mile trail led us around some sights. It was so damn cold early in the morning and we weren’t dressed for a walk. We could barely talk to one another as it felt like our faces had frozen solid! There wasn’t anything that resembled paint pots but one pool was bubbling mud so violently that it was splattering onto the boardwalk. The whole area was full of steam as the hot pools reacted with the arctic morning. 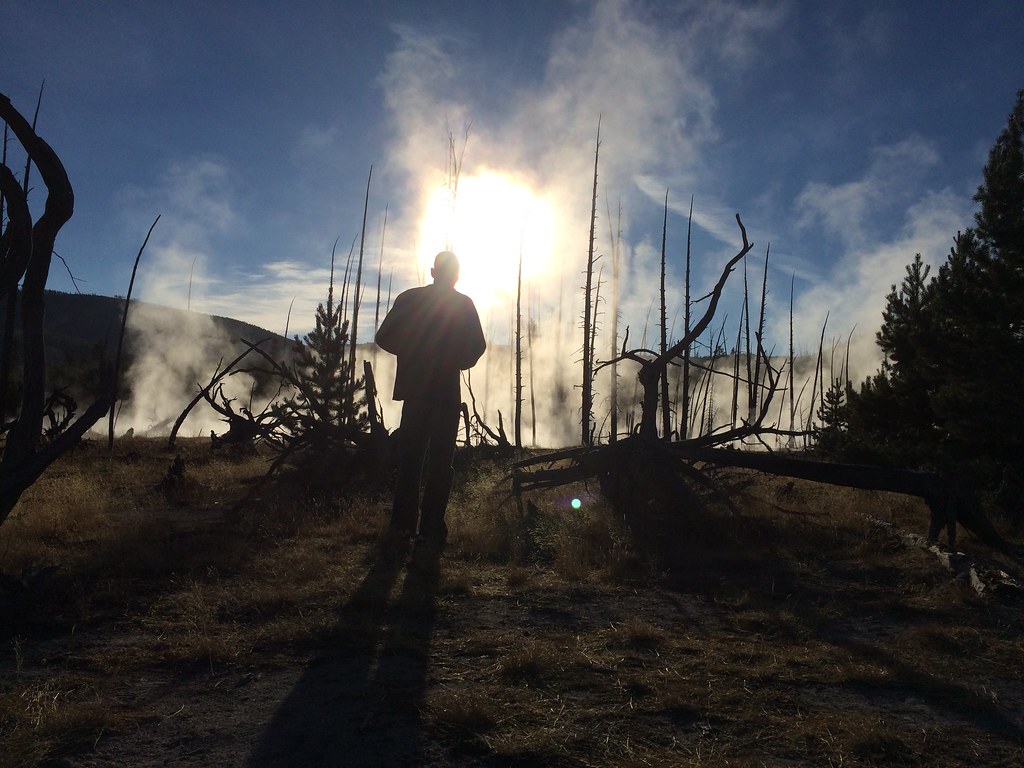 Once at the busy Canyon Village we drove along the South Rim to admire the canyon. At the start of the road we stopped to do the popular Uncle Toms hike. The trail led us 600ft down into the canyon via metal steps that seemed to be built on quite a precarious cliff. The canyon was quite something; the walls were coloured by volcanic activity and ranged from beige and orange to yellow and red. The creator of the canyon, the Yellowstone River, gushed through the narrow base where walls up to 1000ft high rose above it. Two waterfalls plummeted down the canyon and our walk led to the Lower Falls where the huge drop sprayed water through the canyon and presented us with a constant rainbow. As we reached the bottom viewpoint I somehow managed to roll my ankle and do a 360 degree pirouette that ended with me loudly crashing into the metal fence and my sunglasses flying off my head. Luckily Craig decided to help me sort myself out as appose to laugh in my face before anyone else noticed my clumsy fall. Further along the canyon we visited Artist Point where we were treated to a view down a long stretch of the canyon and the falls at the end. It was an incredible sight and one of the prettiest canyons we’ve ever seen. It’s only day two in Yellowstone but the diversity of the park is amazing us, volcanic pools one minute, dense forests the next and then the ground drops 1000ft into a deep canyon! 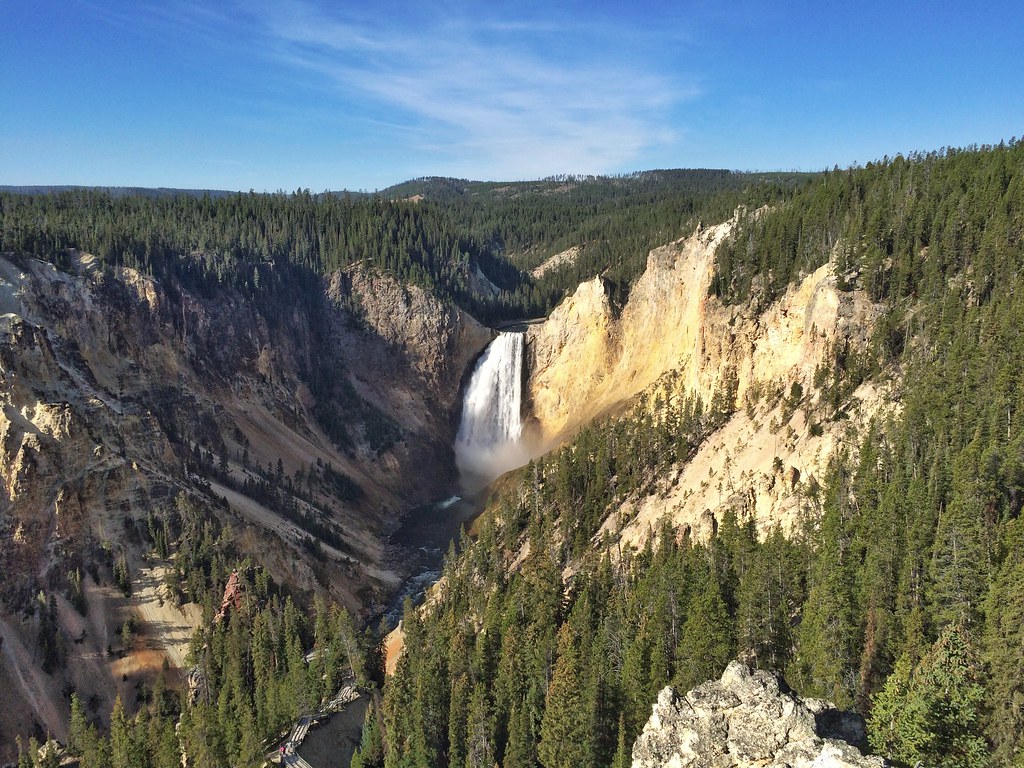 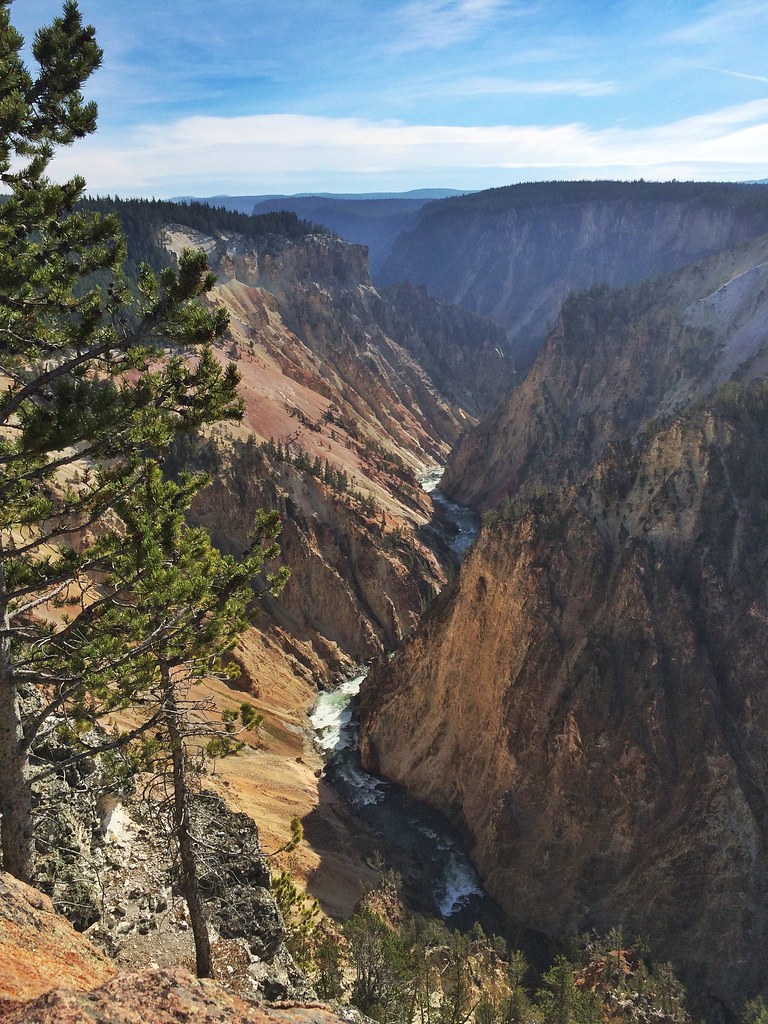 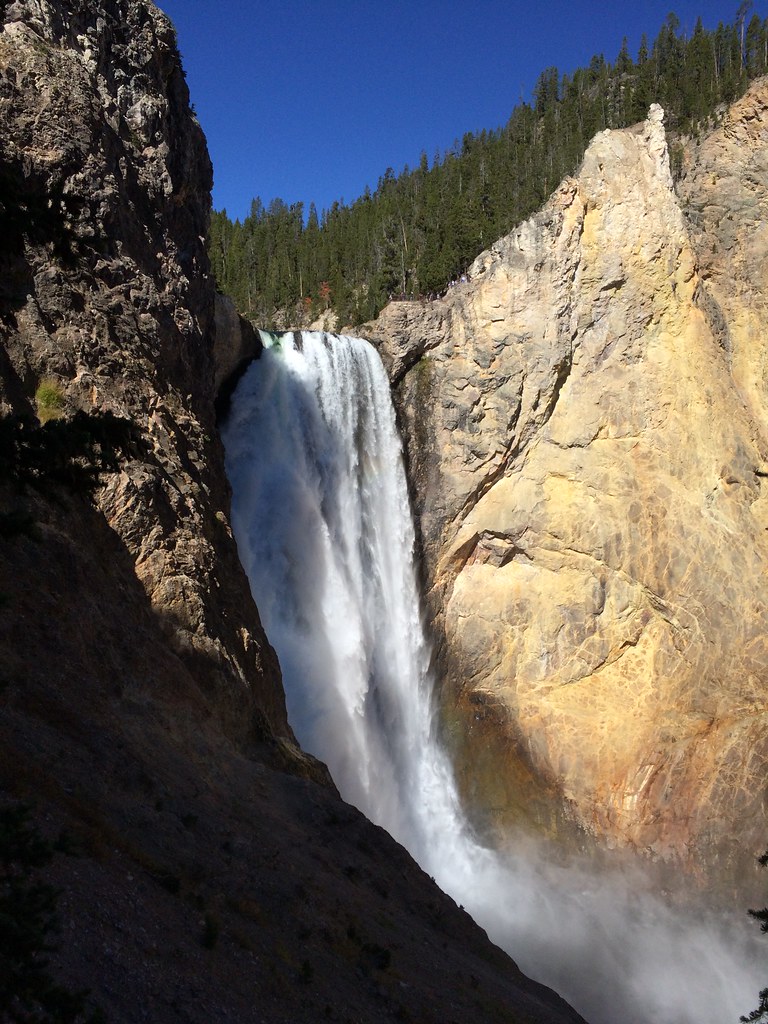 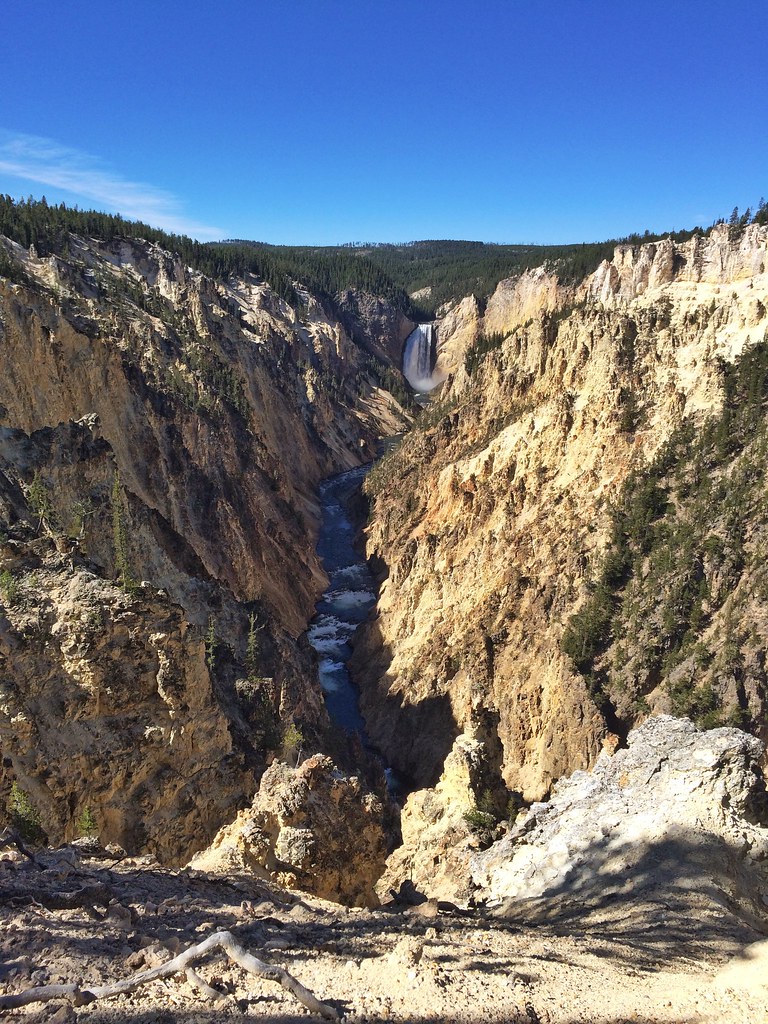 In the afternoon we drove along Hayden Valley which is said to be a great place to view wildlife. We eventually spotted our first herd of bison, or herds, I’m not sure but hundreds were scattered across the hillside so we stopped there for lunch. Just 200 meters down the road we came across a busy little carpark surrounded by bison! Well, maybe lunch would of been more exciting here than watching dots on a hill! The bison were all grazing on the grass verge right by everyones cars. There were cute youngsters and lots of big males with their hilarious flat faces and grumpy looks. Half the herd were close-up while the others were across the river and some were swimming our way which was exciting to watch. Most of their body would be underwater in the middle of the river and then they’d touch the floor, walk up and have a good old shake-off like a wet dog. We watched the males trying to serenade females by not leaving their sides and doing various snorts and grunts to them. We drove as far as the Volcanic Mud Pools where steam billowed out of caves and mud splattered and bubbled at the surface of the hot pools. That was as far south as we were driving today as we wanted to drive the Norris to Mammoth road before it closed for construction tonight at 10pm. So we headed back and traffic began to really slow. We soon saw why, a lone male bison was walking in the middle of the right lane towards us. Traffic behind it had no option but to go at the bisons speed. We were lucky that our lane was clear so we took some photos and drove on where we were shocked at the backlog of traffic it had created. There must’ve been over a hundred cars behind the bison!! 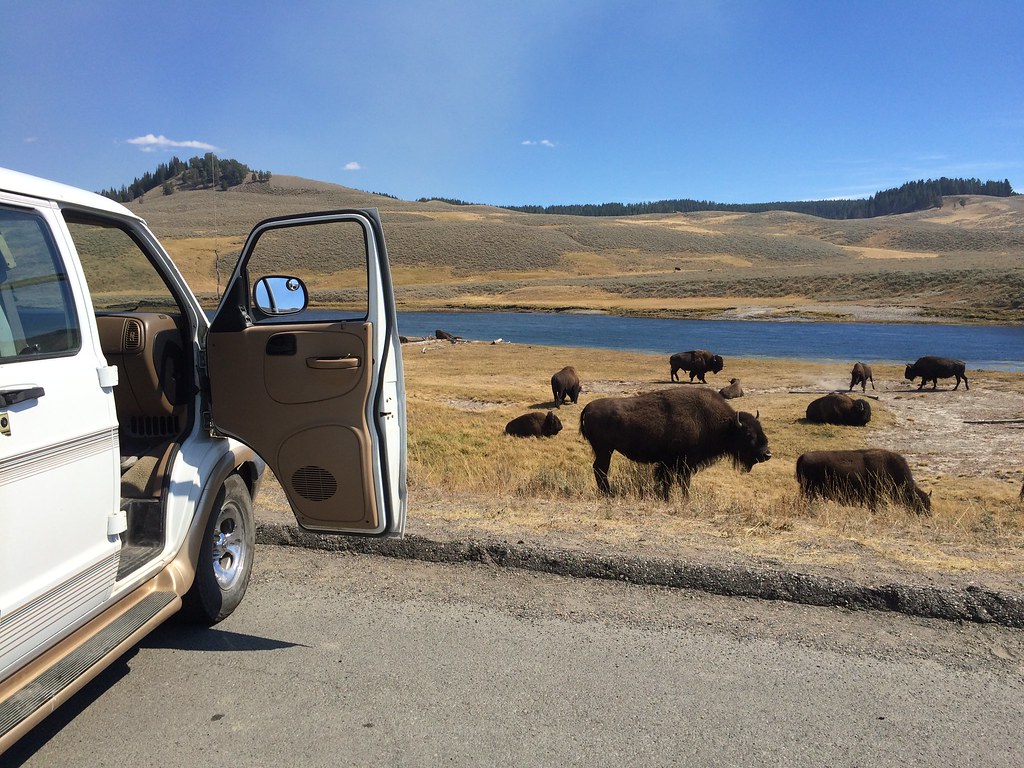 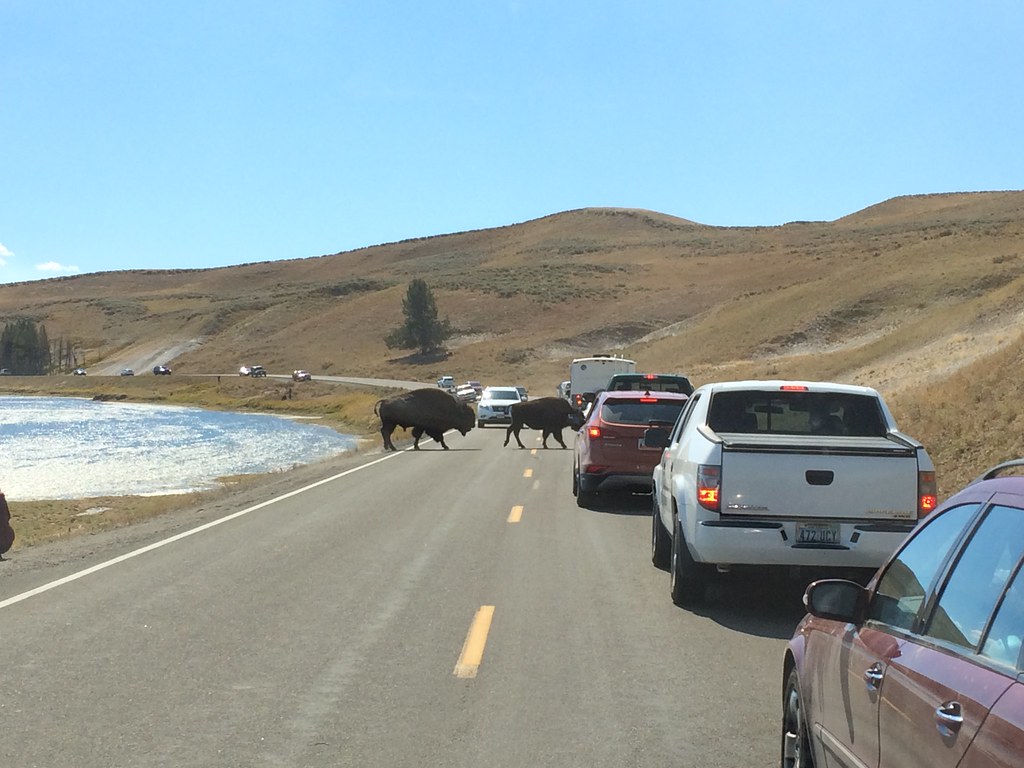 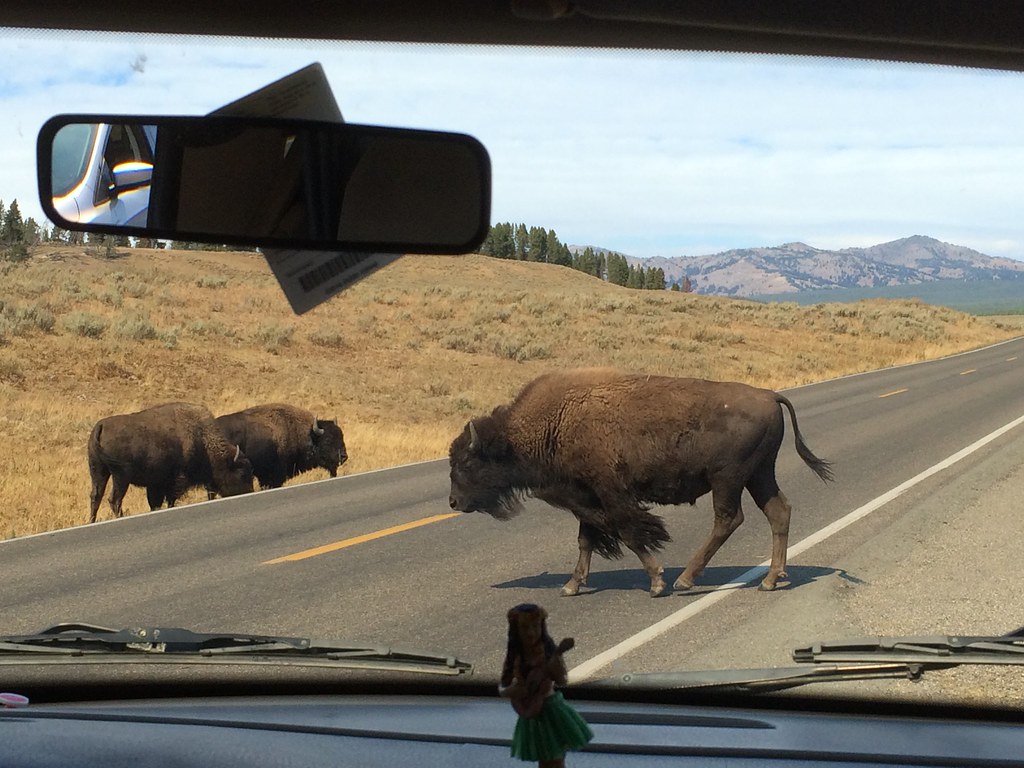