It’s been over four months since we began our roadtrip in Alaska and after 8500 miles we finally made it to the legendary Yellowstone National Park. It’s a place we’ve wanted to visit for years, we’ve seen so many documentaries and dreamed of the day we could see the sights in person. The ranger at the gate welcomed us to the park and received a loud “WAHOOOOOOO!!” from me and an apology from Craig like I was a uncontrollable child. We entered the park at the south entrance and drove north through dense forest and along the shores of the Lewis River where the banks were covered in bright red bushes. 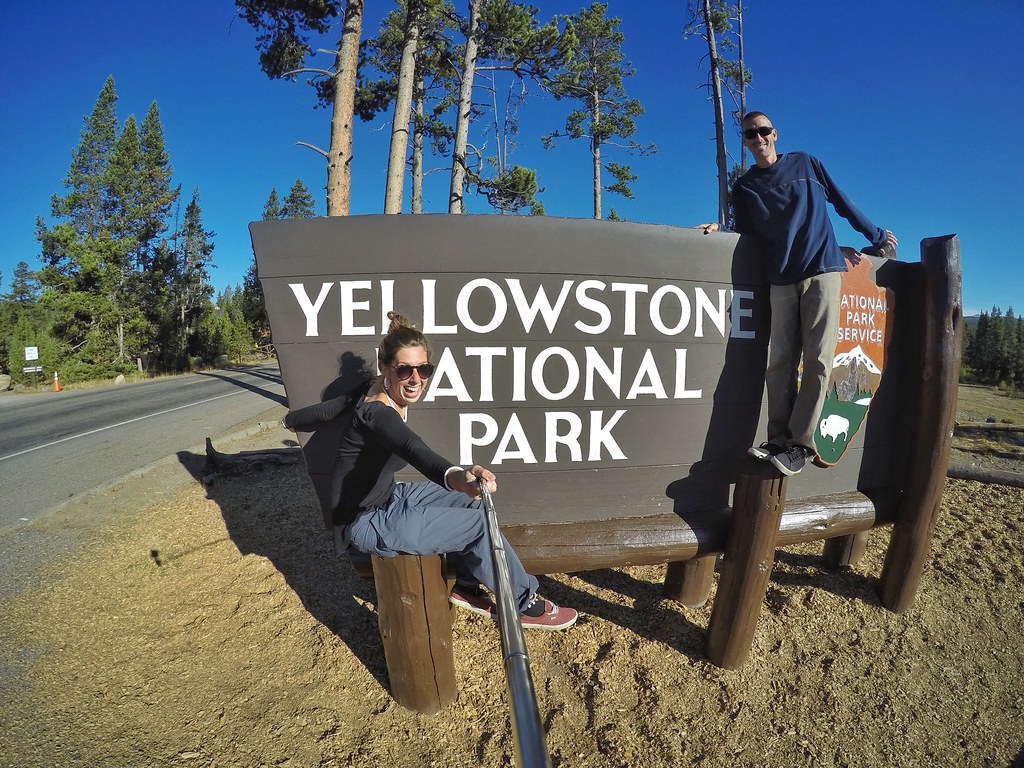 Yellowstone is basically a super volcano; there are about 30 in the world but this is the only one on land and is due an eruption very soon. Scientists say when Yellowstone eventually erupts again it will cover the United States in ash, rivers will turn to a grey muck and agriculture will come to a halt. But until then, Yellowstone remains one of the most magical places in the world and because of its unique scenery it was designated as the first national park in the world. Our first stop was West Thumb where there’s a major geothermal area along the shores of Yellowstone Lake. We were surprised to see such impressive sights so early on in the day. A boardwalk led us in a loop past steaming pools, vents and bubbling pits. There was a mini volcano cone inside the crystal clear lake just offshore which looked incredible. Another cone was on the shoreline with a narrow hole in the top of its beige, hard surface. This one was named Fishing Cone because back in the day they used to say you could stand along an alpine lake, catch a trout, swing the pole around and dip it into the boiling Fishing Cone without even taking it off the line. 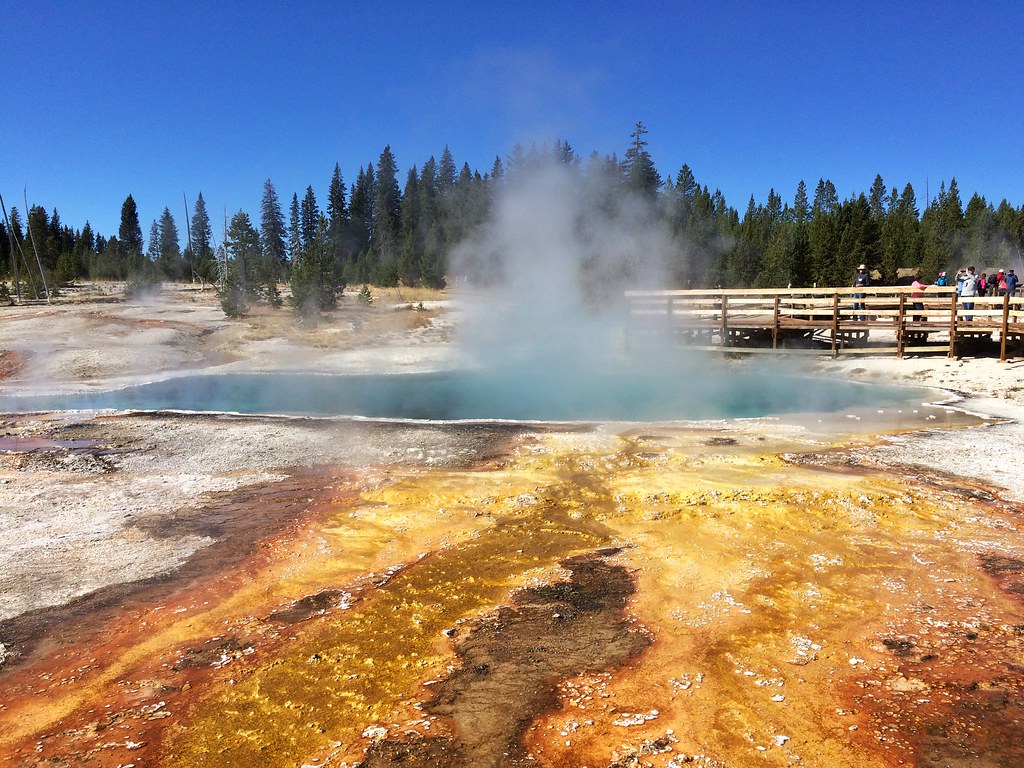 The ground beneath us turned orange where water was running down from the edge of the beautiful Black Pool which wasn’t black in the slightest but a very clear blue colour. Steam billowed from the hot pool and wind would occasionally gust in a way where we could see through the clear water where the inside of the pool dropped down and curved with walls like a cave. 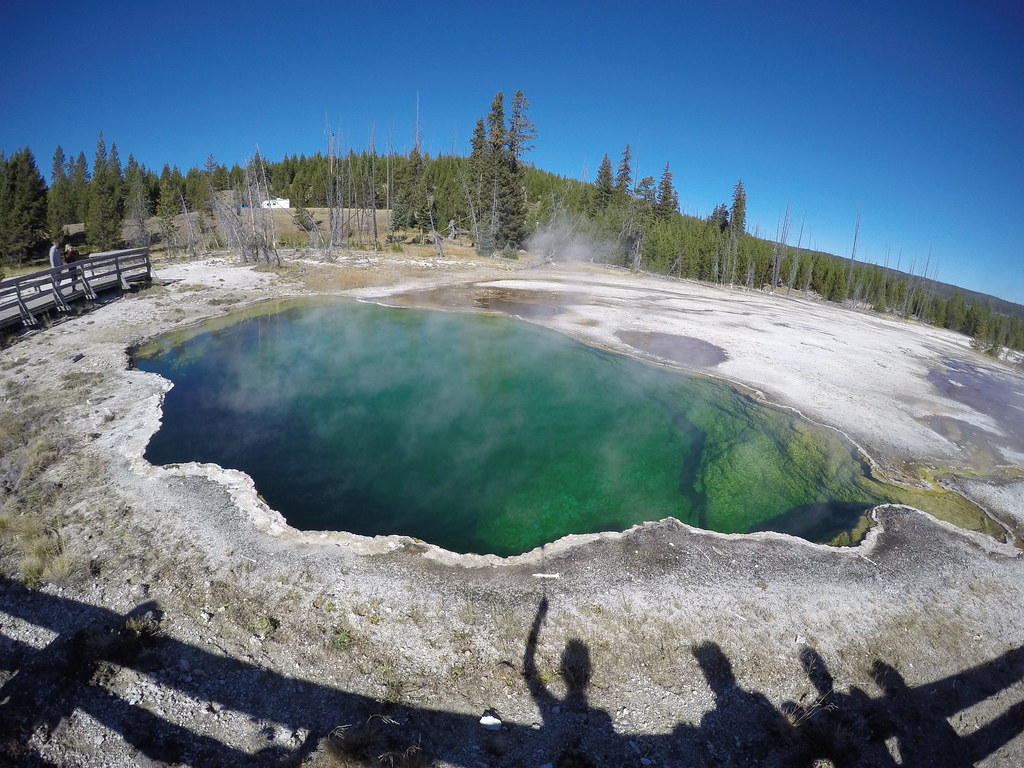 We headed north-east through the park and stopped at the humongous carpark for Old Faithful, the parks most famous volcanic feature. Old faithful is a geyser who has gotten her name because she may not be the highest or most regular erupting geyser but she never disappoints and erupts roughly every 90 minutes. Seating filled up around the geyser so we picked a front row seat on the floor. Old faithful was already steaming but we had to wait about 20 minutes for the excitement to begin. A big Raven swooped over the crowd and scared the old ladies next to me. The bird landed infront of the crowd and the lady next to me began quietly commentating to her friend as if the bird was the park ranger arriving in style for the show. “Good afternoon ladies and gentleman…” the two ladies would snigger together…”if you look behind me you’ll see Old Faithful preparing for the eruption” the Raven looked around as if he was engaging the whole crowd and then I join in with the giggling oldies. The crowd grew as Old Faithful began doing false alarms and spraying water a few feet high. A Russian couple stood behind us and I swear the man was purposely trying to piss us off. He gradually shuffled forward and forward until his feet were touching our lower backs. I looked up to find a huge belly above my head and a camera raised above it. I went to get my camera out the bag but he totally blocked my space so evidently he got elbowed in the leg by me, I looked up expecting him to suddenly realise he was intruding on our personal face and he peered down at me, just eyes visible above the beer belly, stared at me and then looked away!! He didn’t even move back!!! Anyway, Old Faithful distracted me as she kicked into a full eruption and water began spewing up maybe 20ft or 30ft in the air and it rapidly turned into a wall of steam. It was cool, but we have seen geysers before so it wasn’t exactly a wow factor for us. 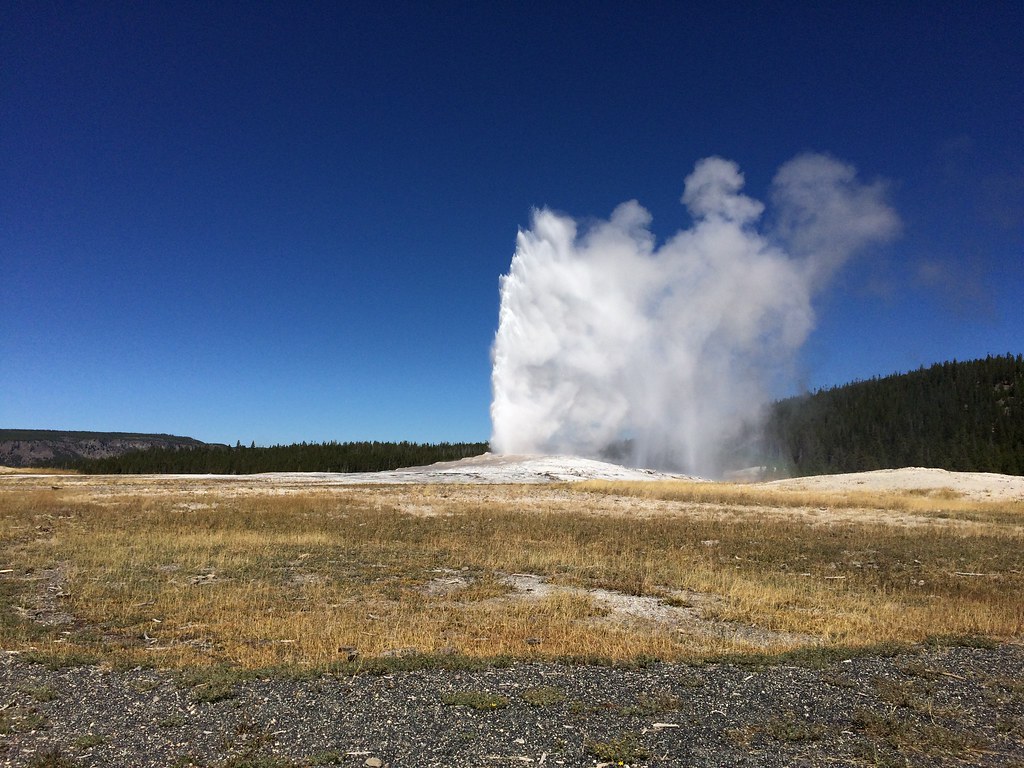 Once the Russian man removed his feet from below our butts we were free to move and decided to walk to a couple other geysers. Craig spotted a Bison and I scanned the area but couldn’t spot it “He’s right there Lauren!!” Oooh….he was just 50 meters ahead of us, i’d been searching the hills! We took some photos of him and he gradually moved closer to the boardwalk. A group of people formed to take pictures and the bison just grazed and scratched his head in bushes. He was now only 5 meters from the boardwalk so Craig and I hastily backed away. We watched on as the Bison approached the boardwalk, and the group of people still didn’t back away. One old man set a fabulous example by standing right in the Bisons way. The beast began snorting and huffing at the man who just continued snapping photos. The Bison suddenly jumped up onto the wooden boardwalk and a squealing old lady finally budged out of its way and the man remained standing like a statue. Luckily the Bison lived up to its gentle giant image and kept going across the boardwalk and to new pastures, but it wouldn’t of taken much for him to charge that man or anyone else in the crowd. 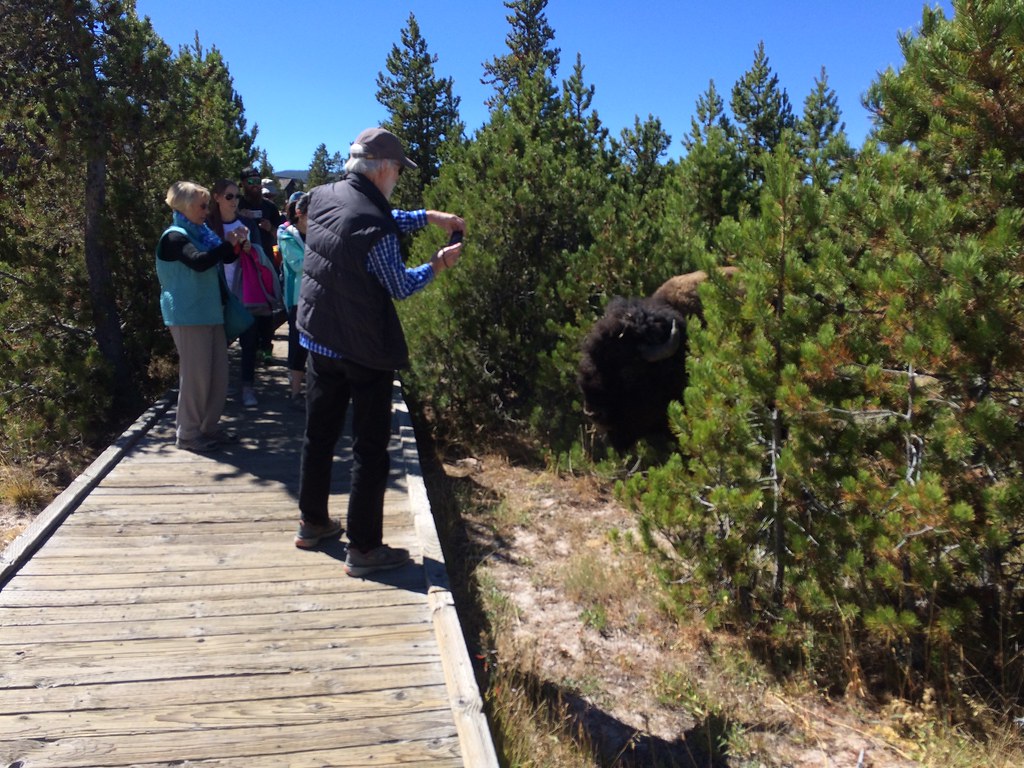 The walk offered lots of stunning sights; pools of every colour, shape and size. We had a few options to turn back but as every pool was different we continued to explore and loved every minute of it. Beauty pool had orange edges and a deep emerald inner colour. The colours of Yellowstone’s thermal pools are due to ‘heat loving microorganisms’ which are different colour depending on the temperature. The orange edges suggested temperatures around 27 degrees Celsius and the blue areas where fewer microorganisms thrive indicate temperatures close to boiling. 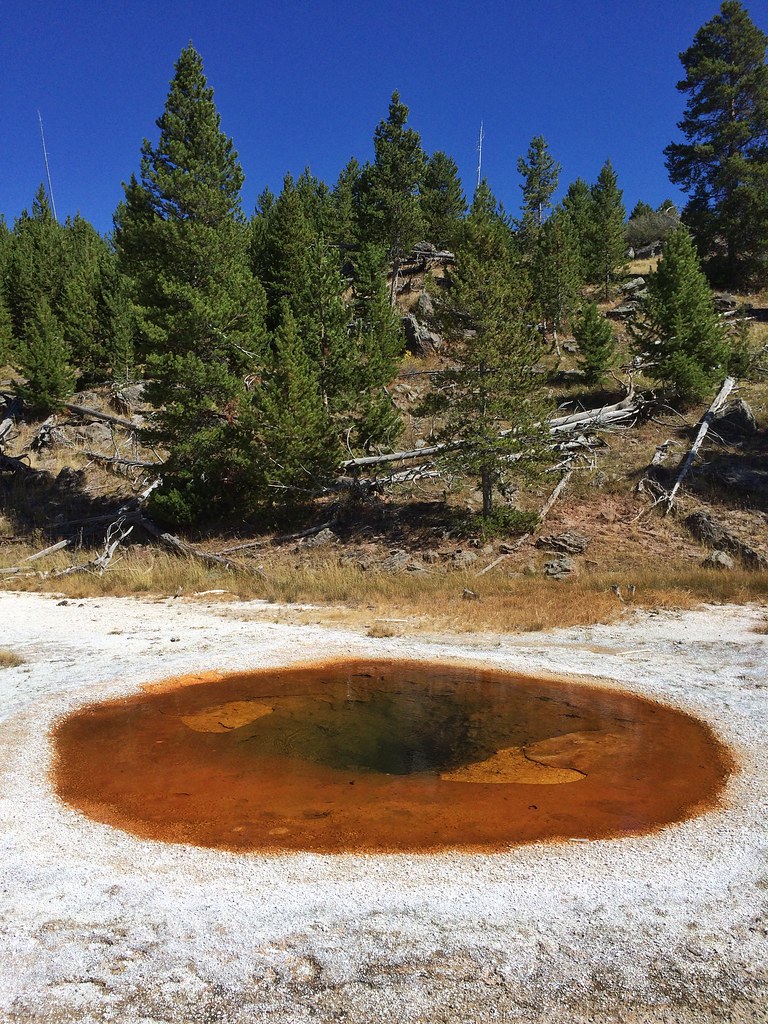 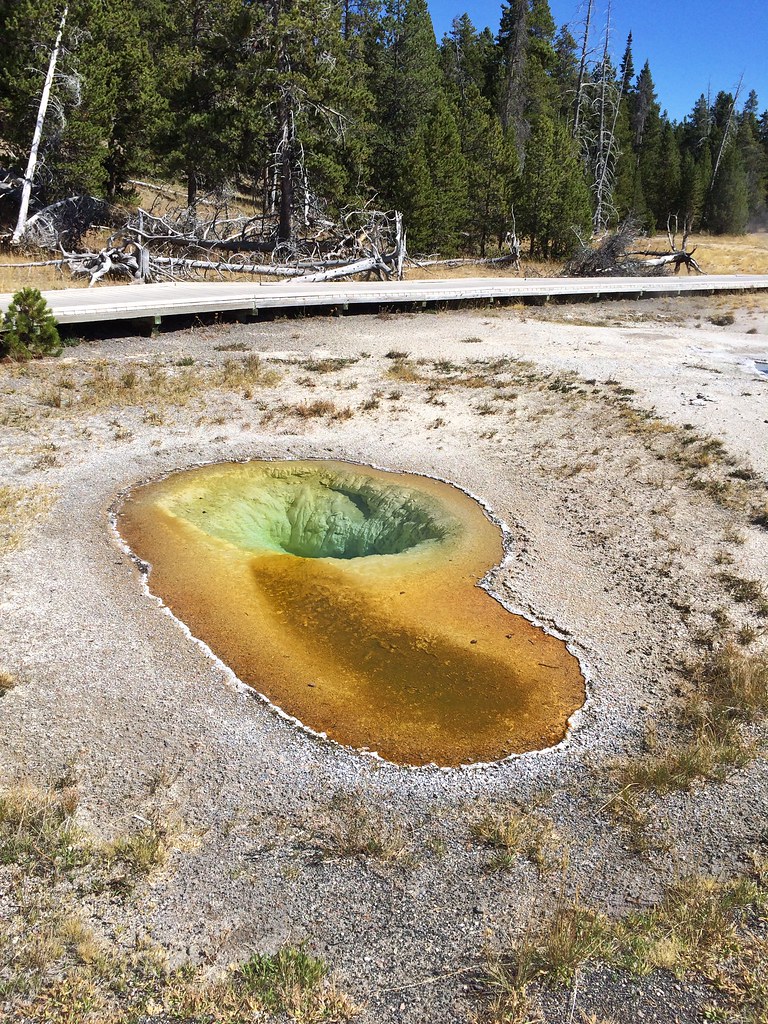 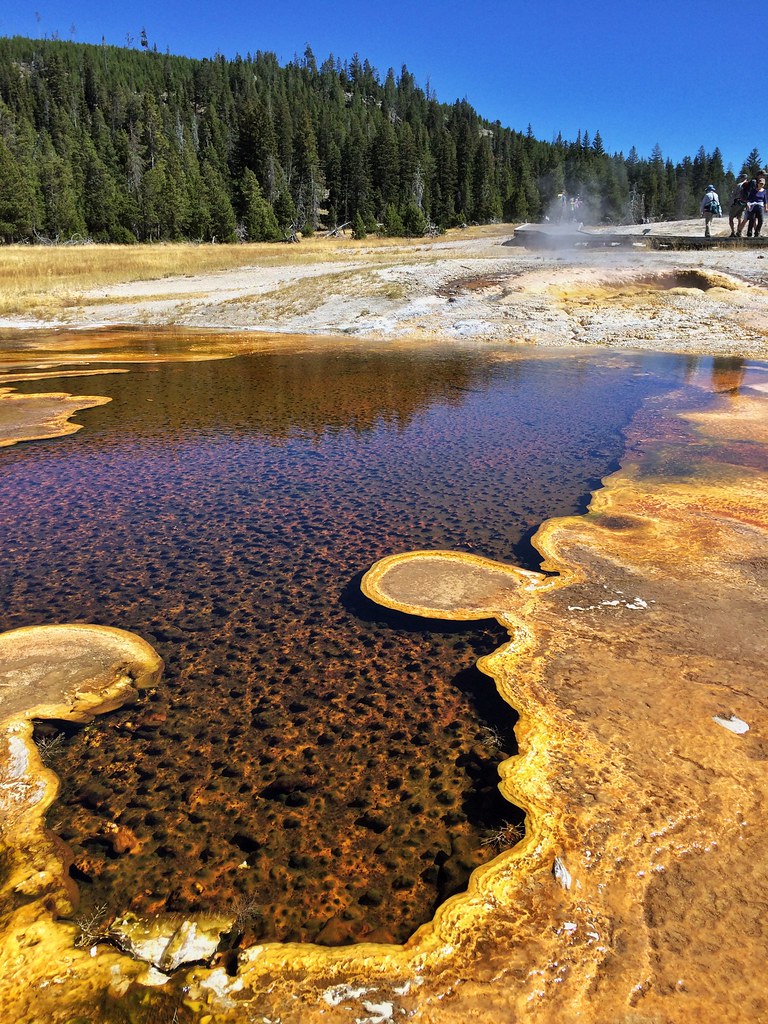 Small geysers erupted regularly out of broken cones where they’d previously exploded so violently in the past that they blew themselves apart. We saw a coyote across the river who looked like he was on a hunt and ready to pounce and another one on our walk back. It seemed crazy to see them where so many visitors were. 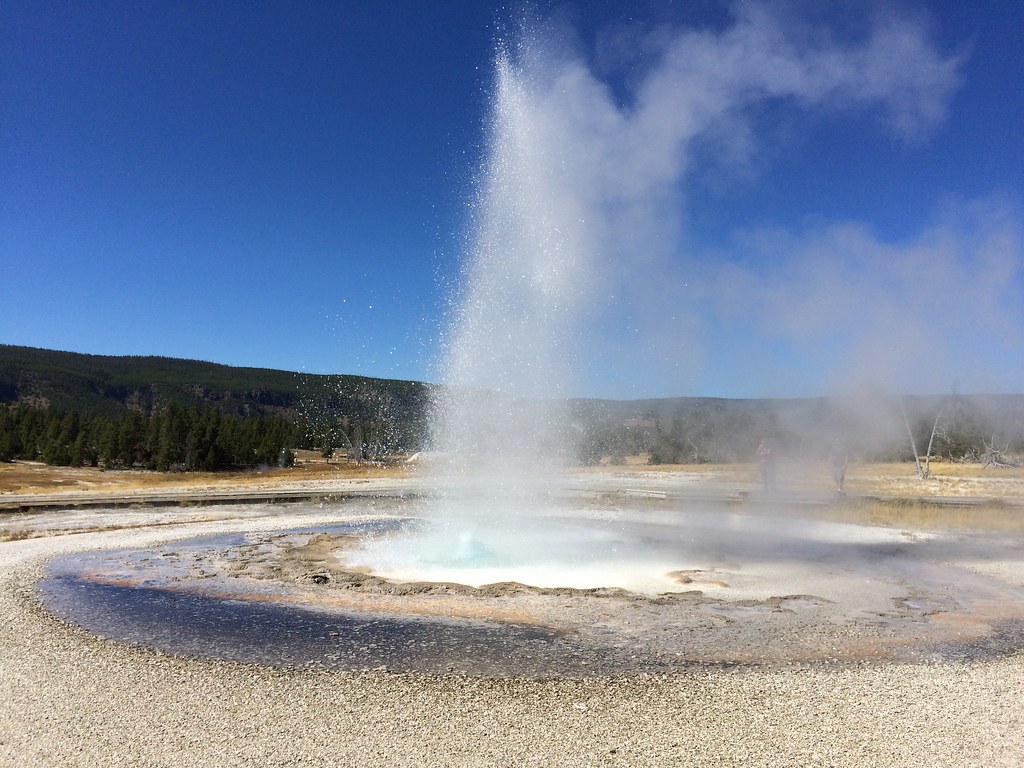 On the way back we noticed a sign saying Daisy Geyser was due to erupt in the next 20 minutes so we took a seat and wondered how on time she’d be. A guy next to me started saying the wind can really effect Daisy and delay her and he seemed to know an awful lot and chatted away and then abruptly turned away from me and blared “this is daisy! DAISY 14.25” into a walkie talkie. I had no idea he worked for the park and was reporting the time of the eruption to predict the next one in a couple hours. I found the geysers less interesting than the colourful pools though, they were just like water-features on steroids. We continued the journey north and had plenty to stop and see along the way. Black Sand and Biscuit basins both had a kaleidoscope of colours in their pools. One of our favourites was sapphire pool which was bright aqua-blue and crystal clear to see the shapes below the surface. The stream flowing to or from the pool (I’m not sure which way it was actually going!!) was a fabulous orange colour and patterns of circles, stripes and curls were created in the water. Fluorescent yellow streams flowed beneath the board walk and geysers blew around us. It was quite a lot to take in! 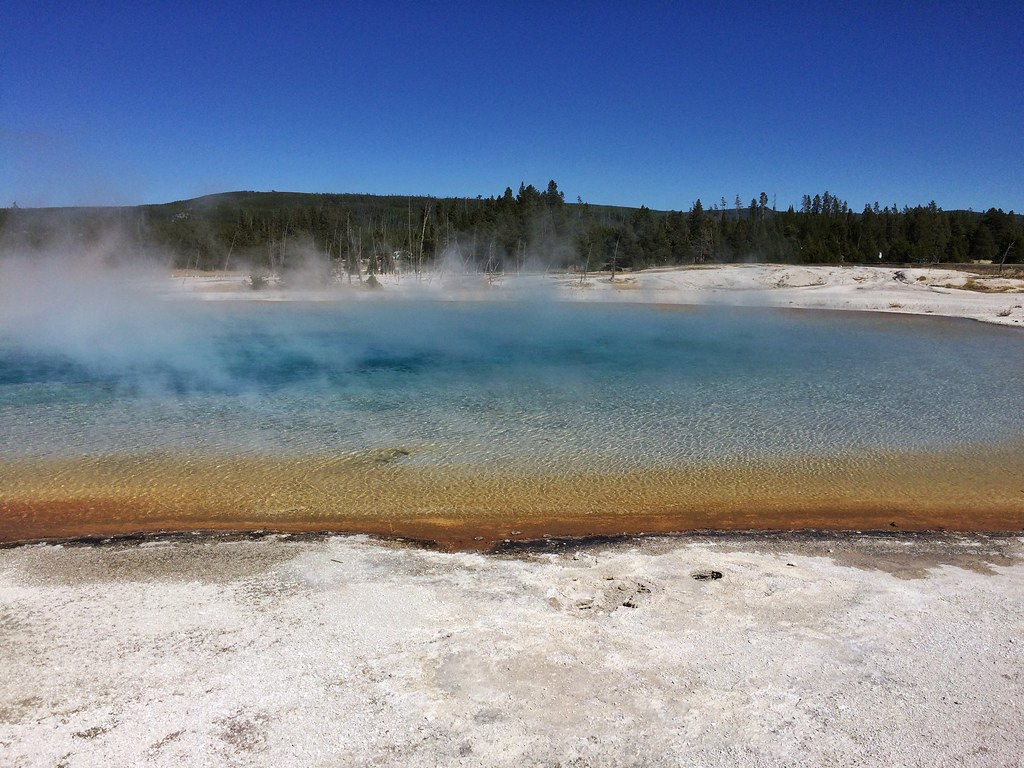 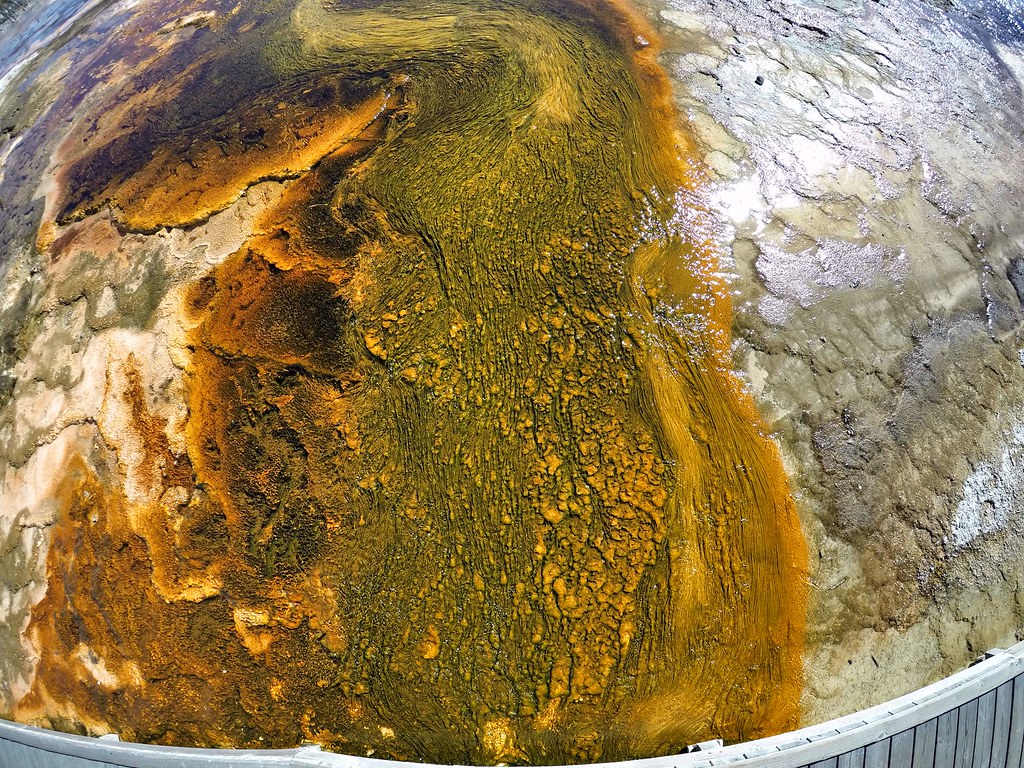 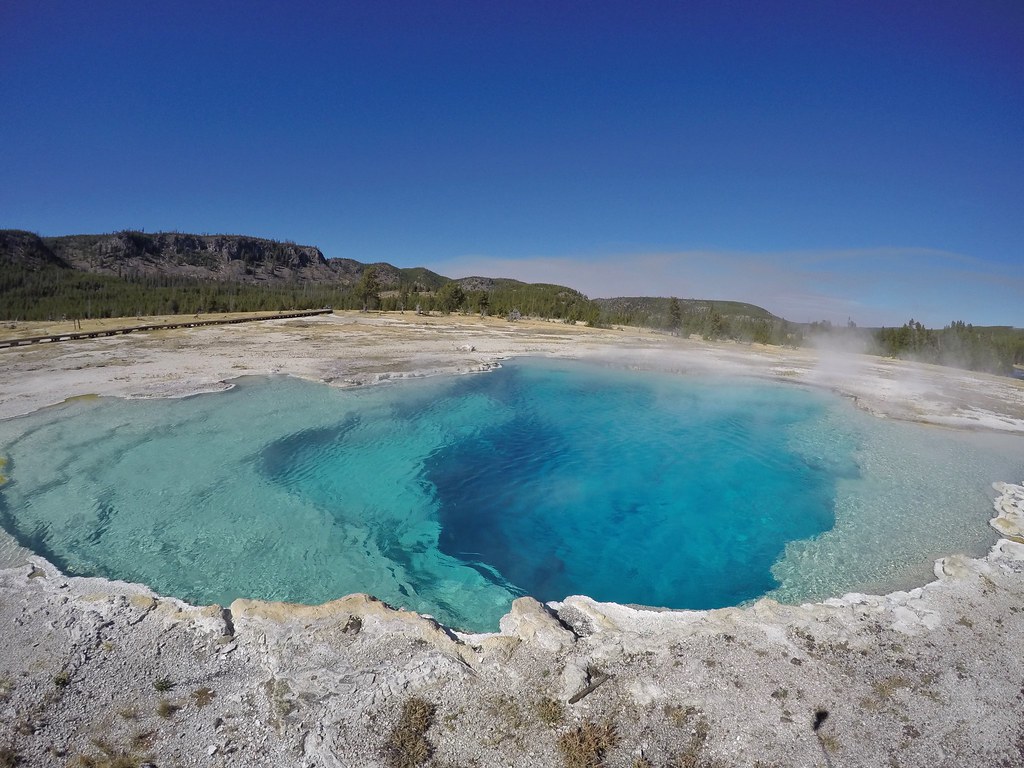 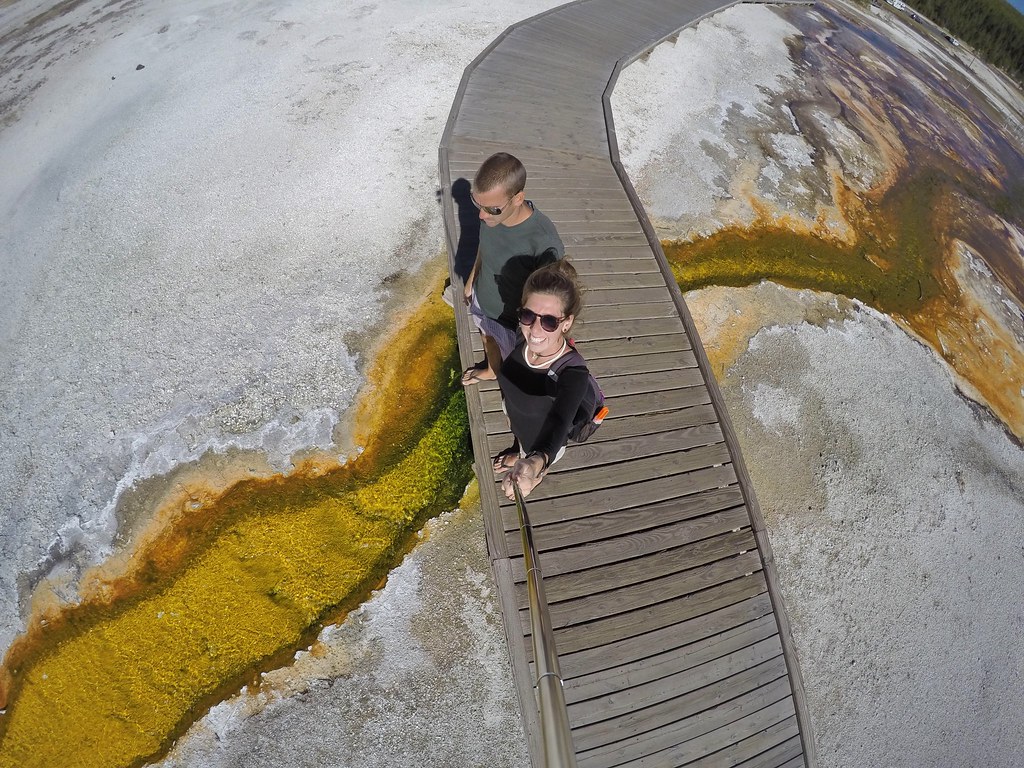 Our next stop was one I was most excited about; Grand Prismatic Spring. The parks most famous one and I believe the largest in the lower 48. We crossed over the Fire Hole river where hot run off water spilt down from the thermal pools above. We passed a massive clear blue pool barely visible beneath the thick steam and then followed the boardwalk aiming for the line of human silhouettes against the steaming backdrop. Grand Prismatic was also hiding below the steam which flew past us so majestically. Wind gusts caused the steam to come towards us where we were treated to a steam bath. We could only see the edges of the pool where orange colours swirled like the edges of a cartoon sun. When the wind changed directions the main pool was revealed showing quite the spectacle where yellow edges blended into green and then blue. Due to the wind lots of tourists had lost their hats which were scattered along the pretty terraces around the main pool. We took a scenic one way road along the Firehole Lake Drive but to be honest the volcanic activity was becoming a little repetitive. One cool sight though was a geyser sat atop some tiered layers in a lake like layered infinity pools. 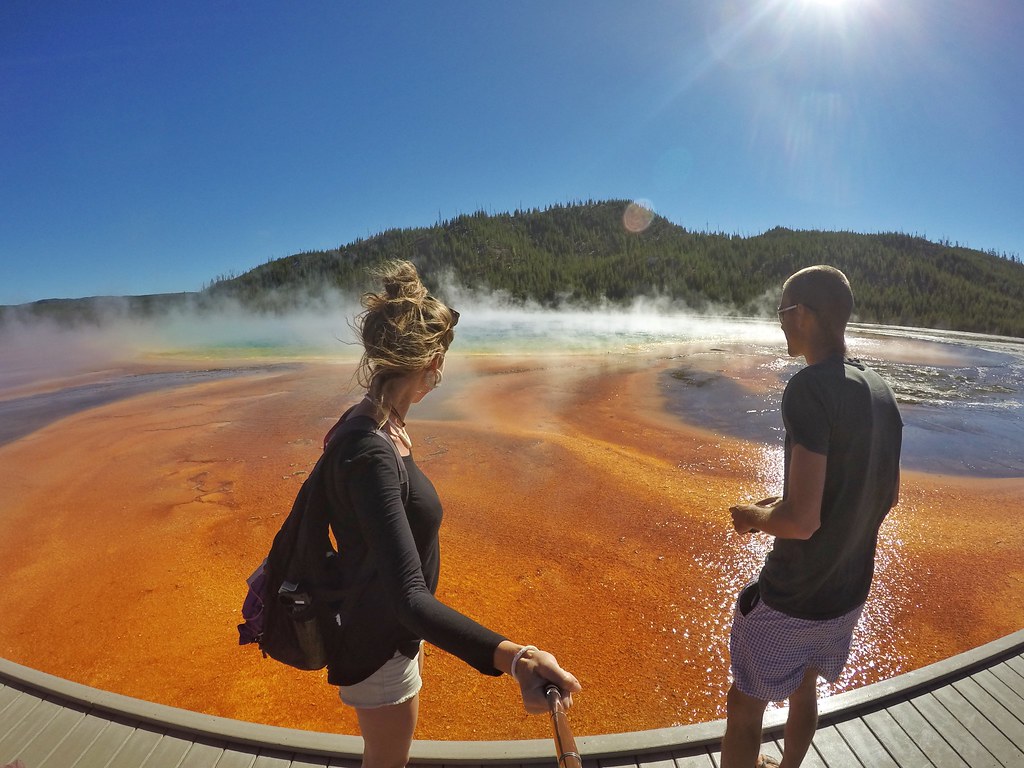 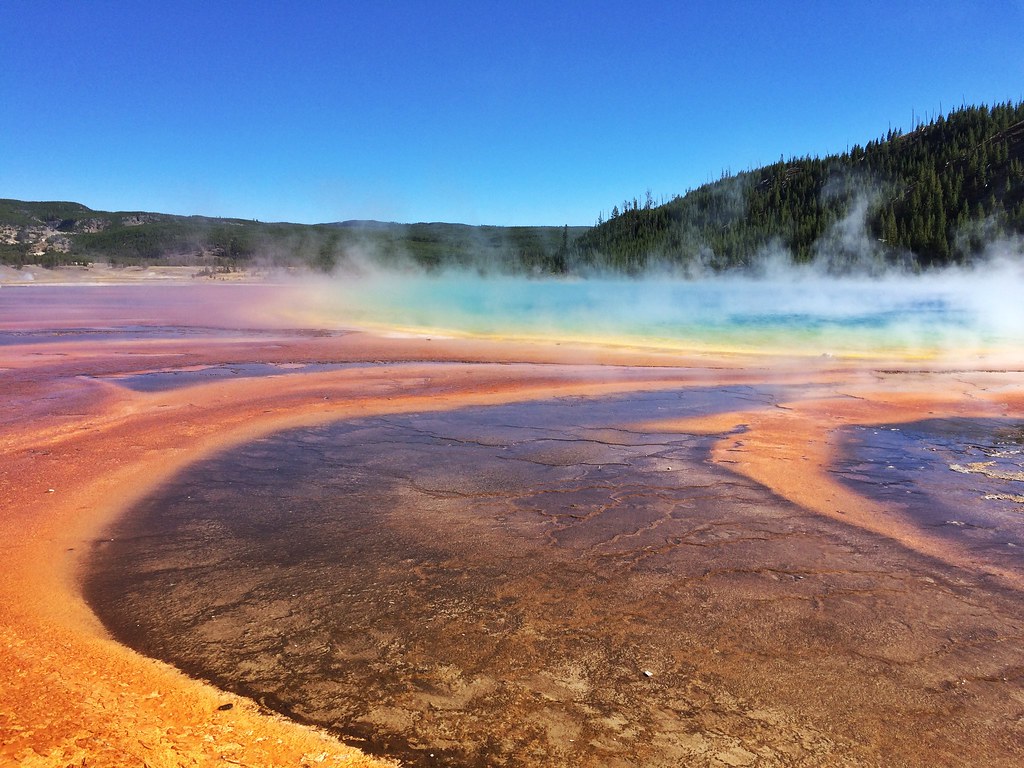 Another one way drive took us along the Firehole Canyon Drive where we started at the bottom of the canyon with the river to our right and walls towering above. We passed a pretty waterfall and then saw a sign saying ‘Firehole River Swimming area’ so we pulled up not expecting to go for a swim as it was already 5pm and the sun had dipped behind the canyon. The idea of an ice cold river sounded horrible but we dipped our toes in and found it was actually not that cold! The thermal activity upstream must heat the river so we enjoyed a lovely swim before leaving the park for the day. We exited at the West Entrance, passing herds of elk and camping in a rest area just outside the park, making sure we got an early night for another day of exploring tomorrow. 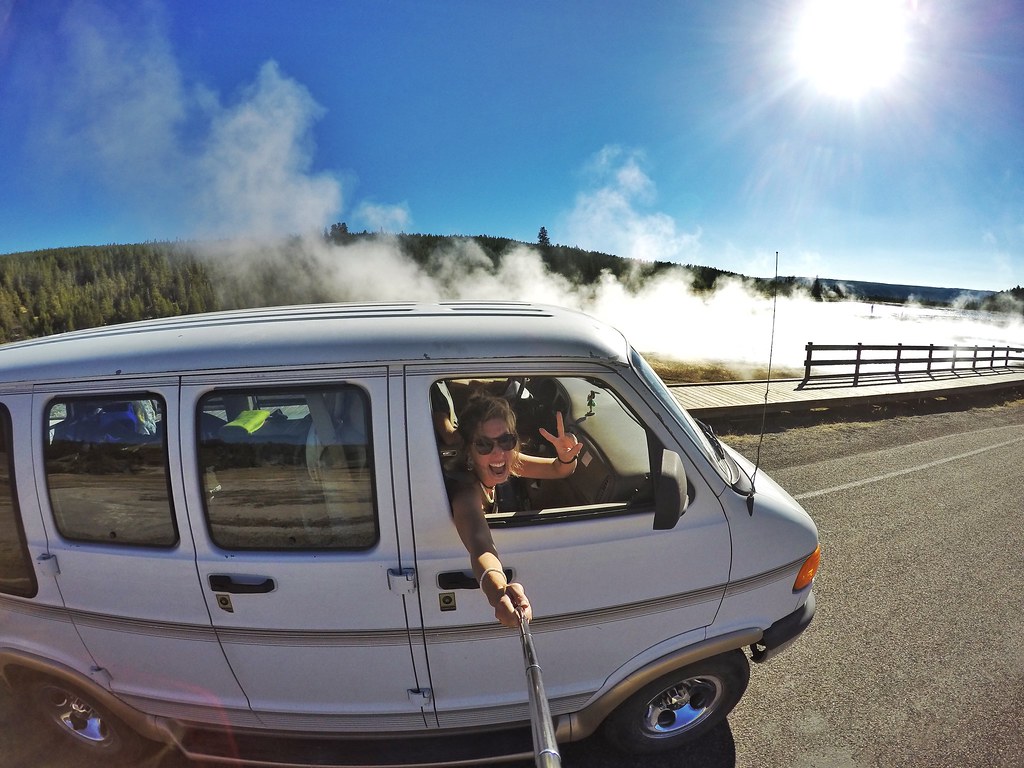 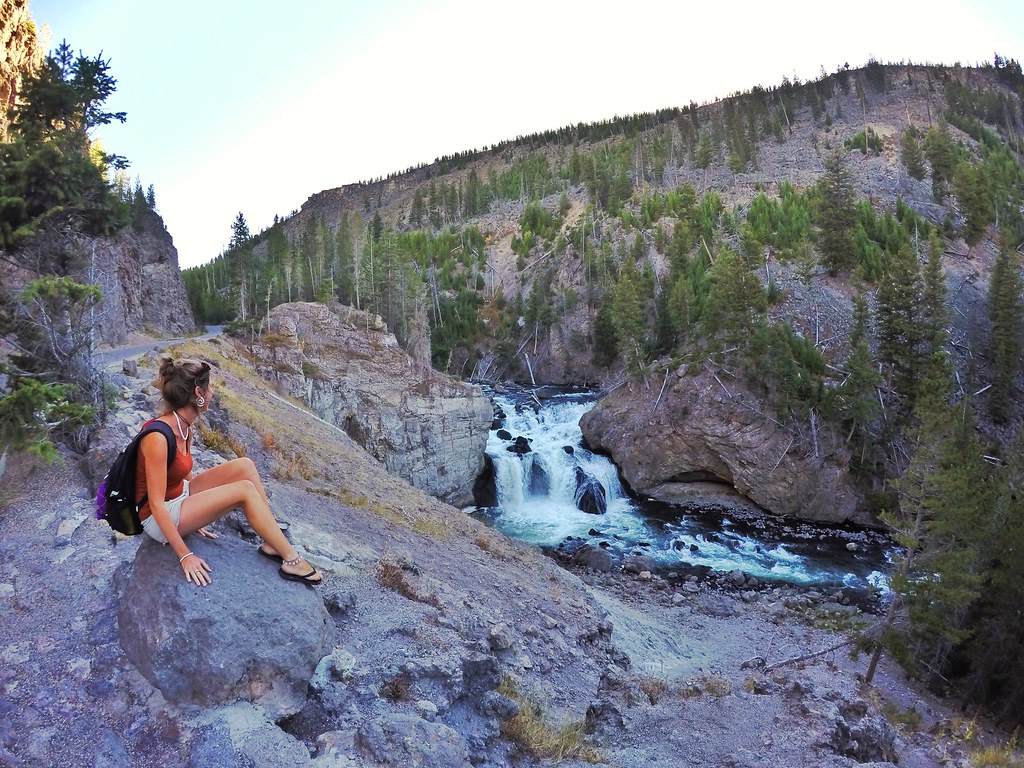 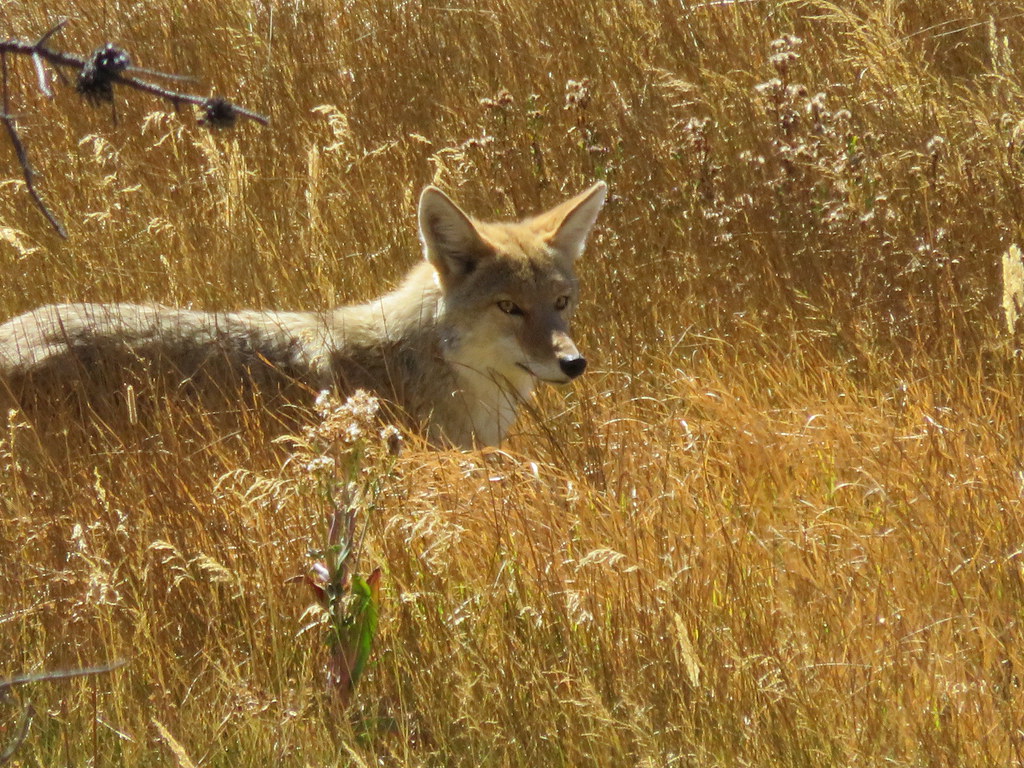