The Tetons treated us to a day full of its best views. The sun touched the peaks first thing and stained them pink once again like a picture out of a brochure. We saw our first herd of bison in the distance and a male Pronghorn Antelope in the field before stopping at the Mormon Barn for the quintessential image of the Tetons with the rustic wooden barn in the foreground. 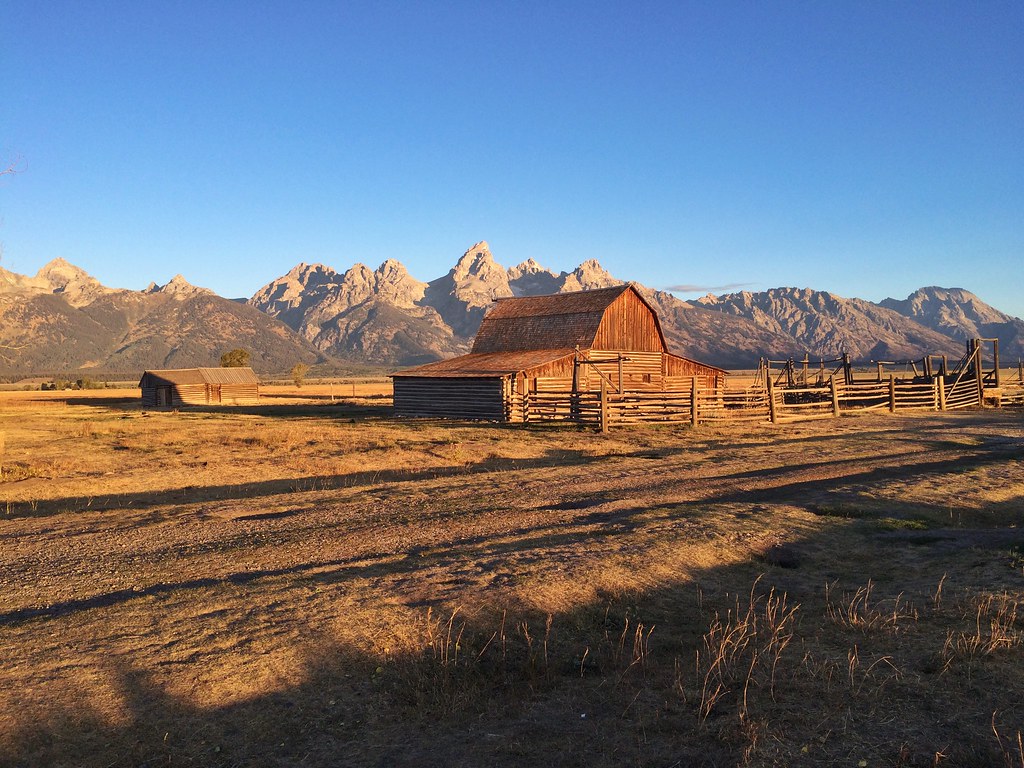 We then headed up the Schwabacher road to view a section of the Snake River in the hope of a reflection of the mountains and boy did we get it. The view was stunning! Beavers helped us out by damming up the area and making tranquil pools which caused double vision for the jagged peaks and bright green and yellow foliage which is on its way to turning autumnal. We then headed north passing more distant herds of bison and some elk. 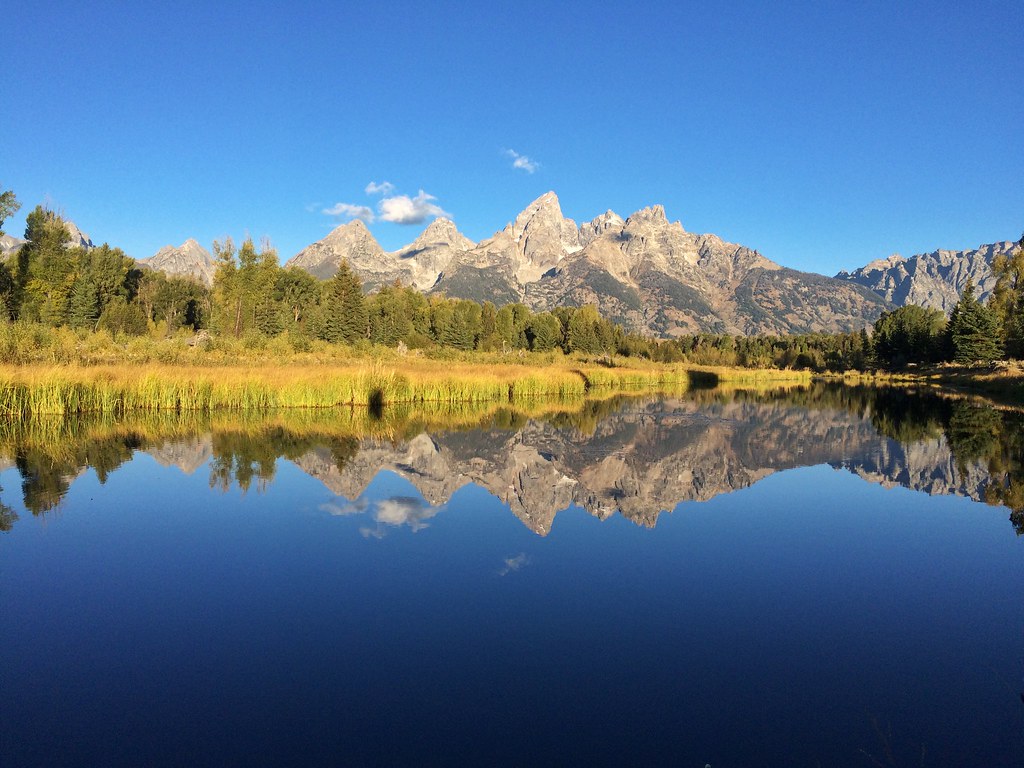 We ended up at Colter Bay and took a stroll around the lake shore and two lily-pad filled ponds. It was a pleasant walk but nothing riveting. The view was best from Colter Bay itself where the gravelly land wiggled in and out of the blue water. Oh and Craig nearly stepped on a snake! It was a beautiful one with a bright yellow line down each side and red dots. Judging by the bright colourings I’d presume it was poisonous but who knows. It amazes me how snakes glide so effortlessly through rough terrain. If you’ve ever held a snake you’d know they’re pretty smooth, so how aren’t their body’s covered in grazes and roughed up? 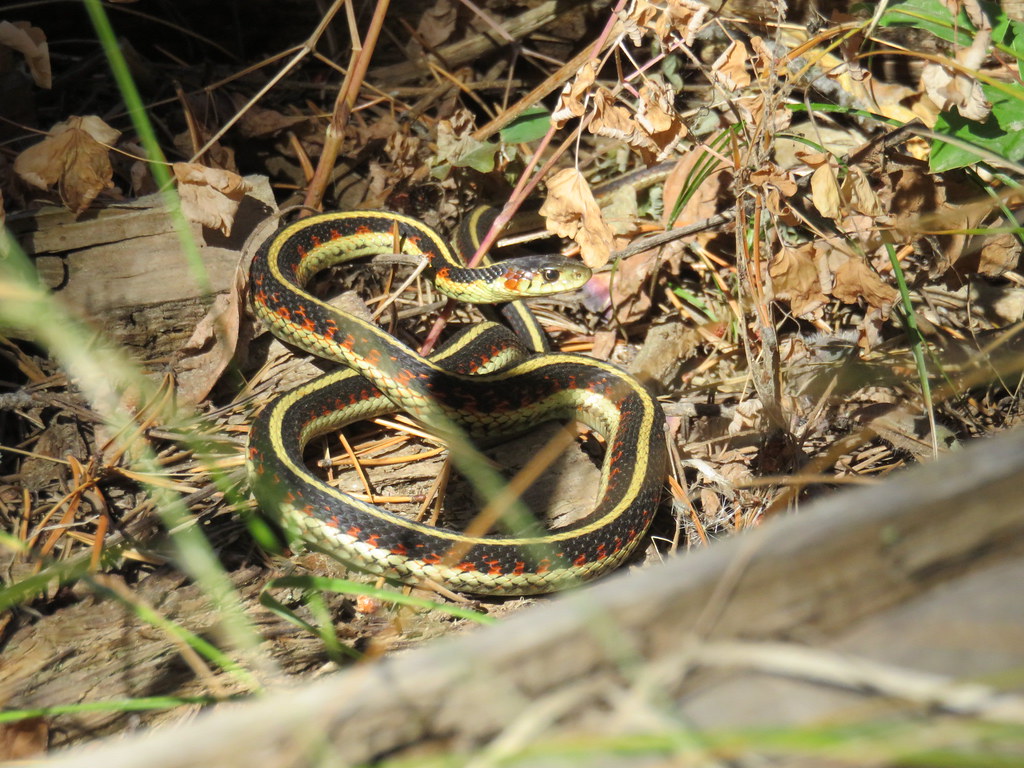 We considered boating around Colter Bay but it’s part of Jackson Lake which is humongous and any puff of wind could send us into the open lake where our whistle would fall on deaf ears and our lifejackets would ensure our bodies eventually got blown back to shore for a wolf or grizzly to devour us. So instead we took Roland to Oxbow Bend, where the Snake River twists and turns creating safe, lake-like areas. It was more of a wildlife boating trip as appose to the crystal clear glacial lakes and close peaks we’re used to. So we went over dark water full of creepy underwater trees and pink weeds that looked like coral reef. We saw lots of swans and a huge heron that stood over a meter tall on the shore line. The wing span was even bigger as it flew above us. It wasn’t quite the wildlife extravaganza we’d hoped for but we did see a lone female elk drinking water from the river before spotting us and vanishing in the woods. 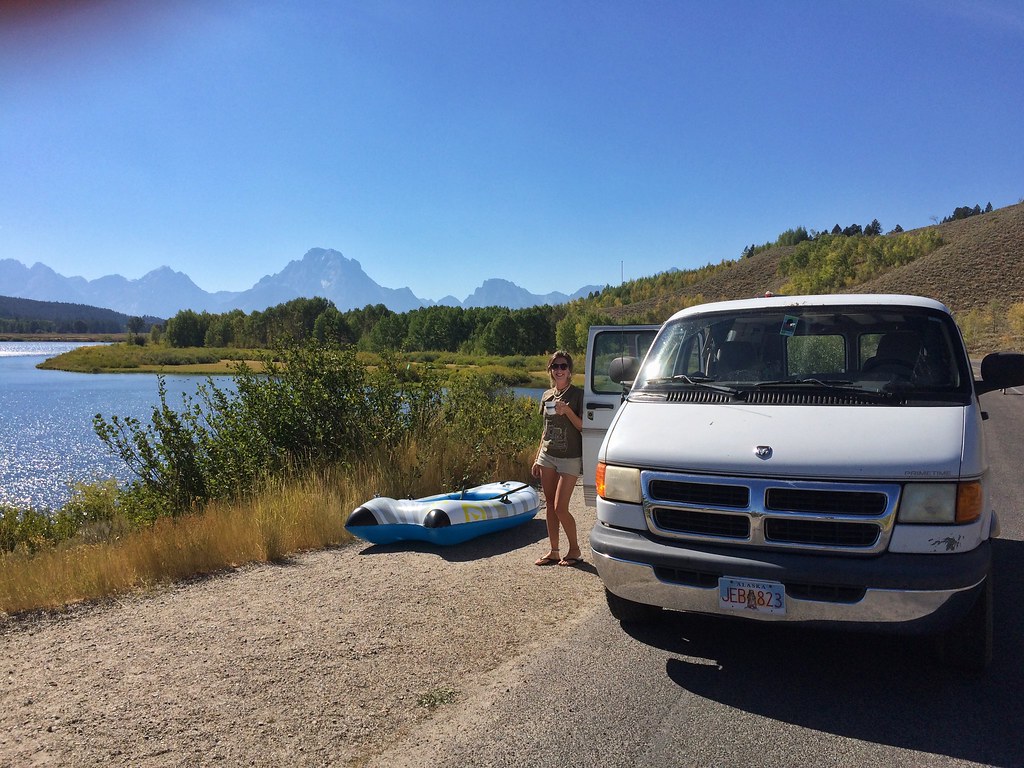 For our last night in the Grand Tetons we exited the park via a different road and had dinner in a pullout overlooking a pond and meadow. Three otters were swimming in the algae covered pond and they created a network of veins and lines through the algae surface. At last a bull elk came along to join the party. He had a great big rack and ventured in and out of the woods and meadow. A noisy old car pulled up behind us and we heard a loud bugle noise come from them. The man was using one of the hunting devices to make a noise and act like a competing male for a fight. Luckily the bull ignored the fake bugle and went in search of a group of females to battle for.

The mountains were a long string of silhouetted peaks and we woke to the same view but much colder. It must’ve been our coldest night yet and as I went to take the fleece blanket off and fold it up I realised it was stuck to the window. It was totally frozen onto the window and all the condensation inside the van had frozen inside. We’ve experienced this on other roadtrips but it was a bit of a shock and felt like autumn had come early. 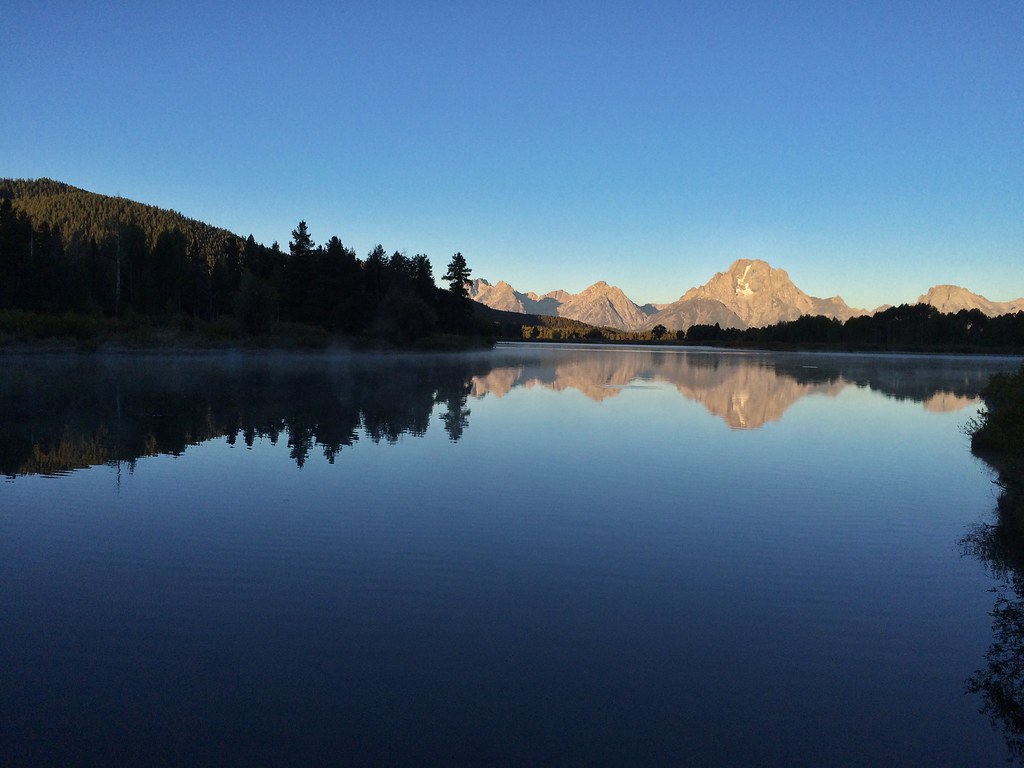 We passed a herd of elk being corralled in a very disorganised manner by the male in charge. They just went around in circles not sure where to go. Oxbow Bend had much calmer waters at such an early hour so we saw the mountains reflected there and were surprised to see Colter Bay also very calm. In fact i’d say the reflection there was one of the prettiest as the mountains seemed so much closer. 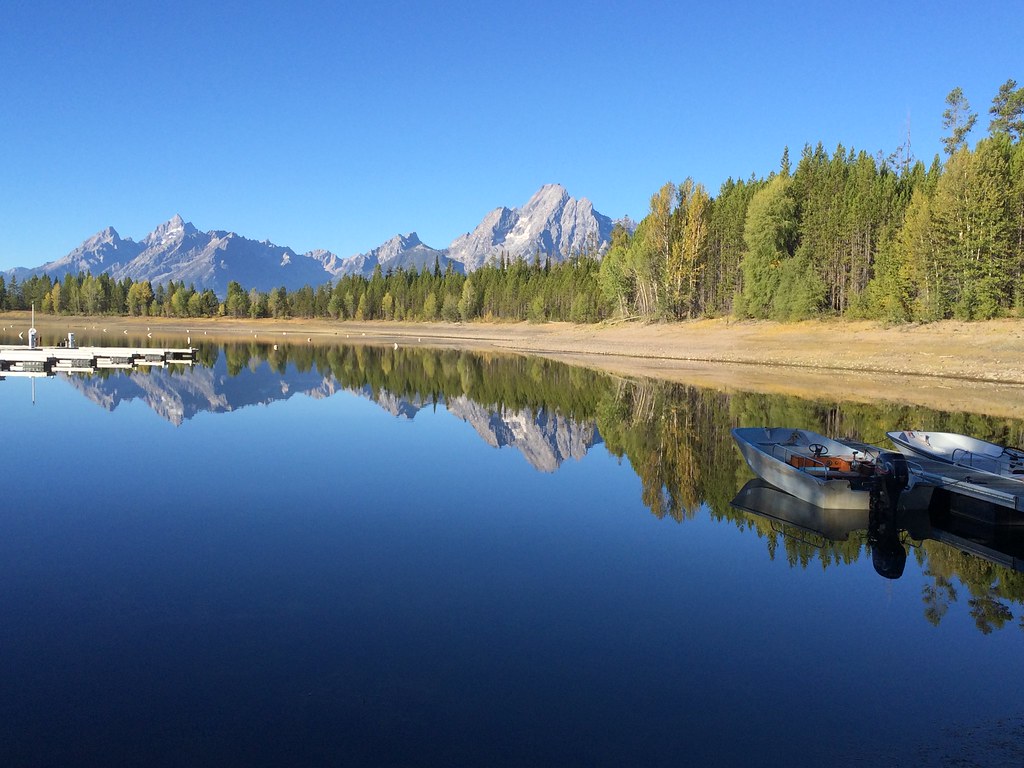 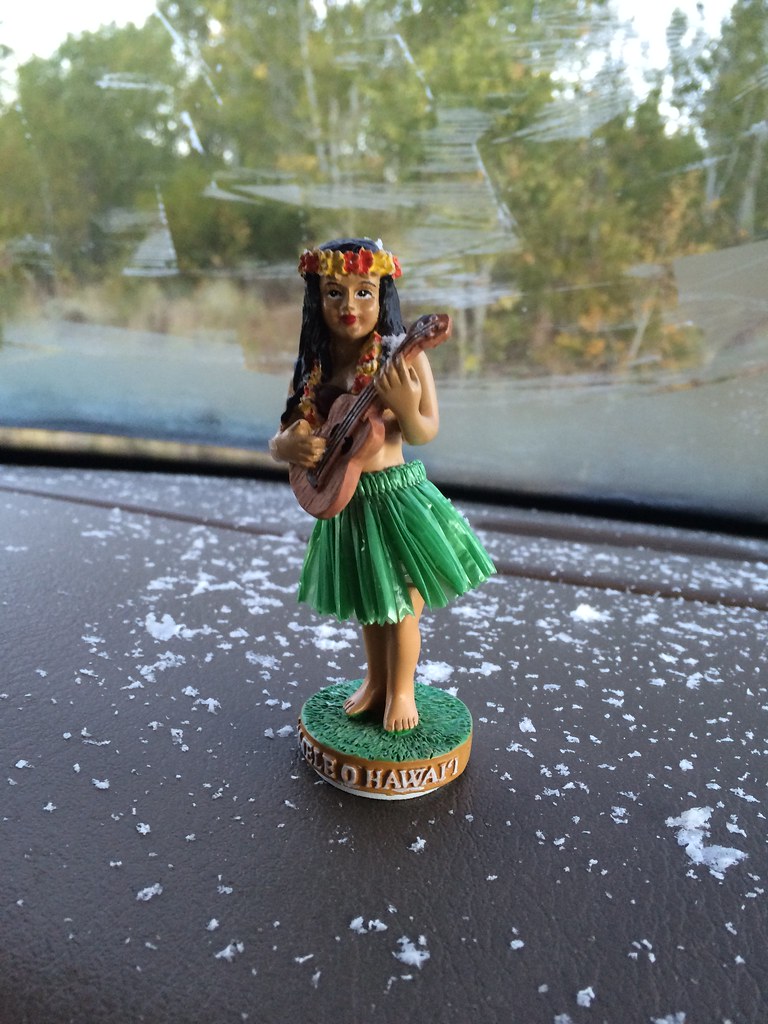 We were ready to leave the Tetons and head north to Yellowstone. We’d checked before hand that the road was open as last week it was closed for a while due to wildfires. Sadly we got an extremely rude ranger who replied so bluntly…”it’s burnt, nothing more to burn, only stumps left” so I replied “ok so just to clarify is there not even a slim chance that the road could re-close?” And we got the same answer “nothing to burn, no fire” which is odd as the last ranger said it was still burning. Anyway…30 hours after we entered Yellowstone guess what happened. NOTHING MORE TO BURN AY?! The road closed again. Thank god we made it in in time. 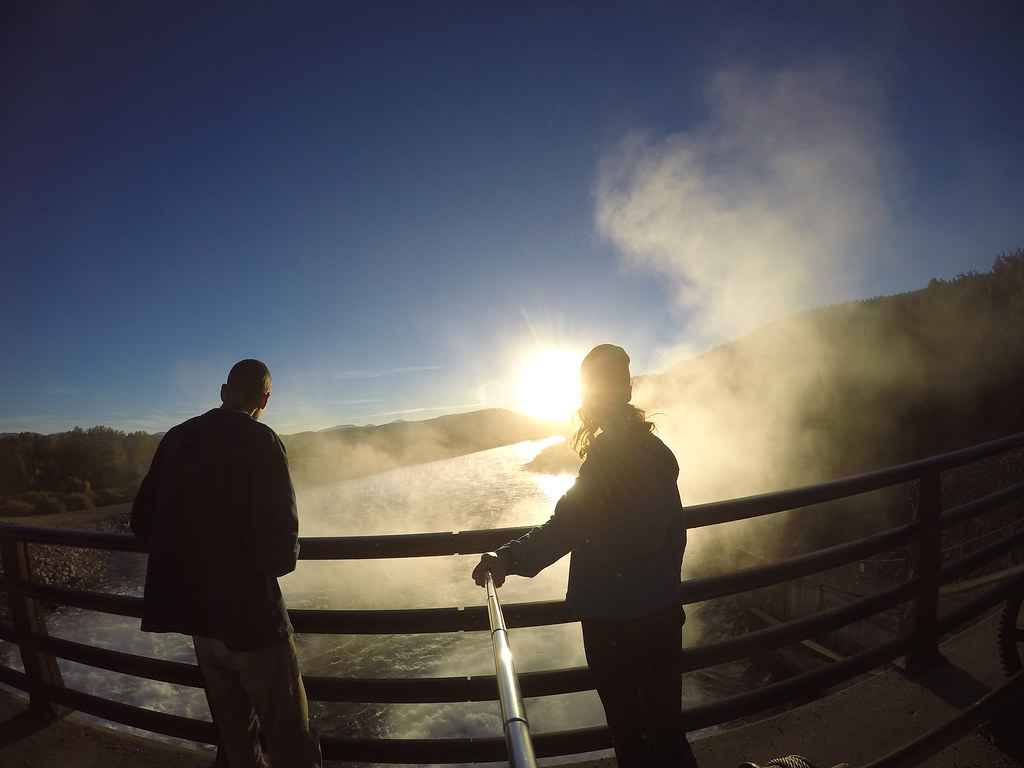 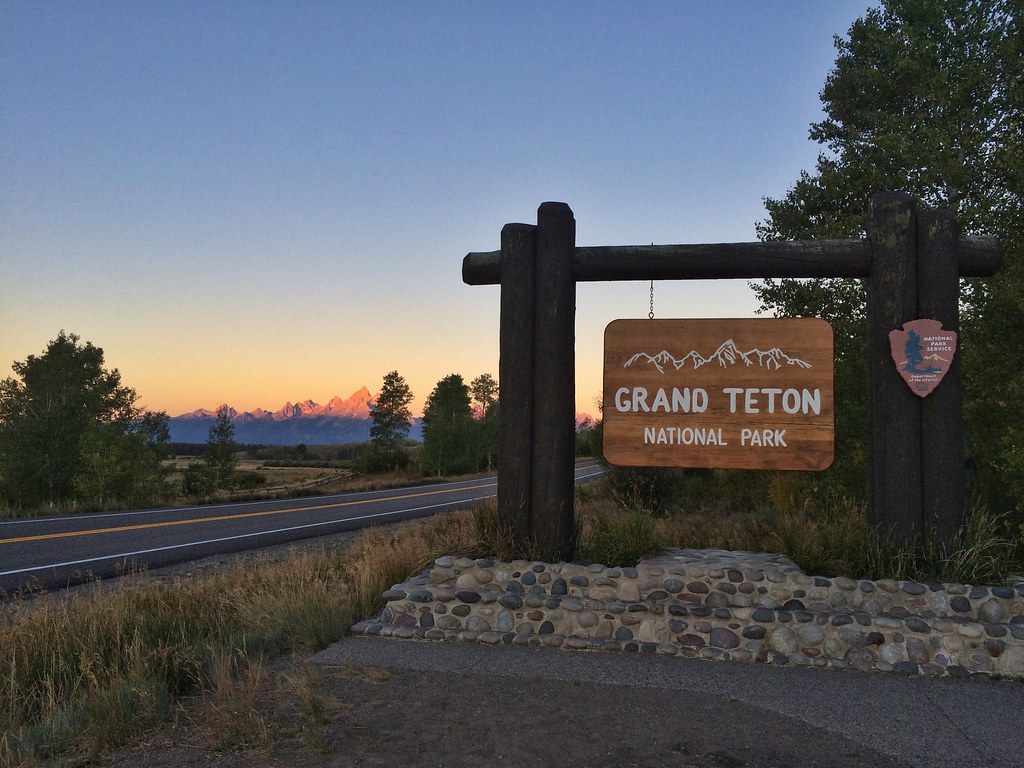