We find it really hard waking up early, especially when it’s freezing cold in our van, but whenever we’re in a National Park we dust off the alarm clock and make the most of each day. So at 6.45am my alarm began making the irritating noise and I snoozed a few times. I lifted up the blind and the mountains were dark, next snooze and I lifted up the blinds to see the tips of the peaks turning pink, that’s better than any alarm clock! We were out in a flash, engine running and on the road by 7am to see the sun hit all of the spiky mountains. 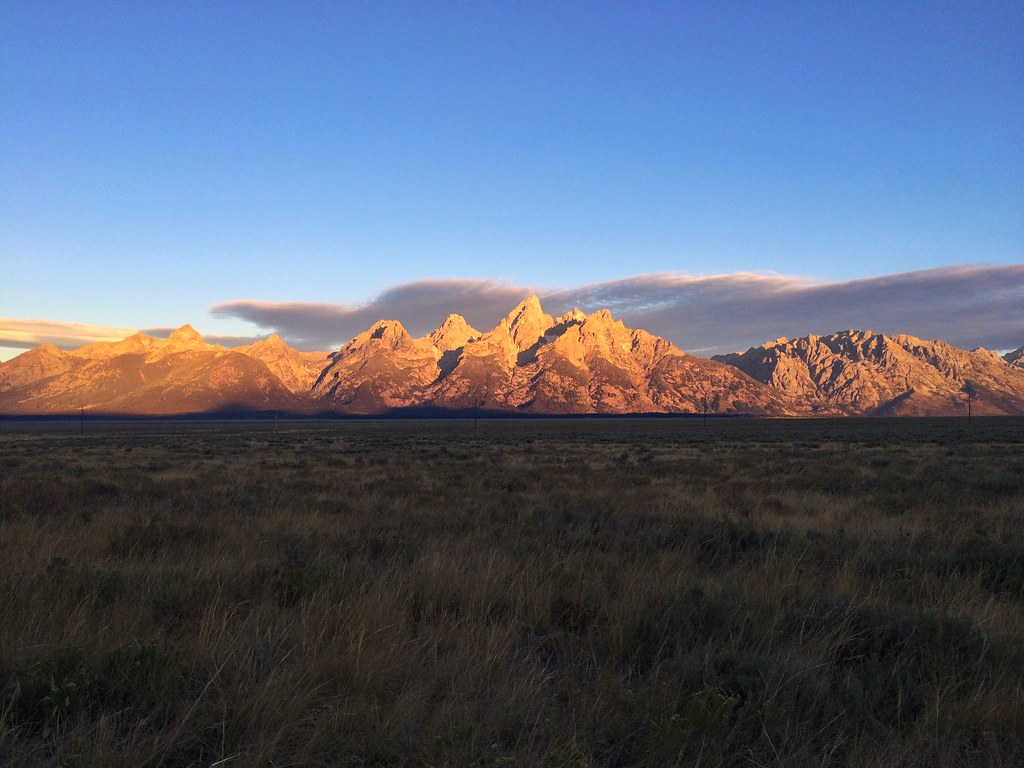 Today was to be a hiking day and we began with the Bradley and Taggart Lake loop. It’s one of the parks most popular hikes as its easy, short and stunning. The centre of the Teton range and the highest peaks loomed ahead of us for the whole hike. Both lakes were wild and windy with clear water, forested edges and giant grey peaks as backdrops. Craig decided to scan his camera over the far shore of Taggart Lake and managed to spot a bull moose!! It was pretty exciting as we’ve never seen a male moose with a full rack like that. 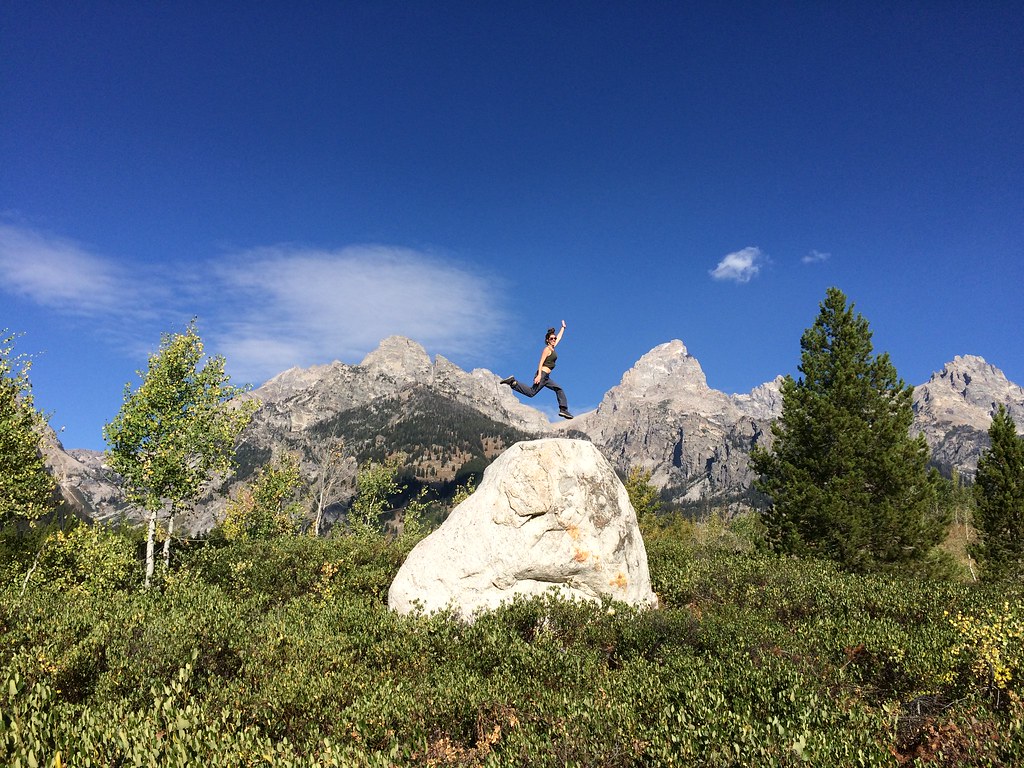 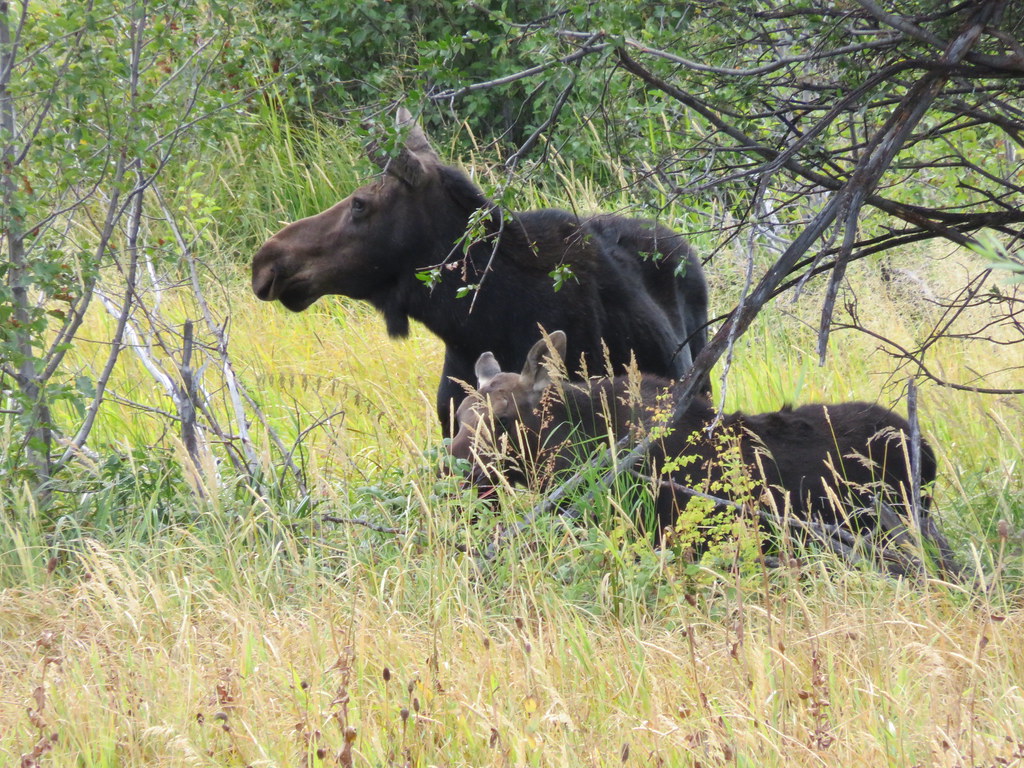 After a lazy lunch we did another hike to Phelp Lake. It was a simple 3 mile loop which was again very easy on the legs. Chipmunks rustled in bushes along the trail and darted past us and up trees. The lake has a popular rock you can jump into the water from but the weather was far too windy to consider a dip so we turned back. Phelp Lake wasn’t half as pretty as the two lakes from earlier in my opinion as it lacked the typical Teton looking peaks in the background. More chipmunks were rustling on the way back and Craig made a comment about how annoying it is that they make such a noise…such a noise ay…I looked right and a bear looked right at me. It must’ve been only 3 to 4 meters from me and I had a very delayed reaction telling Craig. Luckily the bear ran away while I stood in shock, I always act so professionally in my head when I think about how I’ll act with a bear encounter and then it happens and shit fills my pants. The bear stopped running and turned to look at us, at which point we said hello to the lovely little bear and raised our arms to look like Giants while backing away. It worked as the bear ran off again. We’d been making lots of noise before hand chatting away but I guess the bear could only hear the river gushing. Craig had the bear spray ready and we carefully continued the opposite way to the bear, only to find that the trail just led to a bench and viewpoint over the river so we had to turn back and head towards the bear. We made lots of noise and clapped out hands but our main worry was that it was a really small bear, we think a grizzly as it had a little hump and was brown but it’s tall ears gave it a black bear look…so the jury’s out on that one. But it looked small enough that mama bear might be around and we didn’t want to meet her and be like “Oh hey! We found your cub, you should really keep an eye on that little rascal!”. As we scanned the area and made slow progress I spotted the bear in the river. We had a look through the woods and still no mum in sight. The little bear was on a sort of rocky bridge across the river eating grass and algae. We managed to take some photos from a safe distance and admire the bear. Occasionally it would sit down to eat which was just adorable. Some people across the far side of the river had also spotted the bear and were taking photos and then we saw a couple standing by the bench we’d walked to before taking photos just 3 meters from the bear. They’d snuck up on the bear and were right behind it so could give the bear a right fright. It was so inconsiderate of them and I reported them to a ranger on our way back. 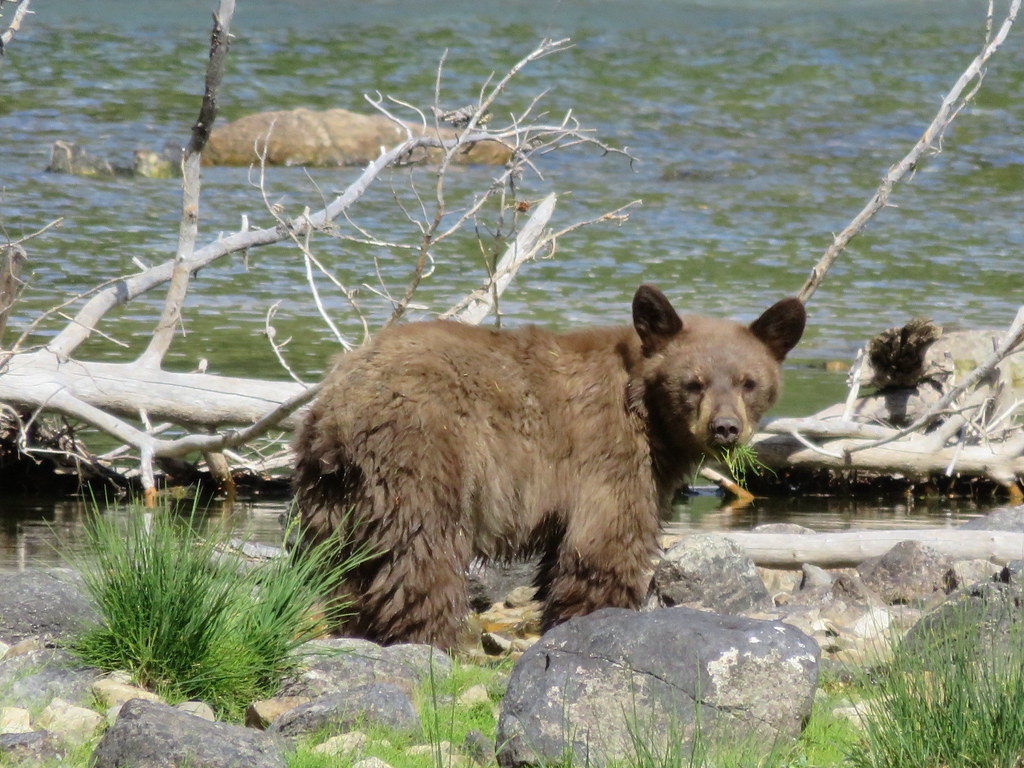 We saw a moose and calf near the road on our way back and they were busy stripping leaves from branches. It was nice to see moose again, we didn’t see any in Canada so seeing three today was quite something, they’ve turned out to be more elusive than bears! We drove back to the same national forest area as lastnight and I got halfway through my dinner before I had to drop and run. I couldn’t believe it, another insane sunset was in the making. Rain clouds dispersed slightly from the mountains and created a perfect canvas for the suns grand finale. The sky went from sunflower yellow to fireweed pink. Wowee!! 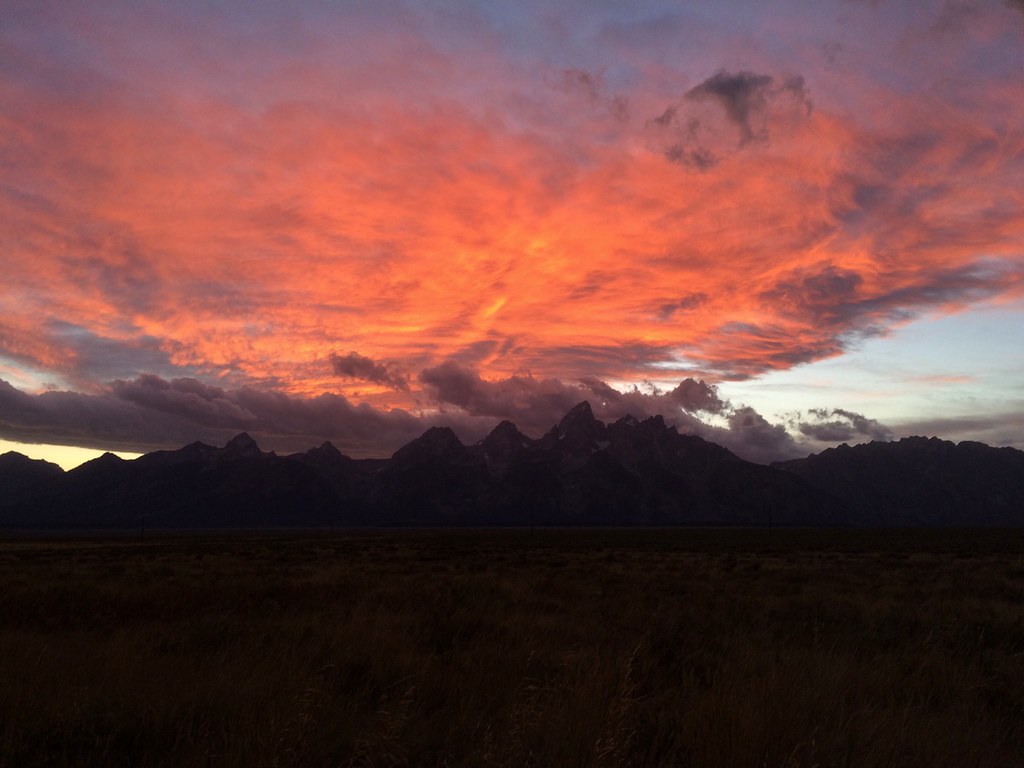