The Grand Teton mountain range has to be one of the most recognisable in the world and we were super excited to explore the area. Before entering the national park we stopped at Jackson Hole. Everyone we’ve met has said we have to go to Jackson, the name has echoed around us since arriving in the lower 48 so of course we checked it out. It’s an old Wild West town and a major base for tourists exploring the park. We didn’t fall in love with it though, in fact we didn’t see what the big hype was for. There were some sweet flat fronted buildings but it was just a tourist mecca with souvenir shops and eateries full of people in Jackson Hole t-shirts. There was a cool cowboy bar we wandered into where the bar stools were horse saddles but it was dark and dingy inside and sunny and bright outside so we couldn’t possibly sit in there for a drink on such a nice day. 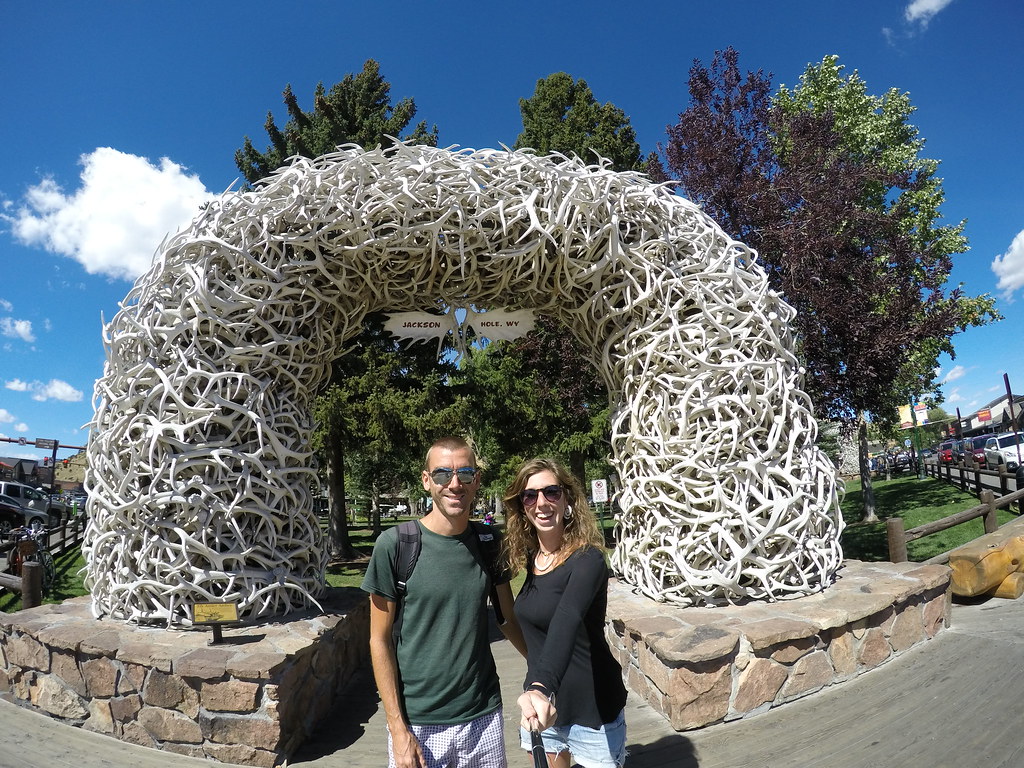 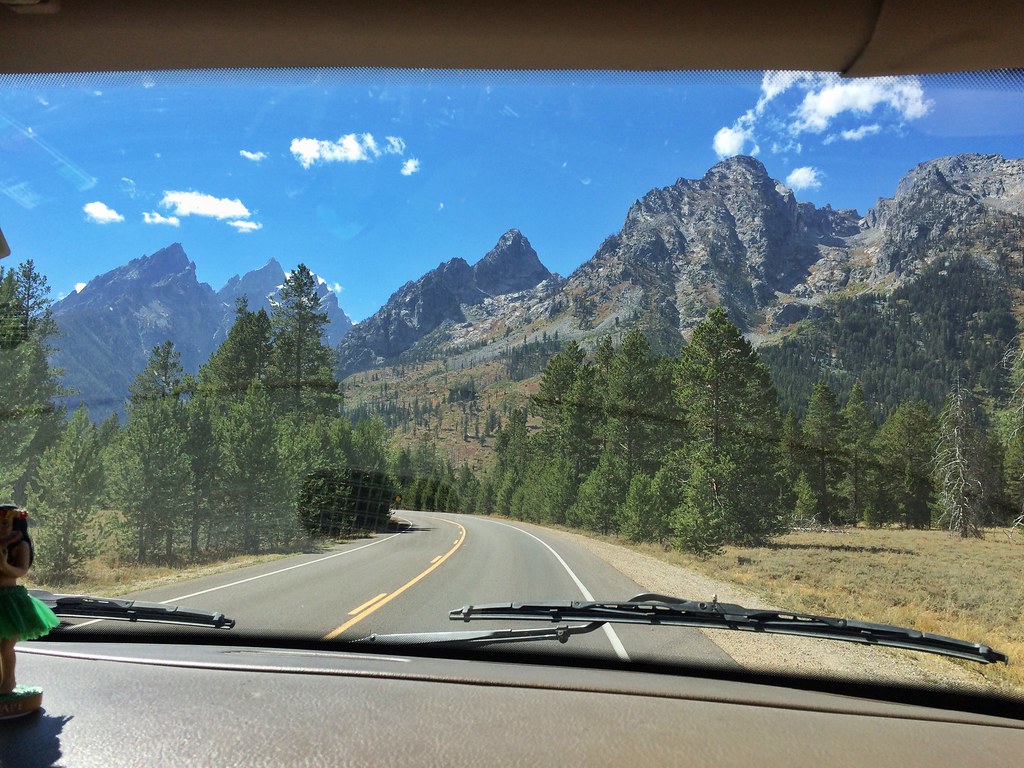 We were happy to leave town and entered the Grand Teton National Park. We drove along a wide valley with the Teton Range rising to the west and the Snake River meandering below it. It was a little late in the day for a hike so we decided to take Roland out on Spring Lake. It was a very narrow, curvy lake like a short worm and backed by dramatic peaks. The wind was a bit crazy as per norm but we gave it a go and had our longest expedition to date. We ventured all the way along the lake which had quite a few obstacles en route, mainly hidden rocks, protruding fallen trees and shallow water, not a great combination! We reached a sand bar area and the water around it was only a few inches deep so I took one for the team and abandoned ship, pulling Roland and Craig along with a rope till it was deep enough for me to hop back in. When we reached the end of the lake we did our first ever portage. Instead of carrying a canoe or kayak above our heads we were the only ones with a cheap inflatable boat getting terrorised by spiky pine trees along the path. 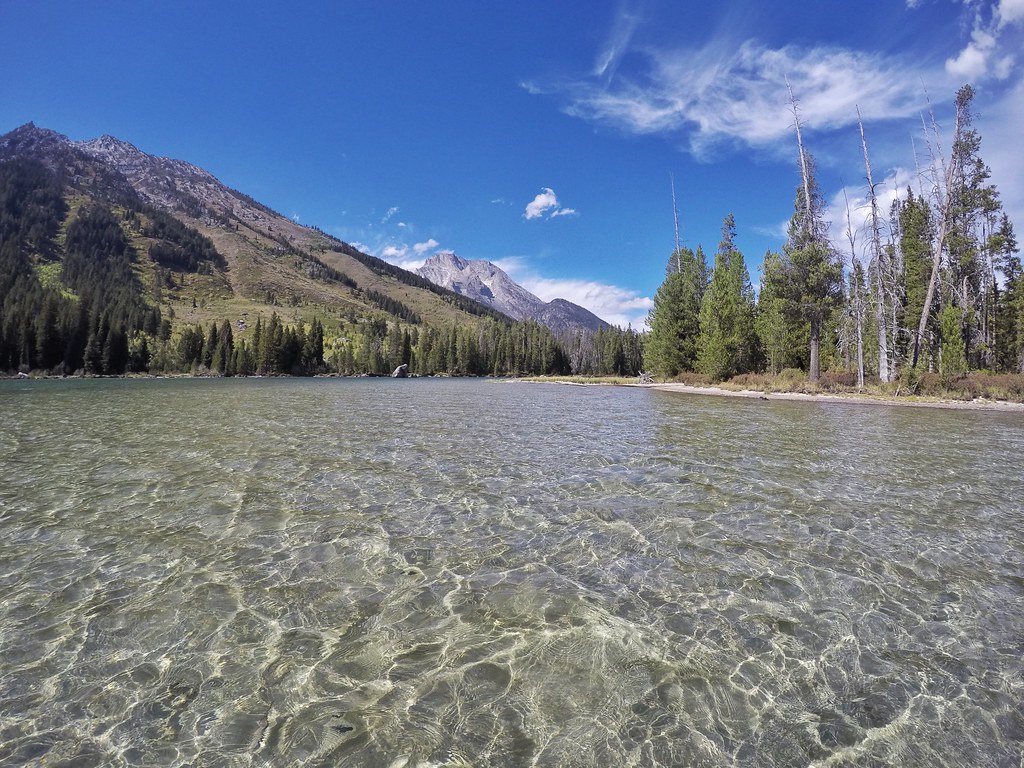 After a very uncomfortable, barefoot walk/stumble we reached Leigh Lake which was absolutely massive. An island the size of England was fairly close to the shore so we decided to take a spin around that. Unlike the shallow, sparkly clear waters of Spring Lake, Leigh was really deep, clear and more of an emerald colour. We successfully made it around the forested island, stopping en route to conquer a small rock-island which sounded like a great idea till Craig struggled to row back to me, stranded and helpless on a rock. 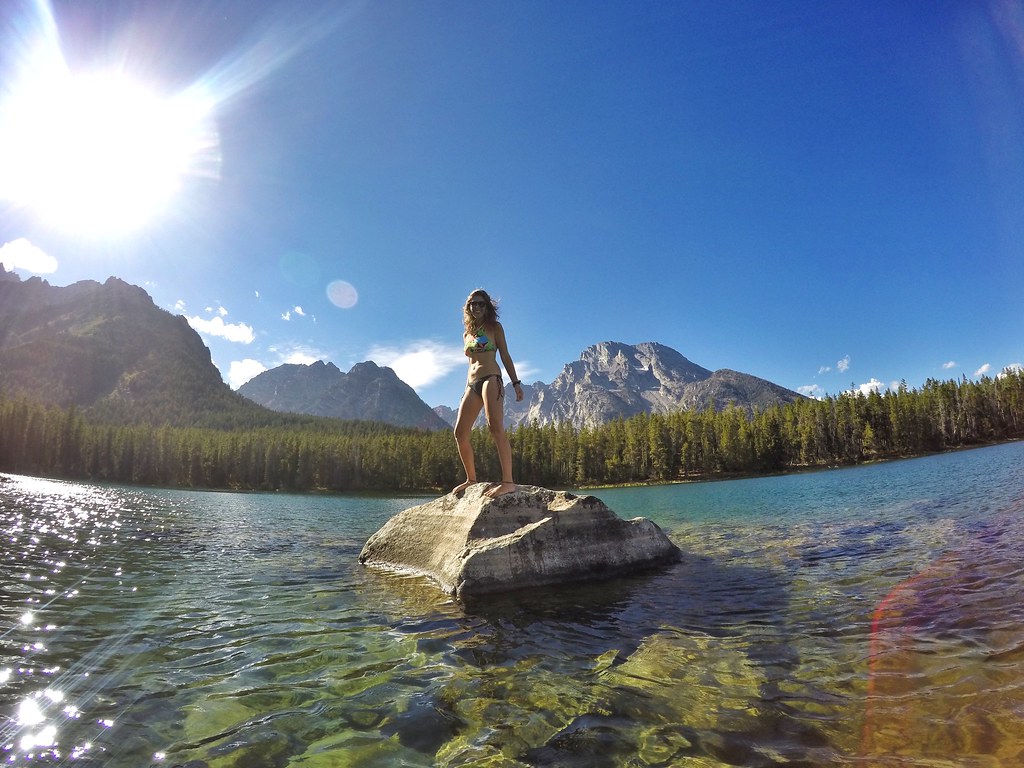 The route back took a fair while and the sun dipped behind the mountains causing quite a chill on-board but by 5.30pm we arrived back on land and hastily packed Roland away to try and find a camp spot outside the National Park. National Forest surrounds the park and is pretty much a guaranteed free spot to camp so instead of paying for a campground and arriving early in the day to get a pitch we just drove about 10 miles east and a couple miles along a dirt road till we entered the national forest and found an area with dispersed camping. There were a few other campers for the night but we found a nice spot and cracked onto dinner. The view we had was better than any campground in the park could offer; an un-obstructed view of the jagged Teton Range. The sun began to set and it looked like an amazing sunset was about to appear but then it dissipated. The next time we looked up the sky had pink lines shooting across it. I ran outside with my camera and watched one of the most intense sunsets as it turned the sky fire red and all of us campers stood by the dusty road in awe. That was until one selfish prick decided his photo was more important than everyone else’s and he walked across the dry field getting in everyone’s shot. I shouted excuse me a couple times and he apparently didn’t hear me on the calm, silent night. Later on I looked up at night sky hoping for a shooting star so I could make a wish. The wish involved the man who got in everyones photo, his tent, and a bunch of pissed off skunks. Clearly that didn’t happen so I got Craig to walk past his tent and fart instead.