Out of nowhere the scenery changed from countryside with flat, dry fields to black lava flow as far as the eye could see. It was pretty bizarre! Just outside of Carey there was a hot spring nestled in the volcanic rock so we pulled up and had quite a shock after our tranquil pools in central Idaho. There were people there…it was busy, what the hell was going on? There were ten family members just leaving (thank god) but the pool still had about another ten Mexicans inside it and a couple of bikers.

The water wasn’t as clear, nor as warm as the others we’d been too but it was about 4ft deep so we could actually swim. We sat on algae covered rocks and dangly bits of the green algae would float past with the occasional frog. I realise that makes it sound awful but for the most part it was clear with a nice gravel floor. Maybe not our favourite pool but a nice way to relax for a couple hours before finding a place to stay.

At dark a car pulled up and blue flashing lights shone through our blinds. We’d parked atop a hill with views across the flat lava field but we were right by weather equipment so maybe we weren’t allowed to stay there. I opened the door and got battered by strong winds. The officer came around while I was frantically holding down our curtains and he introduced himself with a smile and tilt of his big felt hat. He was lovely! Just checking we were OK and hadn’t broken down, he did the usual where have we come from and where are we going questions and wished us a pleasant night. How bloody sweet. Occasionally I think I’d like to be a policewomen as I hate people breaking the law, but then I imagine myself driving around on the night duty and pulling up to a random vehicle not sure who’s inside. What if it’s criminals on the run? It’s such a dangerous job I think I’d just watch bank robberies and attacks from the warmth and safety of my police car and report back to the office that I needed back up while I just remained in the car eating doughnuts and watching on like it was an episode of Cops.

The next morning we entered Craters Of The Moon National Monument. It’s a large protected area containing cinder cones and volcanic activity from as early as 2000 years ago, which sounds like an insanely long time ago to me. It was a very quick park to visit with a scenic 7 mile road and lots of short hikes and viewpoints along the way. It wasn’t as impressive as we’d both expected, we’ve seen some pretty amazing volcanos around the world so it’s hard to compete. We climbed up the steep scoria surface of a cinder cone and had views of smaller ones around us and the barren landscape. The volcanic rocks on the ground had glass surfaces which sparkled in the sun and looked like silver and gold nuggets. Some of the lava we walked past looked just like cowpat, a lot of the rocky lava would of been thrown through the air by eruptions but the cowpat stuff was where the lave oozes down like thick blood until it cools and turns black. Because there’s no activity now the park used a lot of photos of Hawaii’s volcanos to show what it would of looked like in its active days. 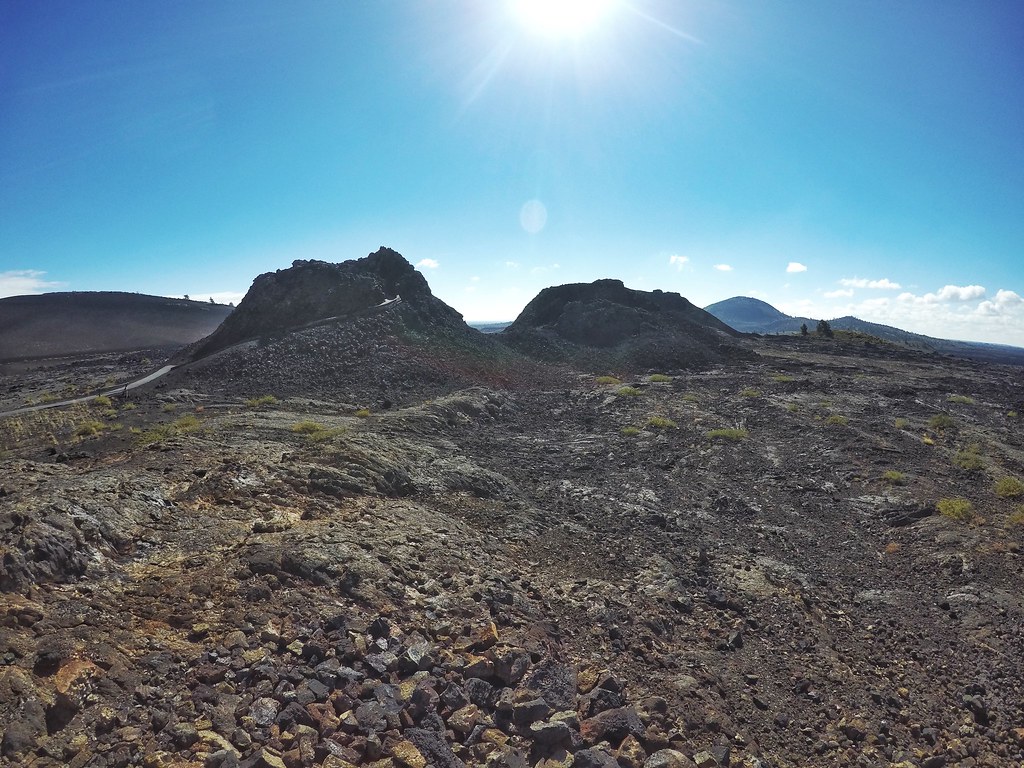 We had to get a permit before we entered any of the parks caves. It was free and we just had to answer some questions regarding any gear or clothes we were wearing being in other caves to prevent the spread of a bat disease. We followed a pure black tarmac trail that went past lava flows to Indian Tunnel. A sign before we entered the tunnel said ‘Collapse…its a lava tubes destiny’ nothing like making us feel safe before we entered. It was a popular site though so it gave us a false sense of security. The lava tunnel was huge and had three or four collapses where light beamed through large holes and huge boulders were piled up beneath. It’s funny as earlier Craig was lifting up huge rocks above his head and was amazed how light and airy they were but he couldn’t manage any of these rocks…luckily the rest of the roof stayed firm and didn’t fall in on us. We barely needed our head torch to explore so it was a nice cave in my opinion as I hate the dark. 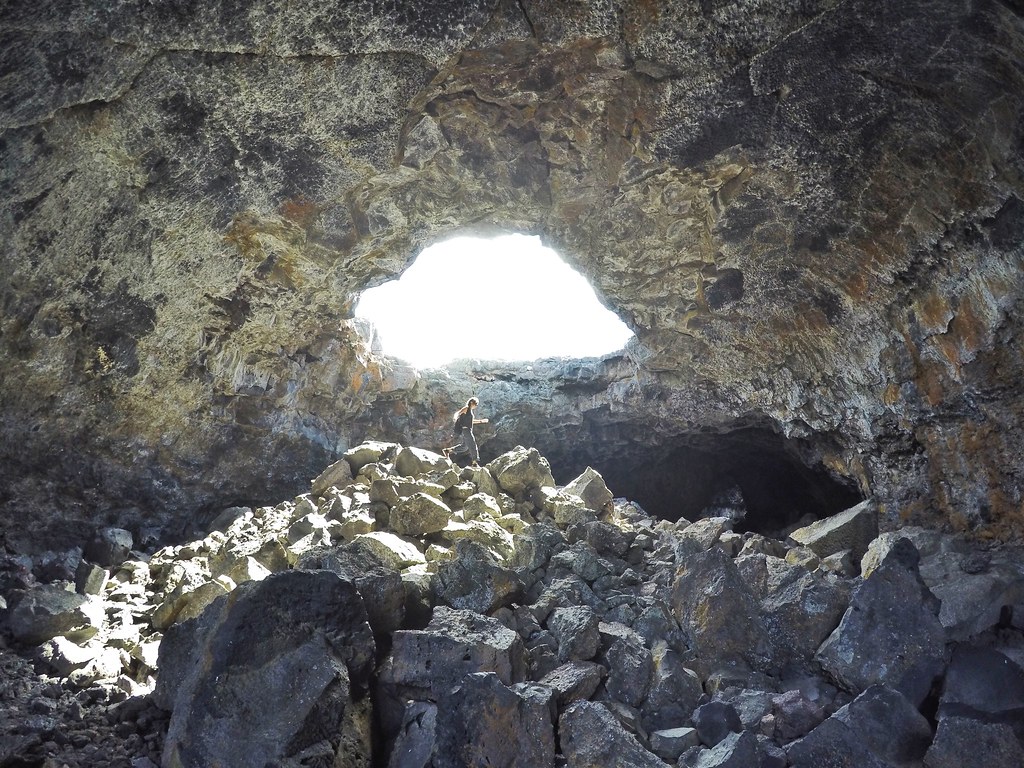 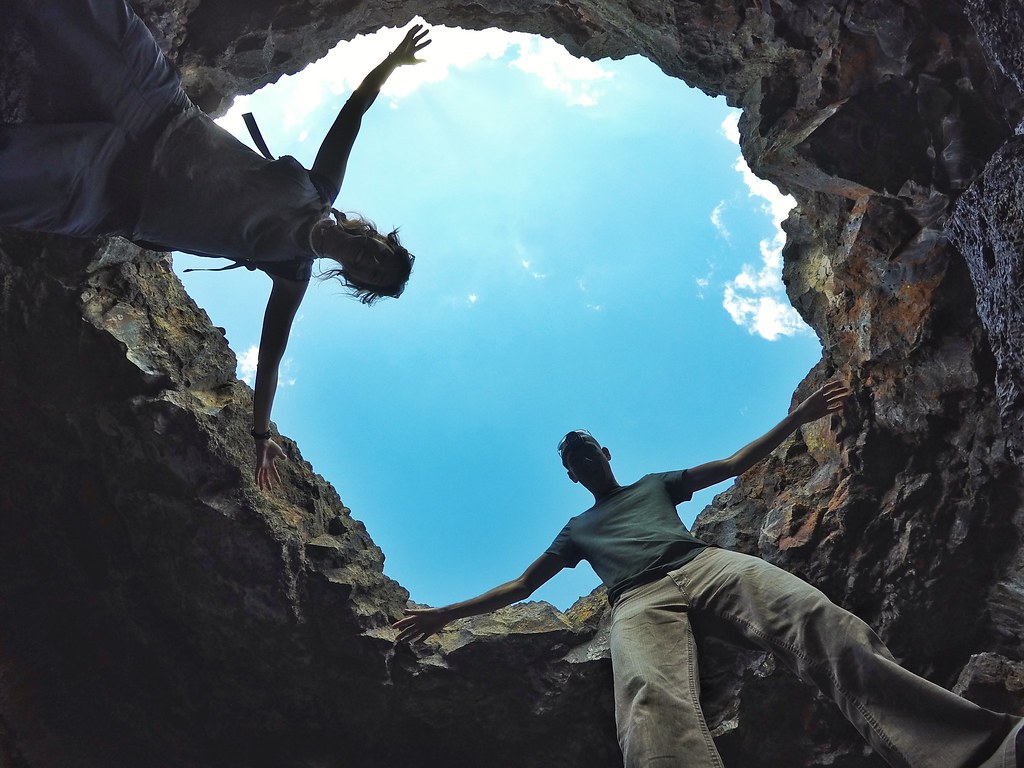 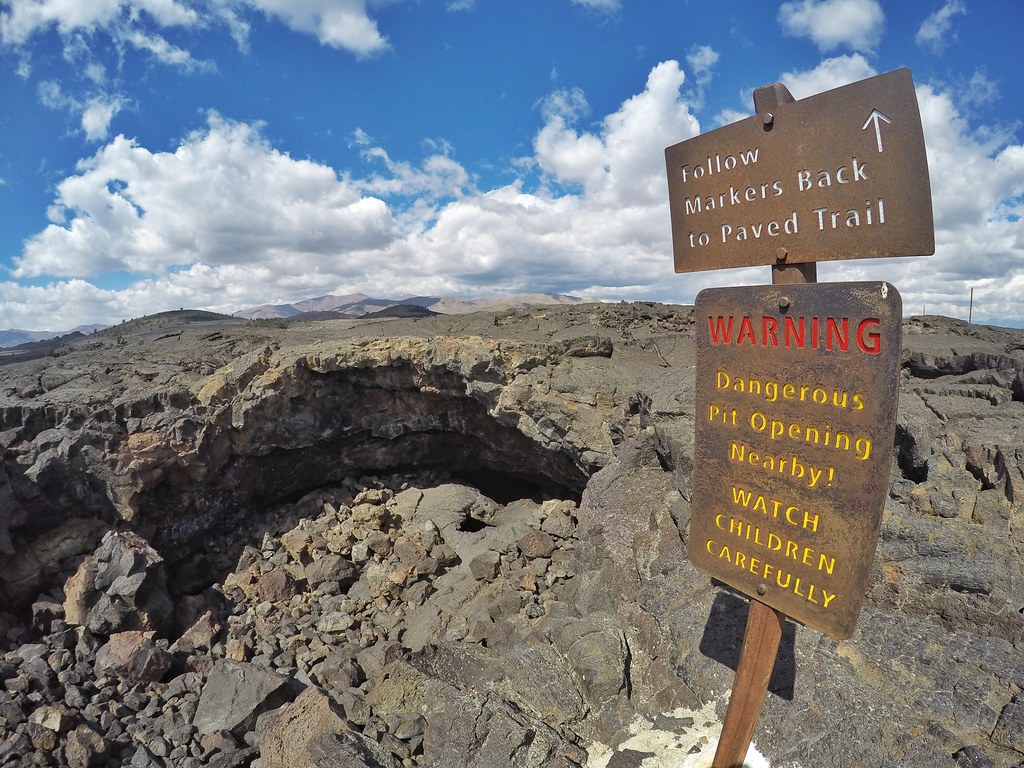 We left the park and headed east towards Idaho Falls. Two coyotes ran across the road in front of us and a kestrel nearly got splattered by our windscreen. A sheriff suddenly pulled a tight U turn ahead of us and zoomed up the road pulling over the driver infront of us. We moved over when we passed them to give them space and the officer waved at us. Maybe to say thank you for the space but I’m convinced it was our friendly sheriff from lastnight showing off his badass skills to us.