We drove south till we reached the sweet town of Ketchum nestled in an idyllic spot of Idaho. It was labour weekend so lots of events taking place but the big Wagon Days Parade wasn’t till tomorrow so we headed out of town along the Sun Valley Road for the Pioneer Cabin trailhead. The old guy at the info centre had told us the gravel road leading to the trail was fantastic condition, no washboarding, just a nice smooth ride. What the heck is wrong with people saying roads are good when their a pile of shit?! I don’t think he’d driven that round since he was a young lad. Eventually we made it to the carpark and said we’d personally hand our mechanics bill to that Man. Anyway, the trail led up 23 switchbacks through the woods and gained 2300ft elevation. It was our first cloudy, cool day in ages so the temperature was rather pleasant to hike in. We left the forest behind and traversed an alpine area of grassy hills and ridge-lines with views down sun valley and three mountain ranges. 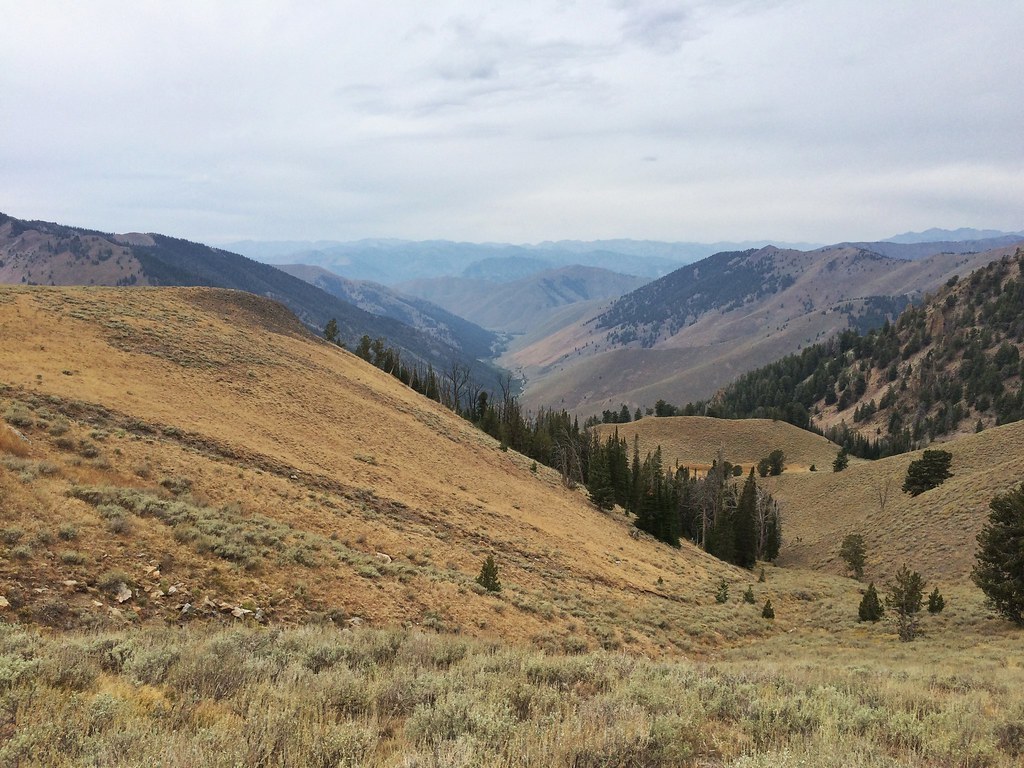 After just hills we were finally confronted with proper mountains, big grey peaks and jagged ridge-lines. As we headed towards the mountains the Pioneer Cabin suddenly appeared below us. It was a rustic log cabin built in 1937 to encourage skiers to the area. In the end they decided the area was too beautiful to cover with ski lifts so they left that patch of wilderness along with the lone cabin for snow-shoeing and hiking. The cabin had a motif painted on its roof, ‘The higher you get, the higher you get’ I’m not sure of the significance to this but it made a good photo. 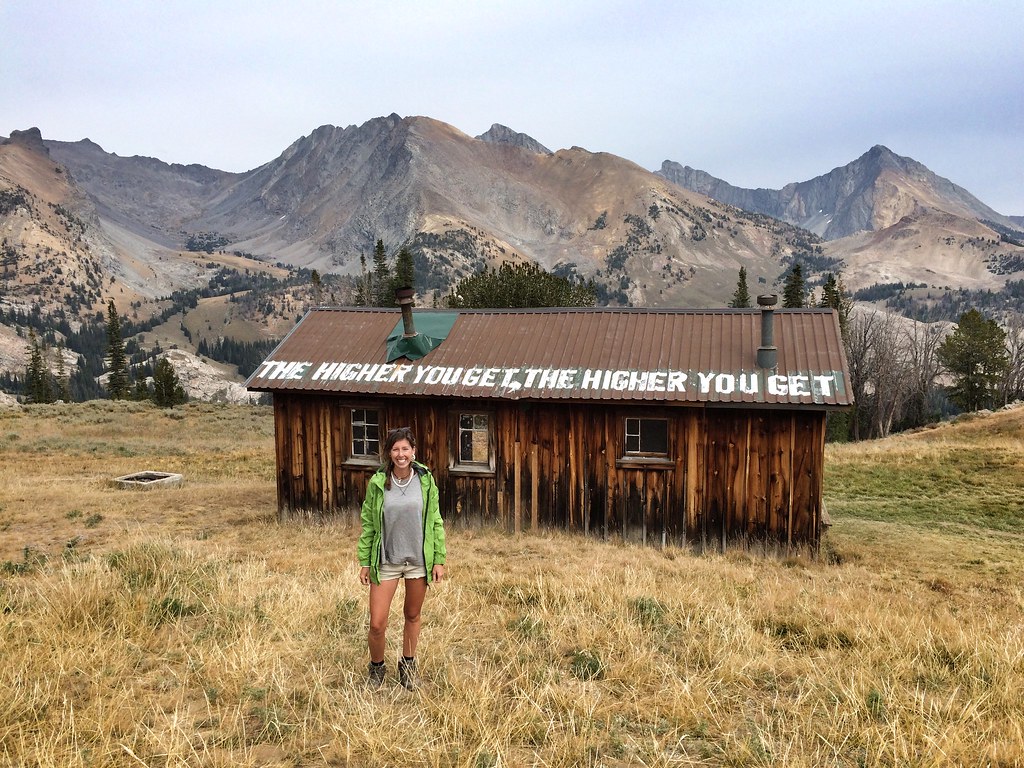 We entered the cabin and were surprised to find it so equipped. The main room had 4 bunk beds, sleeping bags dangling from beams, a log burning fire, gas stove, table, chairs, pots and pans and even a shelf full of bits and bobs. People swapped items they had for things they needed. There was a pile of log books which everyone signed, maybe to encourage people to write in the book and not on the walls as hundreds of people had done. The joining room was a really creepy extension with two bunks and a hammock style chair hanging down. It was a bit Blaire Witch for my liking. I filmed myself walking through the cabin and as I entered the creepy room Craig was sitting in the hammock with a crooked neck and bulging eyes. He also did screaming faces through the window while I was taking photos from the outside. Don’t think I’d fancy a night camping there. 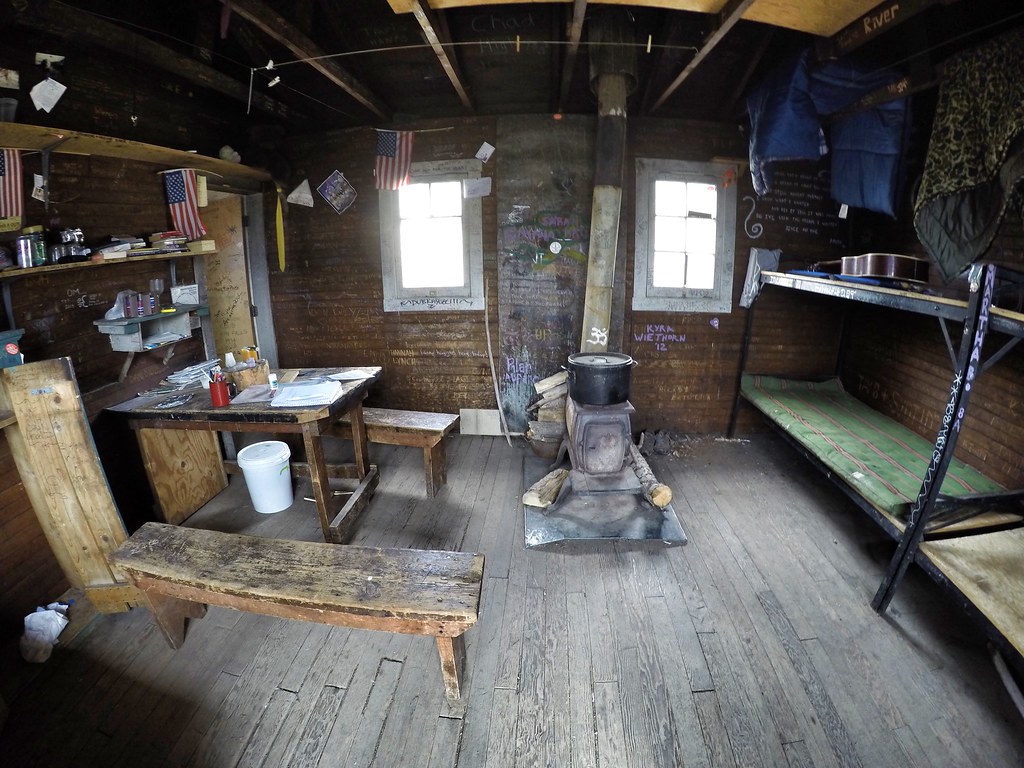 We left the cabin and headed the opposite way as it was a loop hike, rather exciting to do a loop after so many one way in, one way out hikes recently. It was a steep, dusty descent with a section along a huge rock pile down a mountain side. After crossing a creek the trail began turning back on itself and I was panicking that we’d missed a turn off. We normally hike in the morning but today we started late and it was now past 5pm, I hadn’t had my afternoon cuppa and I really didn’t want to hike back in the dark in wolf habitat. Thankfully it led to a view of more peaks and then up (I hate hiking back up after feeling like I’ve conquered the climb) a ridge which we followed the whole way back. We didn’t pass a single soul the whole way back except for a lone horse tied to a tree and a canvas tent nearby. Someone later told us that he would of been the shepherd and his sheep are guarded from predators by Great Pyrenees Mountain dogs; the HUGE white polar-bear like dogs which are unbelievably friendly, unless your a wolf that is! The next day was the towns big parade and we managed to find a spot to park along a grass verge which was lined with cars and picnic chairs reserving their spots. I thought that was just a German thing but the town was lined with chairs in prime locations. Before the parade started we watched a young group of bareback riders. They were between 8 and 18 and some of the girls were tiny. Everyone was dressed like Pocohuntas except the two boys who had brightly coloured feather headdresses. They made bareback riding look easy, but I know it’s not. All they had was a belt around the horses neck to hold onto but they even demonstrated riding without the belt and they used their body language and movement to direct the horse. Some had Spurs on their moccasins but most were natural. It wasn’t a riveting show after going to a rodeo but it was very skilful. 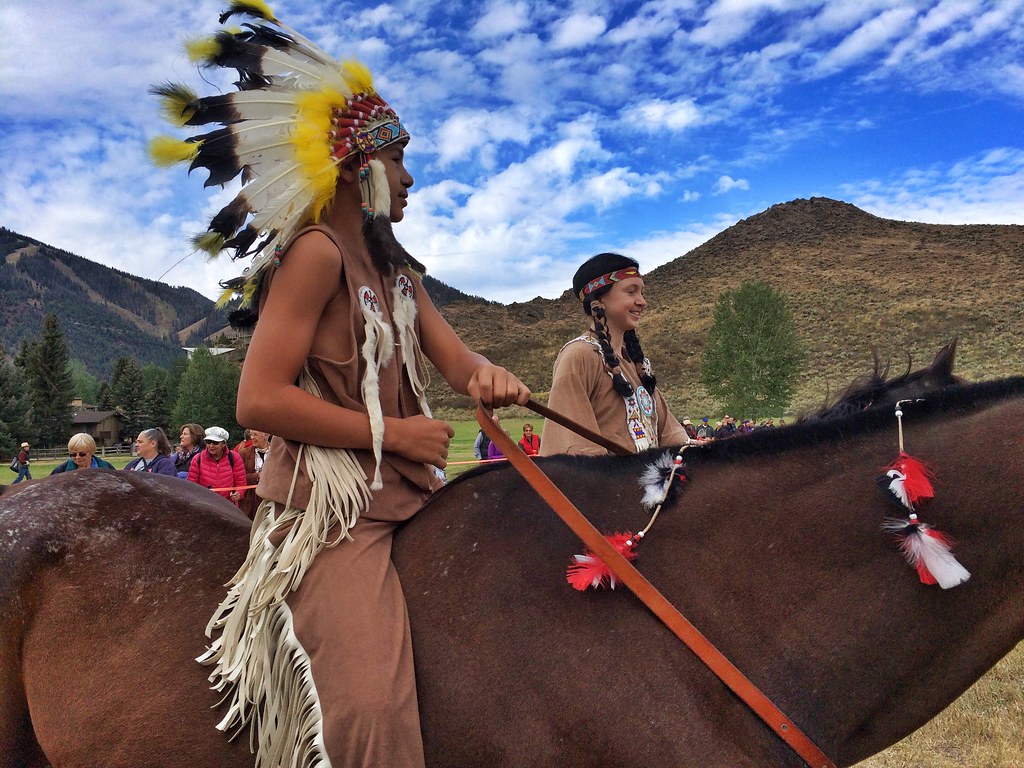 We made lunch and grabbed a pew by the roadside to watch the largest non-motorised parade in north western USA. A variety of horse-drawn wagons and buggies trotted past us with the proprietors waving proudly and even a few complimenting the look of the sandwiches i’d just made. Most people involved were dressed the part like old Cowboys and ladies in bonnets and frilly dresses. One old chap had a beard he must’ve been growing since he hit puberty and a rustic hat that he probably hadn’t taken off since he was a kid. A large procession of horses came down with every rider swaying a USA flag and in matching shirts. There were men standing atop their horses with legs spread across two shiny black horses. 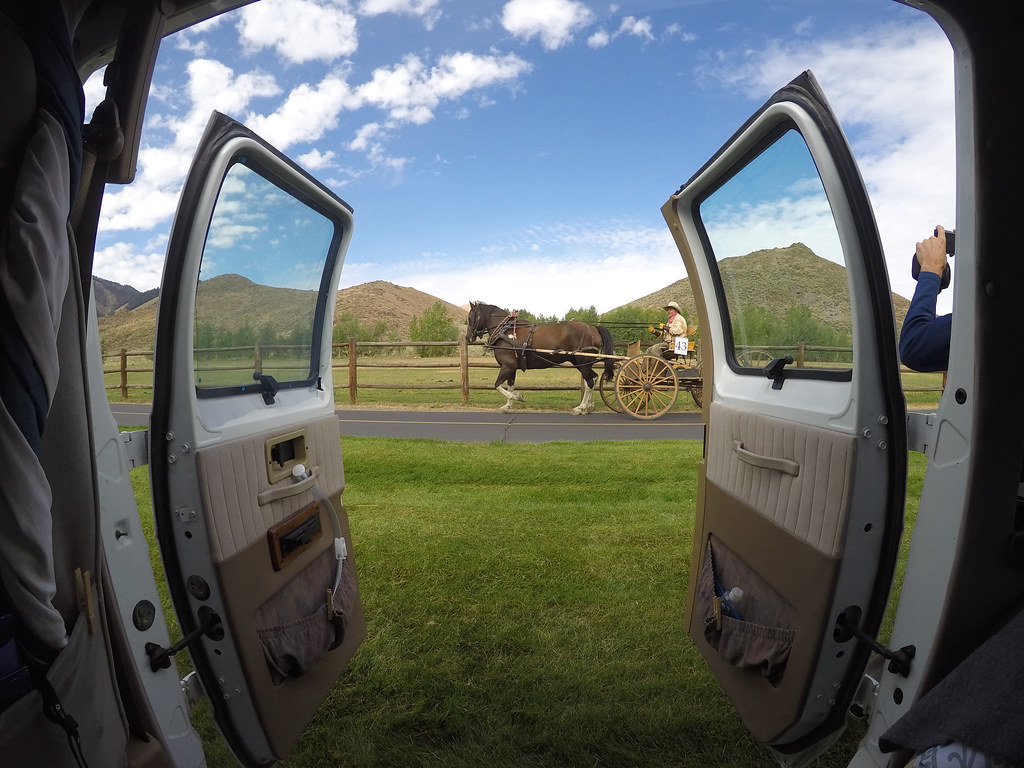 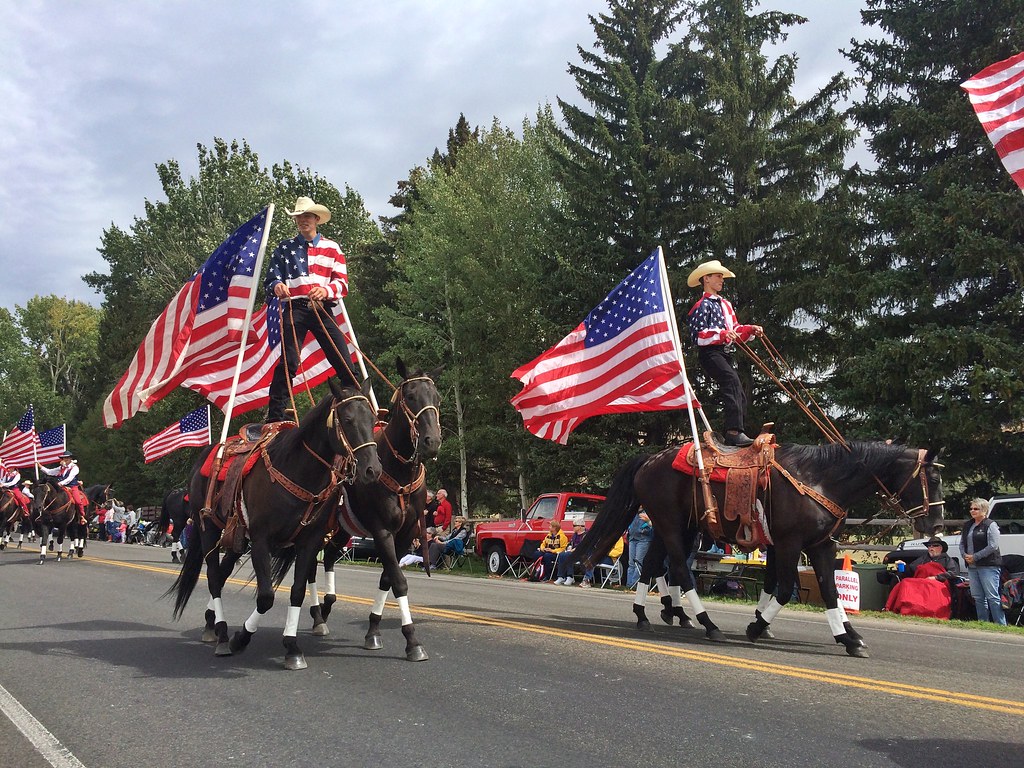 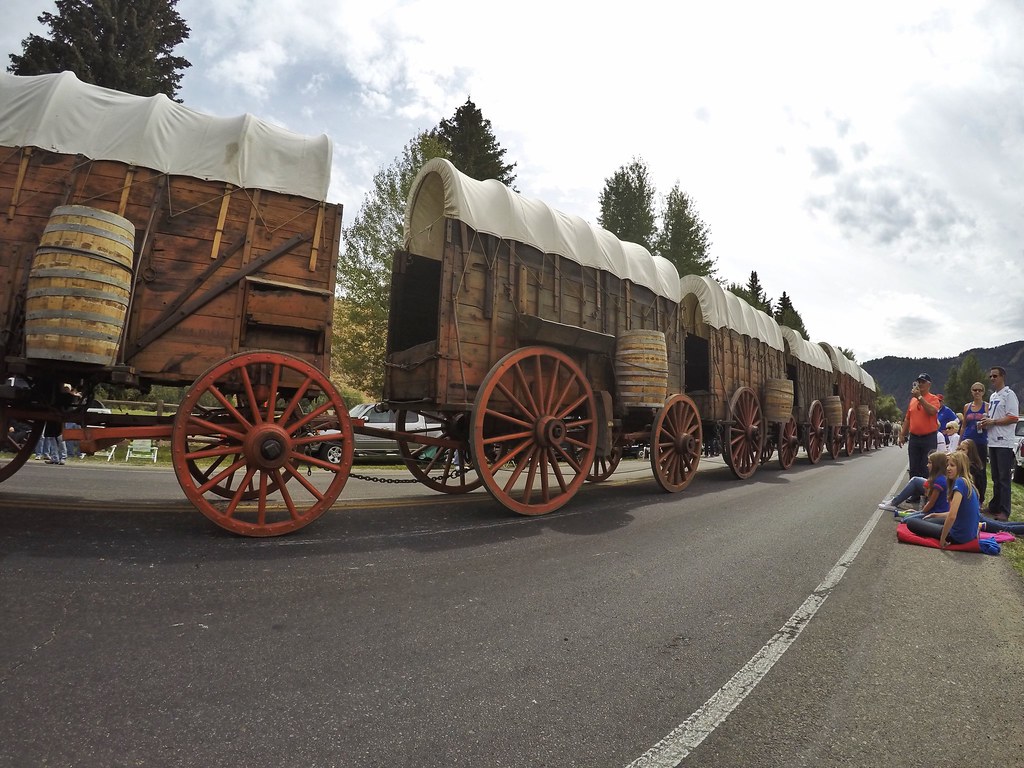 I particularly liked the miniature horses that came by, one of which was looking very down in the dumps attached to a mini wagon pulling a lady double the horses size! There were three Miss Rodeos who were like pageant queens but on horses and in sparkly cowgirl clothes, neatly ringleted hair and fake smiles. The grand finale was about 12 horses pulling 6 large covered wagons. It was a fun event and our neighbours were full of conversation. Two chatty Cowboys to our left were from Arizona and said where they come from they ride their horses to each bar. Ain’t no drink driving rules on a horse I guess! They offered us wine which we kindly declined and told us a joke which I’ll end this blog with, for maximum laughter.
‘There’s three potatoes walking down the road, how can you tell which ones the prostitute?………..Its the one wearing the potato sack with ‘I DA HO’ written on it’.