We couldn’t resist another night under the stars soaking in one of Idaho’s many idyllic hot springs so we headed back. The skies in this area are said to be the clearest in the lower 48 and the moon was non-existent for our visit. We weren’t alone for our second night, a local guy was in the cauldron hot tub while we laid in the shallow pool. He spoke to us once and I considered my nearby weapons if he turned out to be a murderer but luckily it didn’t come to that and he left so quietly that we didn’t even realise until his car engine started. It was really mild outside so I was half in, half out the water resting on a perfect lounging rock when the BEST shooting star shot through the sky. Much to our surprise it went behind a cloud and came out the other end still just as bright. It was so incredible and intense that it didn’t even look real. They don’t get much better than that! 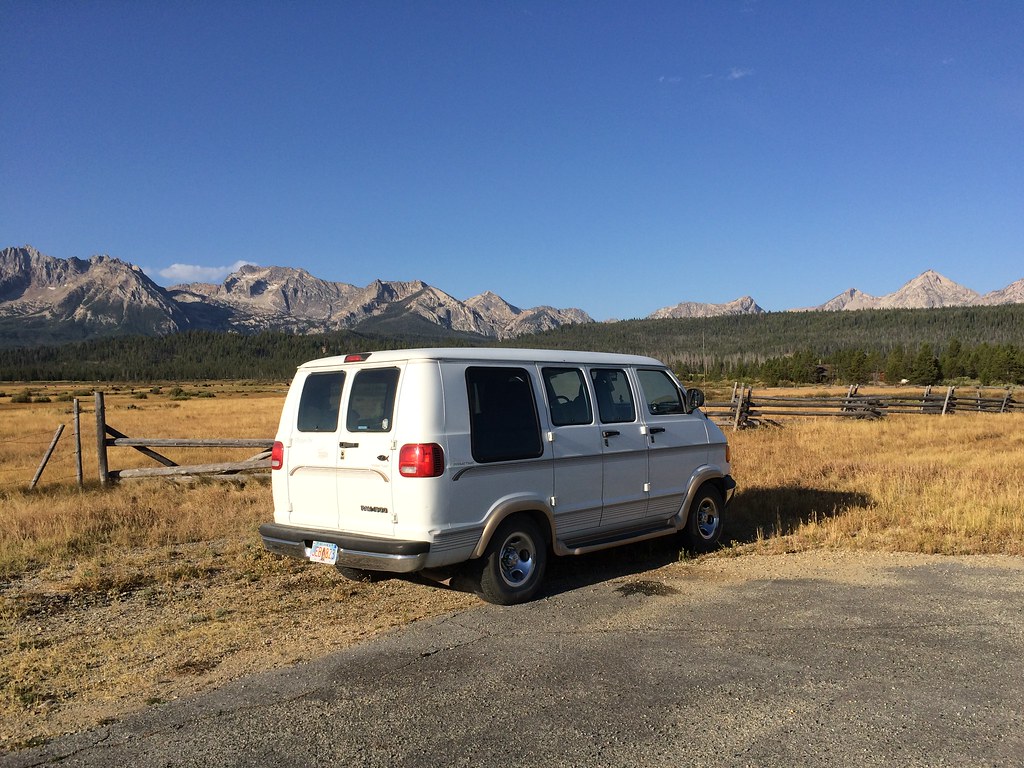 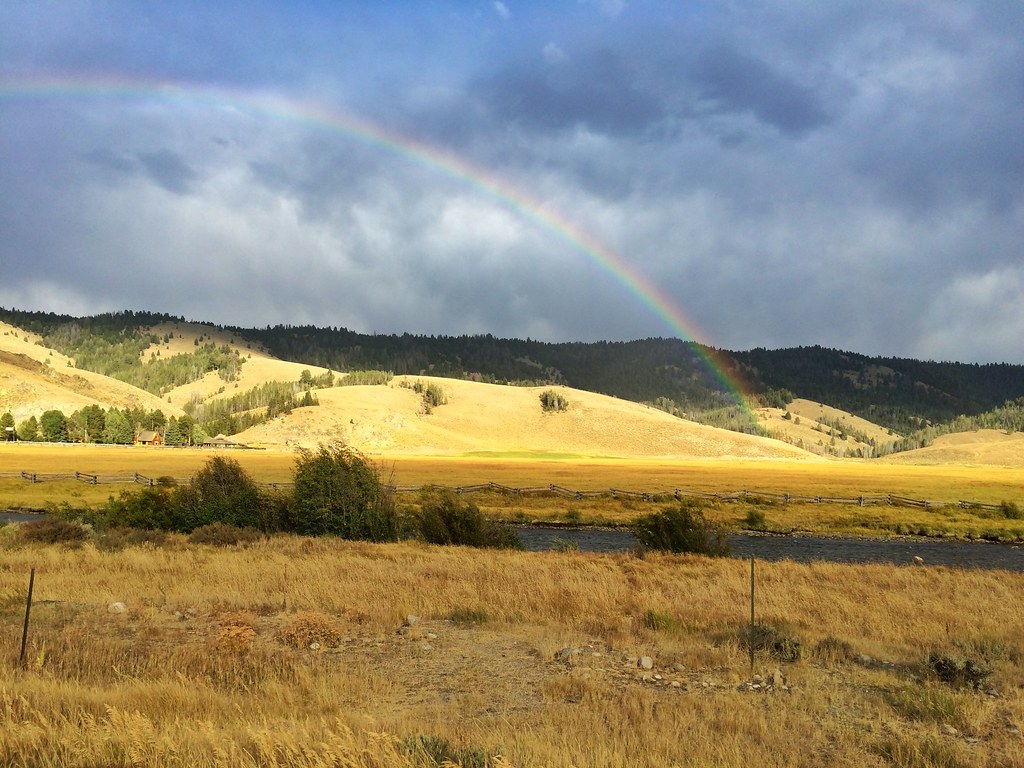 We woke up to a perfect day with mountain views right outside our window. Sadly we did a terrible hike to a waterfall that wasn’t actually visible and involved an extremely dangerous and slippery hike up the steep mountainside…such a shame we picked a crap hike when there were so many fabulous ones in the area. But never mind, we were still loving the area and enjoyed a day of stunning views. We checked out Stanley Lake which had a huge rocky peak across from the pristine shoreline. The road to Stanley lake took a different view across the sawtooth mountains, so ridge lines we hadn’t seen before suddenly appeared and they were wonderfully jagged like a saw. 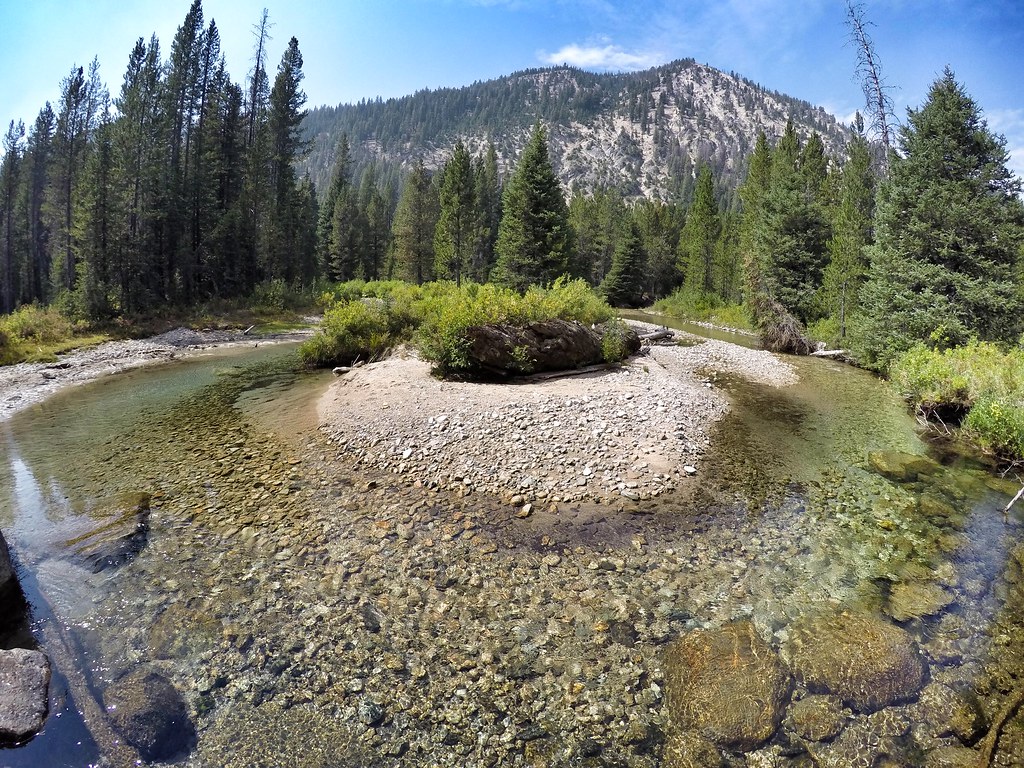 We revisited Redfish Lake to see the peaks reflected in calm waters and checked out some salmon swimming in a nearby creek. They were tiny salmon so we tried to find an area to spot the big Chinook or King as their also called. We missed our turn off and ended up at a fish hatchery and it was quite the fascinating detour! 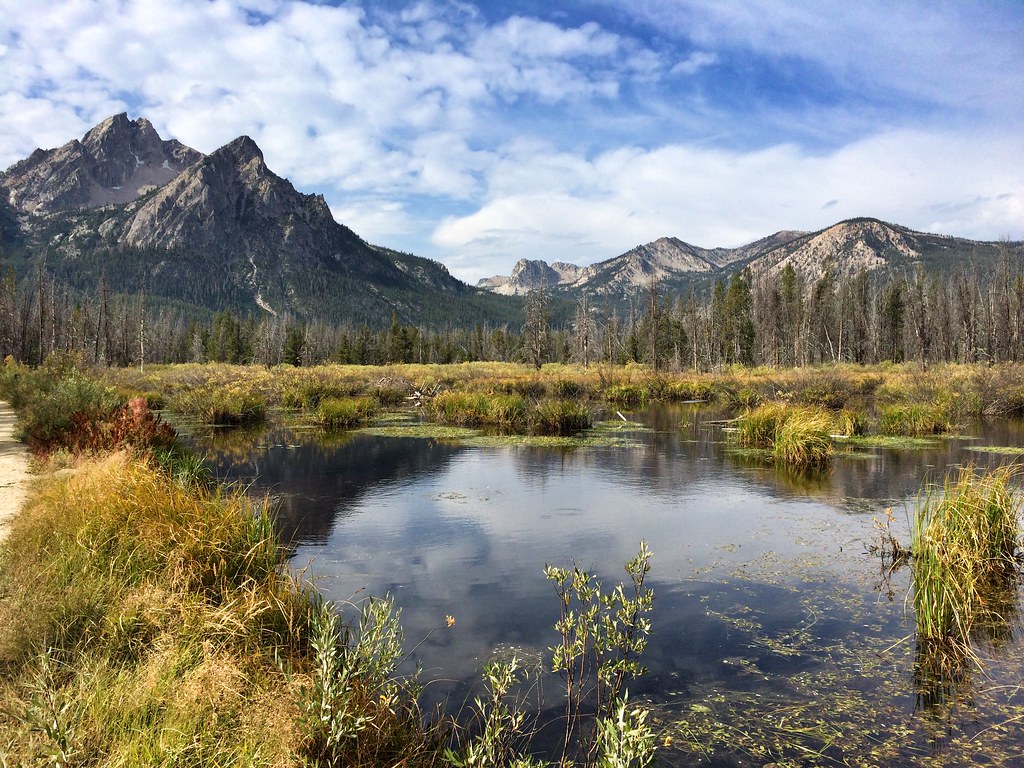 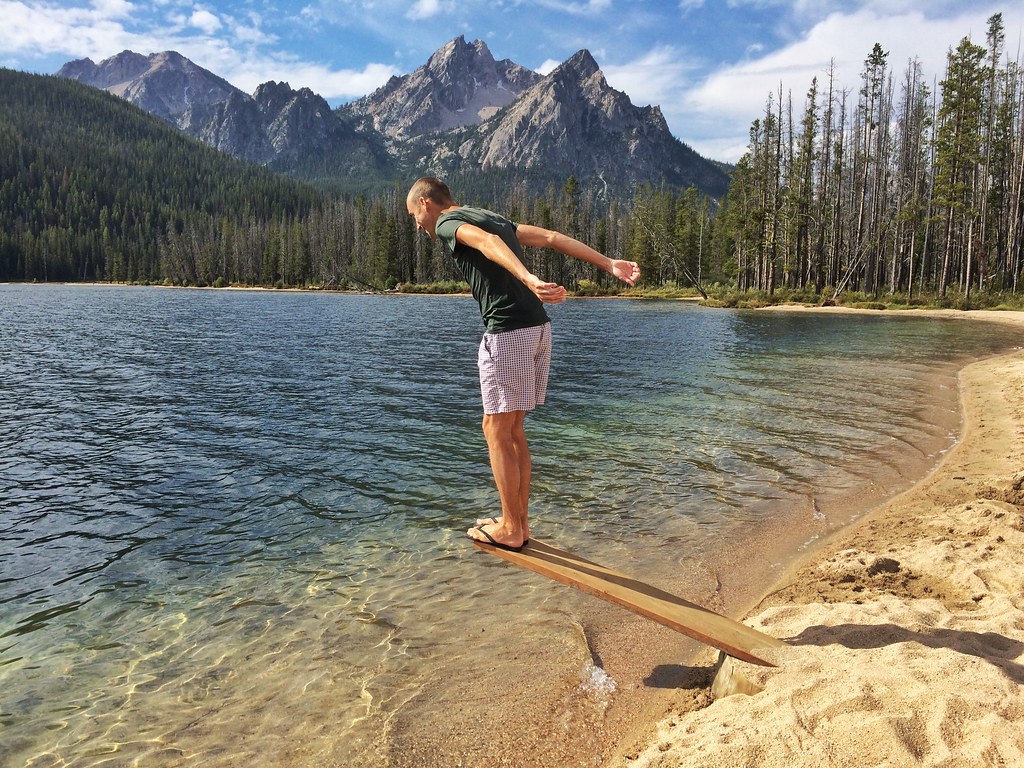 There was an open production line where they sorted and weighed the salmon. Female ones were weighed, then abruptly whacked on the head two or three times with a baton to kill them. It was brutal to watch but all for a good deed. The fish murderer would then cut the tail slightly and lay the fish on a rack. Then a man would hang her up and cut a hole in her stomach. Bright orange eggs would begin pouring out like a stream of water and then he’d slice all the way up her belly till thousands of eggs fell into the bowl below. It was nice to see that every egg counted, if one measly egg didn’t make it into the bowl the worker would have a slippery job picking it up and making sure it joined the others. The fish and surface were sprayed clean, the eggs transferred into a bucket and the fish passed onto a lady who cut a liver and kidney sample. I don’t know what happened to the females after that point. 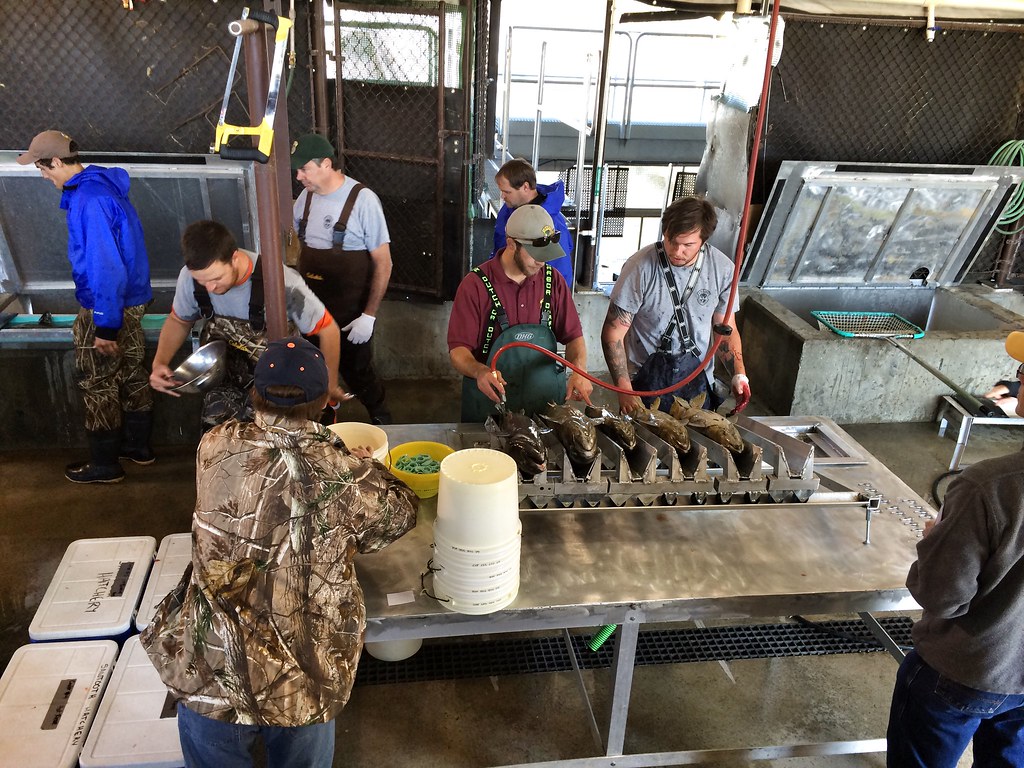 Now for the male salmon! These guys were fished out and weighted as well, and they were pretty damn big, minimum 2ft but sometimes 4-5ft long! The male would then be held by one man while the other dried its belly with kitchen roll and then rubbed its belly…oh geez I thought, is this really happening? They were basically tossing off a salmon. Sometimes both men would rub the fish and within a few seconds (bless ’em) they would ejaculate. The workers would aim it so the semen (I can’t believe I’m writing this…this seems like such a fucked up way to boost the salmon population) squirted into the bucket of eggs and it would fertilise them within 2 seconds! Another man would then cut a tiny snippet of the salmons tale and neatly stick it on a page where he had codes, weights etc to identify each fish. Image these guys going on first dates when the lady asks what they do for a living…

Man one: “I’m a salmon murderer”

I actually found it all very fascinating though. The chinook salmon are protected in Idaho and once they are born they’ll swim backwards down the Salmon River till they reach the Pacific Ocean. They’ll feed there for one to three years until it’s their time to migrate back up the Salmon River swimming 900 miles, gaining 6000ft altitude and passing 8 dams until they reach the spot where their parents spawned them. In the wild there’s a 5 – 10% chance that the eggs deposited will survive, but there’s a 90% survival rate at the hatchery.

We continued along the stunning Sawtooth Valley past idyllic ranches until we turned off for Pettit Lake. The road was only a couple miles but it was awful condition (what’s new ay?) so we were moving along at approximately 5mph. It was well worth the drive though as the lake was damn right gorgeous! The crystal clear water and sandy beach looked like a postcard from Thailand. Awesome craggy peaks circled the lake and we didn’t waste any time pumping Roland up. I made a pack lunch while Craig got the boat ready and then ran up to tell me we needed a plan B. Winds had come out of nowhere and the lake now had whitecaps! We tried a couple other access roads and it was the same story there. Hell, we can’t drive a road like that and not make the most of it so we put Roland in and battled the winds. 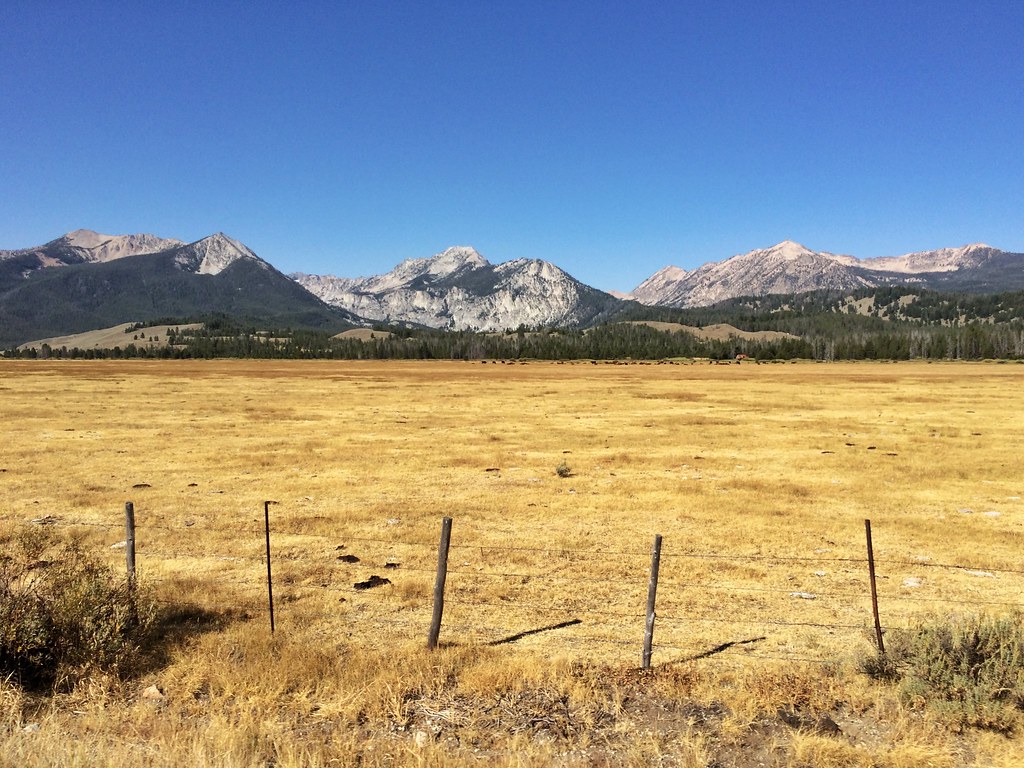 We stuck to the shoreline which was a lot calmer and admired the many log houses amongst the forested shore. Man…life’s good in America. The amount of people that have a home and a lakeside summer house, an RV, two pick up trucks, a boat, a quad bike…the list goes on, it’s just crazy and nothing like England. So we slowly paddled along and discussed which house we’d like and compared the perks to each one. Most homes had a wooden jetty, two boats, canoe, kayak, water-skis, wake board, ski biscuit, fishing rods, paddle boards…if a shop sells it, they’ll buy it. In England the average Joe would be lucky to get anything more exciting than a push bike and a paddling pool. 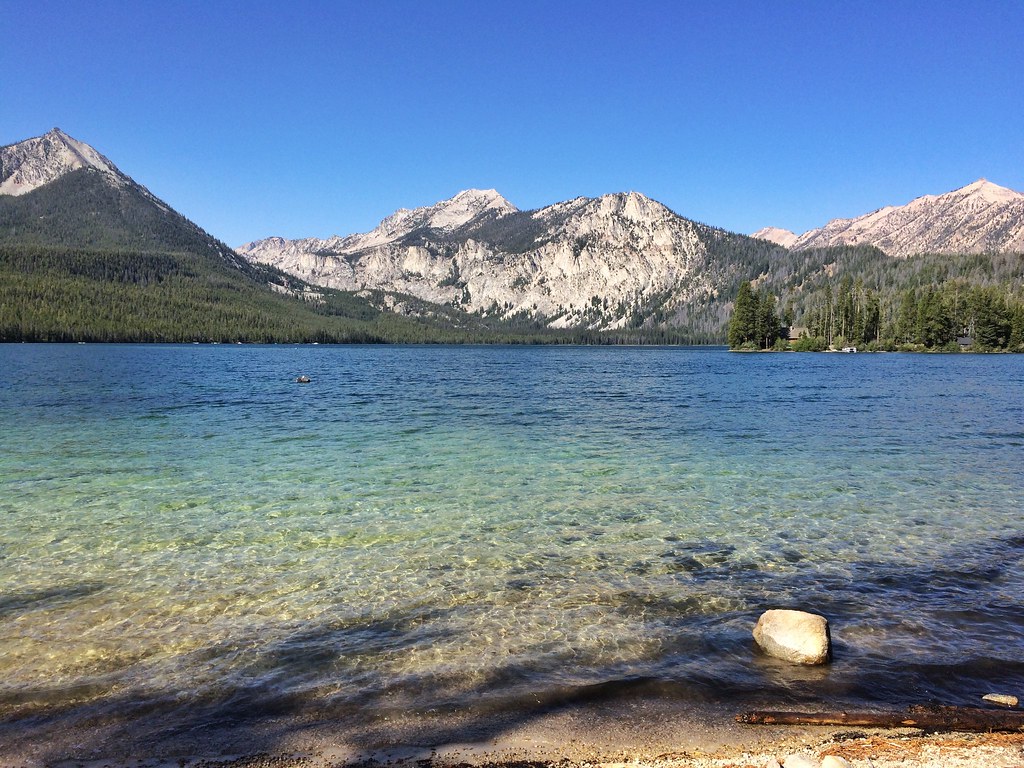 Anyway, the wind calmed down for us to have a floating picnic and then picked up again as soon as I opened our can of drink. Craig was saying how at least the wind will blow us back, but of course it changed direction and he had quite the workout to get us back to Daphne. We could watch the wind coming as the surface of the water darkened and rippled towards us. 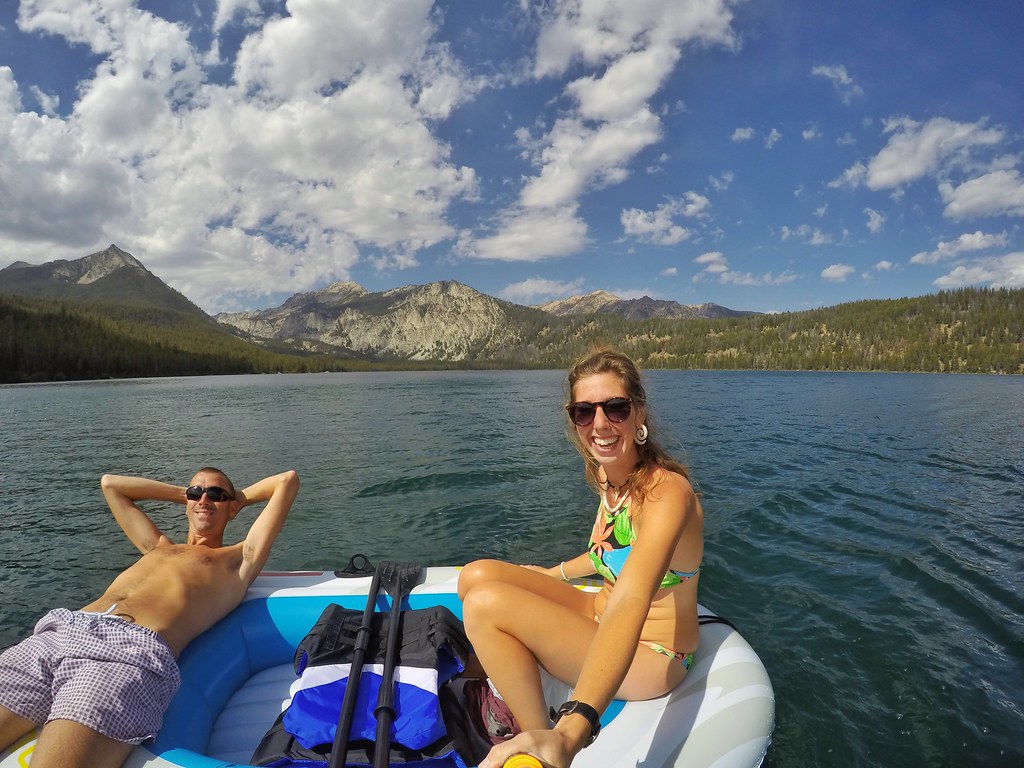 We left the stunning area and headed up Galena Pass where we did a short walk to Titus Lake. We were the only people there once again and braved a plunge in the small green lake. We quickly regretted this decision as the winds tormented us some more and we had a shivery walk back. We wound back down the other side of the pass and left the dreamy sawtooth wilderness behind us. It was better than we’d hoped; a rugged area that was little travelled, offered incredible mountains, free camping, amazing hot springs and nights filled with shooting stars. 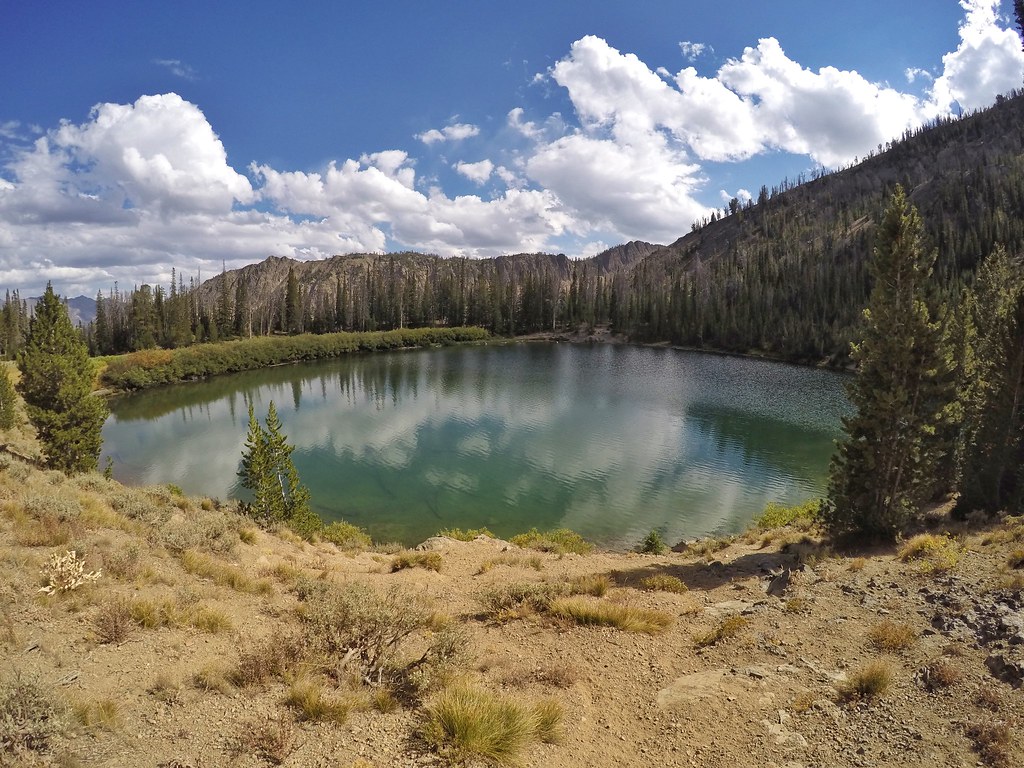