Craig and I have somehow managed to last 9 years together…with how much time we spend together it’s probably the equivalent of 25 years of marriage!! We woke up in a stunning location where the dry grassy hills all turned orange in the rising sun and deer darted away from our van as we opened the doors to the crisp morning.

We hit the lonely road and continued to wind alongside the scenic Salmon River. A sign said something about a historic site and hot springs and we were about to drive right past until we saw the ground beside the road was steaming and stained orange and yellow from sulphur so we did a U turn and parked up. A pipe led the scorching hot water under the road where it poured into rock pools. We didn’t waste any time getting into our swimmers and were dashing down the dusty track. We sunk our feet into the crystal clear pools and before we could wade in anymore we both frantically jumped out and landed on the nearest rock to escape the boiling water.

Luckily it cooled down in the pools closest to the river and was absolutely delightful. It was early in the morning so nice and cool outside which meant the water was steaming around us and we had the place to ourselves. When it became too hot we’d jump over the rocks and dunk into the icy river. What a fabulous way to spend our anniversary!! 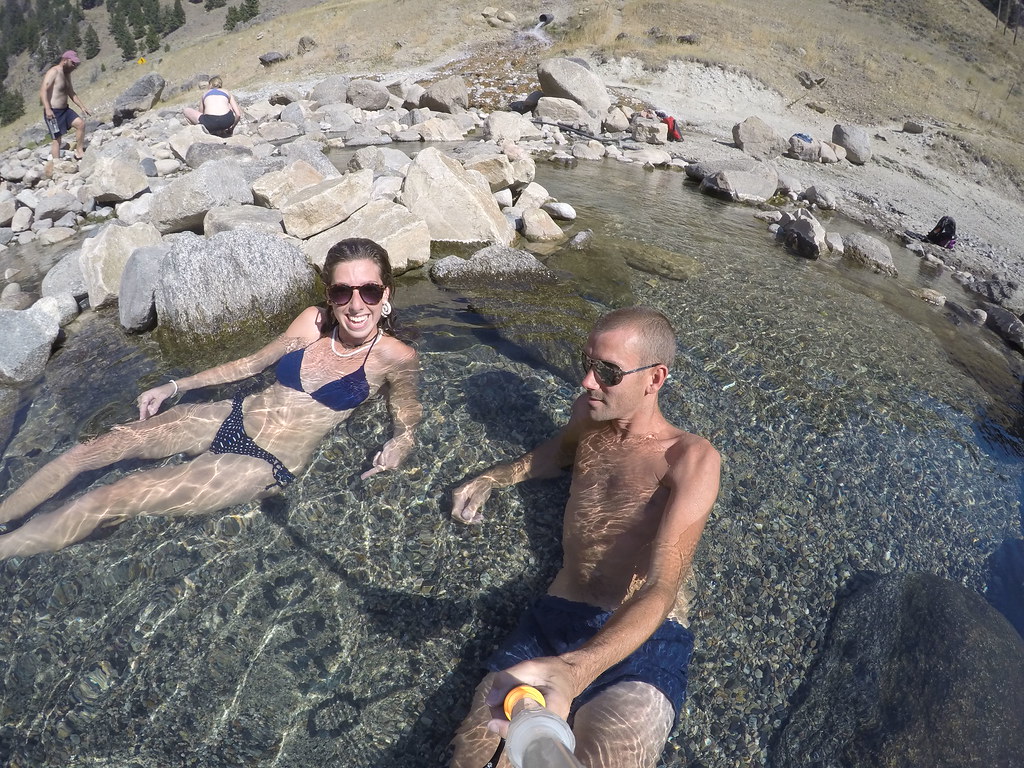 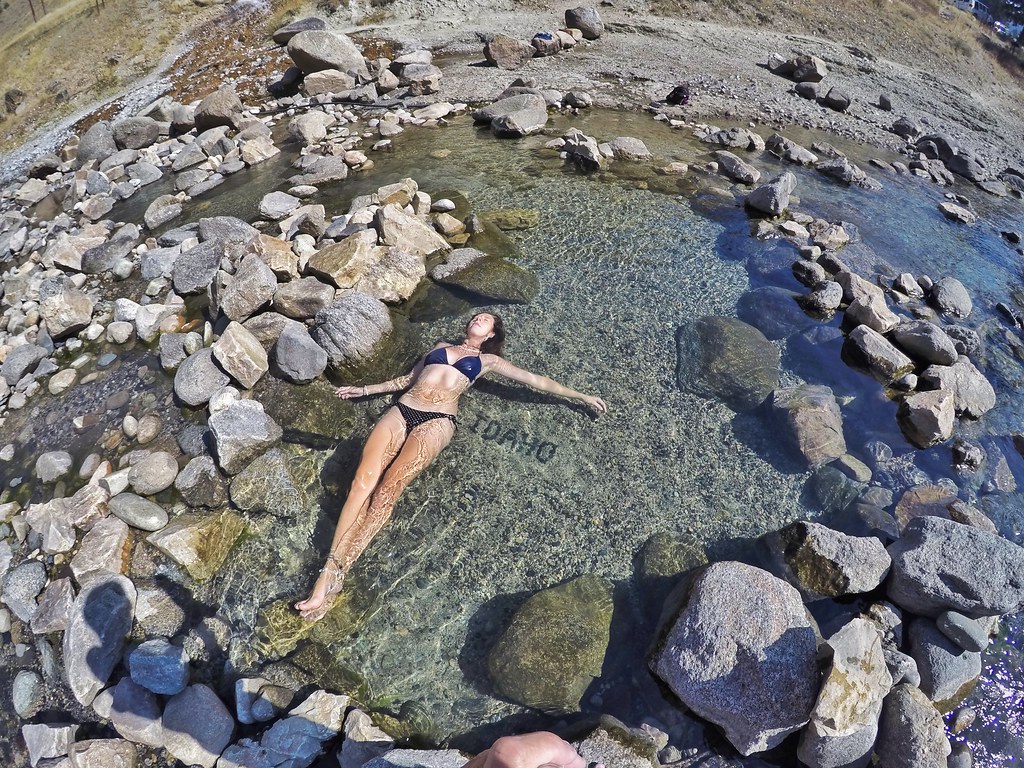 A few people turned up after a while but we got chatting to a friendly dad and daughter who live nearby. The dad also took a dunk in the river but went into the rapids and it really showed the speed of the river as he flew past us in a flash! They told us that Idaho has more hot springs than any other state. Well we definitely made the right decision coming this way then, what a pleasant surprise.

Feeling ultra refreshed and rather snoozy we continued on our journey where we got our first glimpse of the Sawtooth Mountains! Hooray! It was actually quite cloudy but we could clearly see how they got their name as the ridge-lines were very spiky. We pulled up besides Little Redfish Lake and took Roland out for a paddle. It was a perfect sized lake for us as we could explore it all which is a rarity. The sun came out and the water began glistening beneath us while bald eagles flew above us. We moored up on a beach where I got off-board first and sunk about 4 inches into what felt like quicksand so we hastily set sail again. 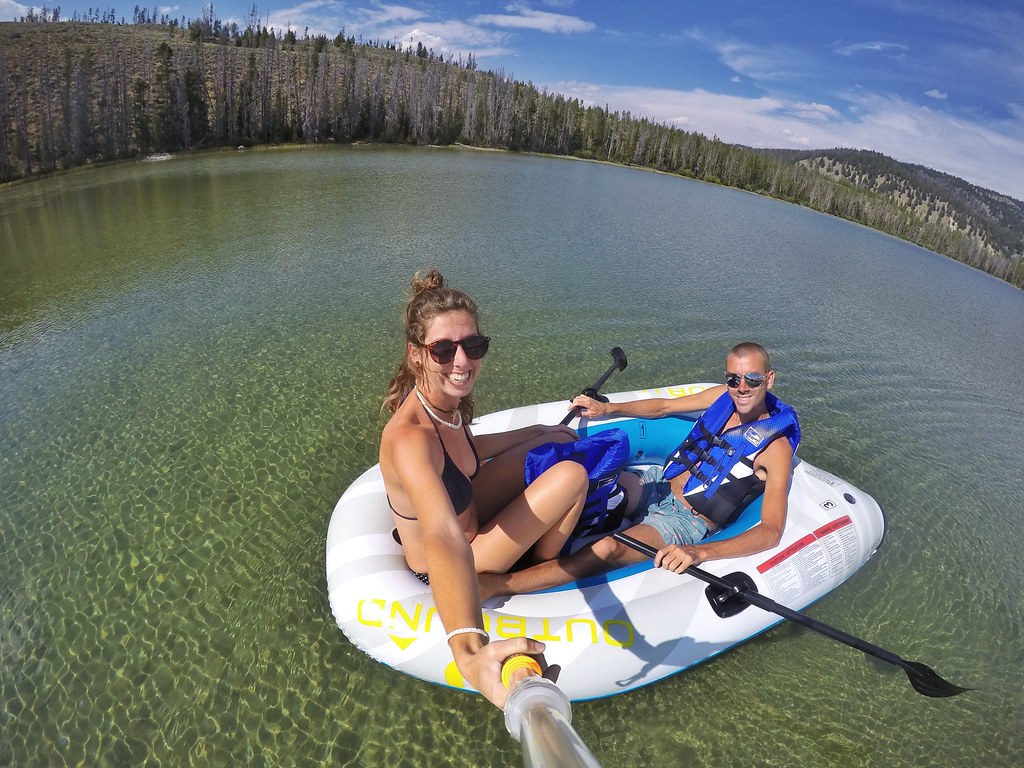 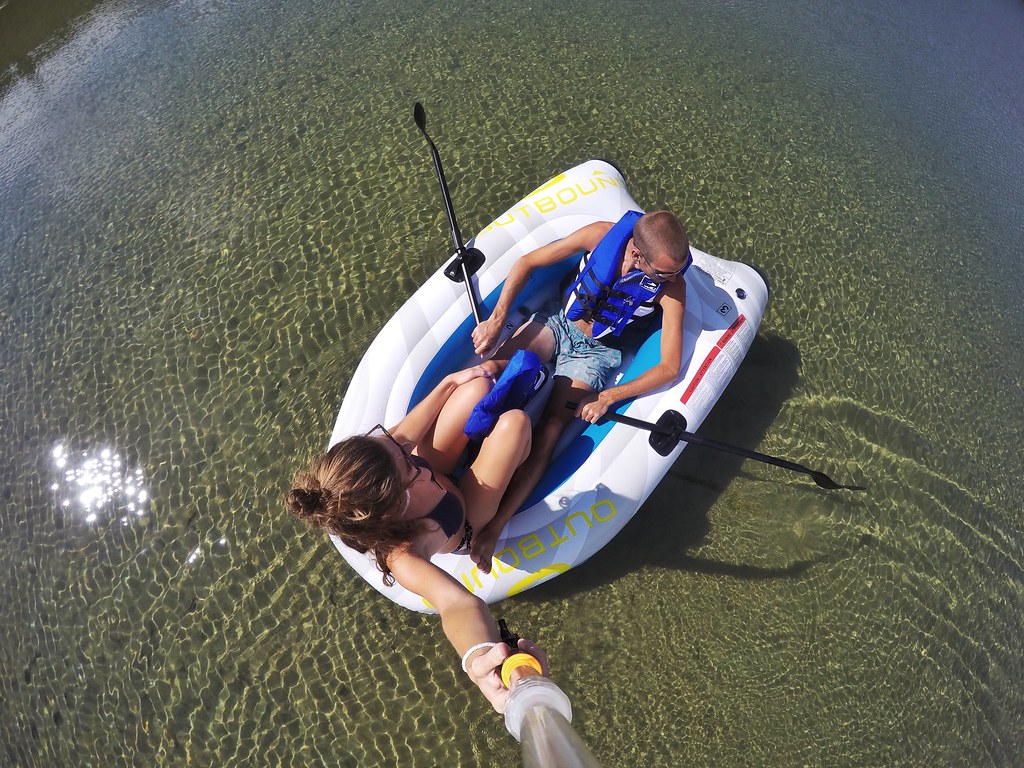 A short drive up the road was the huge Redfish Lake. A white sand beach was empty of people in the late afternoon and the incredibly clear, blue, waters made it look like we were in the tropics, the temperature of the water was very un-tropical but we felt nice and zingy after a brief dip. 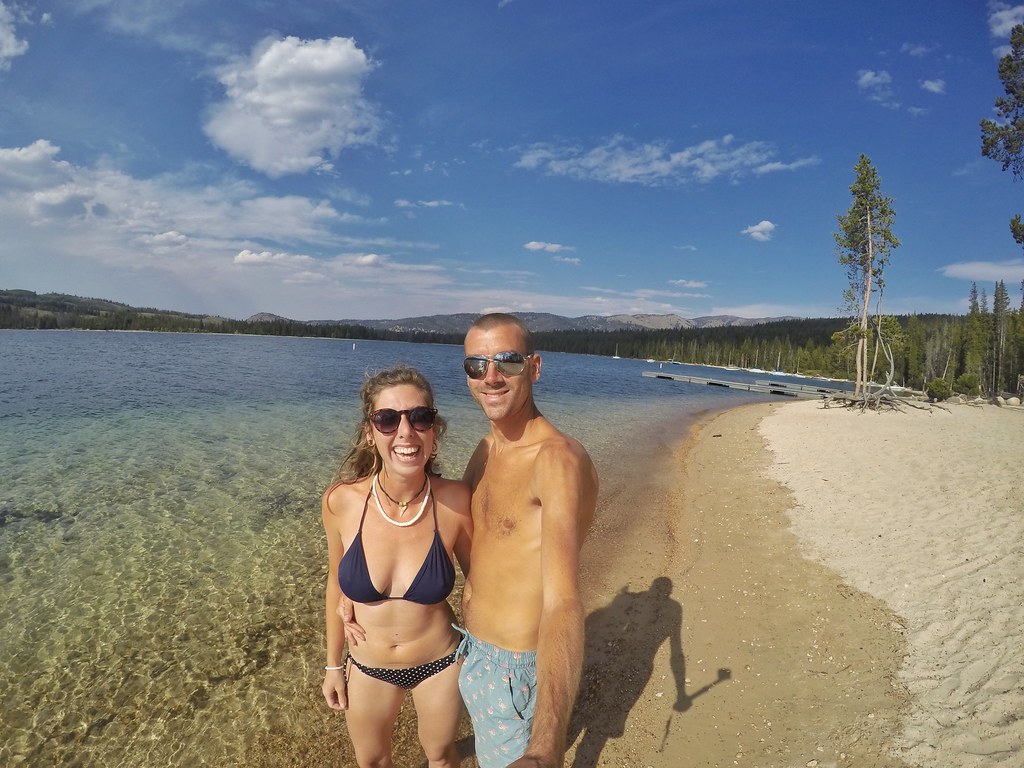 There were lots of free campspots in the national forest so we found a nice spot with a view of the sawtooth mountains in the distance. The only downfall was it was a dust-pit so sitting outside wasn’t very pleasant. The weather was fairly cloudy the next day but we did a hike up Boulder Creek to get a panoramic view of the sawtooth mountains and redfish lake. We didn’t pass a single soul on the trail and really felt like we’d come to a true wilderness area. We certainly worked up quite a sweat climbing up the dusty hill and the weather really cooled down with wind causing a dust storm so the idea of another hot springs sounded very appealing. There were two near us so we checked out one alongside a creek. It was a man made pool out of rocks and gravel and perfectly rounded. The pool wasn’t exactly hot, it was just warm, which I was fine with but Craig had childhood memory’s of second-hand baths after his brothers. It was also quite murky as its probably not used much so algae from the rocks was being disturbed every time we moved. Craig really likes ultra hot pools whereas I prefer them cooler but I agreed to try some other hot springs so we drove off in our towels and found some pretty unusual springs. It can only be described as a cauldron. A big round cauldron steaming with hot mineral water as appose to the eye of a frog, the feathers of a Raven and the paw of a mouse (I have no idea what a witch would use but I’d imagine these items would come in handy for a potion). 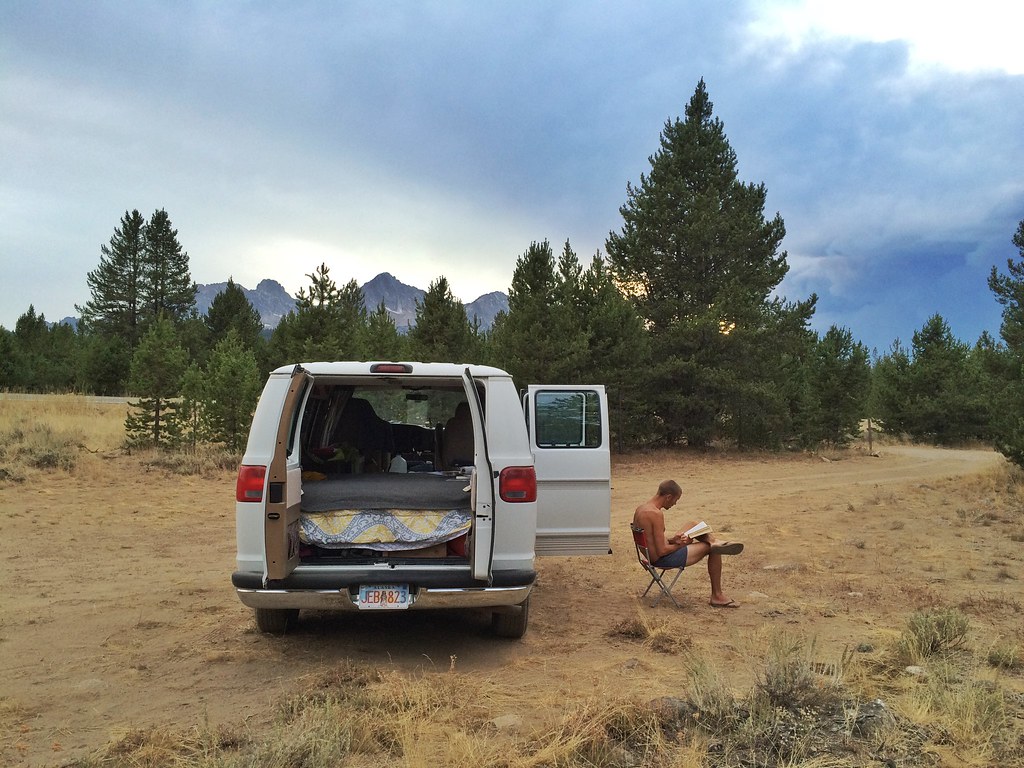 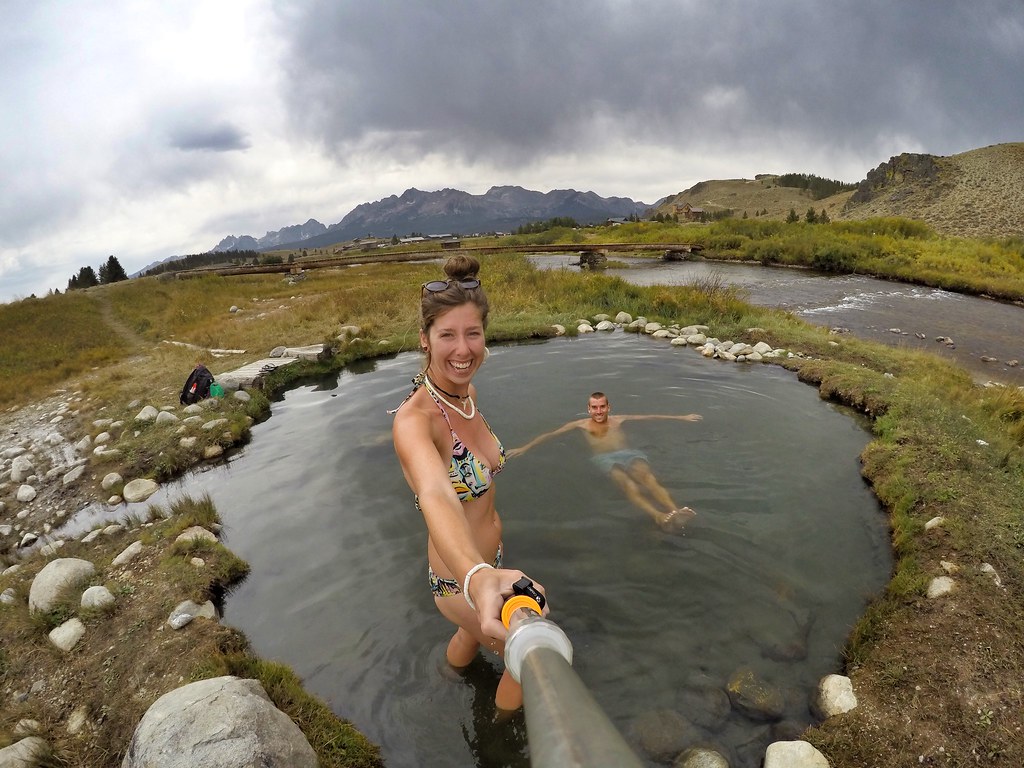 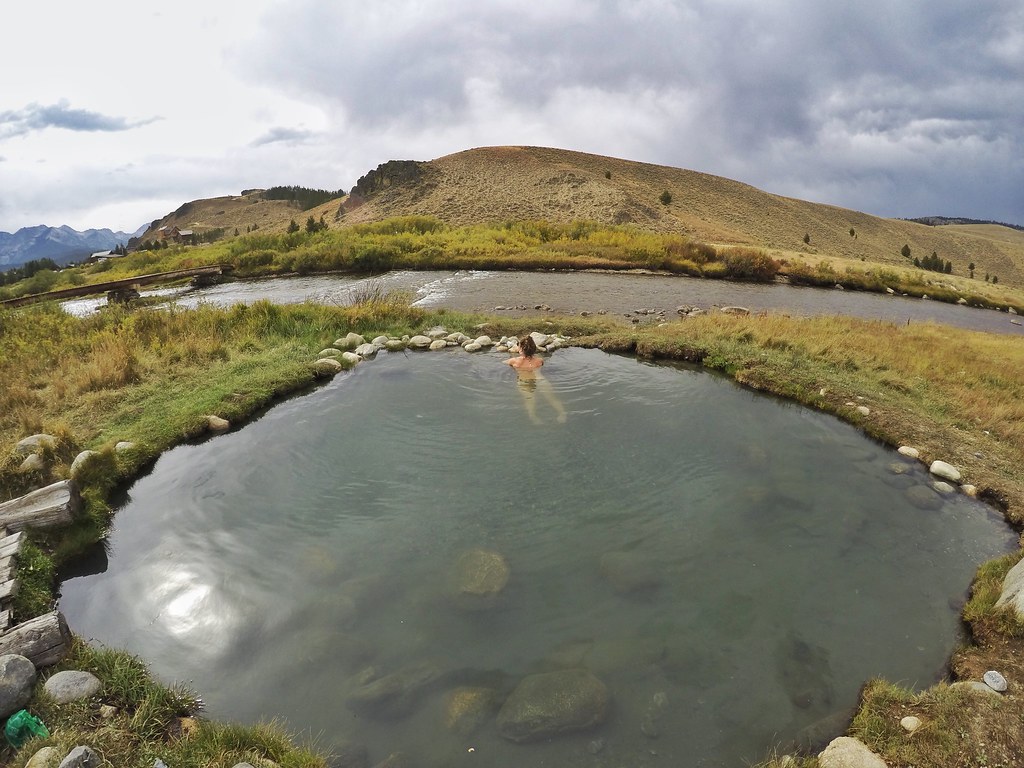 The cauldron was besides the river and a pipe was leading directly into it with water hot enough to boil an egg. Craig confidently went to climb into the pool and retreated at double the speed “hot enough for you Craig?” I said smugly. He moved the pipe away from the tub and began ferrying buckets of cold river water into the tub. Ten buckets later and it was safe to enter without having our skin melted off. Craig was loving it, “ahh, now this is a hot spring!!” while I winced and dipped my toes in. It took a while to get my body used for the heat but I managed to fully submerge and then declared that I didn’t like it. It was far too hot for me, plus it smelt worse than sulphur, it smelt like a pit loo so I wondered along the river and submerged into a warm rock pool. 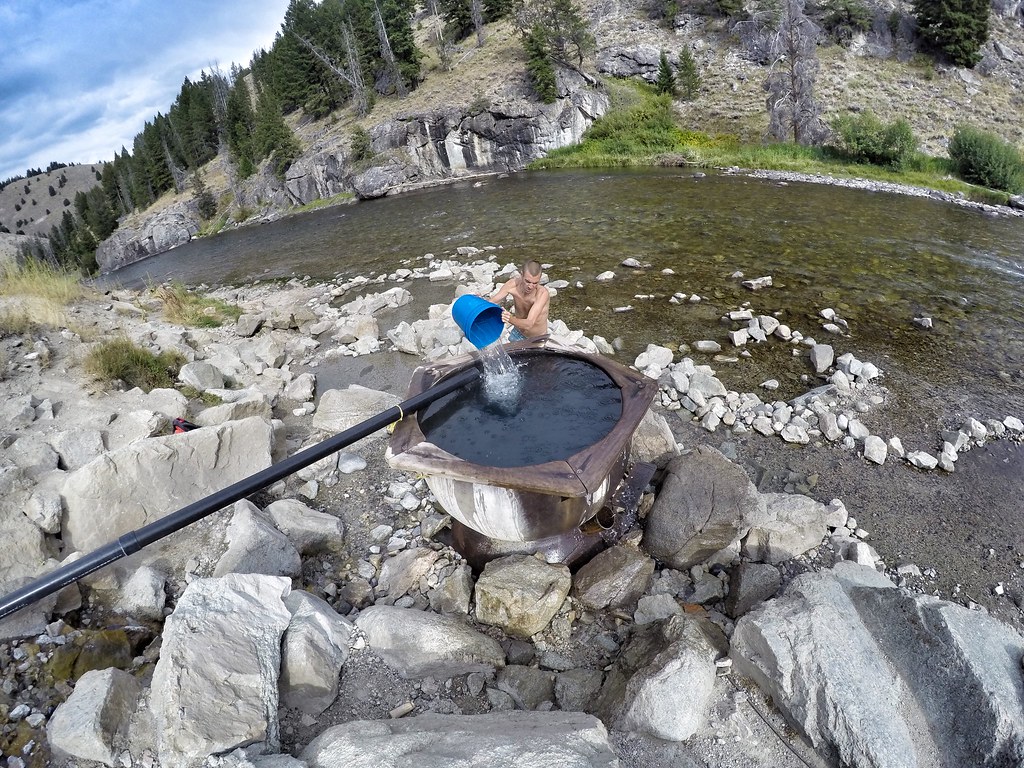 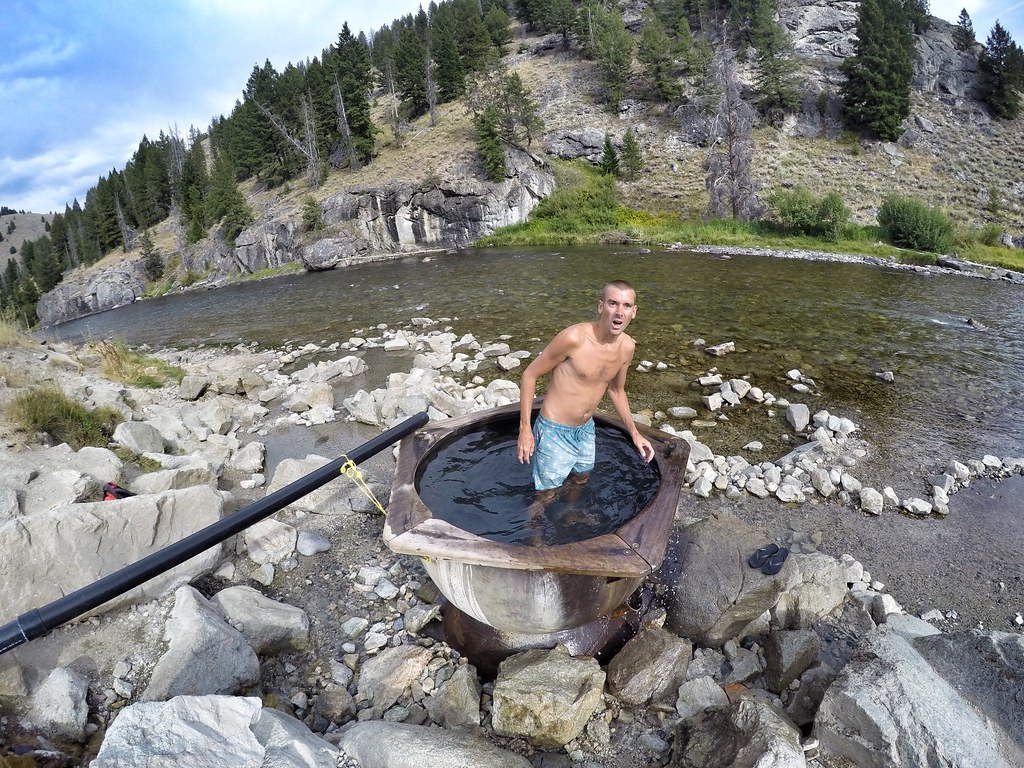 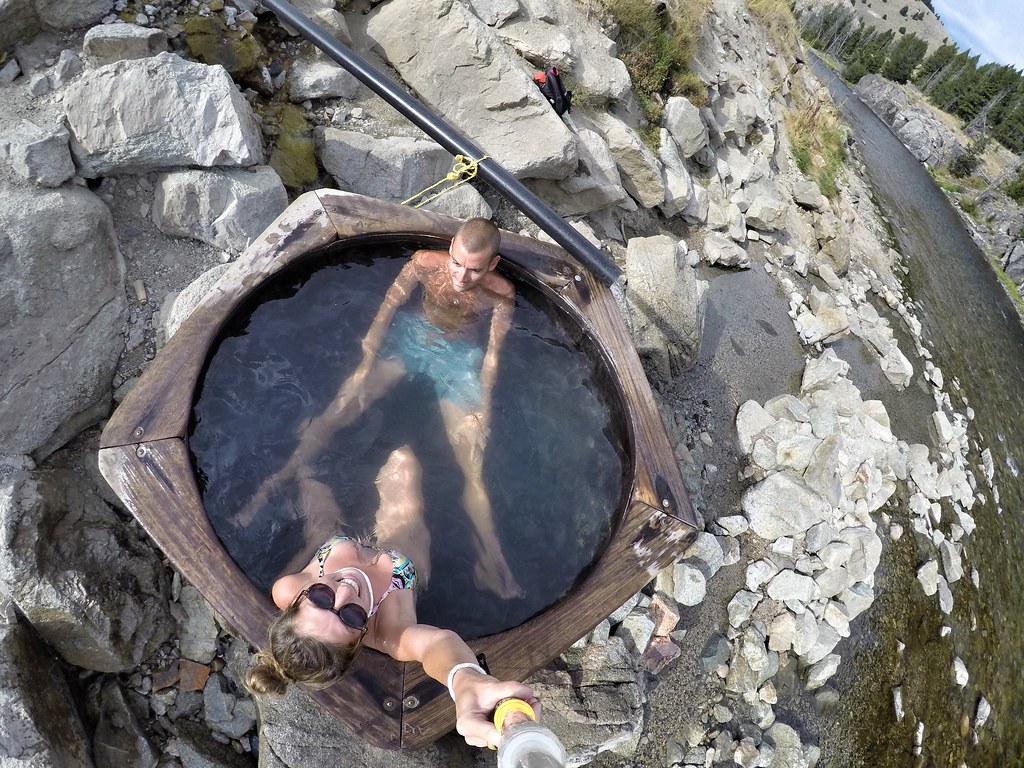 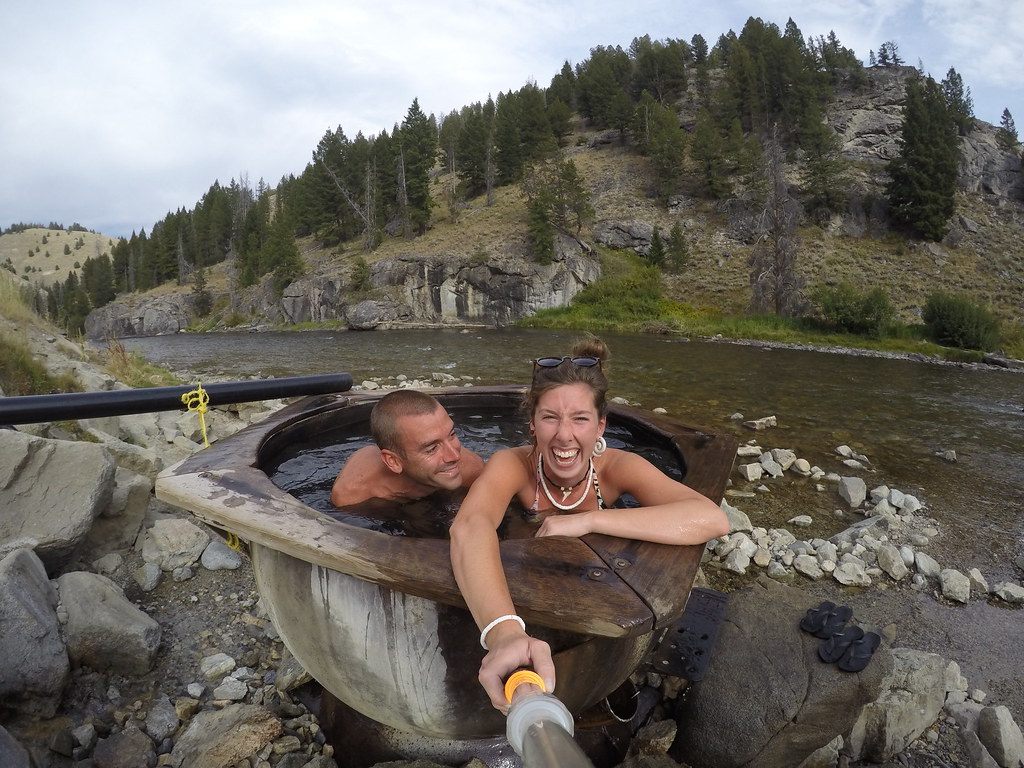 While Craig can spend hours soaking till he’s a raisin I get bored quickly but I found a way to preoccupy myself by finding black pebbles and writing Idaho in the gravel floor of the pool. I later found a GoPro video that Craig had secretly made of me while he was in the tub; he was whispering a documentary like he was David Attenborough and remarking on my ability to keep myself entertained in the baby pool. Bastard. He also started standing up in the cauldron and dancing Indian style, screwing the lightbulb, and singing a famous song from slum dog millionaire, but he changed the lyrics… “she-da-ho….who da ho Lauren?!” So I’d sit there perfecting my Idaho sign while Craig did a replay thinking I didn’t hear him the first time “she-da-hoooo….who da ho Lauren?…..Lauren! Your supposed to sing I-Da-Ho” thank god no one was around to hear this awkward song! 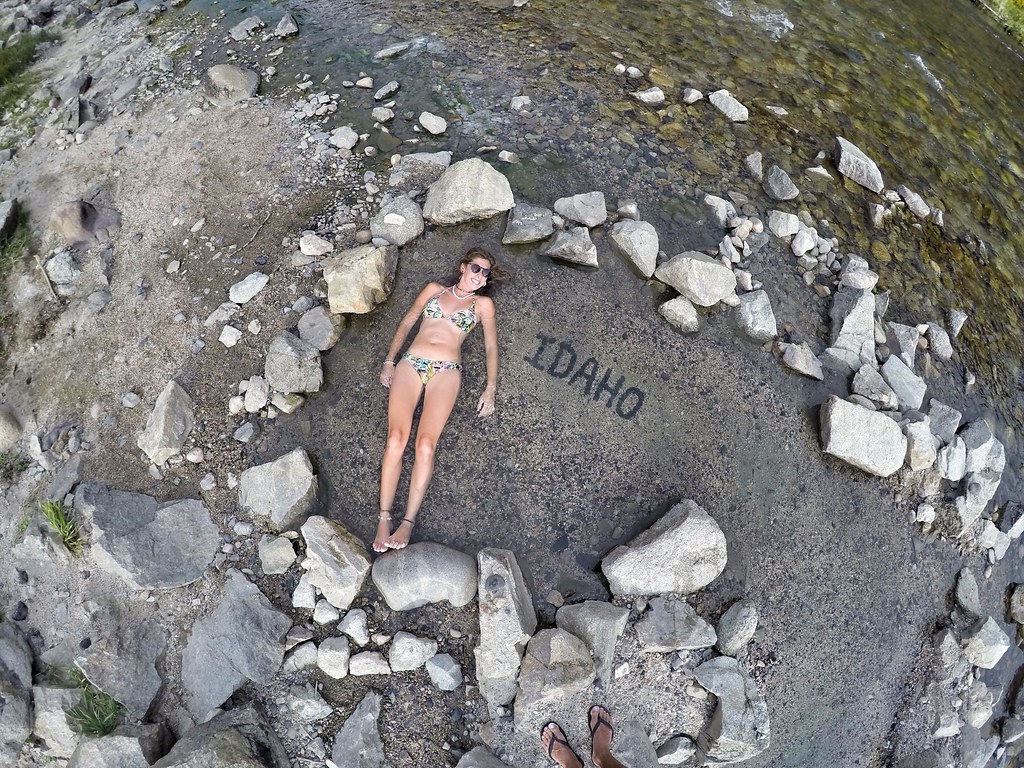 We loved the pools so much that we decided to hang around and go back at night time. I laid in my shallow ‘baby’ pool while Craig cooked in the cauldron. It took a while for the sky to become pitch black and the stars gradually popped out. It was a little scary actually as the river was loud so I kept calling out to check Craig hadn’t fallen asleep and drowned – come to think of it he never checked on me! It was always a painful response though with the noisy river nearby:

“I CANT HEAR YOU”

“WHAT?! Try speaking towards me not to the sky!”

I kept thinking a mountain lion or wolf was going to creep up on me so eventually Craig came and joined me in my pool and we both admired the incredible stars. This area has the clearest sky in the continental USA, so we were treated to one hell of a view. The Milky Way was visible and I suddenly saw what I thought was my first ever shooting star. It was actually a really bright, thick smear that vanished in a split second and Craig was well pissed off that he missed it. I tried to make him feel better “well I’m not 100% sure that it was a shooting st…” But before I could finish my sentence he butted in “WOW DID YOU SEE THAT SHOOTING STAR!! WAHOOOO, that was like the best one ever!!” Of course I missed it but he spent the next ten minutes gloating about the brightness of it and how it was the best one he’d ever seen. Luckily we both saw a few more and it was rather magical.