I browsed over our USA map searching for a scenic route from Flathead Lake, Montana to Yellowstone National Park in Wyoming. Their not far from one another but I couldn’t help but spot a green blob on the map called ‘Sawtooth Wilderness’ way south in Idaho. I was envisioning mountain peaks with edges spiky like the teeth of a saw, as you’d hope with a name like that! Maybe I was being a bit too presumptuous but I told Craig my intended plan, we could head south, then see Craters of the Moon and move east into Wyoming, he was keen so we hit the road.

On the route south we stopped at the National Bison Range. It’s a huge fenced off area home to your typical American wild animals. There were two routes to drive around the range and it was a bit like an African Safari; the animals were wild but couldn’t escape. I do wonder whether they enjoy it there, separated from the outside world, safe from hunters but not free to roam wherever they please. We certainly enjoyed our visit there though and saw lots of elk knee deep in the river. They were dipping their heads underwater and coming back out with a mouthful of algae. The bull elks looked very handsome with huge racks and the park had put good use to these racks that naturally drop off every year after the rut by piling them up on a wooden pole to look like a hay pile. 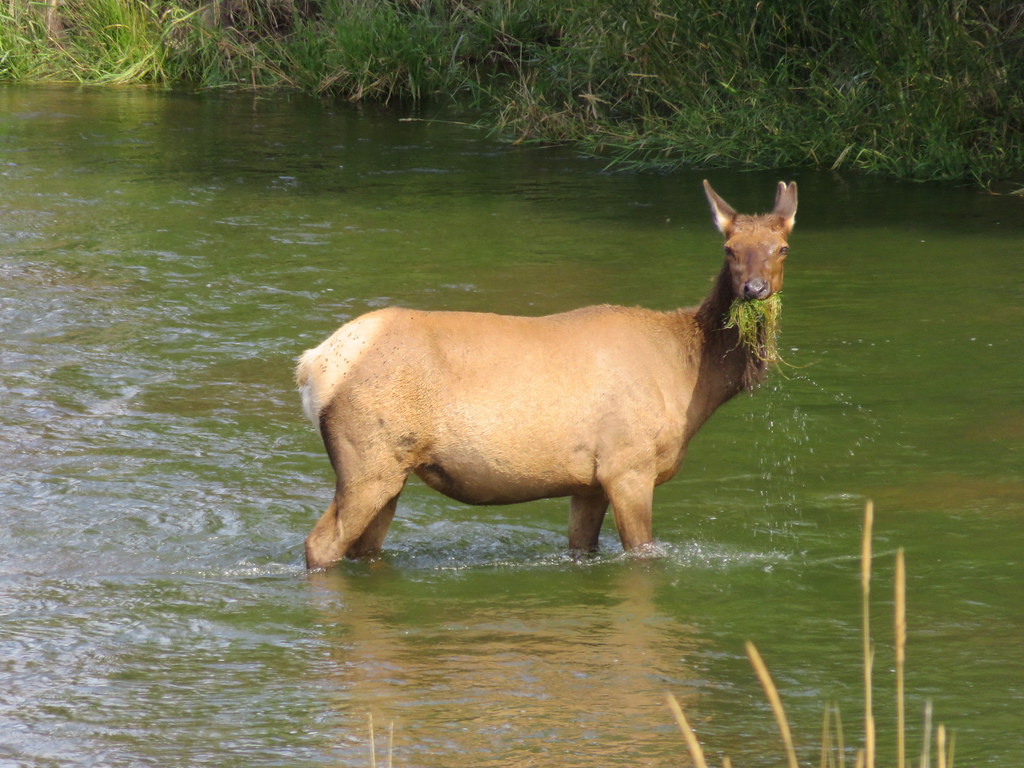 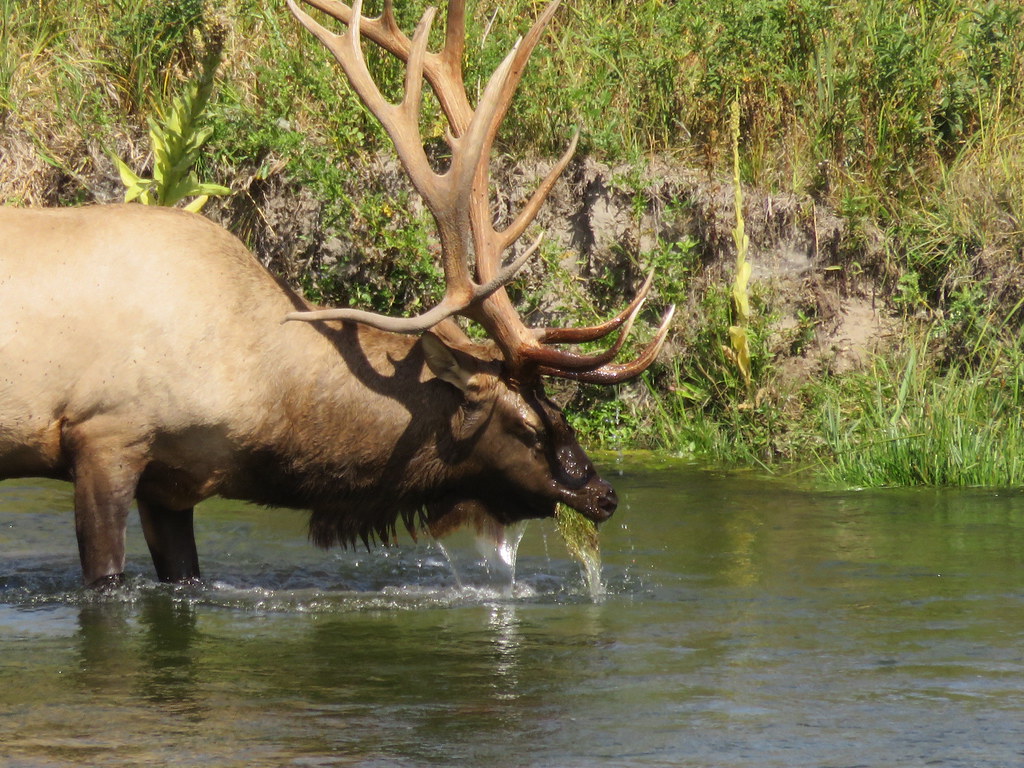 A kilometre down the gravel road we had a herd of bison walk past us. There was even a cute fluffy baby bison amongst the giant flat faced beasts. A few bison crossed the road right behind us too which was rather exciting. One animal we’ve never seen before was a Pronghorn Antelope so we spent a while admiring them. They looked more like African animals but I believe they are native to North America but most live in conservations now. The male had short black antlers and all of them had the prettiest coats with neat white patterns on their beige fur. The patterns were so precise that they almost looked man made. Some had zebra style stripes while others had perfect squares on their sides like they were wearing a saddle. We thoroughly enjoyed the couple hours we spent there, it was a photographers delight and very peaceful with hardly any visitors. 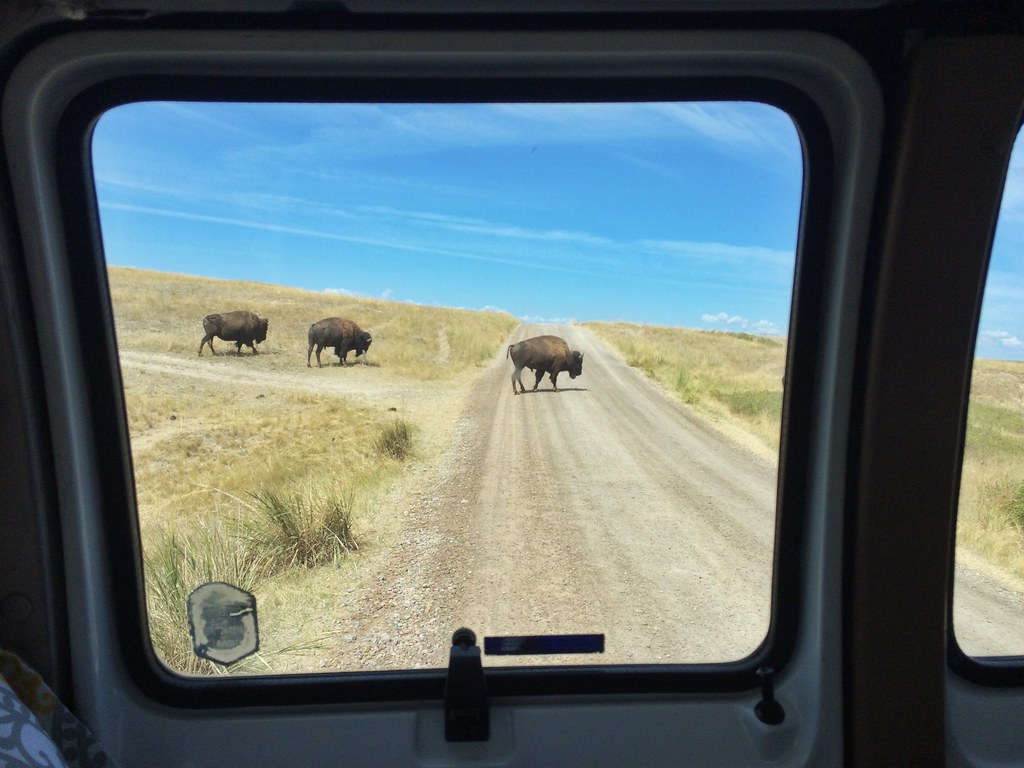 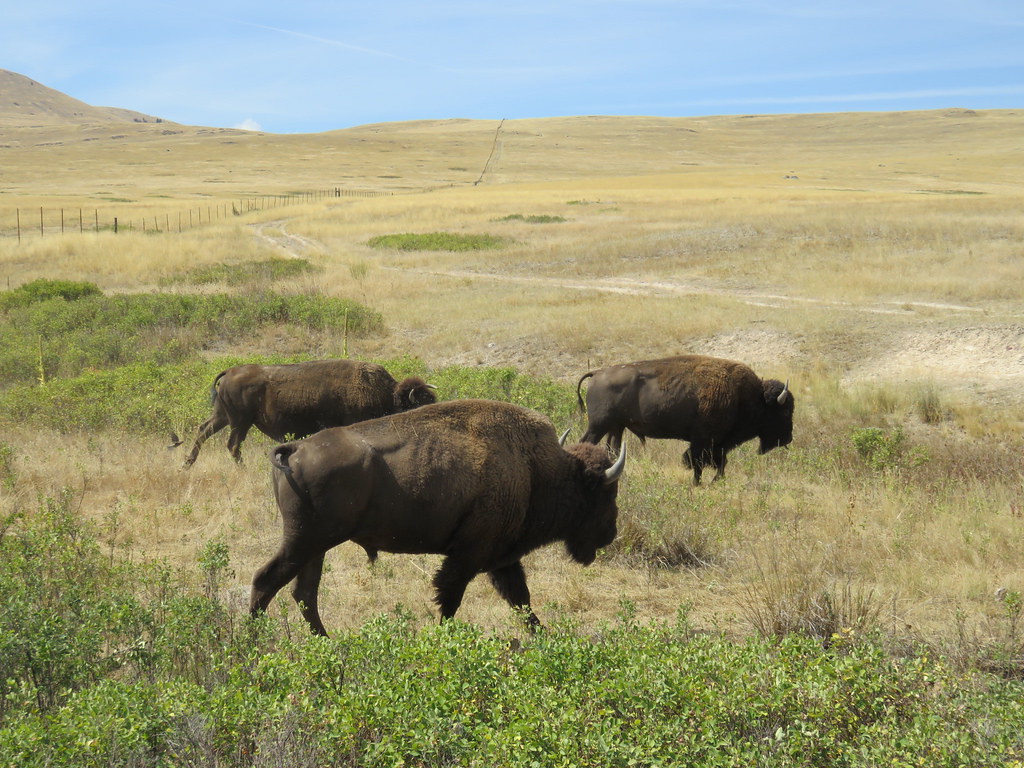 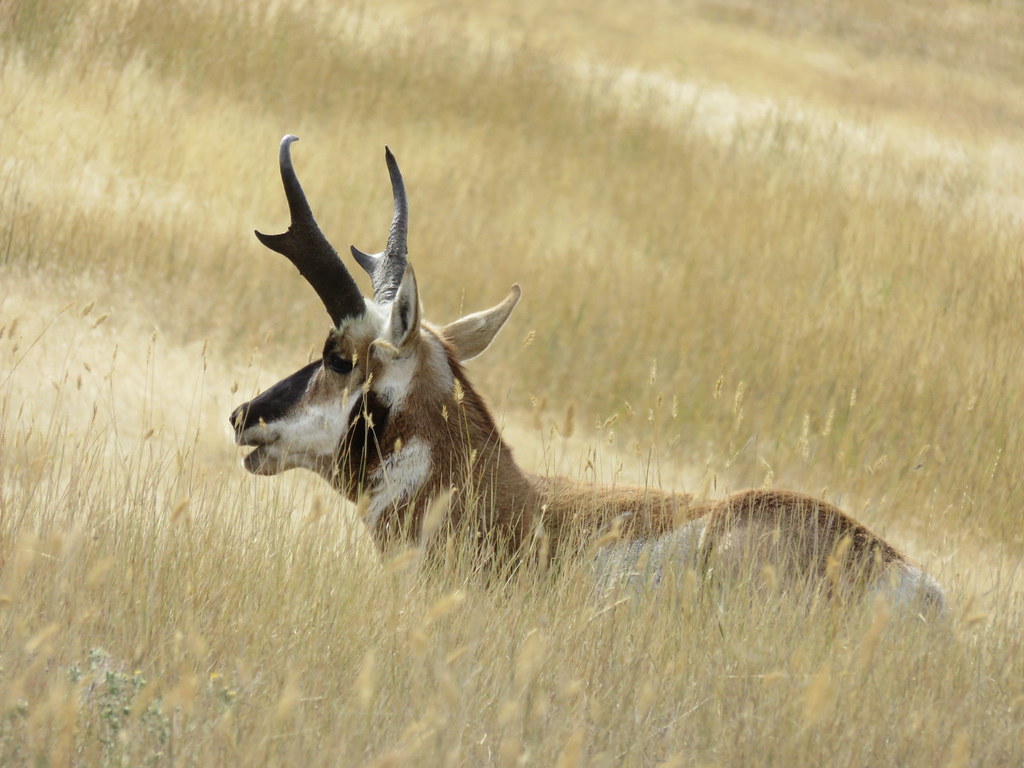 The drive south was extremely uneventful. We passed numerous towns and the ‘scenic’ route wasn’t quite living up to its name because it was such a wide valley so the mountains were far away. When we reached Hamilton we started reconsidering the route, there was a highway heading east from there but it was a very wild mountain road that’s lightly travelled and half dirt road. It sounded rather fabulous if we had a 4×4 but in the end we decided to stick with the original plan and I’m so happy we did. 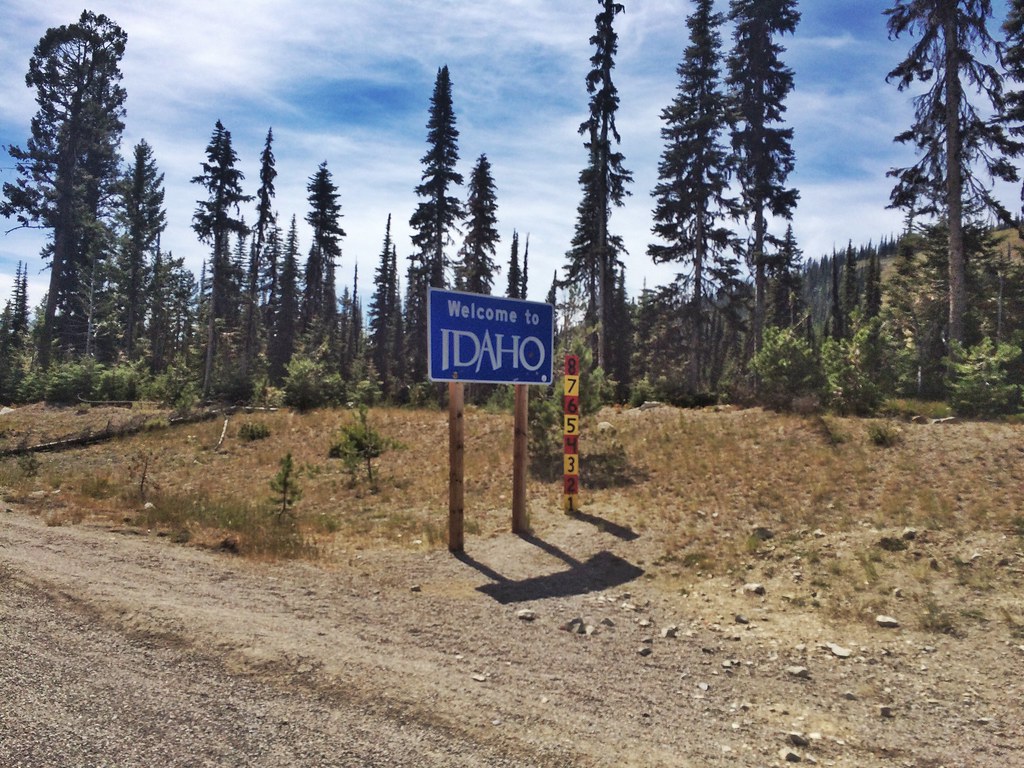 The next couple of villages we passed had some real rustic flat fronted buildings and vintage saloons and then we climbed the Lost Trail Pass. At the top of the pass we entered Idaho and the scenery became well worth the drive as we wound our way back down the mountain. Signs told drivers to ‘Say no to drugs and alcohol, lets go fishing instead!’ which I quite liked. We were driving along the Salmon River scenic byway and it sure was pretty. Near North Fork we turned up a national forest road and it said no camping allowed along the roadsides and we were ready to give up on that detour and turn back until we found a picnic area where we were allowed to camp for free. It was right by the river and we felt very content pulling up there for the rest of the day. The sun was beating down and the river was calm so we had a delightful dip. Craig even got our rubber tube out and paddled up the river and floated back down to me. He was swimming around and then suddenly said “LAUREN!! I could of died!!” I was confused and asked him what he was chatting about…”I was silent for 15 seconds and you didn’t even look up to check I hadn’t drowned” I’m normally a worrier but I just cracked up laughing. Craigs forever making a noise; singing, whistling or tapping so 15 whole seconds of silence should of really got me worried but I was enjoying the tranquility too much to notice haha. 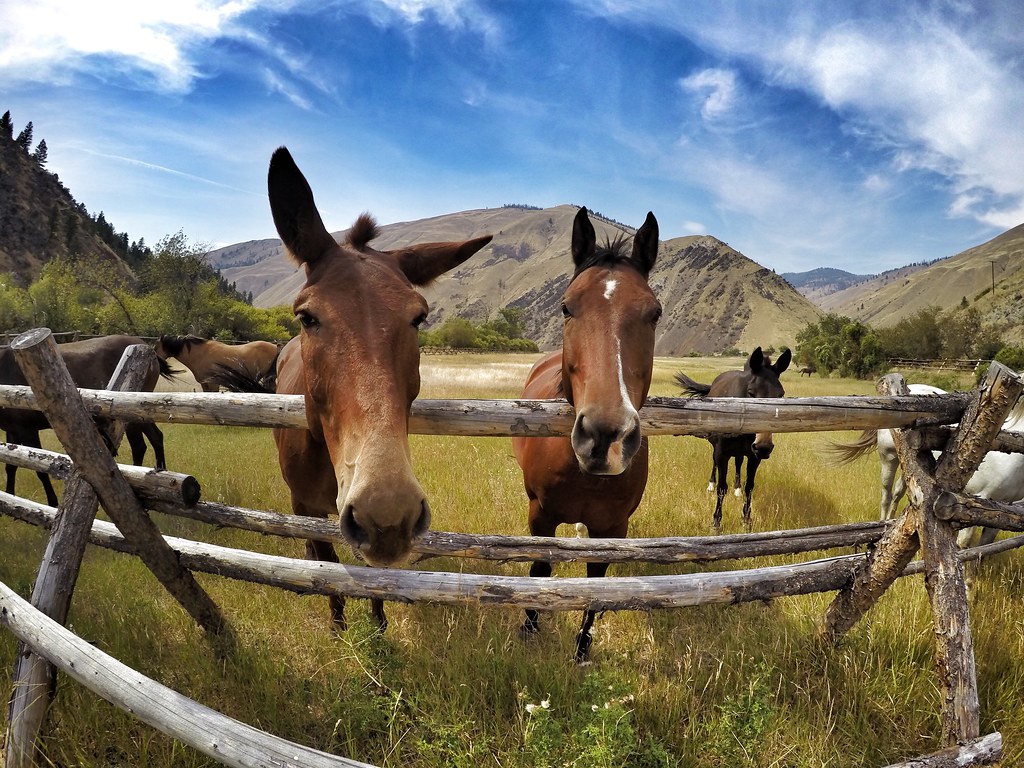 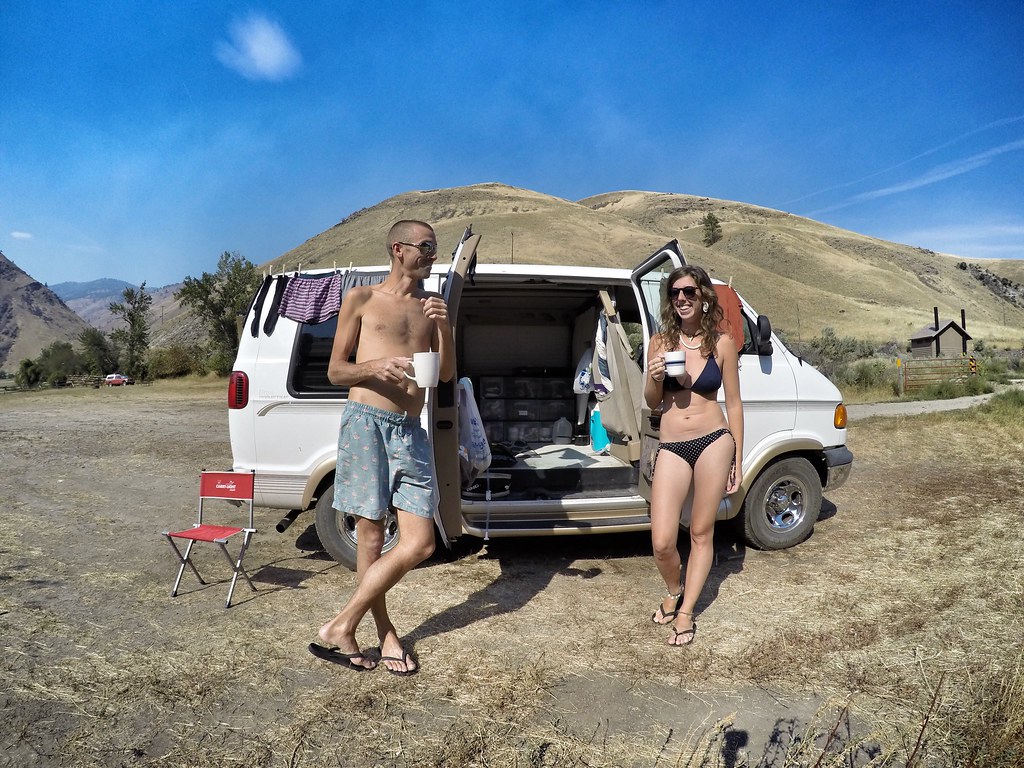 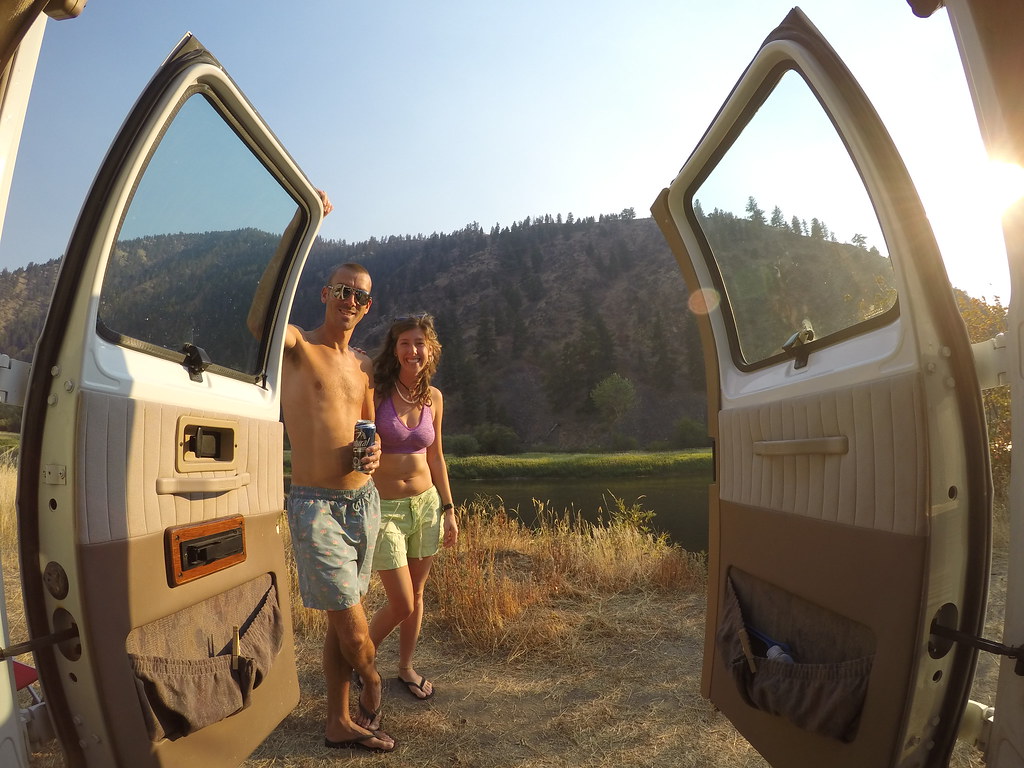 I was convinced I could hear rustling in the bushes by our river spot and on our second swim we saw the culprit right at our entry point; a two foot brown snake slithered back into the bushes and just stared at us from the dry shrubs. The next time Craig went down to the river he saw a baby snake too so she must have a nest there. The evening was pretty smokey as I’d expected because we are getting closer to the wildfires in Idaho but it wasn’t as bad as I expected. 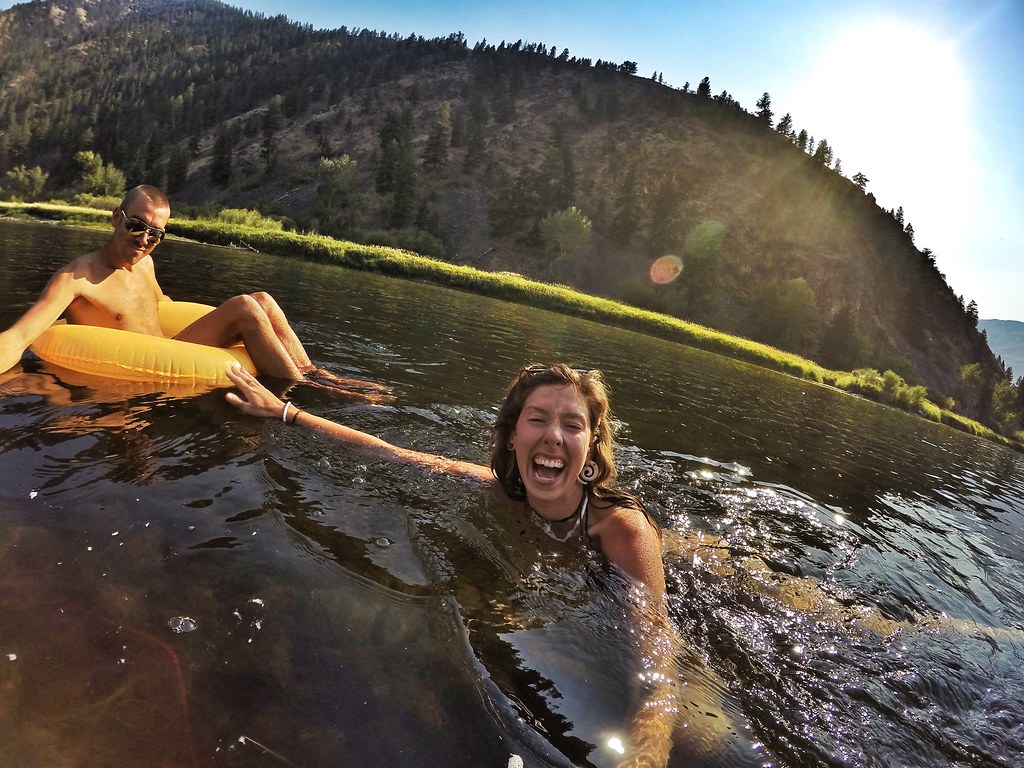 The next day we continued the beautiful roadtrip. The roads were a roadtrippers dream; hardly any other cars, no trucks, no tour buses and flat as a pancake as we wiggled alongside the clear Salmon river. We went through areas with big red rock walls, and sections where hoodoo rock formations balanced atop hills. We pulled over and tried to scale one but fell down the sandy hill and got stabbed by cacti. We really felt like we were in a high desert, maybe we were, as the surroundings were all very dry with arid hill and the odd tree. There was a scattering of dead skunks on the highway and ballooning deer on the verge being swarmed by flies. A few houses dotted the remote area and big ranches were pumping out water to give themselves and their animals some lush grass. Occasionally the road would narrow and we cruised through gorges which was fun. 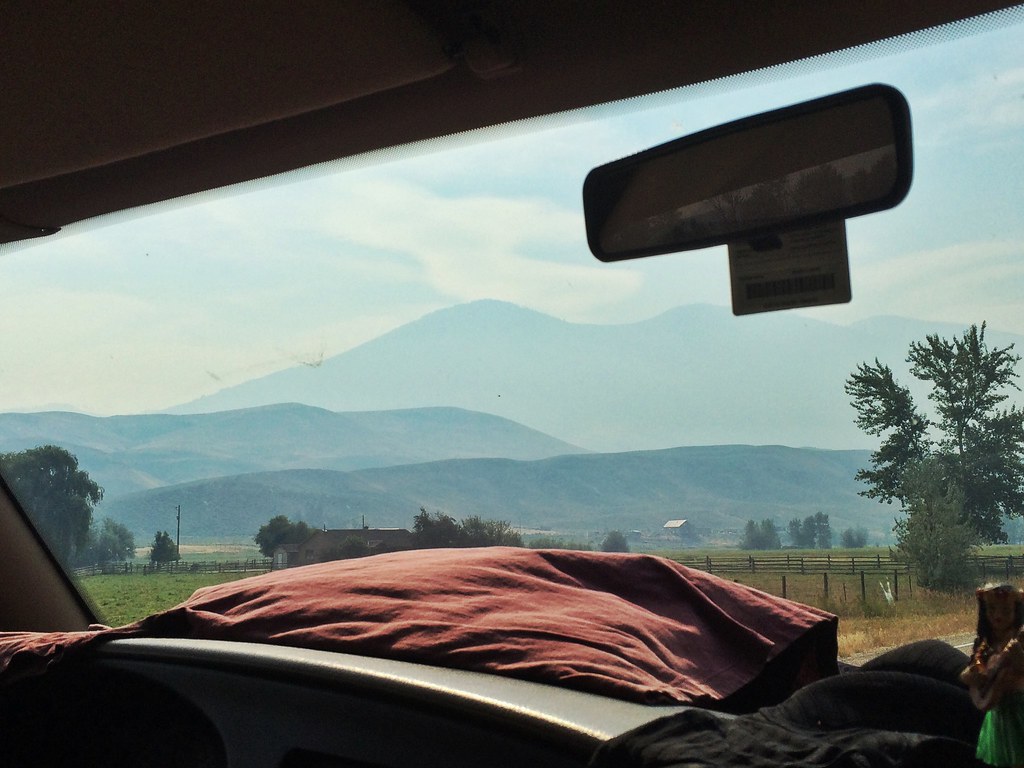 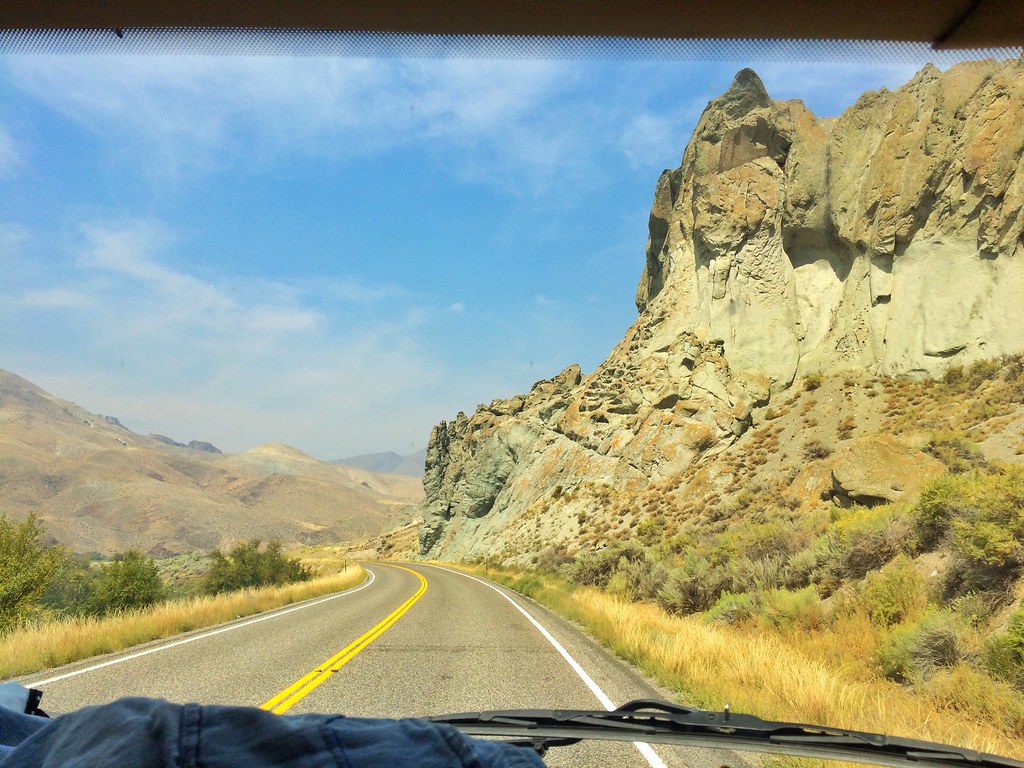 We took a random turn up to Bayhorse Ghost Town which used to be a mining town. The road was extremely scenic through a rocky valley where the walls were orange and jagged. There was only a handful of buildings there, our favourite of which was a dark wooden building with a traditional flat front and wonky balcony. There was a large ore crushing building from the mine which was built down the mountainside to use gravity to crush the rocks for minerals. It was all a nice red colour with old rusty tools and beaten cars at the bottom. 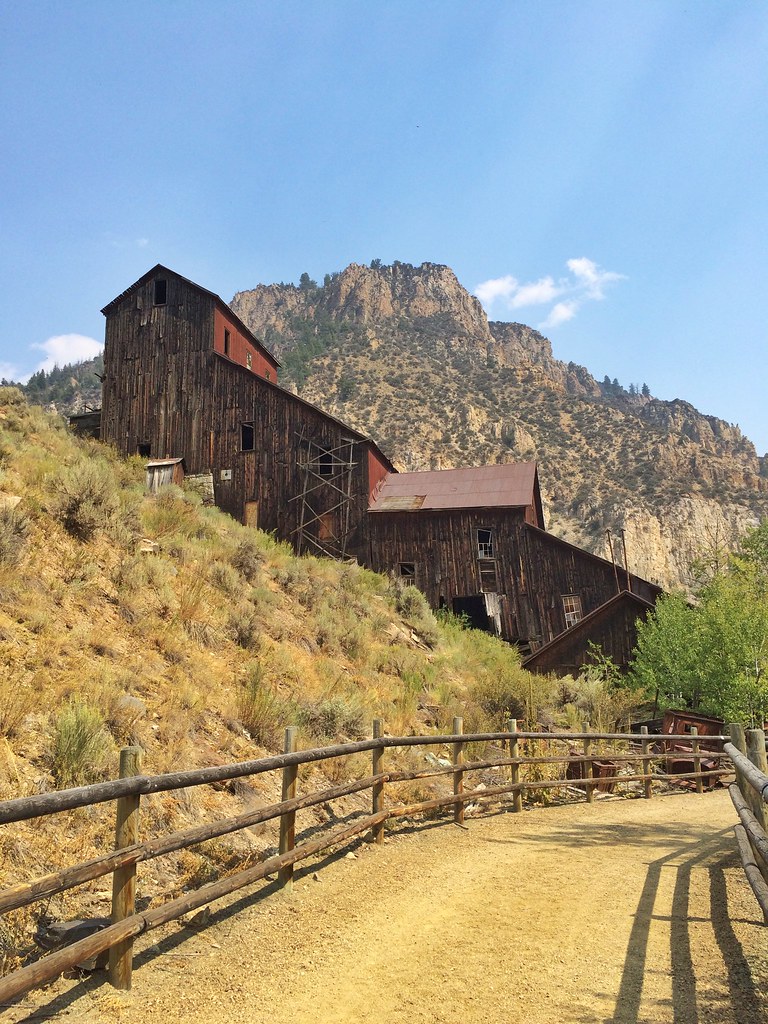 We were delighted to find lots of free camping spots alongside the salmon river, some right by actual campgrounds which seemed crazy. We felt like we were the only people in the area as we pulled up by a fire pit for the night. We enjoyed a nice roaring fire and marshmallows which we’d been deprived of for over a month after Canada’s parks required a fee to have a fire and we couldn’t justify $10 to toast a mallow. A few deer wondered past our camp and the sun slowly dipped behind the valley. Smoke from the wildfires built up around this time in the evening but it made the sunset look rather beautiful. We felt like we were back in Asia with thick smoggy sunsets that stain the whole sky. There was no sign of the sawtooth mountains still but we we’re thoroughly enjoying the journey to them, what’s that phrase about the journey being better than the destination? I can’t be the judge of that yet but we’re having a blast in beautiful Idaho. 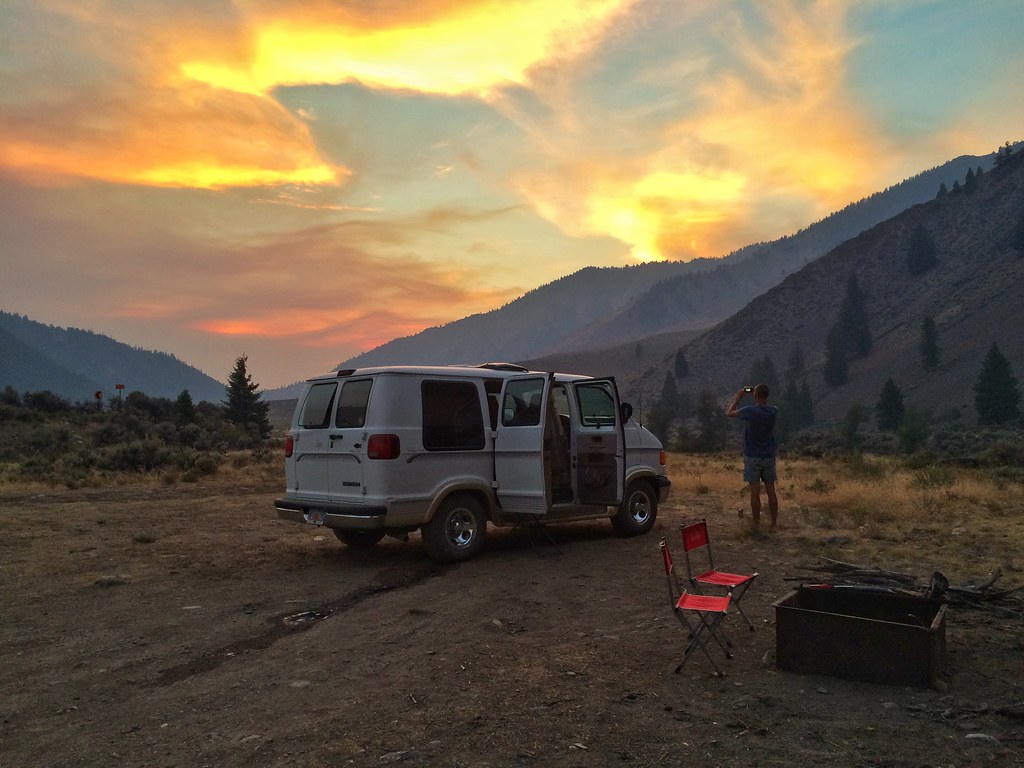 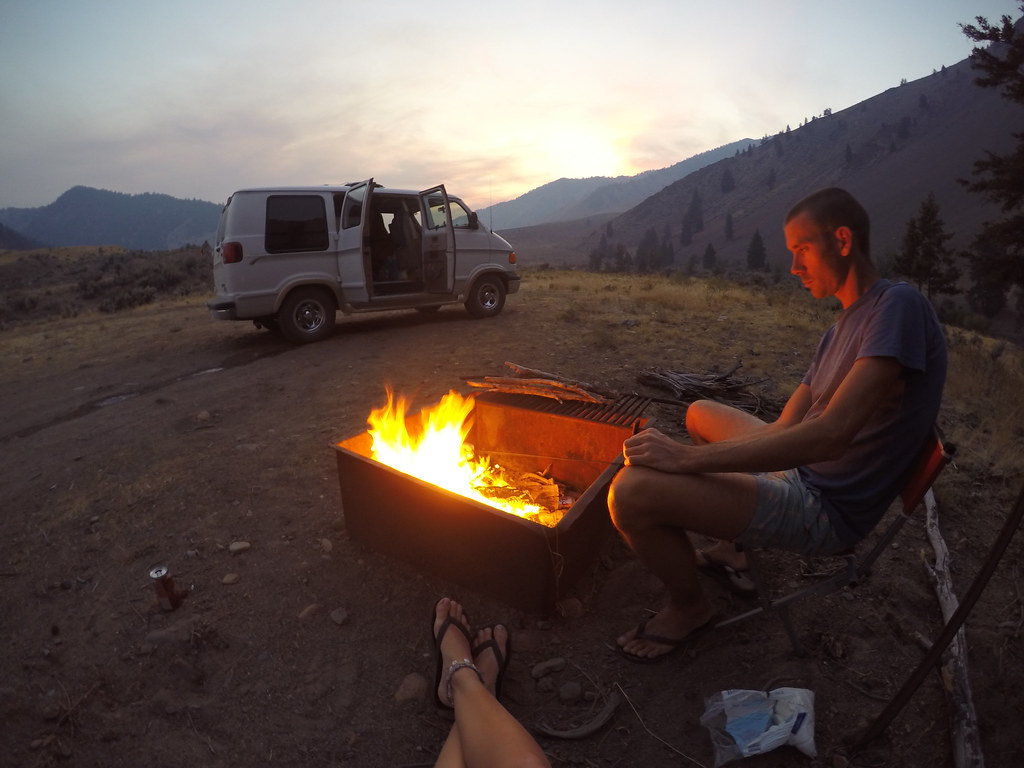