Every town we get to we’re either too early or too late for their summer rodeo. It’s something so America and we couldn’t possibly leave without seeing one. Thankfully I found out one was happening that very night in the small town of Polson, Montana. It wasn’t just any rodeo though, it was the Indian National Championships. Aka the dogs bollocks of all rodeos. 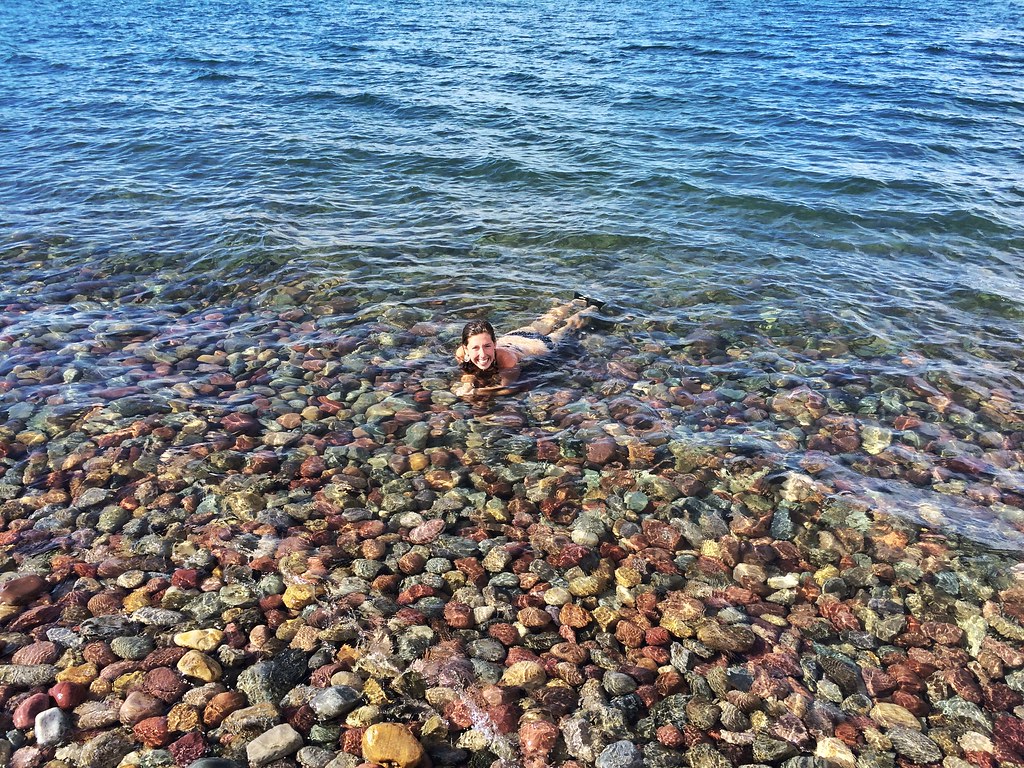 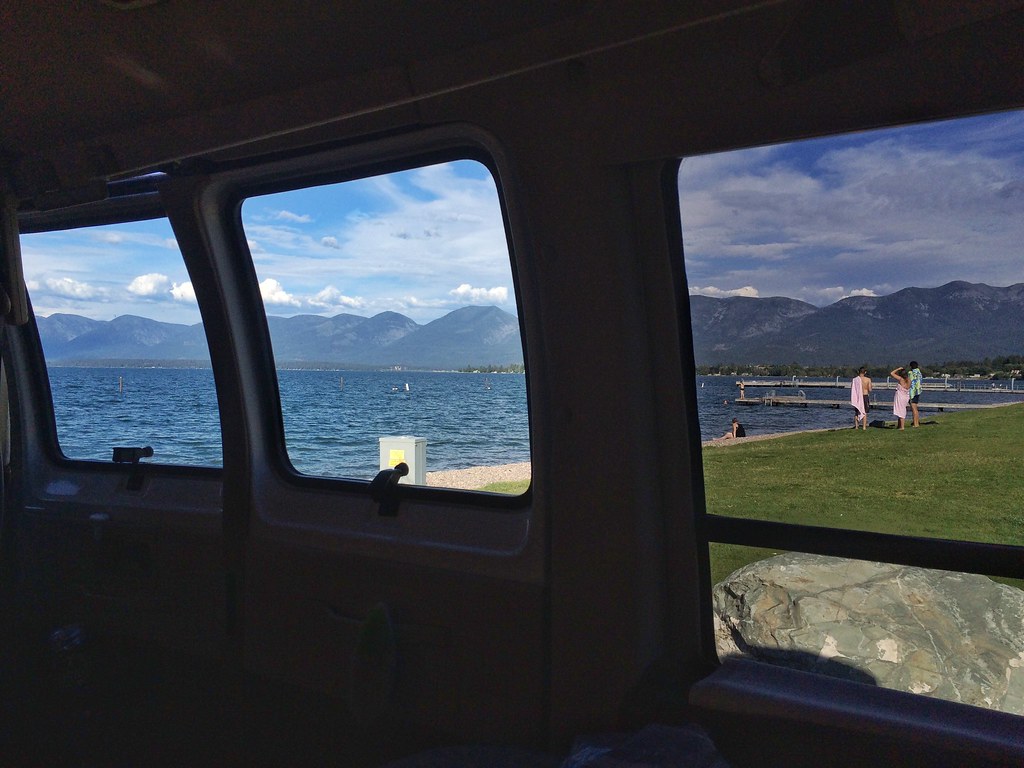 The town sits on the shores of the huge Flathead Lake so we spent the day basking in the sun and swimming in the clear waters. We arrived just in time for the start and picked a seat on the grand stand with a great view of the sandpit arena and craggy peaks as a perfect backdrop. 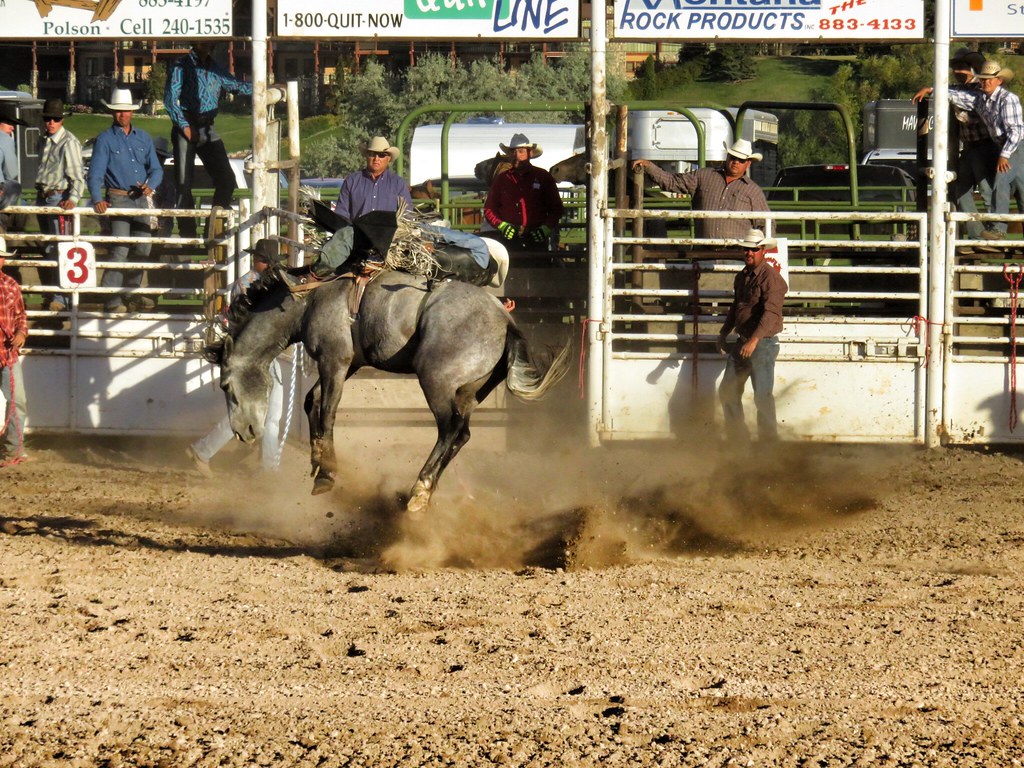 It wasn’t too busy which we liked, quite a locals vibe and I reckon we were the only foreign tourists there. The crowd really dressed the part and we were surrounded by cowboys and cowgirls. Native Indian kids were in the sweetest little cowboy outfits with neatly platted hair and genuine leather gear. Four men began doing a traditional song while beating a drum and basically making noises with their mouths like “oms” but it was surprisingly nice to listen too. Quite a contrast afterwards when the national anthem was sung mind you. They got straight into the excitement of the rodeo and before we knew it a gate was released and out came a cowboy riding a bucking horse bareback. Wowee. Us English folk haven’t seen anything like that in our lives. It was crazy! Some men would last the required 8 seconds or so while others fell right over the horses head. The two time world champion really showed up the other Cowboys as he was slung like a rag doll atop his grey horse. Bloody hell did that thing buck, all four legs were off the floor at times and it’s back was arching and still the cowboy held on. It was bucking so much that he struggled to get off safely and had to grab onto one of the three ‘safety cowboys’ I’ll call them, basically three men on horses who are there incase that happens and they’re in charge of directing the bucking horses out of the arena. 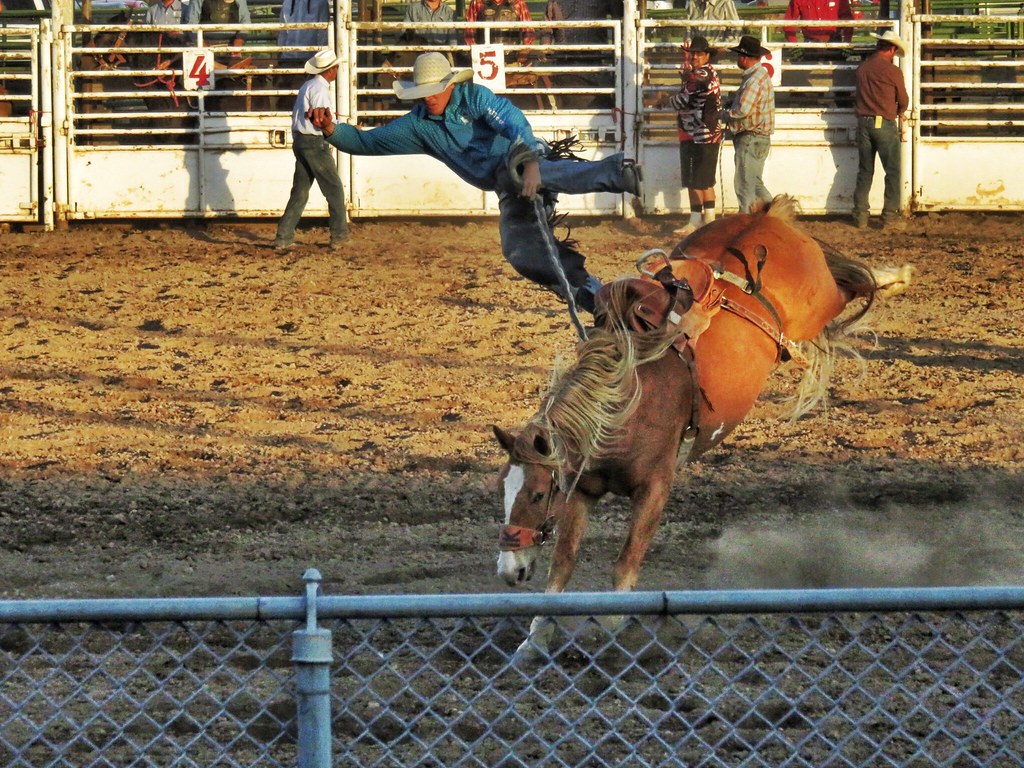 After that excitement there were a few events with calves. It started off with a cowgirl being let out the gate at the same time as a calf, they had to chase and lasso the animal. Once the rope was pulled around the neck they let go and the calf just ran free with the rope dangling. Next up the cowboys did the same thing but the rope was attached to their horse, so when the calf was roped the it would get quite a tug back as the horse put its brakes on. The cowboy would then jump off and use all his might to yank the calf up and down onto its side and then he’d grab a wire rope from his teeth and frantically wrap it around two or three of the calfs legs. The calf had to stay down for 6 seconds and they looked so sad and vulnerable on the floor. Some fought the ropes while others just lay there until they were released. Next up two Cowboys tried to corral a calf between them and then one man would just jump off his horse on top of the calf. I quite liked this one as most of the calves got away and I felt like standing up and shouting “FREEEEDOM” every time.

The final calf competition was two Cowboys let out at the same time as a calf again. One guy lassoed the calfs head while the other had to lasso it’s back legs. Not many Cowboys managed this intricate challenge but it was pretty brutal when it worked and the poor calf was tugged from both ends.It wasn’t very nice to see but that’s the Wild West, that’s how it’s been done for centuries so it was also interesting to see their techniques and boy were they good at it. Craig and I tried roping or lassoing in Canada and it’s quite the mastered skill. We really struggled with it and these guys and girls got the calf bang on perfect.

There was a ‘rodeo clown’ that filled in the gaps between competitions. He was actually pretty damn funny. He ripped the piss out of contestants and the crowd and he had us in stitches on a few occasions. He got the crowd to dance if they wanted to win a t-shirt and about 1% of the crowd gave it a go…and when they did the clown was laughing at their awkward moves and getting it played back on the big screen “what are you doing, swatting flies?!” so he could humiliate them!

One of the last events was the cowgirls riding around three barrels. They curved around the barrels so tightly and charged to the next one at such a speed it was hard to keep up. Their legs were just flinging around in the air as they rode the horse at lightning speed. 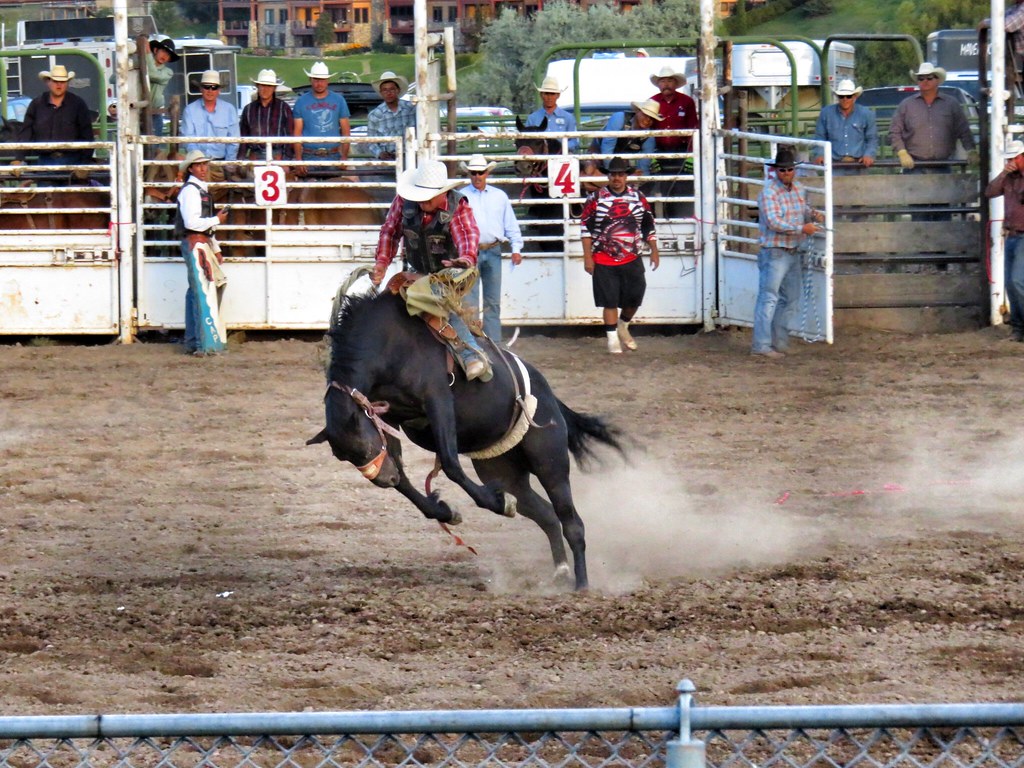 They saved the best till last though with the bull riding. Cowboy hats were swapped for helmets with face guards and two men were in charge of the raging bulls. They’d open the gates and the bull was bucking like mad before they’d even exited the gate. It was a lot more frantic and aggressive than the horses and the Cowboys didn’t spend long atop those bulls. When they were flung from its back the two men wearing colourful scarves or hankies round their waist pretty much saved the Cowboys lives by distracting the bull to avoid it stamping on him. It was a great night, we had so much fun watching the professionals showcasing their skills and we’re keeping our eyes peeled for anymore rodeos coming up on our drive south.