Our first full day in Montana started off very well. I opened the blinds of our van to see we were surrounded by cows. They were all grazing around us, it was like a novelty hotel or restaurant; eating lucky charms in bed while admiring cows in a natural environment. Maybe I’ll trademark that. 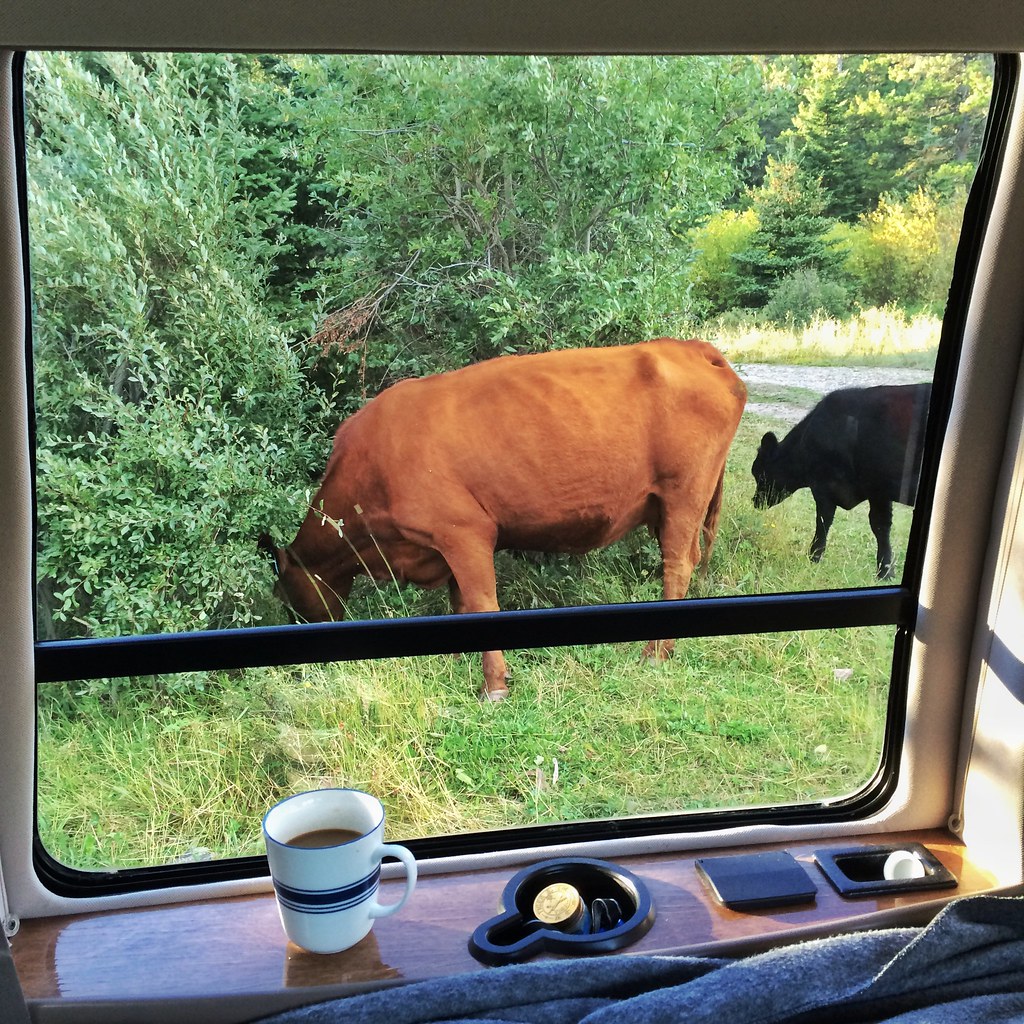 We drove south to re-enter Glacier National Park and drive the famous Going-to-the-sun road. It was super windy and there seemed to be dust in the air blocking the mountain views. We turned the radio on and were told there would be 70mph wind gusts and it’s pushing smoke from wildfires in Idaho this way. Bollocks!! We drove along the never ending shores of Saint Mary Lake where the wind was so strong that you could probably of surfed on it. Luckily we did have blue skies for the drive which twisted and turned with cliffs to our right and lake drop offs to the left. There were more uniquely shaped peaks around and before we knew it we’d reached the pass, what an easy climb. 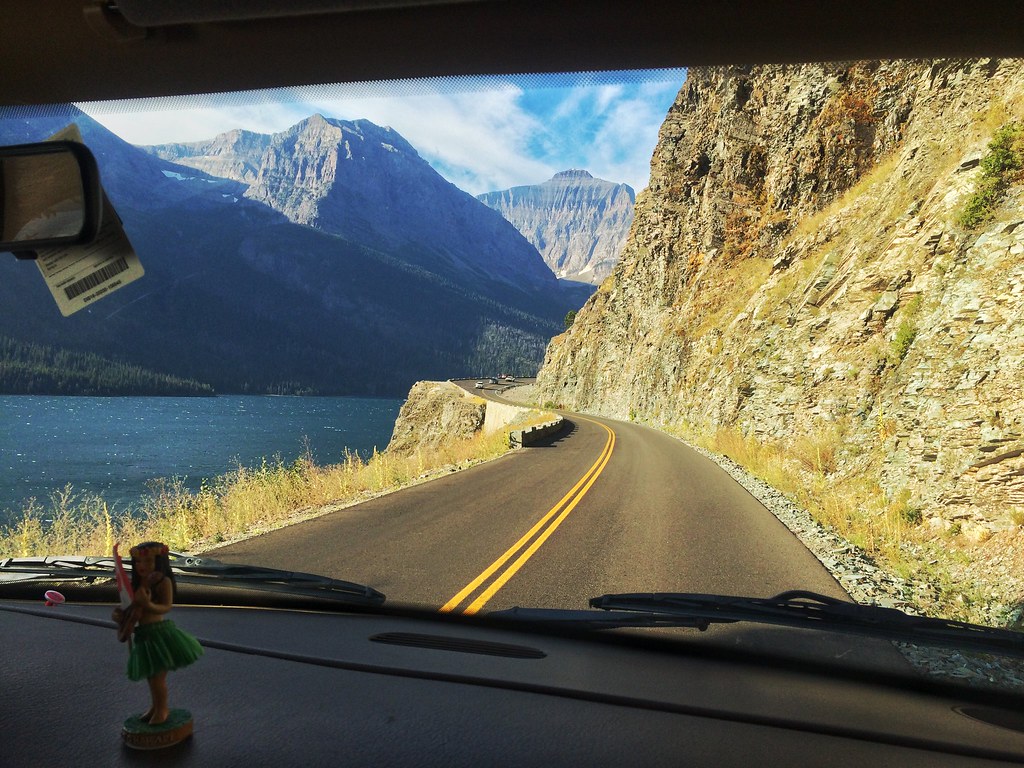 The carpark was almost full by 9am and we set off on the Hidden Lake Overlook trail, as did most other visitors. I can’t blame them though, it was an awesome hike; very easy with a gradual climb past vibrant meadows with bright yellow and pink flowers covering the fluorescent green grass. The imposing peak of Mount Clements dominated the scenery and stood high above us. 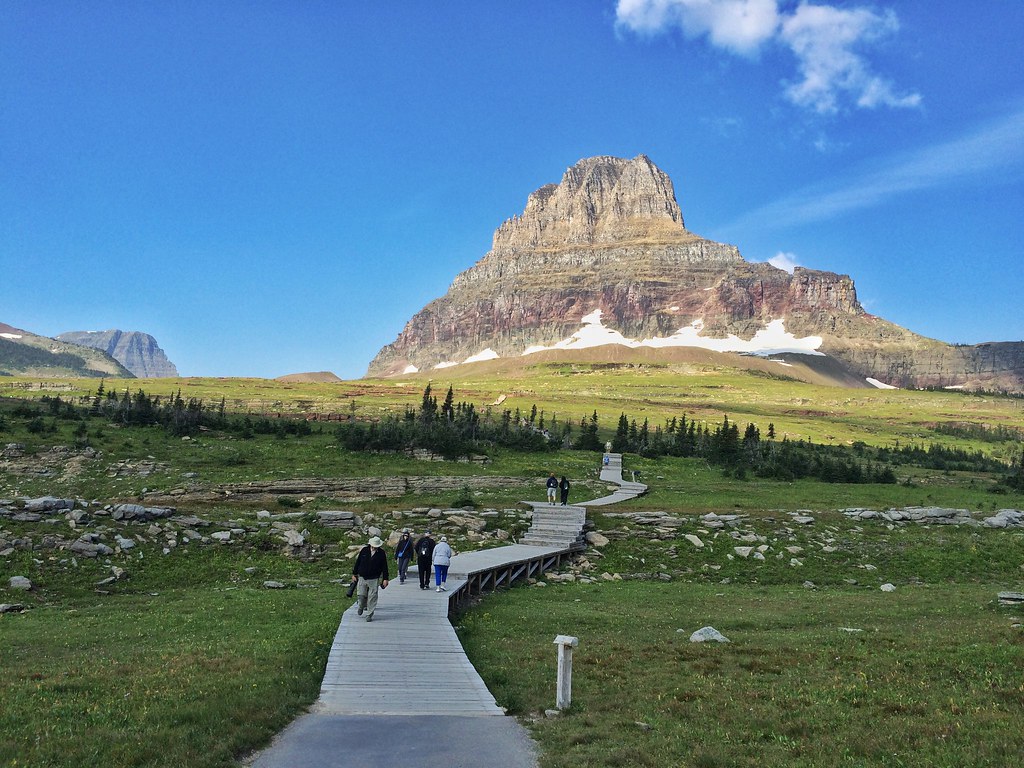 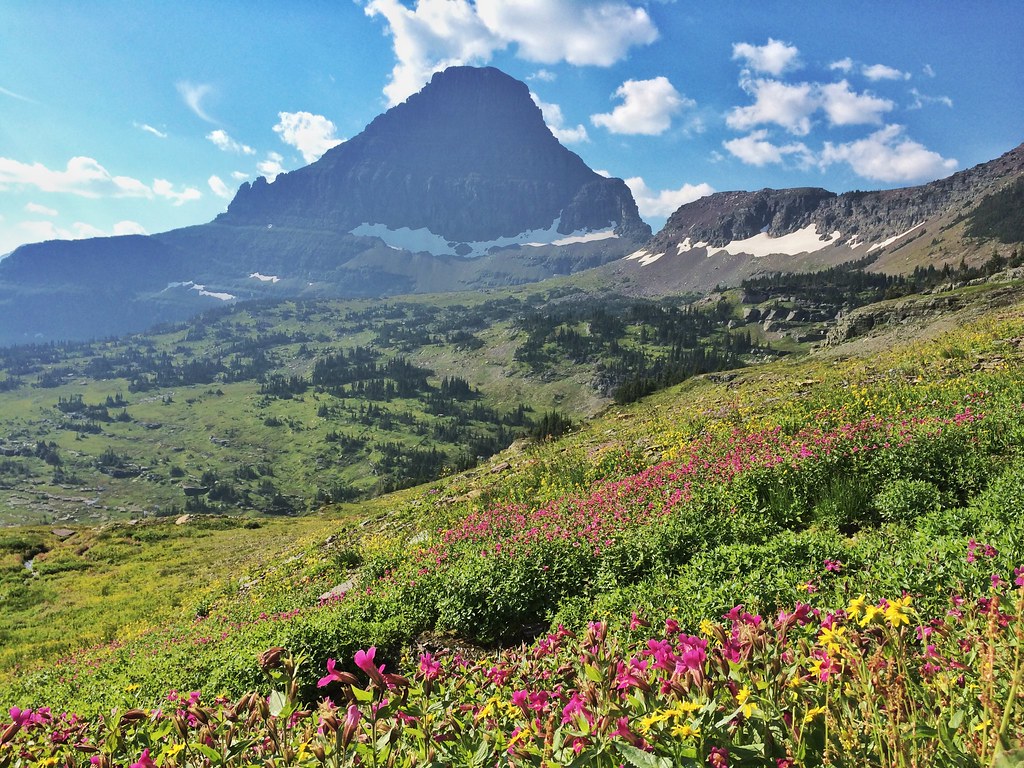 We passed a few fluffy, white mountain goats and arrived at the overlook where the blue Hidden Lake was revealed below us and an awesome triangular peak arouse from the shoreline. What a delightful little hike. We had wanted to also hike the Highline trail and Iceberg Lake but both were closed due to carcasses on them causing grizzlys and wolves to take control of those areas which was a big shame. 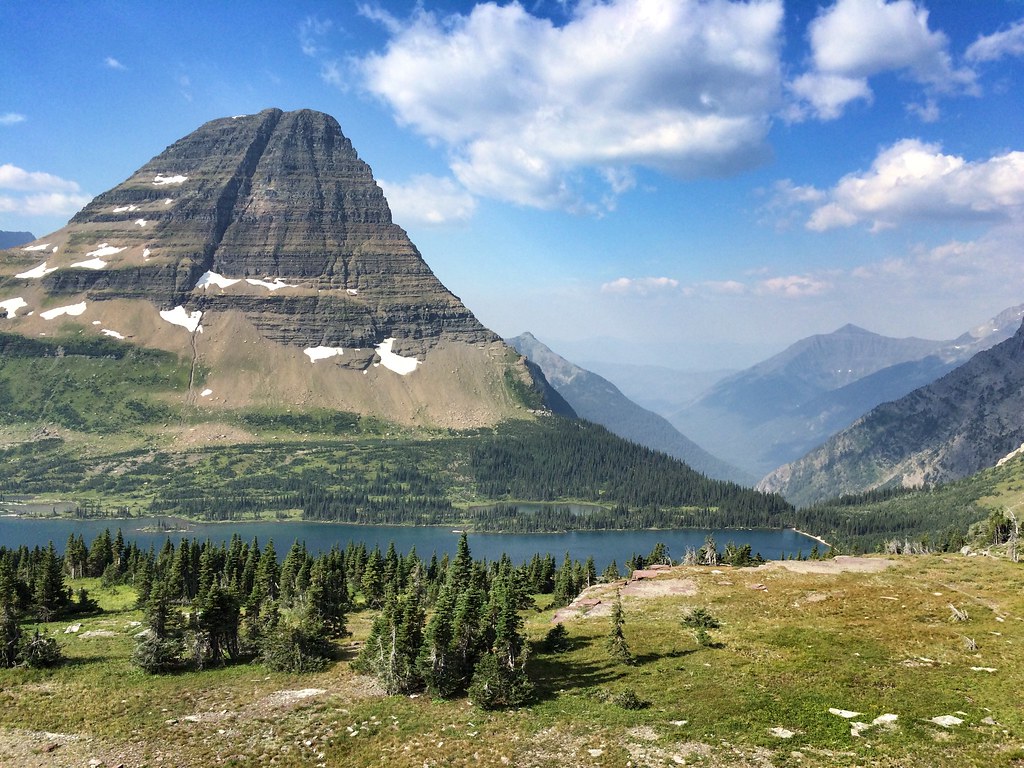 As soon as we finished the hike it clouded over, and maybe it was smokey too, it’s hard to tell but the incredible views were hindered which sucked. The route down the western side of the pass was quite the crazy drive. We were hugging a cliff edge while drivers heading up had concrete boulders between them and one hell of a drop off. The cliff wall wasn’t flat though, it caved in at times and over-hangs made us paranoid Daphne’s roof would be hit. The sun tried its best to pierce through the cloud and caused some pretty awesome sun beams to burst through. 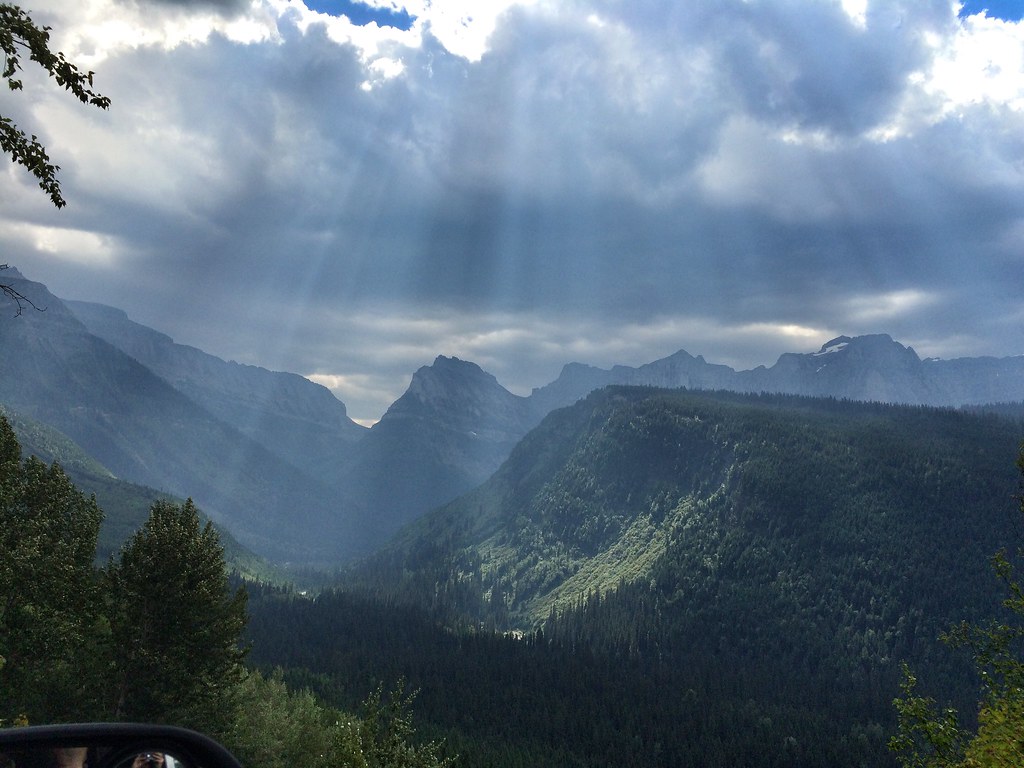 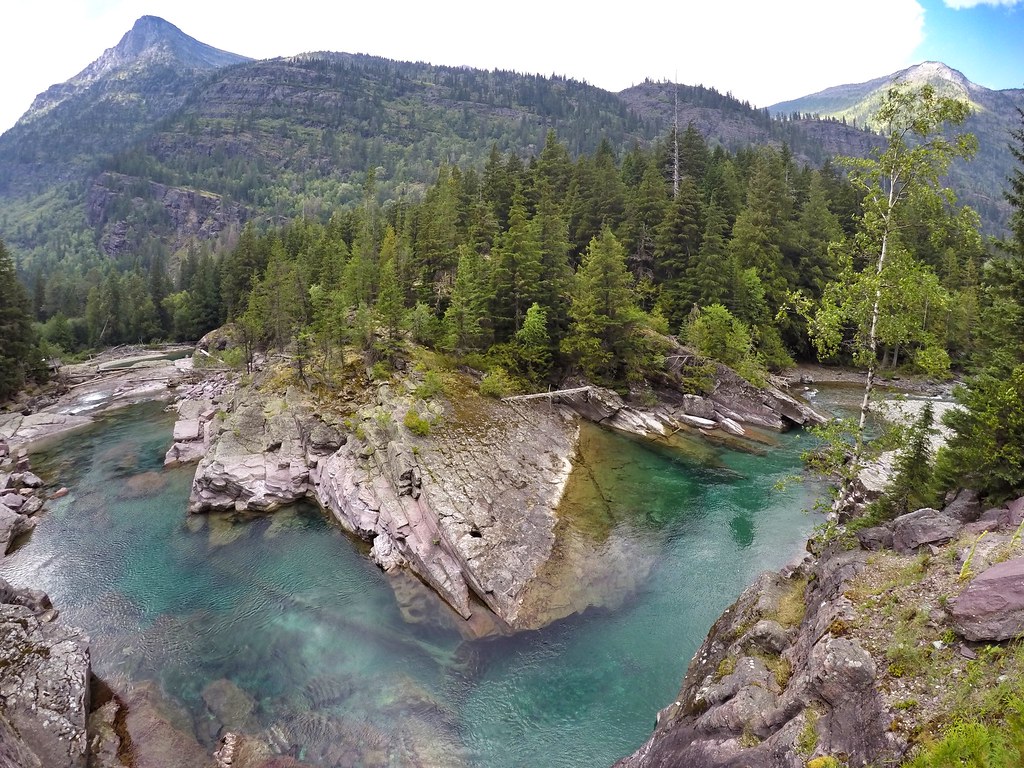 The next day we hiked up the Apgar Lookout Trail which had the longest switchbacks I think I’ve ever walked. The scenery was rather barren with the odd bleached tree trunk standing so straight and tall that it almost touched the clouds. We had a mule deer and two cute baby deer blocking our trail which was fine by us as we could take lots of photos. The view from the top should of been incredible but haze, cloud and smoke made it rather gloomy and less impressive. 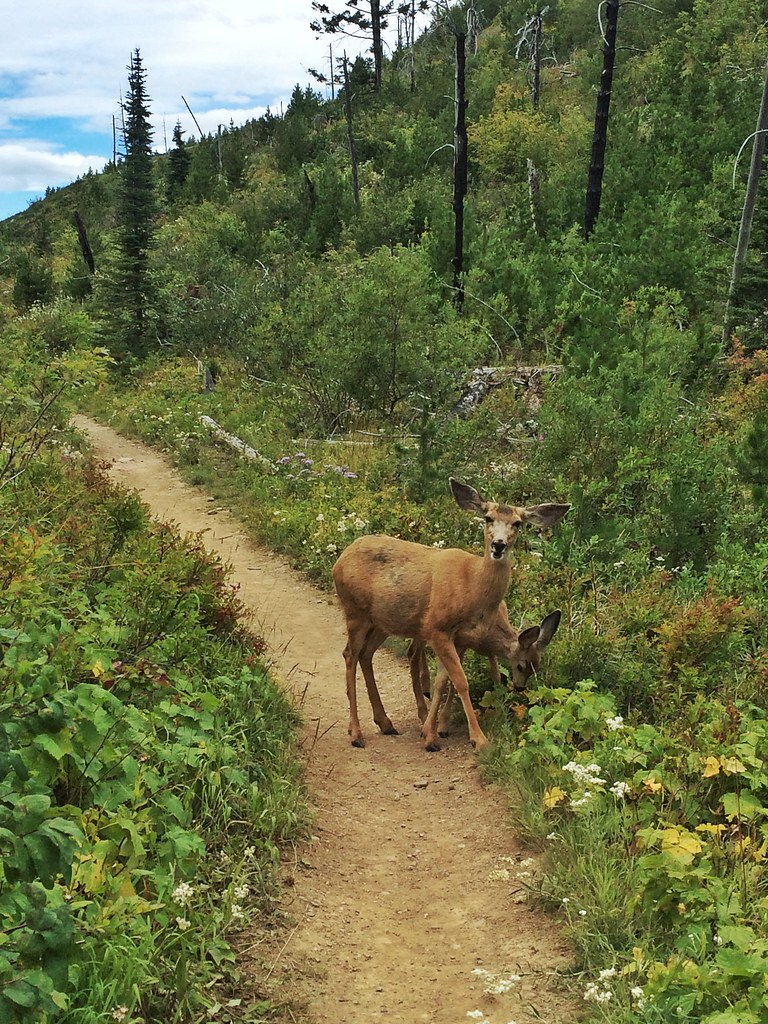 As we went to leave the park we spotted a black bear and cub in the woods, they came close to the road and changed their mind heading through the woods at quite some speeds. What a nice way to end our stay at the park.