We were pretty excited about re-entering the United States. Southern Canada hasn’t been so easy to wild camp and we’ve missed the freedom of Alaska, clearly the lower 48 are crazy busy in comparison to the most northern State but there’s still a lot of wilderness and the beautiful national forests. So we headed to the border between Waterton and Glacier National Parks and had beaming smiles and banter for the border guard. Sadly, he wasn’t in the mood for that and after asking us our itinerary for the USA he said there were a few issues with our plan. Firstly, we had to go back to the UK before we could reenter the States on another visa waiver, secondly we couldn’t sell our van as that would mean we’d be making money and last but not least, our red pepper wasn’t allowed to cross the border either! He said we needed to head into the office to discuss matters so we parked up and walked to the office both shitting ourselves with worry.

We’d emailed the border folks before embarking on this trip and they’d suggested it was fine to spend 30 days in Canada and then reenter the States. We’d also been in contact with the vehicle folks who said it was fine to sell an Alaska vehicle in Florida. So we got to the office and were frantically searching for the emails – which of course Craig had deleted because that’s just what he does. Luckily the new officer said he didn’t care about us selling the van, that was fine, but we should have to go home to get another visa waiver…this could end our whole roadtrip very abruptly!! After chatting a while I saw him reach for the stamp and heard that wonderful noise as the ink stained my passport. He said he didn’t think we were planning on living in the States, which we’re not and that he’s put a note on our files that if we do a longer roadtrip than 3 months again we will require a visa in advance. Hooray! So that was a relief, except for the filthy pants we had to sit in for the rest of the day. 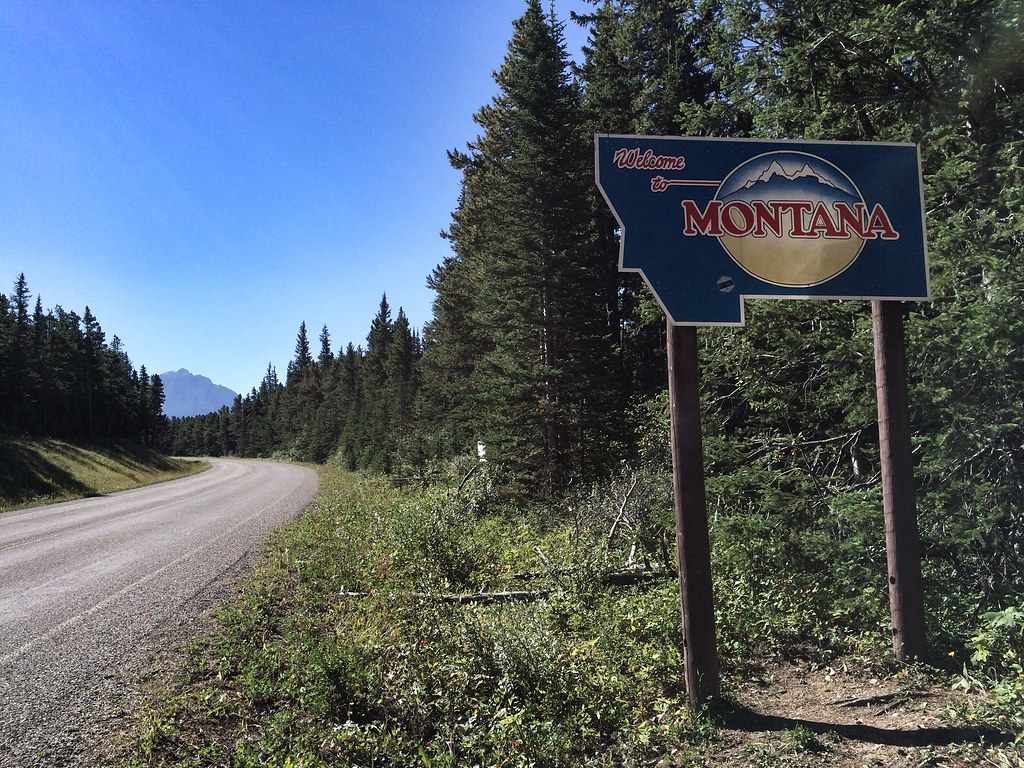 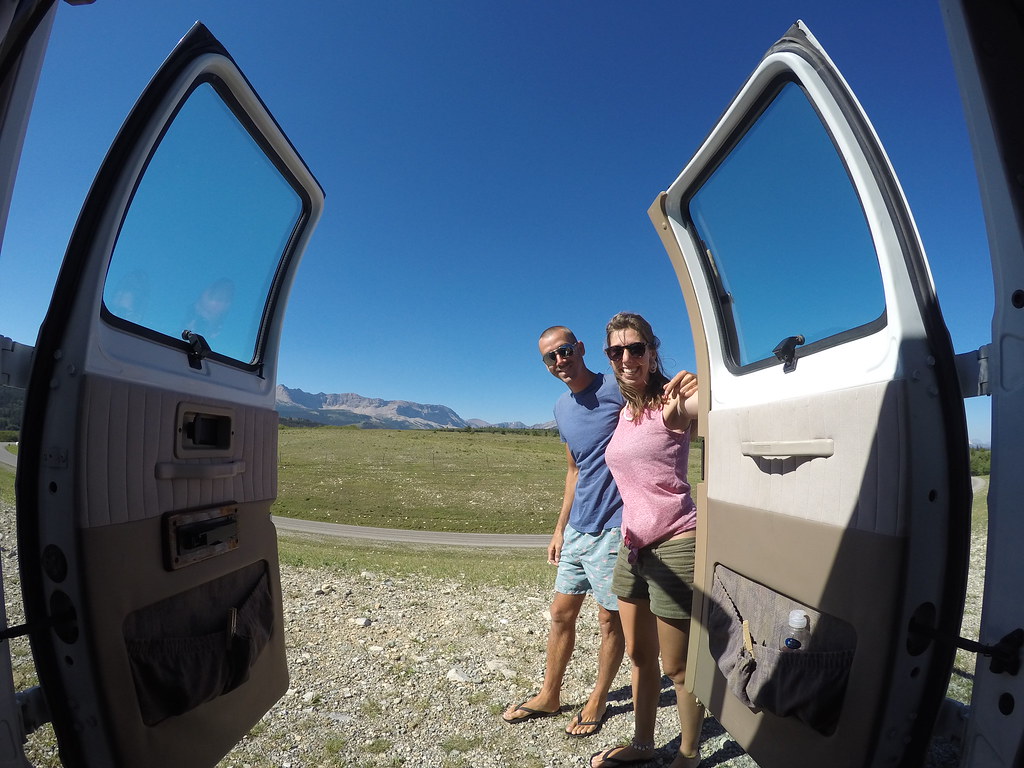 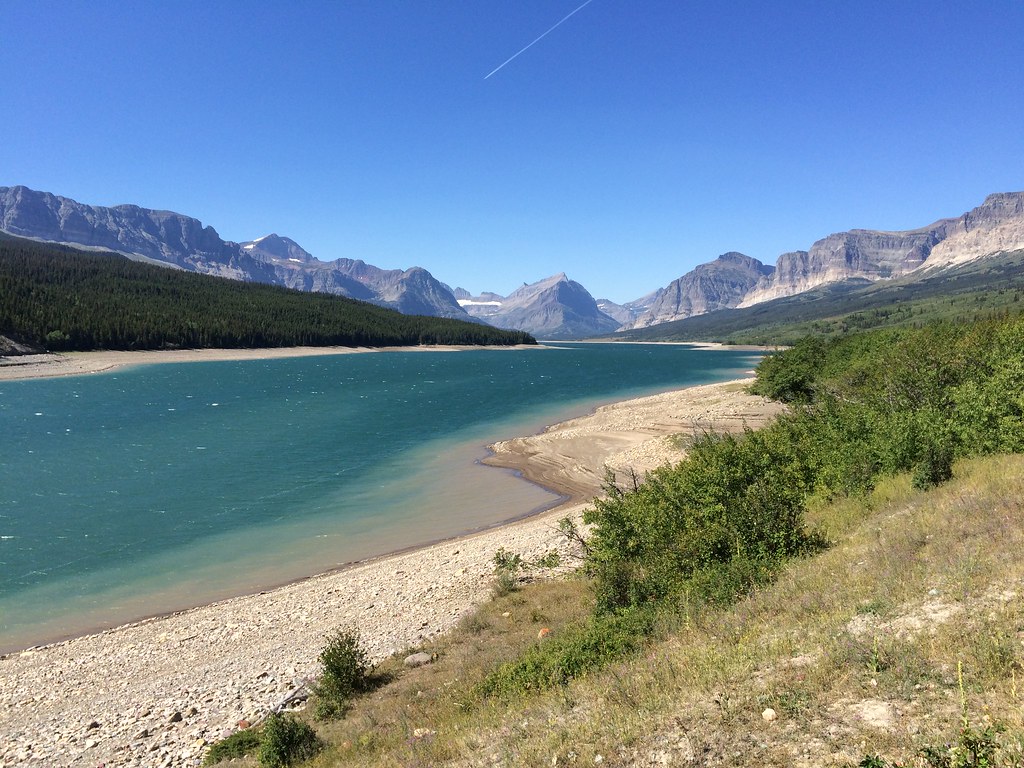 The road conditions were horrendous compared to the smooth ones in Canada, we were bumping all over the place. We entered Glacier National Park along the scenic road to Many Glaciers where we skirted along the shores of Lake Sherburne. It was a brilliant blue colour but covered in white caps from the winds making it look like the sea. The mountains all around were spectacular and made the drive even more impressive. We arrived after lunch time and didn’t want to do a really long hike so we opted to do part of the Grinnell Glacier hike. It’s a very popular trail that went past two clear lakes and then gradually climbed up the side of a mountain. Because it was such a popular hike we didn’t expect to see any wildlife but a group of 6 people walked past us going the opposite way and muttered something along the lines of “there’s a bear back there” I figured they were having a random conversation between themselves until the man at the end of the group also muttered “bear back there”. What the heck, how much of a rush are you in that you can’t stop and explain yourselves. Black or grizzly? Trail or far away? Geez! So we asked some questions and began looking for a black bear near the trail. The path became very overgrown and the winds picked up causing all the berry bushes to shake like they would if a bear was rummaging through one. Brilliant! We didn’t spot the bear though so continued up until we had a fabulous view of Grinnell Lake. Dramatic peaks holding glaciers lined the valley and we were happy to call it day and head back after such a great view. 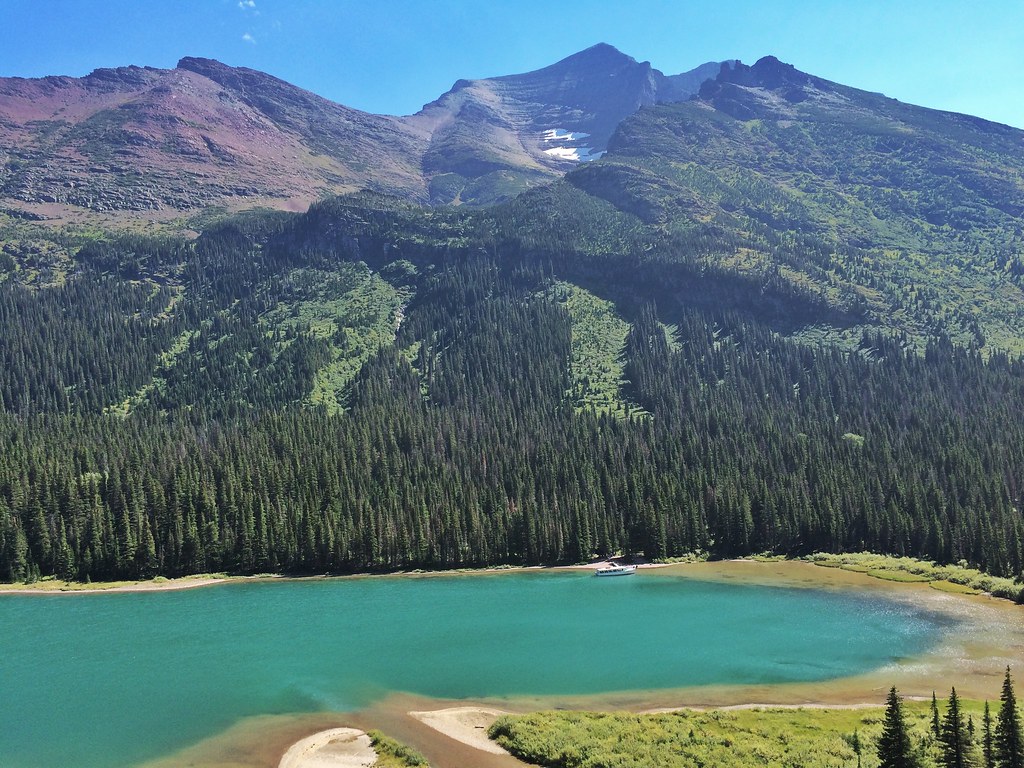 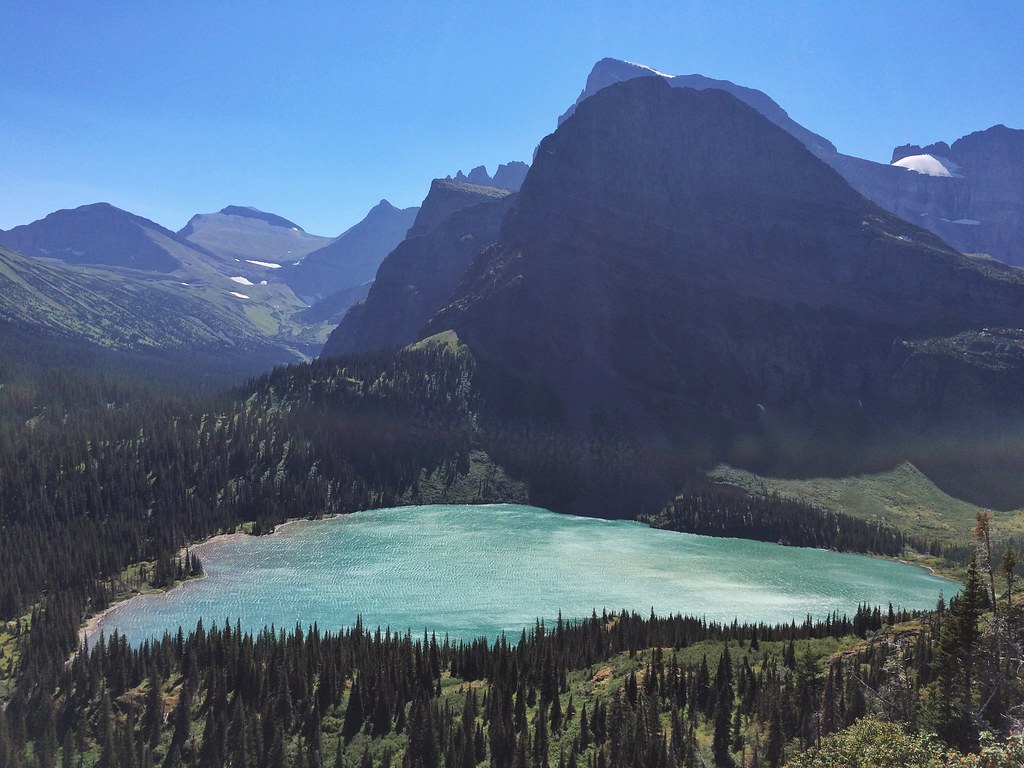 On our way back down another group of 6 said the same thing “bear near trail” so again we quizzed them on the details and this time they said it was a grizzly. Interesting! Bumping into a grizzly sounded a lot more dangerous than a black bear and the wind picked up even more making our chatter to warn the bear of our presence fade away through the valley. The bushes were swaying and shaking as we walked past and then we saw the bear. Luckily it wasn’t on the trail, it was about 30 meters up the hillside and looked very content eating lots of berries. We wondered if it was the same bear the last group had warned us about and to be fair it was hard to tell what sort of bear it was. The colouring was light brown, but that could be either, the ears were tall suggesting a black bear but there was a small hump on the back suggesting a grizzly. We showed a photo to a ranger who thought it was a grizzly, probably a juvenile judging by its small size. When we got back from the walk we took Roland out on Swiftcurrent Lake which was so shallow in areas that we were close to getting beached. We really had to stick to those shallow shores though as the wind was crazy and we ventured too far into the open water at one point and the power was crazy. Suddenly we felt rather vulnerable in our inflatable boat surround by ice cold, choppy waters. I started judging the distances to the nearest shore for safety incase we sunk and I opted for a swim to the large, ugly, brown hotel, probably quite luxurious mind you. Maybe they’d take pity on us and let us take a warm shower and ply us with cocktails after losing our yacht. But of course that didn’t happen and Craig managed to get us back to the shore where we safely admired the insane peaks around us which resembled the Egyptian pyramids with glaciers on them. 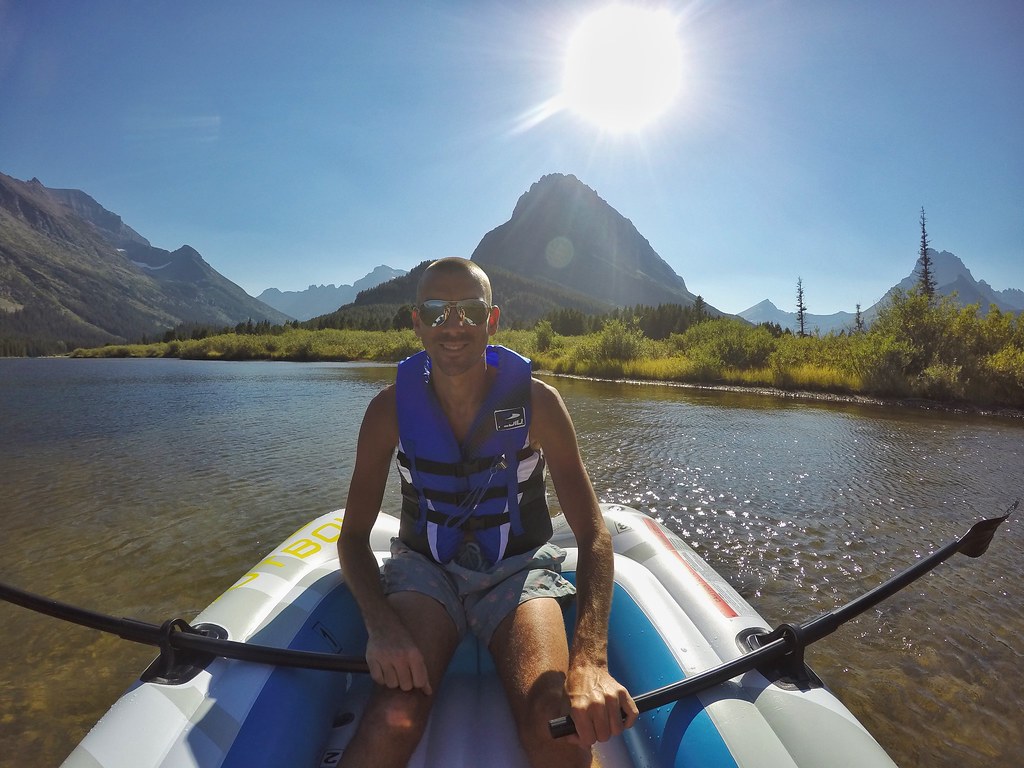 We exited the park and found a free place to camp on a grassy area besides a river. It was just past some cattle grids so cows were roaming freely which I just loved. At one point we thought a black bear was very close but it was just a black cow, I told a lady that story a week later and she said she did actually see a black bear at that very spot!! That night the stars were amazing, we could see the Milky Way too. We’ve hardly seen any stars on this trip after so much daylight from the midnight sun so it was a pleasant change…if a little creepy outside in the darkness.