The Crypt Lake Trail has been voted one of the top 20 hikes in the world by National Geographic and sounded like an exciting hike for us. It involved getting a boat across the Upper Waterton Lake to the trailhead which we were a little reluctant about getting due to it costing $24. We thought about rowing Rowland across but didn’t want to have a battle against the winds so we paid the fee and set off on the 8.30am boat.

A worker on the boat gave the 50 or so passengers a briefing about what to expect on the hike. He mentioned bear safety too and basically said bear bells are shit, they don’t travel as far as voices so it’s best to talk and occasionally shout. So I carefully grabbed the bells attached to my belt and hid them in my bag. To be fair when I’m huffing and puffing up a mountain the bells rocks as I don’t have the energy to talk, but with this many people hiking and two other boats arriving today we weren’t expecting any encounters. Everyone piled off the boat and we managed to quickly plow up the hill ahead of the queue. The path led up via switchbacks through the forest so we could hear the chatter of people below us. We eventually left the woods and climbed up a rocky trail with views of a huge mountain to our right across the valley. When I was exhausted I gave Craig the backpack and he put it down on the floor and had a hissy fit about why I packed so many clothes in the bag. I plodded along pretending I couldn’t hear him and he eventually caught up and frantically said something was leaking in the bag. We put it down and threw everything out…the water bottle was full, the coke can was empty. Noooooo!! What a disaster. It had been pierced on a rock and spilt over everything at the bottom of the bag. 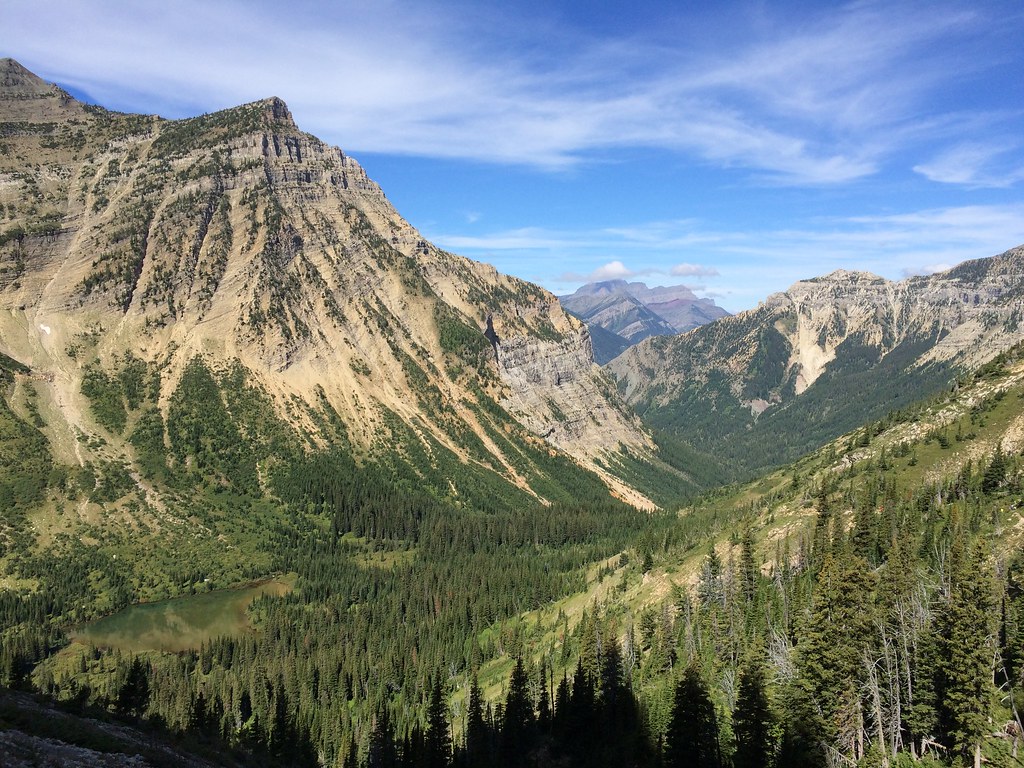 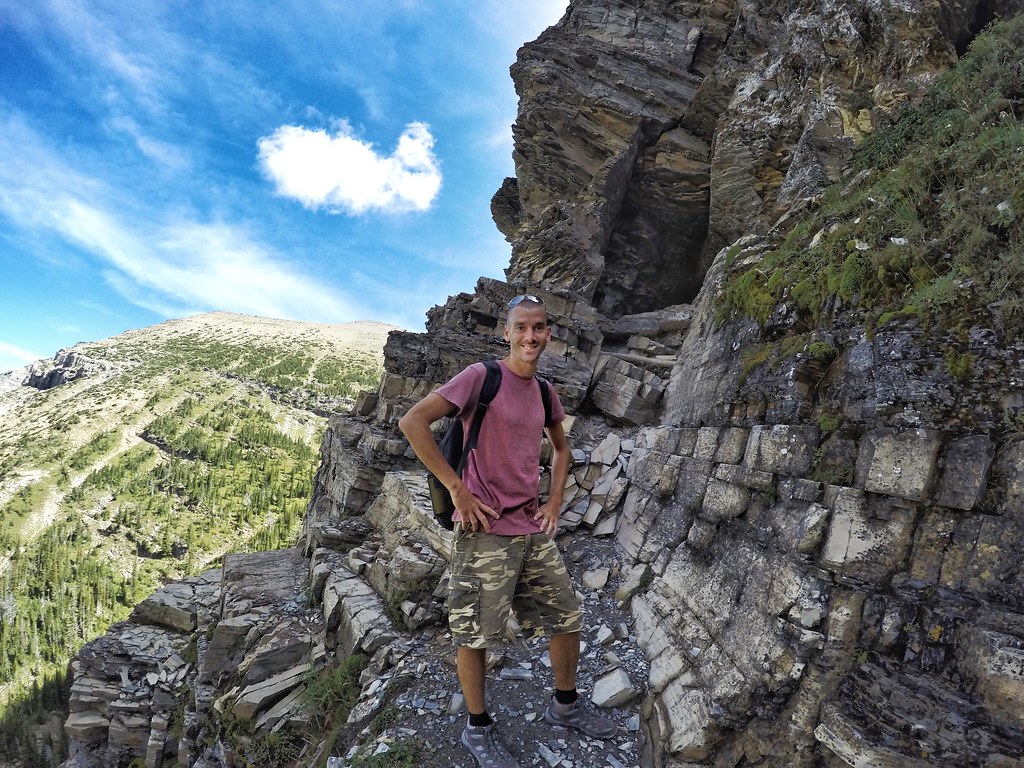 We trudged on and finally reached the exciting part of the hike. The trail narrowed and went along a cliff edge with vast views to our right of the beautiful valley. At the end of the cliff trail we were greeted by a rock wall with a ladder leading up it and a hole in the mountain side. We could see the small hole of the other end so it was never pitch black but it was pretty dark in the middle and involved us crouching down to get through. I think a well built 6ft man would struggle a little through there. As we exited the tunnel we had an amazing view again of the valley and a waterfall falling off the edge of a cliff where crypt lake laid behind it. The final obstacle was another narrow cliff section where metal rope was lined along the wall to hold onto but to be fair it wasn’t really needed except for one particularly narrow section with a drop off to the side. 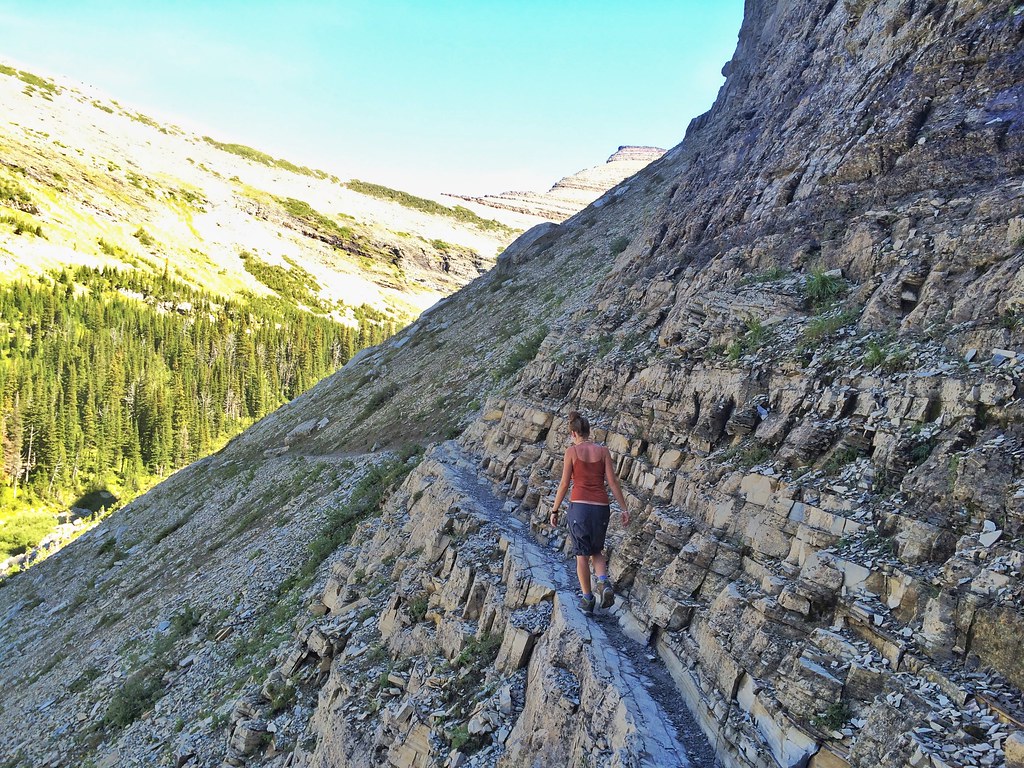 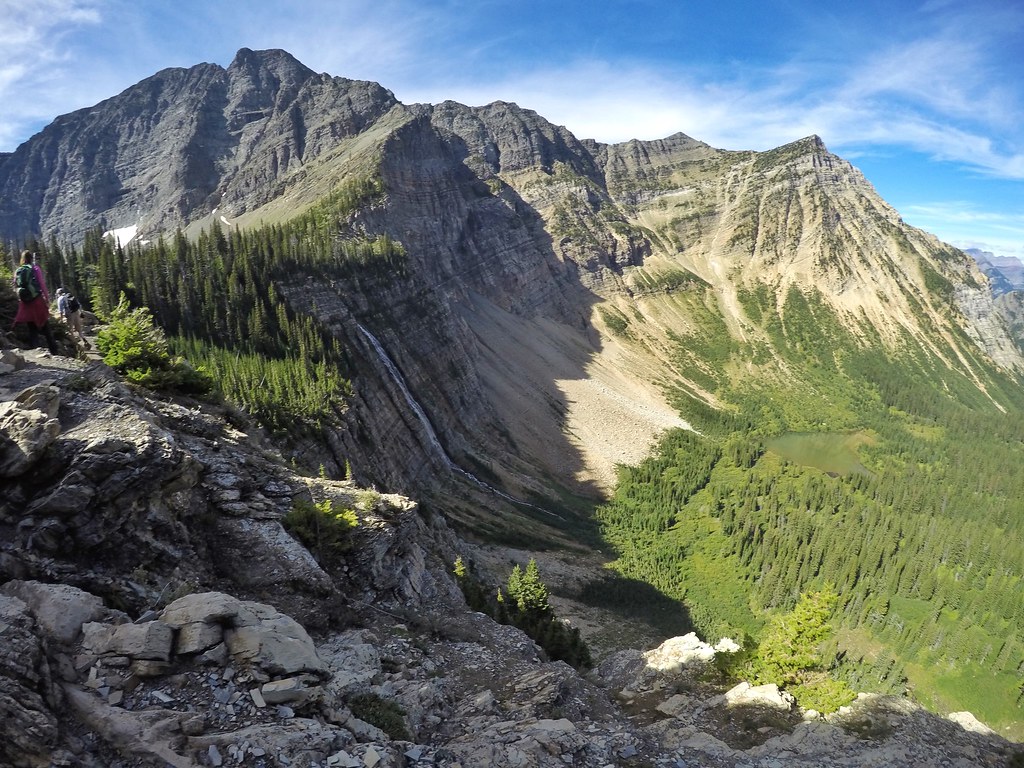 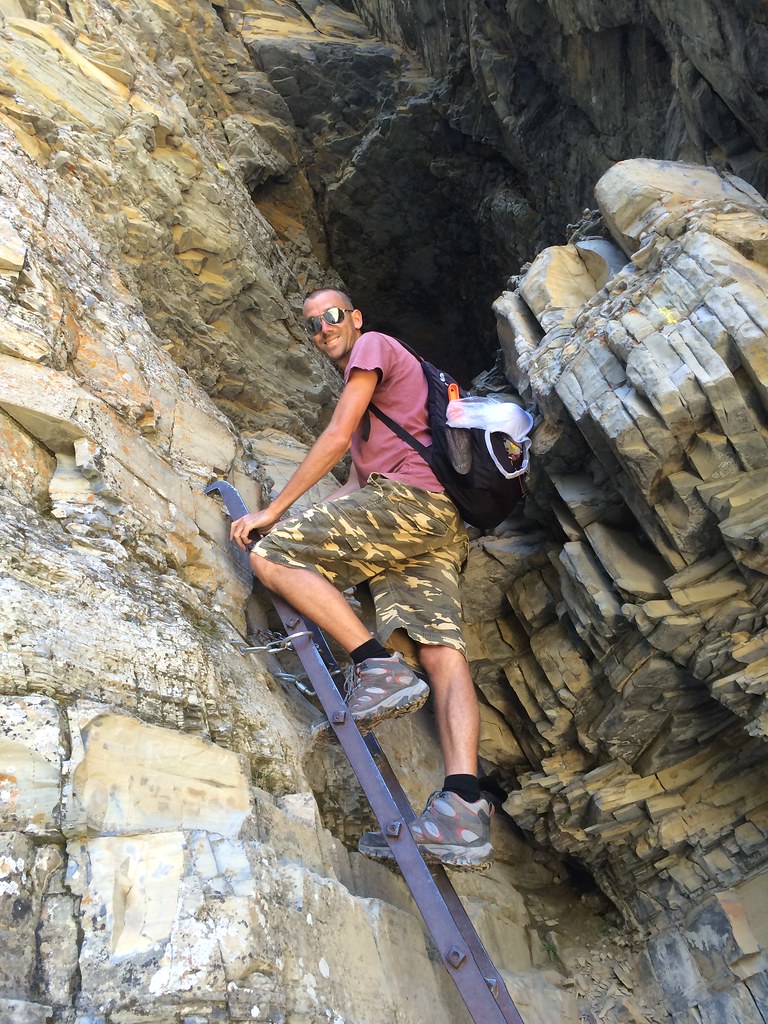 I was a bit annoyed as in the brochure it showed a women standing atop a mountain and in the background was an epic view of crypt lake, the mountains around it and the waterfall spilling over the edge, that’s what I was expecting to see. But our hike didn’t gain that elevation and purely just led us to the lake. It was nice, but not what I expected. So we arrived to a beach of people at the shores of Crypt Lake. The water was clear and the lake had towering mountains around it with Montana behind the farthest peaks. We were hot, sweaty and covered in coke so we stripped off to our undies and dove into the water…and got out as quickly as possible. It was a very chilly lake but our big splash got a few other people to jump in. We rinsed our sodden backpack and bits from the bag and left them in the sun to dry while we ate our lunch and dreamed about how good that coke would of tasted. 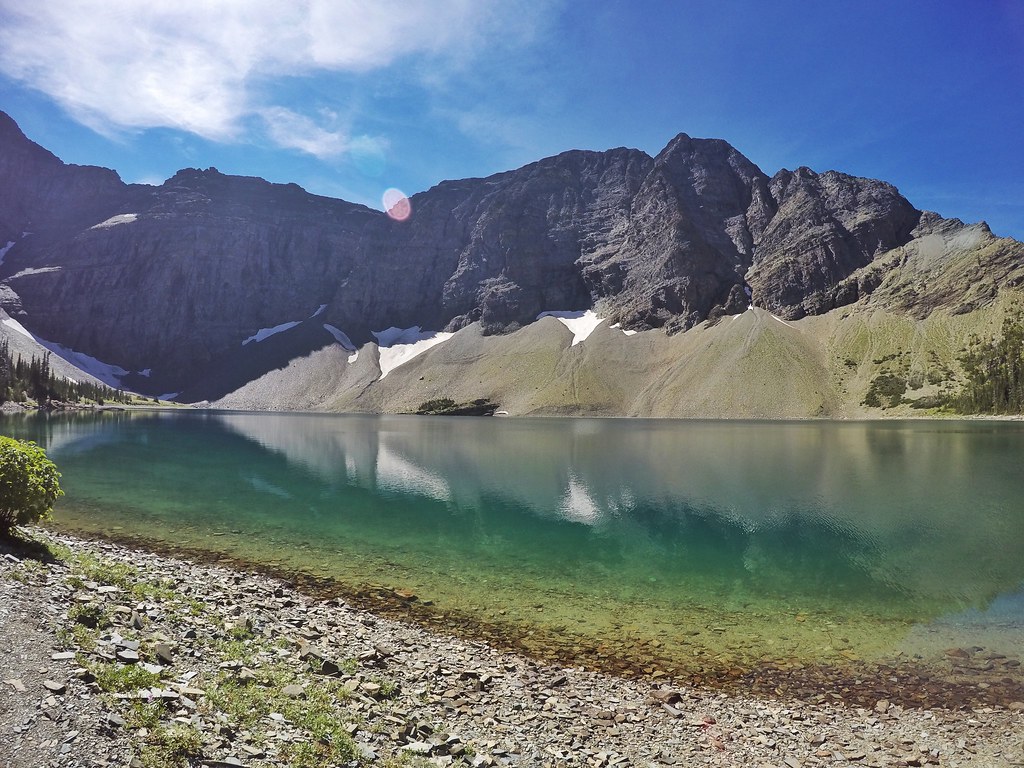 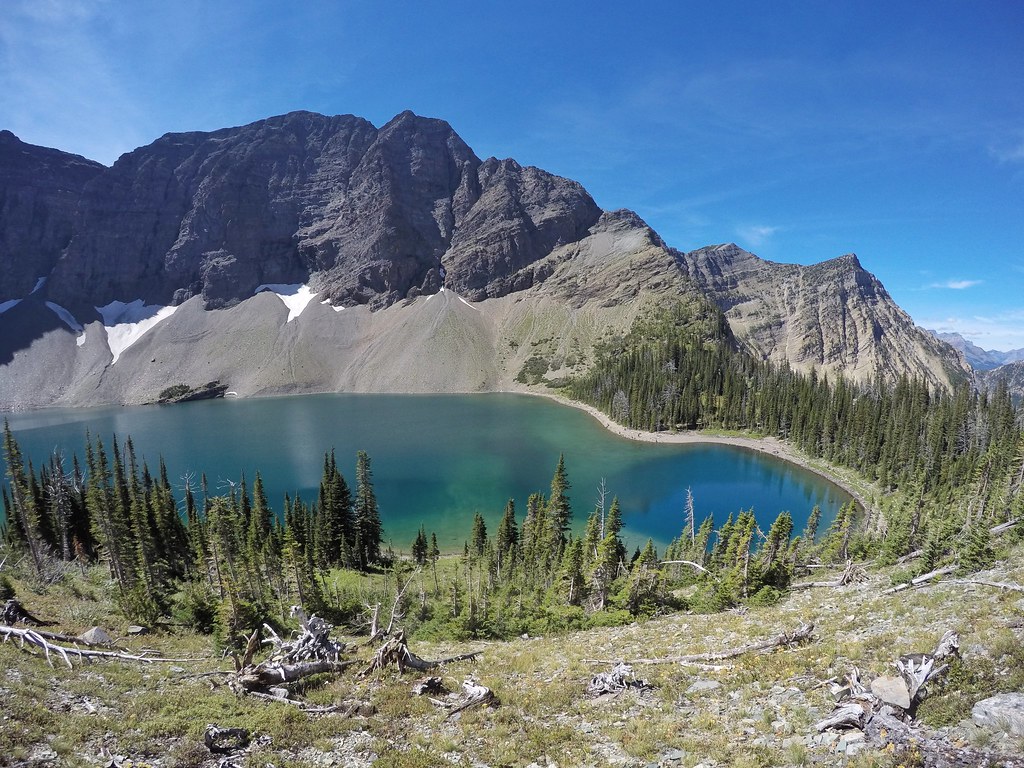 We decided as we couldn’t get the brochure view we’d at least scramble up the mountain-side to see the lake from a bit of elevation. It looked a lot better from up high and was nice and blue. The hike back was much quieter and rather uneventful except for a couple who occasionally made us jump out our skin as they shouted every minute to warn Bears of their presence. It was a pretty exhausting 17km hike taking us about 6 hours. We arrived back at the boat jetty to once again a beach full of people but this time they were waiting for the 4pm ride back to town. The lake looked so appealing. It was unbelievably clear and blue with pebbles fading as it deepened. So we headed to the far end of the beach, stripped off again and went for another swim. This lake was a much better temperature so we lasted around 45 to 60 seconds before rushing out. Like clockwork people on the beach also undressed and dove into the water! When we headed for the boat a couple thanked us for inspiring them to jump in which was nice to hear. On the ride back we passed a brown bear on the shore line, although we’re not sure if it was a brown black bear or a grizzly. It was a great hike but I’d be interested to see if hikes we rate as more impressive have made it into Nat Geo’s top 20. 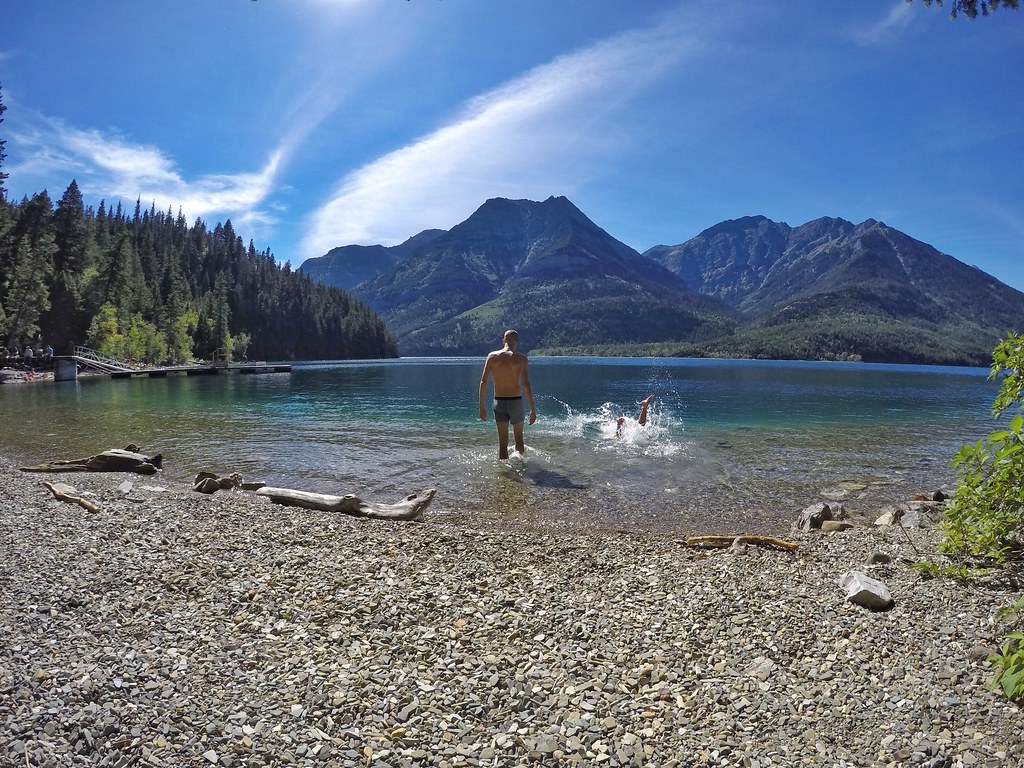 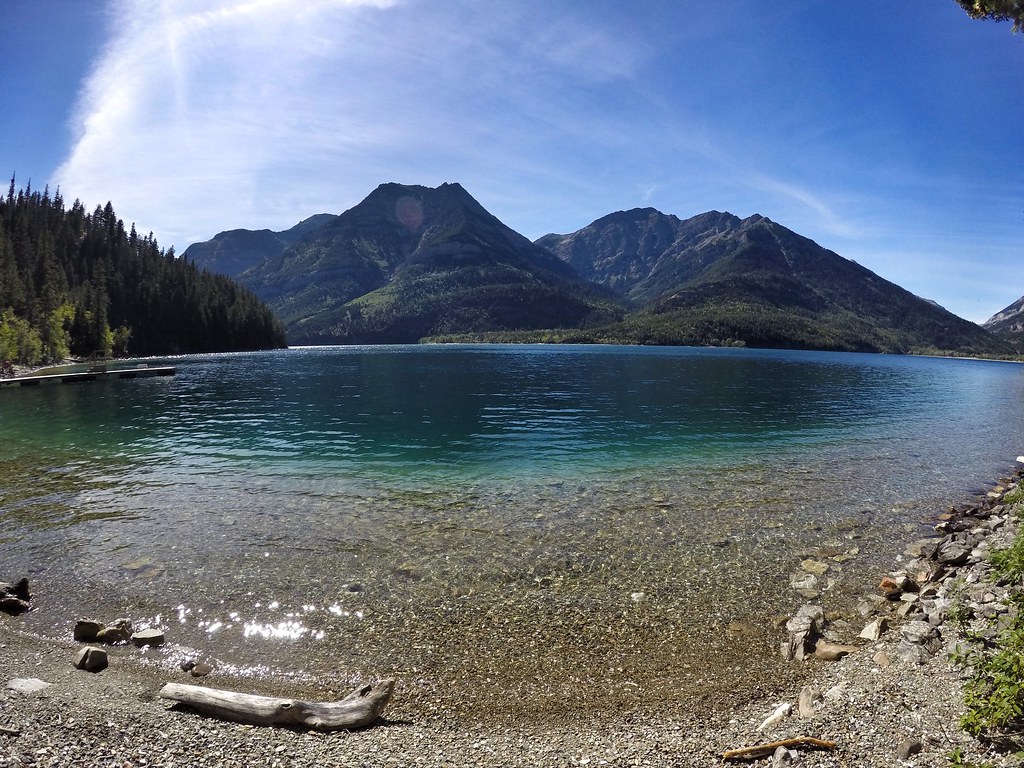