So we basically drove 200-300km from the Rocky Mountains, over the foothills and through the prairies to reach one particular place; Dinosaur Provincial Park. The park is tiny but home to the Canadian badlands and the largest collection of fossilised dinosaur bones on earth. Craig and I are big fans of desert scenery and albeit it was a stupidly long detour, we think it’s important to change the scenery to appreciate what your seeing. After two weeks in the Rockies it became normal being surrounded by stunning peaks, the prairies mixed up the views but they quickly become rather repetitive and so the badlands were a welcome change.

After seeing bear signs all over the Rockies we were now seeing signs telling us to drive slow for rattle snakes. The weather was very in sync with the surroundings with big blue skies and a zapping heat. At the entrance of the park was a viewpoint over the badlands. It really didn’t seem right for them to be there, how can the prairies just stop and change into an area of colourful rocky hills?

There wasn’t actually much to see in the park so we decided to walk the 3.5km scenic road instead of drive it. Silly silly people we are. We should of known when we spotted a man in his car wearing a full-body mosquito suit. We veered off the road laughing about what we’d just seen and then karma bit us in the butt, in fact she bit us everywhere. Suddenly we were surrounded by mosquitos who were quick to land and even quicker to bite. The middle area of the loop road was a free to roam area so we were venturing up on the rocky ledges and hills with no one else around…so luckily no one saw us running like hooligans and swiping the air. We slathered ourselves in mosquito repellent but it didn’t help matters much. 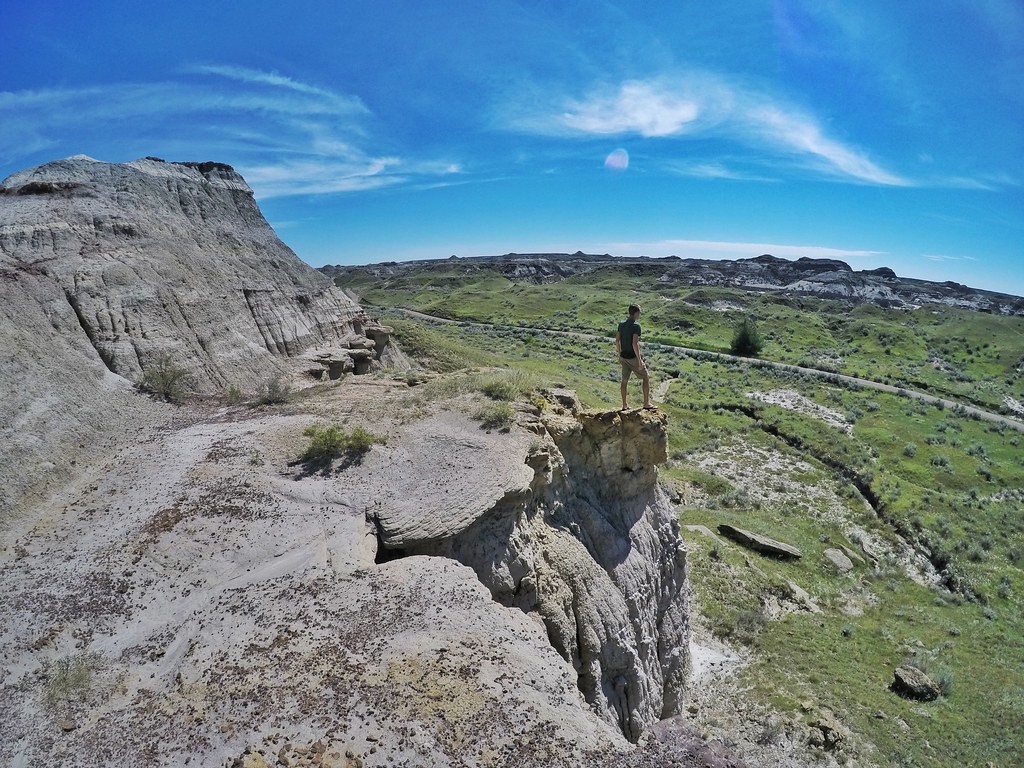 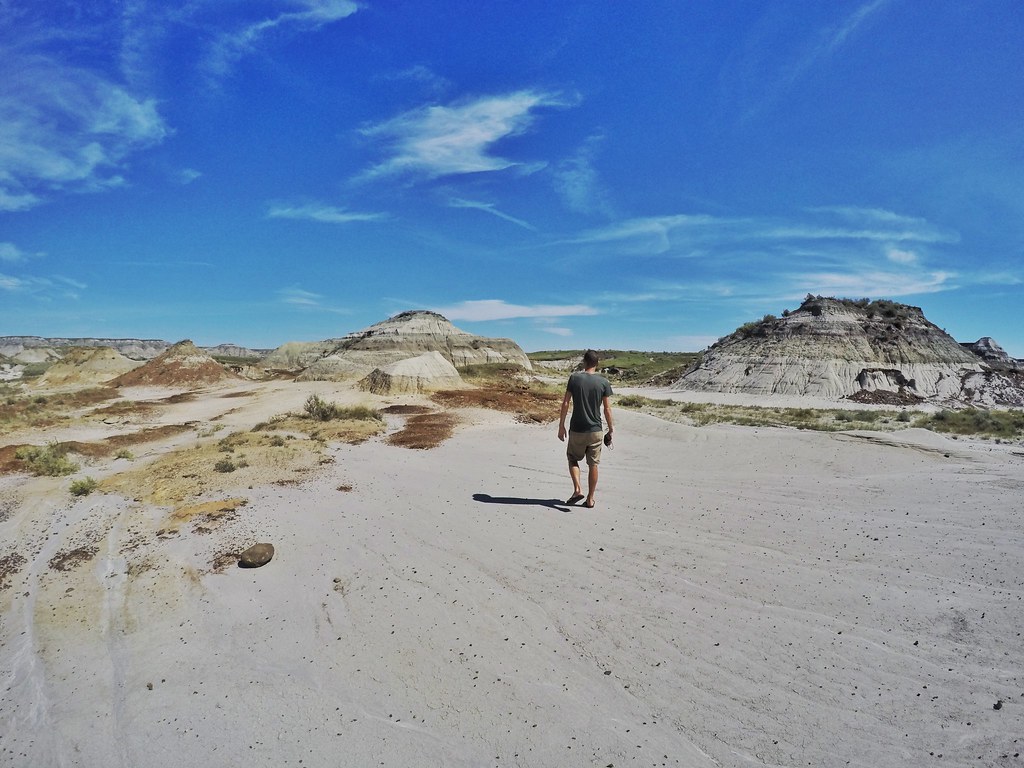 The scenery was pretty awesome though with white sand and rocky hills layered in colours. Some were covered in what was described as popcorn mud created when it rains as the mud expands to 10 times its size, just like popping corn does. Most of the hills had creases and cracks down them like when lava drips down volcanos or Avalanche tracks on mountains. We kept our eyes peeled for snakes and scorpions which was an odd concept after making noise for bears. After hiking a while we noticed an information board and trail leading to a dinosaur house showing the discovery of dinosaur bones so joined that path before we ventured too far off the road. 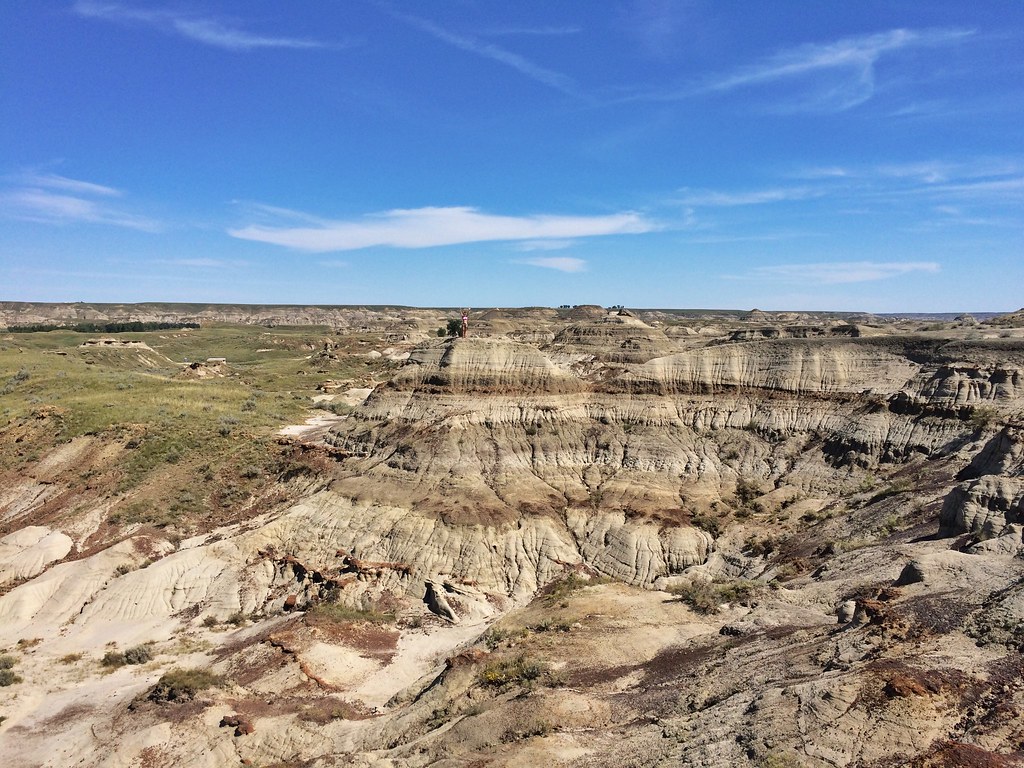 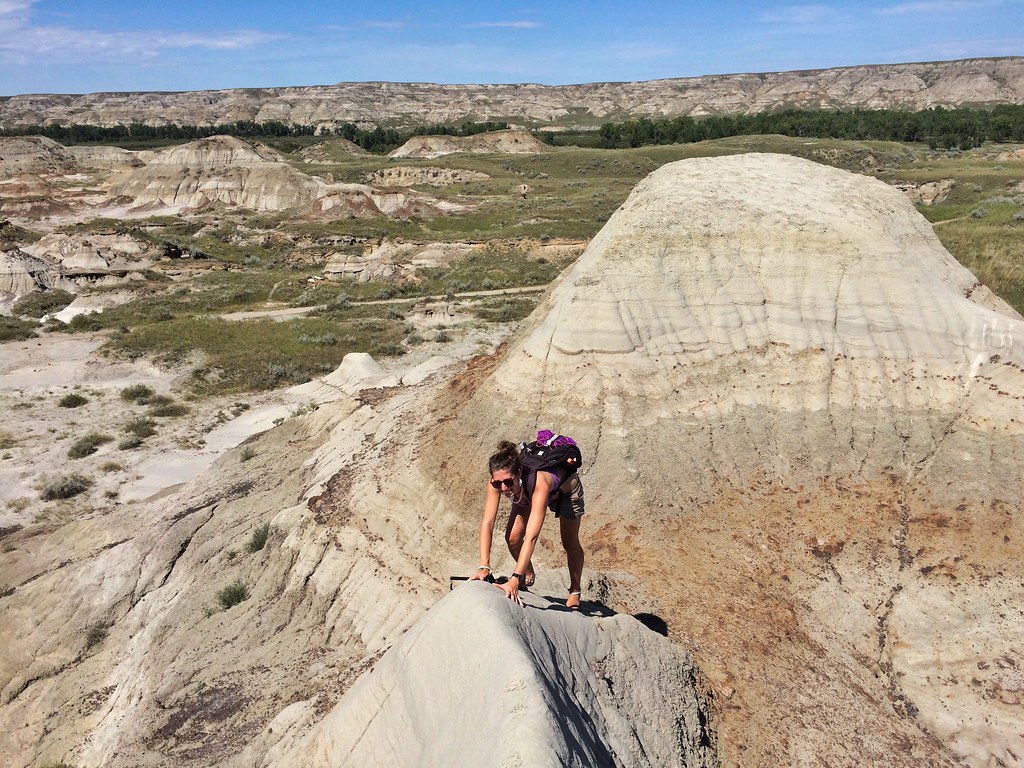 On our way back we headed up the badlands trail which was recommended to us for having hoodoos but we only spotted one and it was rather pathetic. I suppose once you’ve seen the best (Bryce canyon in Utah, in our opinions at least) it’s hard to be impressed by others. I did enjoy the scenery though but it was a constant mosquito battle. I could swipe my leg and kill three mosquitos in one go. I had blood marks all over my skin from killing mozzies, I think it’s officially the worst mosquitos we’ve ever encountered and it wasn’t even dawn or dusk, it was mid-day in the scorching heat!!

We desperately wanted to hang around to see the scenery change colour at sunset so we spent a couple hours hiding in the air conditioned cafe and then had to move outside to a picnic bench to cook dinner. Our mosquito repellent did an ok job till after dinner when we were washing up. Craig was swiping me with the tea-towel and in between swipes he was waving the bug-zapping-racket all around me causing sparks, smoke and loud bangs. It sounded like we were setting off crackers and anyone passing by must of had a right laugh at our expense. 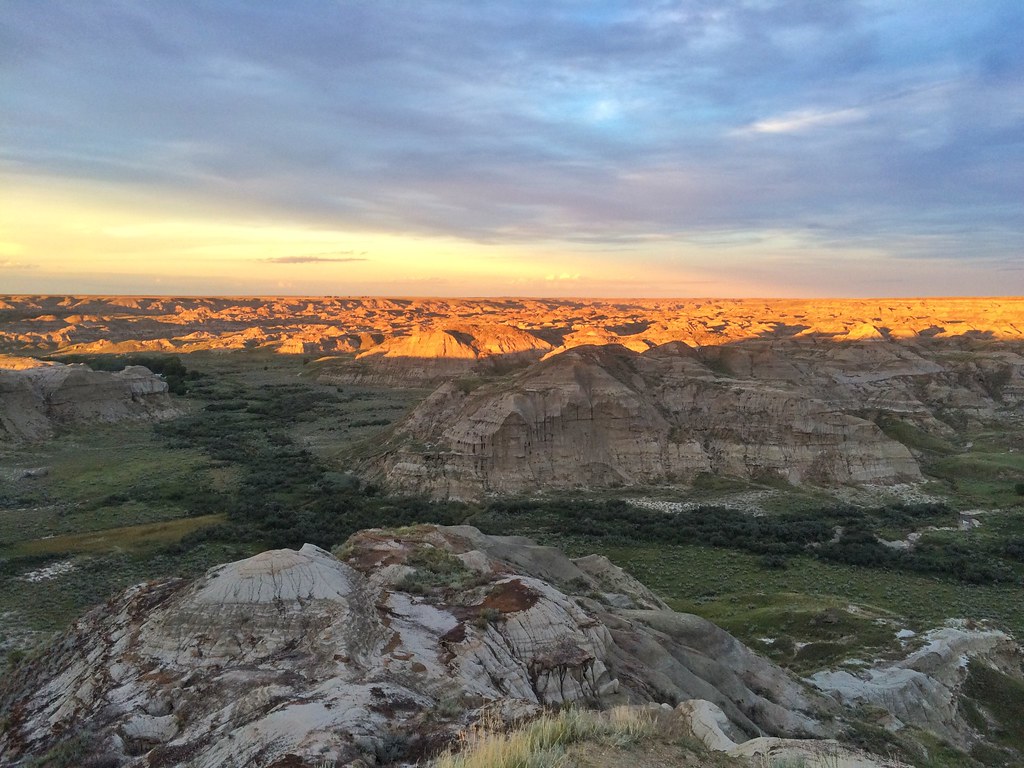 Much to our annoyance the whole sky had clouded over but as we left it poked out just above the horizon so we drove up the hill to the viewpoint where half of the scenery was glowing orange and the other shaded. Clearly the sun was too low to see the full view so we drove back down the hill for some closer views of the colourful rocks and then the sun sunk behind the cloud and quickly dropped below the horizon. Ah well, at least we got a glimpse! Not the most successful day but the Canadian badlands were nice in their own right and a superb place to get close encounters with mosquitos. 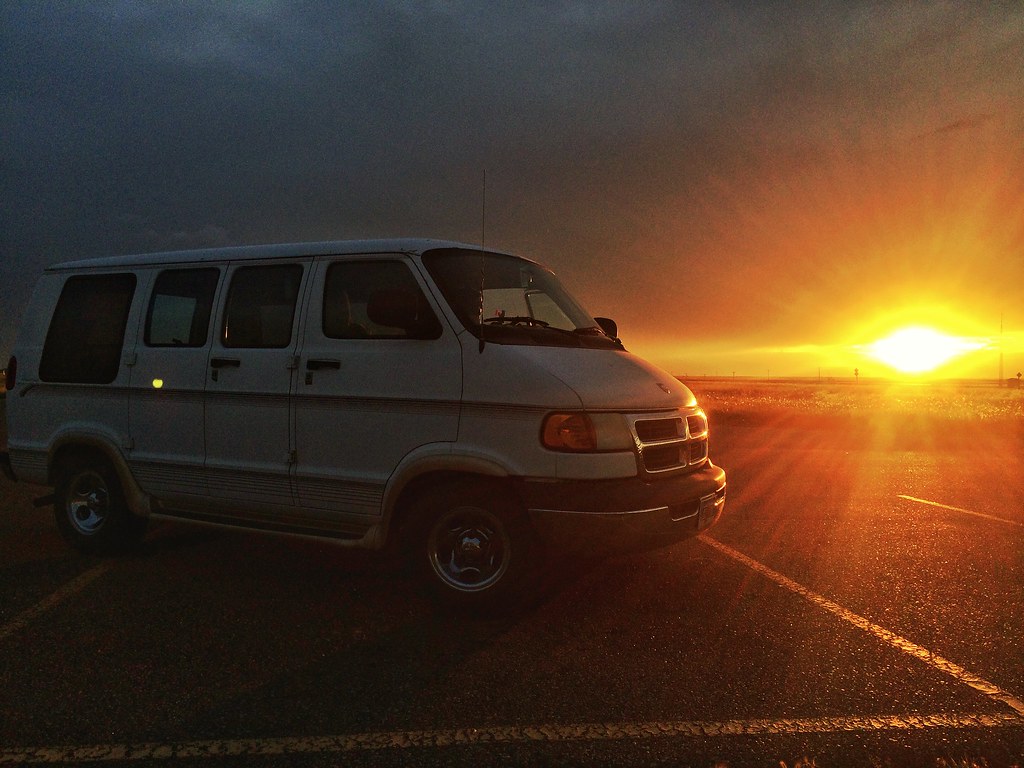