We rumbled over cattle grids as we passed through the foothills of the Rocky Mountains and soon realised our chances of seeing more Bears had drastically diminished. We did think we saw a bear but quickly realised it was a cow and they were free roaming. It was true cowboy country where locals ride horses to round up the cows and it was quite a pleasant change. We passed a large herd of cows beside the road who began venturing to the river for a drink. Much to our surprise they then crossed the river in a line like a small herd of migrating wildebeest…without the essence of speed mind you. 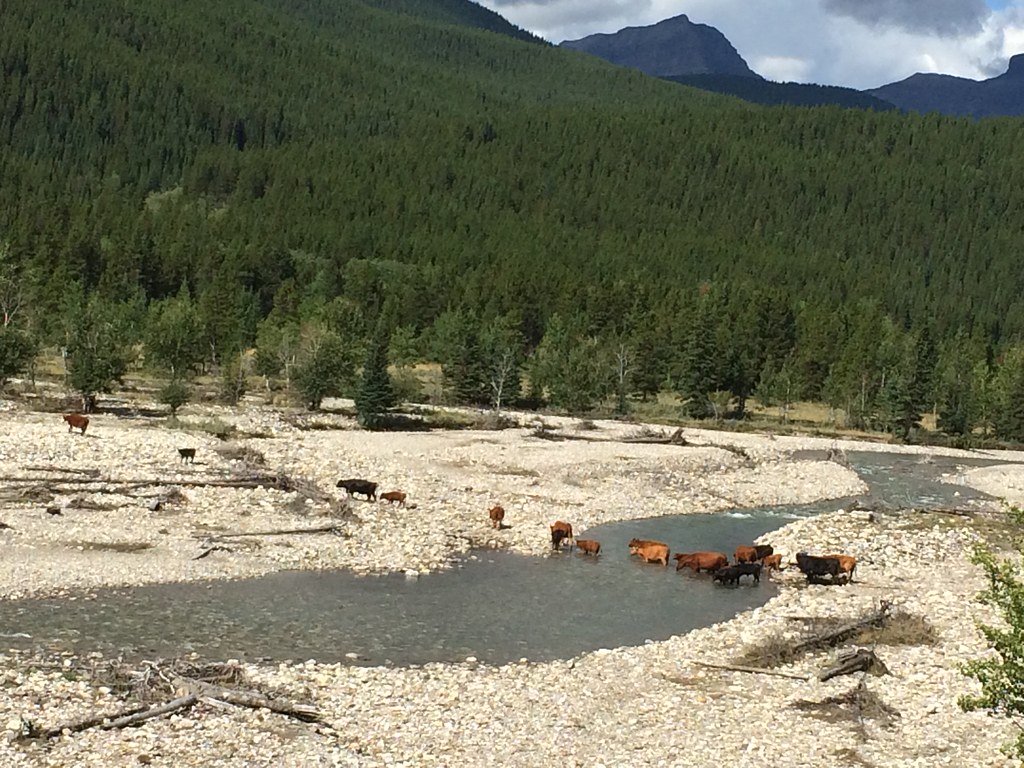 We took the cowboy highway south which passed numerous ranches and everyone was wearing Cowboys hats. We turned off at the Bar U Ranch National Historic Site where we were free to wander around the wooden buildings dotting the grounds. Each one was painted a traditional red colour, apparently it’s because the railway company used that colour so it was readily available and cheap. Every barn was done up to look as it did back in its hey day; from a cook house on a wagon to the saddle repair shop where intricate carvings marked leather belts. The stables still smelt of horses and the bunk houses had vintage possessions lying atop their thin beds. 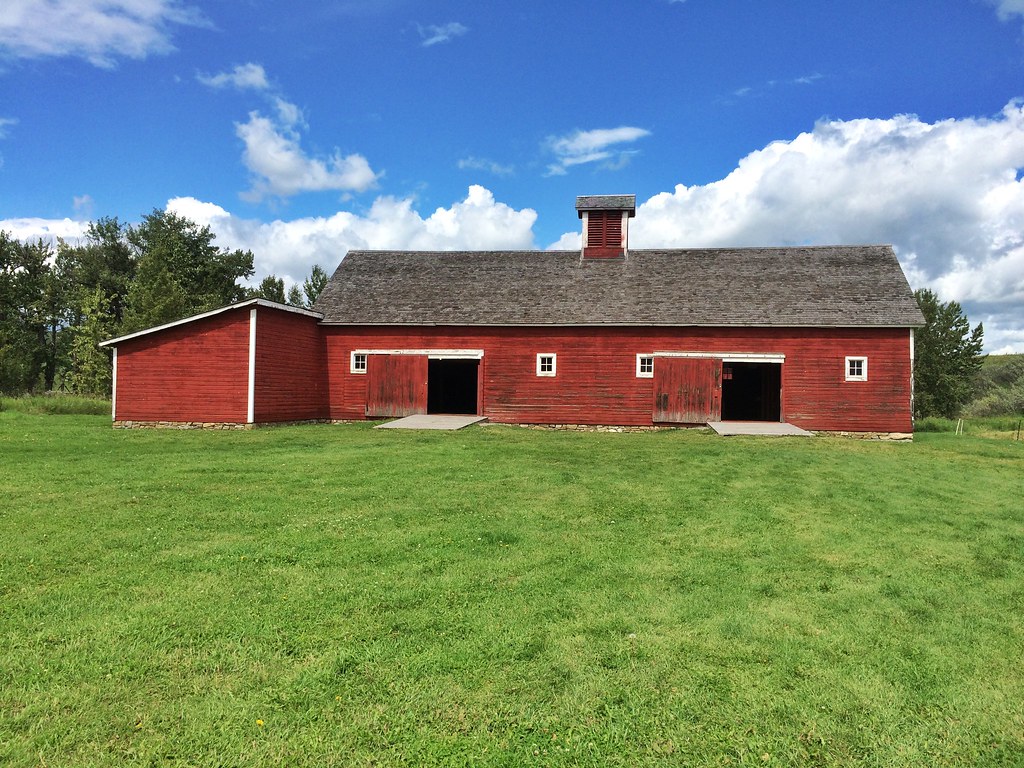 The ranch began business in the 1880’s and was fast to become one of Canada’s leading ranches. In 1890 the ranch had over 10,000 cattle and 800 horses. The chinook winds played a big part in its success as the wind that blew off the mountains often cleared the snow which allowed for easier grazing. They shipped in a bunch of Percheron horses due to their robustness; they were stocky and strong so could pull heavy wagons and farm equipment. Their hooves were the size of dinner plates and we got to meet four of the beautiful giants who were quite happy to be stroked while two white ones were strapped up in what looked like leather bondage gear and pulling a wagon up and down the dirt road.

Our favourite part of the ranch however was getting to try out lassoing for the first time. They actually called it roping which confused us. But anyway, a cowboy got us to grab a rolled up line of rope and find the loop in it. He then demonstrated by swinging it above his head, launching it, and getting it round the plastic cows head. Well, that looked easy, so we gave it a go and failed miserably. I couldn’t believe how difficult it was. After a couple dozen tries the worker said “ok maybe it’s best if you try the method I use to teach kids, you just hold the rope behind your back and swing it across like a frisbee”. Firstly, that’s quite rude, maybe if we’d failed 100 times you could tell us that tip, but secondly, we still failed at the frisbee method. It was unbelievably addictive though and we spent over 30 minutes swinging ropes in the air, complaining we’d been given faulty ropes and slapping the poor cow in the snout over and over. 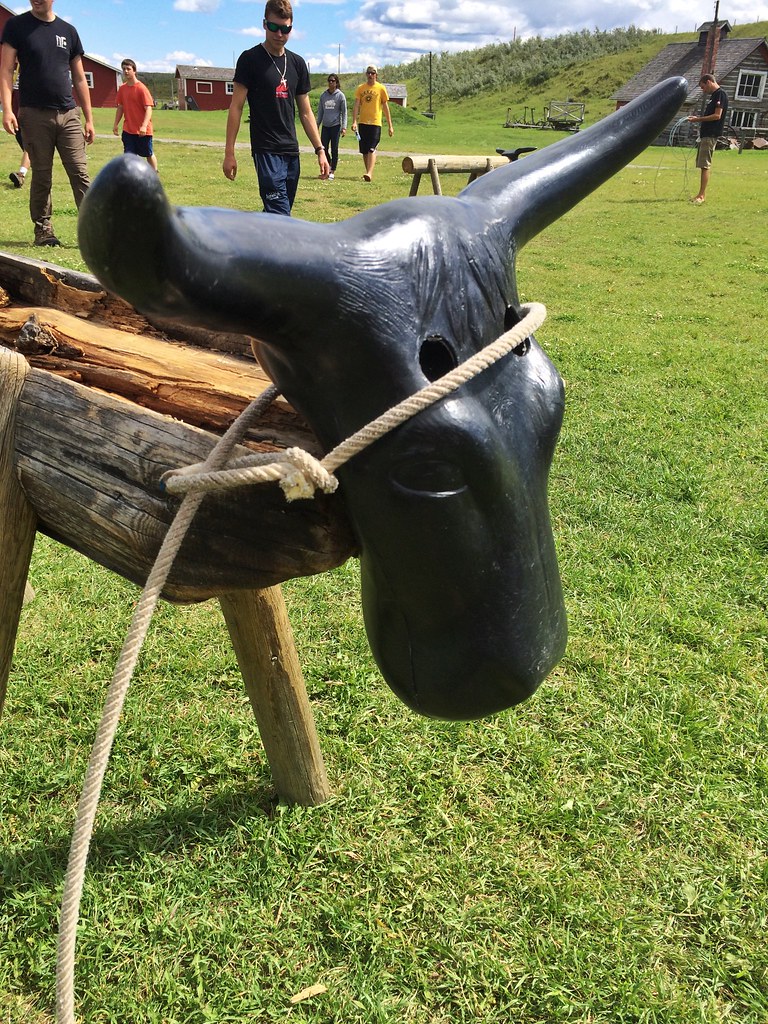 At long last Craig caught the plastic cow! And then I became even more frustrated; swing, throw, slap, collect rope, find loop, swing, throw, slap…. But I did it eventually and it was very satisfying so I tried it again and continued to miss which meant I had to keep trying until I caught another cow, I had to end on a good note so Craig got out his sleeping bag and set up camp for the next week while I lassoed till the cows came home. Literally. I can’t imagine trying to catch a moving animal while riding a horse. I have a lot of respect for those chap-wearing locals. We finished the afternoon at Chain Lakes Provincial Park. What a difference the lake was from up in the mountains. The water was murky and unappealing but we blew Roland up and took her out. I was instantly freaked out as we went over a huge area of reeds which climbed to the surface like underwater trees. We could both hear the worrying noise of the puncture we’ve had for a few days and I was wincing at the thought of the boat sinking and having to swim to shore, so I made it clear to Craig while we were in the middle of the lake that I would not be able to swim to the shore if we sunk, the reeds would wrap around my legs and try to pull me under, I think I’ll just call this lake my death bed. Luckily the puncture still didn’t effect the inflation much so we headed to the opposite side of the lake which had rolling hills and a herd of cows. The whole area looked just like England. There were three cows drinking water by the lake and a new one joining. I was pretty excited to say hi but as we got closer they started to move away. We remembered watching an adorable YouTube clip of some men playing “oh when the saints, oh when the saints go marching in” (or whatever the lyrics are) on their trombones to a field of cows and the cows all came down to the fence and crowded together to listen. So we thought we’d try it out….by using our mouths as trombones. After just a few beats of the song the cows were running away from us and we cracked up laughing. Well, those cows clearly had bad taste in music! 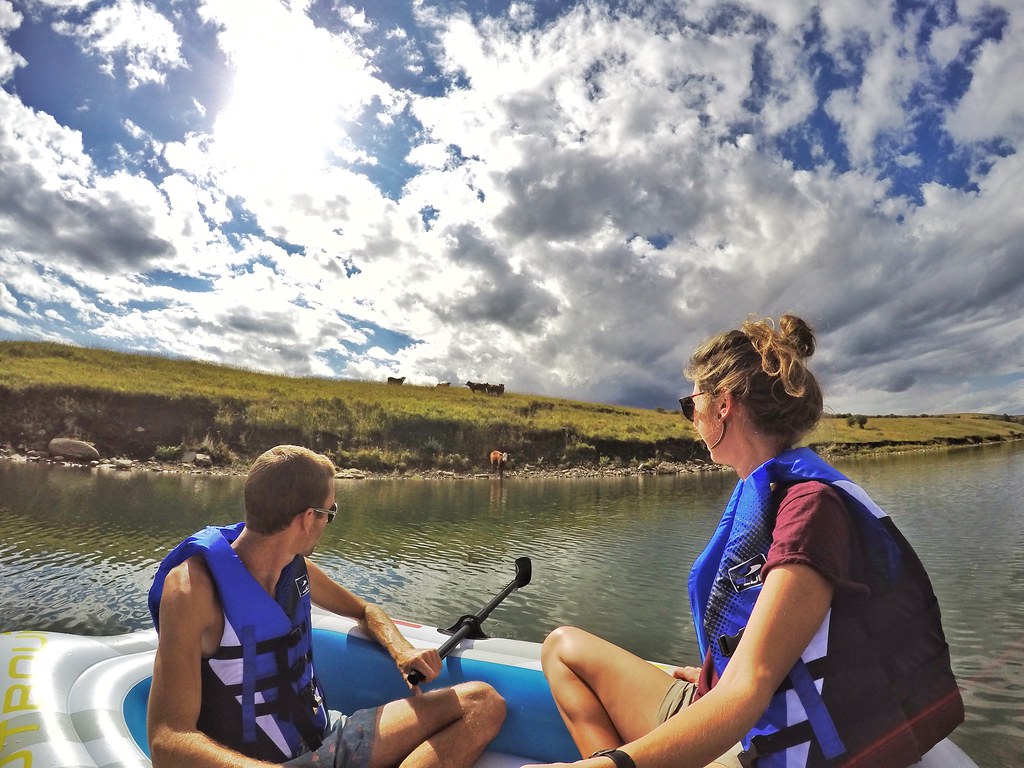 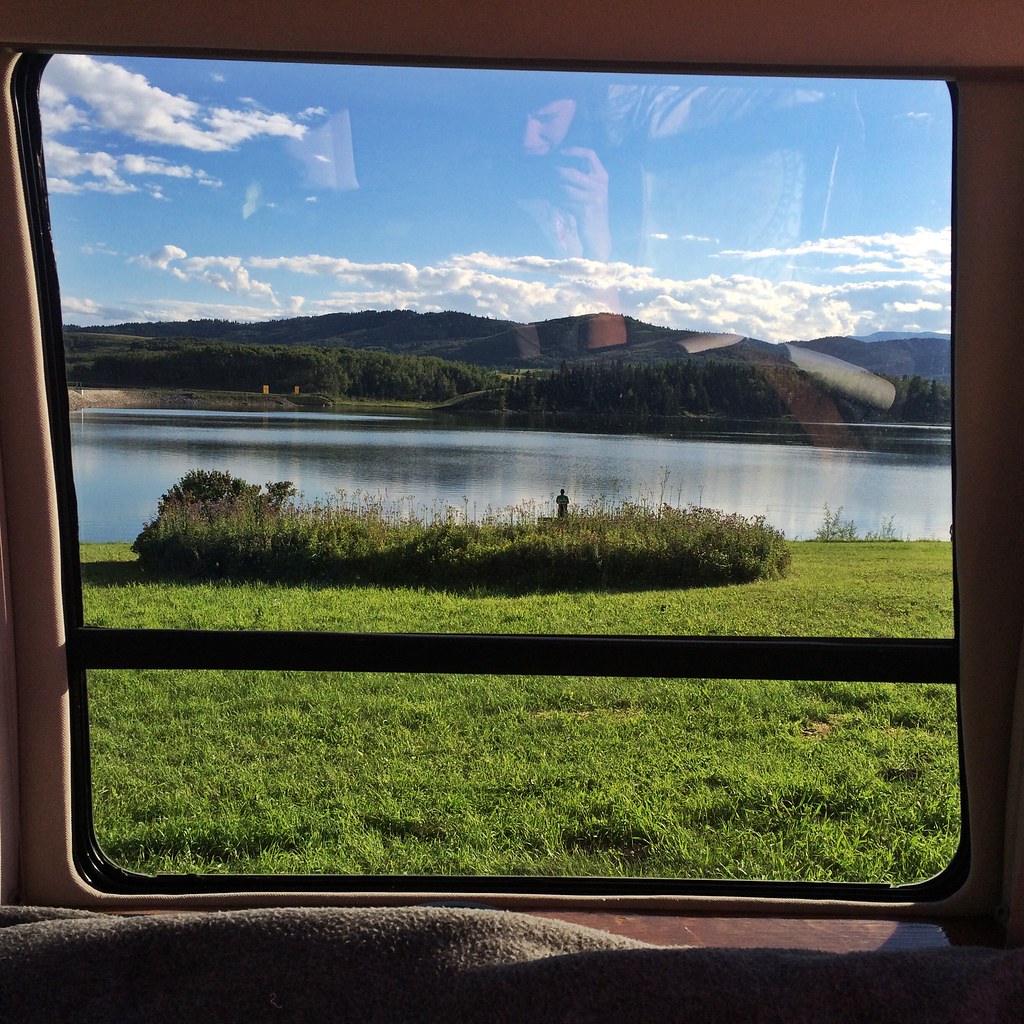 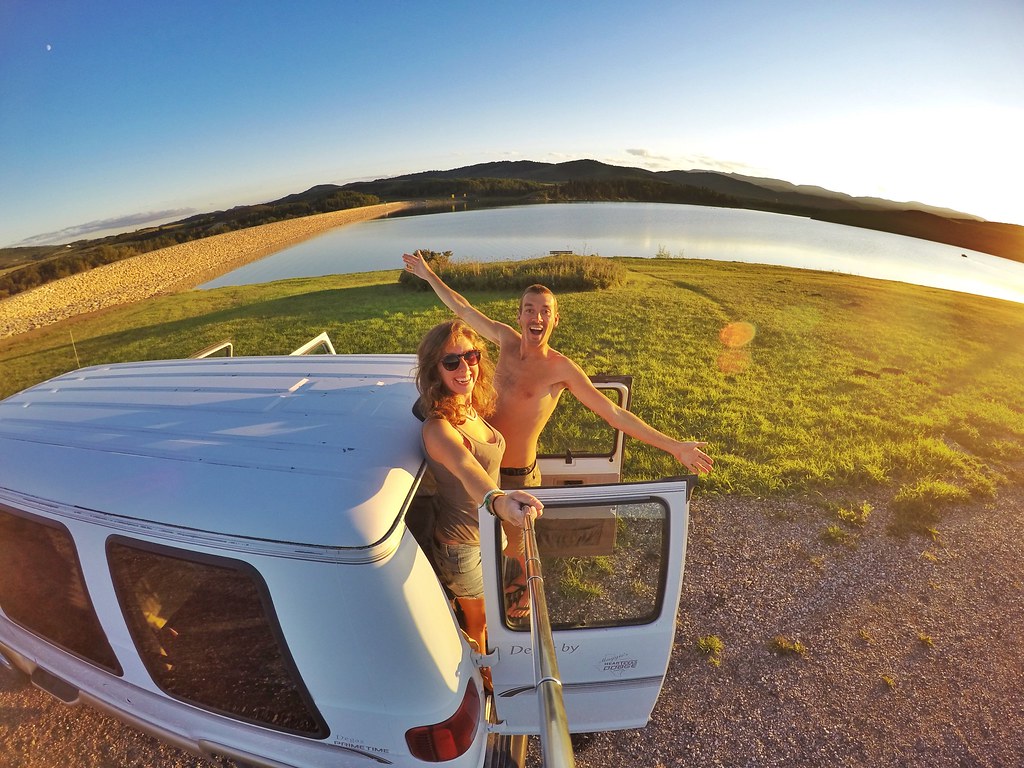 The next day we left the foothills and cruised along the flat prairies. In the small town of Nanton we bought some groceries and spotted a miniature cowboy in the carpark. It was a four year old boy dressed like a genuine cowboy, not a cartoon one for a fancy dress party but all genuine gear, like vintage leather cowboy boots, denim jeans, the worlds biggest belt buckle, a red checkered shirt, cowboy hat and rope in hand. I had to ask the mum for a photo and she happily obliged but the boy got shy and hid between two cars. I asked the mum if it was a special occasion “oh no, he wears this everyday except for football and camping, he’s held a rope since he was one” I just laughed, man imagine a kid doing that in England, but here its so normal. The mum managed to encourage him to show us his roping skills and he clearly couldn’t resist. His tongue was stuck out in concentration as he professionally swung the rope around his head (hitting both cars on either side of him) and then attempting to lasso his baby sister in a pram. 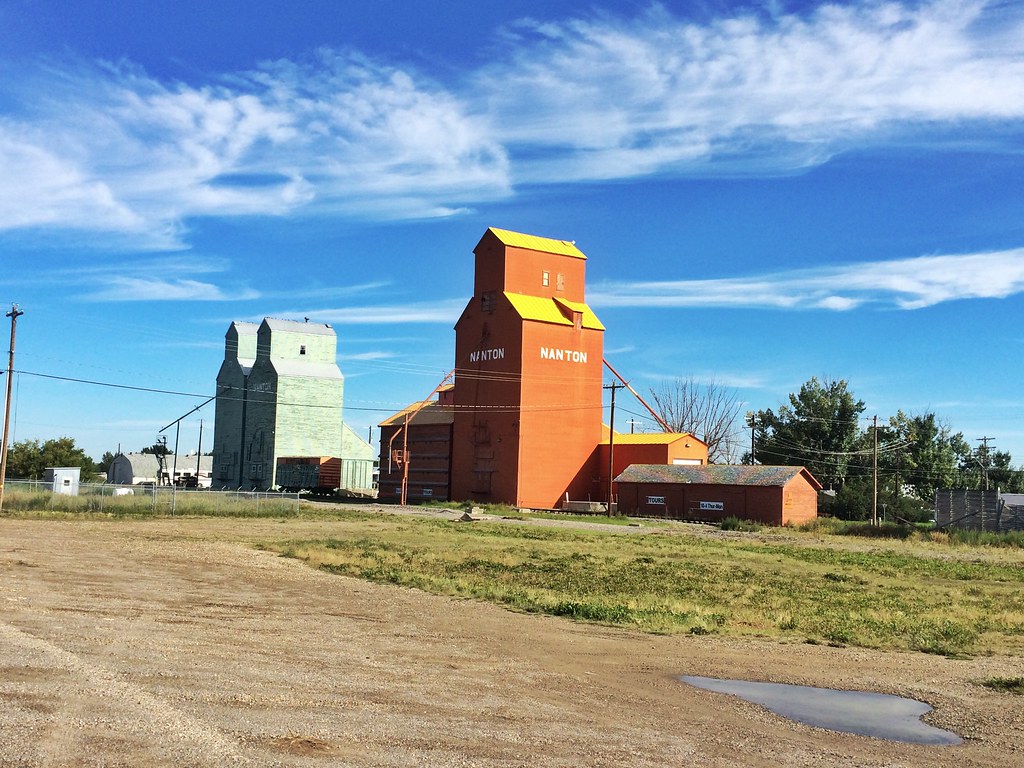 We made it to Little Bow Provincial Park where it was a hot Saturday and the place was packed. I stepped up to the shore excited for a refreshing dip and my face suddenly resembled the look one gives when they smell shit. What the fuck is this place? The designated swimming area was full of kids playing in multicoloured rubber tubes and the place resembled a bowl of fruit loops floating in chocolatey milk. It was disgusting brown water and it only got worse as we waded in and my feet squelched through mud. How on earth was the place so popular, how did everyone look so happy to be in a muddy pool which was probably now filled with lots of baby urine? 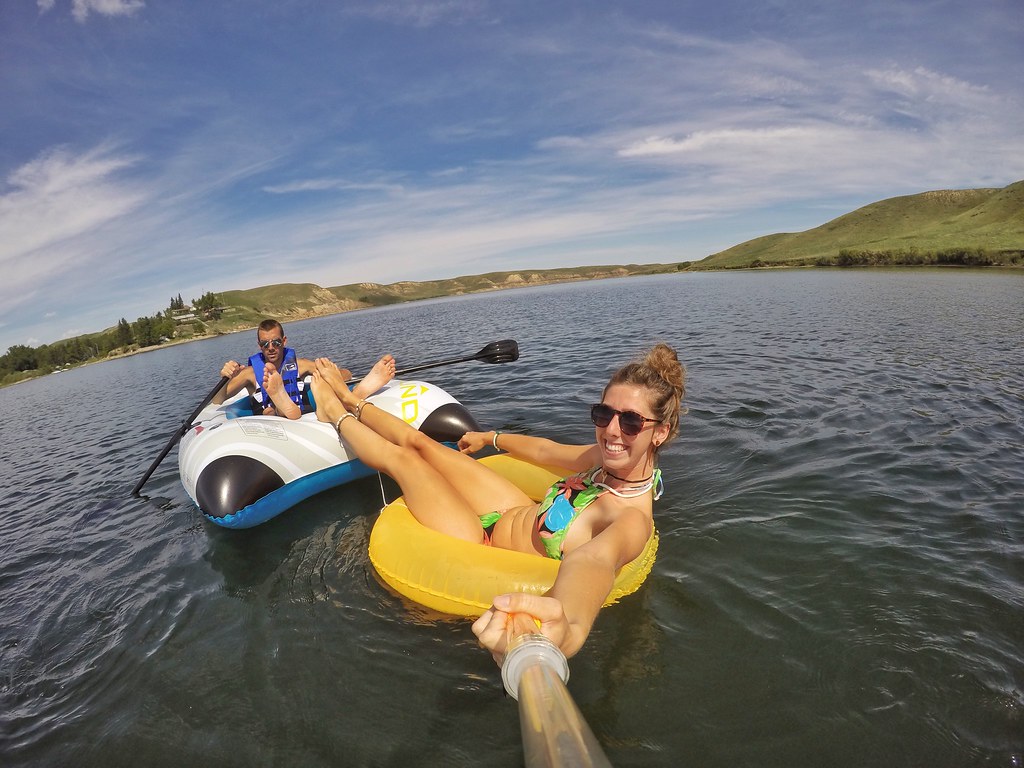 We waded across to the other side and hopped into Roland. Before we could get going we had to paddle over a surface covered in weeds and reeds and eventually the water cleared up. It was still a really creepy lake but at least we could see a meter down before it became dark. Ironically it was the first lake we’d brought along my rubber tube… We thought we could try doing the worlds slowest ski biscuiting but I was paranoid about getting in the water and Craig was pissed off that I’d brought it along and wasn’t using it. So when we got closer to the other side of the lake I reluctantly sunk my bottom into the tube and panicked. The tube was attached to a rope and tied up to Roland but I was swinging from side to side in the wake of the professional ski biscuiters plowing past us. It took me a while to settle down and let my legs sink into the water but I braved it and even went through a weedy patch to reach yet another muddy shoreline. Man that lake was shit!

That night we managed to find a little pull out to camp along a country road. There was nowhere else to stay so we risked it and an old guy came by on a quad bike. He smiled and nodded at us so we figured he didn’t mind us pitching up there for the night. It was such a quiet road and we were surrounded by farmland and the intense sound of crickets. Sadly the area was full of flies and they were flying all around Daphne and landing on us, I sat there feeling like I was a lump of dog shit on a hot summers day. Our fly zapper got some good use though, we learnt new techniques and our van stank of burning insects until the sun went down and we locked up and fell asleep. 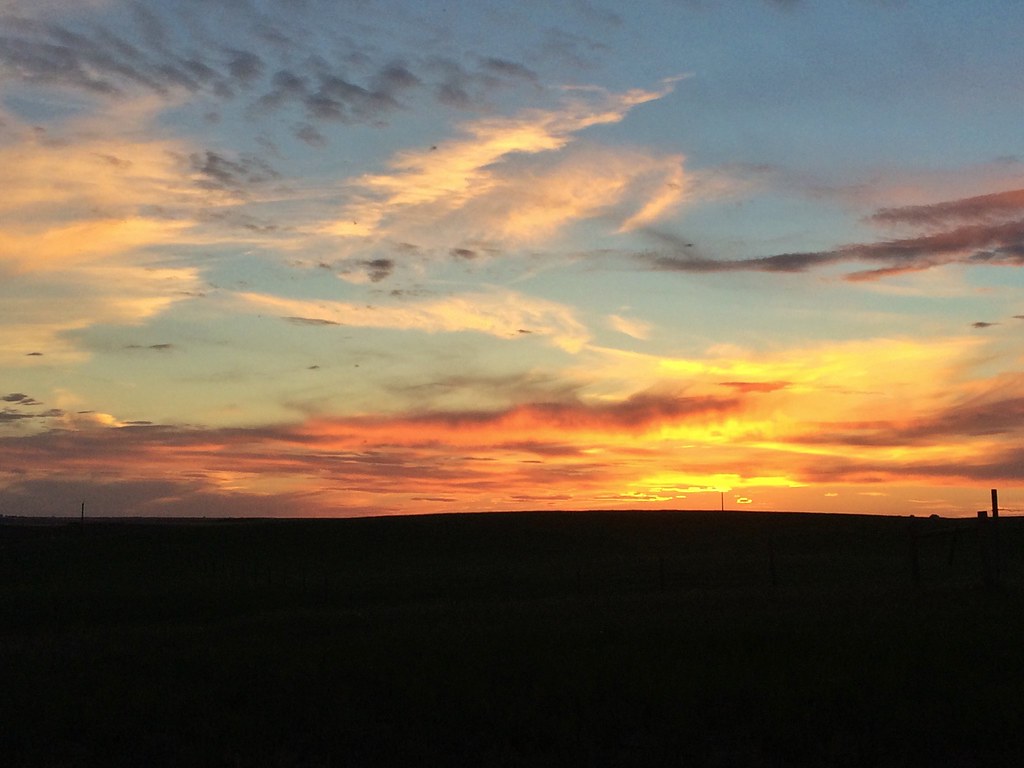