The weather was miserable for our second day in K’country so we did a bit of a drive hoping to see some wildlife. Big areas along the road were closed off with yellow tape and big bear photos so we scanned the bushes for any signs of life.

There was a break from the rain so we headed to Spillway Lake to take the boat out for a spin. It was about 5km along the other end of the Spray Lakes road which we’d attempted to drive the day before but much to our surprise the road changed to tarmac so we were happy as Larry and pulled up along the lake shore. As soon as we set off in Roland it pissed with rain and I snatched the oars off Craig and began pathetically paddling back to the shore. Craig (the persistent bugger) had other plans though and said he wanted to wait the rain out. We got a little wet but eventually the sun did poke out for a bit and it became rather enjoyable. It was a really quiet area and the lake had forest and berry bushes around its edges which looked like an ideal area to spot animals. We could hear a wolf howling far away and managed to venture around the whole lake. The water turned a fabulous clear green colour with patterns of darker algae along the silty floor. When we finished paddling we decided to continue driving up the road while the going was good. The tarmac quickly finished though and the washboarding gravel began shaking Daphne like a maraca so we hastily turned back. Evil road. 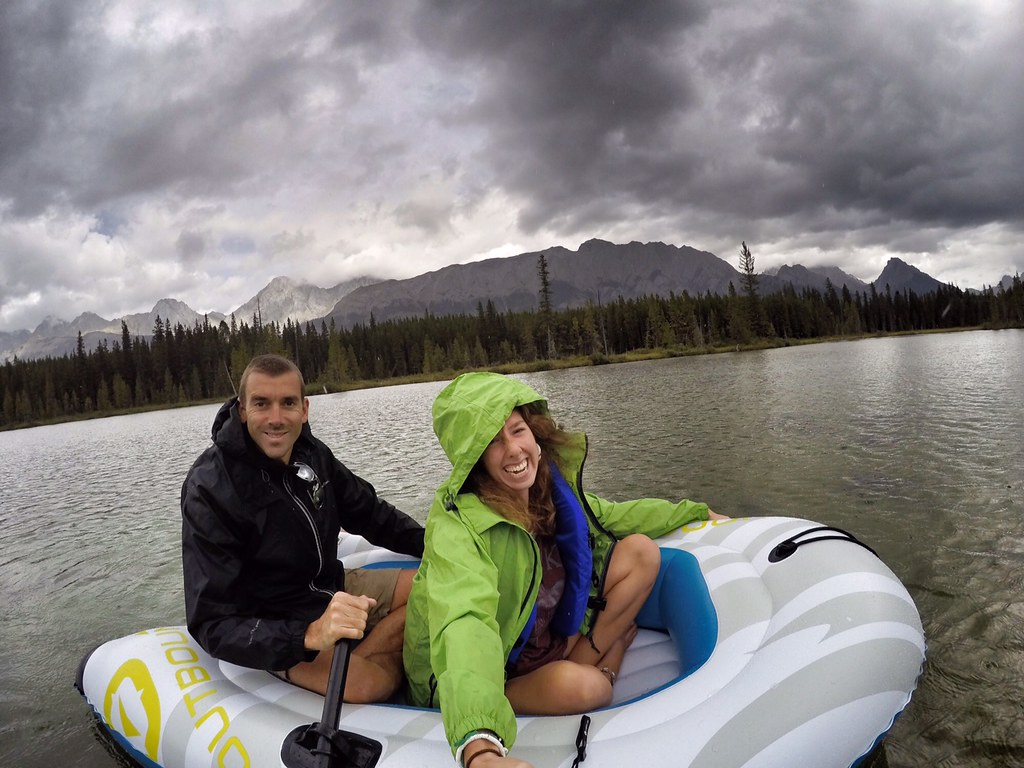 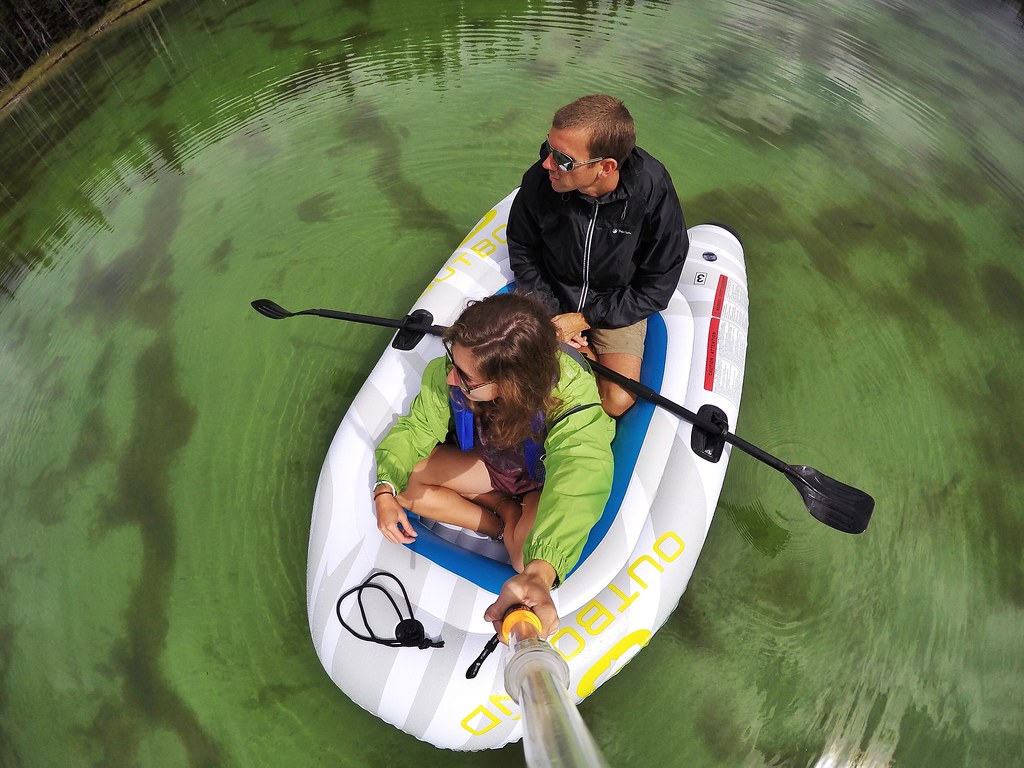 Instead of that adventure we drove down the Interlakes Road stopping for lunch at a picnic area high above Lower Kananaskis Lake. We both instantly recognised the spot; we’d come to this very carpark in 2010 for a solar shower. Surprisingly it was just as empty on a summers day as it was in chilly autumn. When we drove here last time a coyote had come right up to our campervan looking at us through the windows. I guess stupid tourists had been feeding him and he was used to begging, but of corse we didn’t comply and drove to the other end of the carpark for our shower and he vanished. Towards the end of our wash we had three coyotes coming down a hillside approaching us and we both hid inside our van like big girls.

We couldn’t avoid staying in a campground in k’country, there were strict no camping signs in every carpark or pullout and the high presence of rangers put us off risking it so we headed to the Interlakes Campground. It’s set on a narrow bit of land between the Upper and Lower Kananaskis Lakes. Thankfully after scanning the bush line all day we spotted our first grizzly bear in Canada! It was better than that though, she had an adorable cub with her! They were both picking berries like there was no tomorrow, moving from one bush to the next. The cub looked very different to its burnt orange coloured mama, she had quite grey fur with pure black legs. Occasionally she’d stand to reach berries or just sit down and munch away. We couldn’t believe the size of the mamas claws though, they were a beige colour so stood out from her dark fur and they seemed to just go on forever, like she’d just had a manicure with very ambitious extensions. It was like watching Edward Scissor Hands, like she didn’t even know where to put them and they kept getting in the way. I bet the Cubs had some accidental pokes to the eye. I read a few weeks ago about a bear attack in Alaska and how the bear swiped the mans ankle slicing open his boot!! Now I can see how! 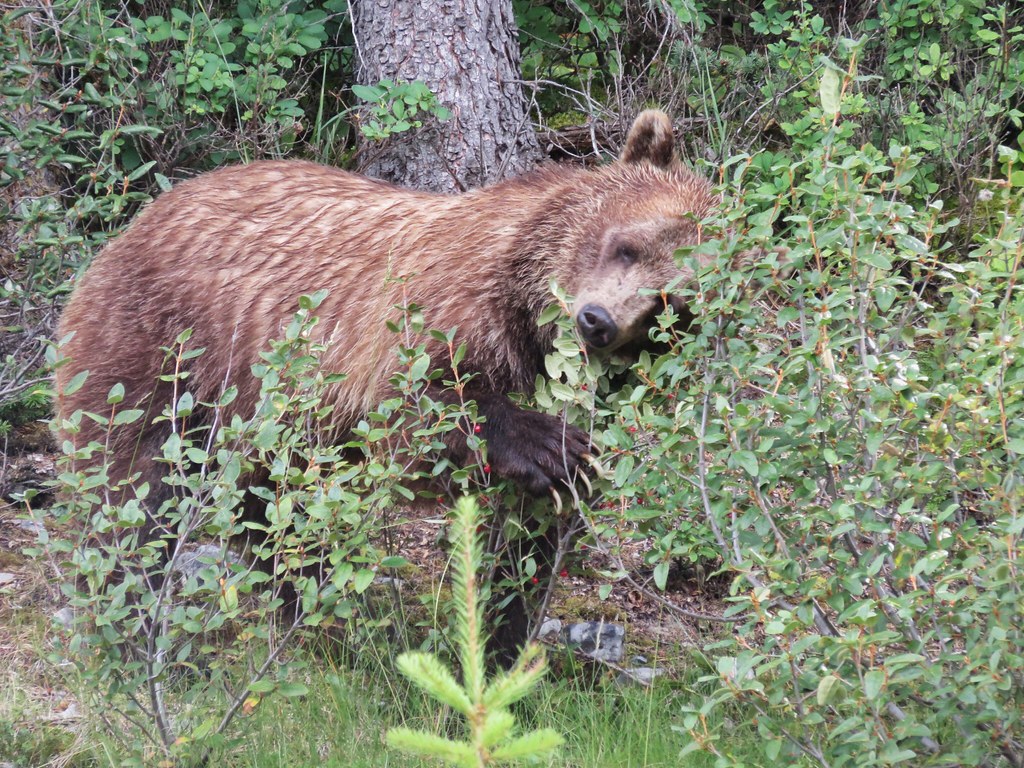 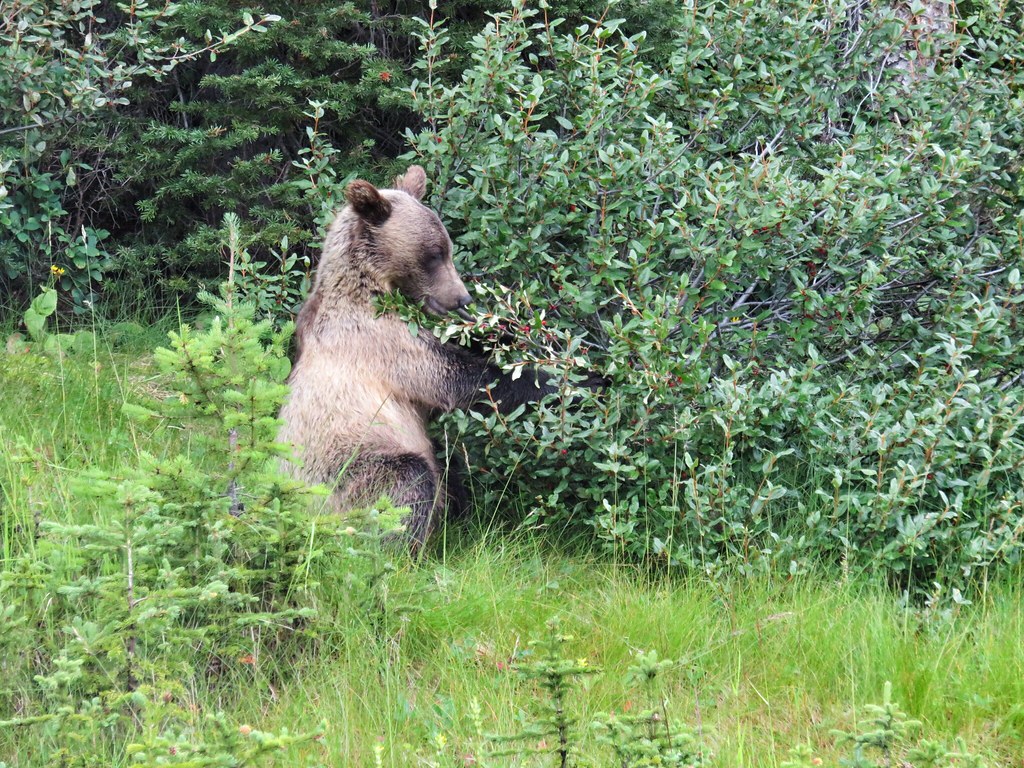 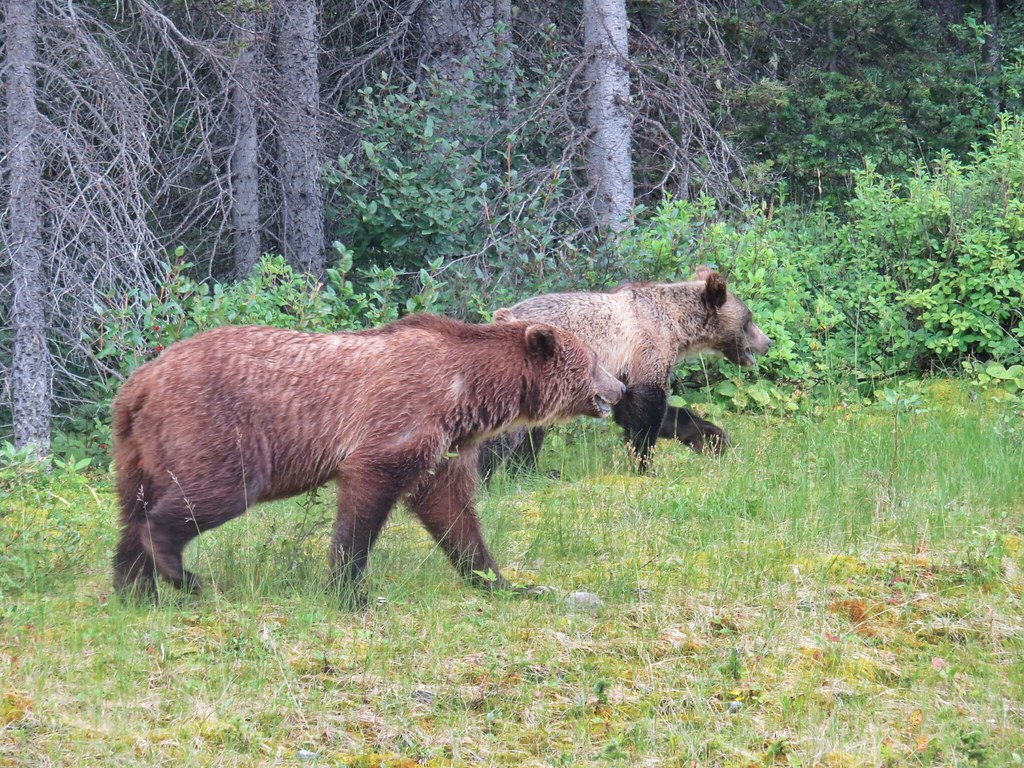 They were fascinating to watch and unlike Banff we had the viewing all to ourselves for the first 10 minutes. They were slowly coming down towards the road and two cars pulled up to watch. The one behind us suddenly decided to leave and overtook us causing the mama bear to wonder what was going on. So she did something we’ve been wanting to see for so long, she stood up! It was only for a couple of seconds but it was incredible to see a grizzly standing 6ft or so tall. After seeing the danger of the vehicle she abruptly crossed the road while the cub was still obliviously eating berries. What shocked us though was that the car didn’t wait for the cub to follow, she drove through separating the mum and cub which we thought was beyond stupid. Luckily the cub crossed the road afterwards and they both scarpered into the woods. Everyone left but we spotted them coming out the woods so we watched them from quite a distance and another car pulled up just as the Bears vanished again. We told them they’d gone into the woods and they said “right towards the campground then”. We had no idea the Bears were so close to the campground, that’s the one we were about to check into! It began pouring with rain so we drove down to the campground and pulled up in one of the only available spots. Amazingly we could see through the woods where the Bears had been, just 30 meters behind us. It was crazy! There were people in tents and families sat outside with tables covered in food and junk, scents from barbecued meat were floating through the air and it seemed so unbelievable that Bears were so close by. The campground was set in a lovely location and albeit we didn’t get a lake-side spot we had no neighbours close by and a trail led down to the shores of Lower Lake where the mountain range reflected in the still water. The next morning we drove up the road to North Interlakes where a bridge over a dam offered beautiful views of the upper and lower lakes. It was a rather cloudy morning still but nice enough for a paddle in Roland. The whole eastern side of the lake shore was closed because of Bears and interestingly the signs said it was because a Grizzly sow and cub (the ones we saw yesterday I guess). We noticed Roland had a small puncture on her seam yesterday but she wasn’t losing much air so we took precautions and packed our bear spray just incase we had to swim to the shore and battle a grizzly. 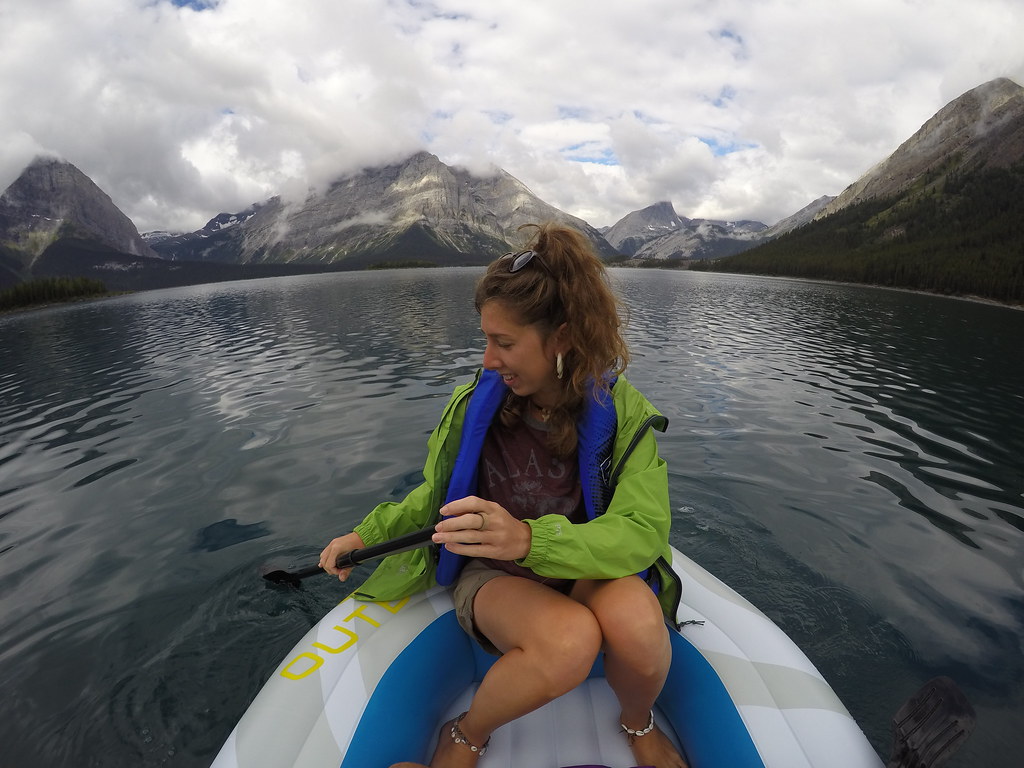 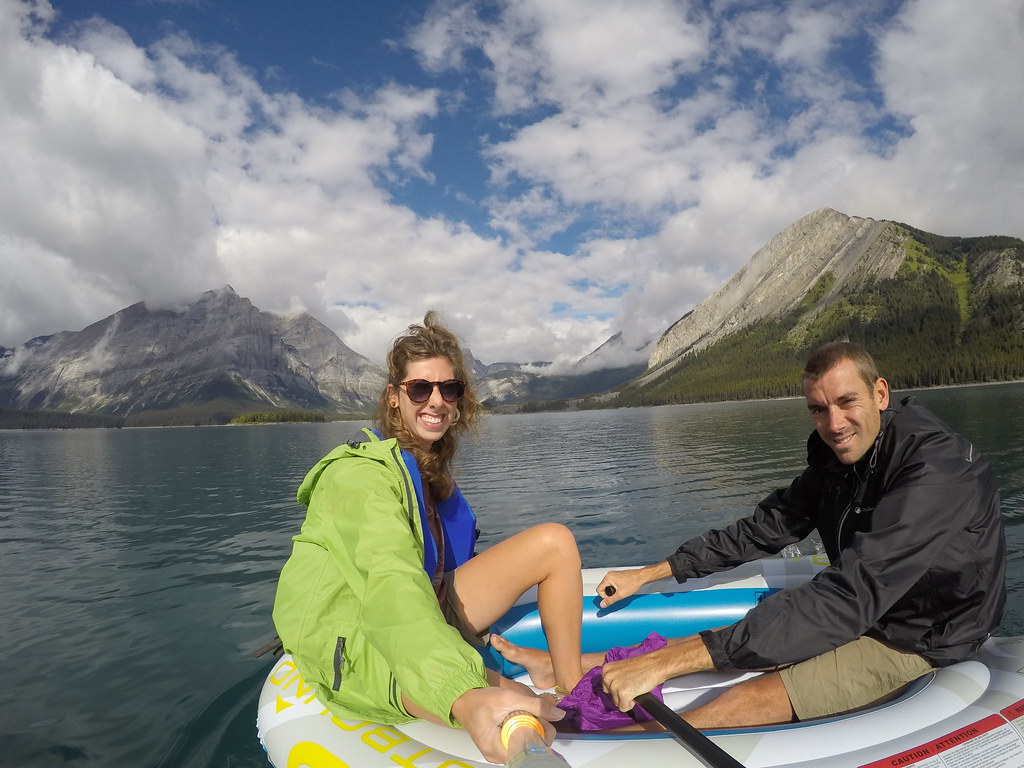 We were the only people on Upper Kananaskis Lake and it was lovely and relaxing. The lake was dotted with a few forested islands which we circumnavigated making us feel like early explorers. At the far side of the lake a waterfall plummeted down the mountain-side and clouds drifted around dramatic peaks. 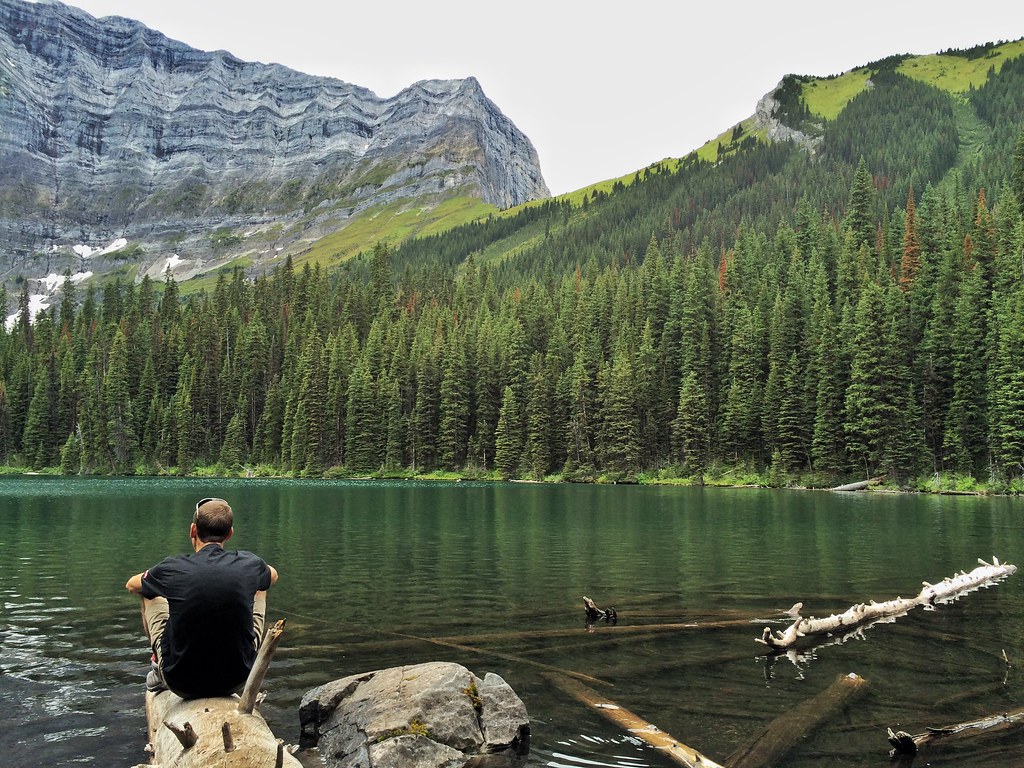 When we left the carpark a man pulled up beside us and said a bear and cub were coming close to the carpark so we hopped into Daphne and drove down. He got his info slightly wrong as it was actually just a lone grizzly who was tagged as number 139 and had a tracking device around his neck. We were really surprised to not only see him so close to civilisation but to see him so close to the Sow and Cubs grazing ground. Bear 139 had found an area full of Buffalo Berries and was much more meticulous than the mum and cub. He was working his way around each bush making sure he got every single berry, clever boy! 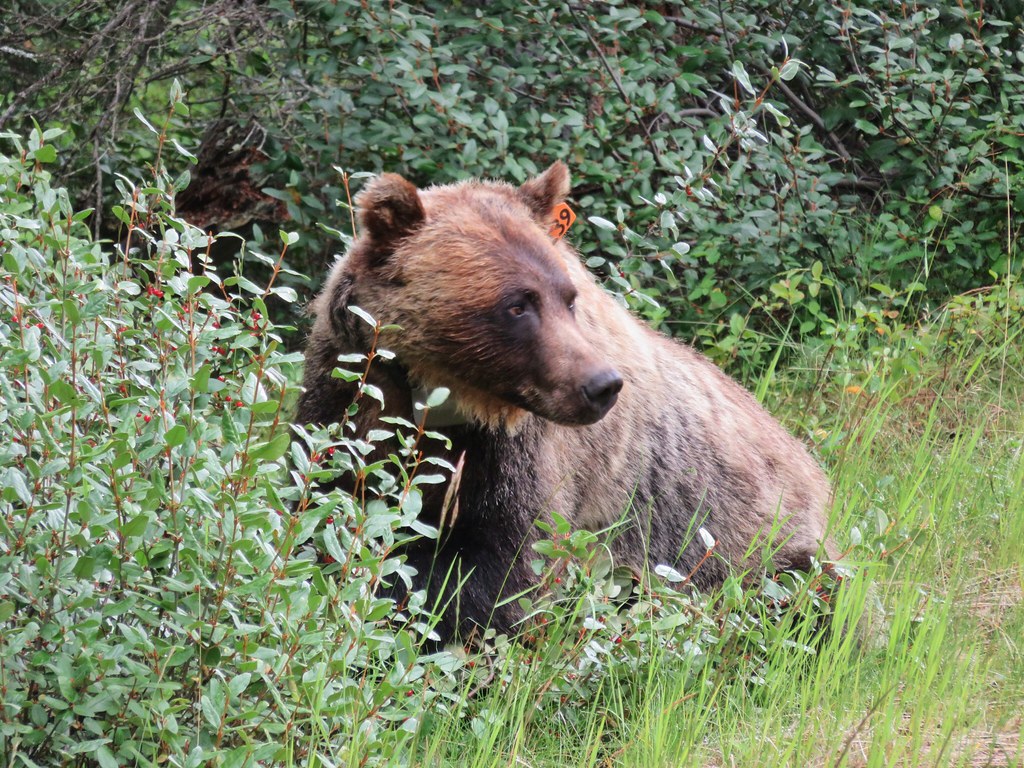 After a while it became apparent that the bear was heading straight towards the carpark. We reversed around the hill where the carpark came into view and people were oblivious that a grizzly was just walking along the hill-side towards them so we reversed all the way back and told the people what was going on. Of course they didn’t do the sensible thing…instead of getting inside their vehicles one guy got his 8 mates standing up in the back of his pick up truck and drove them to the edge of the road to photograph the bear. We left him be and set off to a different area of the upper lake to do the Rawson lake hike. The path was lined with mushrooms including a really bizarre one which was like a beige sponge with almost blood dripping out of its pores. It could quite easily pass as a gruesome Halloween sweet. 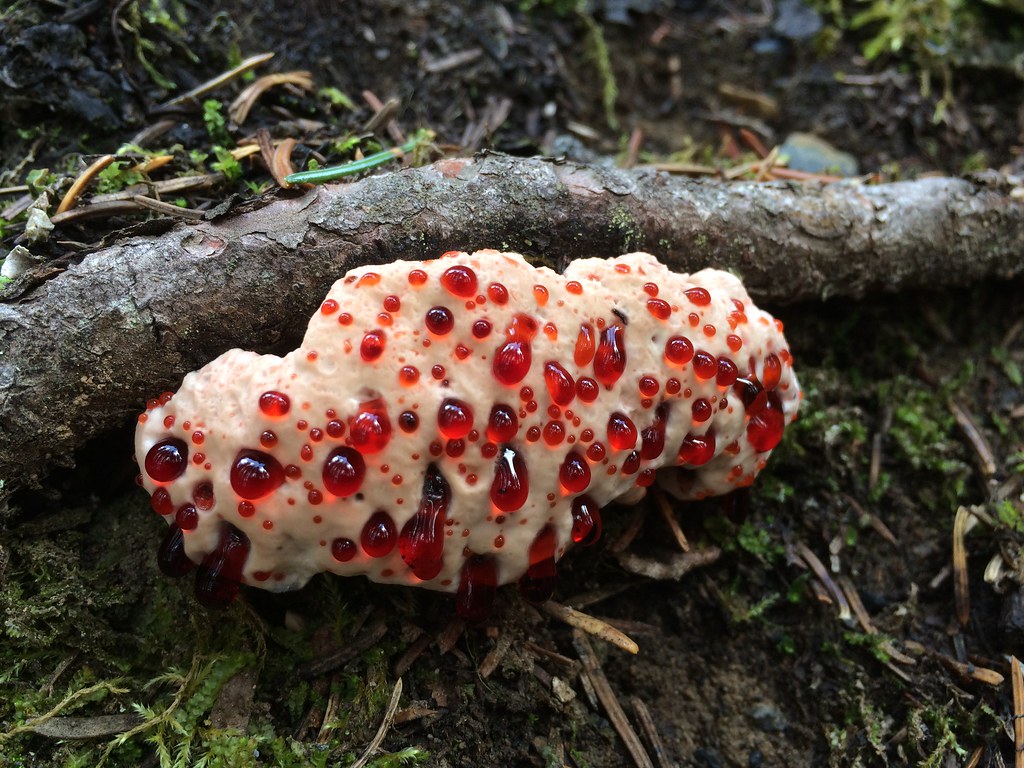 We got back on the road and headed south past bright yellow meadows, big horn sheep and lots of bear skat along the road. The main highway led us up the highest pass in Canada, Highwood Pass at 2206m. We wanted to hang around the area and do some hiking but it was a tricky place to park up and wild camp. Luckily after a few kilometres we left the provincial parks and hunting was allowed so we figured if hunters can shoot, we can camp. 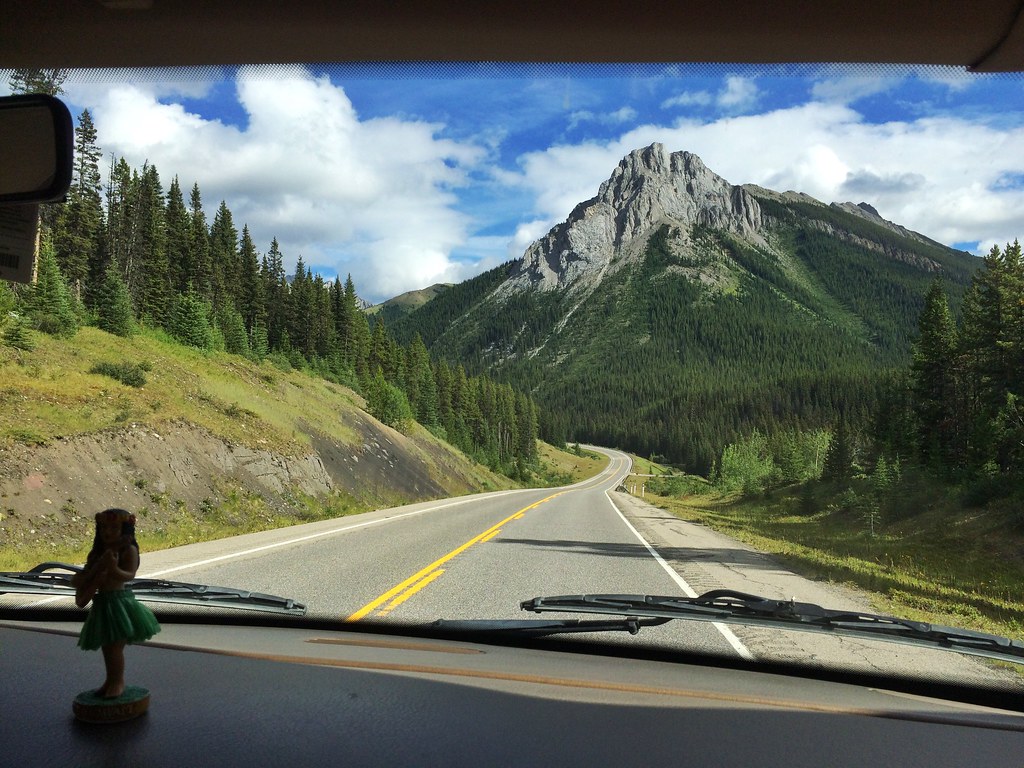 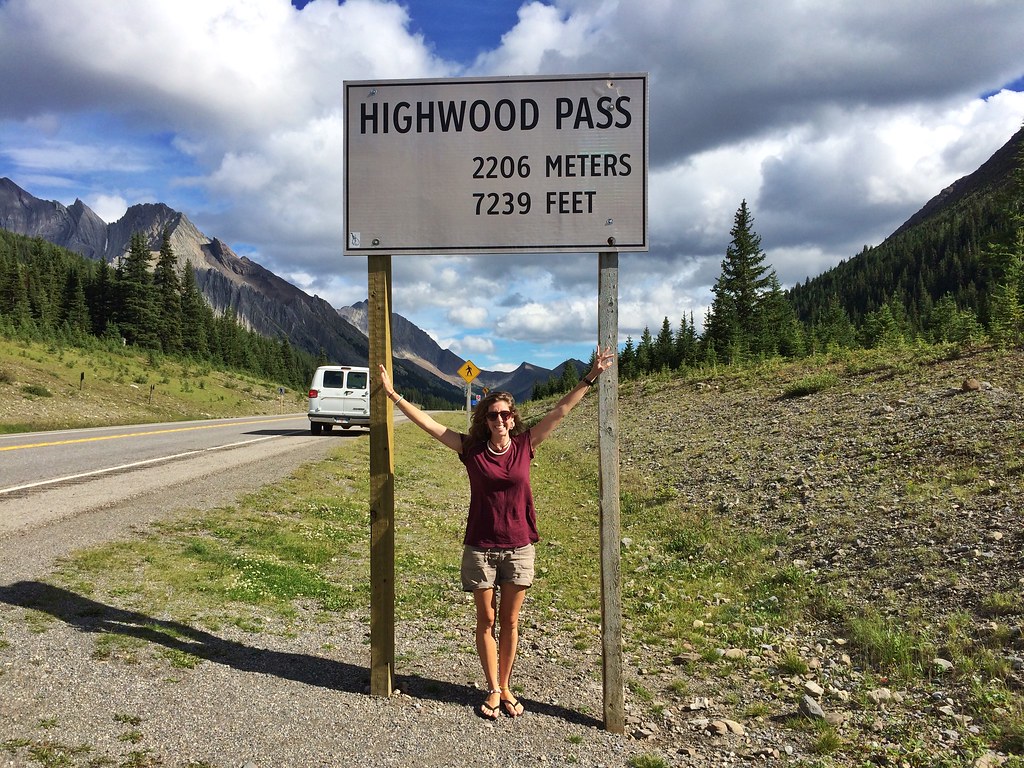 The next morning we were up super early and headed back to the pass where we enjoyed pancakes before putting our hiking boots on. There was no one else around so we were a little nervous about hiking with Bears but thankfully a lone muscly man turned up just before we set off and scared any wildlife away with his bells. The Ptarmigan Cirque trail was a piece of piss, a simple 5km loop, one of the shortest hikes we’ve done in a while. It climbed up till we were in the alpine area with ground squirrels, wildflowers and mountain views and crossing two streams. We actually had to wait for the sun to rise over the mountains behind us before the view across the valley was in full glory. Now it’s time to head south to the foothills into true cowboy country! 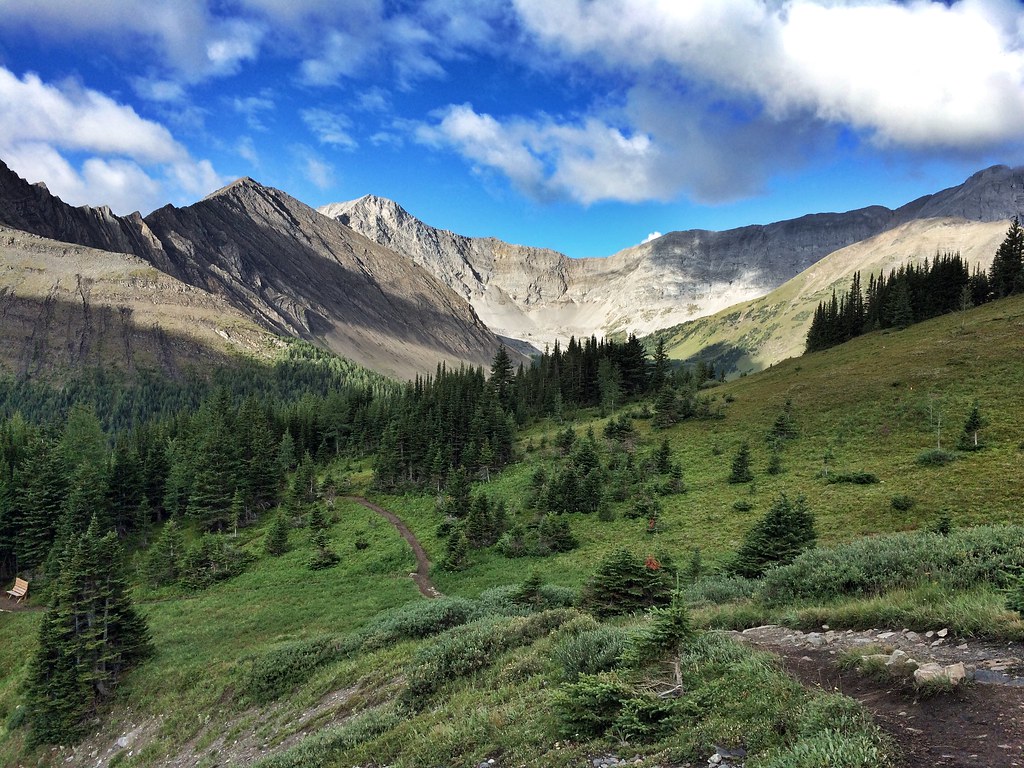