Kananaskis country, or K’country as the locals call it, is like another world compared to its neighbouring Banff National Park. It’s an area of provincial parks combined together to make a wonderful, tranquil, wilderness. Few people venture this way and that’s what makes it so special. The scenery is as good as the national parks, although without the milky turquoise lakes, but the roads are quiet, there’s no tour buses or trucks and bears rule the area.

We were pretty shocked when we asked the info centre in Canmore to recommend hikes throughout K’country. The young chap said “well, I’ll start with the ones you can’t do” and he got a permanent marker out and started colouring in big areas of the map. The buffalo berries have been so abundant this year that the bear sightings have also been much higher than normal. There’s been numerous bluff charges by Grizzlies, a couple picnicking by a river were charged and attacked by a mama bear and recently a black bear pushed a lady off her bike just a few kilometres from Canmore town centre. So understandably the authorities are trying to prevent any more attacks and have closed a ton of areas. 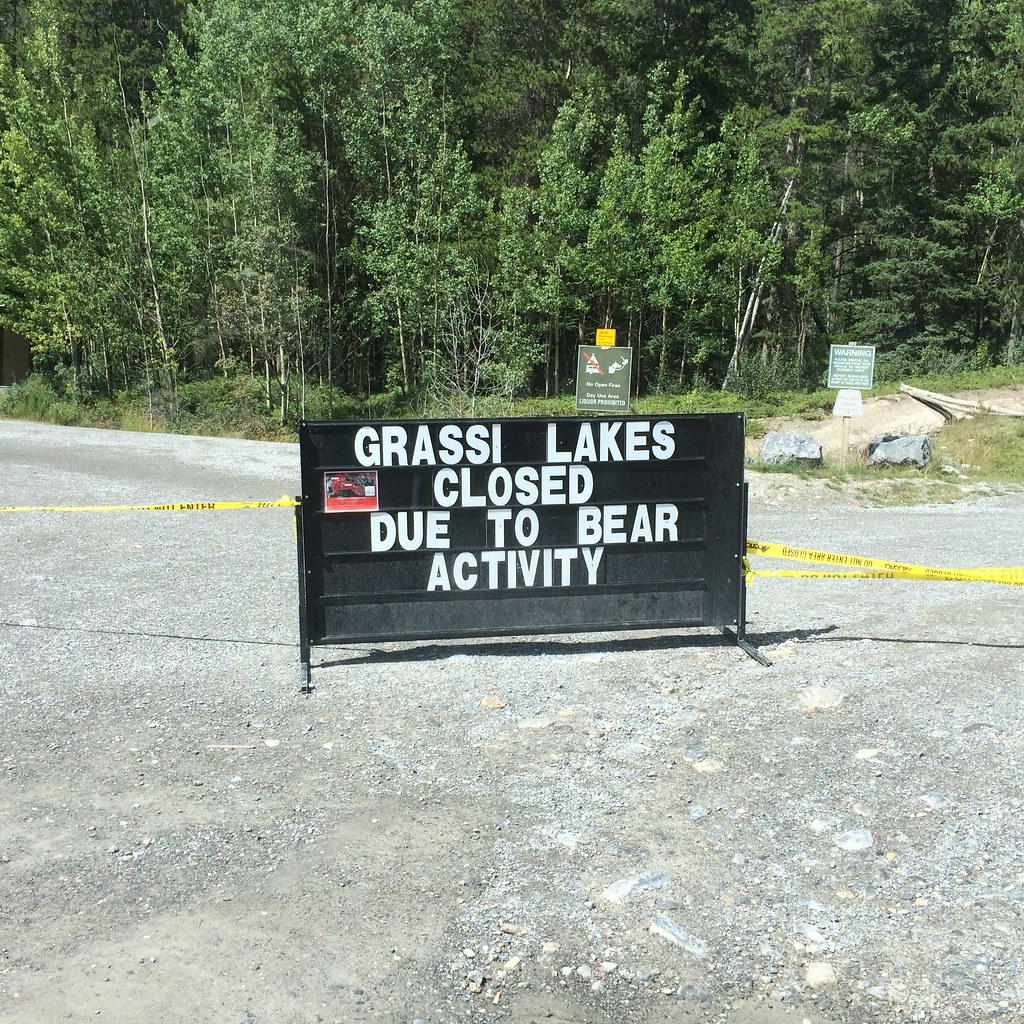 The info guy also told us to take the Spray Lakes Road, a gravel road through the parks which is much more remote and according to him “very good quality, it’s 80kmh to give you an idea of how good it is”. So we set off and before we got going anywhere we pulled up at Grassi Lake. While in Canmore we got temped into the idea of buying a boat. We’d wanted to go canoeing in the national parks but it was $75, Yoho was cheaper but the weather wasn’t great so I was a bit gutted. Amazingly we found an inflatable row boat including oars for just $35 so gave it a go. 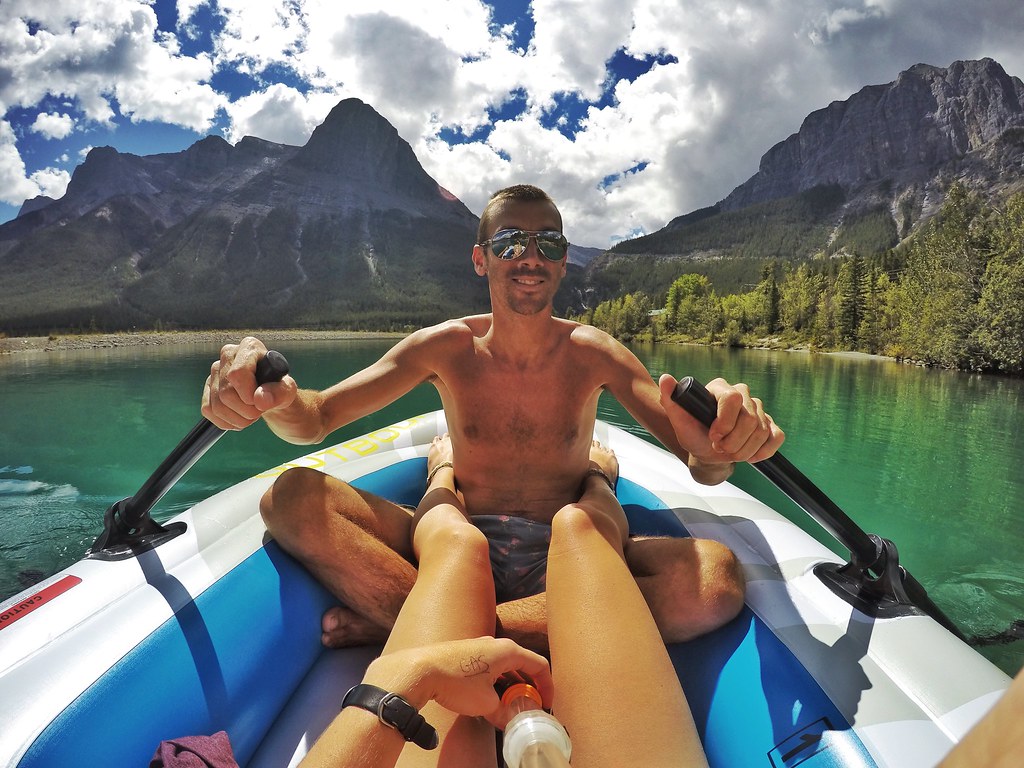 Grassi Lake was the boats first staging point and there was quite a bit of commotion in the area. A big sign said area closed due to bear activity and there were police cars and search and rescue vehicles. This is where the lady was pushed off her bike so we wandered if another attack had happened and asked a policeman what was going on. He said there are 9 Bears active in this area which is pretty crazy, but all the search and rescue vehicles were in fact for a base jumper who had blown into the side of the mountain!!

Grassi Lakes was surprisingly cold, but luckily the boat floated and we set off for our first paddle. It was delightful!! We got to explore areas that people on foot couldn’t and the mountain views were just beautiful. We were so chuffed that we named the boat, she is officially known as Roland the Row Boat. She’s a bit on the small side though and we think the box meant two tiny children as appose to two adults but she’ll do. 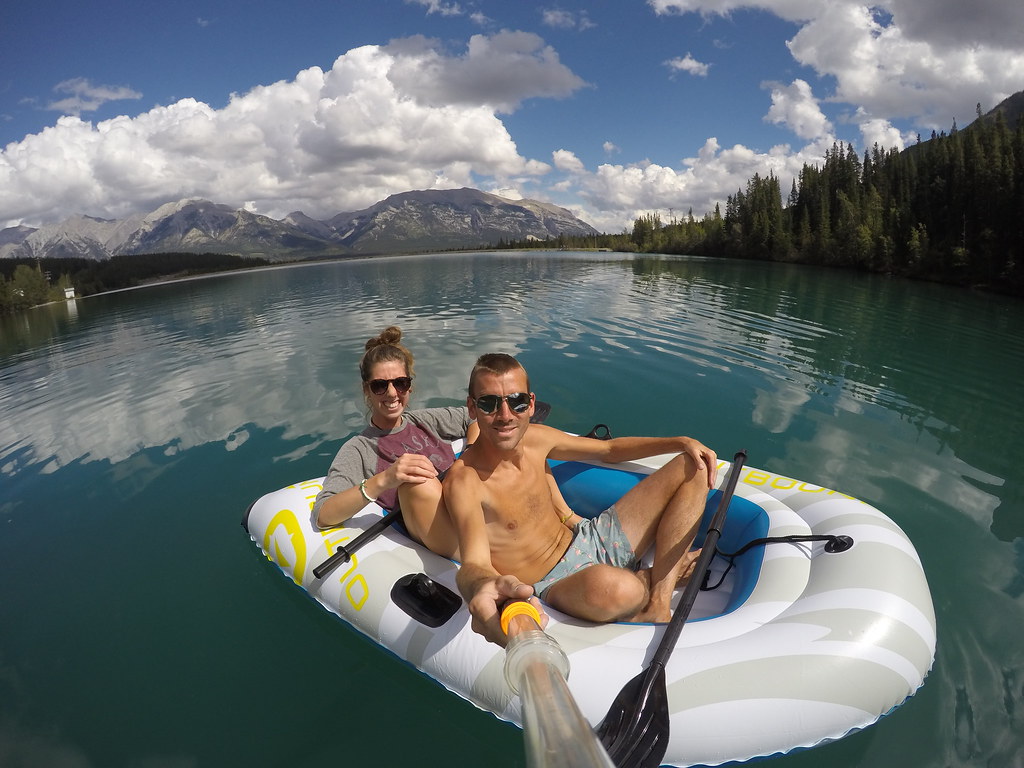 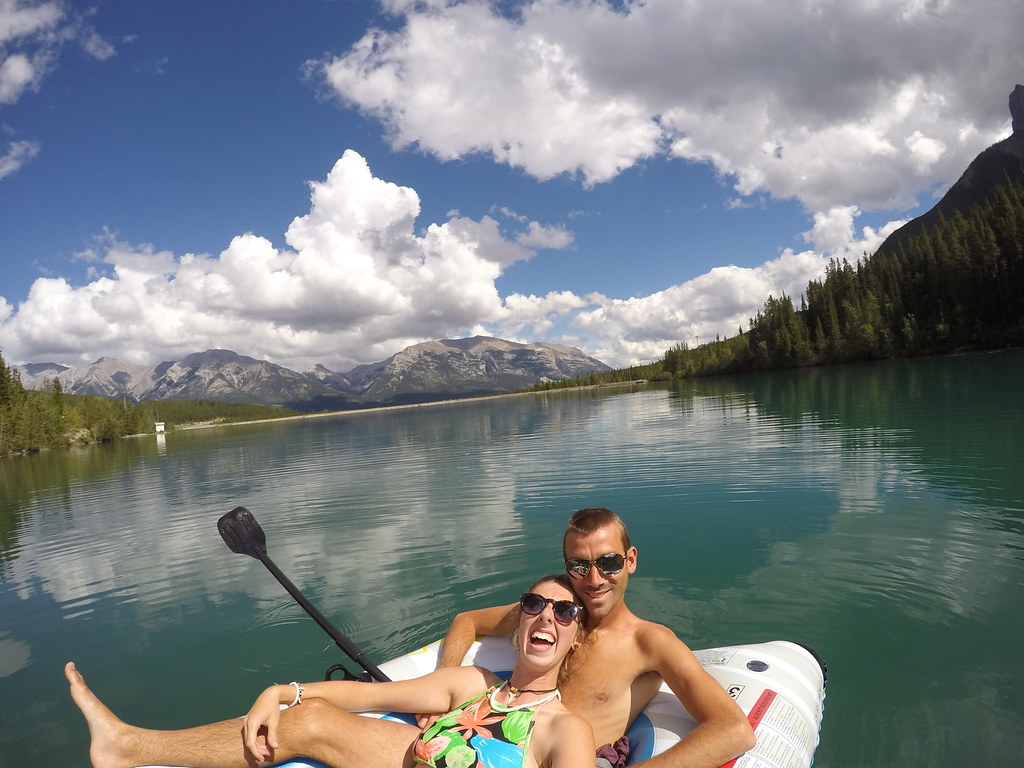 While we were paddling a helicopter began circling above us and then went behind the mountain, rising again 5 minutes later with a person lying flat in a rescue style bed and hanging from the helicopter. I hope they were OK!

We were told the first section of the Spray Lakes Road was the worst so we persevered up the steep hill along the edge of a mountain and landed on a plateau. Sadly the road didn’t get any better, it only got worse. We kept driving on hoping it would improve but after 20km we had to give up. There was no break from the horrendous washboarding and then pot holes took over the entire road and we couldn’t avoid them and it was just awful. I’d go as far to say it was the worst road we’ve ever driven. And we were so pissed off as it sounded amazing and wild but we’ve already spent enough money on Daphne and need to get her to Florida without having to sell any organs so we couldn’t go on. We did however enjoy a scenic dinner by Goat Pond where we could hear wolves howling across the lake. I absolutely love the sound of wolves howling, it’s natures way of saying, your in a pretty fucking remote spot, enjoy!

We stayed the night near a dam and woke to a cracking view. The scenery really was spectacular along this road and all the mountains were reflected in the water around us. As we drove off back down towards Canmore a bloody tractor came along to grade the road…seemed like a rather overdue job! There was no point waiting for him, it would take ages to do the whole road and from what we’ve heard a lot of big rocks can be unearthed and we certainly didn’t want another smashed windscreen.

So we took the main highway 40 through the area which was still a delightful drive with hardly any traffic and we soon saw a couple of white tailed deer crossing the road ahead of us. We stopped at Barrier Lake to do the Prairie View hike which is about 12km and loops up to get mountain and prairie views, which sounded rather nice. There were a lot of bear warnings at the trailhead saying two grizzly bears have been seen eating berries in the day use area. We really didn’t want to see a bear while hiking so we both had our bells on, chatted the whole way and Craig gave out a loud ‘HEY BEAR’ every few minutes. Occasionally we’d stop and listen and then continue on our way. When we reached a cross junction we inspected the map and both thought we heard a noise in the woods. It didn’t sound very close but maybe sticks snapping or bushes moving, but we blamed it on squirrels. As we headed up a hill and took a tight left turn Craig suddenly stopped, took a step back and said “There’s a bear!” He followed it up with “A black bear” so I actually felt a lot calmer, although saying that we saw three black bears on our last day in Banff grazing by the road side and they were all rather hefty so maybe a black bear isn’t much better than a grizzly. Craig had the bear spray at the ready in record time and waved his arm up with a genuine “Hey Bear”. I moved around the back of him and got a glimpse of the bear just 15 meters ahead of us along the path. We looked at each other and then he changed directions heading back up the hill. We also backed away and wandered if he’d come down the woods to our trail so we were still being very cautious. We’re very lucky he was a courteous bear and left the area, but we’re still surprised he hadn’t moved away after hearing all the noise of us coming up the path. We thought the safest option was to leave the area, we didn’t want to piss him off and follow him up the hill and it’s a loop walk so if the bear bumped into someone else in the other direction he could run our way. To be honest I was pretty exhausted after hiking 15+ kilometres for 10 days straight so a short hike was probably for the best.

So we headed back and took a slightly different route, passing a speeding mountain biker on his own and making no noise. No wonder Bears push people off their bikes it’s like their way of saying “why the heck didn’t you make any noise? You scared the shit out of me!!”. So we warned him and then a few more people we passed coming up. It’s amazing how much safer the hike would feel now with a bit more human traffic but we hadn’t passed a single soul before seeing that bear.

Anyway, the day was still young so we decided to take Roland out for another spin. We found a lovely area at Mount Lorette Ponds where clear pools trickling into one another. They were small pools so nice and easy for us to paddle around. We even reached a natural infinity pool where a beaver dam full of sticks had separated the two pools. The next pool we explored was just as clear but some areas had fluorescent green algae along the shallow shore. As we headed back to the carpark a park ranger asked if we’d got lucky, so we said we hadn’t been fishing and after a little chit chat he told us we didn’t have the right gear to go boating. Apparently to go on any Canadian water you need to have all of the following: Oars, lifejacket, rope, whistle and a bucket or cup to remove water if your vessel leaks. What the heck?! I can understand if it’s a motorised boat that can go big distances but we were in a little dingy. So we said what about these ponds (seeing as your never more than 5 meters from the shore and it’s very shallow), same rule applies. What about if I was playing in here on a rubber tube? same rules. That’s just stupid. So I’m allowed to swim without any floatation device, but if I take my rubber tube as a floatation device I then need an oar, lifejacket whistle, rope and cup. I mean c’mon!! I have a voice to scream and hands to scoop water away. But, the point is that’s the rule and if we don’t comply we could get a fine. So we reluctantly had to go back to Canmore to buy two lifejackets that cost more than our boat. We better get some good use out of Roland.