The Yoho Valley Road wiggled its way up a mountainous valley and was a beautiful Sunday afternoon kind of drive. It was all going well until we were confronted with a rather intimidating section where the road suddenly headed up the side of a mountain via a couple of switchbacks. So we slowly proceeded up trying to keep momentum while going steeply up hill but at the same time having to awkwardly stop for a vehicle struggling to turn around the bend. Then came our turn and another vehicle was coming round the bend at the same time so we had to slow right down and ended up having to stop, reverse and turn more, it was absolutely crazy!! I’ve since heard that your supposed to reverse up the road! What’s even crazier is that large tour buses go along that road and I’m so glad we didn’t meet one of them on the switchbacks. 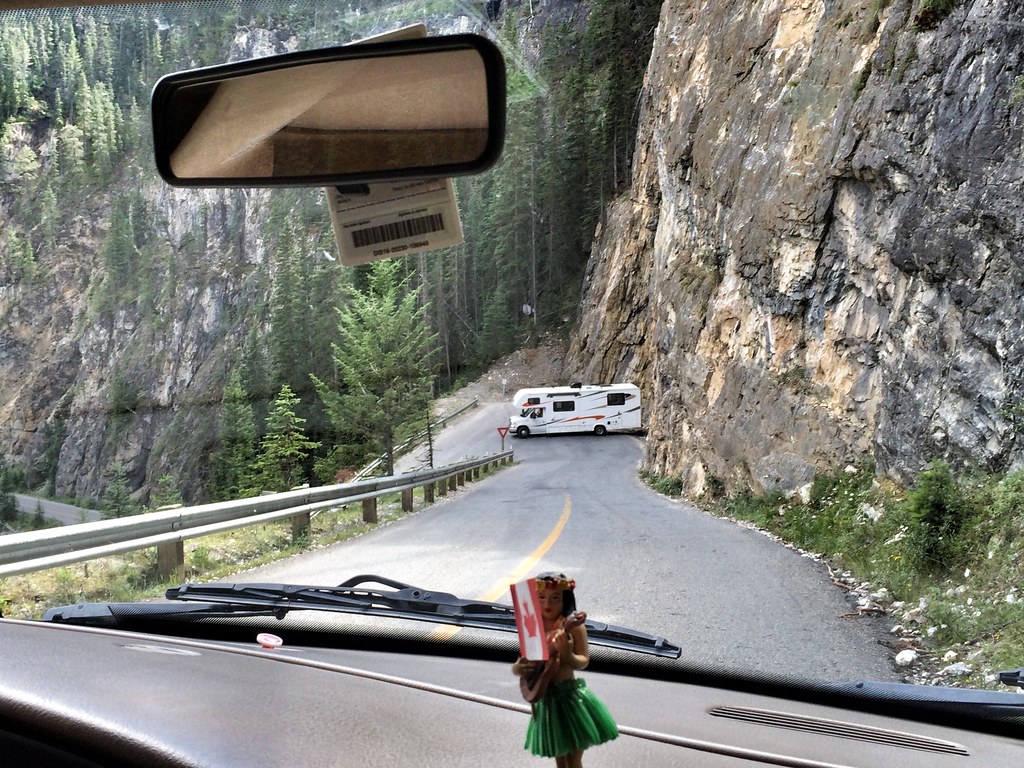 The route was worth it though as the Takkakaw Falls were incredible. They dropped down a cliff edge in four parts, the final one falling more than 300 meters straight down. Mist from the sheer power of the falls floated through the air and coated everyone in a chilly film of water. 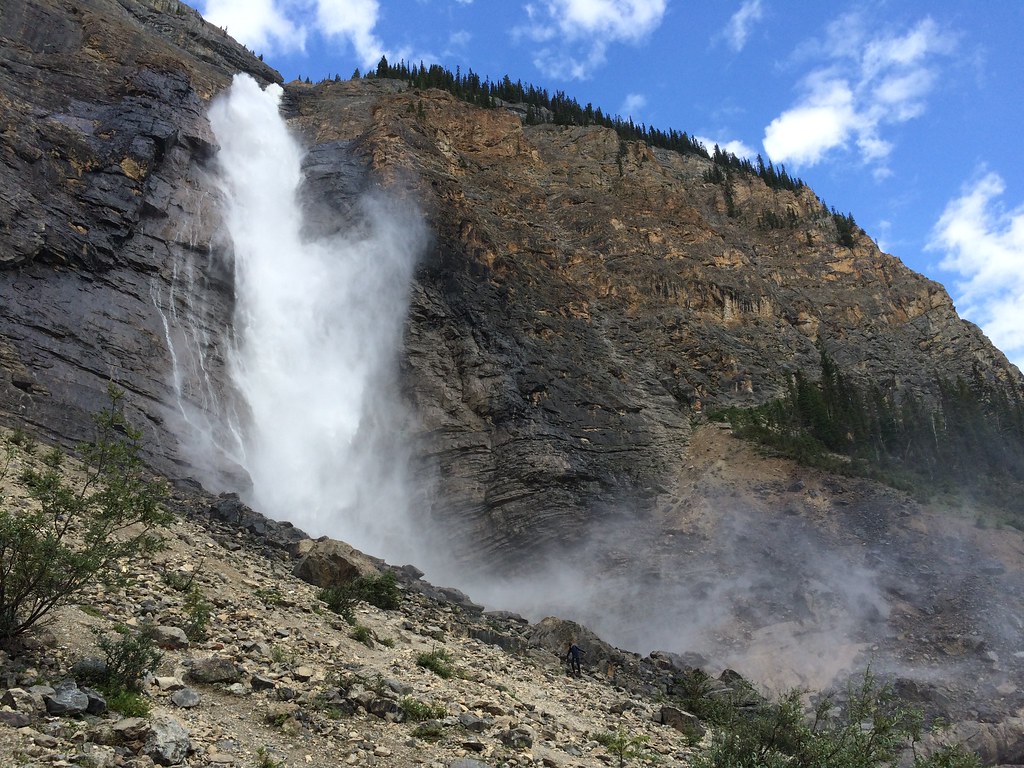 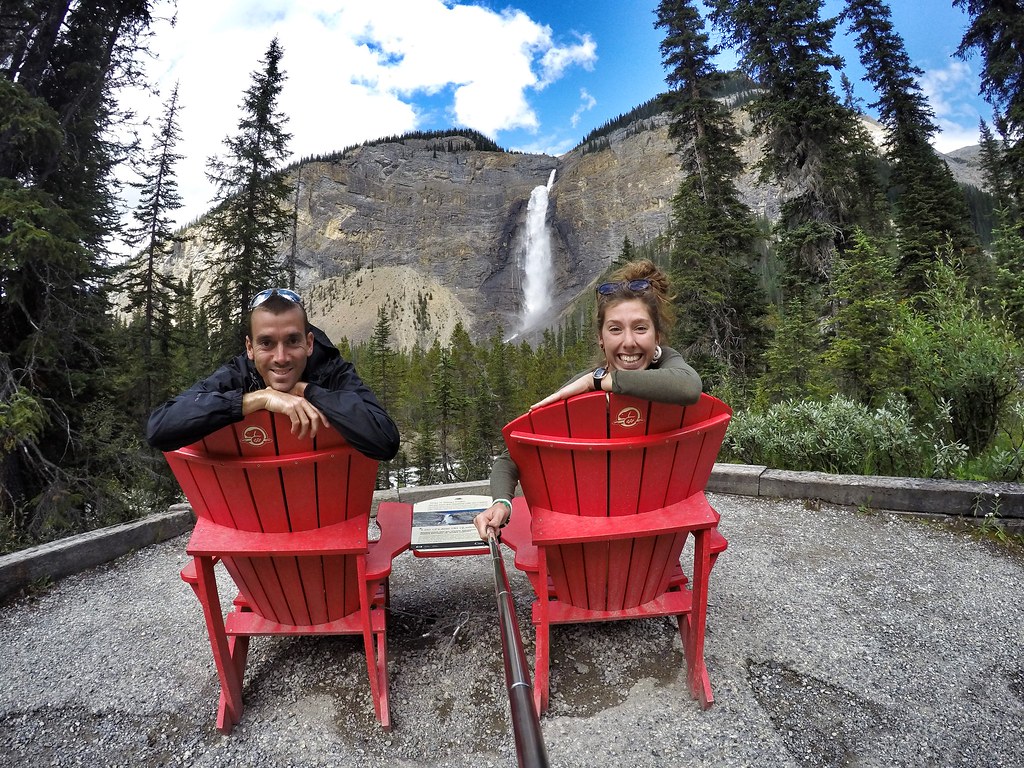 The next morning we woke super early for a big 17.5km loop hike along the Iceline Trail. The trail began alongside a gushing river and after crossing a bridge we reached the beautiful Laughing Falls. A backcountry campsite was located by the river here, you’d expect it to be a wonderful hidden location to escape the crowds but there were lots of tents and people awakening, I’d be rather pissed off if I’d carried a tent there and found it so busy. 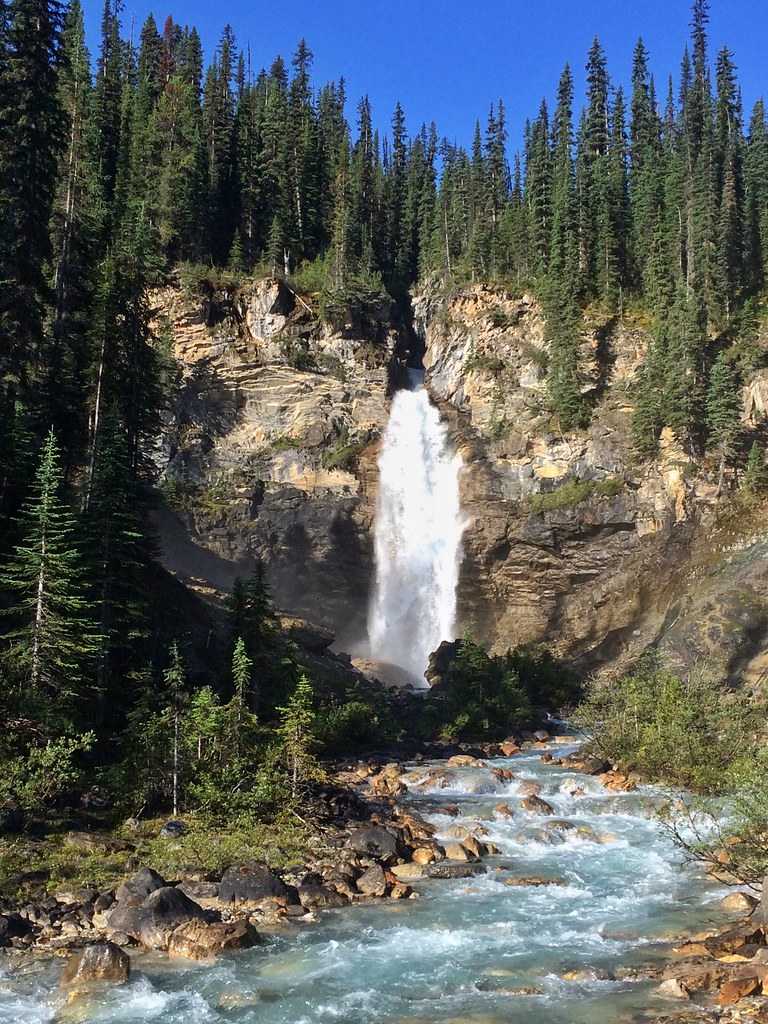 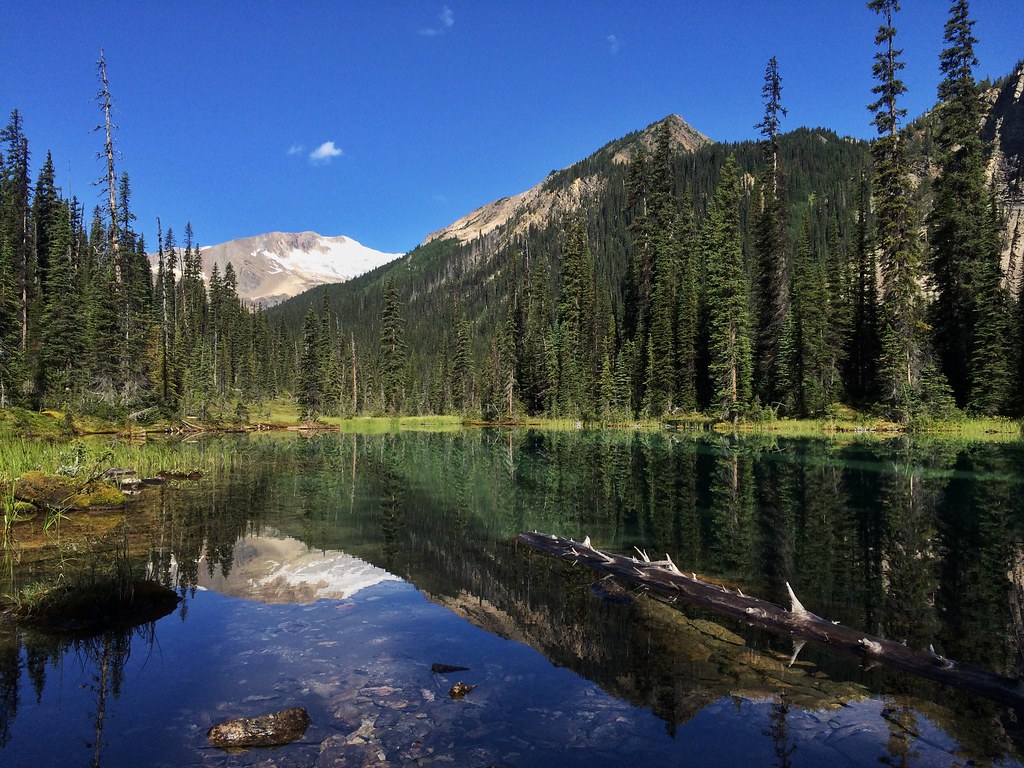 The uphill slog finally began climbing through the forest and past lots of blueberry bushes, they were rather tart after brushing our teeth though. We felt like we’d been walking forever and yet we were still in the woods and hadn’t passed any other hikers. Two beautiful lakes distracted us from the relentless walking though. The turquoise pools were dead still and we sat there quietly listening to the tweeting of birds and rustling of squirrels. It took about three hours to reach an opening and see the mountains at long last. A final climb took us up to the Iceline where the views were outstanding. We had mountains rising right beside us with glaciers spilling towards us until they thawed into clear pools and waterfalls. Everywhere we looked were peaks covered in huge glaciers. The lady that suggested this hike to us said it offered one of the best views in the Rocky’s and we could see why. From the rocky ground we stood on it quickly changed into meadows dotted with pine trees. The meadow eventually dropped into the deep valley and Takkakaw Falls was visible falling down the cliff. It was such a great hike and full of variety, there was even a pyramid shaped scoria peak that had a narrow ridge-line and made us feel like we were standing on top of the world. 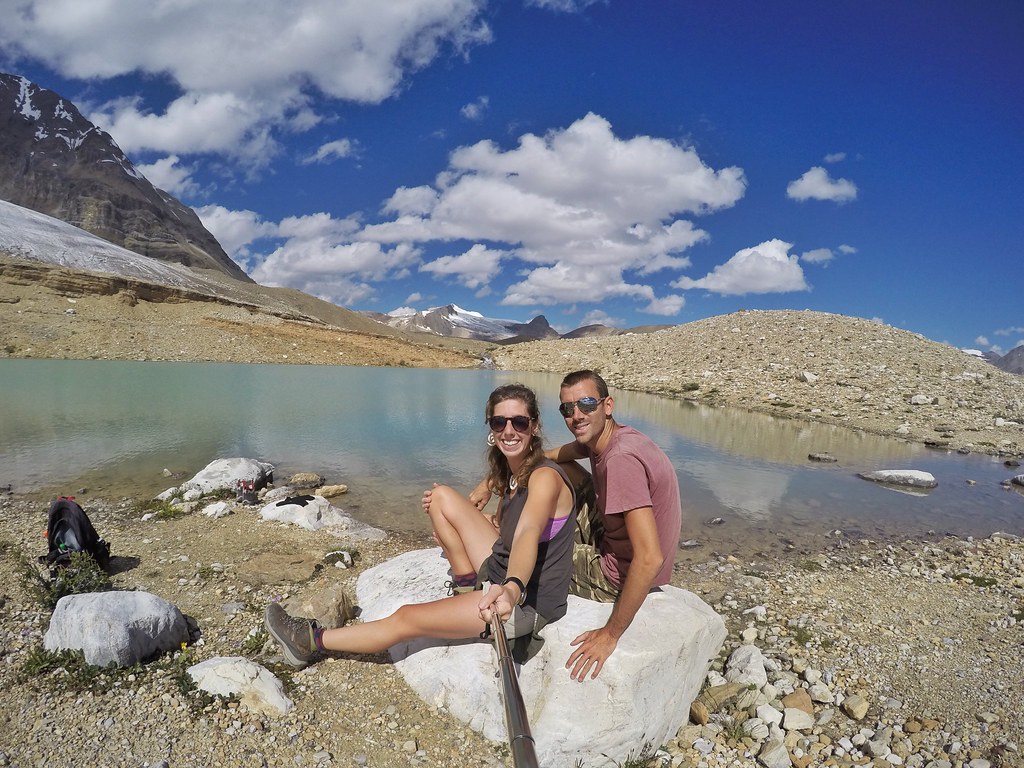 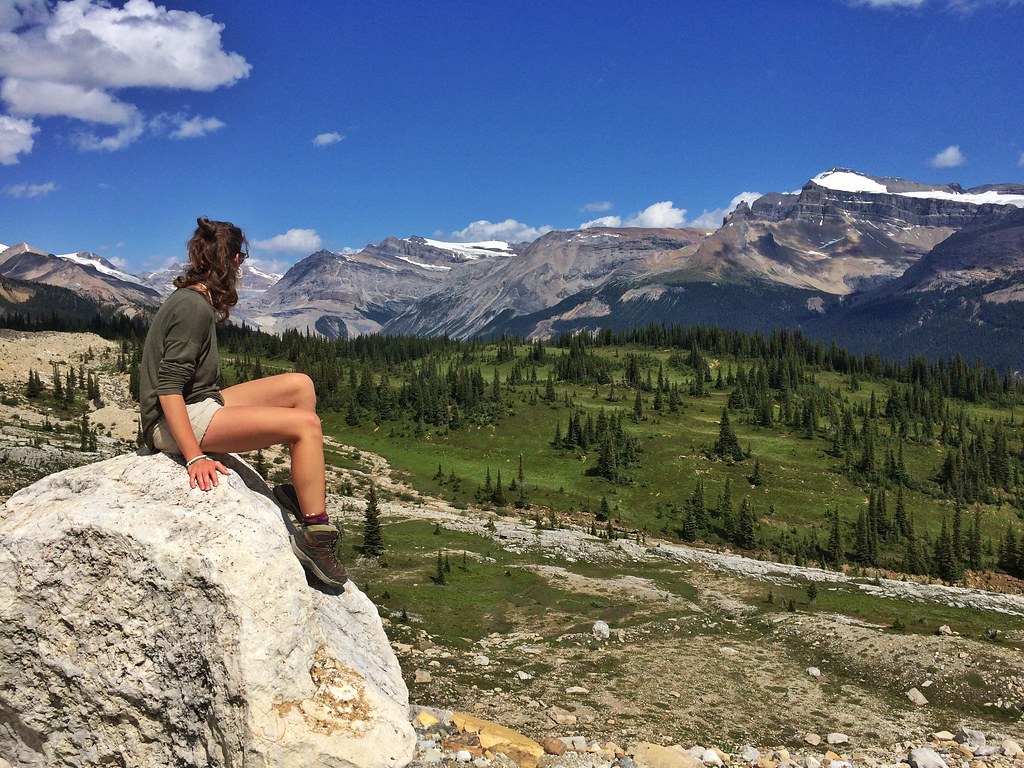 It was a long walk back though and my legs were giving up on me. I managed to fall over when I jumped off a rock and again down a steep path. We took the Iceline section very slow with lots of photo stops but we plowed up and down either end of the trail and even still it was a long 7 hour workout. 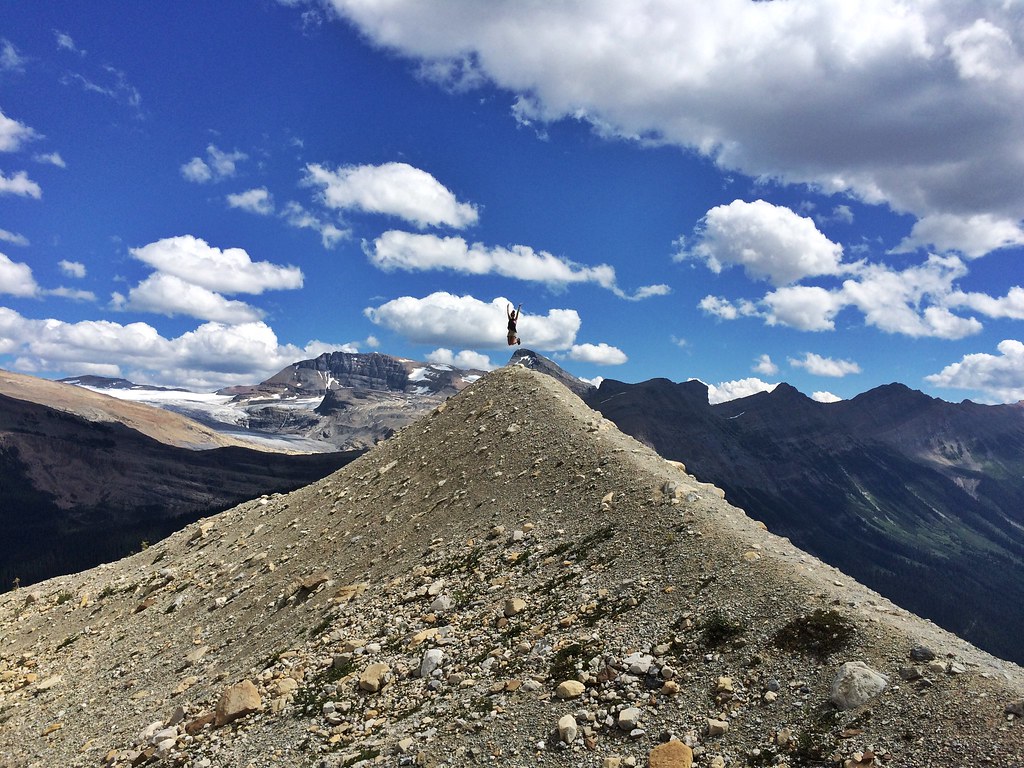 The weather had been perfect with clear blues but it was also pretty hot so we desperately wanted to de-sweat in a lake. We spotted a tiny, clear swimming pond in the village of Field so took a refreshing dip with towering peaks around us. 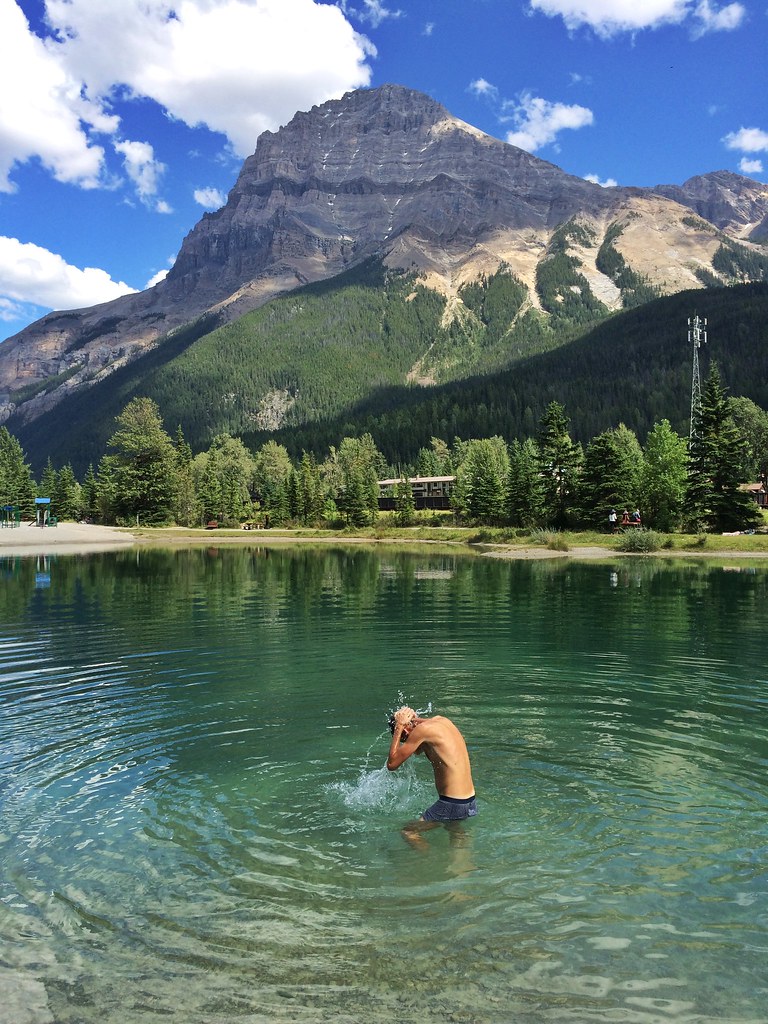 There weren’t many camp sites in Yoho National Park so they spilled out into a small overflow section. It was fine for us as we wanted to stay at the cheapest place possible, which overflow was at $7 cheaper than the main campground. We even managed to get a nice spot with a grass verge to sit in the sunshine which was delightful, if a little Sahara Desert like. It didn’t take me long to start making remarks to Craig about how hot I was…”now I know what it feels like to be a candle” I hate to complain about wonderful weather but we had no shade and I was fresh out the lake but covered in sweat again far too quickly for my liking. On the plus side the views from the campground were killer! One particular peak stood proud behind us and was lit up by the slowly setting sun. 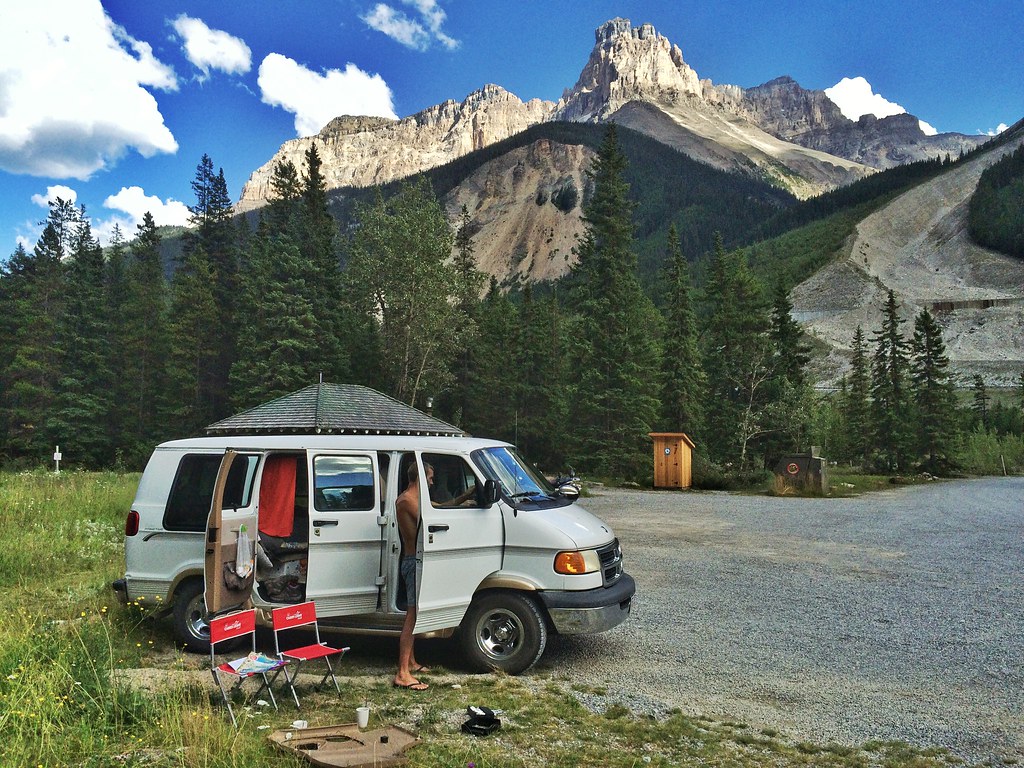 We headed to Emerald Lake the following day which was cloudy and gloomy, kind of made me regret whinging about the hot weather yesterday. I’d asked the info centre for a nice hike to gain elevation and see the blue lake from above and was advised to do the Emerald Basin Trail. Oh how wrong she was! Annoyingly the girl got her info very wrong and it didn’t offer any lake views. It was lined in ripe blueberry bushes though so we ate a few on the route up. It was a bizarre trail through woods, a tiny meadow area and then jungle like terrain where the path was only a foot wide with foliage spilling over the trail and bugs flying everywhere. Even the air was humid and muggy, it was like a pocket of the Amazon in the Canadian Rockies. The end of the hike offered a close up view of a natural rock amphitheater. It wasn’t exactly the lake view we’d expected and after the grand views yesterday in clear blues this hike was a little anti-climatic.

We rested on a rock and took in the views, watching a lone marmot scurrying around the rocks. I found a battered sweet in my bag which I began clearing up when all hell broke loose. The most ear-piercing siren screeched through the valley. Then silence. Then it happened again…. Craig looked at me in horror “have you turned on your rape alarm?!” I very confidently said no as it was impossible but the screech came again and I suddenly doubted myself and also wondered if it was like a natural disaster warning alarm. I looked around and saw we were surrounded by wilderness, there’s no man-made alarm systems round here…and then I spotted the culprit. It was a bloody marmot! He was standing up and basically shouting at the original marmot we’d spotted. Just one more noise and then he charged and chased the other one into the valley. 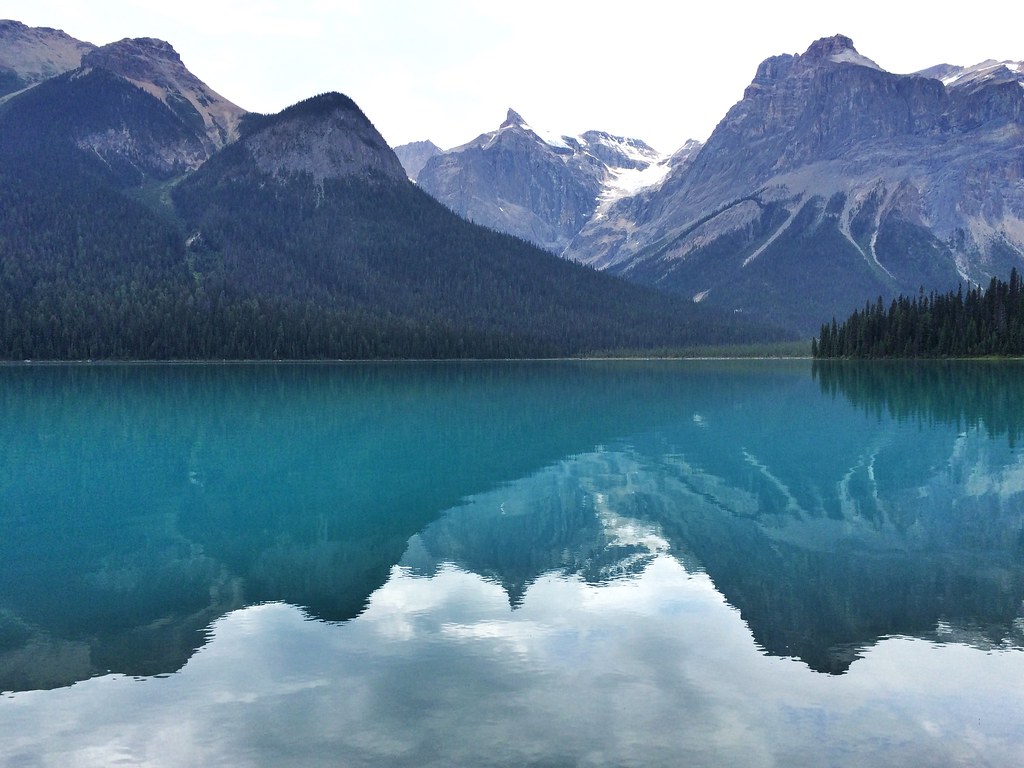 We slowly walked around the rest of Emerald lake enjoying the turquoise colours of the water against the forested mountain slopes. Yoho was a lovely detour away from the hoards of tourists at Lake Louise. 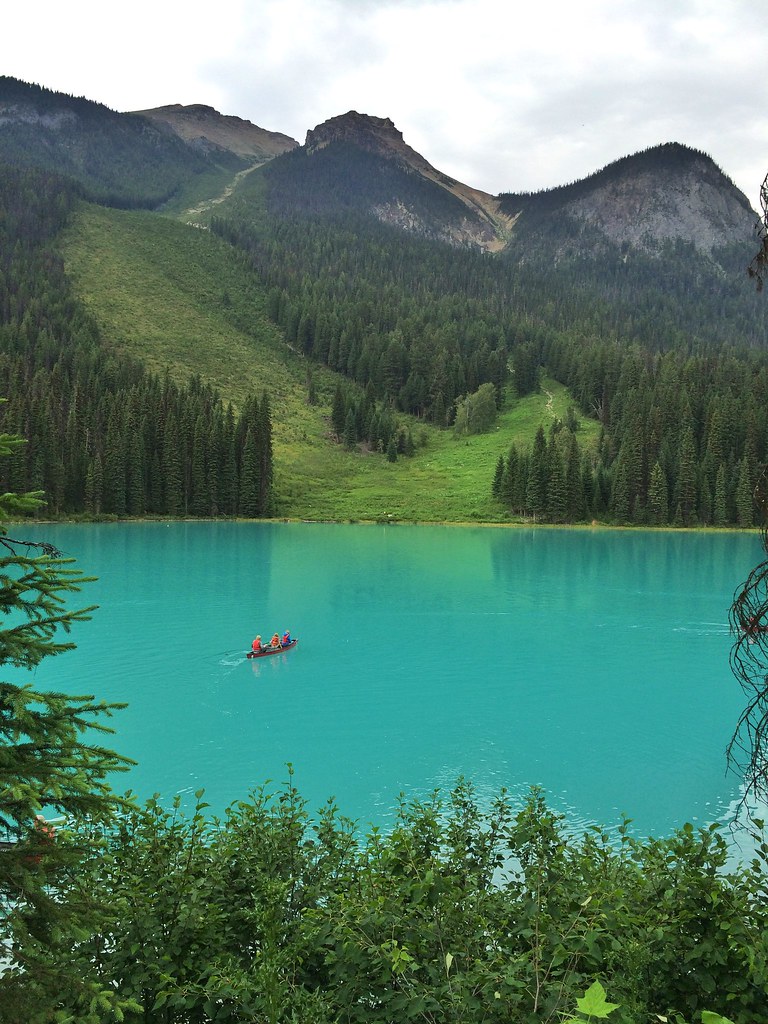