Lake Louise was very similar to how we remembered it; a beautiful lake surrounded by mountains, glaciers and wilderness. It’s the sort of magical place that deserves to only be witnessed by those who hike to it, but instead it’s the busiest attraction in the Rockies and full of tour buses, and instead of birds tweeting all we could hear was screaming Asians. I have no idea what their saying, is it excitement, general chit chat or being overly bear aware? Sadly even on our last visit in Autumn 2010 when it was fairly quiet I remember feeling like we had to escape the noise of screaming people. 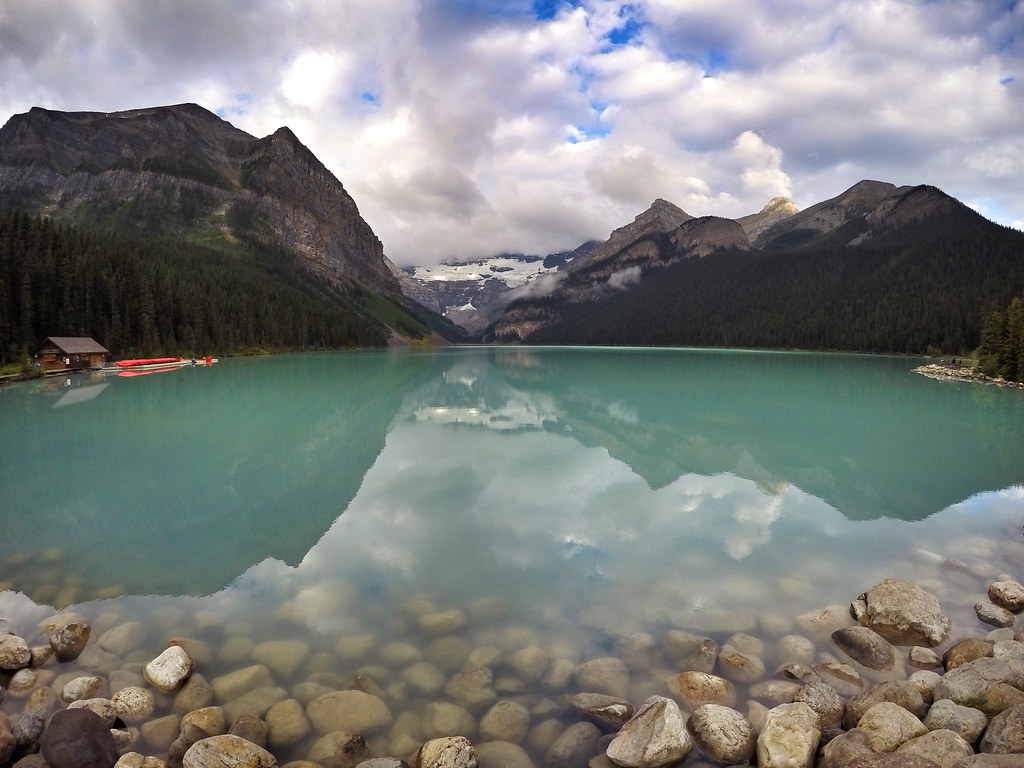 We wanted to get a nice view of the whole lake so picked the Lake Agnes Hike with a detour to the Big Beehive. The trail was wide and like a path you’d find in a city park. It also attracted lots of people who we overtook on the climb up. I felt like we’d beaten most of the crowds but there were quite a lot of persistent buggers who must’ve woken before the sun. On the way up was Mirror Lake which lived up to its name and reflected the big beehive in its calm water. We could see how it got its beehive name tag as it really resembled one. Further uphill we reached the Agnes Lake Teahouse. We expected it to be very quiet but alas, the sunny patio was filled to the brim with earl grey sippin’ tourists. Its the main draw card for people doing this hike; a short uphill walk and then reward yourself with tea and cake. Supplies are delivered to the Teahouse via horseback and occasional helicopter drop offs so it’s a pretty remote location. 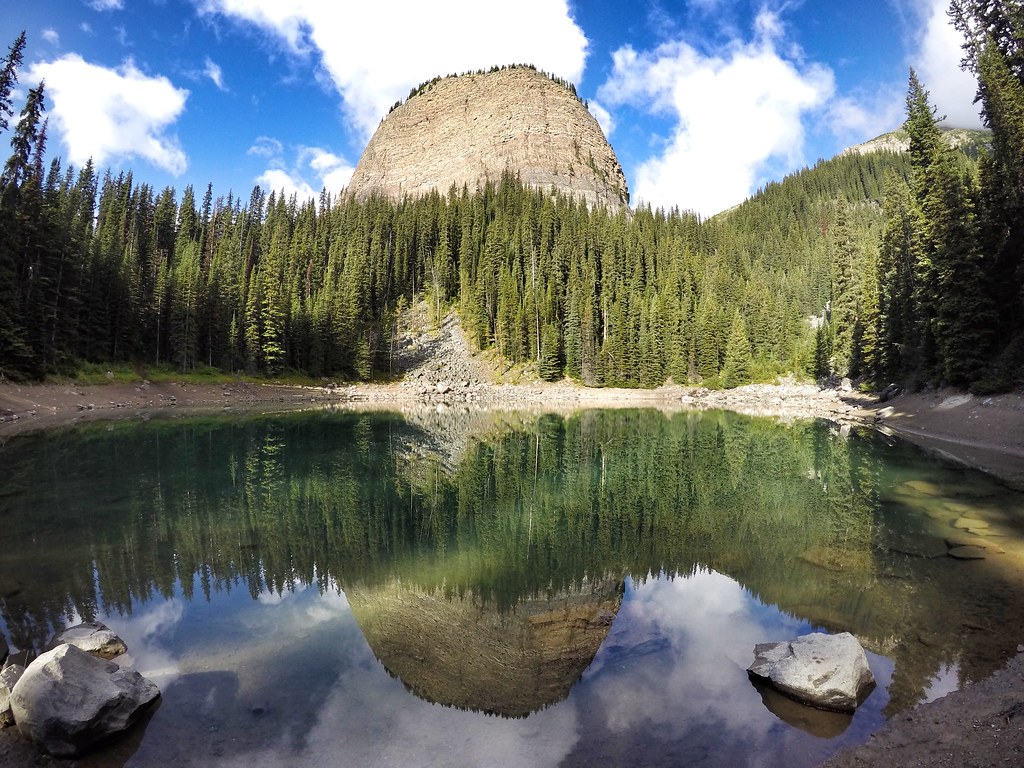 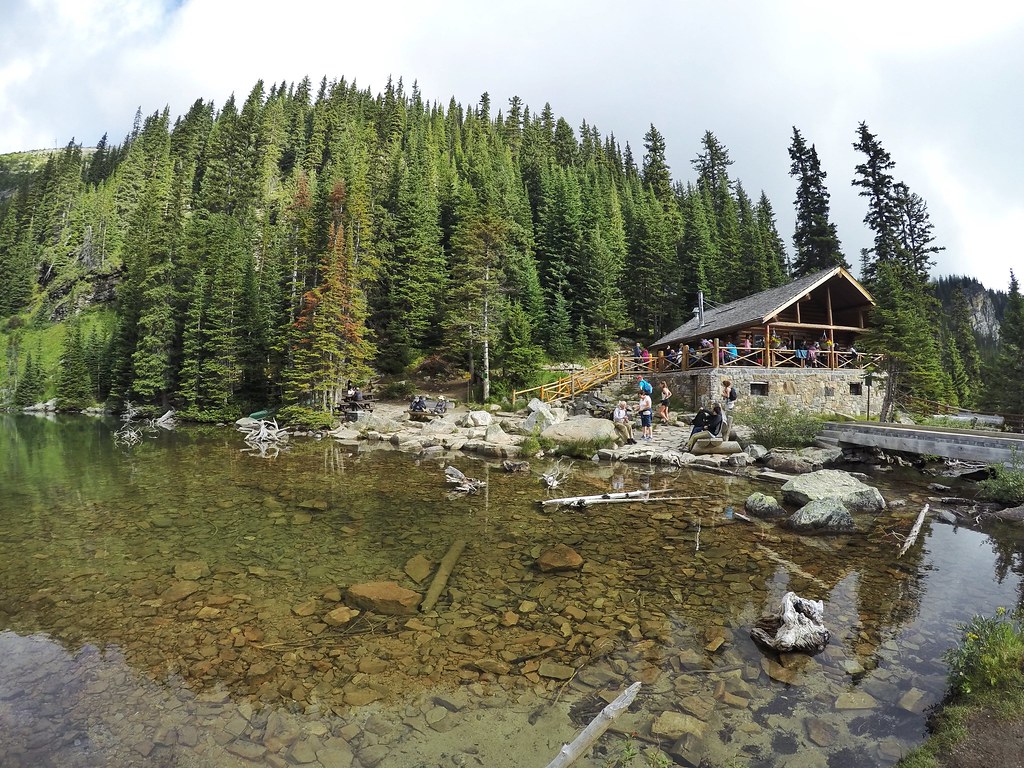 While we were hiking up only one person overtook us and he was dressed like a cowboy. I was about to say some cheesy remark like ‘Howdy partner’ or just compliment him on is pleasant outfit but then I remembered the cowboy culture holds strong in Alberta and that’s probably his normal attire…but he’d still look ace at a fancy dress party. 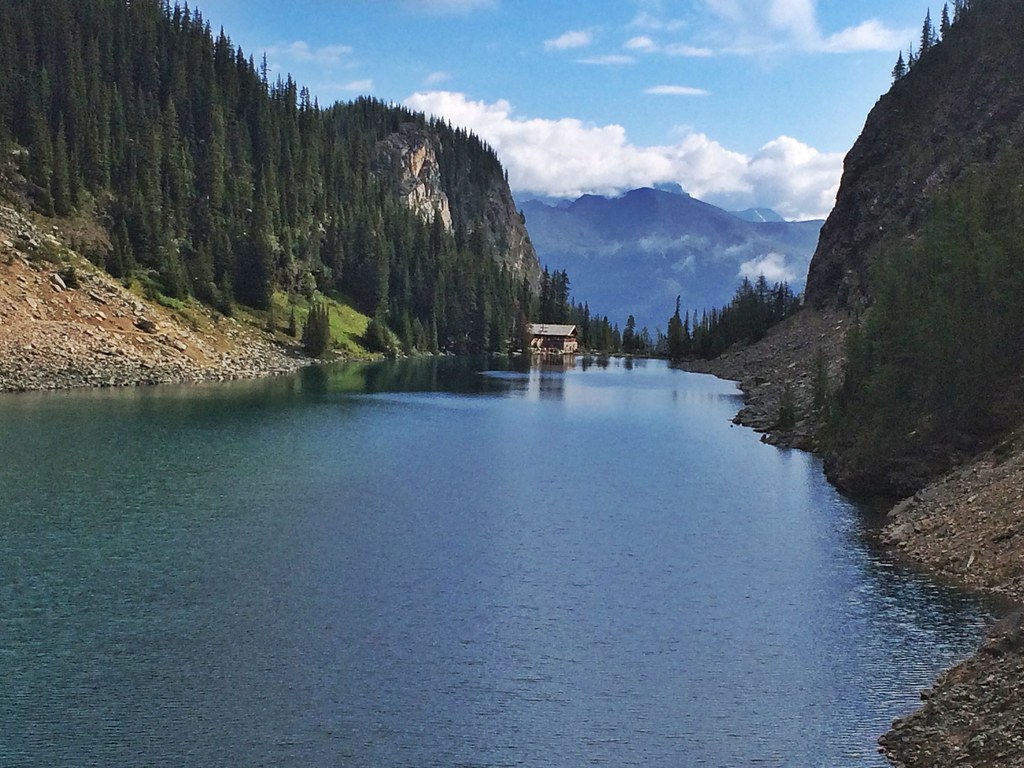 Anyway, we walked around the crystal clear shores of Agnes Lake and met our second overtaking challenge. A lone man who must’ve been nearly 70. He was dressed so smartly in tanned business trousers and a neat shirt which he matched up with hiking boots. I joked to Craig that he had to be from a mountainous place as he was almost hobbling along but at such a speed. We eventually beat the fucker to the top of the Big Beehive and asked him where he was from once he arrived. He was a New Zealand farmer, from the most mountainous area of the country and farmed sheep for merino Ice Breaker fabric. He was quite the legend. 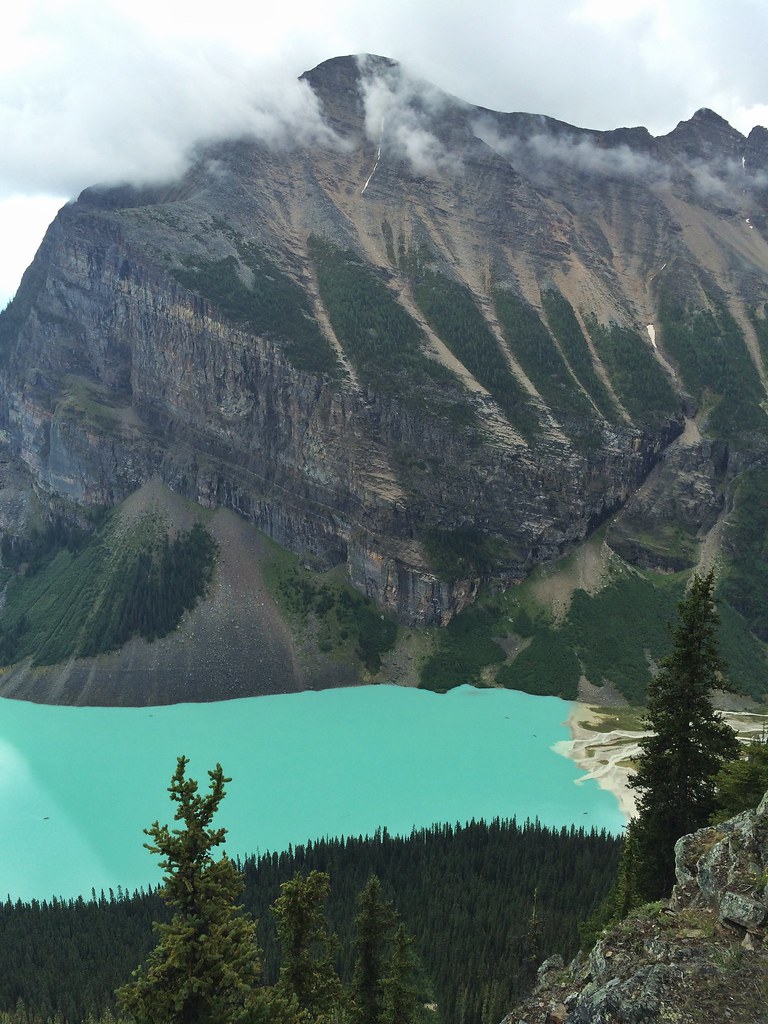 Eight years ago on this very day we flew to Australia and began travelling and working around the world. We wanted to mark the occasion in some sort of way so we blew up a bunch of balloons leftover from my birthday and attached them to the cheapest thread known to man kind. We had a fabulous view down on lake Louise with its ultra milky turquoise colour and a string of psychedelic balloons in every photo. Occasionally the string would snap and we’d have to frantically chase a balloon around a cliff edge. Then the pine trees took a few casualties too. The sun wasn’t playing game so we ended up taking hundreds of photos every time the sun teased us, it was pretty funny and everyone else that came to the top of the beehive must’ve thought we were right weirdos, and rightly so. 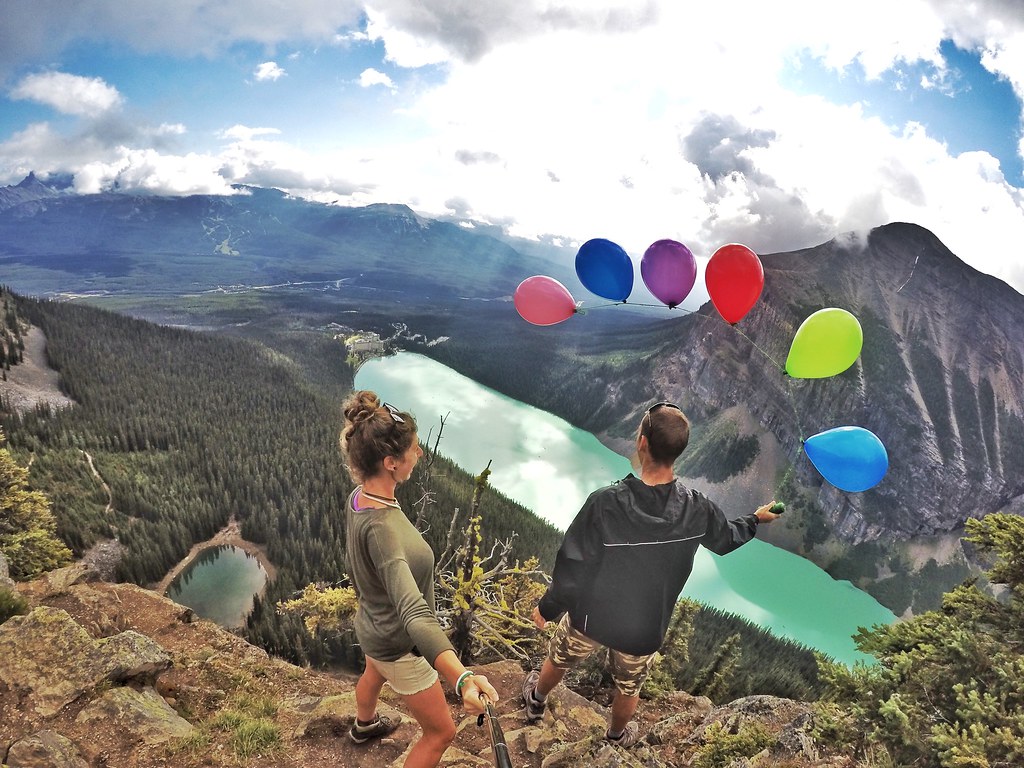 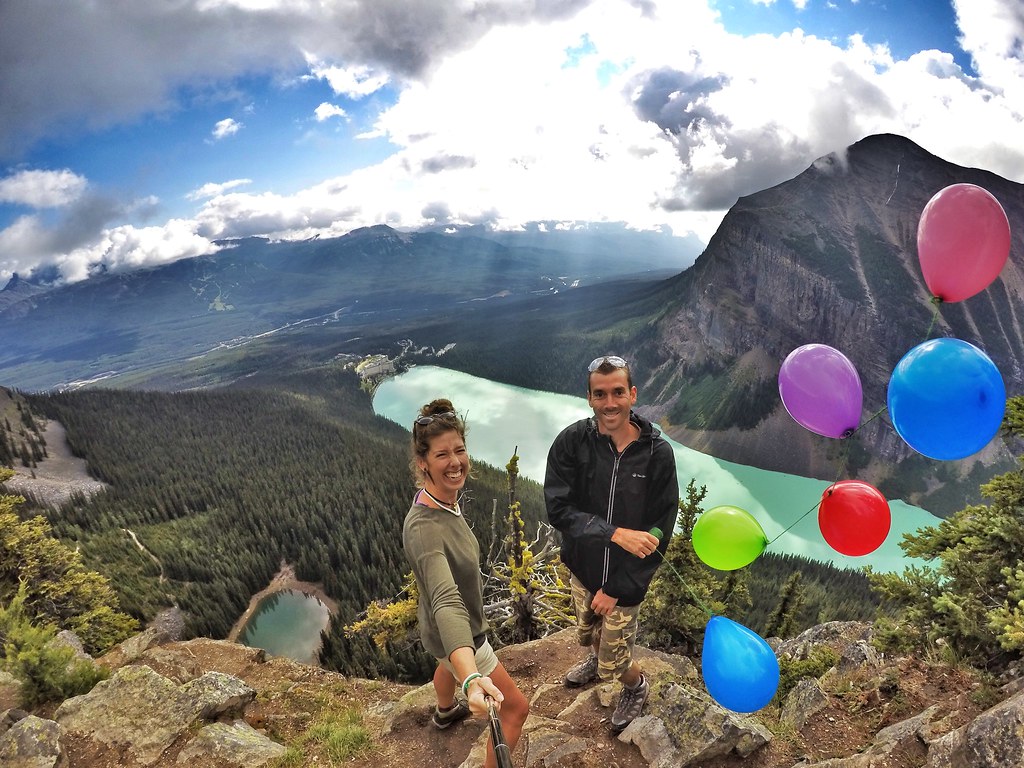 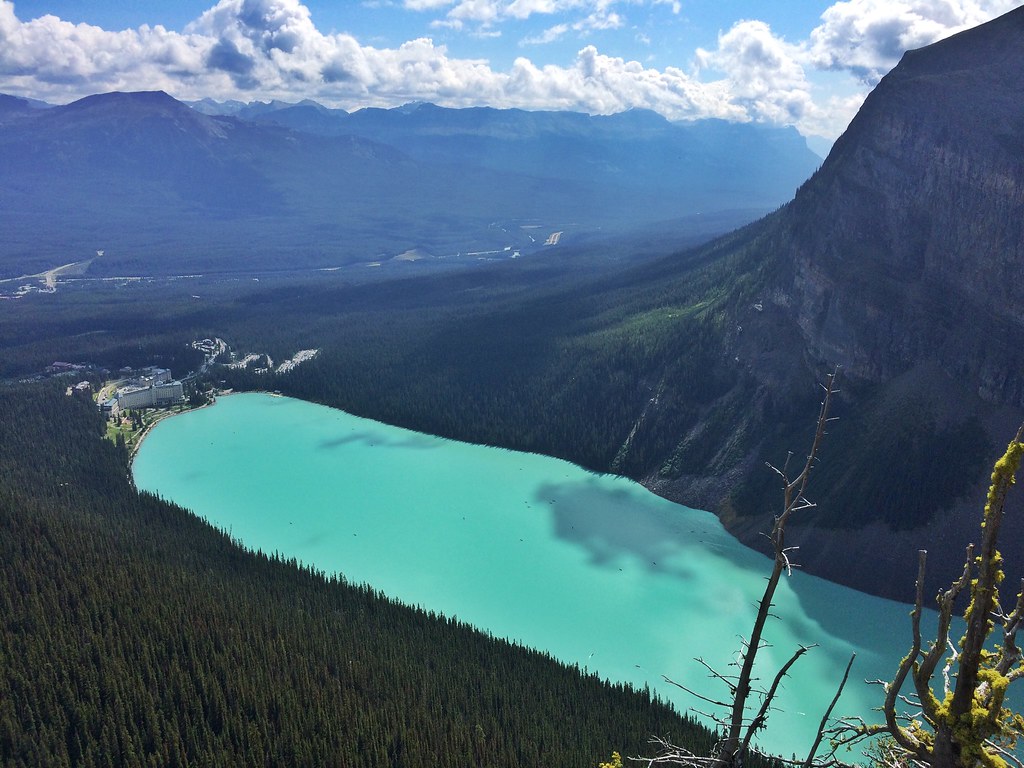