We didn’t visit Moraine Lake on our last trip to Canada as the road was closed for the season so I made sure we saw it this time round. It was just as pretty in person as it was in all the brochures, even on a cloudy day. In fact it had rained all night and was still drizzling but after climbing up a rock mound the lake was beautifully blue with the ten majestic peaks wrapped around the shoreline and reflecting in the still water. I said on this trip we wouldn’t be such tight arses and would splash out on a canoe ride on a beautiful lake. So we enquired into prices and choked a little when they said it was $75 an hour. Well…I guess we won’t be canoeing on this lake! 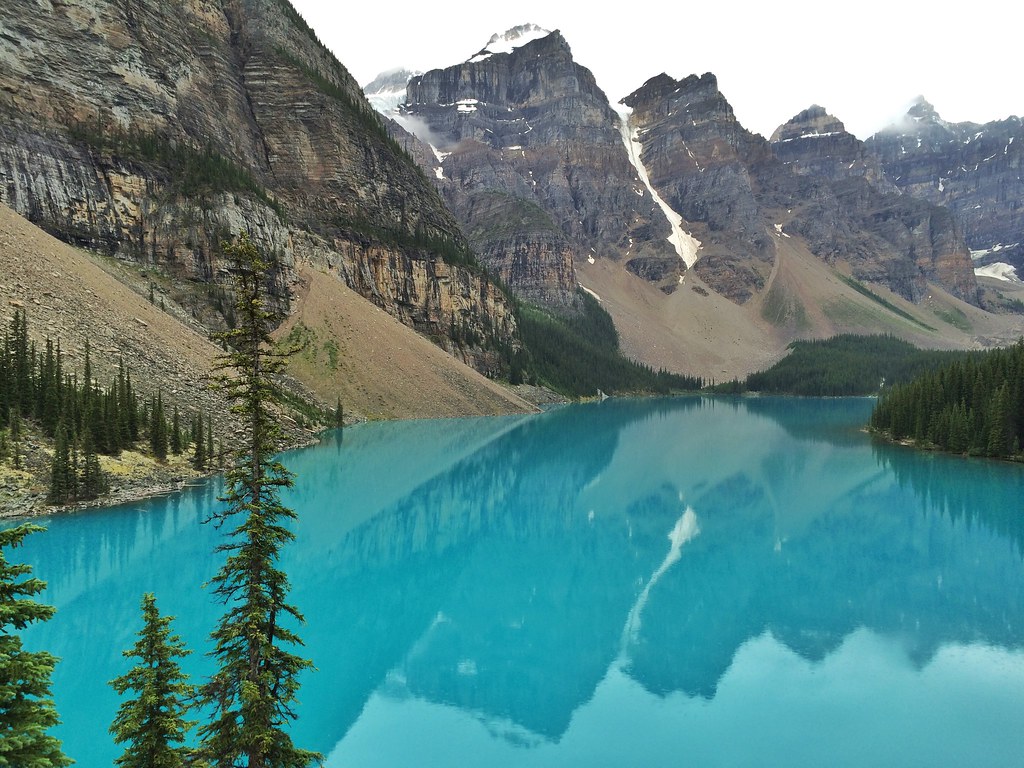 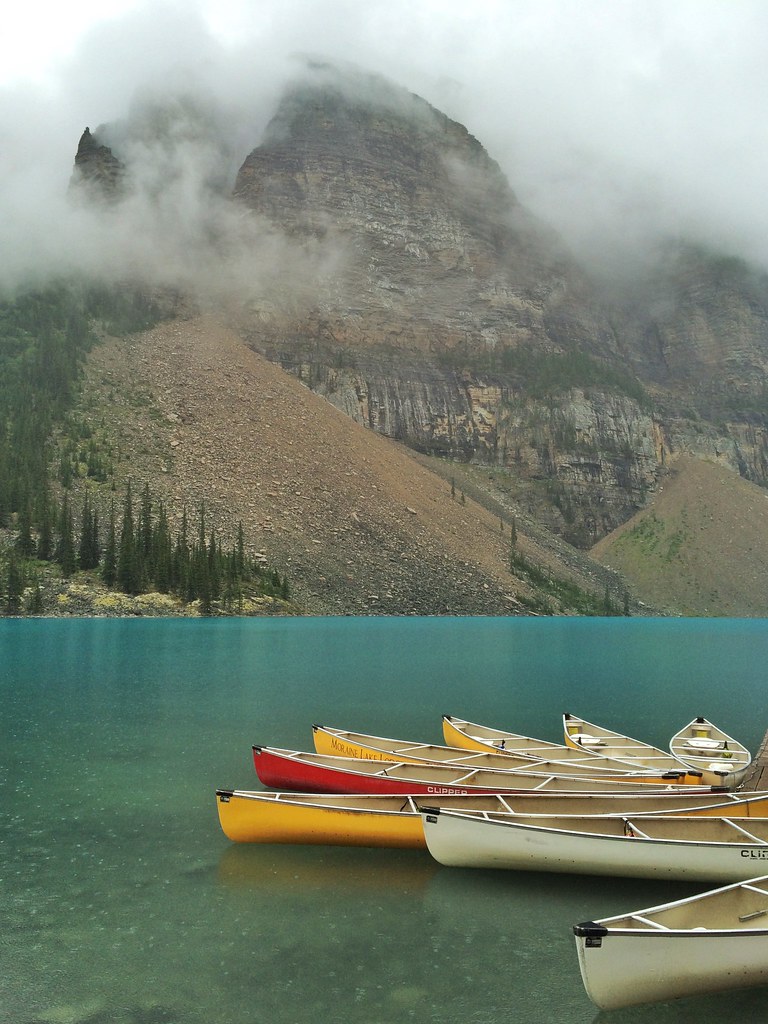 Hiking was free though and we could escape the crowds at the same time so we set off on the Eiffel Lake trail. We were expecting to have to hike in groups of four or more due to grizzly bears in the area but a sign at the trailhead suggested it was just recommended for this hike, not mandatory. So we went on our own with two jingly bear bells up a series of switchbacks through the forest. There were occasional glimpses down to Moraine Lake which was an incredible blue colour from above. We overtook a few people and then had the trail all to ourselves. Amazingly no one else was using bells or making noise, but then again we didn’t even see any evidence of Bears so it’s as if they don’t exist here. 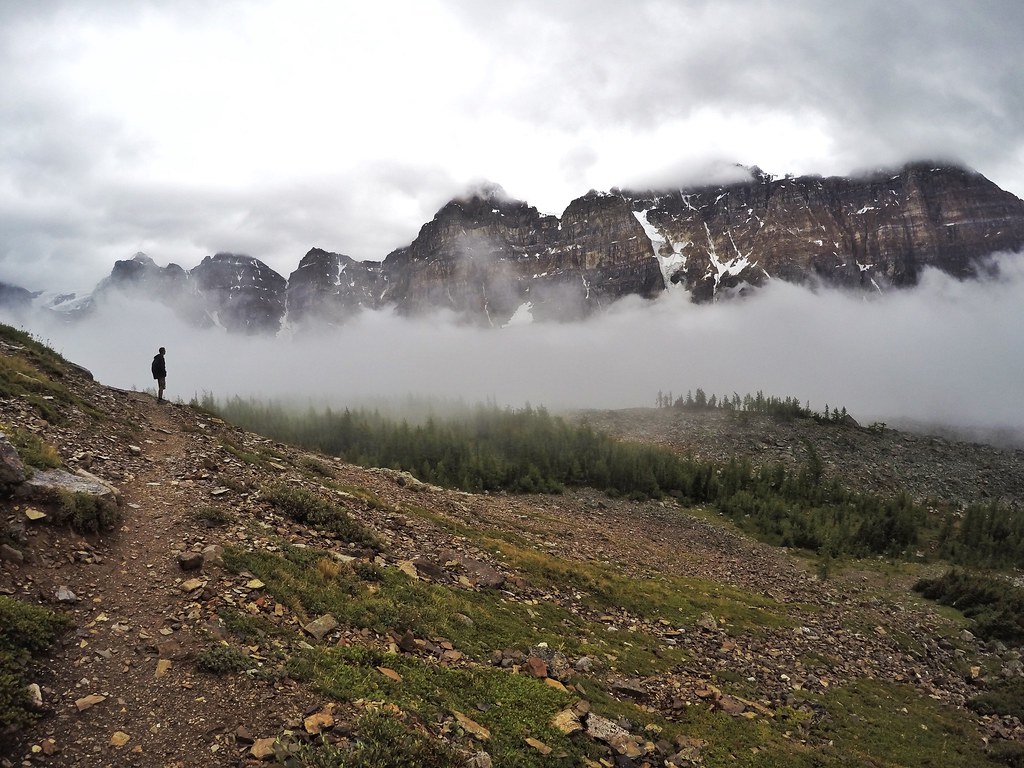 Once we finished the climb up it was plain-sailing along an exposed trail that went parallel to the ten peaks. Sadly as soon as we got a brief glimpse of them they vanished before our eyes behind a giant cloud. The trail became colder and we felt more alone in the wilderness as we entered the cloud and lost all visibility. Now would be a really bad time to see our first bear in the Rockies. Of course we didn’t though. The clouds drifted past the mountains and teased us like a strip show until the peaks were all revealed and a low line of cloud drifted through the valley just above Eiffel Lake. So that was our end goal and we sat down for lunch shivering on a rock until we were in a cloud again and packed up to leave. 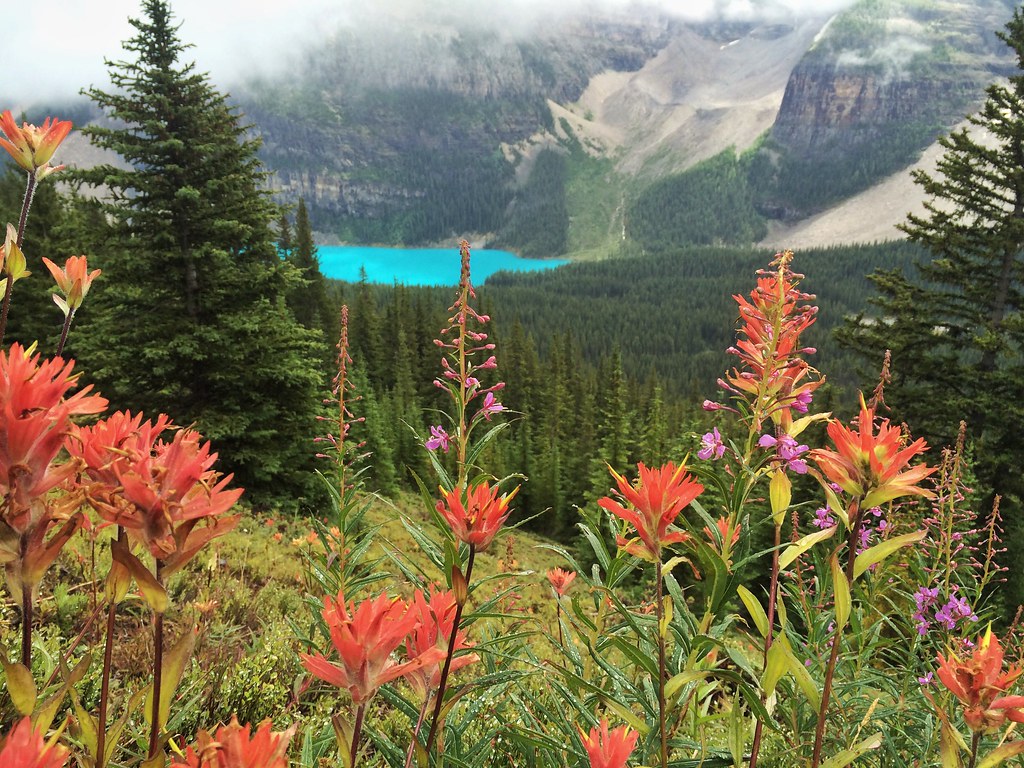 Amazingly the clouds all cleared on our walk back when we had trees obstructing our view but we did get some fabulous looks down on Lake Moraine with a stunning array of wildflowers leading down the hillside. Craig had been eyeing up the hundreds of unknown berries we were walking past and plucked up the courage to ask a tour guide we passed. I believe she said they were grouse berries, edible and part of the blueberry family. They were abundant but absolutely tiny! She said bears have to eat 200,000 buffalo berries (pretty much Bears favourite food) a day. But one bear they track never goes down the mountain for the buffalo berries and instead stays up and lives off the grouse berries, a much more arduous berry to pick and she must need literally a million of them a day. 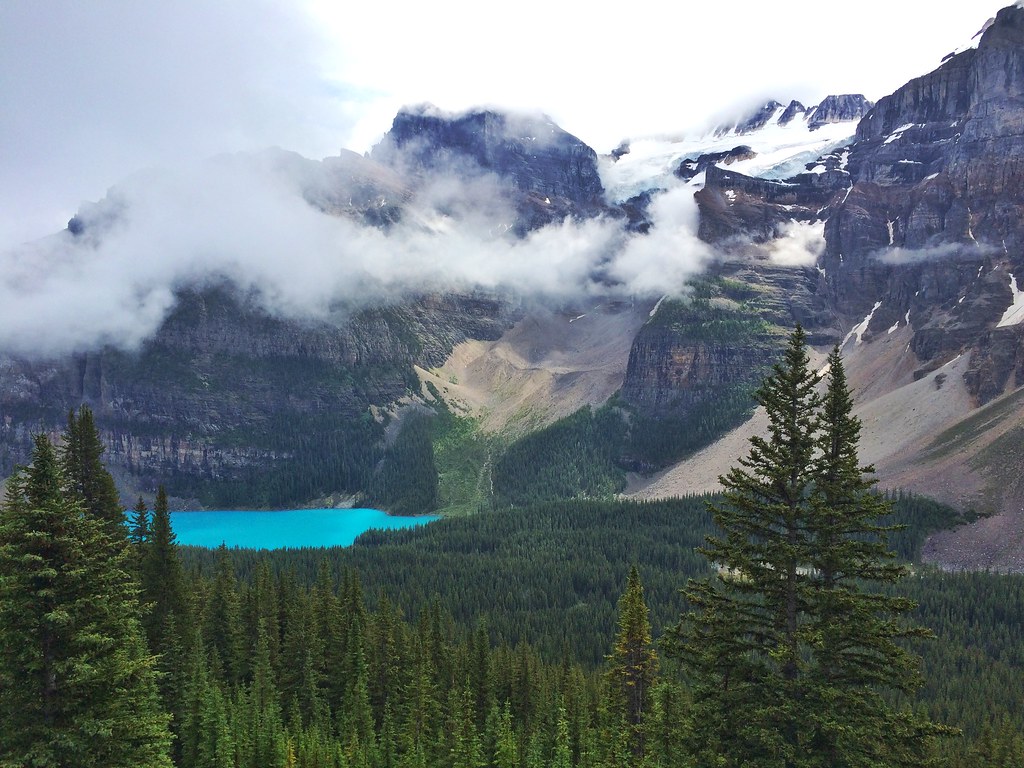 We still had some energy in us so decided to check out a little of the Larch Valley before heading back down the mountain. The weather cheered up a lot and we had big views across the ten peaks and the carved Larch Valley but just when we were ready to head back we saw a person atop a ridge line in the distance. The trail continued up the Sentinel Pass and we could see faint zig zags up the scoria slope. It looked like a bitch of a hike as my legs were already aching but we passed a couple of Kiwi’s who said it wasn’t as bad as it looked so up we went. Well, it was as bad as it looked…it was really bitchy and my legs really didn’t want to take me up but seeing that person at the top and not knowing what was on the other side made me want to get up there. The view from the top was a bizarre landscape with a wide moon-like valley, rocky mountains and weird rock formations and spires. By the time we got back down to Moraine Lake I was exhausted. We’d hiked 18km and I upgraded my afternoon cup of tea to a hot chocolate. 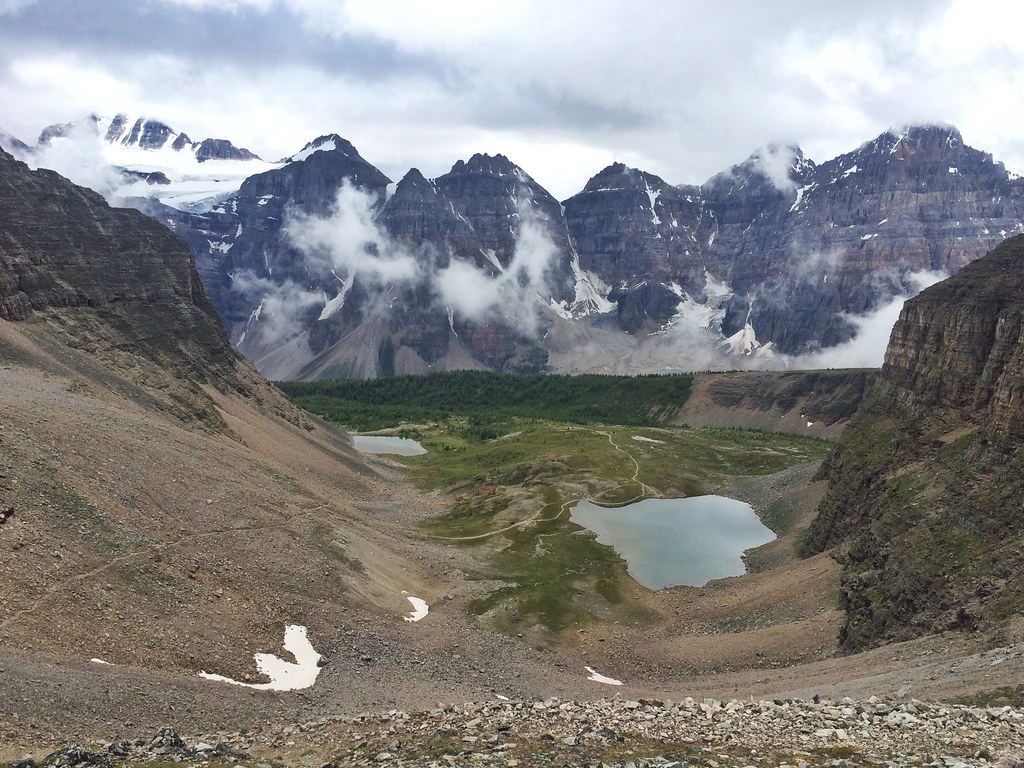 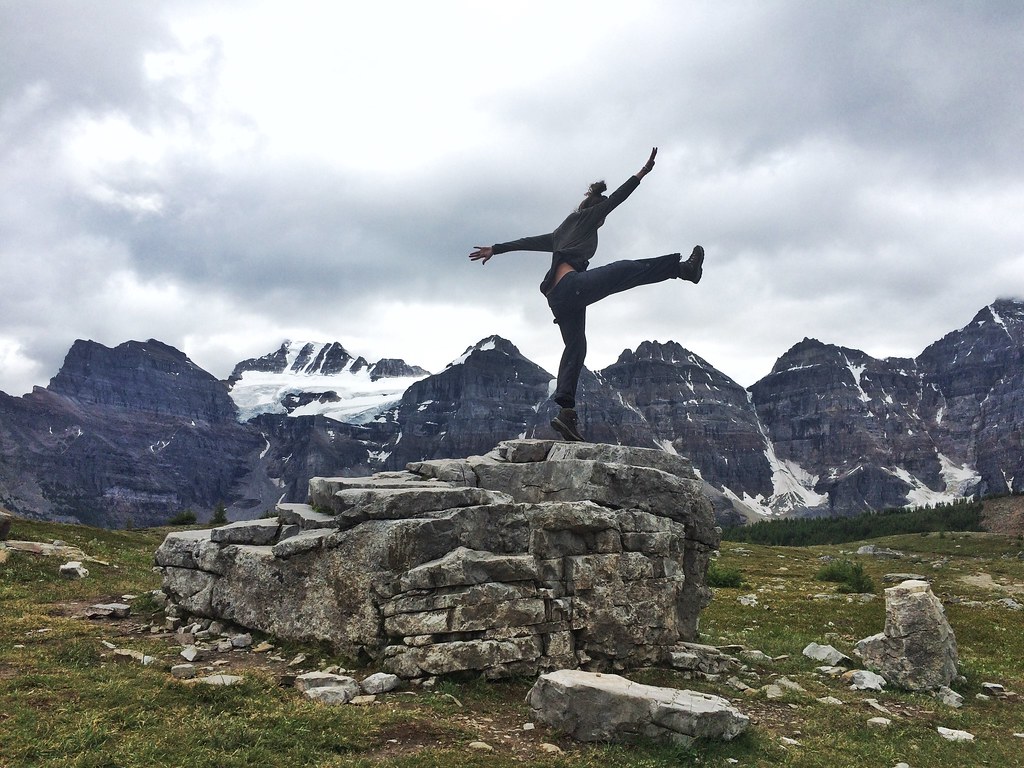 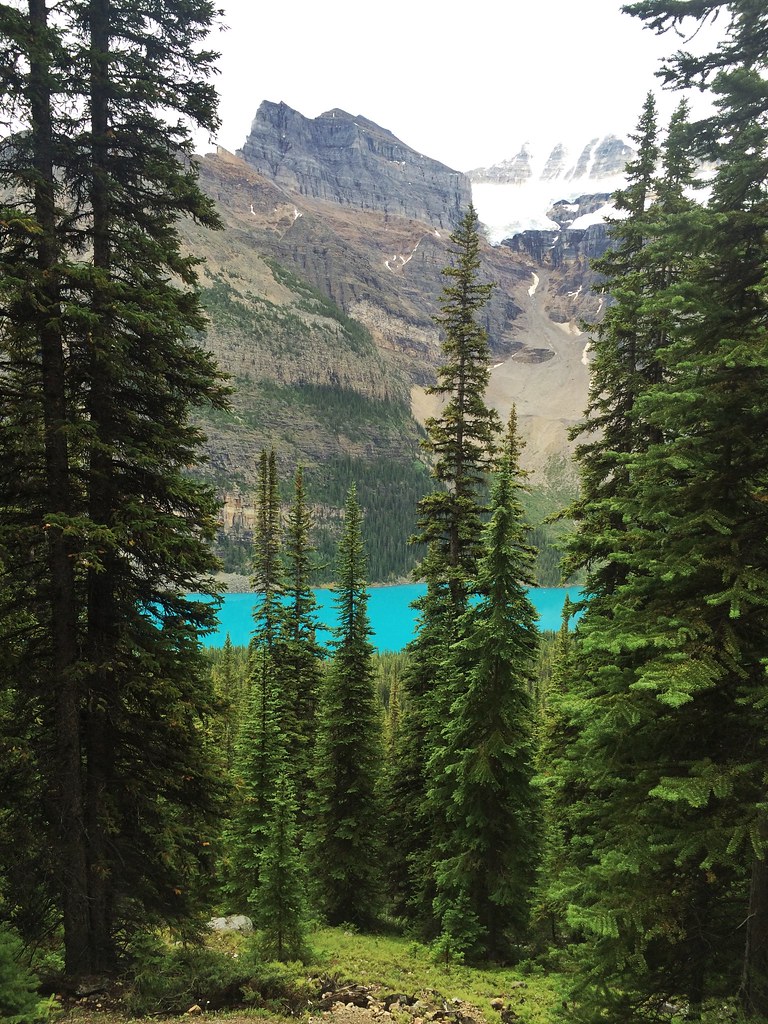