We set off south along the Icefields Parkway, one of the worlds top scenic drives which skirts along the continental divide. There were a few stop offs en route like the Athabasca falls which weren’t high but had so much water that it was quite the gusher. So much so that it had carved a neat canyon from its sheer power over many years. Further down the parkway was a highlight for most people, the Columbian Icefield. The place was heaving with tourists and quite the contrast to our last visit in Autumn 2010 with hardly a soul around. Lots of people were paying to get a ride on the glacier in a monster truck and the others lined up like ants heading up the hill to a viewpoint. The glacier wasn’t as pretty as the last time we visited, I need to look back at some photos and see how much it’s receded but I remember seeing a lot more blue lines and colour as appose to just a white and grey field of ice. It was still impressive but Alaska’s glaciers really spoilt us with carvings and walking on them without a guide. 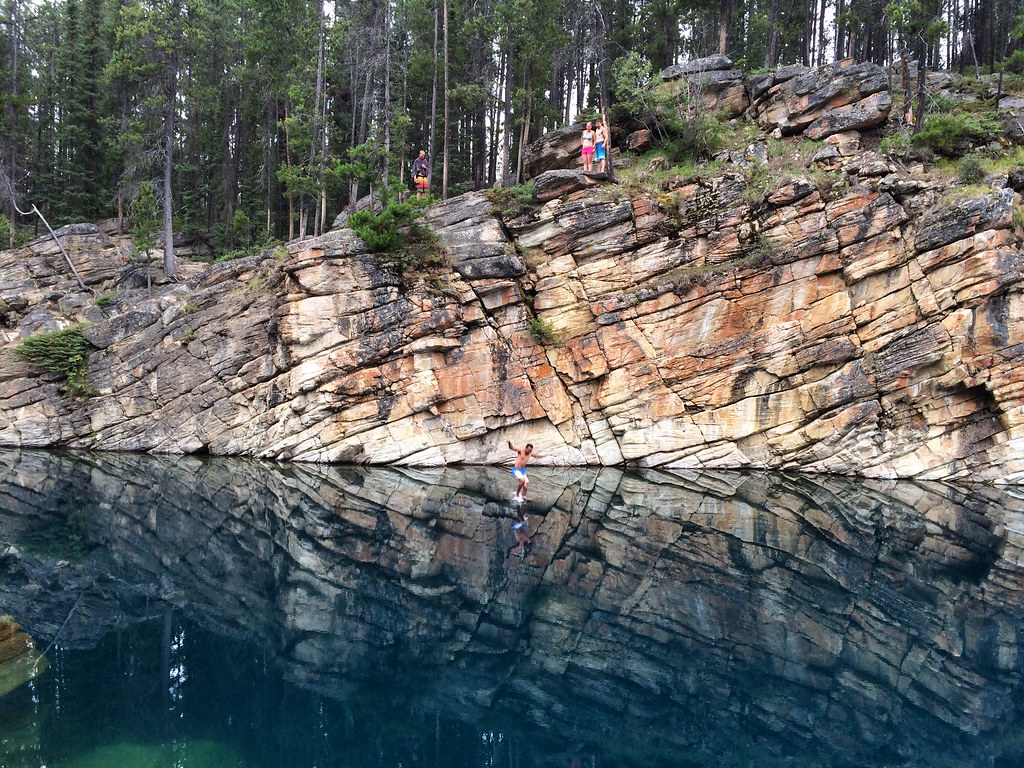 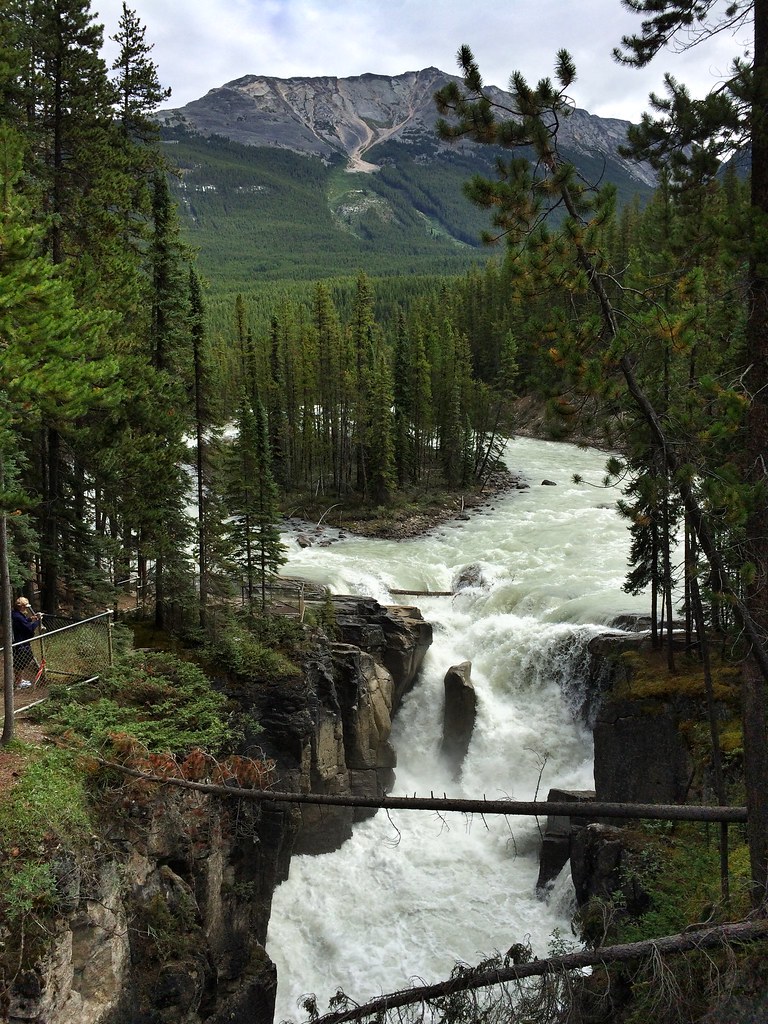 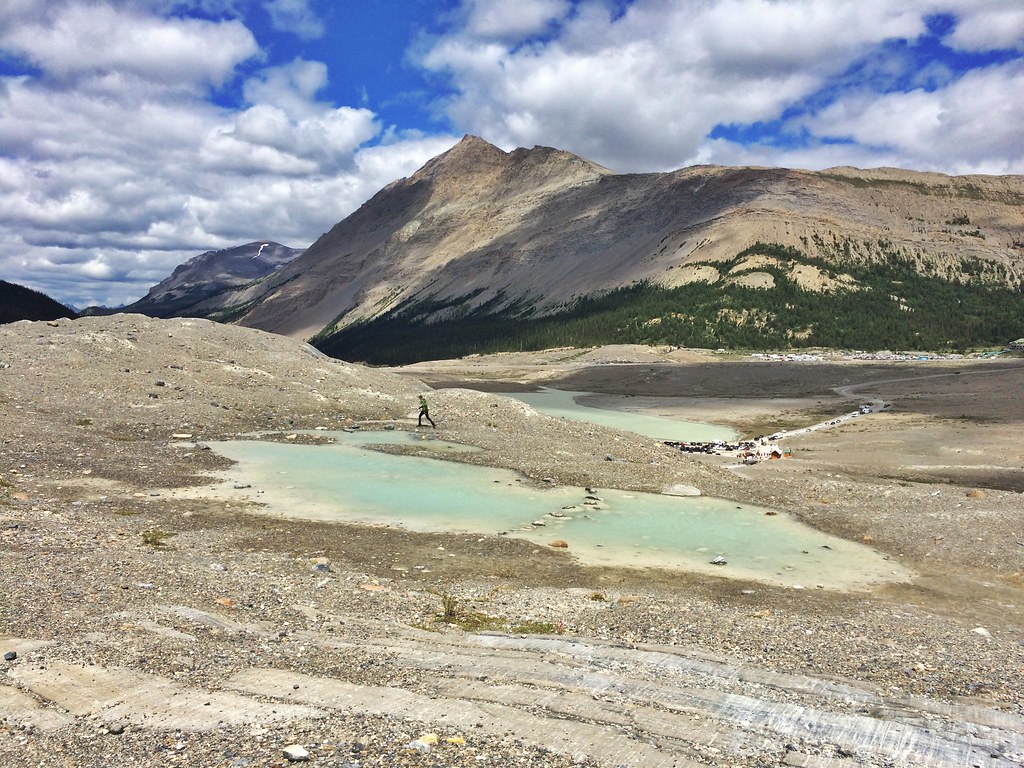 Just past the Icefields centre was Wilcox Creek campground where we reserved a nice forested site and continued on our day of adventure. The weather really improved and we set off on the Parker Ridge trail. It climbed steadily uphill with impressive views down the valley and unique pointy mountains. The end viewpoint was of Saskatchewan glacier which flowed down the valley like a river frozen in time. The mountains were rocky and barren and just a thin trickle of a river flowed from the glacier. The lush hillside we stood on was dotted with pine trees and had two stunning mountains rising like madonnas breasts behind us. 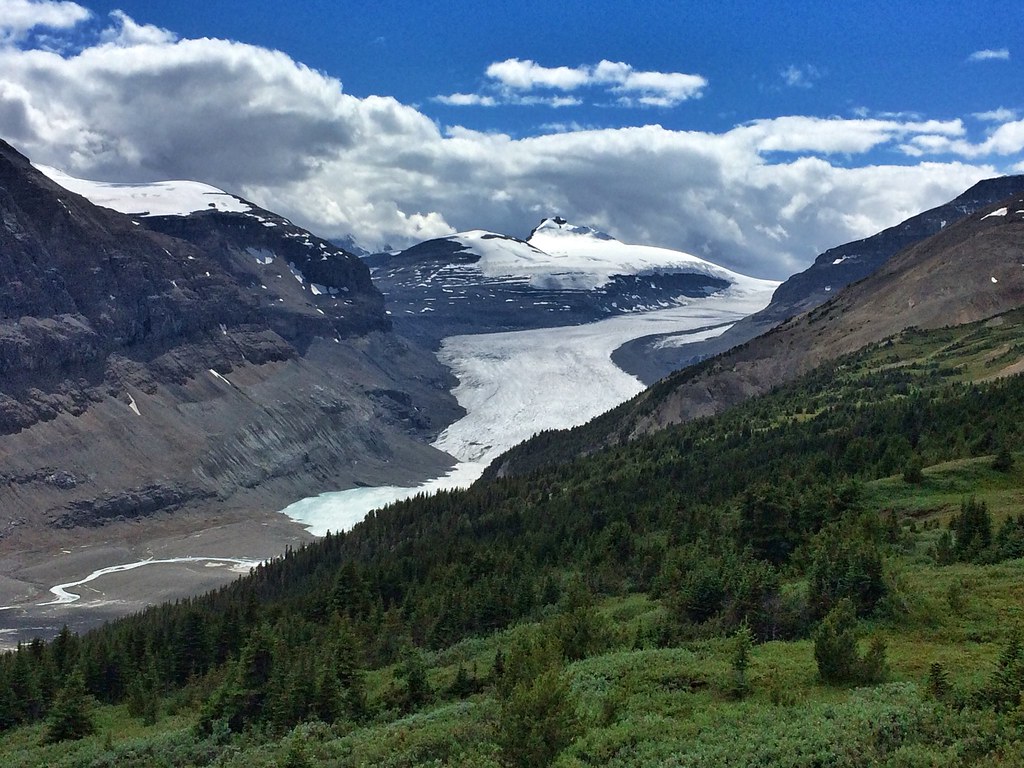 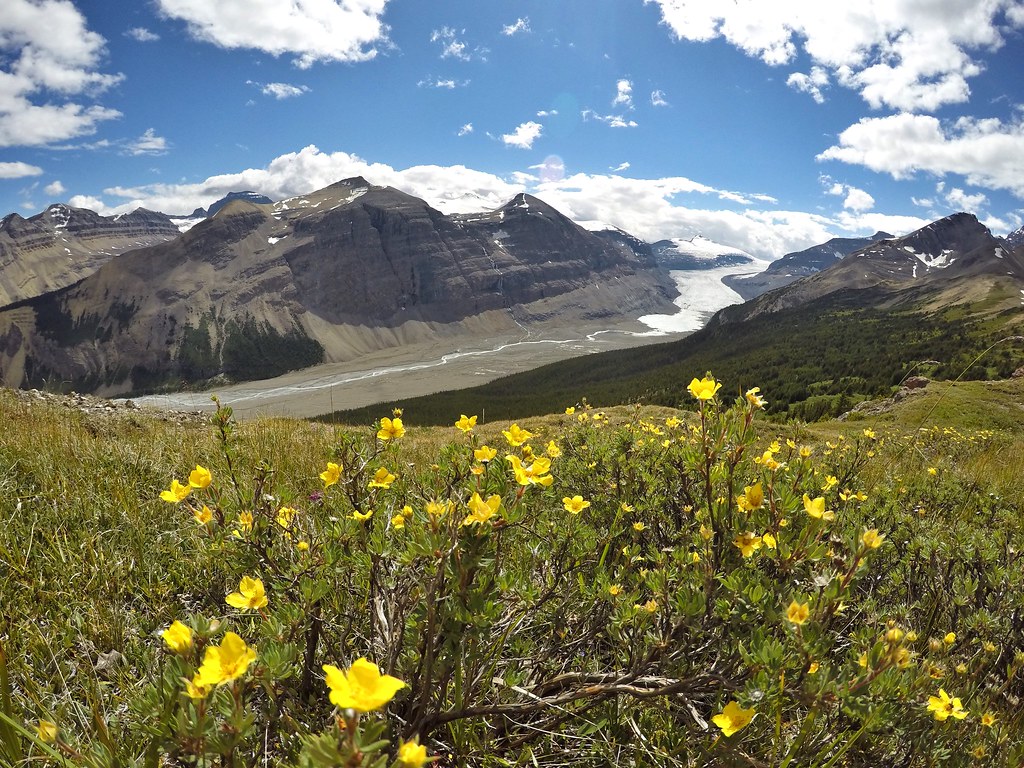 The next morning was text book perfect weather, we were up at 6.45am, it was bitterly cold but wonderfully crisp and for some bizarre reason Daphne wouldn’t start. Noooooo!!! This has never happened before! She’s a first time every time kinda girl! So we had to get a jumpstart but we were in the laziest campground ever and everyone was still asleep. We found a couple of tenters arising and neither had jump cables so we went down the hill to the main road and tried to get someone to stop and help us. It was so awkward, we weren’t hitch hiking so didn’t want to put our thumb out so we just waved in a hello/help motion. It worked though and three separate cars pulled over; one didn’t have cables, one was a very sweet Asian couple who just pulled up and said “where you wan go?” and finally a chap named Gary who was visiting some friends at the campground. Gary and Co had the cables and all came along to our camp spot – lucky number 13, oh how they laughed when we told them the number we’d parked in! After a few tries Daphne got going and we could finally hit the road, two hours later than planned. 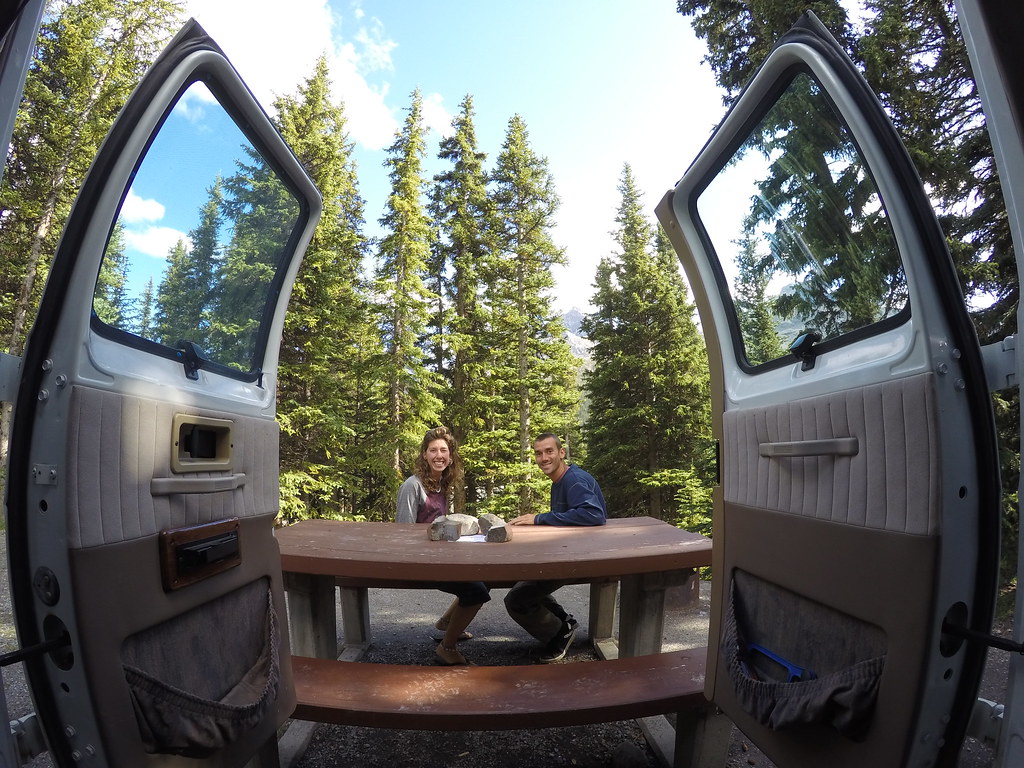 Nevermind, the weather was still incredible and we were surrounded by stunning mountains, braided rivers and glaciers. The drive was awesome but we didn’t see any wildlife… It’s a total repeat of our last trip though the Rockies I just don’t know where the animals are? Actually the last trip we did see two black wolves in the snow which is very rare and magical but still, where were the Bears?! Maybe there’s so much wilderness for them that they avoid public appearances, or maybe we’ve just been unlucky, this trip has really shown us it’s about being at the right place at the right time. 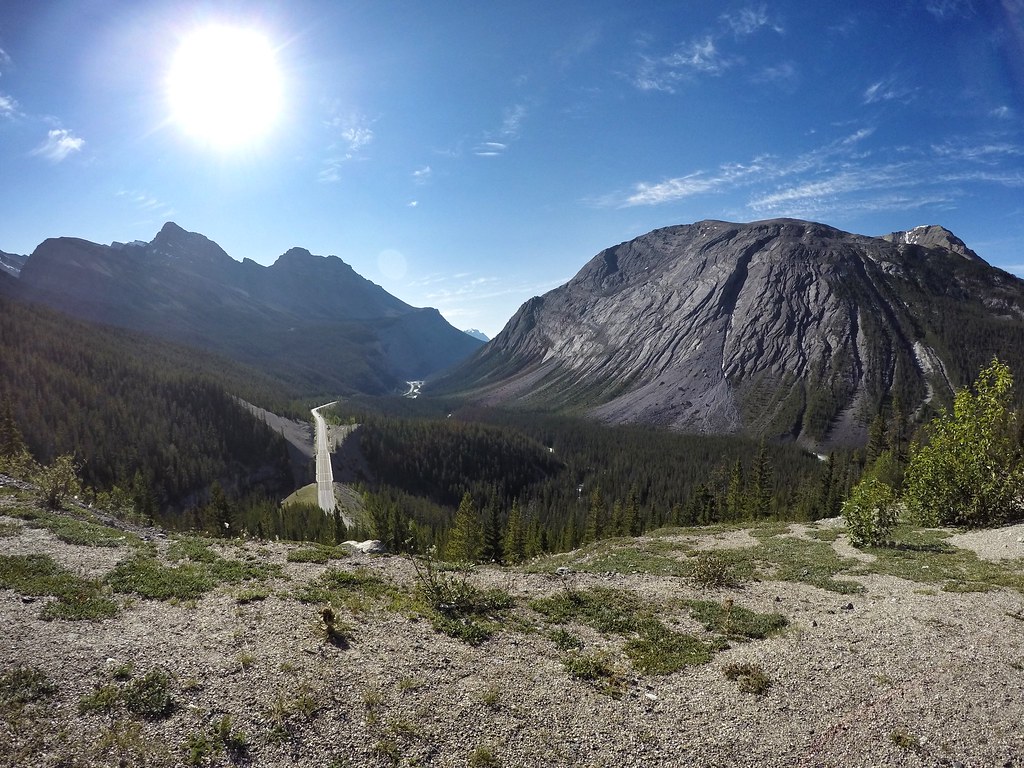 We passed an area of burnt trees from a wildfire. Blackened stumps were all that remained of the trees but when wildfires happen, they bring new life with them and Fireweed is the best example. Their name is a bit of a give away but their the first wildflower to spring up after a fire and we’ve never seen so many in one place. The ground around the charred stumps was covered in the pink flowers so we pulled up to take in the view. Further along the road we passed the beautiful turquoise Waterfowl lake. It was right beside the highway so we slammed the brakes on and checked out the view. One dramatic peak made the lake that bit more special. 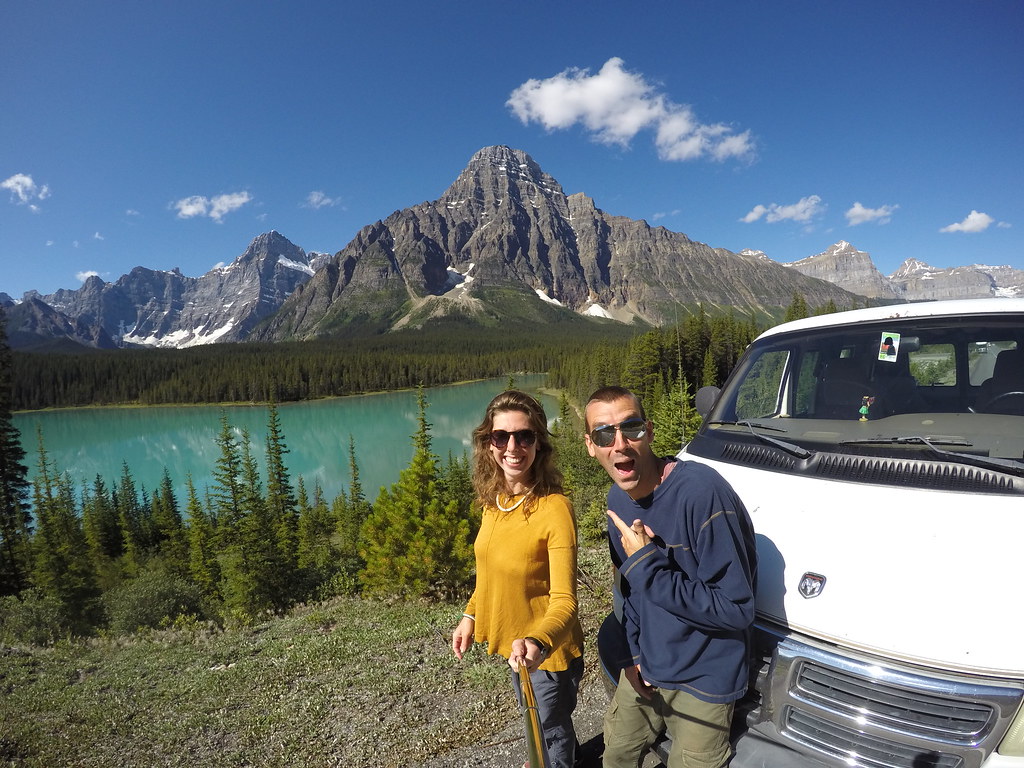 Traffic became a bit crazy thanks to a ton of construction work and massive queues but we made it to Peyto Lake. This was a very familiar spot for us as we’d come here on a snowy morning in 2010. There wasn’t a soul around and mist swept past the milky blue lake. We followed snowy trails covered in animal prints and spent all morning sledging down a steep hill. It looked very different now in summer, with hundreds of tourists and no snow but there was no denying Peyto’s beauty, it was still an absolute stunner and hands down one of the prettiest lakes on earth. The colour was just mind blowing, it was bluer than the sky and mountains towered above it while forest wrapped around its edges. A milky river of melted glacier braided it’s way down a gravel bed and into the lake. 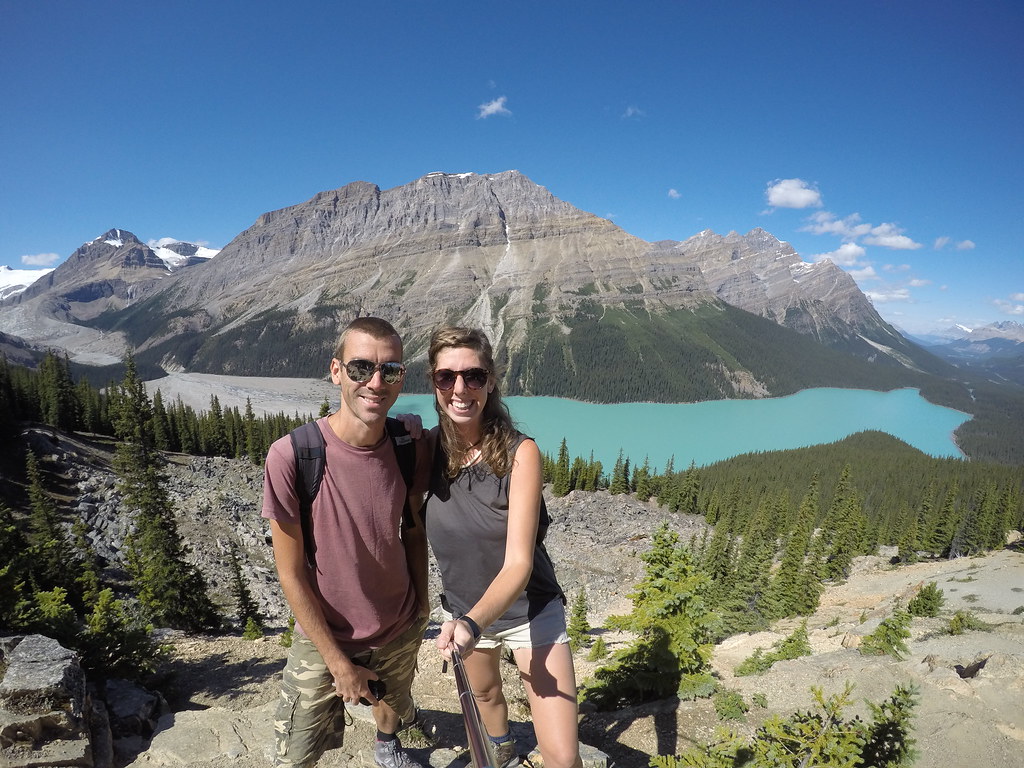 We decided to do a hike up to the Bow summit lookout which we expected to be really busy but we didn’t pass anyone for the first hour. We just climbed up and up till we reached a rocky top with cairns scattered over the ground and more Peyto Lake views. From the lake we took a narrow trail through alpine meadows that we weren’t even expecting to see. They were so much more impressive than the ‘famous’ ones of Mount Edith Cavell yet we had the place to ourself. There was a kaleidoscope of colours across the green scrubs and mountains towering in the background. The end of the walk had views across the Bow Summit and it’s valley, but we were more interested in the blue Bow Lake. It was a little far away but the same colour as a blueberry slush puppy. After a disaster start to the day it ended bloody well and was packed full of eye popping colours. 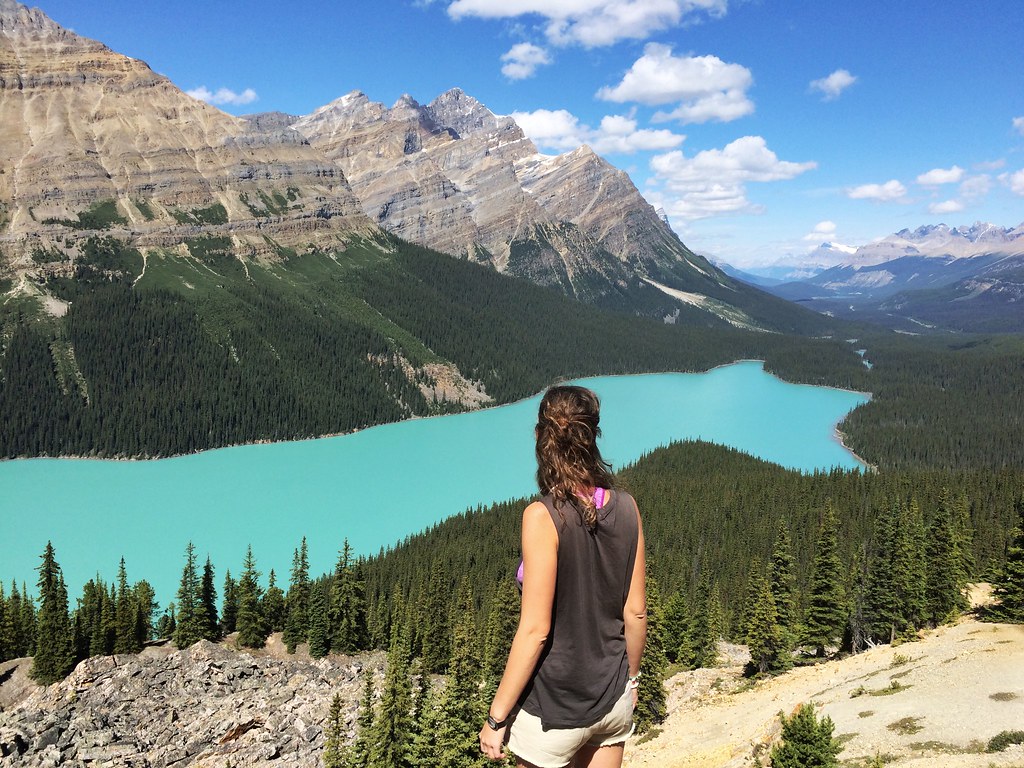 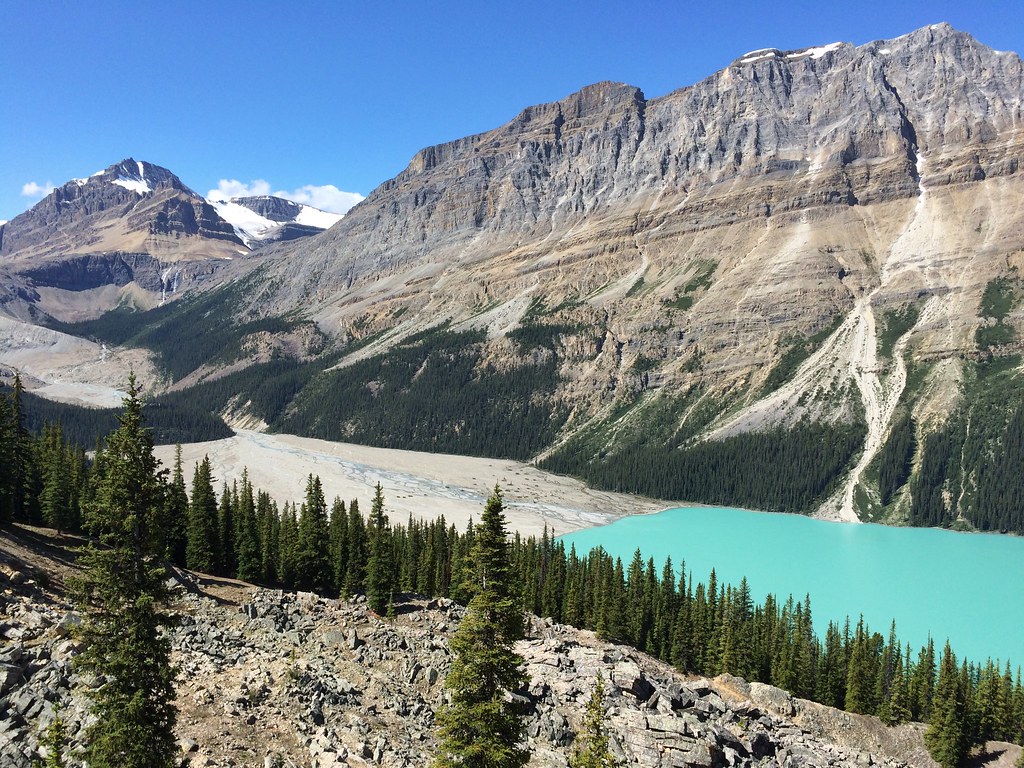 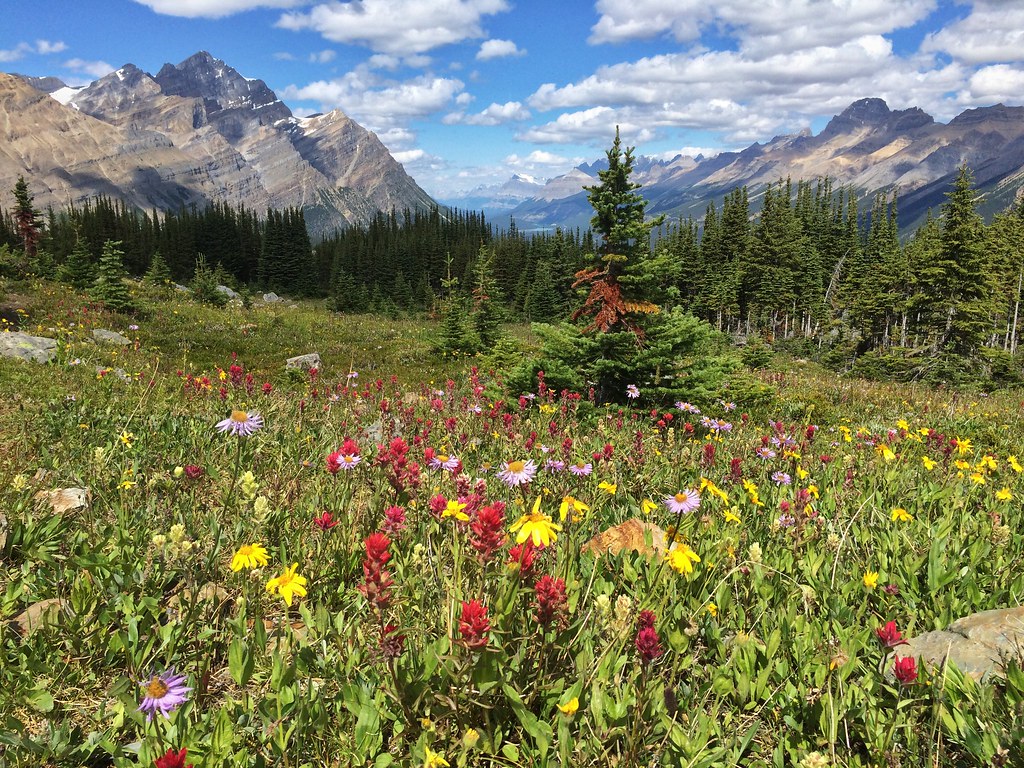 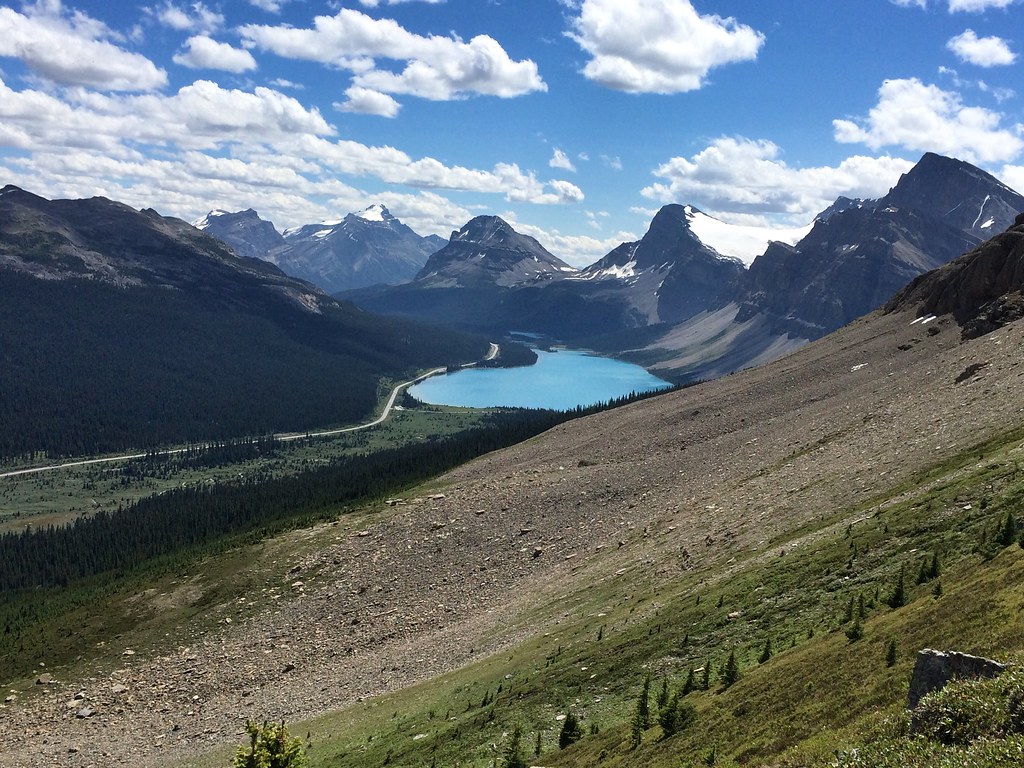