Mount Edith Cavell stood out like a sore thumb compared to its surrounding peaks. It had glaciers clinging onto its sheer edges and was one of the few mountains to still have snow in early August.

A narrow, winding road took us up to the base of the mountain which stood so high above us that I could only fit it in a photo using my GoPro’s wide lens. A short hike led us to an overlook of the mammoth mountain which had the picturesque Cavell Pond beneath it. The pond was backed by a sheer wall of blue glacier and it’s waters were dotted with floating icebergs. Signs advised people to not go down to the pond because in 2014 a huge slab of glacier fell down and created a tidal wave through the valley wiping out the entire trail. The chunk of ice that fell down was the equivalent of over 1400 city buses!!

We left the crowds and set off on a longer hike to see the alpine meadows. A warning at the start of the trail said that a couple of Grizzlies have been seen in the area and do not yield the trail to hikers…always good to know. We saw some fresh bear scat at the beginning of the trail full of purple berries but we didn’t see any berries on the whole hike (or Bears) so maybe they’ve eaten themselves out of house and home. 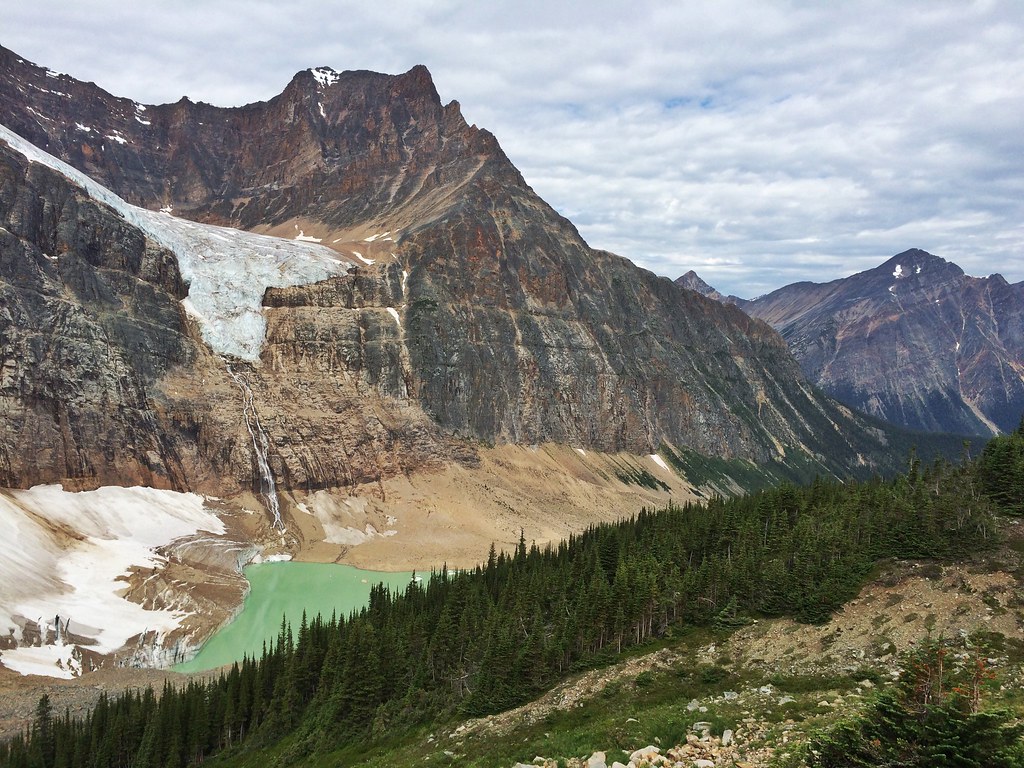 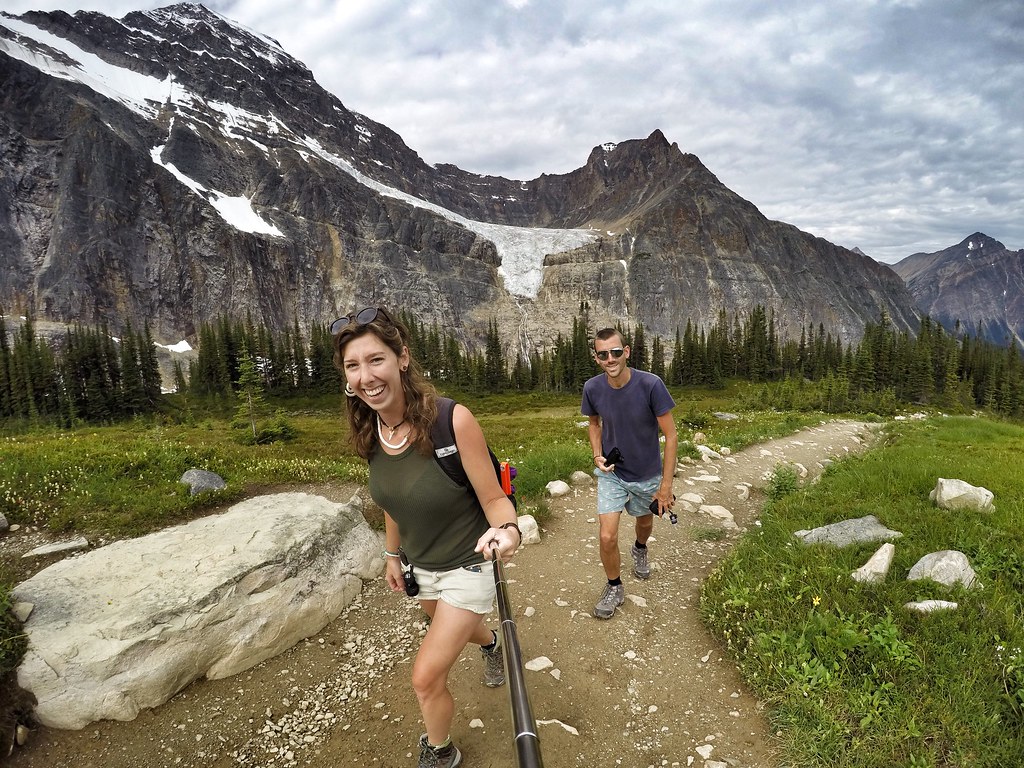 After only a short distance we had a fantastic view down to the pond which was now a milky green colour. We soon entered the alpine meadows and they were nothing like I expected. I was envisioning an English meadow with overgrown grass, dandelions and daisies but these were more like low shrubs. The standout wildflower was the Indian Paintbrush, a bright red flower that made a beautiful photo with Mt Edith as a backdrop. There were also lots of yellow flowers, purple daisies and hundreds of teeny tiny pink flowers which looked like hanging bells. 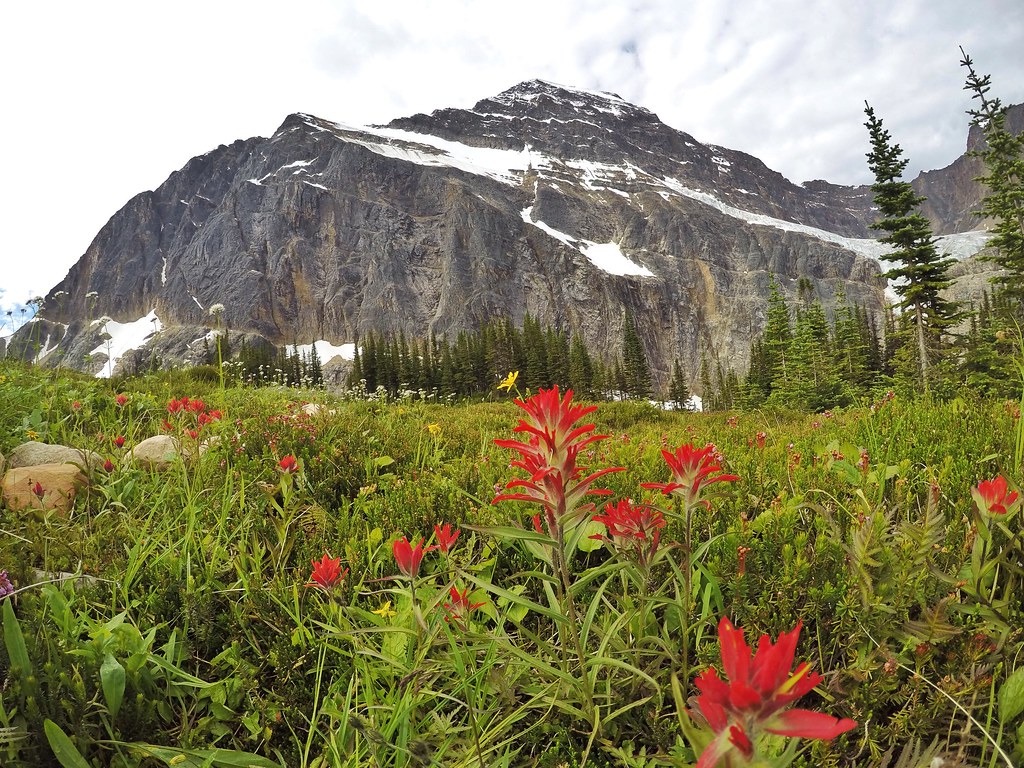 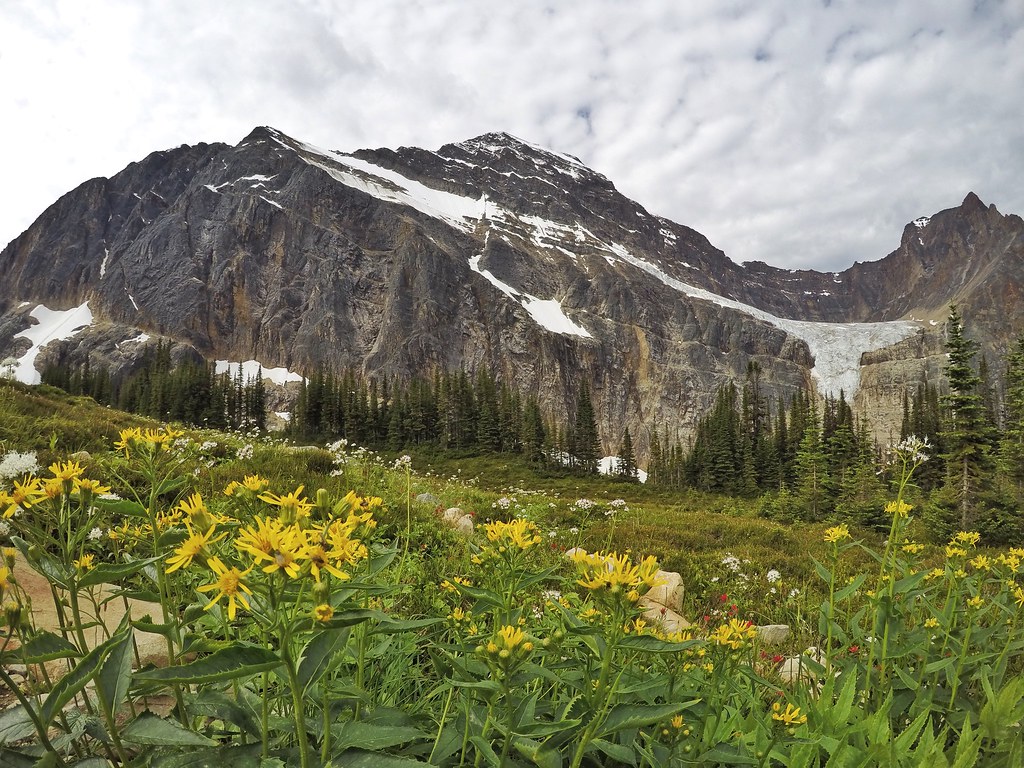 The trail climbed quite steeply up to the summit but I was stopping and taking so many photos that I barely noticed the incline. A final snaking line led up a dusty scoria hill to the summit with 360 degree mountain views. Mount Edith still dominated the view and occasional rumbles of rock slides and glacier carving filled the air. The hike had various loops so we had a different route back with more chances to bump into Mr.Bear (didn’t happen) and more wildflowers. The trail became really busy on our way back down and it drove us mad having to go snail pace behind people. One couple were clearly in their honeymoon period as they held hands while hiking…shudder. I barely used my bear bell as there were so many people hiking that there was no chance of surprising a bear but it certainly proved handy to notify people (slow walking couples in love) that two speed-walkers wanted to overtake. We also bumped into another romantic couple; two marmots who were actually fighting one another, they were standing up and interlocking teeth but in a photo it looked so innocent like they were dancing and kissing. 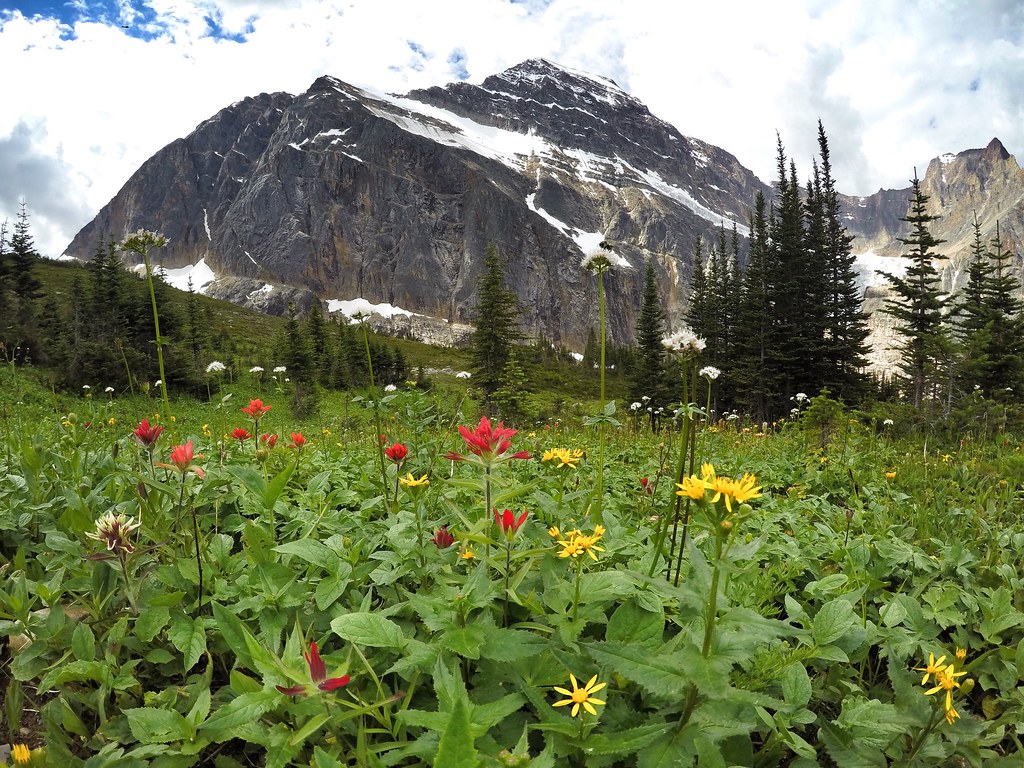 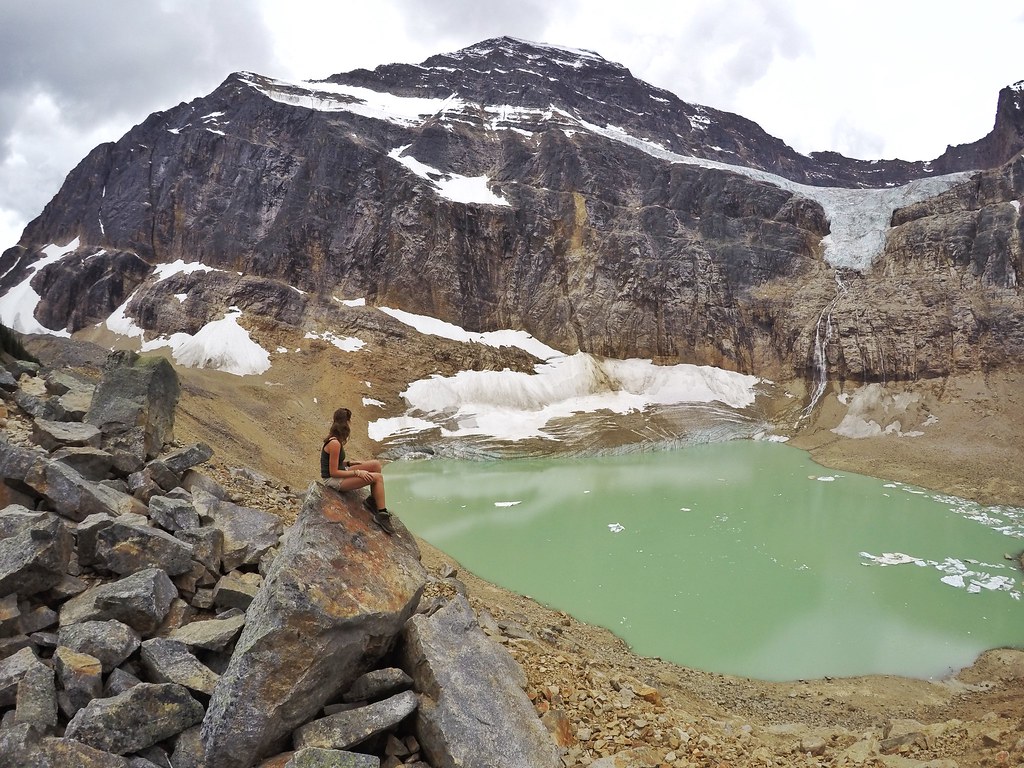 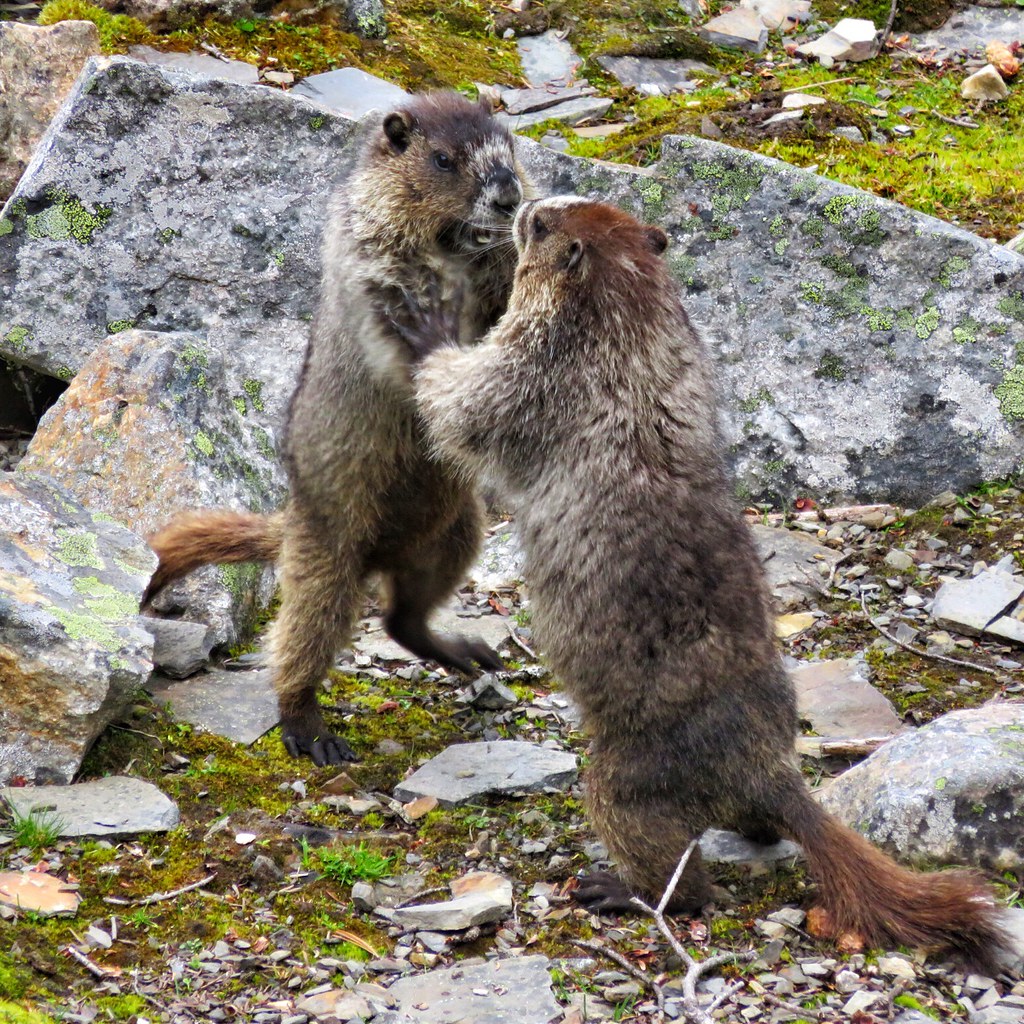 As we drove back down the mountain we came across a line up of cars, it had to be a bear but we had no idea which side to look. We had about 6 cars infront of us and a bunch on the other side too. In a split second we got a very brief glimpse of a black bear with two cubs running across the road. Thank god we’ve seen Bears already on this trip as I’d of been really disappointed with such a quick look. 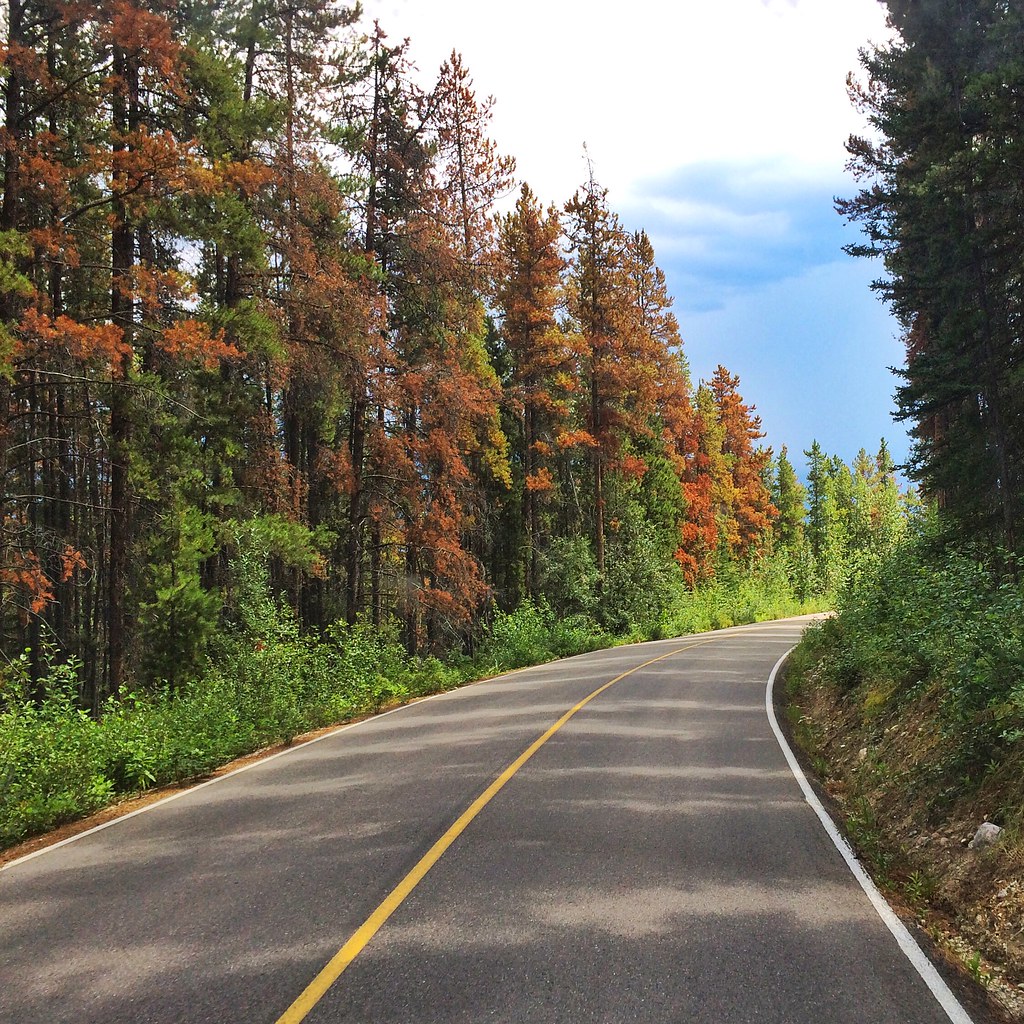 In the afternoon we strolled along the Maligne Canyon which was far too busy for our liking. The canyon itself was impressive though, beautifully curved and artfully carved by Mother Nature herself. 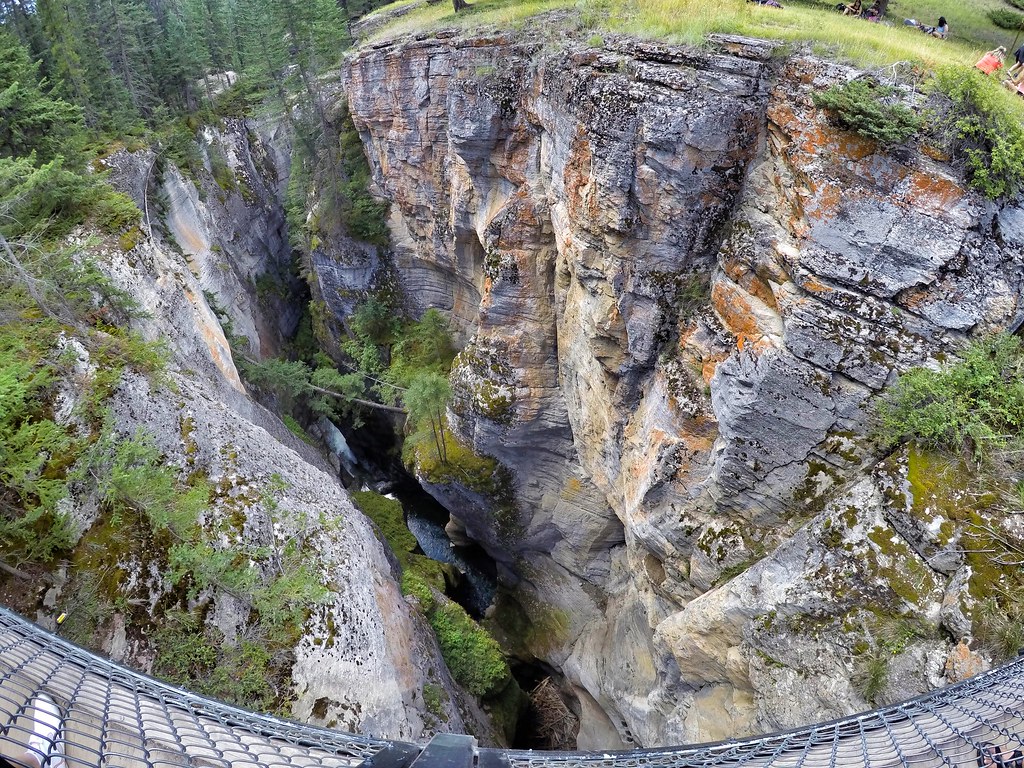 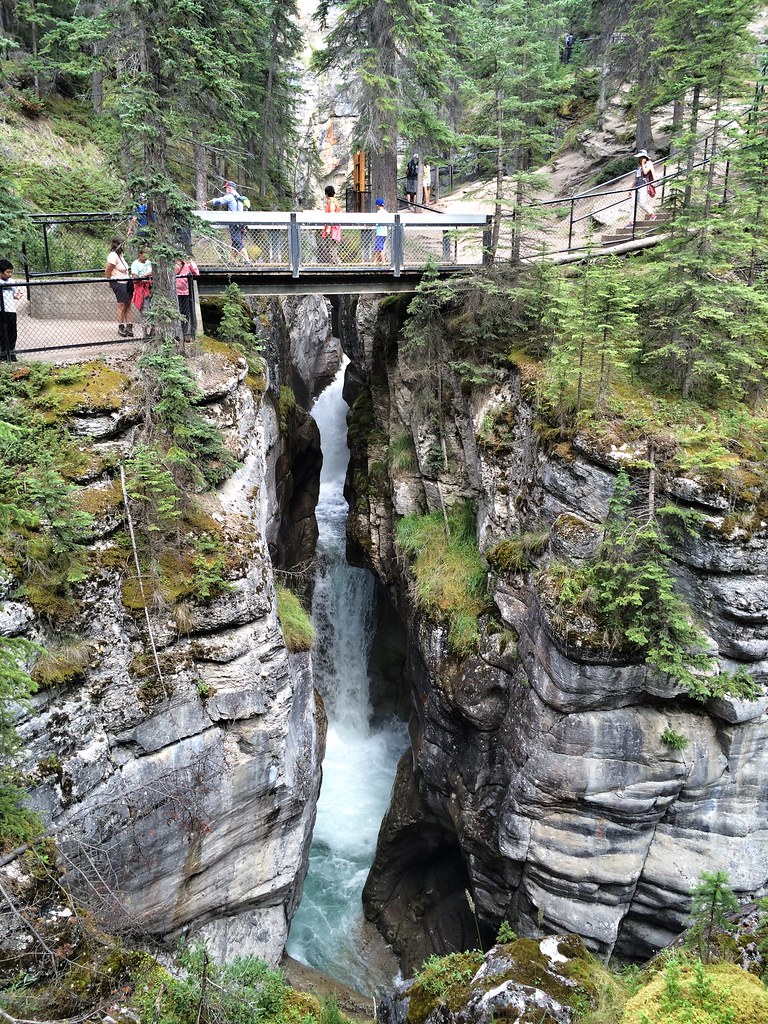 Daphne has been making some pretty clanky noises on dirt roads. Two nights at the Snaring Campground made matters 100x worse thanks to their road being like a patch work quilt that had been eaten up by mice. So we reluctantly decided we had to go back to Hinton and get her fixed. 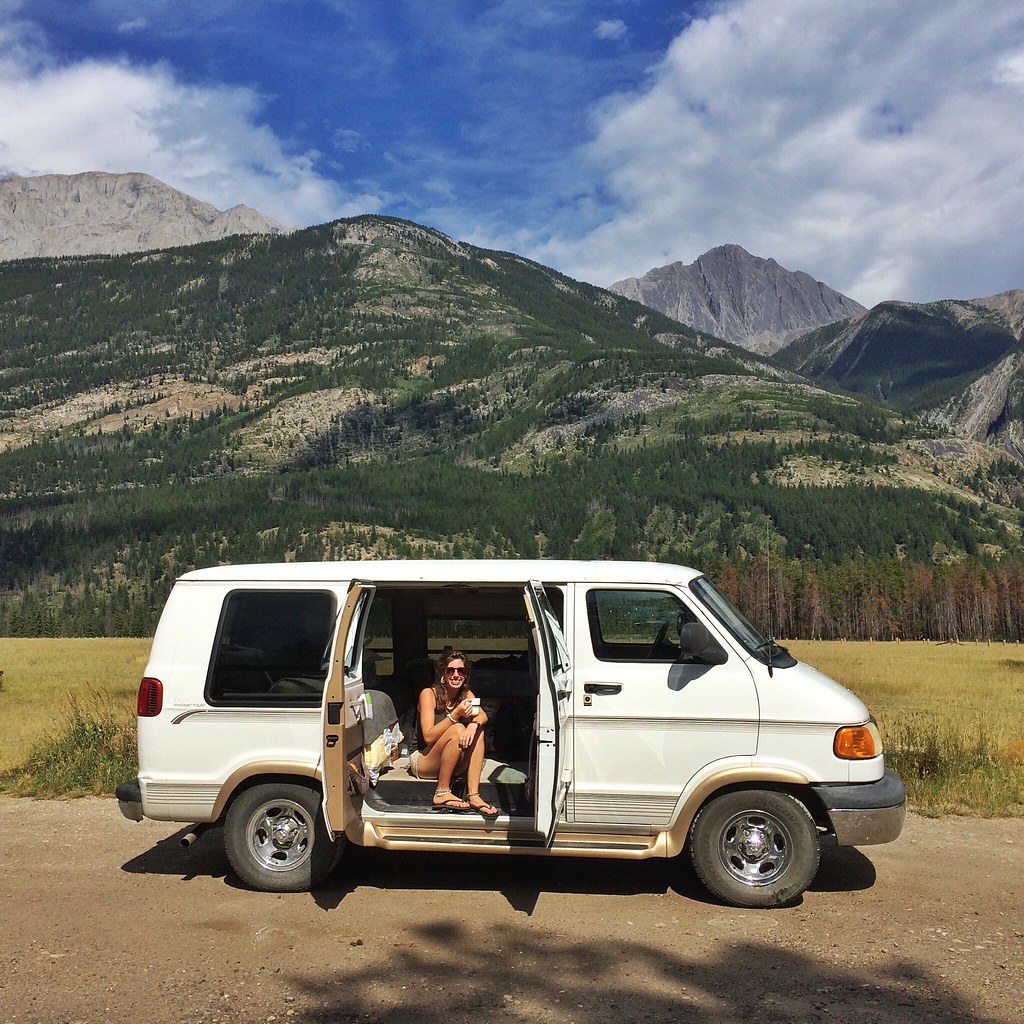 As we headed east towards Hinton we saw a large herd of Elk crossing the road ahead of us. There were just a couple of males amongst the herd of females and calves and every single Elk had the neatest little white pants on. 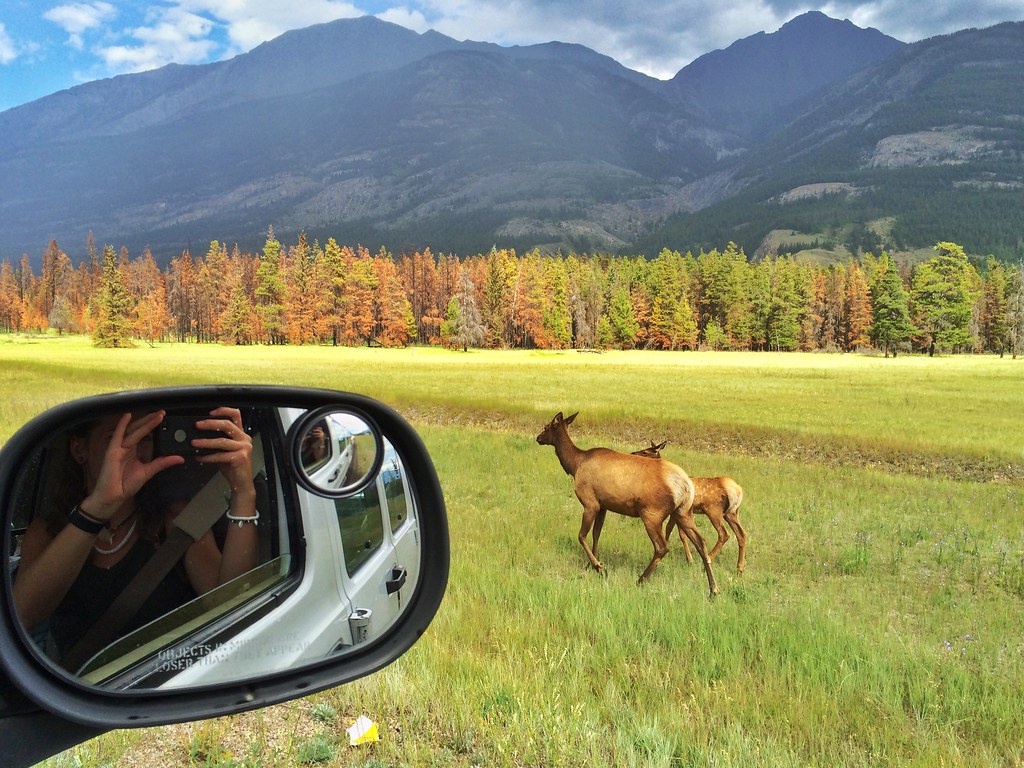 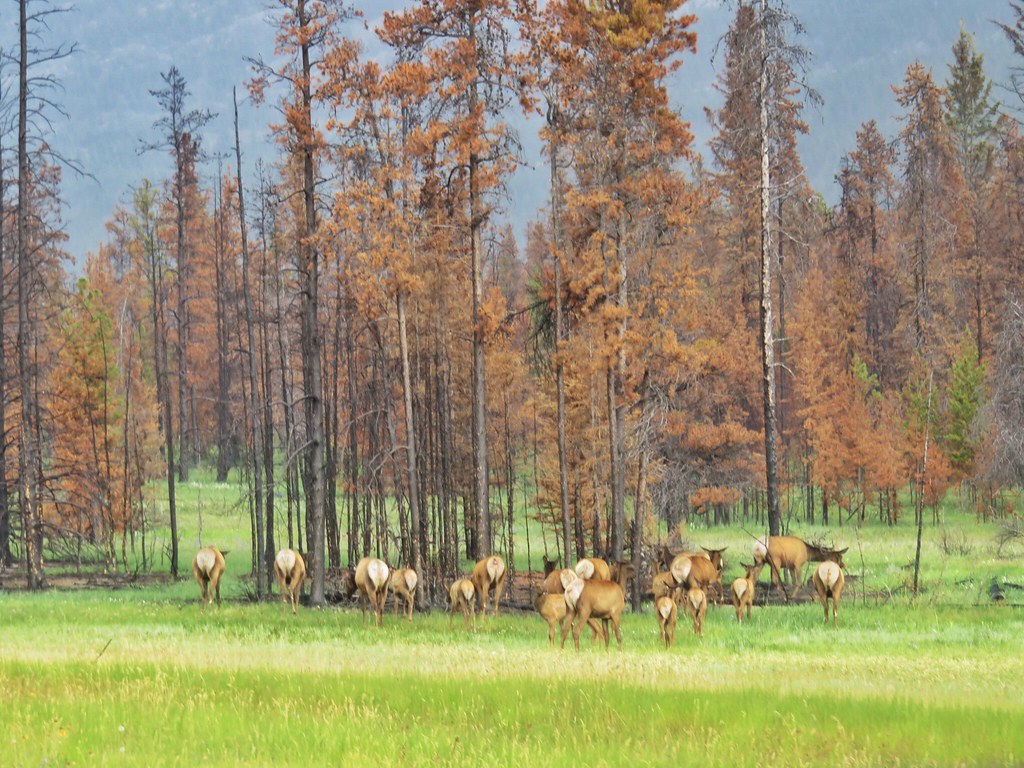 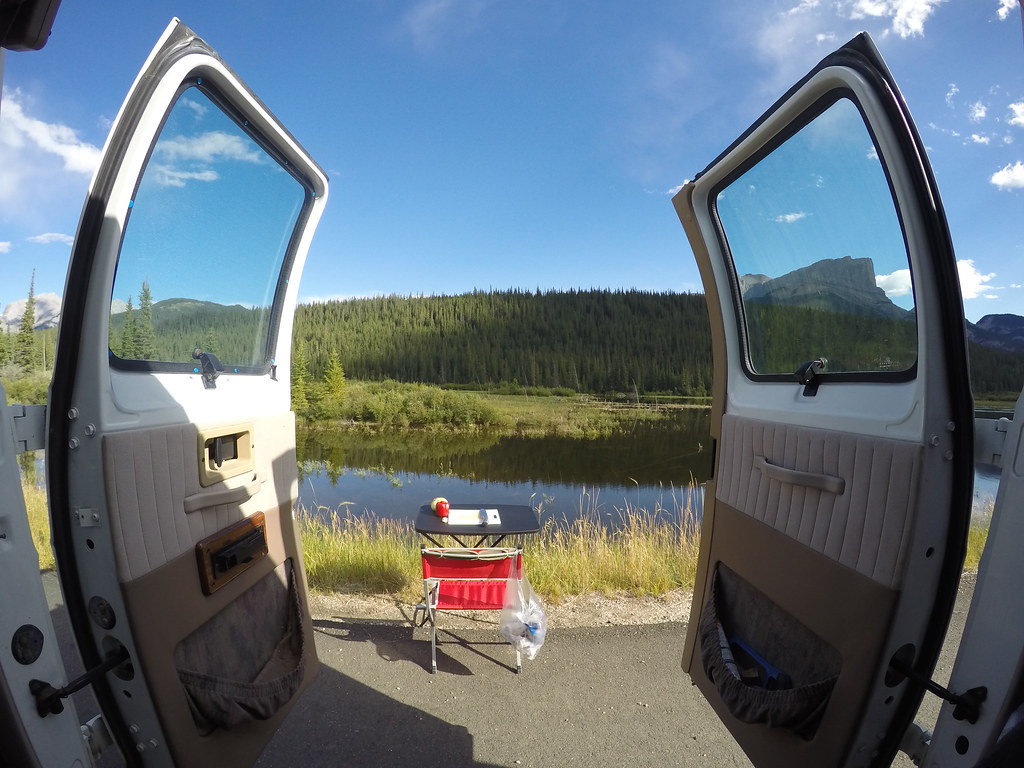 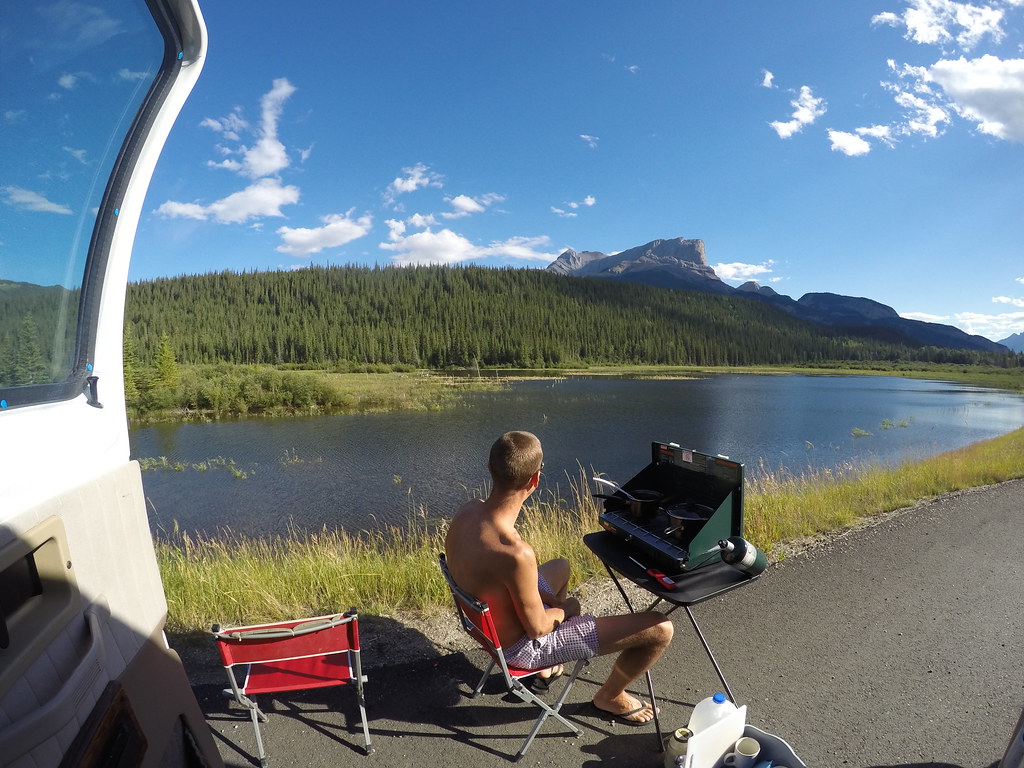 We managed to get Daphne a full inspection and she came out four hours later with a pretty healthy report. We needed new brake pads and a couple bits were worn on her undercarriage but overall there was nothing to worry about. It was coming up to the bank holiday weekend (typical) so all garages were going to be closed. We managed to order the parts we needed and Craig attempted to change the brake pads himself. It was only once he had the first tire off that we realised our spanner kit didn’t have the right size! Goddam! So the wheel went back on and we went back to the auto shop. A chap in the queue must’ve heard our accents and asked if we were having troubles…”yes…why is it written on our faces?!” He said he could do our brake pads and idler arm for us…and we stood there pondering…”are you a mechanic or you just a man who know a bit about cars?”. Turns out he knew quite a lot, he was a field mechanic for trucks and had a proper shop at home. So we took a whim and followed a stranger to his house. As we pulled up I saw a kids trampoline and swings in his yard and said to Craig “ah he’s got a family! That makes me feel safer. Either that or he’s a pedophile luring in children…”. You’ll be happy to know he wasn’t, and was in fact a very lovely man. He changed the brake pads in the pouring rain as his shop was already full and after having a good look underneath he said everything was fine and there was no need to replace the idler arm. So that was very promising. He quoted us $100 for the work and very kindly only charged us $50 which was so nice of him. There are some very friendly souls out there.