We arose before most of the other campers and set off on empty stomachs to Maligne Lake. We stopped half-way at Medicine Lake for some porridge, coffee and lovely views and continued onto the very popular Maligne Lake. The Bald Hills trail sounded like a great hike for a few hours so we set off and followed an abandoned fire road until we found a steep shortcut up a narrow path. It led through what looked like a Christmas tree farm so Craig and I spent a big chunk of the hike pointing out our favourite trees; the biggest, most symmetrical one for a home and a miniature one for Daphne. 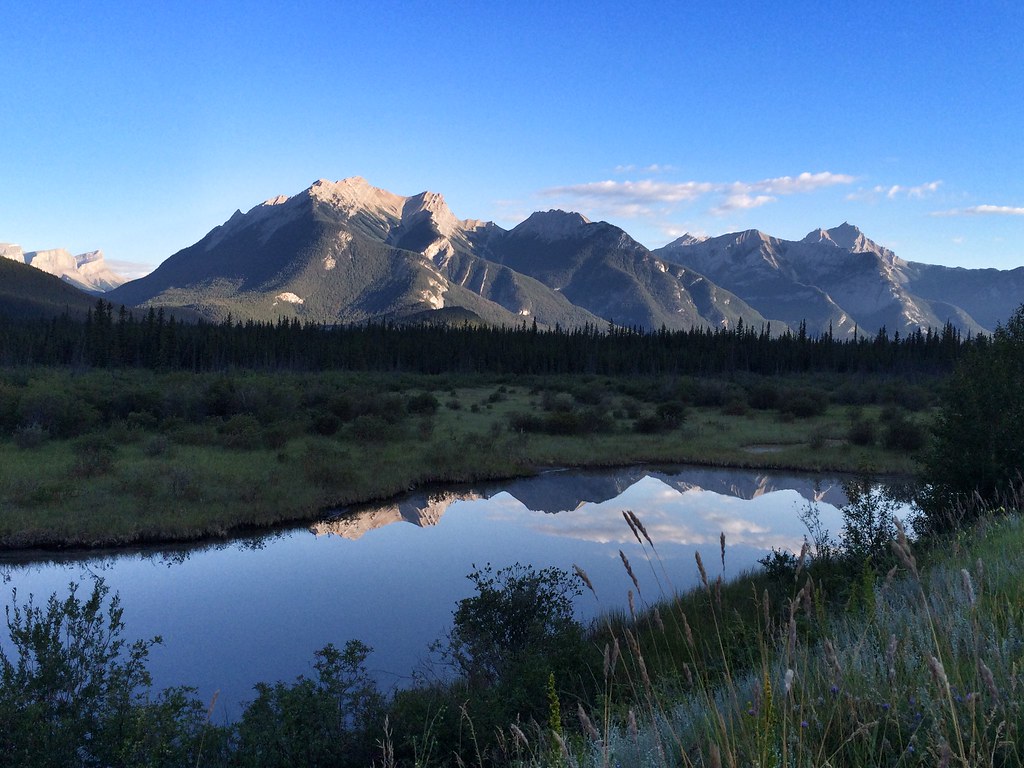 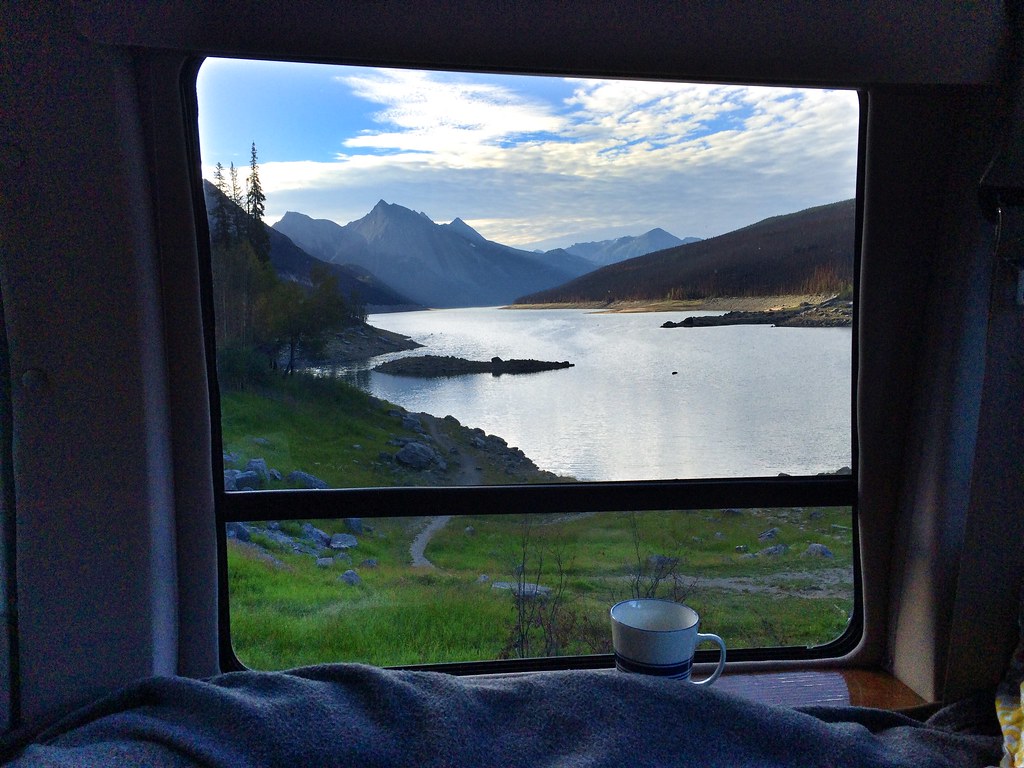 Maligne Lake soon came into view and was a vibrant blue colour. A final uphill slog to a large cairn led us to believe we’d reached the summit but it was one of those fake ones that I so love to hate. The views were already spectacular though, especially the Maligne Range that had just come into view. The creased and cracked mountains led down into a beautiful forested valley with a snaking river. We had a final push uphill to the actual summit and as we gained elevation we could see our rocky goal. I pointed out to Craig that the rocks looked like the perfect silhouetted profile of a man wearing a cowboy hat. So we enjoyed lunch on the brim of his hat and soaked up the views. The mountains around Maligne Lake were a little hazy and I can only imagine how good they’d look on a crisp day as there were so many sharply pointed peaks. 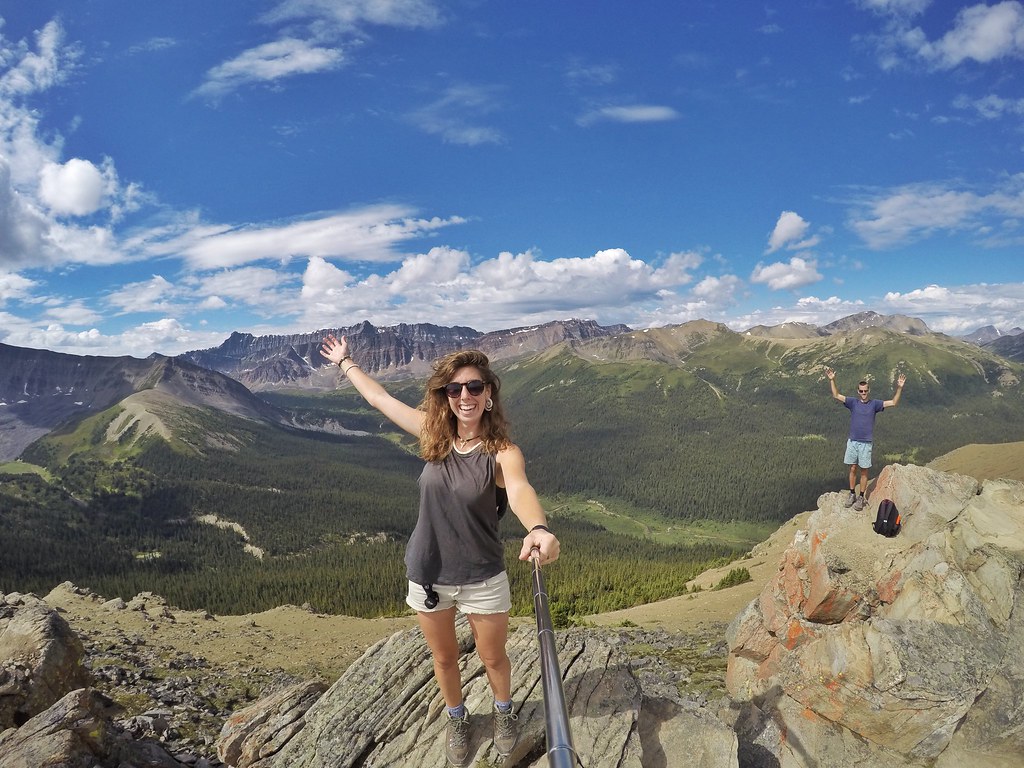 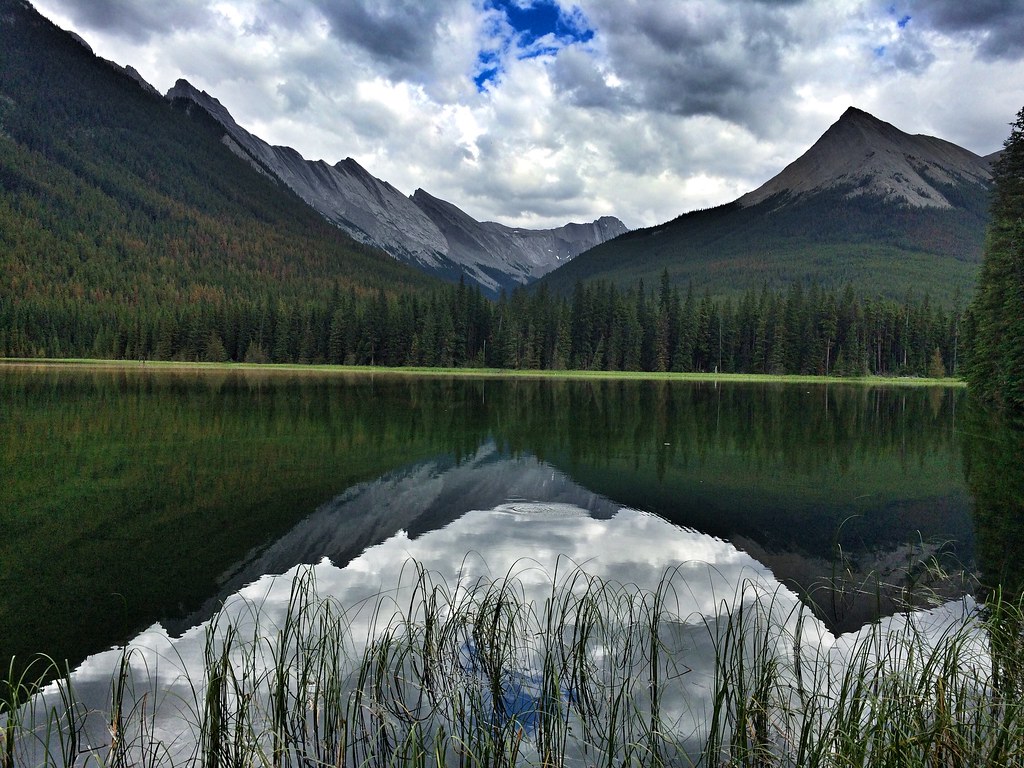 The walk back seemed to take forever as we missed our steep shortcut. Maybe all the hiking yesterday caught up on us too but we were pretty shattered. We left the busy lake and drove north stopping at a lesser known spot of Jasper National Park; Beaver Lake. A tea break gave our legs time to recover and then we set off. The hike was actually 20km long passing a few lakes but we just went to the first lake which was a very leisurely 4km stroll in flip flops. We were amazed at how peaceful the hike was, we only passed two other people yet the scenery was awesome. Giant rocky mountains shot up from the lakes edge and reflected in the calm waters. It was perfect. 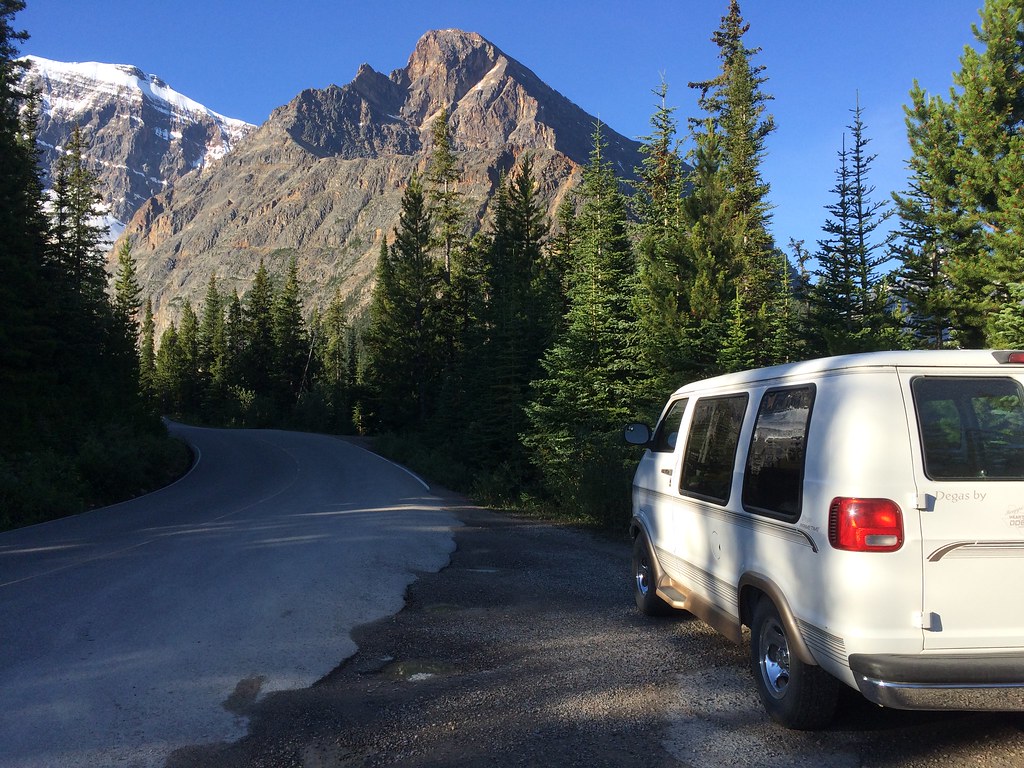 We continued the lake theme by having dinner at Jasper Lake. It was strangely shallow and attracted lots of visitors who waded far out into the lake. I think it should be renamed Jesus Lake as everyone looked like they were walking on water. A group of adults had even taken their camping chairs into the lake and all casually sat chatting away with water up to their ankles. Even though the lake was shallow it was surprisingly cold and we wanted a swim so drove a little further and came across a small parking area for Talbot Lake. We were the only people there and it was an awesome area to swim with a big sandy hill to run down before launching into the water. It was crazy how we had such a nice spot to ourselves whilst everyone else followed one another like sheep to the shallow lake across the road. 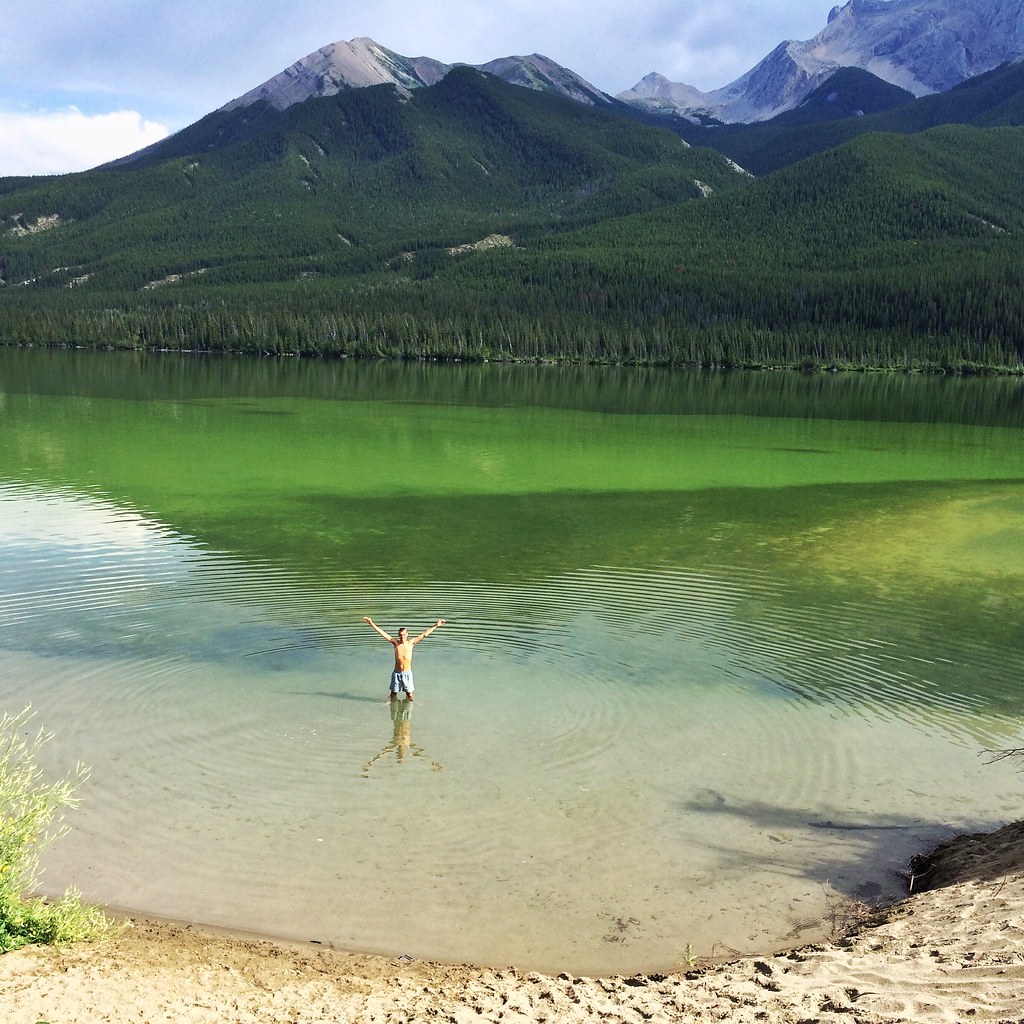 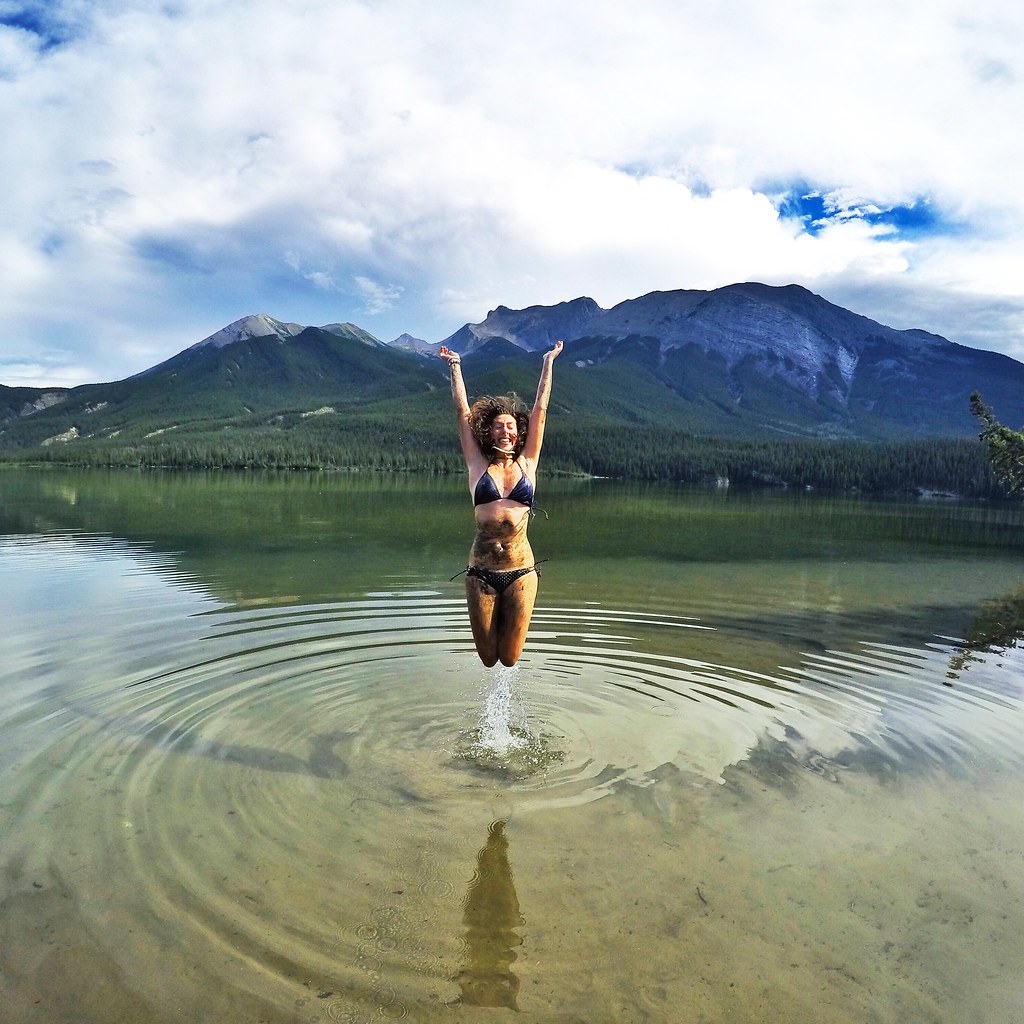