I don’t know if it was the blue skies or just the pure happiness of being back in the mountains but we had quite the spring in our step as we climbed 2200ft up the Sulphur Skyline. It was our first hike in Jasper National Park and we’d woken up at 7am which was a little tricky after living without an alarm for two months. Somehow we just plowed up, overtaking lots of people and making it to the top in just over an hour. The gradient was very friendly on the legs which meant we barely stopped but sweated buckets in the sun. I started to wonder why no one invented deodorant for the eyelids…how the heck were my eyes sweating?! 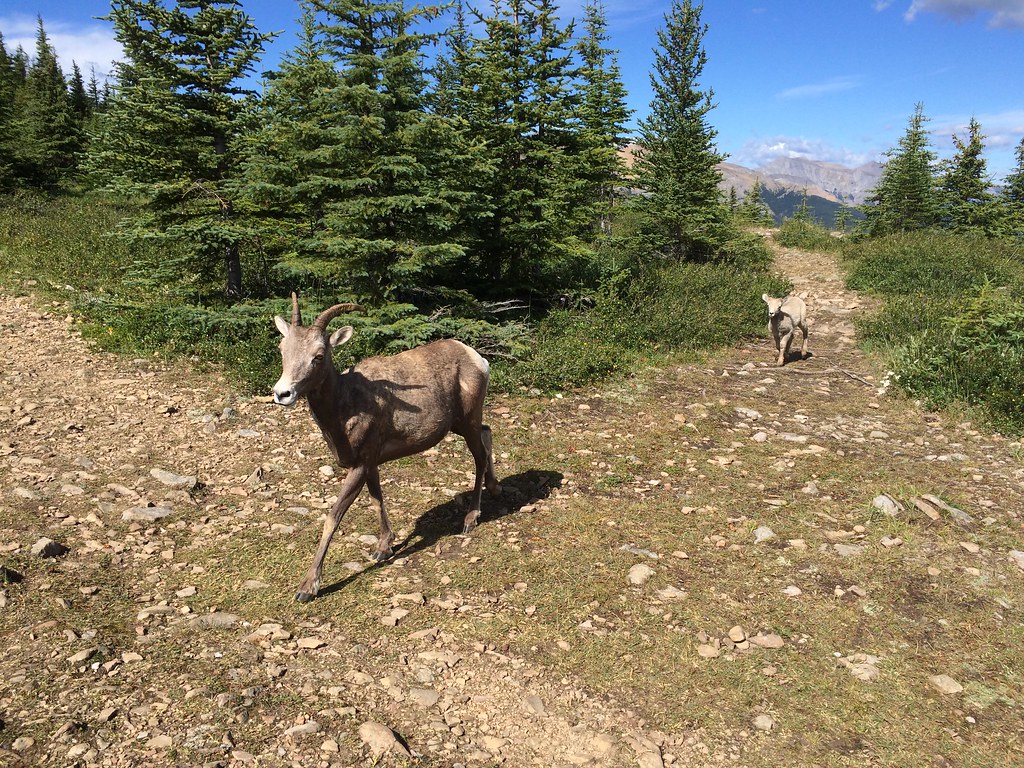 A big horn sheep and lamb confidently walking our way. The views were incredible; everywhere we looked there were mountains, they almost wrapped themselves around us like a blanket. Some were close and towered above us while others faded down into the forested valleys with wavy ridge lines and pointy peaks. One area had lots of pyramid like mountains with a river winding through the valley below. It was just fabulous and a cracking first hike in the national park. We sat and enjoyed some snacks whilst a chipmunk scurried over our boots and up our bag searching for crumbs. 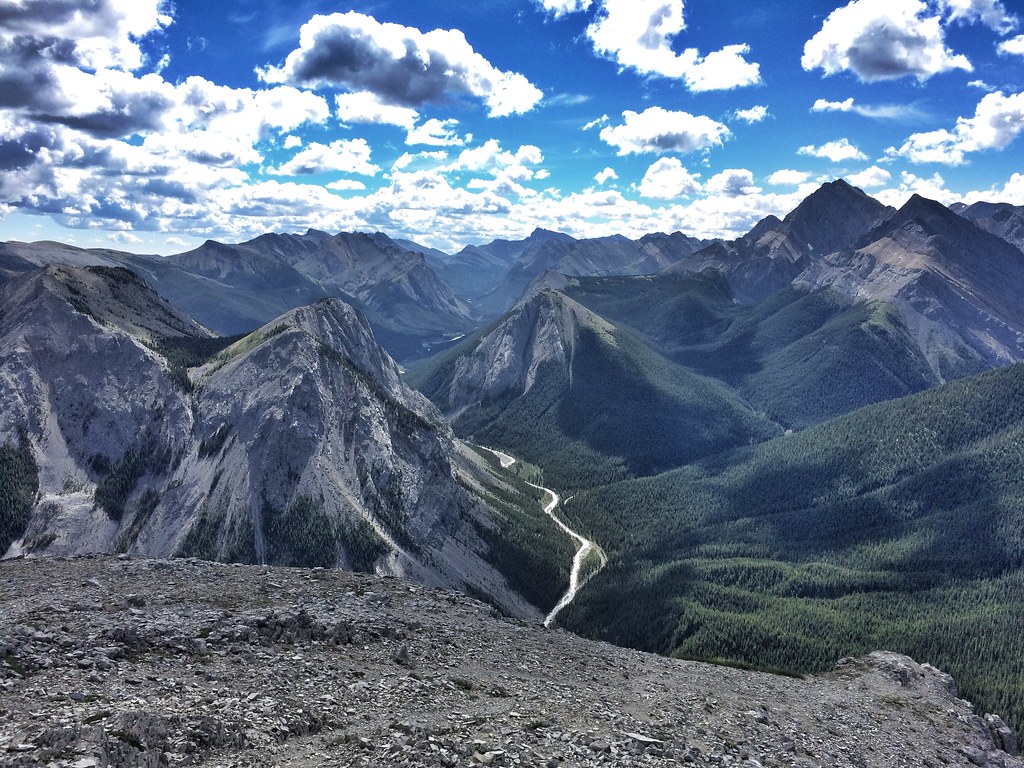 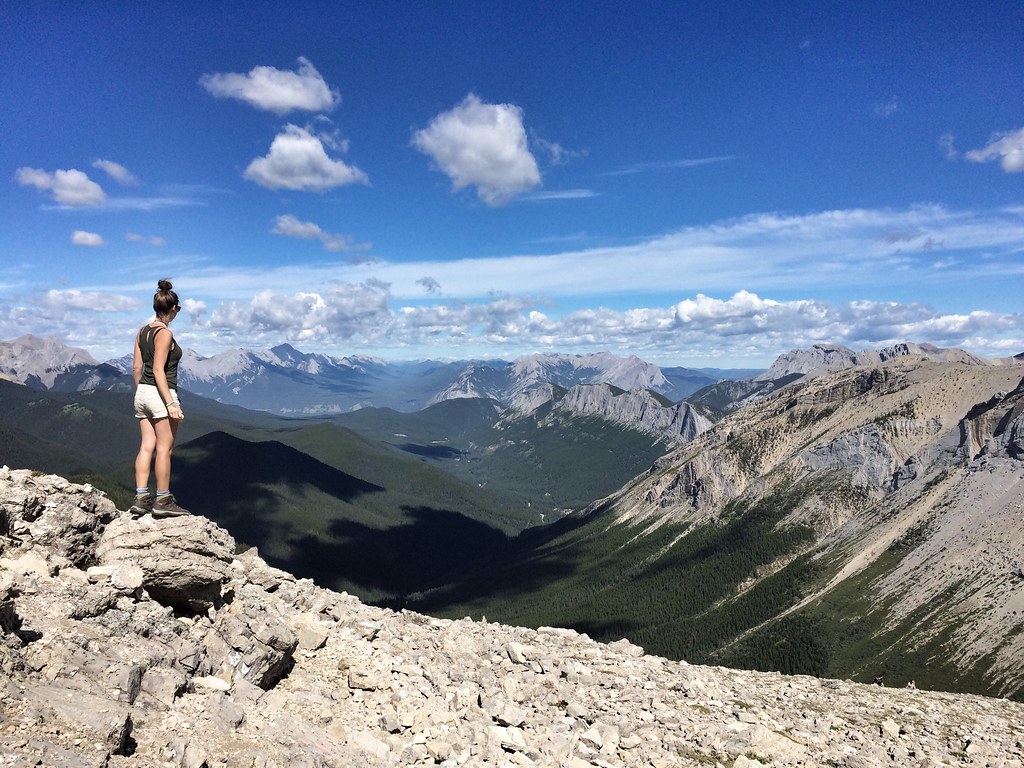 Because we’d woken up so early we still had lots of the day left so enjoyed a drive after lunch to the ‘valley of five lakes’ trailhead. We passed a beautiful male elk standing beside the road which was nice and eventually arrived at a full carpark. Luckily someone left and we snatched up the spot before setting off on the very popular hike. It didn’t take us long to realise we’d somehow taken a wrong path as there was no one around for over a kilometre so we reluctantly turned back and found the crowds. 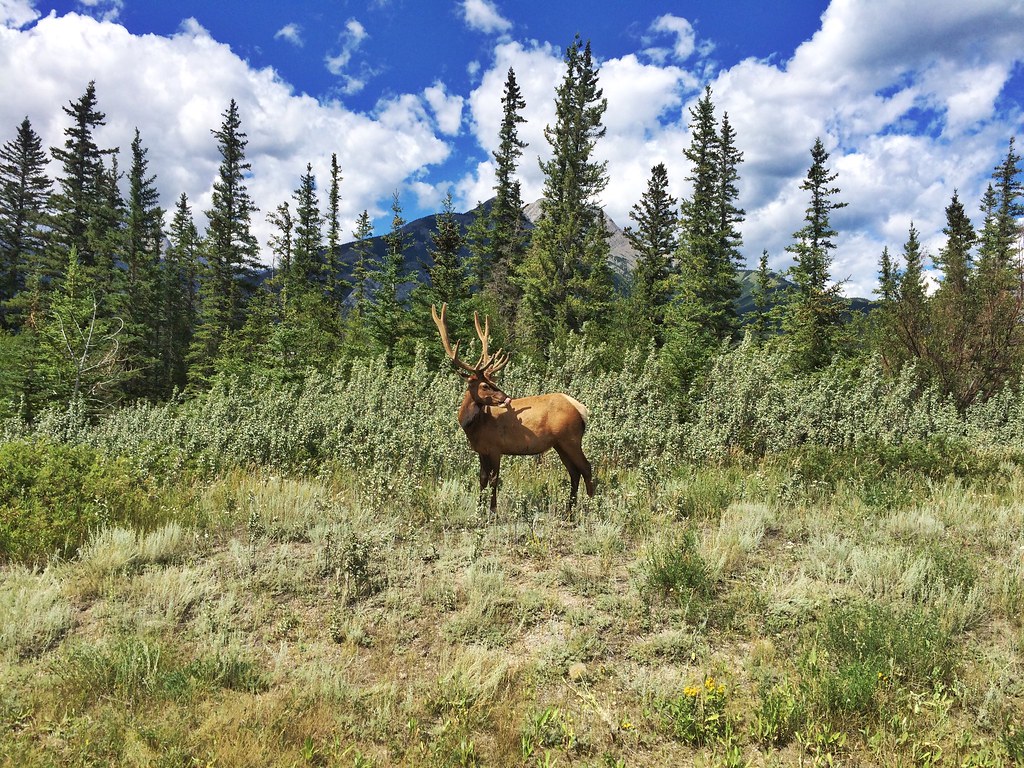 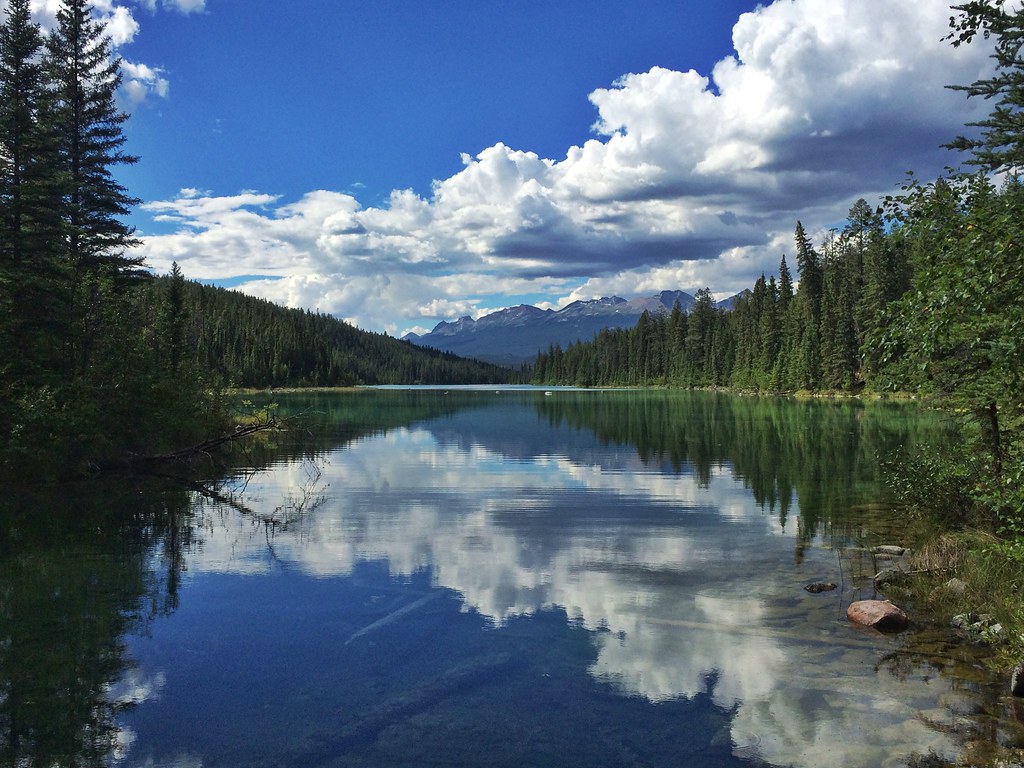 The trail went past five beautiful lakes, just as the name had promised. Lake one was a big clear turquoise lake with clouds and trees mirrored in its calm waters. 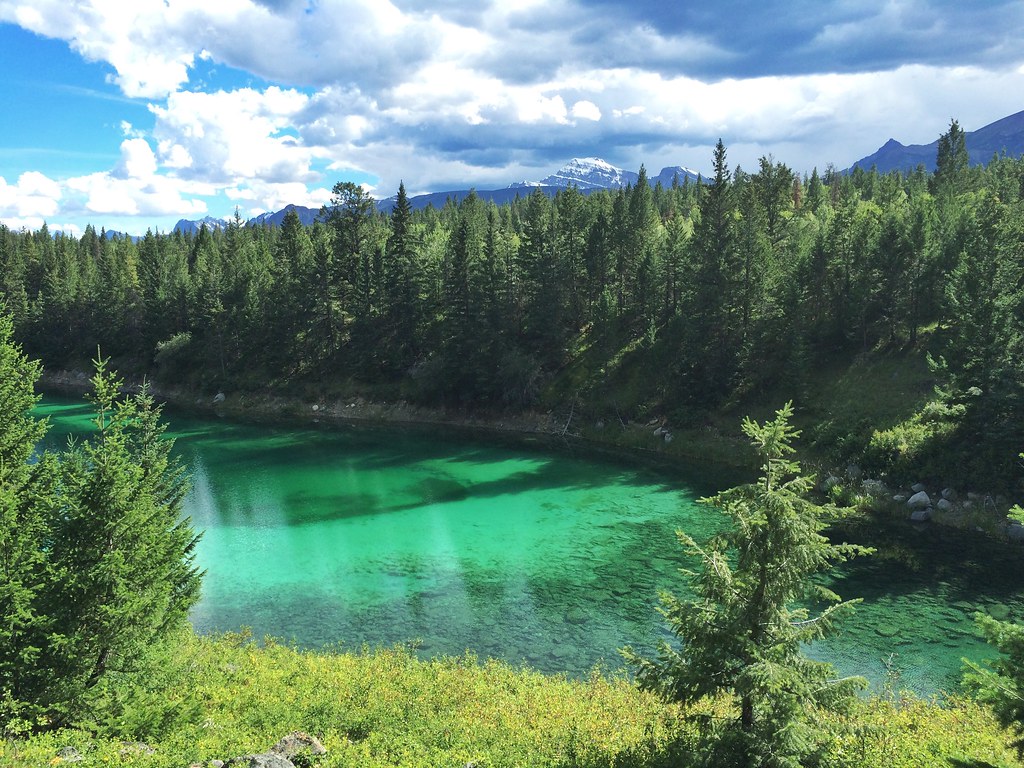 Lake two was fluorescent green with algae and full of eye popping colours. 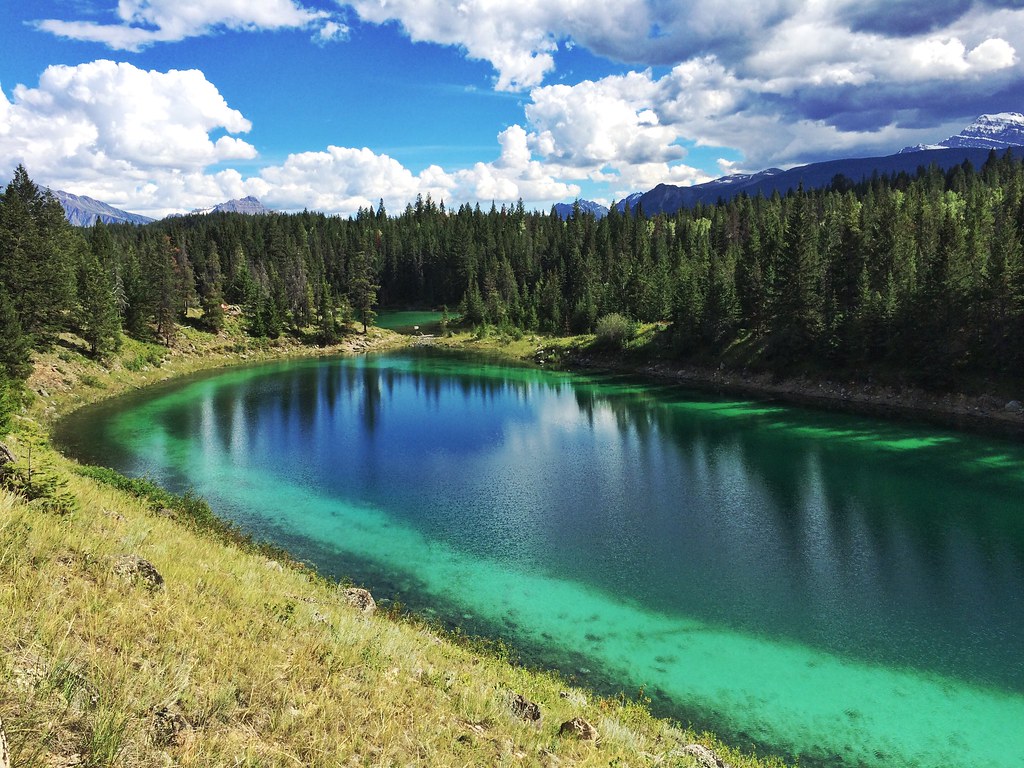 Lake three was by far the prettiest; the water dropped deeply down leaving a turquoise rim around the shoreline and sinking to a dark navy colour. It was quite the standout and attracted most of the visitors. Overlooking the lake were two red chairs, a feature around the park where people are encouraged to take photos of them in the chairs and share them on social media…so of course we took some photos and got rather carried away with awkward poses as we roared with laughter at our bizarreness! 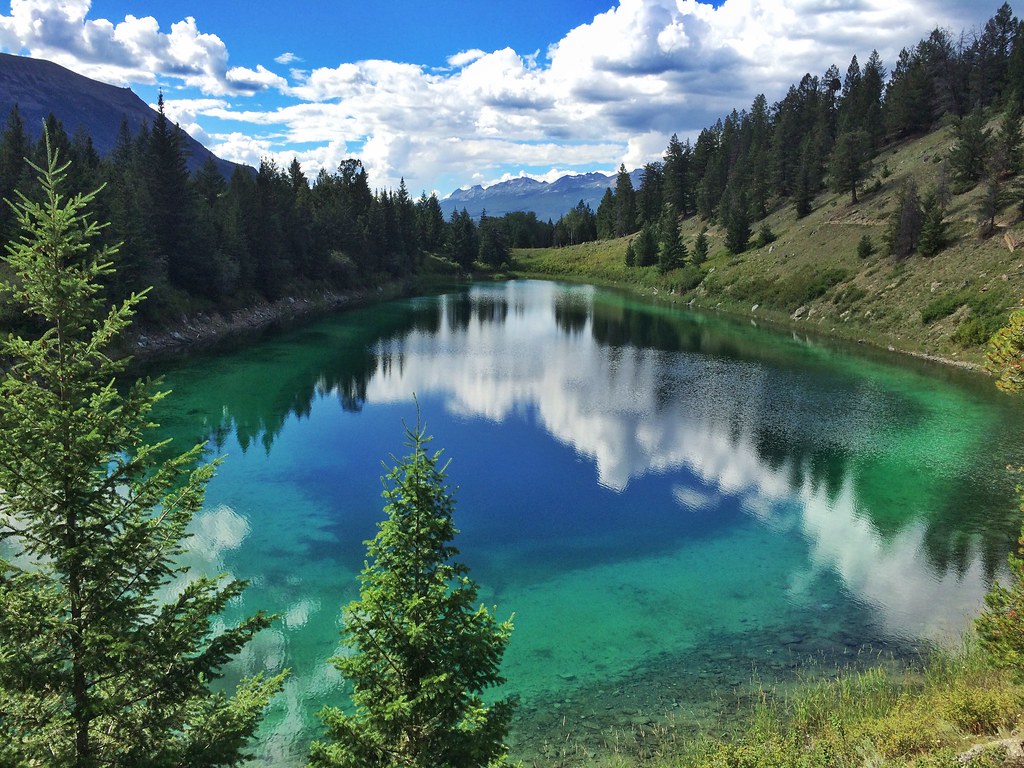 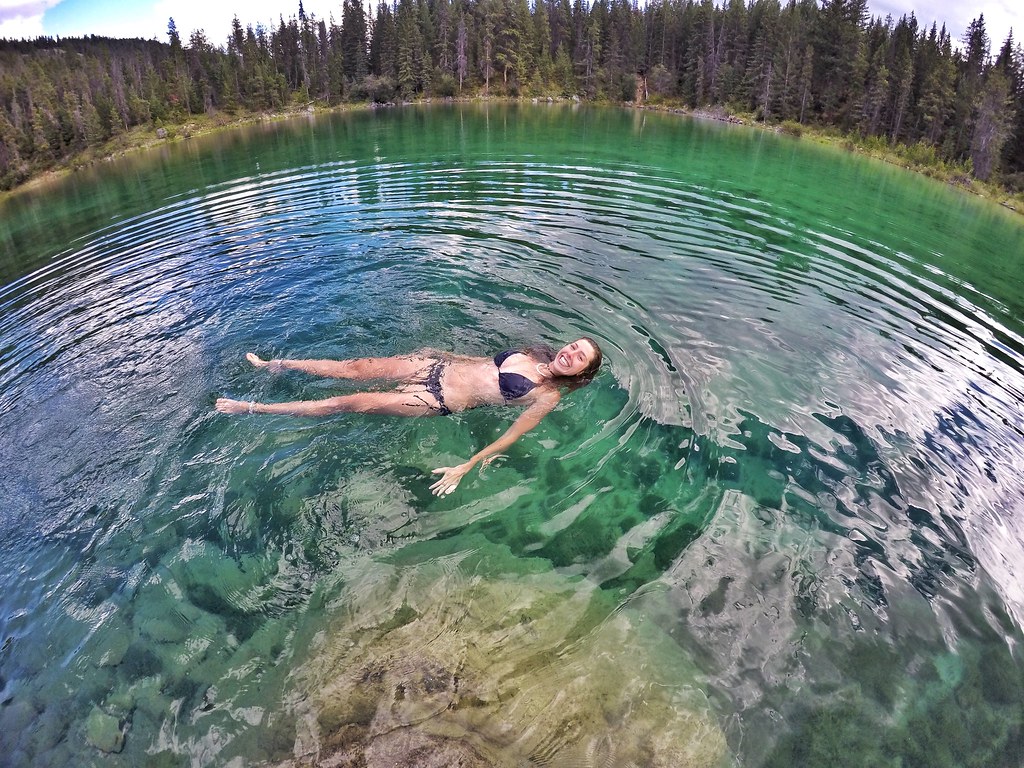 Lake number four was almost connected to three but very shallow in comparison. It was much smaller with beautiful clear turquoise waters that were very inviting for a swim after our sweaty day hiking. We had the lake all to ourselves and found a perfect large boulder to jump into the water from. Boy did it feel good. We’d of loved to have spent longer in the lake but it clouded over and began raining so we got out and warmed up in the muggy air. 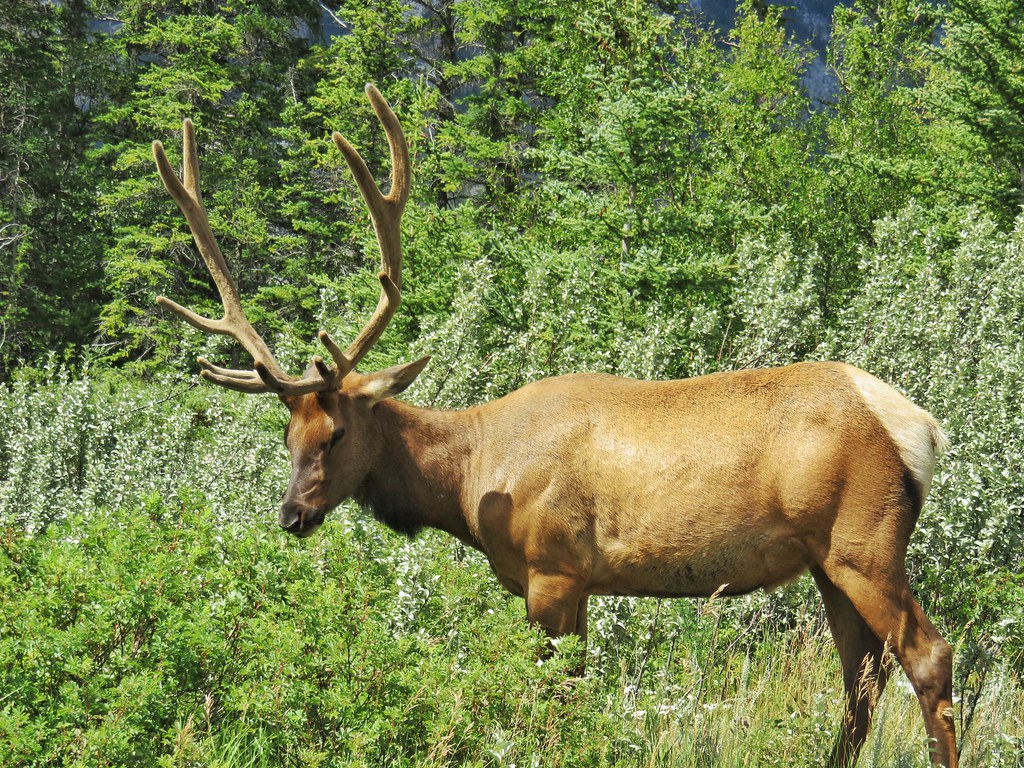 Lake five managed to fool us into following another wrong trail for a kilometre before again realising ‘where’s everyone gone?’ We’d already hiked a lot for the day so weren’t in the mood for detours. When we got back to Daphne it was close to dinner time so we decided to drive to Patricia and Pyramid lakes north of Jasper town. The latter was really busy with tourists so we drove back to Patricia and found a nice pull out by the lake to cook din dins.

As we drove to our campground for the night a storm began brewing ahead of us. The sun was slowly setting and the mountains to our right were glowing orange. Out the corner of my eye I spotted something strange in the left side and told Craig to pull over. The sun was setting behind a peak in a way that caused dead straight shadows of the mountain to shoot through the sky cutting lines across the yellow cloud. Wow! 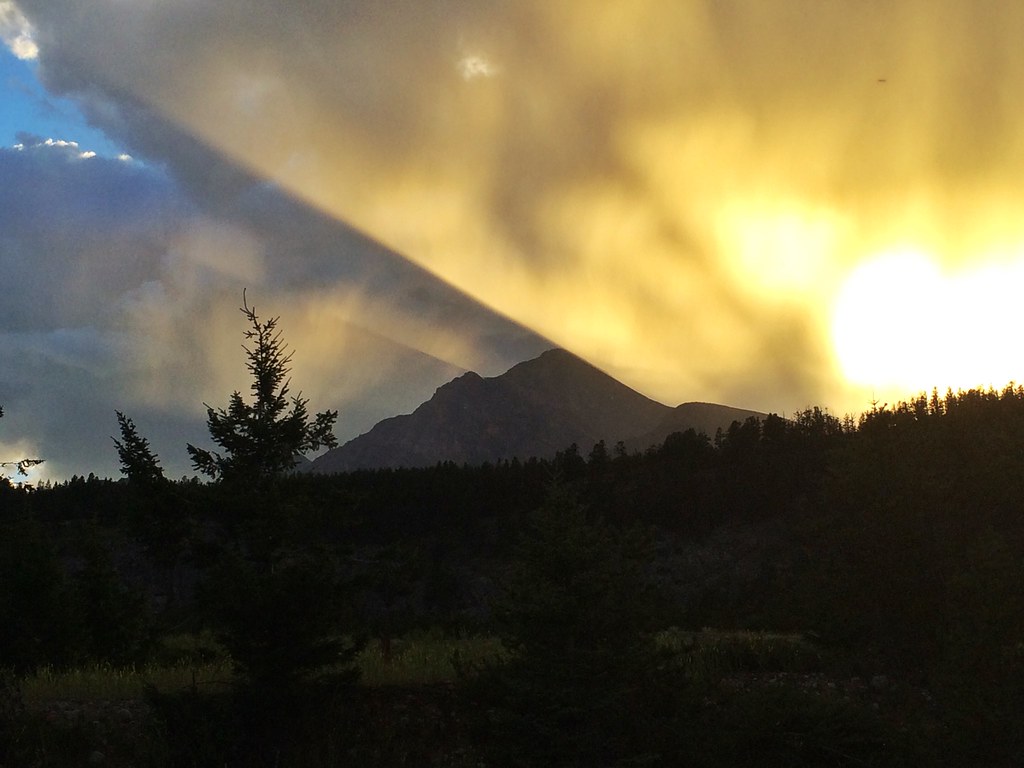 The storm soon created a rainbow that formed over the orange mountain range and as we drove along the horrendously bumpy road to the Snaring overflow campground the rainbow went on turbo drive. “Craig we need to pull over again!!” It was insane!! A double rainbow with the thickest, brightest streaks of colour through them. It was the best rainbow I’d ever seen! We spent a good five minutes snapping dozens of photos before setting off for the campground. I spent the rest of the journey commentating the rainbow status to Craig until we reached the campsite….”I think it’s getting better…it is! Oh wait, it’s fading…it’s AMAZING again…pull over again!”. 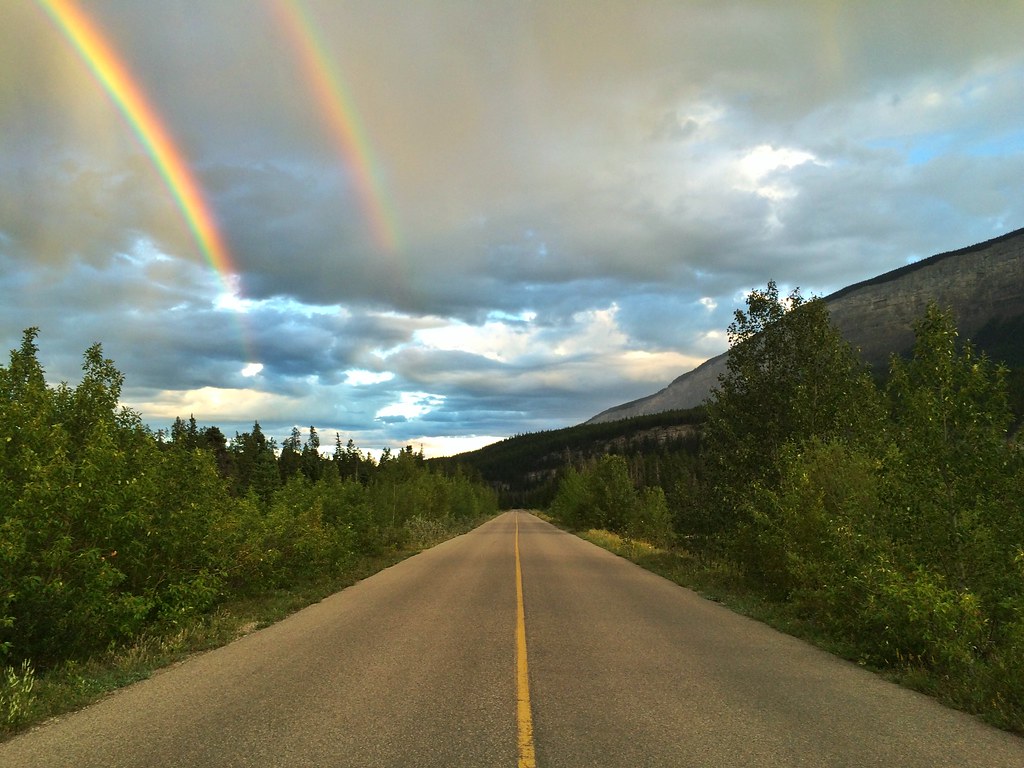 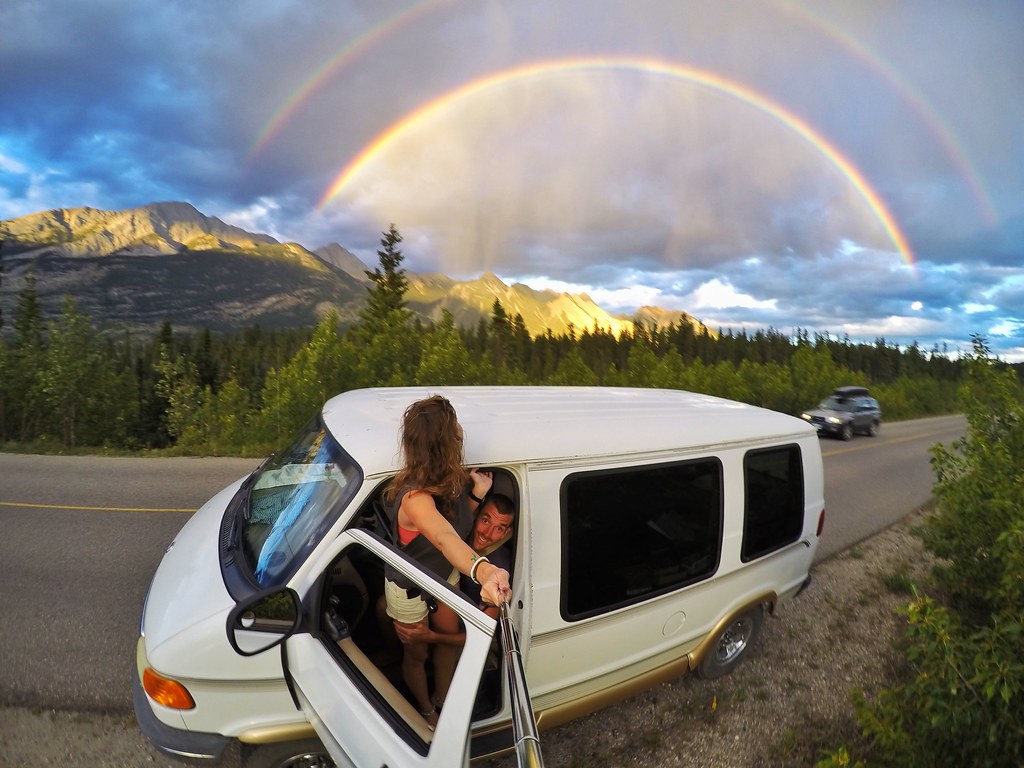 The overflow campground wasn’t as bad as we’d expected, it wasn’t a carpark but a large open area with a few hidden spots around the edges, lots of space in the middle and 360 degree mountain views. Part of the rainbow remained while the storm clouds turned pink as if by magic. It was one of the best sunsets I’ve ever seen thanks to it covering almost every corner of the sky. From a vibrant pink it moved around us turning fire orange and a deep yellow colour where the sun was dipping. But it continued around the other side which had a deep pink colour and fluffy clouds that dotted across the sky and turned almost red. It was phenomenal. What an incredible end to a perfect first day back in the mountains. 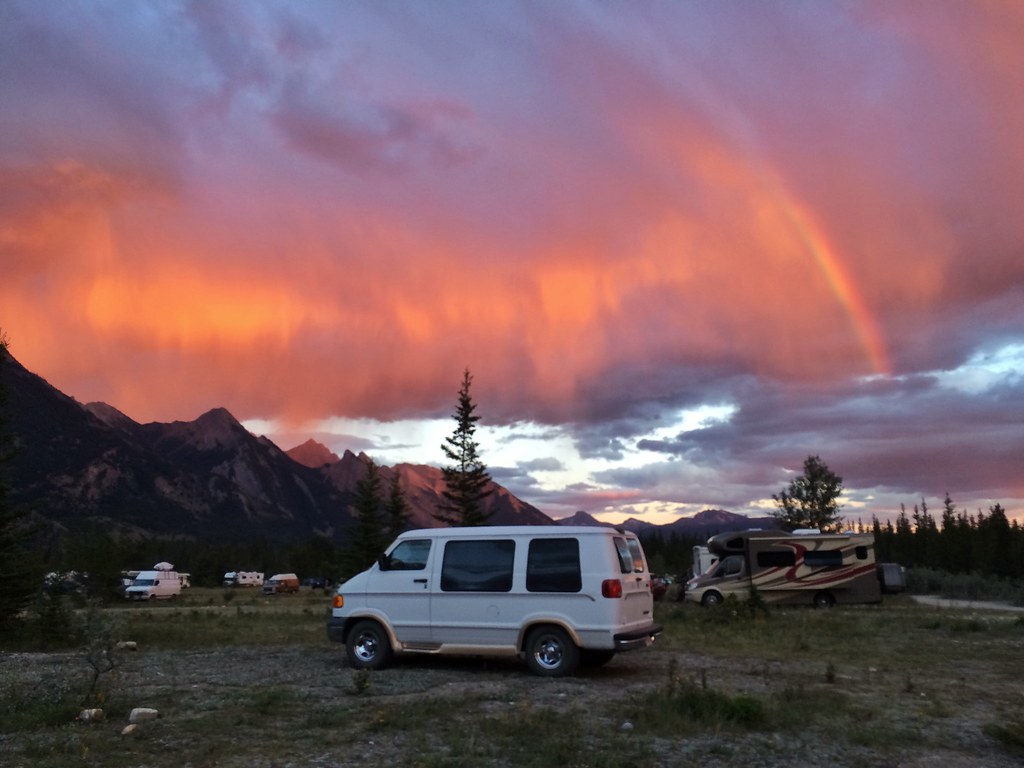