It wasn’t exactly a riveting drive south from Grand Prairie and truckers were constantly intimidating us in our wing mirrors. Things picked up though the further south we went. One lovely day was spent at the Sulphur Gates area of Willmore Wilderness Park, a true wilderness area that borders Jasper National Park but has hardly has any visitors in comparison.

We weren’t there to do a big backcountry hike so instead did a short trail to a variety of viewpoints with Rocky Mountain views. The final viewpoint revealed the clear Sulphur River converging with the milky Smoky River. It was a short but sweet walk, minus the three locals who brought a boom box along the trail with them. Nothing annoys me more. Why would you come to a beautiful wilderness area and blast out hip hop? OK so I’m sure the Bears would leave them alone but we can talk or use bells instead of blasting out swear words and rap. I’m such an old person at heart. 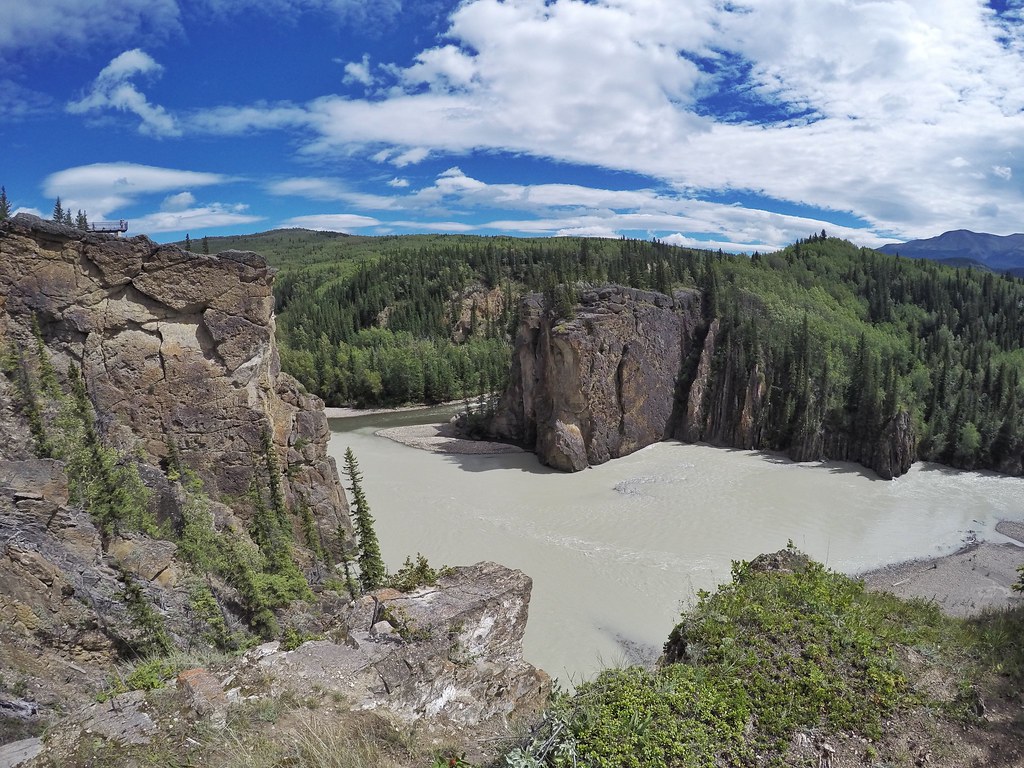 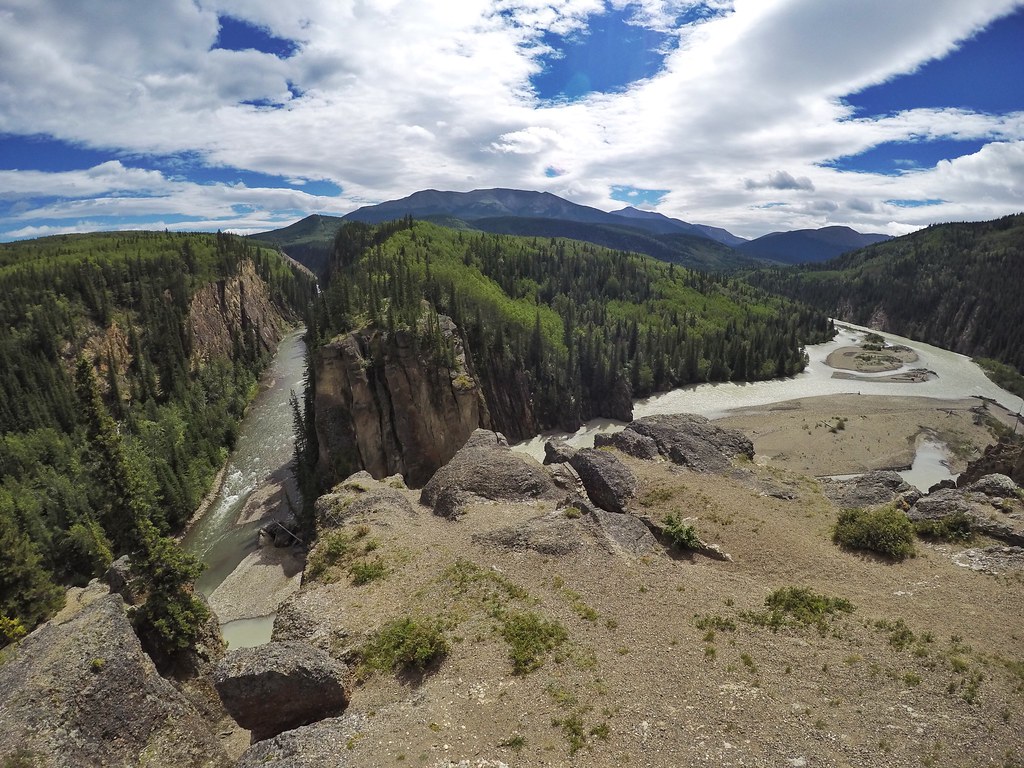 We decided to see a bit more of the park so did a 6km trail to Eason Falls. An old fire road was our pathway but it felt like a really bad rollercoaster ride as all we seemed to do was go steeply up and steeply back down the whole way. There was a pleasant detour off the trail where we got a nice view down to the smoky river and ate lots of wild raspberries which were delicious. Eason falls dropped down in layers through a sharp, rocky gully cut into the cliff edge. A ladder made a pathetic attempt at getting people up to the first layer but the steps were too far apart and the odd one was a trick step that hung loose. 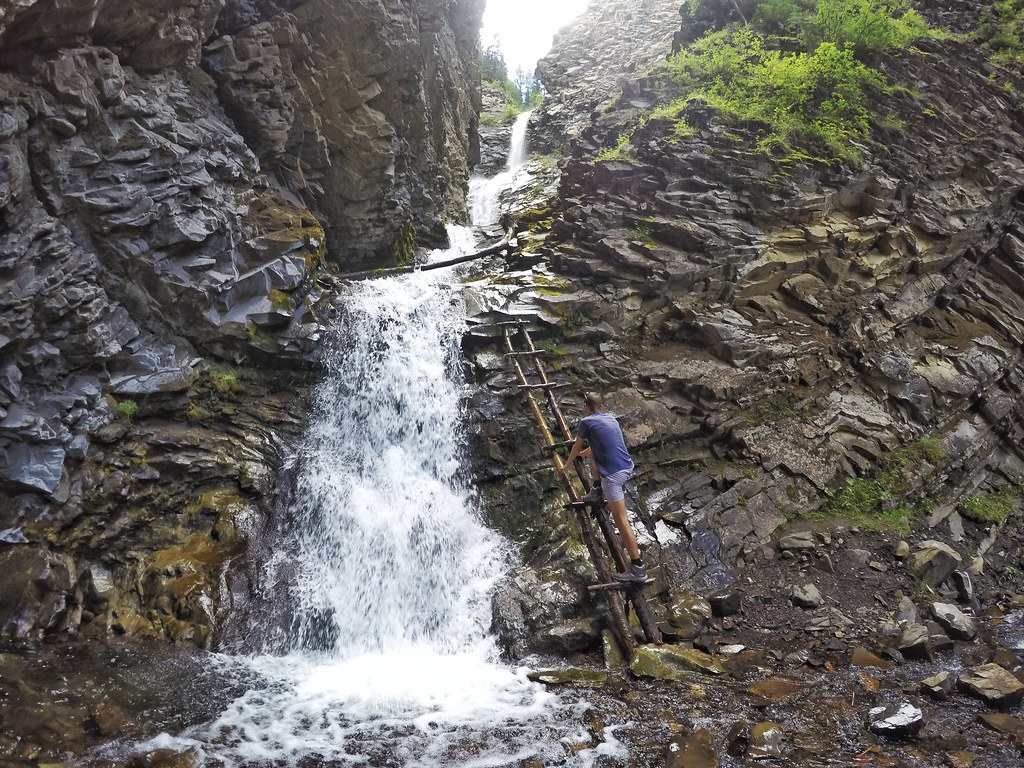 It was stinking hot in the sunshine and we found a nice shady spot to camp in some woods. Some kind soul had left a wooden pallet by a fire pit and it was a superb foot platform for our solar shower wash. 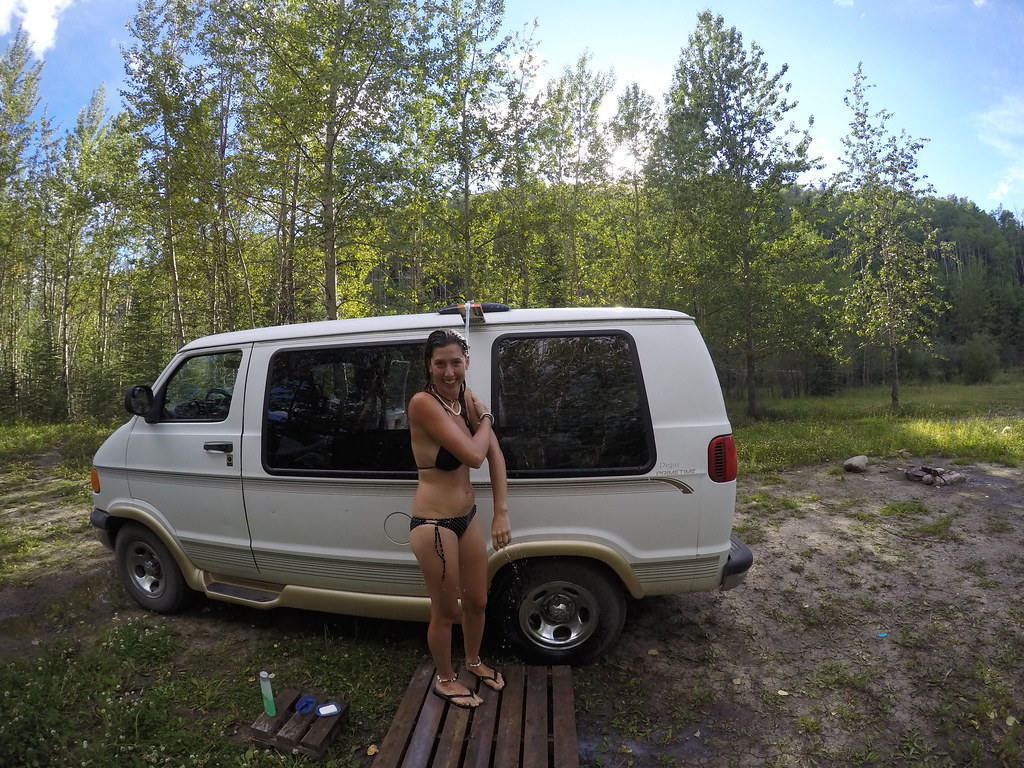 The next day we headed to William A. Switzer Provincial park. Inside the info centre was a huge grizzly bear, his body now just a rug laying atop a table with his head stuffed in an ”I’m gonna eat you” pose. It was probably the biggest bear we’ve seen on this trip; apparently he was an 18 year old so maybe the oldest we’d seen too. But we just couldn’t get over his head size. All the Bears we’ve witnessed in person have been fairly small, to the point that we’d feel mildly confident in a fight against them. But this one was how we imagined a Kodiak bear to look, i.e. the biggest breed of Grizzly, a goddam beast of a bear!

Anyway, we did a casual afternoon stroll around Kelly’s bathtub and Jarvis lake. It didn’t seem like the sort of area we’d come across a bear but a large fresh scat stopped us in our tracks. There was a meadow to our right so I guess he just traveled through but we were on the lookout for the rest of the walk and rather unsettled after seeing the dinosaur sized bear earlier. 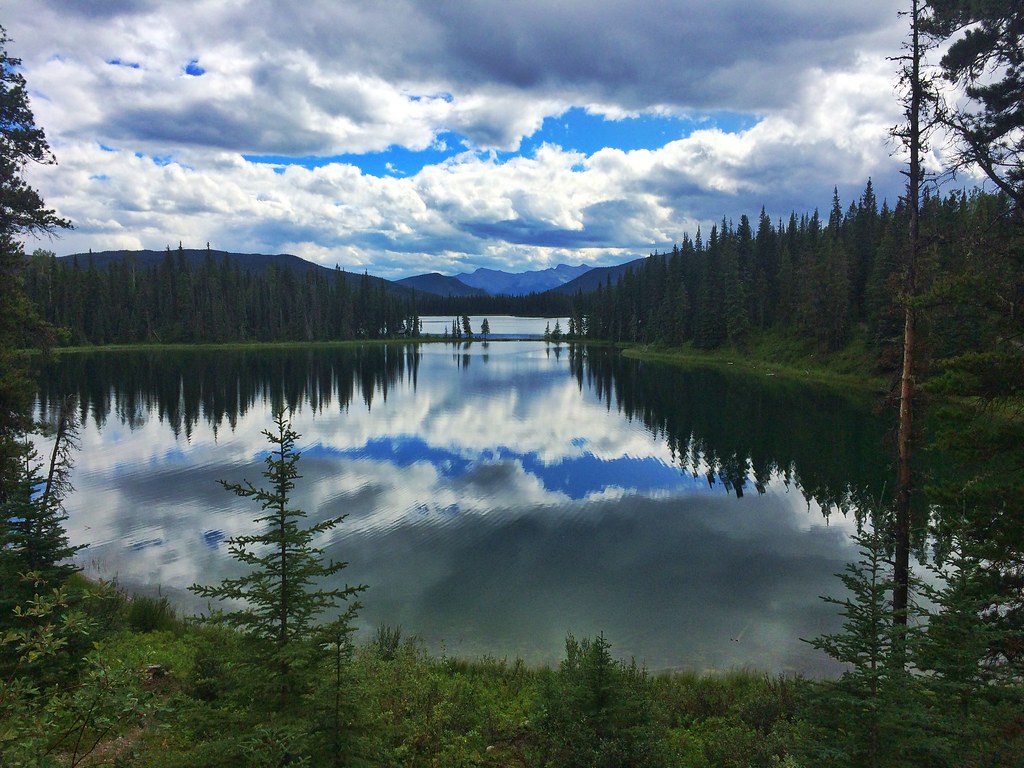 The next morning was perfect blue skies so we did the Athabasca Lookout trail, said to be a standout lookout of the area. It was less than 1 kilometre to reach the lookout but a steep uphill slog straight after breakfast proved a little exhausting. The view was pretty damn good though with a pristine jagged line of the Rocky Mountains laying ahead of us and dense forest below. 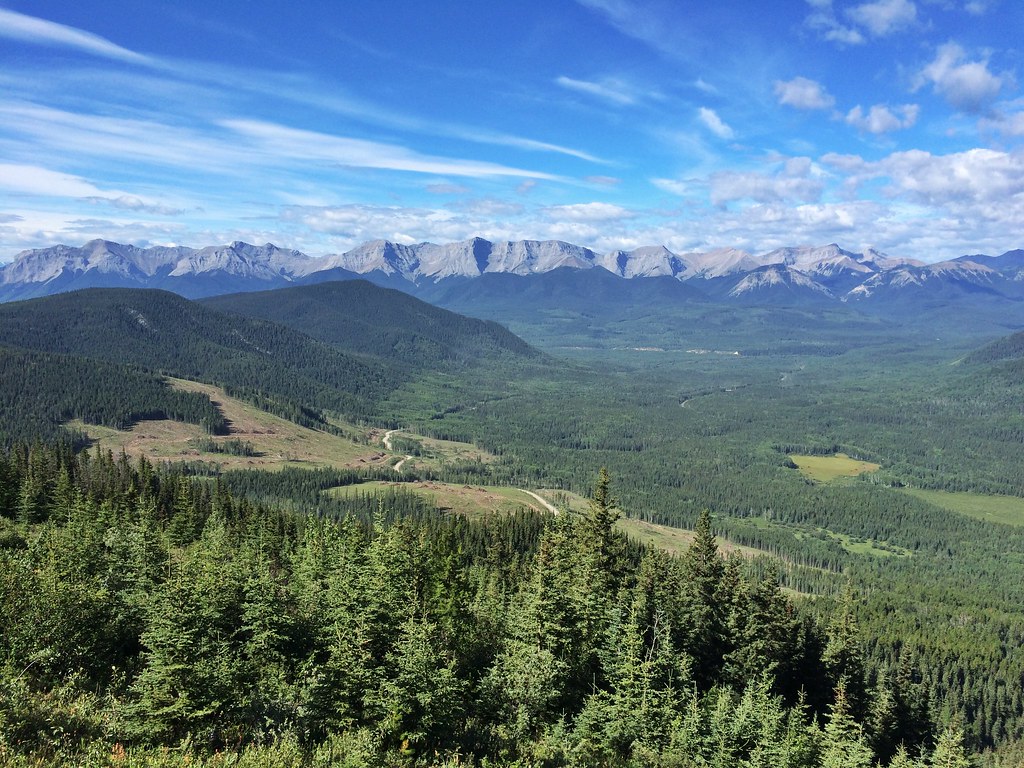 A random afternoon detour took us to the tiny village of Brule, it headed right for the mountains towards the border of the national park and was a stunning drive. The villages slogan was ‘our hidden paradise’ which was very applicable with the scenery that surrounded them. 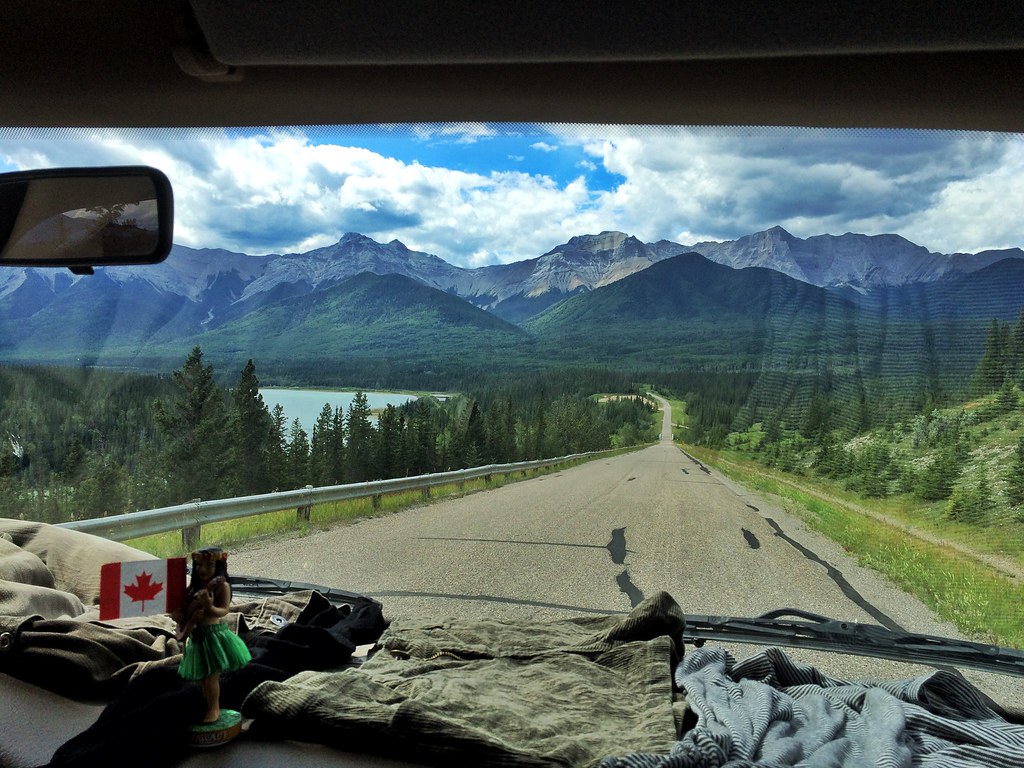