We’re in a mountain sandwich but the filling is shit. We left the stunning northern Rockies and have been driving for quite a few days through nothing but forest. Occasionally the scenery changed to burnt forests where wildfires had charred the surroundings leaving nothing but black tree trunks and a ground covered in bright pink Fireweed, a wildflower which is the first thing to spring to life after a fire. Don’t get me wrong, I love the wilderness and that’s all we were driving through but I can’t help but miss the mountains and wildlife. 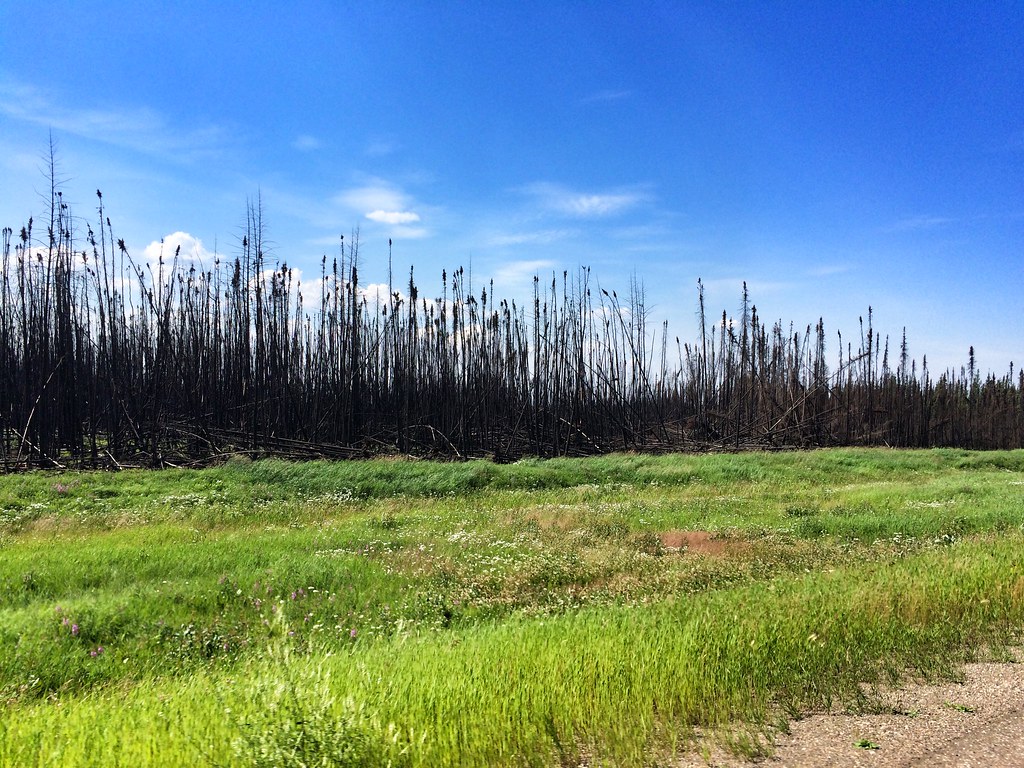 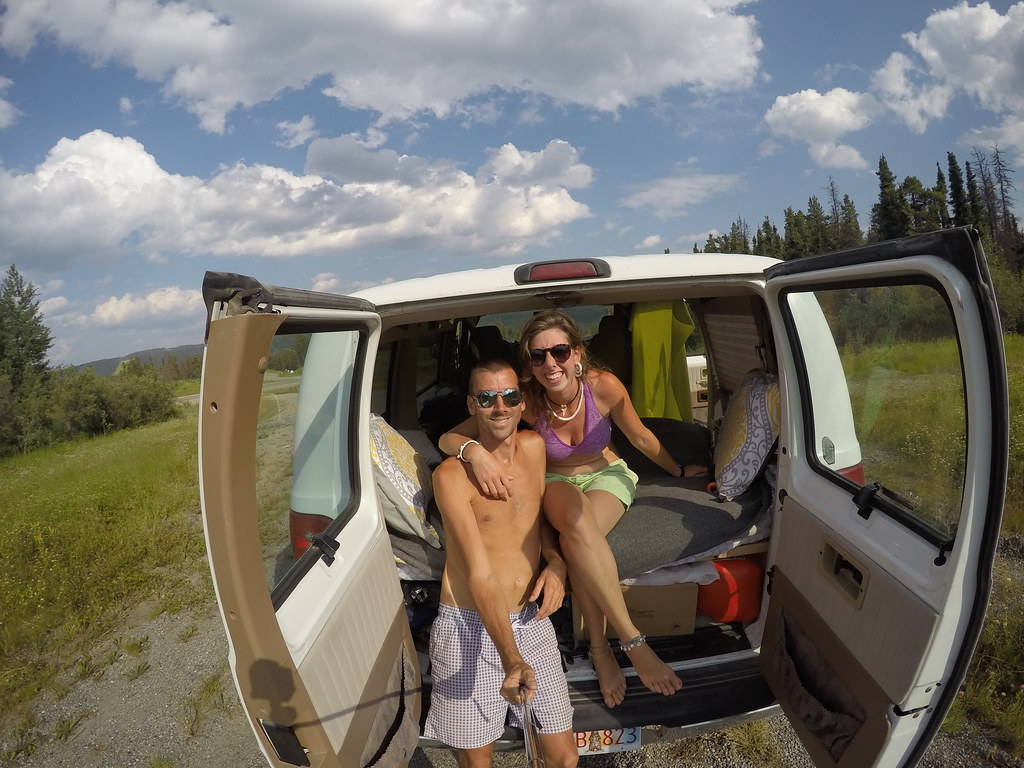 We stopped for the night at Fort St John and stayed in the Walmart. While Craig was cooking dinner I was gawping at the sky which was becoming increasingly grey and heading our way. The clouds blackened and moved closer to us bringing with them strong winds that caused dust to spin and dance along the car park and then sprinkle onto Daphne’s metal. The rain began falling and soon enough we were in the eye of the storm with lightning strikes and loud roars of thunder. We kept saying to each other that we’d never experienced such heavy rain but somehow it kept getting heavier and heavier till it was like a river falling out the sky. I think Mother Nature just purchased a new state of the art shower head and it had a malfunction. It was insane! Craig managed to serve up dinner and just as we were about to eat he noticed the back window was leaking. In fact four windows were leaking and there was nothing we could do about it except place breakfast bowls under the windows to catch the water. We quickly gobbled up our dinner and Craig decided to drive to another area of the car park so the rear windows weren’t getting the full brunt of the rain. That was when we realised that we were pretty much surrounded by water. The car park was seriously flooding but thankfully we managed to go around the edge where the pavement was higher and only half of Daphne was in the puddle. We parked at the top of the car park and felt a lot safer as the rain became lighter and the leaking stopped.

We happened to be parked in a prime position to watch locals in 4×4’s plow through the foot-deep water, kids would be sat in the back watching their DVD sets while dad created 2 meter high waves around the car. Much to our amazement normal cars tried to go through the water, including a swanky looking Mercedes and we winced as they drove through and the water became deeper and deeper around them, why oh why would you risk driving through that? It was quite good entertainment though after the worry of the storm. The highlight however was a teenager who walked out of Walmart and discovered he was trapped on an island. He began waving his arms in the air in frustration, dipping his shoe into the puddle and then putting his hands on his head in despair. We thought he must have a low riding car that wouldn’t make it through the water, but no, he was actually without a car and walked off to get a trolley. Craig and I were watching in bemusement as he began pushing off with his right foot as he ‘rode’ the trolley through the puddle. We were laughing like mad now; he was getting his shoe soaked for starters so his plan was totally pointless, but then his trolley crashed down into a hidden drain (which clearly wasn’t doing its job) and we roared with laughter. He had to abandon ship and run through the last section! Poor kid. 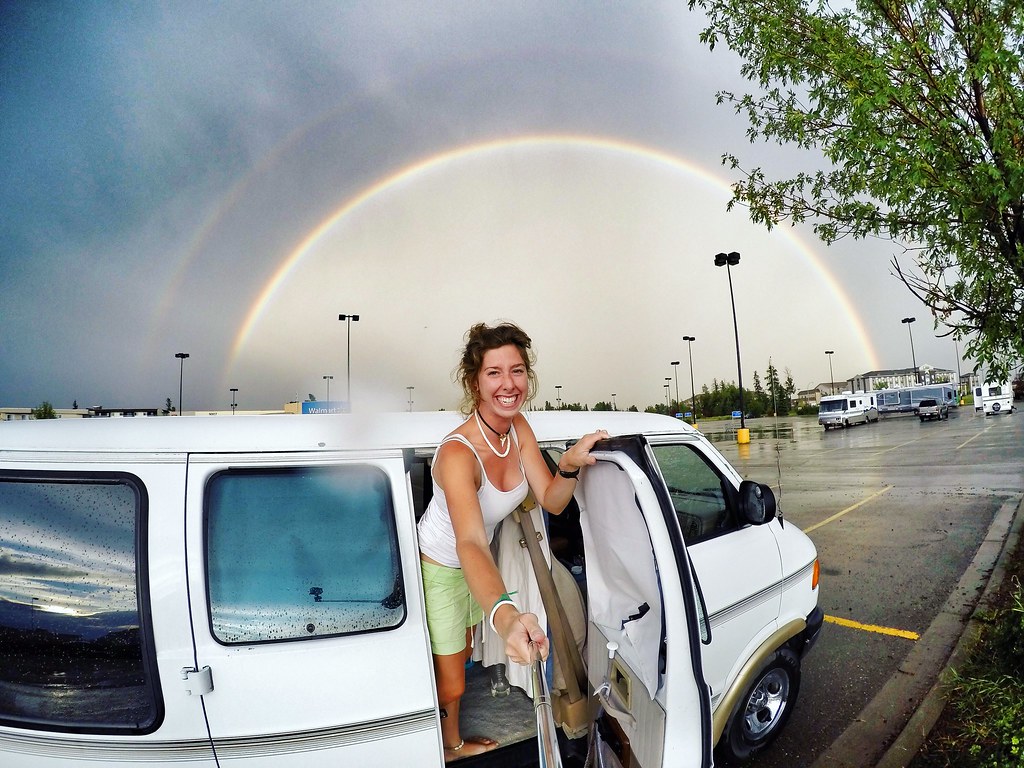 The next day we arrive at Dawson Creek, the end of the Alaska Highway for us, and the start for a lot of people. We’ve driven 4500 miles now and there’s plenty more to go till we reach Florida. The visitor centre was strategically placed at a big ‘Alaska Highway’ sign; an image we’ve seen over and over in brochures but finally we made it! There was also a large restored grain elevator converted into an art gallery, which was a beautiful structure. 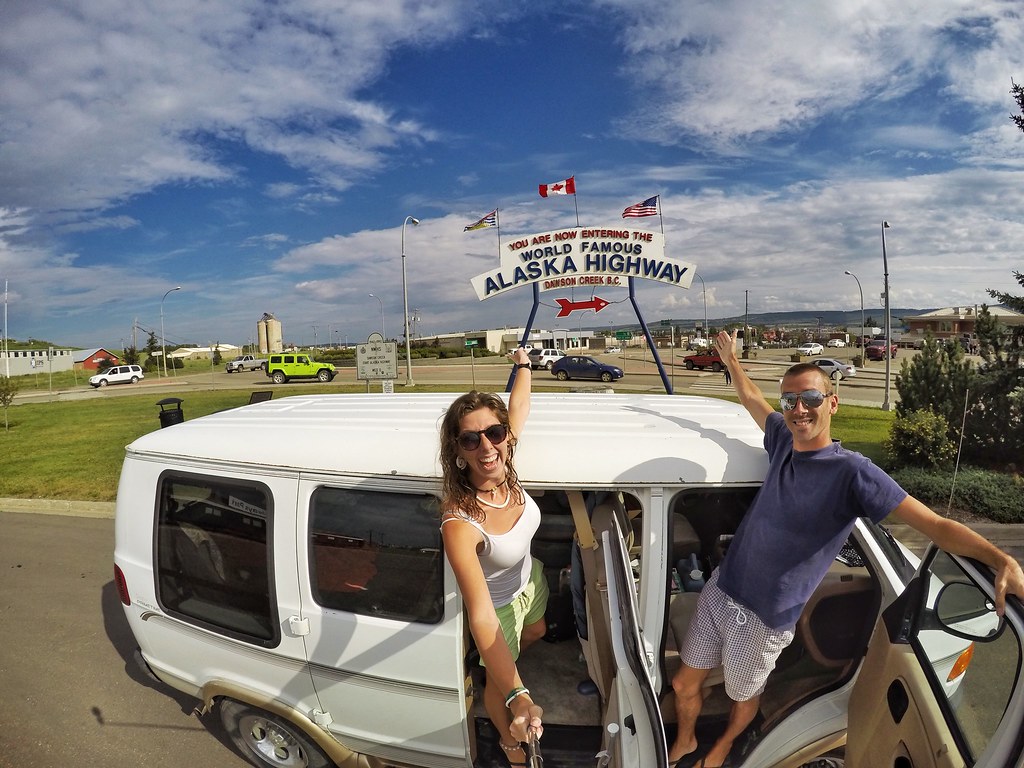 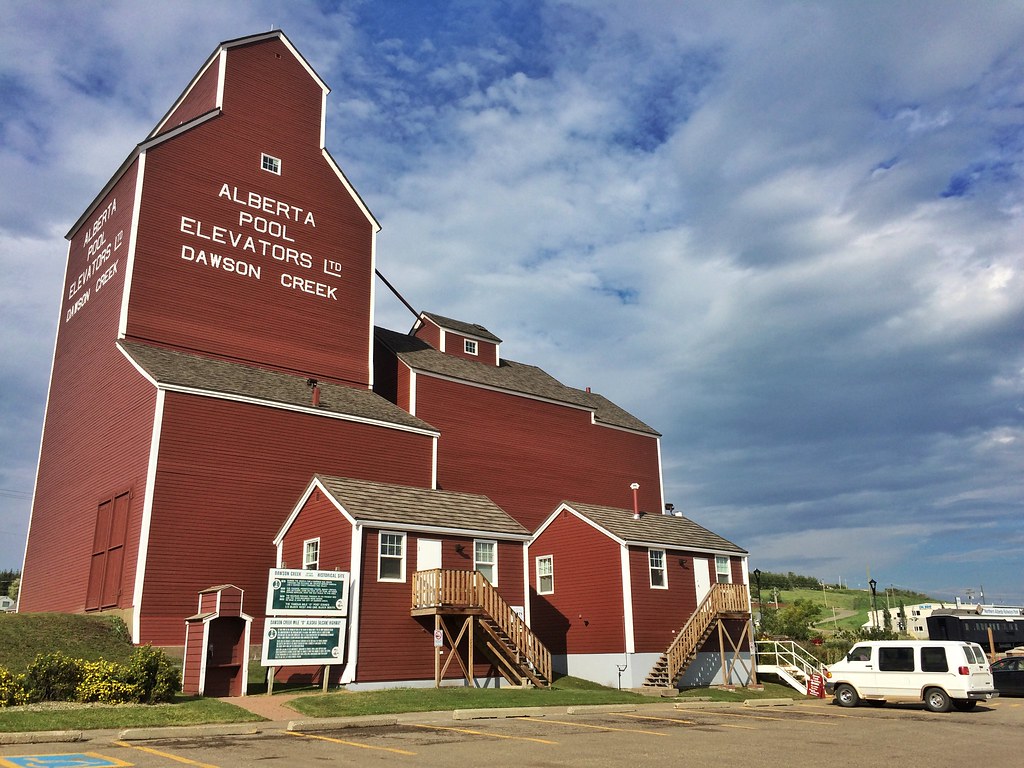 To reach the bottom slice of the mountain sandwich we had to pick a route, east or west. Not many people we spoke to had driven the western route but a few had done the east and said it was a lovely drive, so the decision was made. We crossed the border into Alberta and took a detour through farmer country. We haven’t seen any agriculture since Palmer in Alaska and it was quite a shock to the system after never ending forests and sky high mountains. We thoroughly enjoyed the new scenery though and it was a pleasant change with bright yellow canola fields surrounding us. Traditional red barns dotted the countryside and cows munched on grass while we blasted out the delightful folk music on the radio. 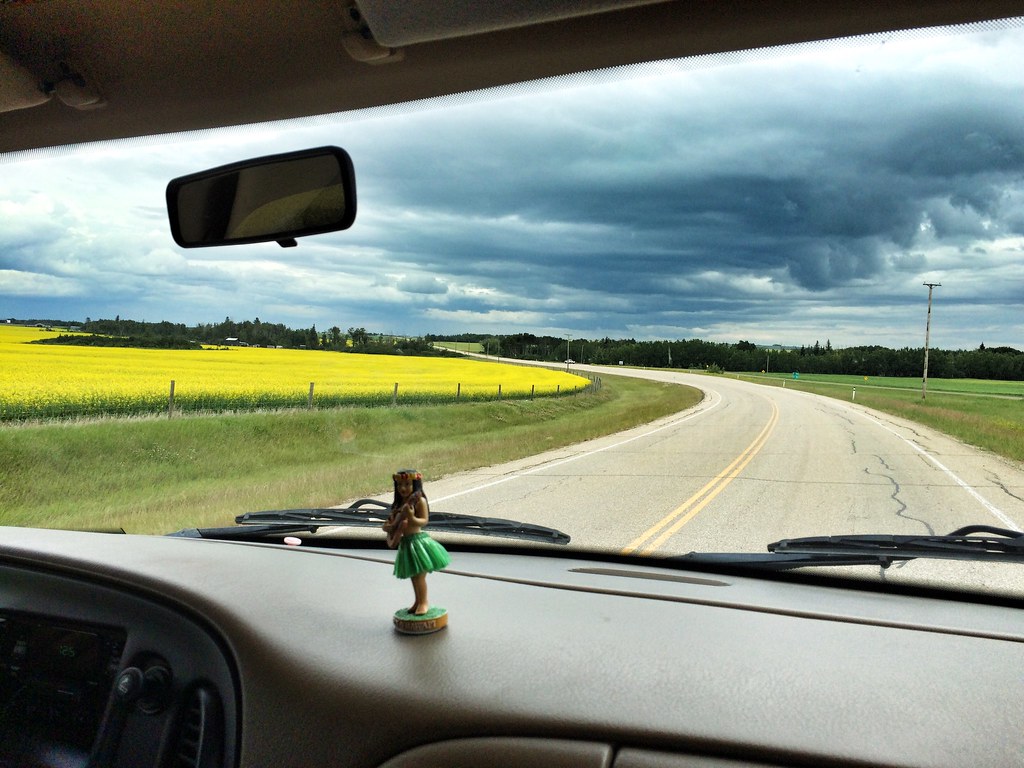 I was looking forward to visiting the village of Sexsmith as it looked like a sweet, restored old town but was rather anti-climatic and on further studying of the photo in our brochure I noticed it had been photoshopped! We felt scammed! The main feature of the village was the turquoise grain building (the culprit of the Photoshopping) and a few flat fronted shops along the main street but nothing that wowed us. A new storm had been following us all day and it began raining so we stopped the detour there and just headed straight for Grand Prairie to stock up on supplies for the Rocky Mountains.