Call it fate or whatever you like, but yesterday if we hadn’t turned around to check out the log that looked like a dead bear we wouldn’t of had the crazy close encounter with the bear family from the ‘relative’ safety of our van. Today it happened again. We were looking for a hike but saw a mile marker which was past our trail head so we reluctantly turned back down the super steep hill and took the only dirt road it could possibly be. We pulled up at the top before it became 4 wheel drive only and wandered down the road. Clearly there wasn’t a hike starting around there, it just led down to a clear blue river so we headed back and picked a couple strawberries on the way up. Just as we drove out we realised the hillside to the left was covered in strawberries so we stopped in our tracks and grabbed a bowl each. We read that each teeny tiny wild strawberry has as many vitamins as one orange. Within fifteen minutes our combined pickings was one very generous bowl. Craig was taking a photo of me proudly holding the fresh, organic produce when he said “whoa, there’s a bison!!” How the heck didn’t we hear a 2000lb giant creeping up on us? He was casually walking along the verge where we’d just been picking. It was hilarious! Mr Bison walked right past Daphne and headed out onto the grass verge of the highway. 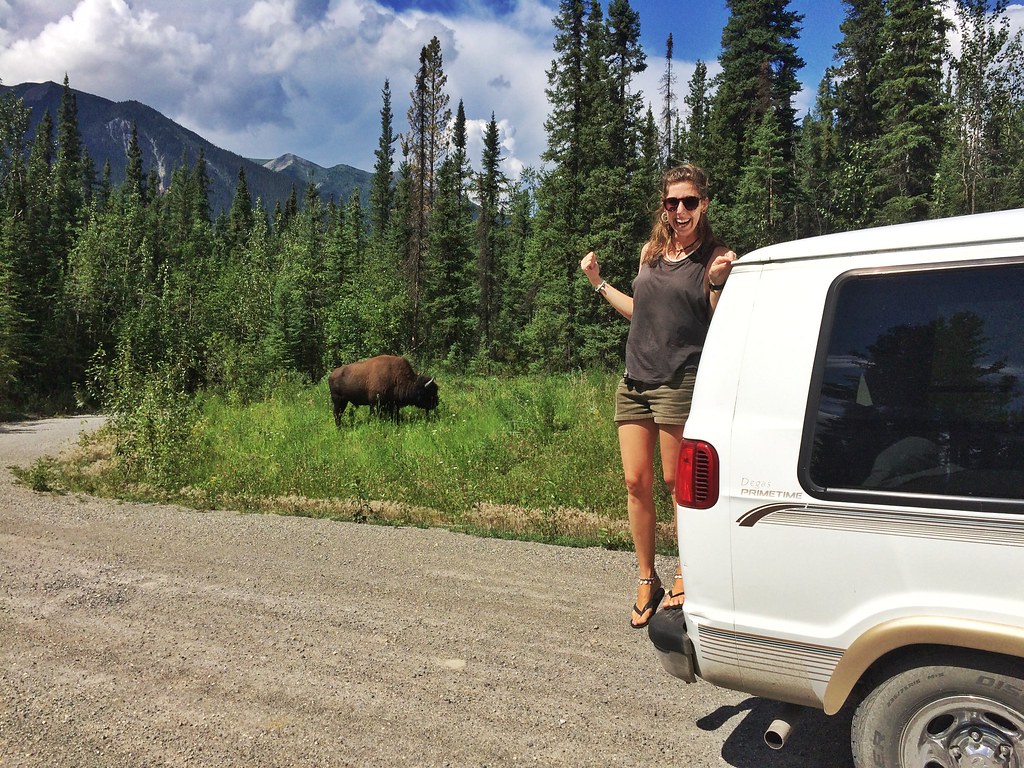 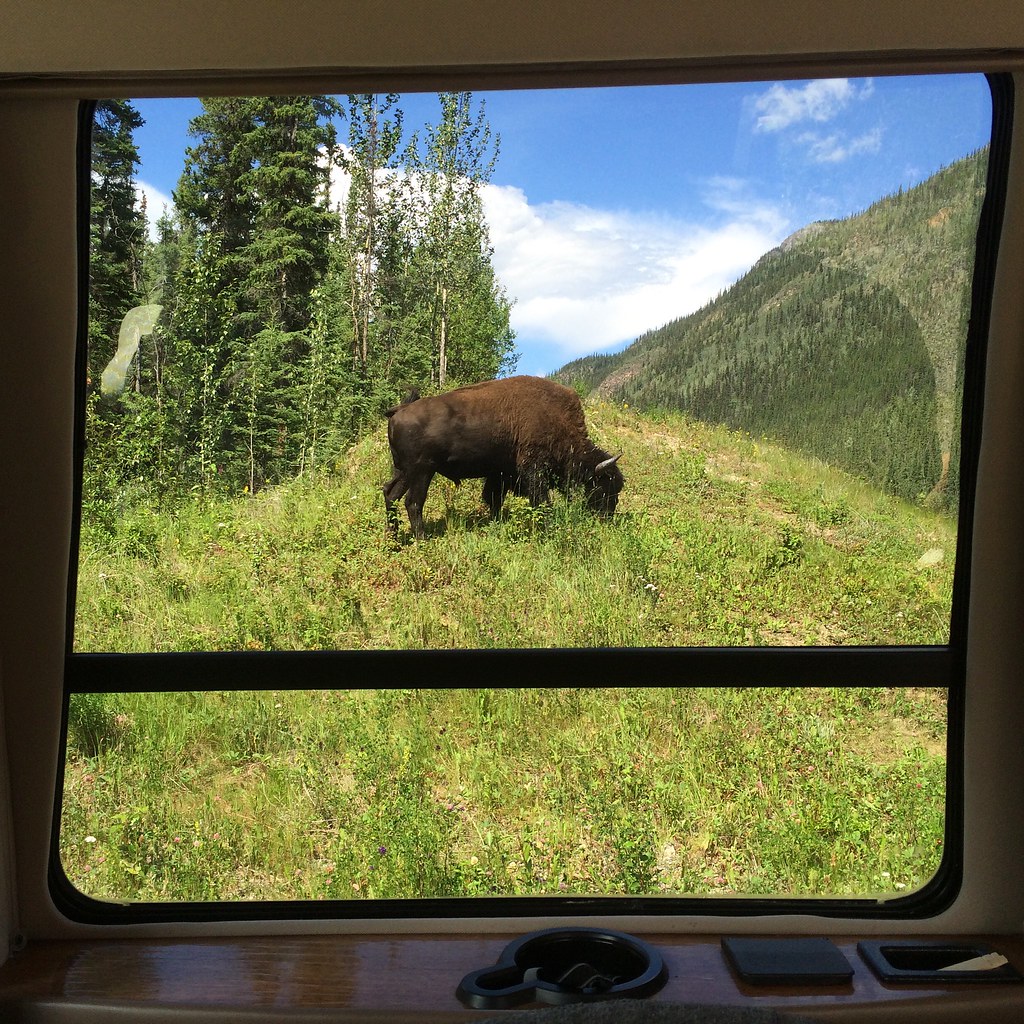 As we drove up the road we went right past 5 stone sheep which were the first ones of this trip, and a couple kilometres past what my brochure suggested was the trail we were looking for. So that pointless detour actually gave us a ton of strawberries, a very cool bison encounter and some elegant looking sheep. We’ve come to realise that we don’t find wildlife, it finds us. No matter how much we scan the area we won’t see a thing, but when we least expect it they pop up. 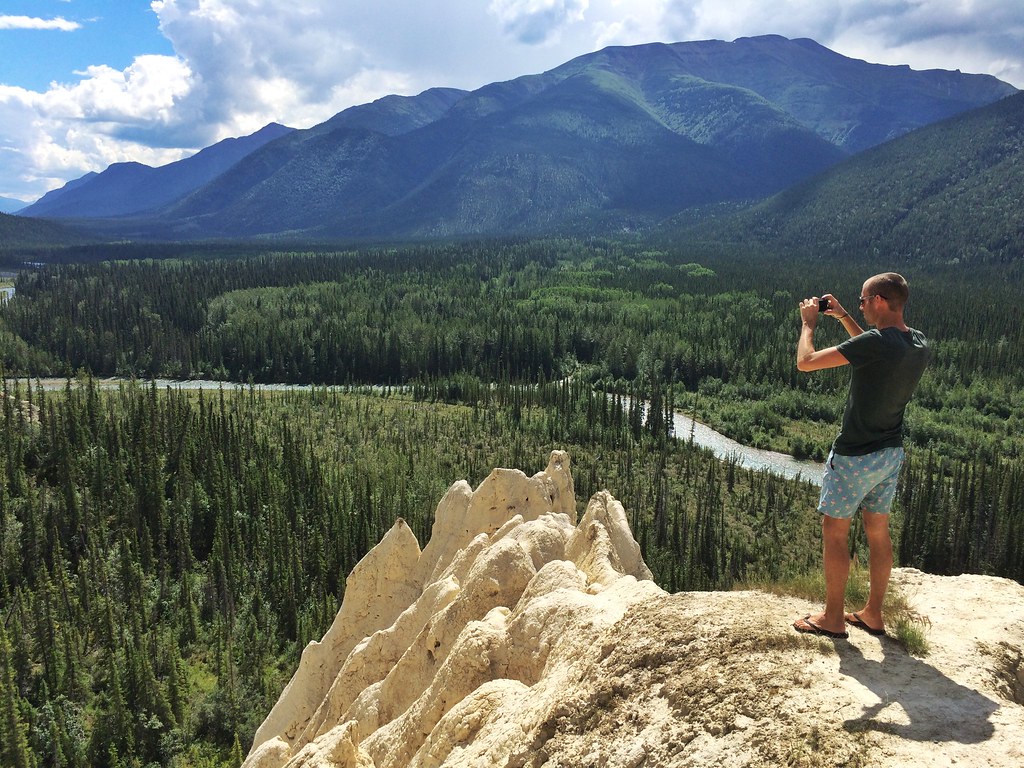 We spent the rest of the day relaxing at the Liard hot springs, a highlight for anyone driving the Alcan. A 700 meter Boardwalk led us to the natural pool with clear, blue water, a gravel floor, mud banks and forest all around. The only unnatural part was a large wooden seating area but I sure enjoyed sitting on it when it became too hot. There was a lower pool which was cooler with murky water, it’s funny how I would never get into water like that but with other people there it made me feel comfortable. The pool led off down a narrow path with fallen trees and looked very creepy but we braved a swim and enjoyed the change in temperature where tiny cold streams joined the warm waters. It became too narrow to swim any further so we stood up in the 30cm deep water and walked back. We spent most of our time in the hot, clear pool though which was very sulphurous and fart smelling but wonderfully relaxing. 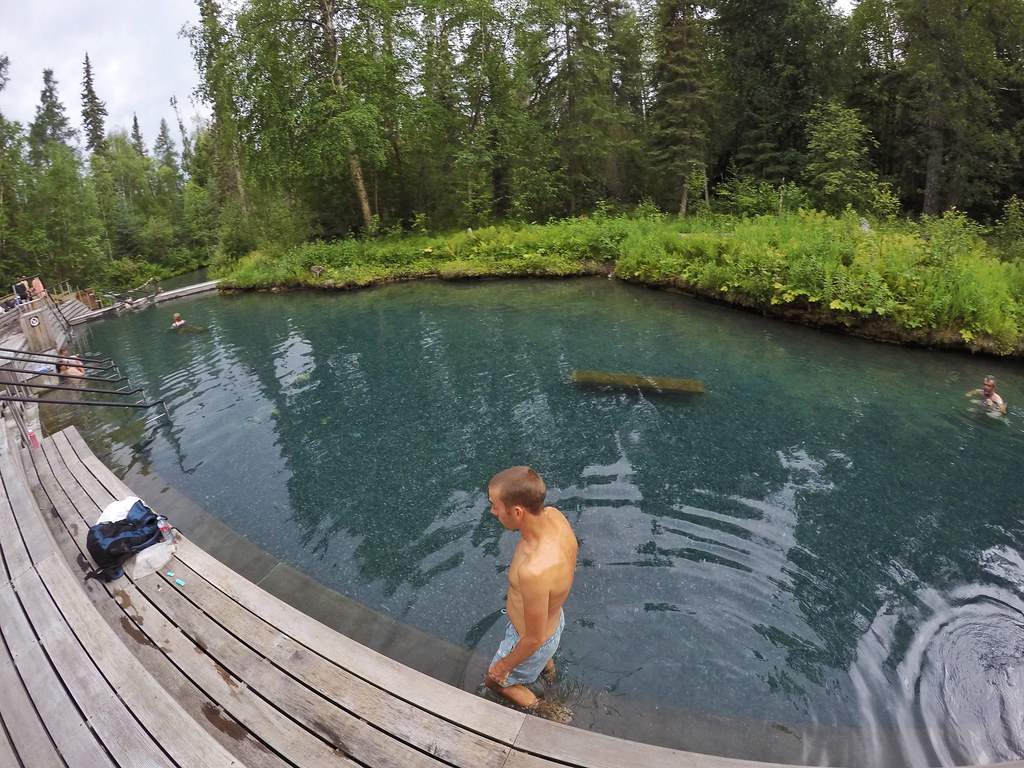 I asked a local where we might see the big herds of Bison as we’d only seen a few here and there and she said last week there was a big wind that took down lots of trees and the bison just vanished. She thinks they moved deeper into the woods which was a shame as I was expecting to see huge numbers of them along the roads. Thank god we’ve seen lots of bears along the way instead, but it also makes us appreciate each wildlife encounter when their not everywhere. 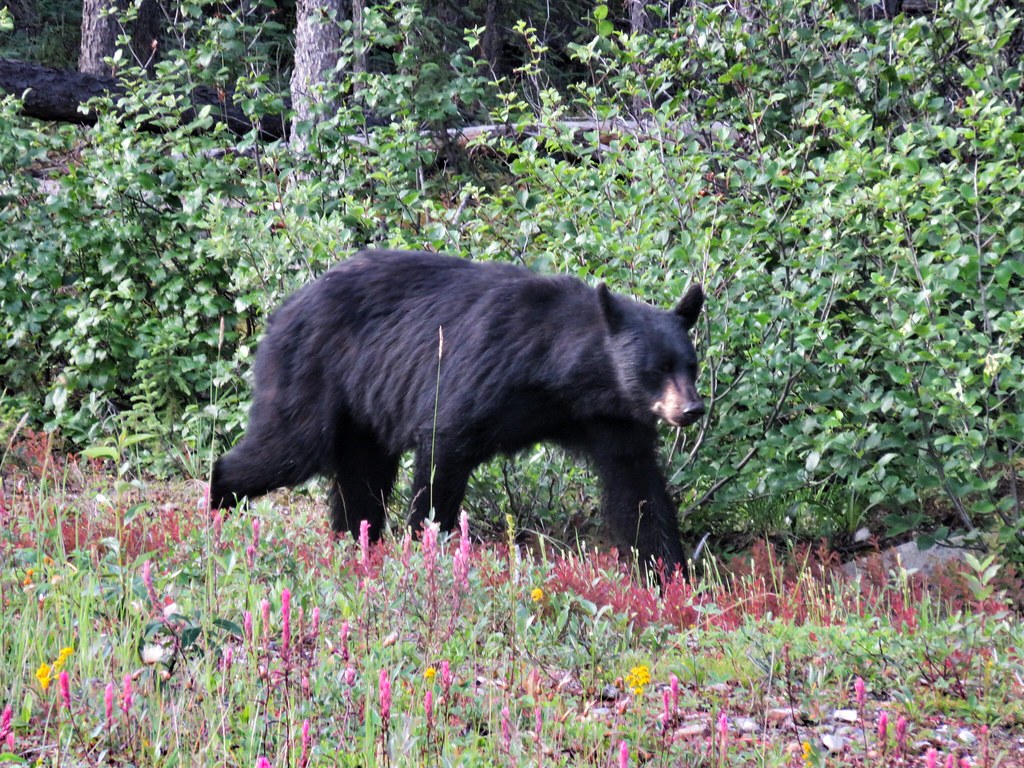 Over the next day we headed to Muncho Lake Provincial Park ready to do some hiking. We parked up for the Boulder canyon hike and after a whole morning of sunshine a big black cloud rolled over and dropped a ton of rain. Luckily it stopped after a cup of tea but I didn’t want to do the canyon hike anymore. It sounded goddam stupid to hike up a canyon in stormy weather, it just seemed like rule number one of canyon hiking. But Craig was adamant that he was doing the hike so off we went with an enthusiastic Craig and an angry Lauren. The sun actually came back out and the creek leading out of the canyon was still dry so clearly no flash floods happened from that downpour. Maybe I’ve watched too many movies, or maybe those scenarios only happen in the deserts. The terrain was what you’d expect of a hike named ‘Boulder canyon’; boulders, rocks and scoria, it meant we were constantly looking down to check our footing. It was a proper canyon though and totally not what we expected of the area. It narrowed to just one meter and crystal clear water trickled through the gap. We had to go up and around the top of this section of the canyon and then rejoin the creek further along. It continued like that for a while, up and over a waterfall and back along the creek. A big grey cloud started forming over the rocky grey mountain at the end of the canyon. Then the thunder began roaring, it was all amplified from the canyon walls and every time I looked up the grey cloud darkened until it was like charcoal. Craig was happily plodding along while I was getting more and more nervous. The thunder clapped and banged again and then I flipped “WE’RE GOING BACK NOW!!” I think Craig became a little nervous too at the unknown so we headed back and the storm chased us out the canyon. Big dollops of rain began falling and hitting us heavily like birds pooping on us. We just managed to get back to Daphne before it began nailing it. After the storm passed another one began and slowly crept towards us until it was right above us at which point it decided to stick around and rain all night. 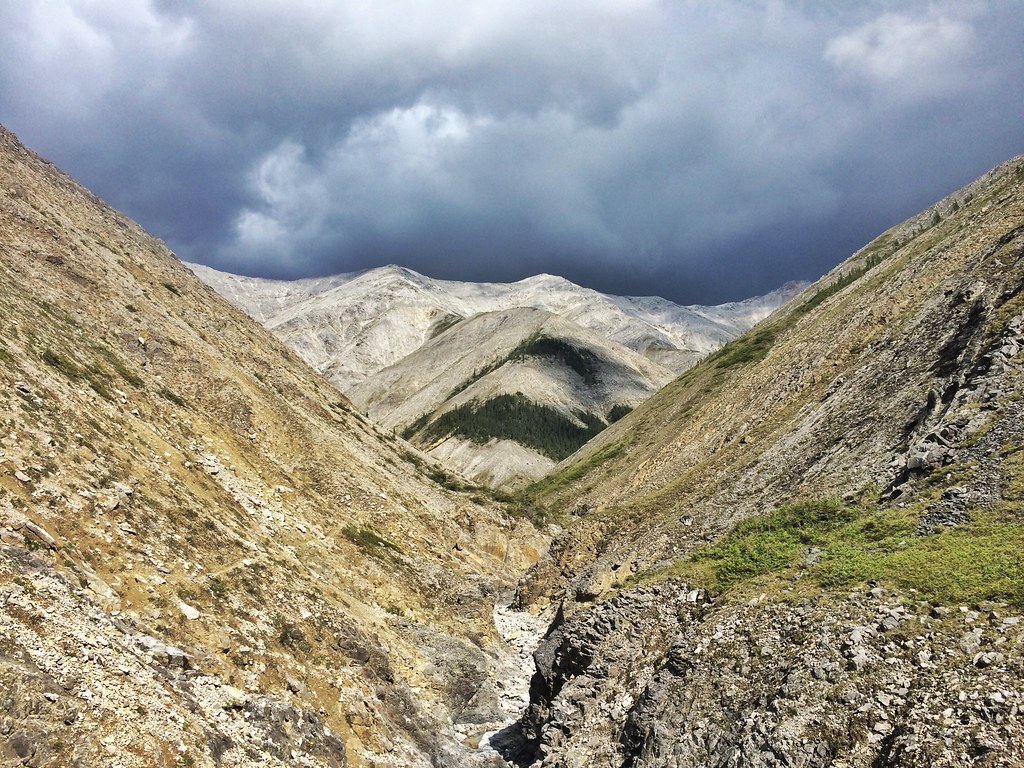 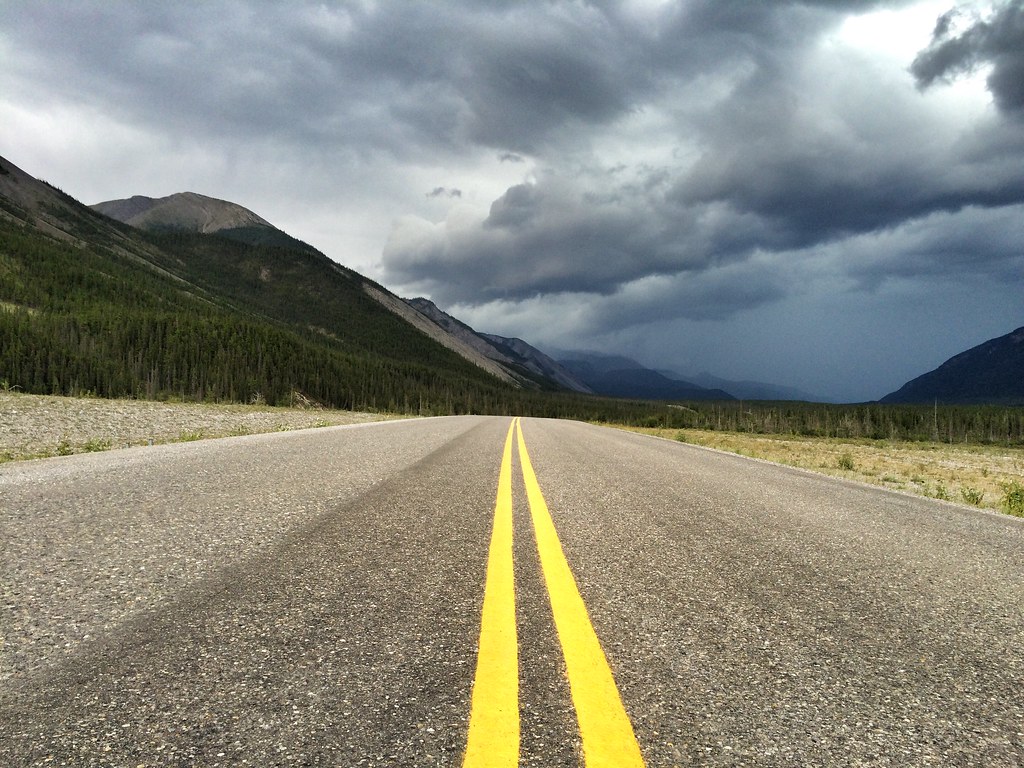 The next day the rain eventually stopped and we picked a non-canyon hike to do which ended up being a canyon, typical! We had to cross a creek about a dozen times and it was only on the final jump that my boot went right into the water. The valley split into two so we picked the left branch which looked like flat gravel terrain but it was anything but flat with a gradual incline up wobbly boulders. We climbed up and the valley continued to narrow, the rocky walls turned into orange hoodoo spires and it looked more like Utah than the northern Rockies. 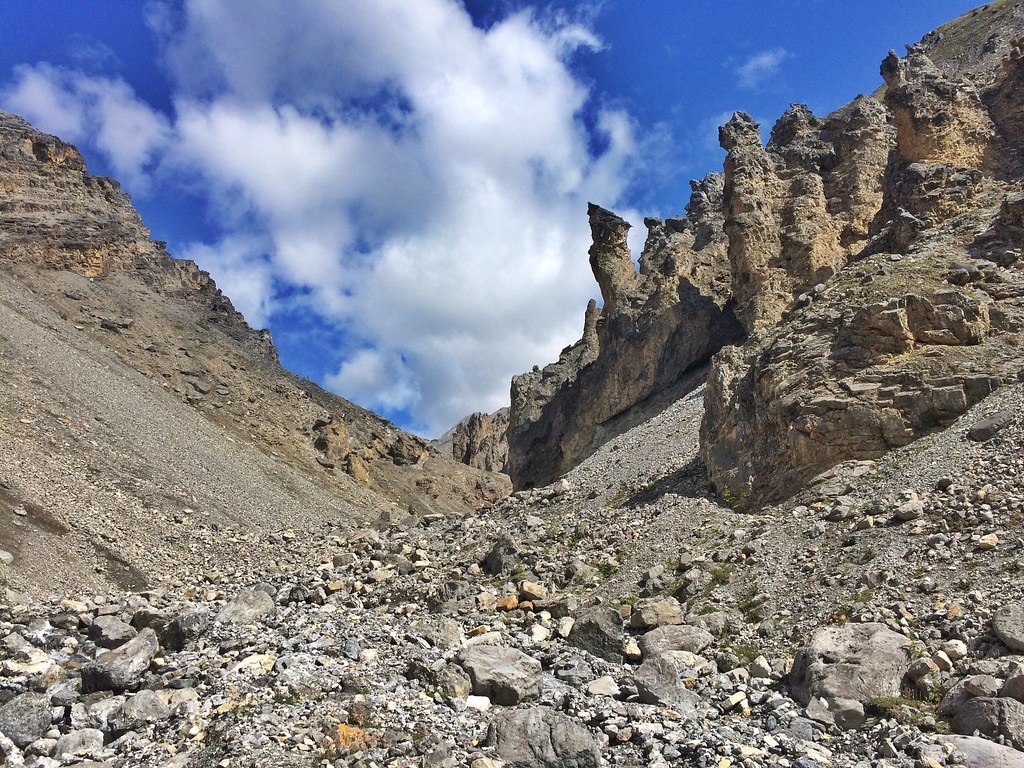 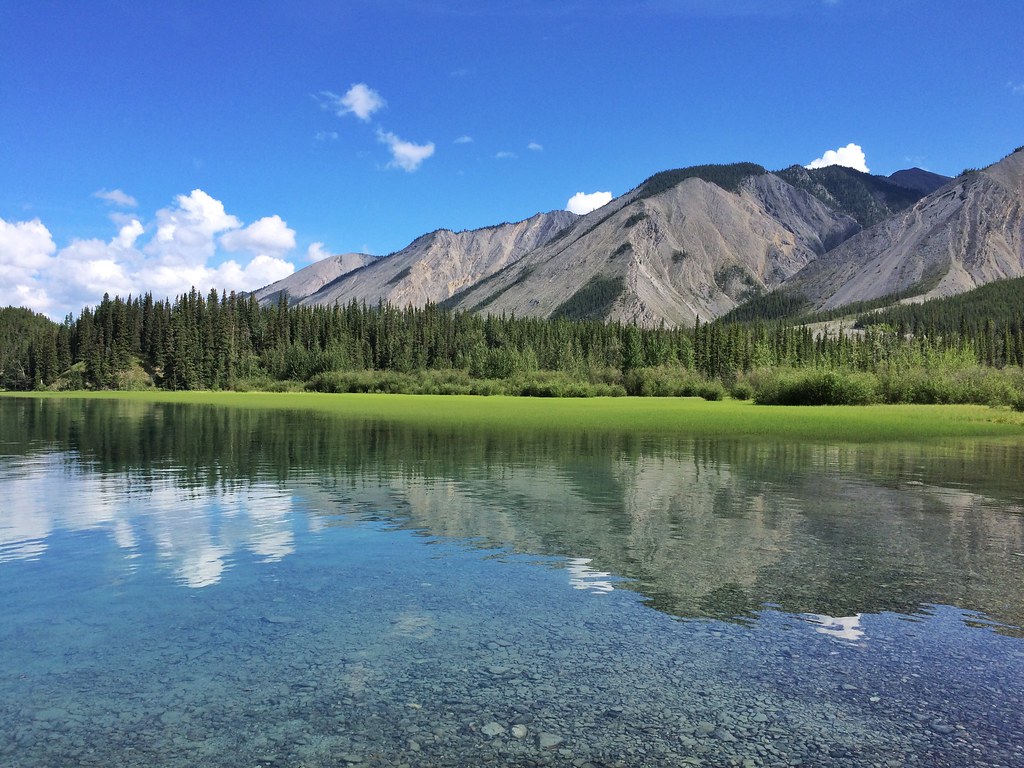 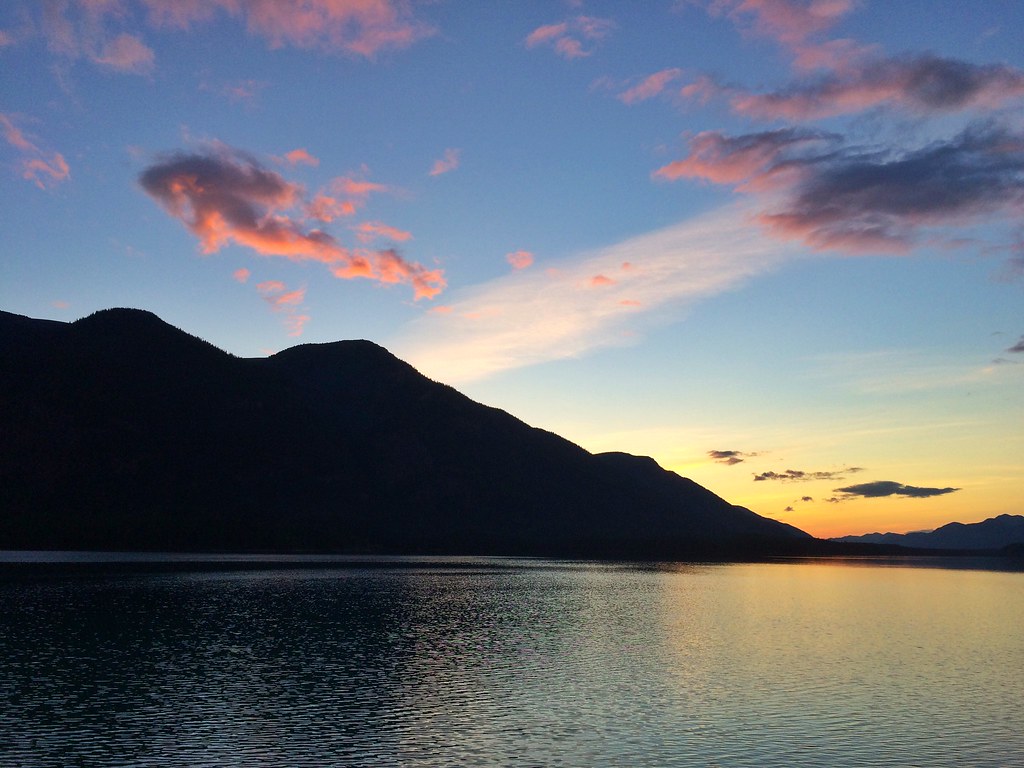 The sun was out for the whole hike and we were ready for a swim in the gorgeous Muncho Lake. The view was amazing as we came down the valley, the lake was bright blue but gradually started darkening to navy and we looked up to see a big storm cloud taking over the sky. Oh for goodness sake!! Not again! Luckily a good old tea was enough to pass the storm and we enjoyed a well needed dip in the cool waters followed by dinner beside the lake with incredible Rocky Mountain views. 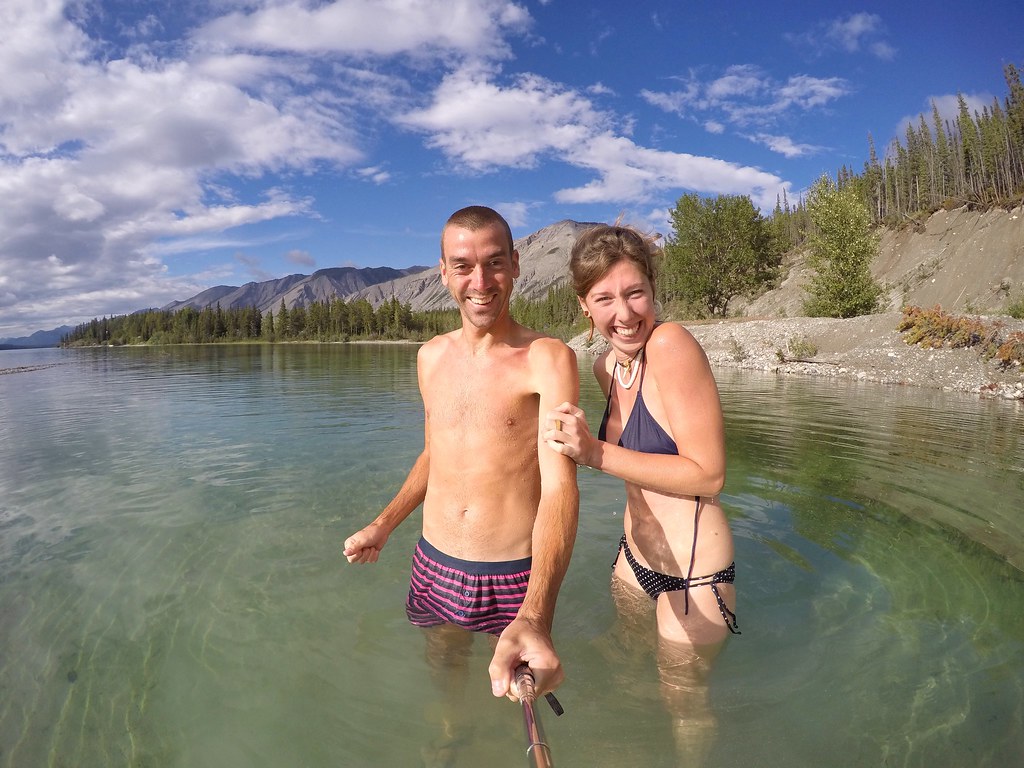 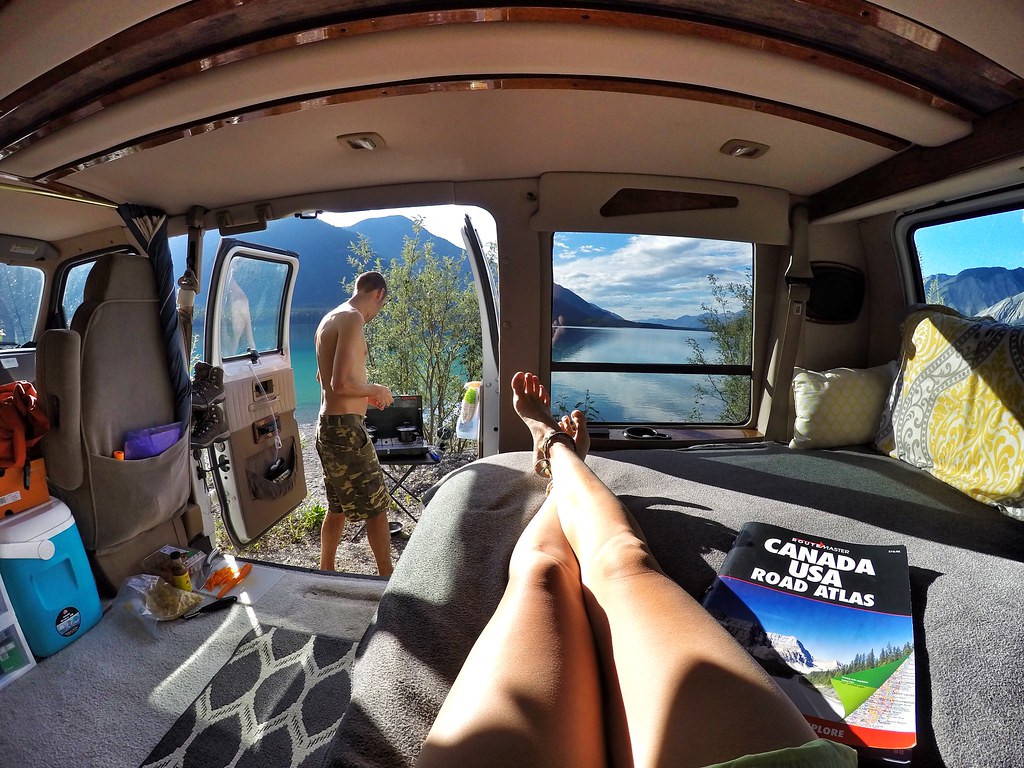 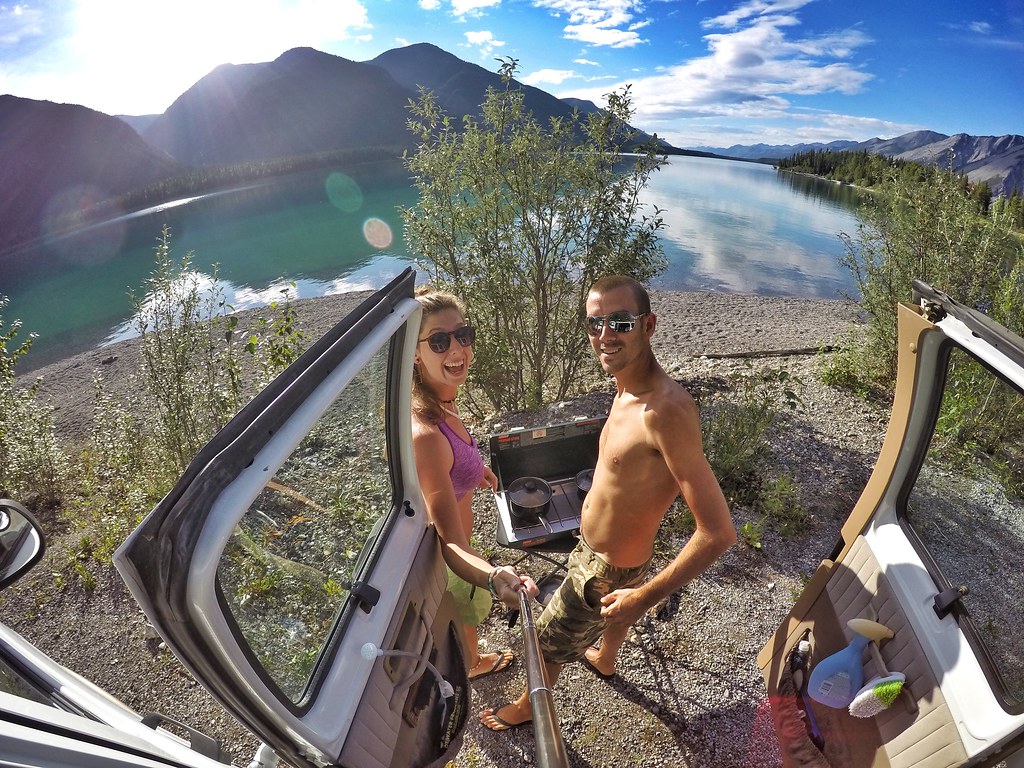 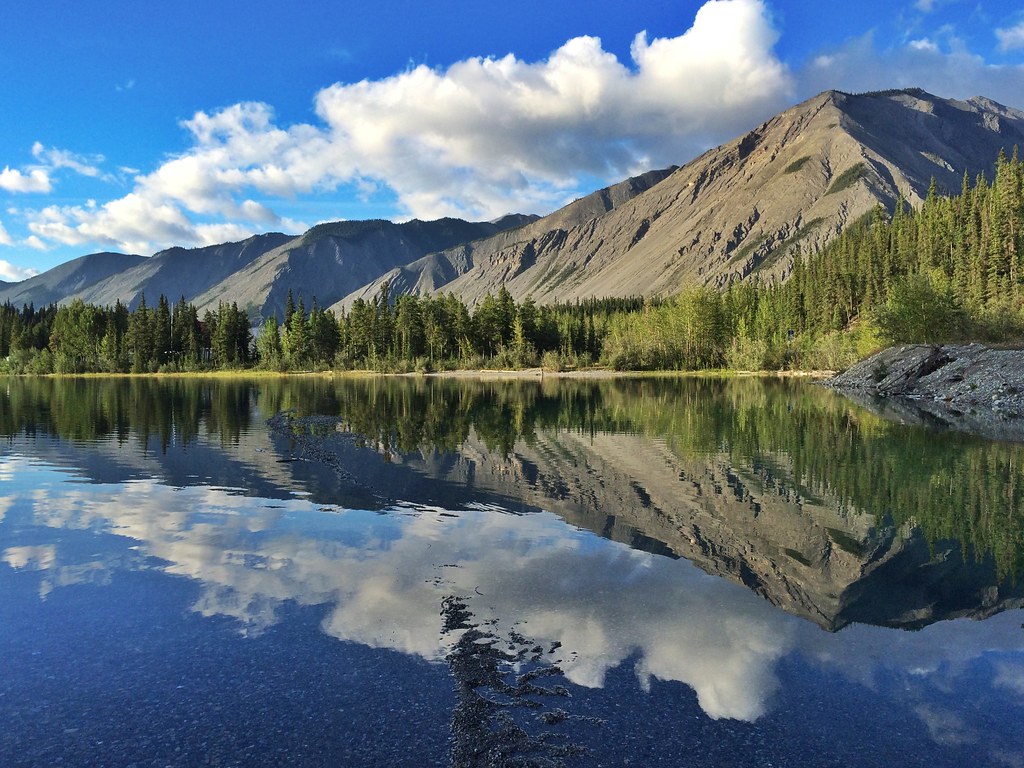 I said no more canyon hikes for a few days so we did a ‘normal’ hike along the Old Alaskan Highway trail, we actually detoured right off it to head steeply up a ridge line. I love hikes where you gain elevation quickly, the views are always worth the sweat. This time we had a stunning view of the vivid blue Muncho Lake. It stretched over 12km below us and was quite the sight. Just 45 minutes to reach such an awesome spot and no one else around. It’s peak season now for North America but this area just isn’t busy, the Alcan seems to be popular for fly-by visitors but we’ve been the only people hiking the trails and the only vehicle parked at the trail heads, it’s very bizarre. We were stinking hot after the hike and ready to bathe in Muncho’s icy waters. We found the perfect location where we opened Daphne’s doors onto a gravel beach with our own access to the clear waters. Ah van life can be so good! 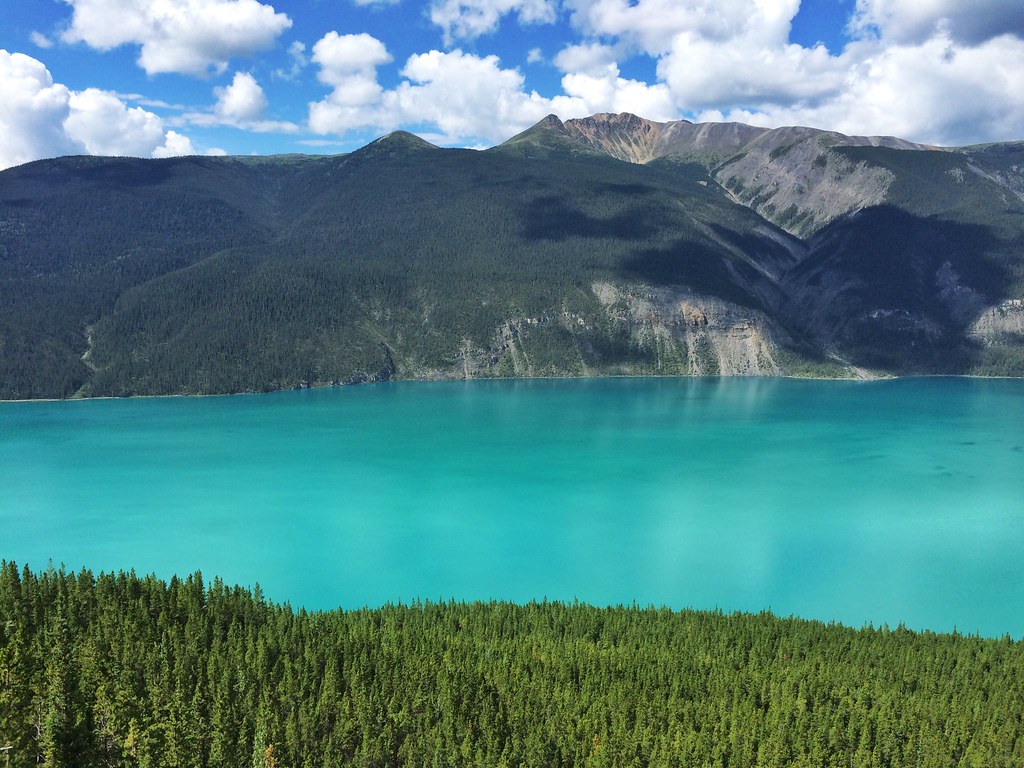 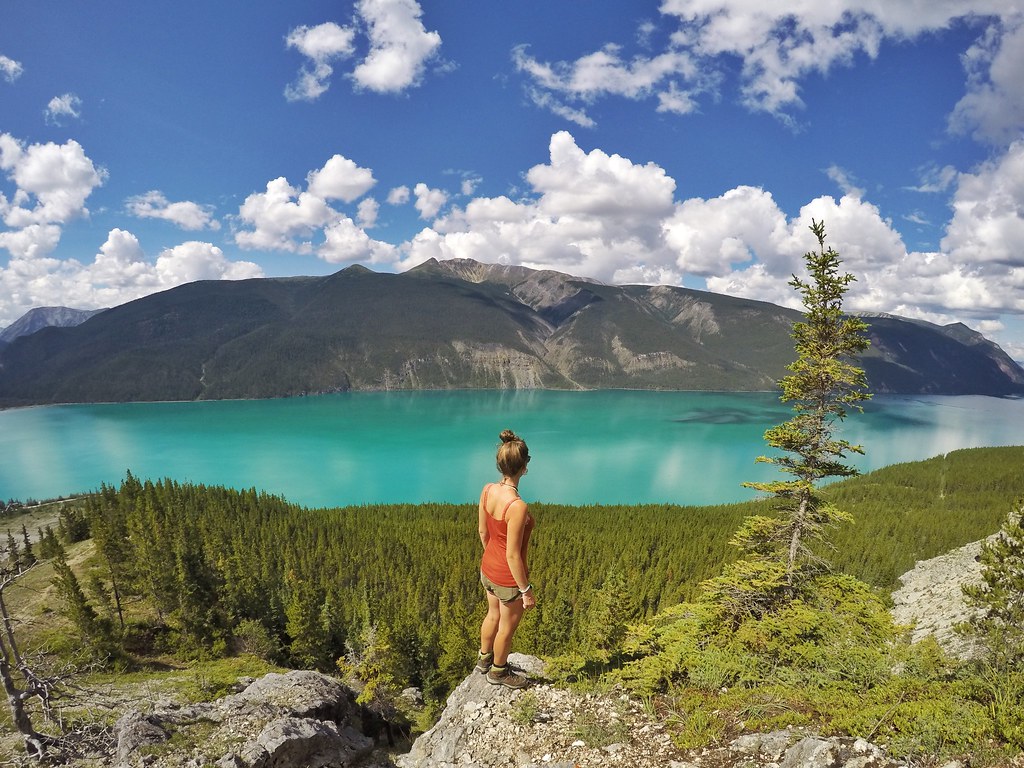 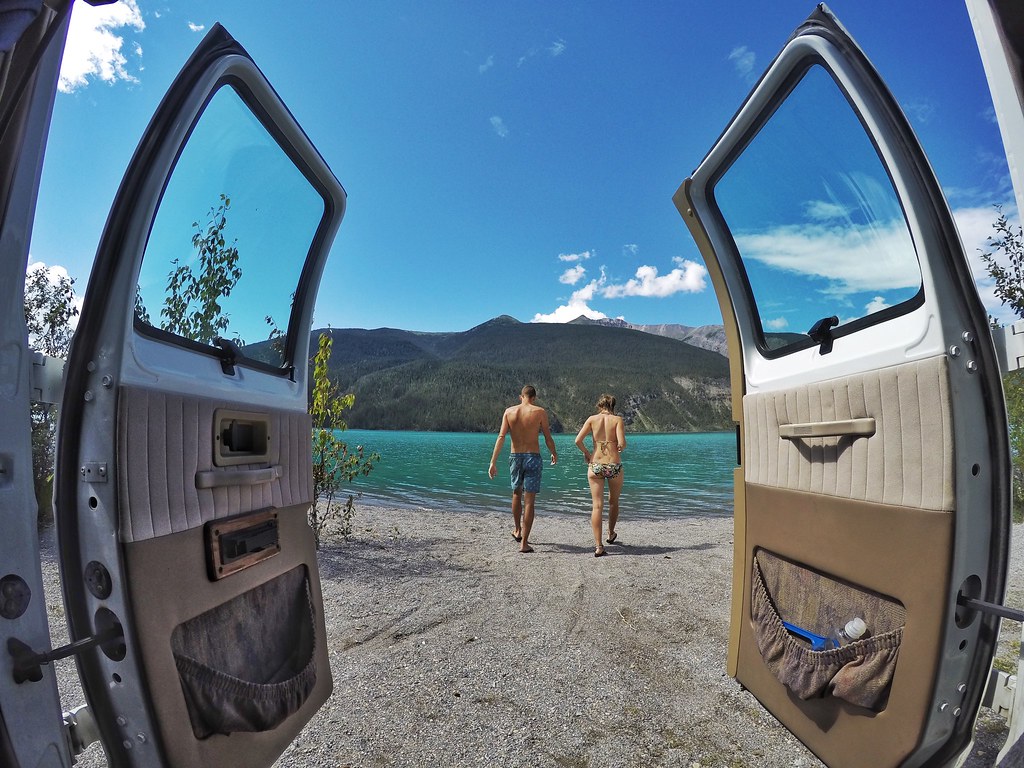