Finally we arrived in Bison country! The Alcan highway between Coal River and Muncho Lake is home to a herd of wild bison who are a threatened species in Canada. They are regularly seen along the highway and our friends visited a month ago and joked that it was like a safari drive as they were surrounded by the beasts. Yellow warning signs were along the road and we really wanted to camp in a place where bison might roam. We spotted our first Lone Ranger up a steep grassy verge besides the road. Boy was he big! He was shedding his winter coat so his front half was covered in thick fur while his back side was more like the derrière of a water buffalo. 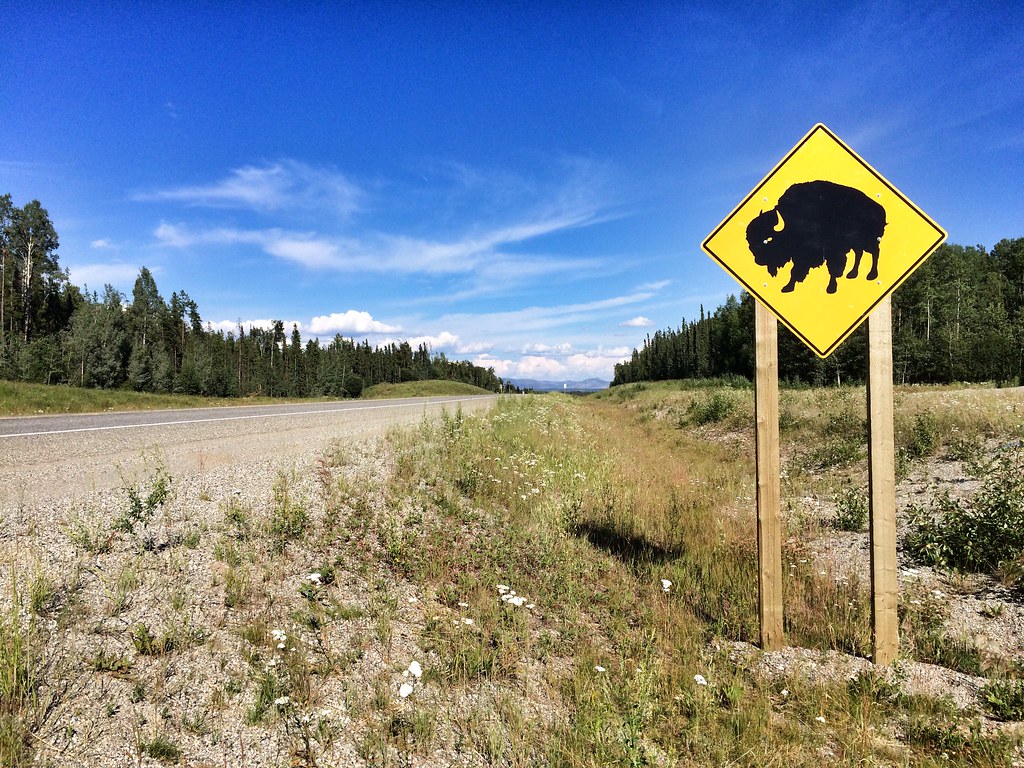 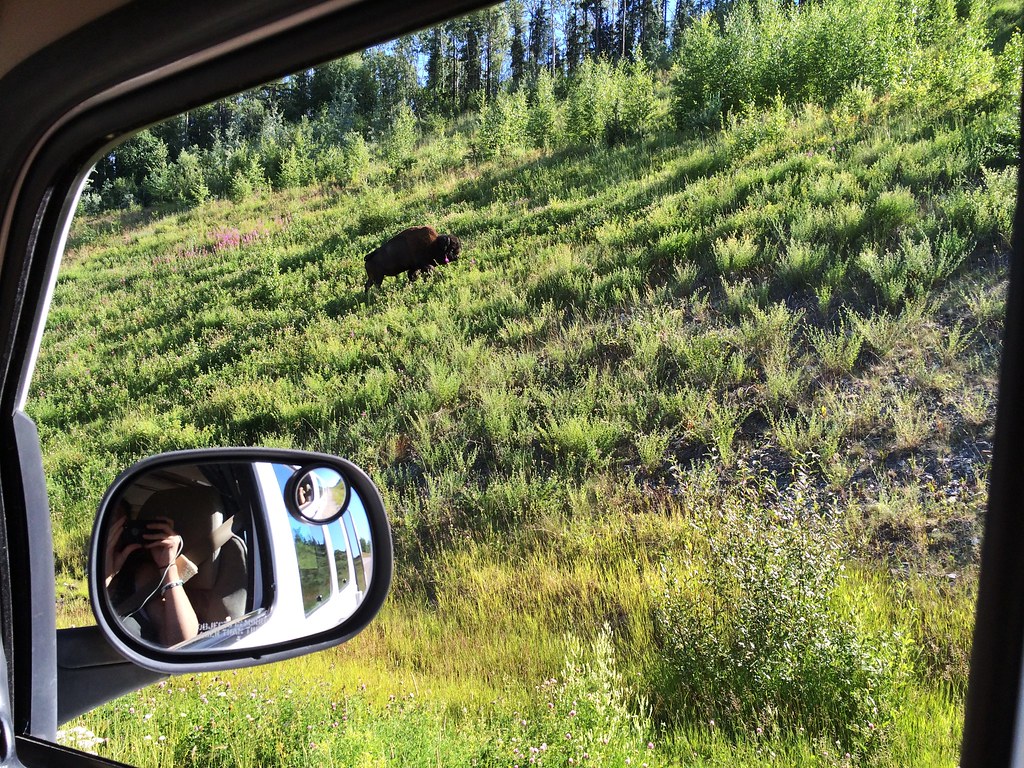 All we were expecting to see along this section of the highway was bison but Craig spotted a bear!! It was brown and black so we had no idea what type of bear it was but judging by its small size and pointy ears we think it was a black bear. It was happily grazing on the verge eating it’s fair share of berries. We drove along a little and pulled up on the shoulder with our hazards on. He was so content eating berries that he kept waddling our way until he was about 1 meter away from us! We couldn’t believe it! Every time a car went past he’d look up, left and right and then continue picking. Eventually he crossed the road right in front of us. Well, we certainly won’t get a closer encounter than that. 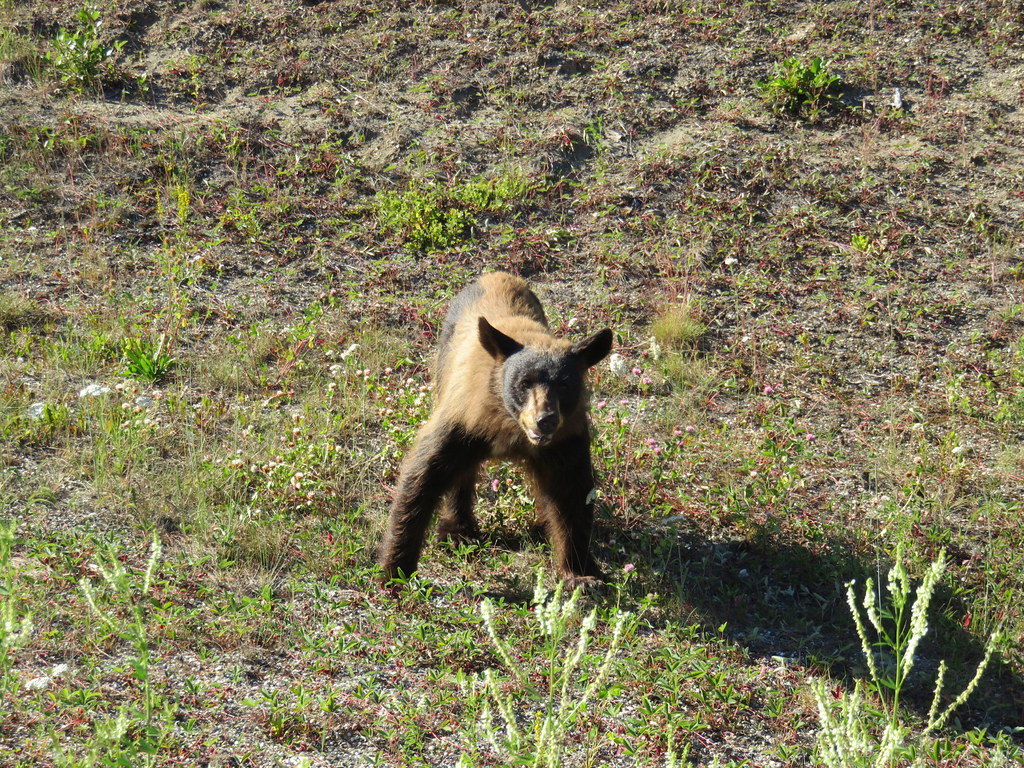 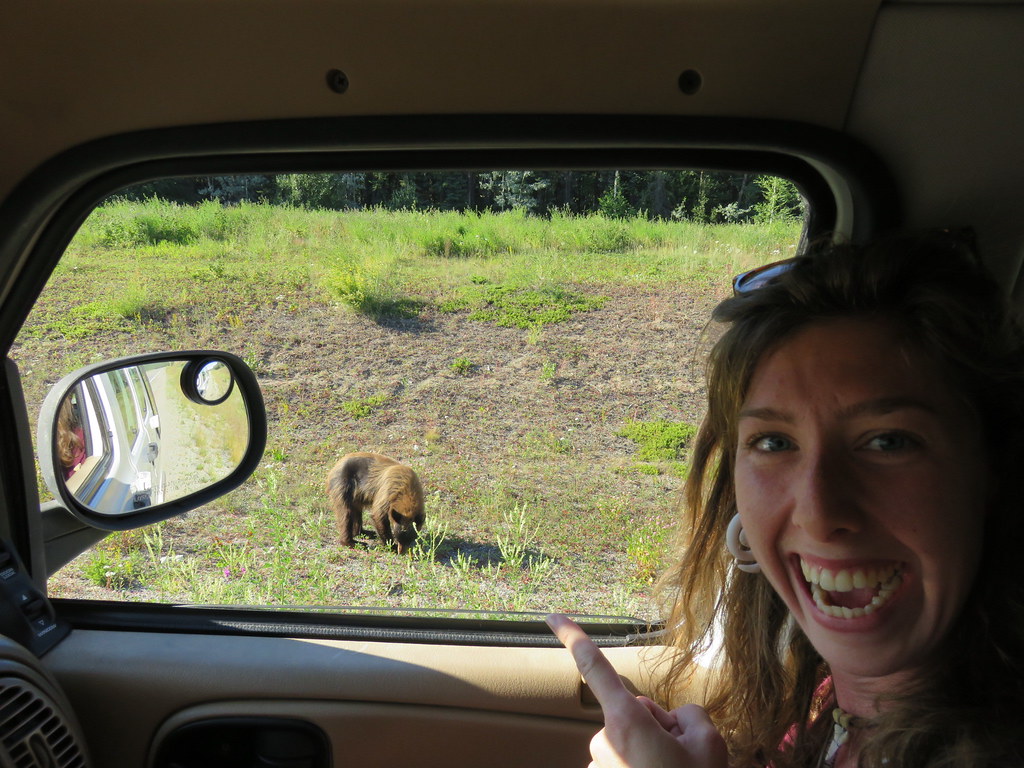 Back on the road we passed two bison who were lying down and panting by the forest line, they looked seriously pissed off about their thick, fury attire in such hot weather. We found a great place to camp with 360 degree views for wildlife spotting. The whole area was covered in tiny wild strawberries so we grabbed a bowl and began picking. We hit a patch where there weren’t many berries and quickly saw why; a big, red, berry riddled poop was left by a bear fairly recently. There was also loads of bison dung around the area and giant hoof prints. We did spot two of the gentle giants walking along the road while we were cooking which was pretty cool. After dinner we wandered down a forested dirt road which was dark and eery. There were bison prints everywhere, along with big dusty pits and pushed down trees from the beasts, it was like we were following the footsteps of a dinosaur. We didn’t like it much down the dark woods so headed back with dozens of mosquitos following us and had to do random sprints to try and loose them. 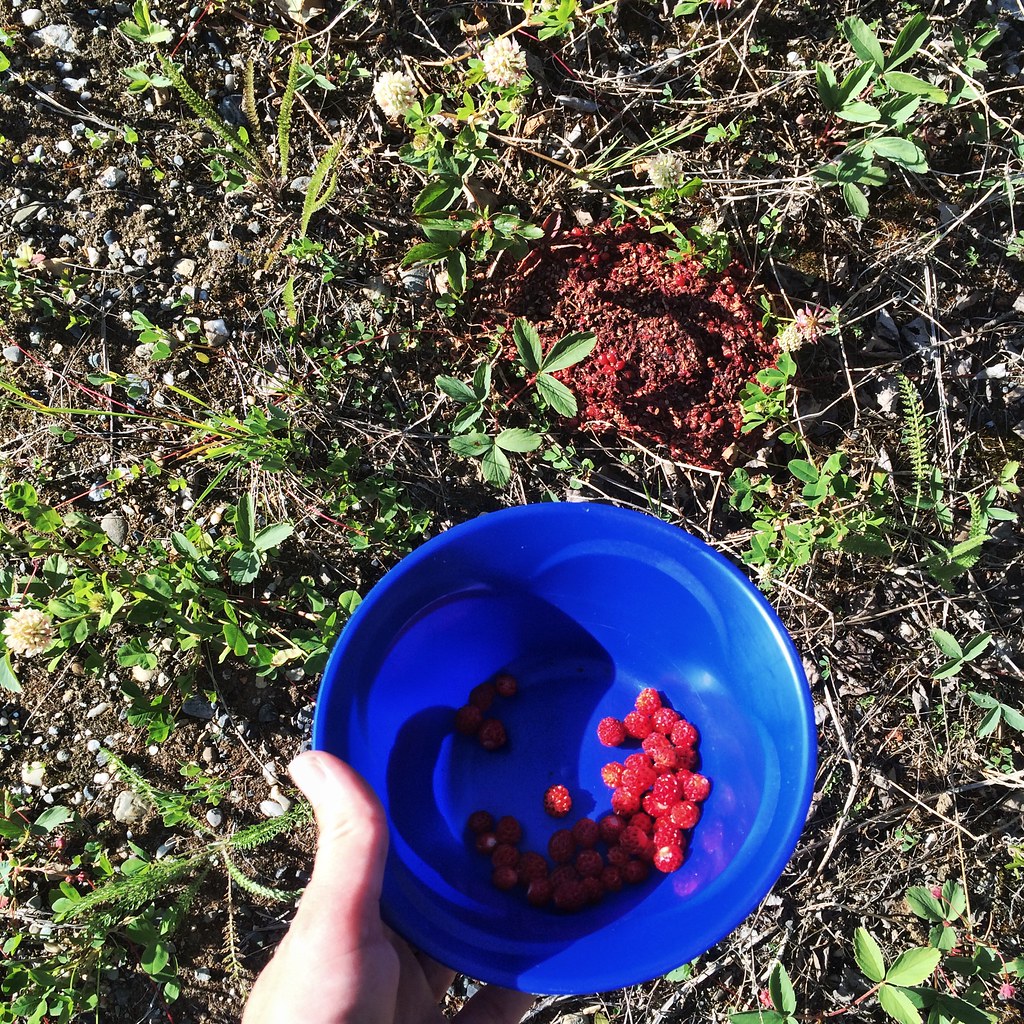 The next morning we set off under the warm sun and saw another bear!! Wahoo! It was definitely a black bear this time and he was on a mission. The speed of a walking bear is insane. He was plowing through the meadows and barely visible at times through the high plants. A fast trucky drove past and scared the bear causing him to do a frantic run into the bushes and back out to a grassy patch in front of us. He looked exhausted, and sat down panting before totally lying down and taking a nap. It was bloody adorable. After only a few minutes he got up soaking wet and we realised he wasn’t having a nap, he was cooling off in a boggy area, that smart little bear! We continued on the awesome drive and the wide meadows along the road sides turned to freshly mowed grass and we wondered if it would increase or decrease our chances of seeing more wildlife. Well, we saw another bison so that was great, he stood dead still like a statue and just stared ahead like he was in a trance. Then out of nowhere he threw himself to the ground and rolled back and fourth throwing his legs up in the air and having a huge dust bath. It was awesome to watch! He’d then stand up, shake off, try to act normal and then do it all again. I don’t know if it’s for the heat, the bugs or a combination of the two but he was loving it. 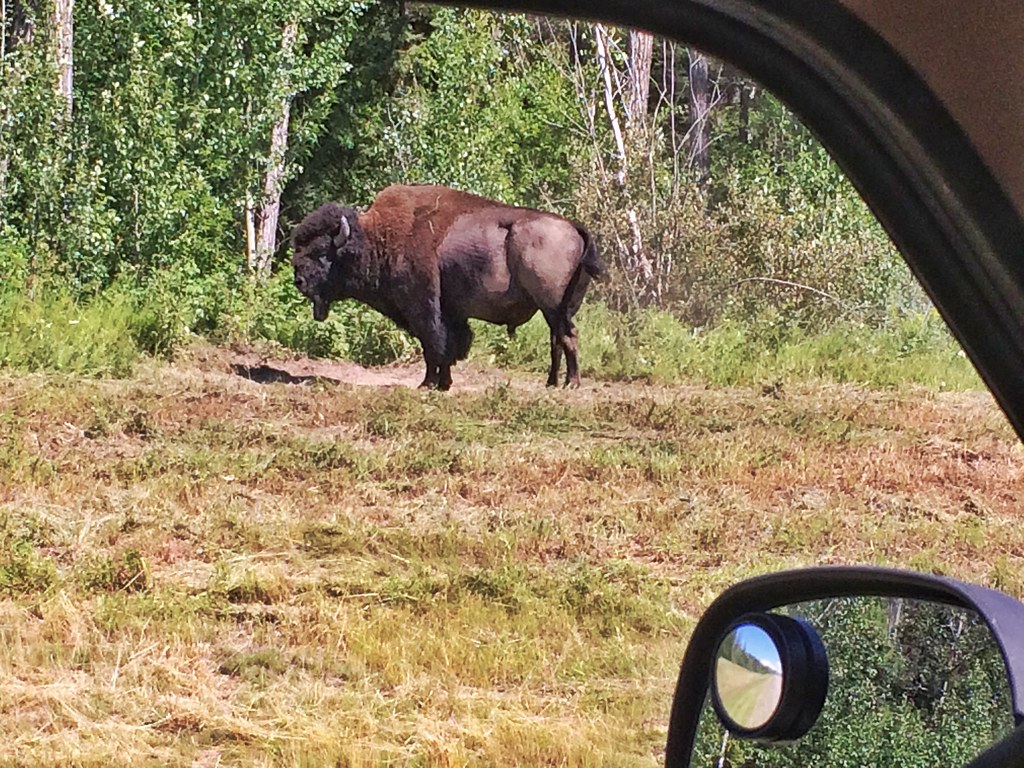 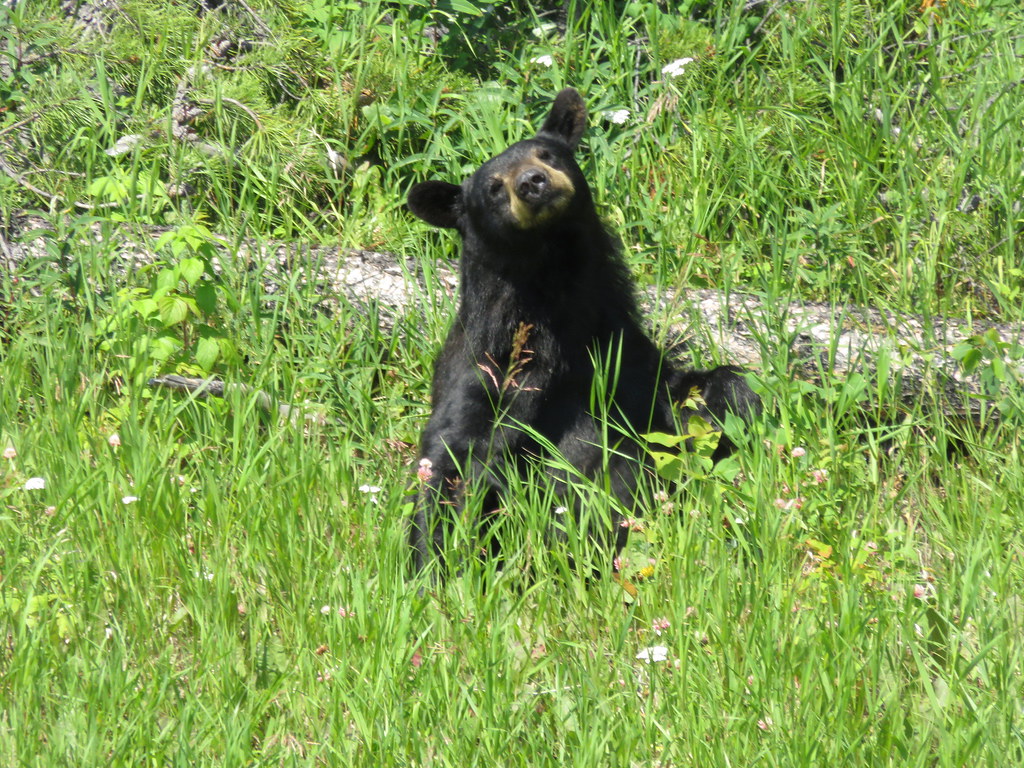 The wildlife drive continued to impress us with the climax of the day and probably our trip…Craig spotted a bear running and quickly said “and another bear! And another one!!!” It was a black bear with two cubs and they’d just made a dash ahead of us into the woods. By the time we got there they were gone which was a shame. We were ready to stop for lunch and there was a pullout to the left below the highway but as we turned in Craig saw something on the grass verge which we thought was another bear, we zoomed in with the camera and I declared that it looked like a dead bear lying upside down!! Surely not! We drove up to see if my eyes were telling lies and they were, thank god! It was just a log with a couple pieces of bark that had shredded edges and looked like bear claws. So back we went but this time I spotted the bear family. Instead of continuing through the woods they cut down a grass alley through the forest and onto the freshly cut grass verge of the road. Oh my god, they were the cutest little family. They all walked in a line together and then the mum took the lead. Cub 1 followed closely grazing with mama whilst cub 2 was quite the adventurist snooping around and lagging behind. There was hardly any cars around so we had the sighting all to ourselves. Suddenly the mum went to a rocky area and vanished. It was a culvert that led under the road. Cub 1 followed and we were worried for the second one who suddenly looked around and clearly thought “ah shit I’ve lost them again” thankfully he found them in the culvert and we thought what a clever mummy taking them into a nice cool, shady spot. 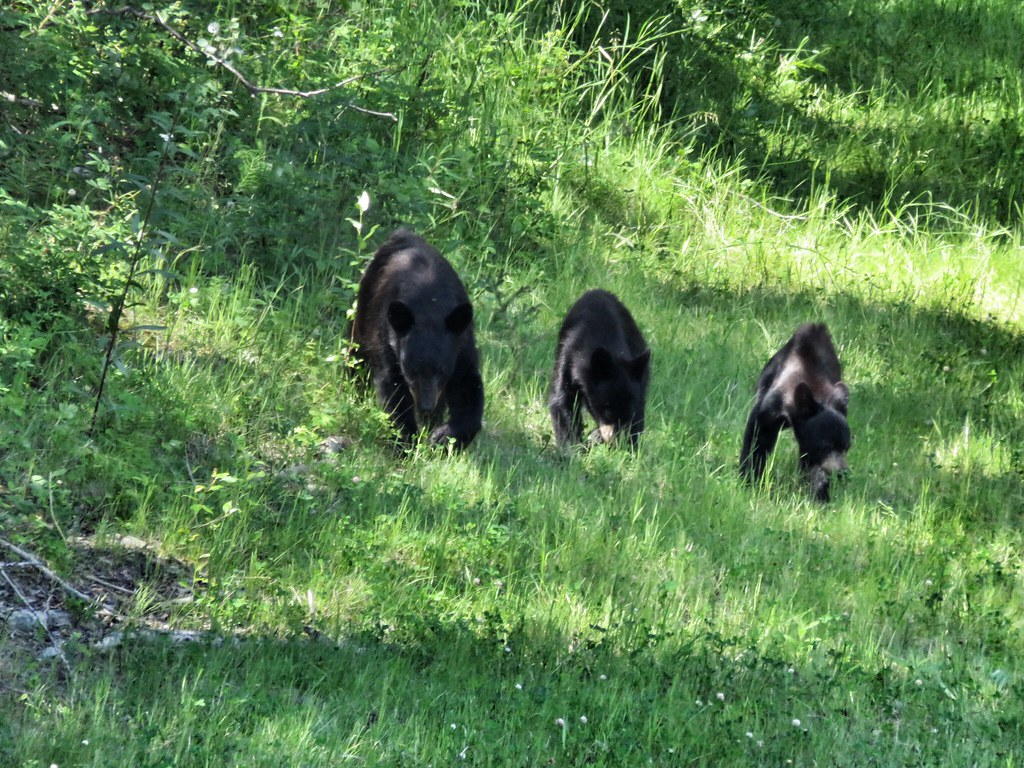 The culvert actually led under the road to the pullout where we going to have lunch so we did as planned. This side of the culvert had lots of rocks around it and the tunnel looked far too small for them to fit through but Craig kept his eyes on it incase they came out. It was so hot inside Daphne, literally like a sauna so we had all the side windows pushed out but didn’t want to leave the front windows wide open with Bears nearby so we did them about two thirds up. I cracked on with making Nutella and banana toasties in the back and it was a good ten minutes before Craig said the Bears were coming out. They all emerged and we began filming them from the van. The mum started coming to my side of the van but looked back to check on her Cubs and realised they weren’t following so ran off back to them. Then they all proceeded in a line past the front of Daphne, seeming totally oblivious of us in the van. Suddenly mama bear headed left towards the drivers side where Craig was sat and he quickly put his camera down and his hands on the keys at the ready. We didn’t want to make the Bears jump by doing the windows up the whole way, we certainly hadn’t expected them to come so close to us though. Cub 1 followed the mum and she was just below Craigs wing mirror but we couldn’t see where the mama was. I was filming and looking around to see if she’d lost interest and wandered off when her face came up and was just 1 foot in front of us! Holy crap!!! She was standing up at the front of Daphne, leaning on her bonnet and looking through the windshield towards us!! Craig quickly turned the keys and started the engine, we didn’t know if she’d start climbing on the van and we didn’t want to cause any harm to the Bears or ourselves but at least if the engine was on we could do up the windows and be ready to move. Once the engine fired up she jumped back and ran to the culvert entrance with her cubs. They didn’t stay there long and headed back in front of us and into the forest. Craig and I were in shock….ok, now that was our closest bear encounter!! She must’ve smelt our lunch. We couldn’t believe the video I captured, she just popped her head out of nowhere and was looking in at different angles, maybe the sun was glaring and she couldn’t actually see us? What a crazy encounter!! 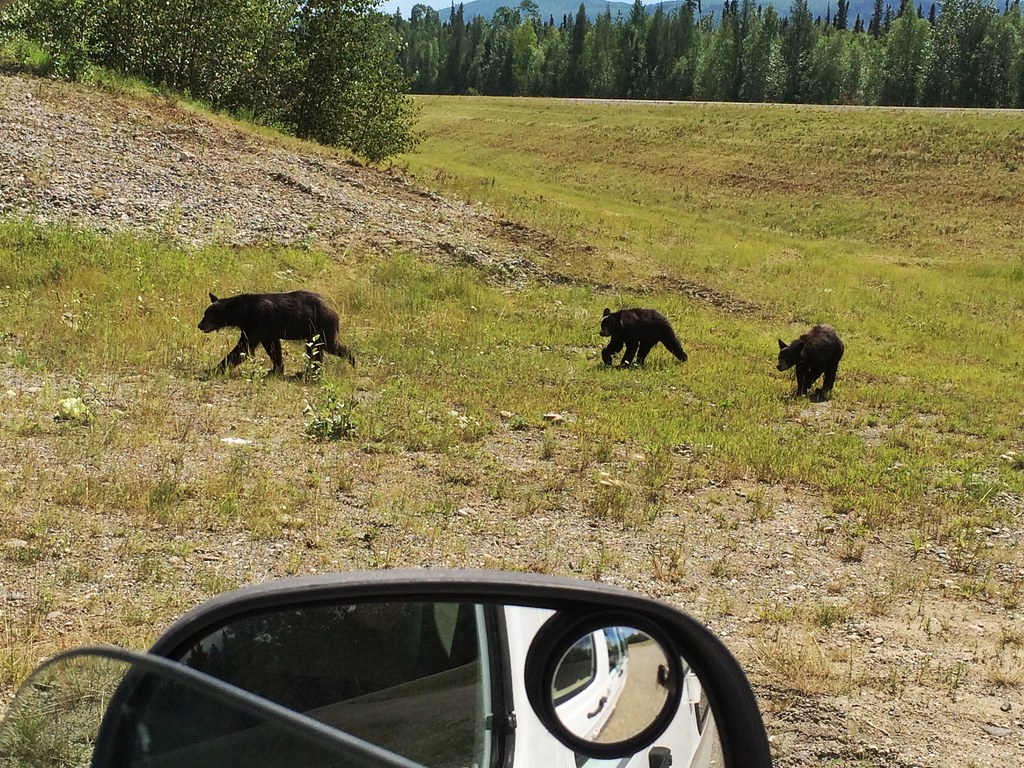 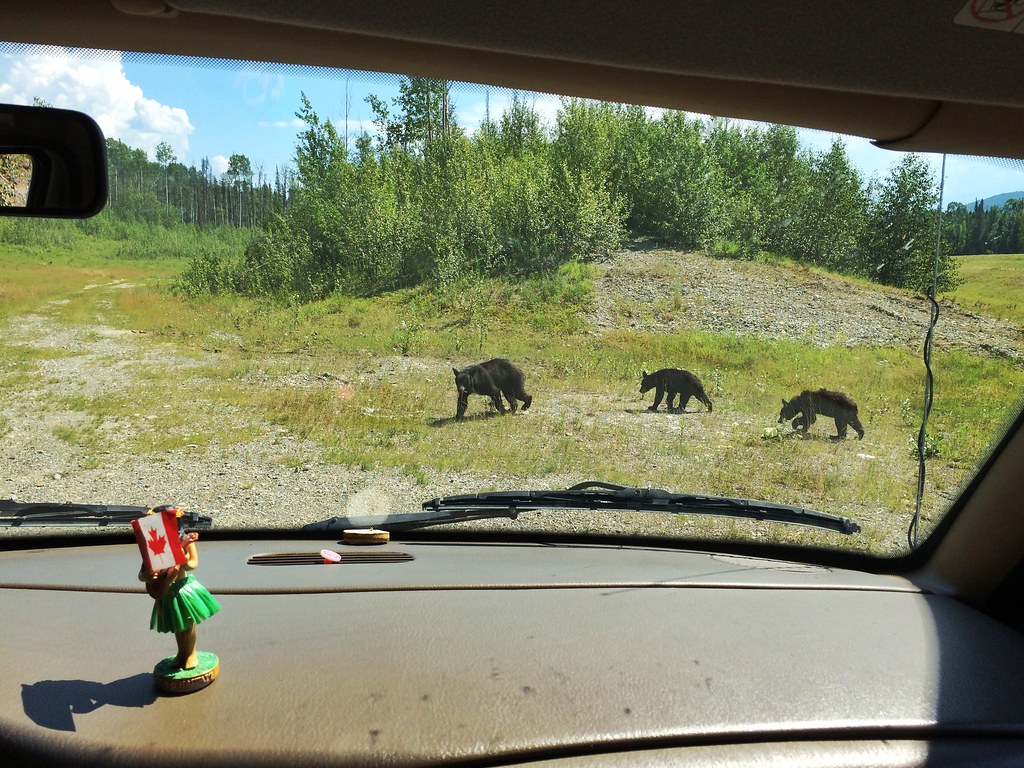 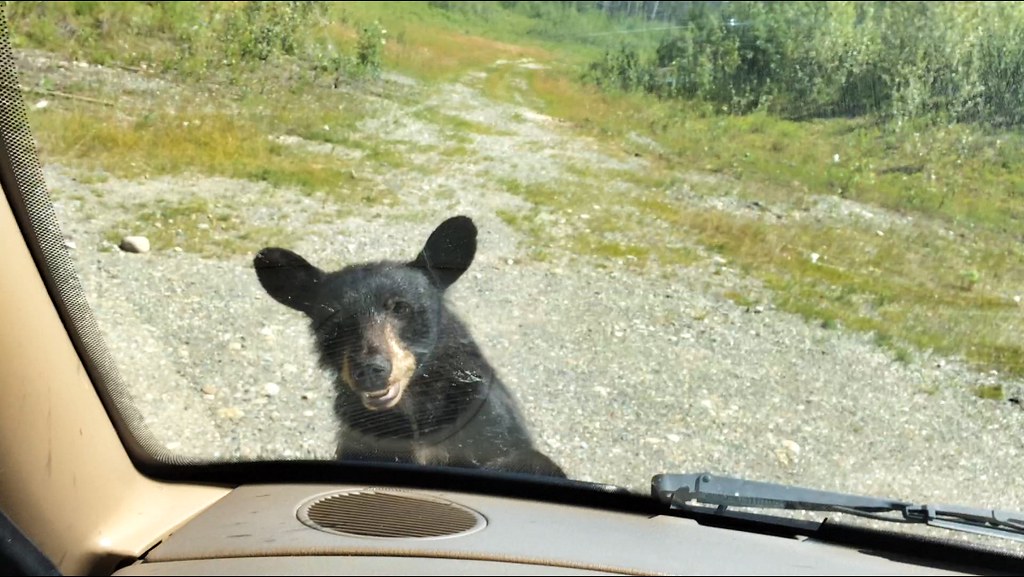