There was a horrible noise coming from Daphne as we left Skagway and we had no idea what was causing it. The town ‘mechanic’ was just a man that worked out of his garage and charged us $25 for a five minute diagnosis. He said we should make it back to Whitehorse OK so we hit the road and Daphne was fine. When we got back to civilisation and visited a garage we were told there was over a week wait to be seen and there was no way we could hang around that long. So Craig had another look under the bonnet and actually found a loose screw in our power steering pulley. At that moment a mechanic walked past and we mentioned that we had a screw that didn’t really look like it should live there. He joined Craig under the bonnet and grabbed a torch and metal wire to try and get the screw out but it was trapped. He asked Craig how mechanical he was as the unit would need to all come off and we both let out a laugh…Craig decided to answer back with a question “what are you doing after work tonight?”. So the lovely man named Chance kindly agreed to help us back at his house. I told my mum where we were going just incase we went to an ax-murderers house, ya never know!! It was rather worrying driving with the loose screw incase it jammed at any moment and all the probing had caused the screw to move and boy did it fly around when Craig started the engine. We followed Chance out of the city and into the wilderness, the last section was along a dirt road to a little off grid community. We met his lovely wife, Karen and had a great chat with the couple. They lived in a stunning location and in such a nice wooden house, I instantly felt safe – we were definitely not going to be killed by these strangers!! 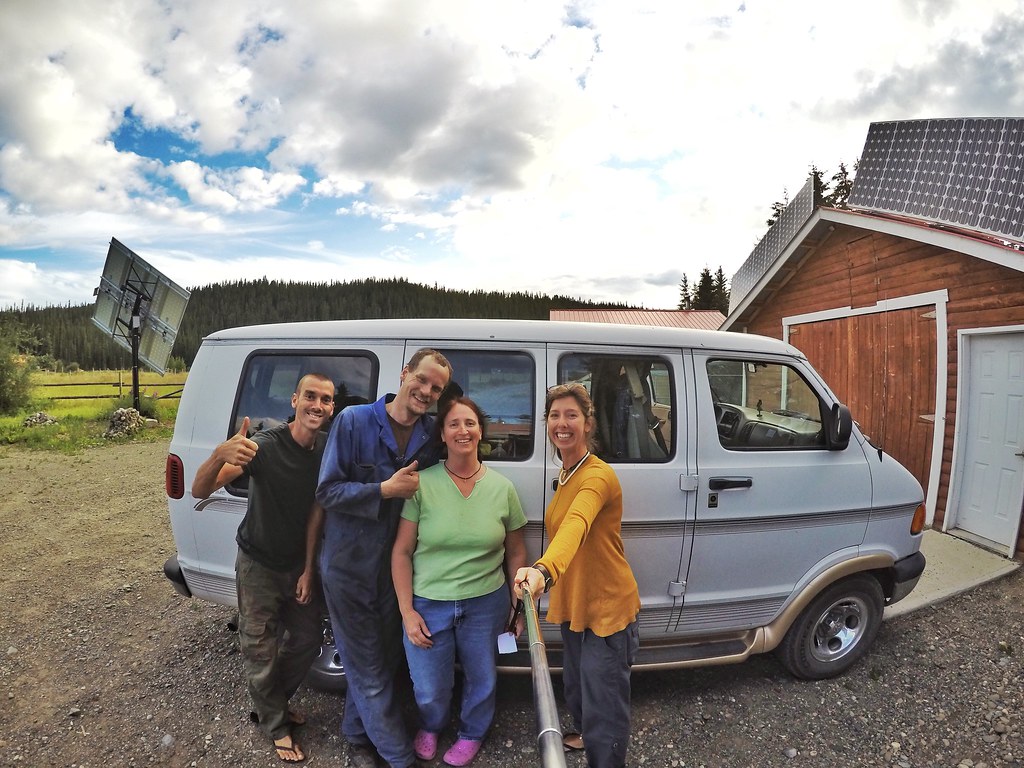 Chance managed to find the loose screw and said it hadn’t caused any damage, hooray! So that all went back into place nicely. The couple told us all about how they live off grid, how their solar panels, battery’s and generators all work and it was an interesting insight into the lifestyle we dream of living when we’re older. Karen picked me a load of sweet sugar snaps from her greenhouse and they were the tastiest greens ever, we tried to cook with them that night but they were so delicious raw that we got carried away snacking on them and there were none left. The next day we headed to the scrapyard in Whitehorse. It was pretty old school with absolutely no safety standards, just how it used to be in our local one back home but that’s all changed now. We walked past cars towered three high and managed to find three Dodge Rams. We were looking for a hose which had somehow snapped on our van and Dodge don’t make the part anymore. It was rather unnerving for Craig trying to look under the vans while so many were precariously balanced above him. Two vans were a no go but there was one just like Daphne. It had no wheels which meant it was really hard to get underneath but Craig quickly found the hoses he needed. Sadly no matter how hard he yanked them they weren’t budging, it was so frustrating. So we tried a different, more dangerous approach from the engine bay. The van had a car on its roof which had crushed down the roof, so much so that you couldn’t get inside the van. We managed to move a load of shit out the way but the engine bay area wouldn’t budge either. There was broken glass all over the floor so I cleared the bits away and Craig tried one last tug from underneath it and would you believe it the hoses came loose! The cheeky worker tried charging us $40 for the bits of plastic, man they rinse the tourists, it was like being back in India and Craig actually bartered with him, managing to get the price down to $30. 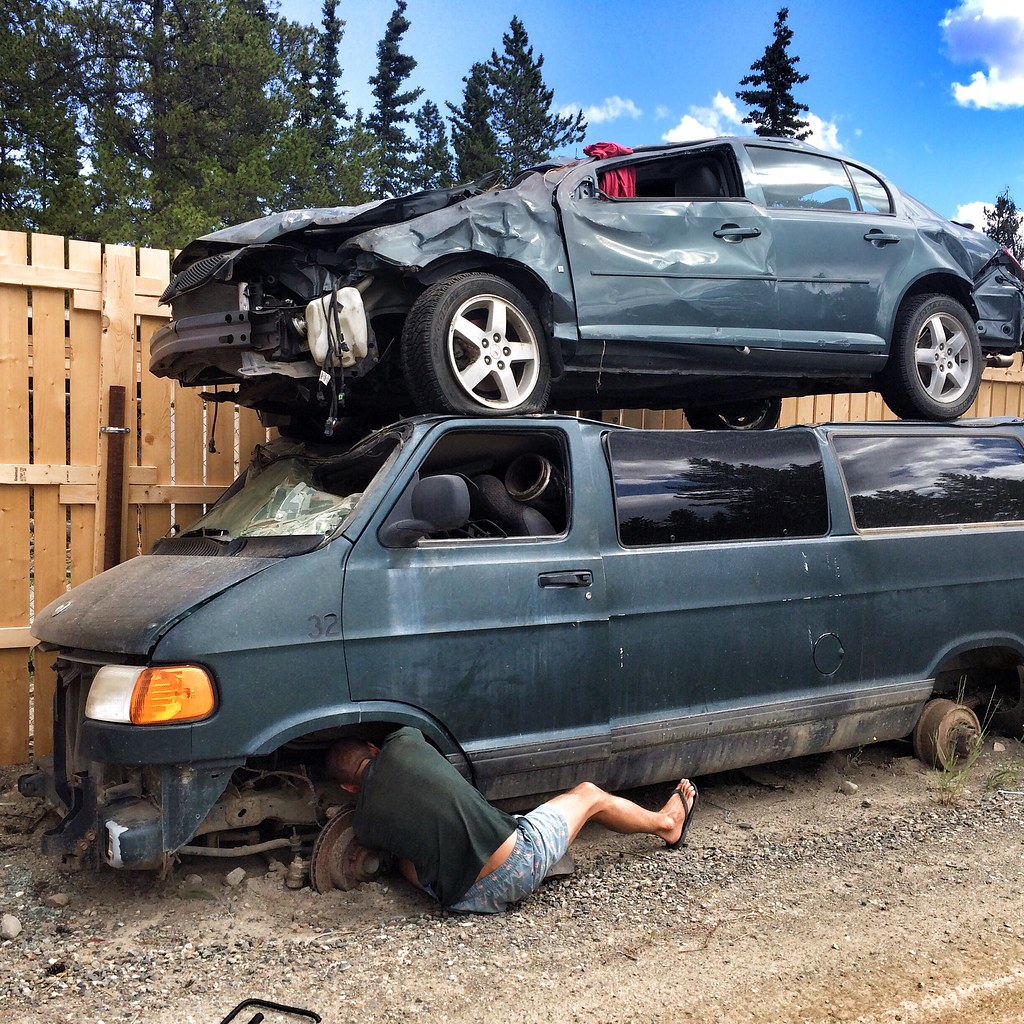 So we had the bonnet up and were following the old hoses and refitting the new ones and it was all going well until we couldn’t work out where the other end of one of the hoses went. It was a head wreck but we were totally lost and the guys in the garage nearby had no idea either. So we kind of had one option which was to hope Chance would know where it went, so we went to the junction of their road and waited awkwardly to surprise him with us pleading for more help. 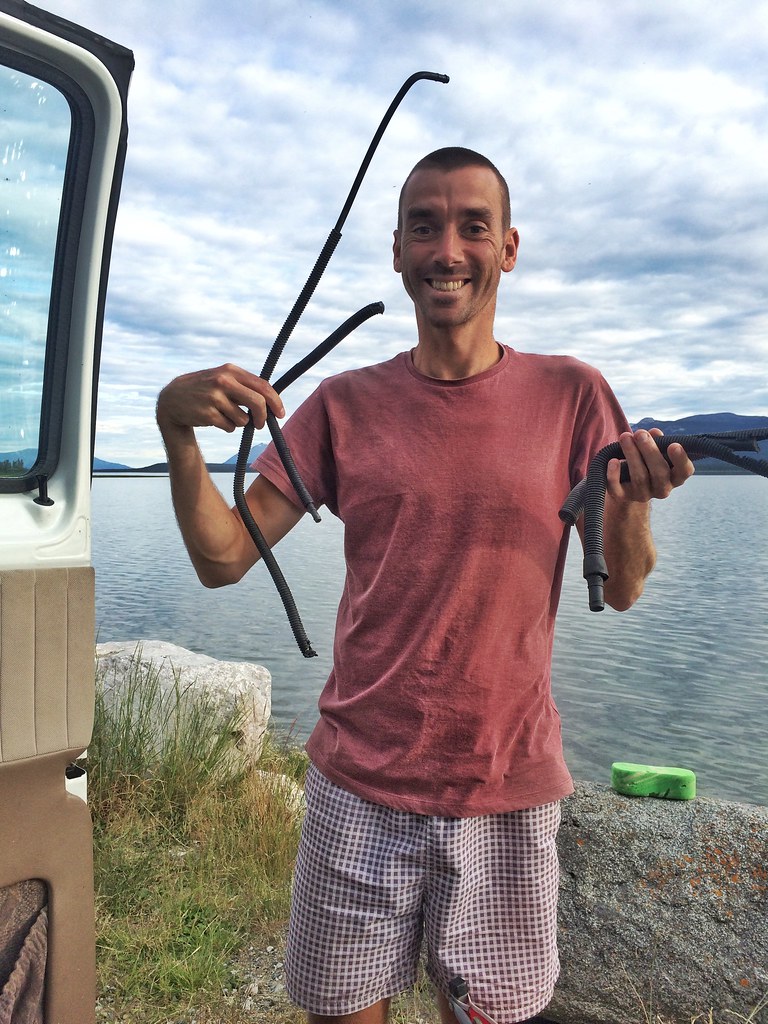 It was so hot outside that we had a swim in the river while we waited and Craig picked some delicious wild strawberries. Chance pulled over when he saw us and kindly took a look but was just as baffled as we were. I wandered along the river with Karen chatting away while the boys wrecked their brains and it was only when everyone was ready to give up that someone spotted a diagram on the inside of the bonnet. The hose didn’t go into anything on the diagram! After all that and it was supposed to just have one end open to the air!! Well, we were very happy that the mystery was solved and said our final farewells to the super friendly couple and then hit the road east. We were beyond happy to leave the Whitehorse area, it’s been very doom and gloom for us going back and fourth getting issues fixed on Daphne but we did meet some great people. We had a lovely evening drive and turned off towards Atlin. Most of the road was dirt so we just did a few miles till we reached a stunning spot to wild camp along the Little Atlin Lake. 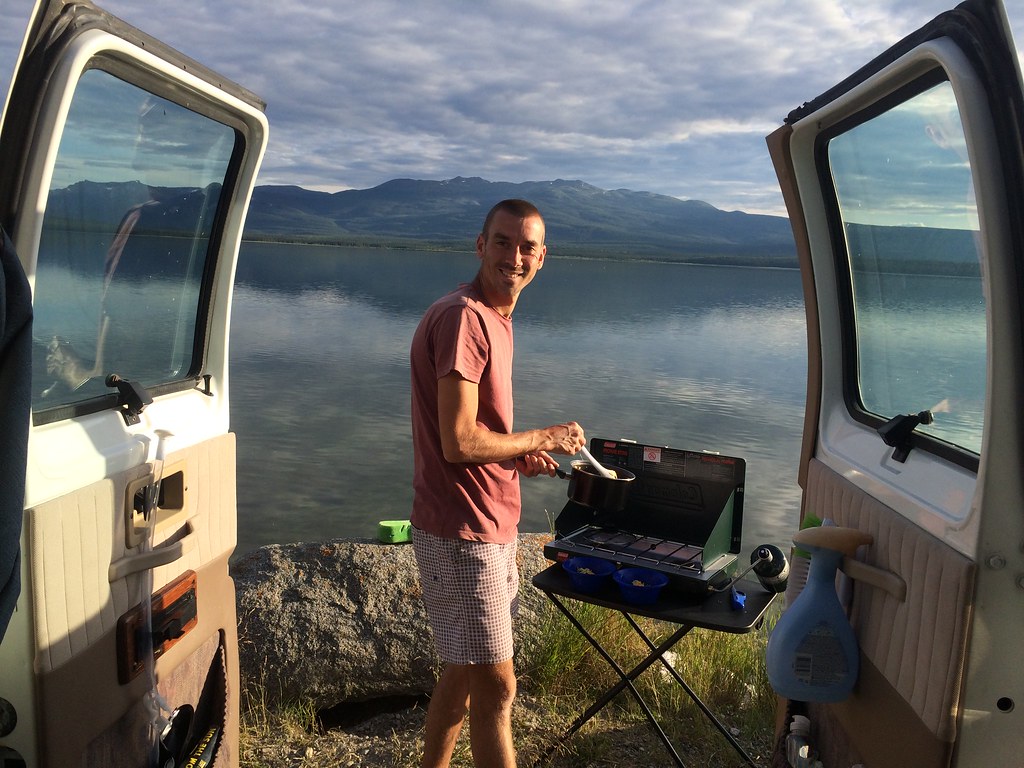 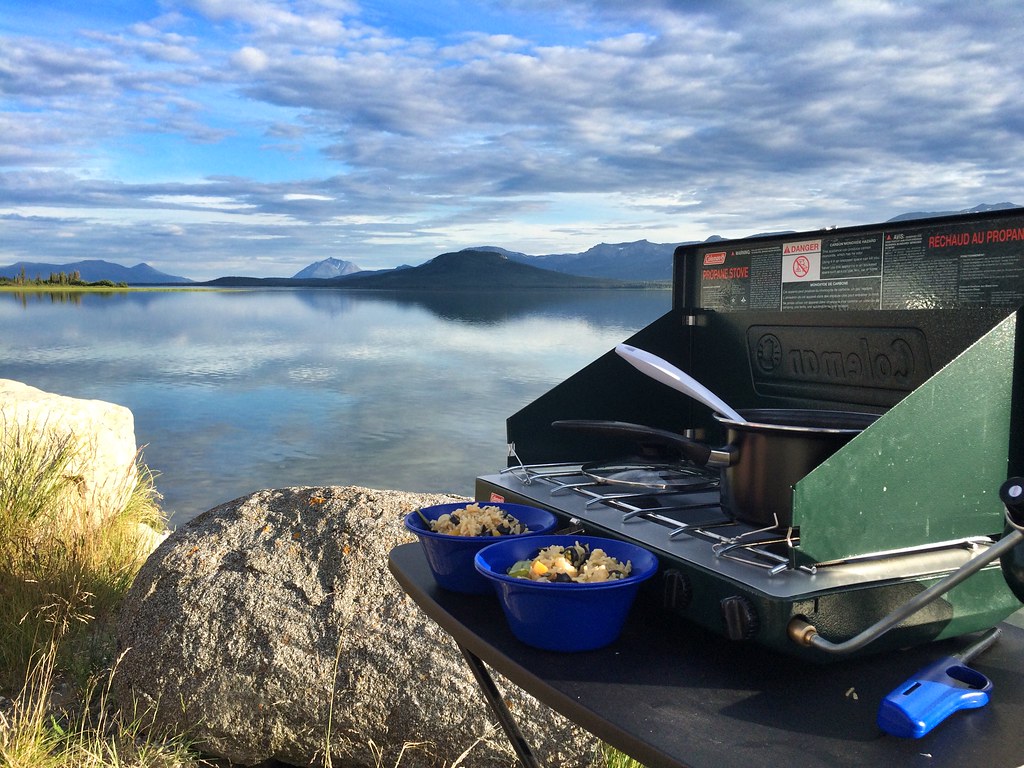 We were right besides the water and felt like our journey was back on track. No more Walmart car parks for a while. There were hardly any bugs around so we had a delightful alfresco dinner and watched the best sunset of our trip. It started off looking like a faint pink aurora and got brighter, bigger and more dramatic by the minute. It was so intense like candy floss and raspberry ripple ice cream had been mixed together and smeared across the sky. 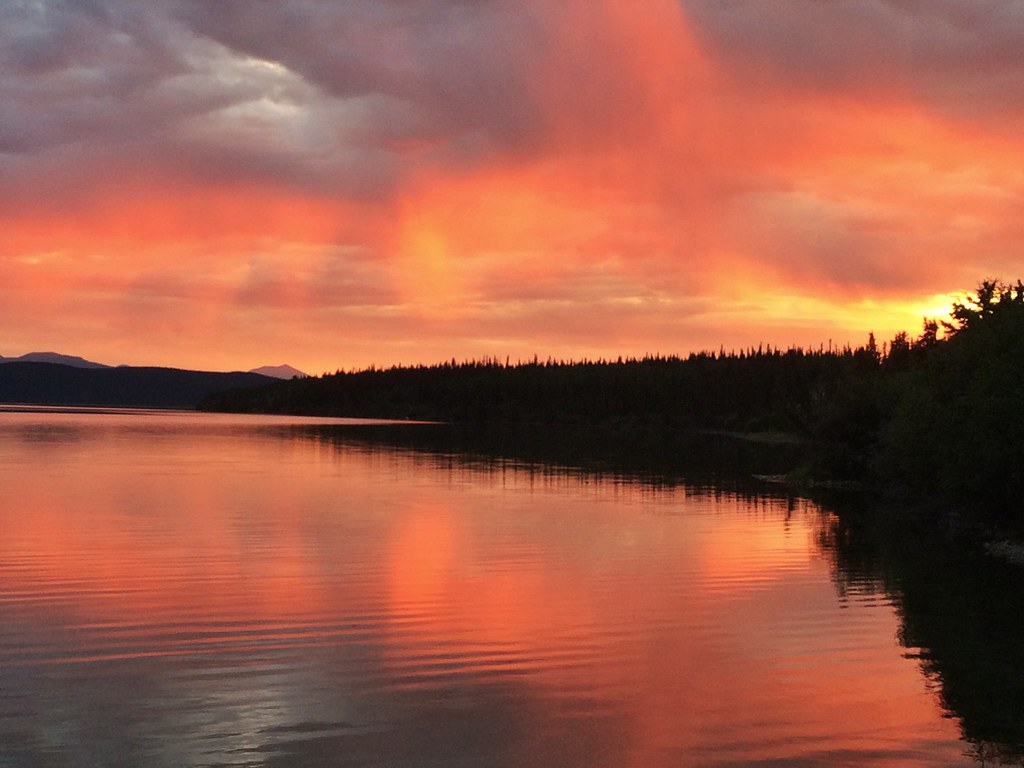 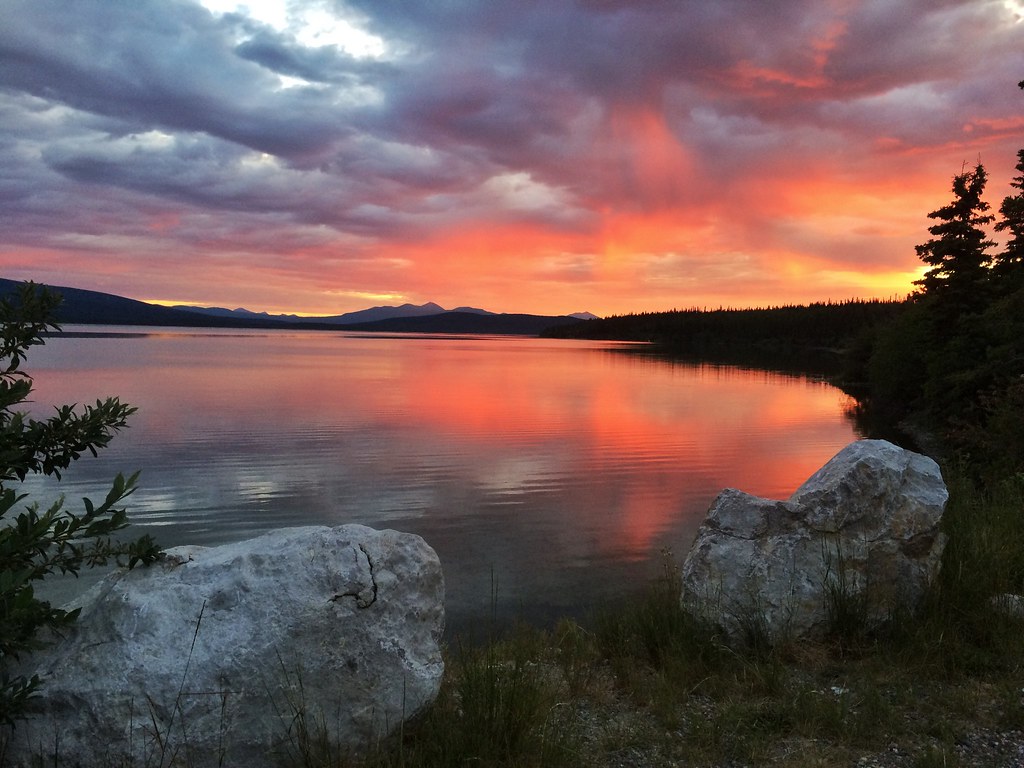 After another days driving along the Alcan we found a great camp spot besides a beautiful deep creek which was home to a beaver. We set up our chairs in the scorching sun and Craig began prepping dinner while I caught up on my journal. Suddenly someone appeared out of nowhere and scared the shit out of me. It was a lady saying hello, she was very chatty and asked if we were camping there and if she could join. We almost always camp on our own so it was a bit odd sharing our wilderness but she (Pam) was ever so friendly. She used to live in Alaska but has been in Washington for a few years and came back up to the last frontier where the main sales of her business are. She makes bbq sauces but really good, all natural ones that aren’t like the average sauce, they can be used on anything. She very generously gave us 3 bottles of her ‘Alaska Sweet & Spicy’ branded sauces which she’s won the world championships for the past three years. We tried the mild and hot sauces on our dinner which was a success and it’s opened up a whole range of new recipes for our campervan kitchen. 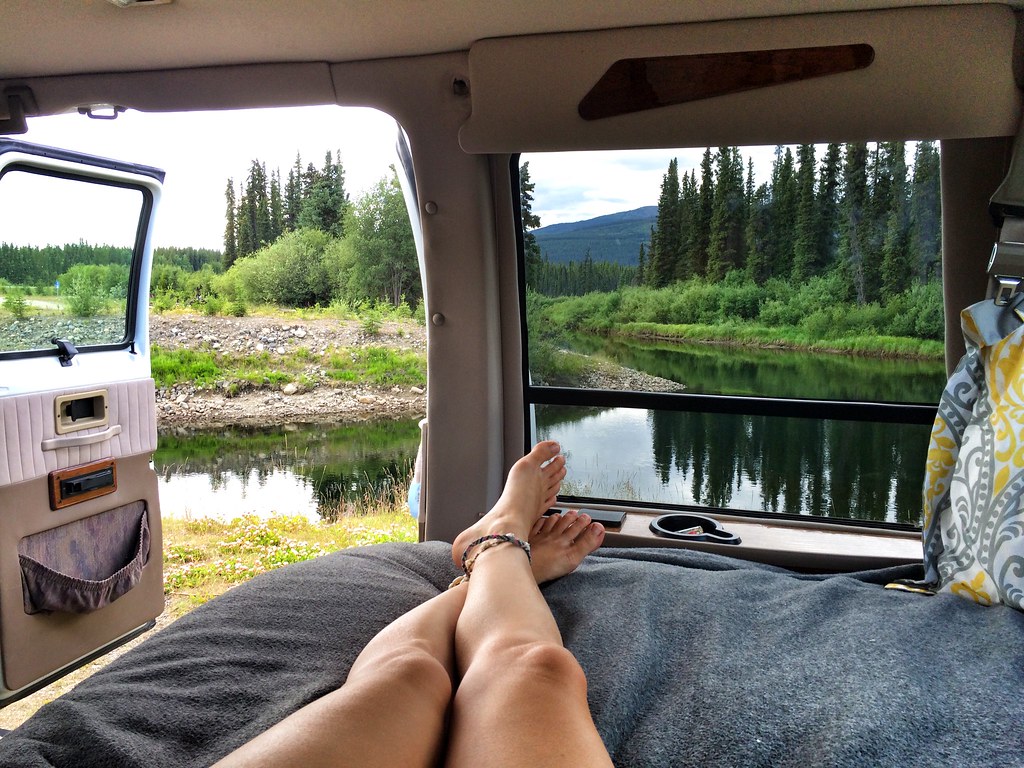 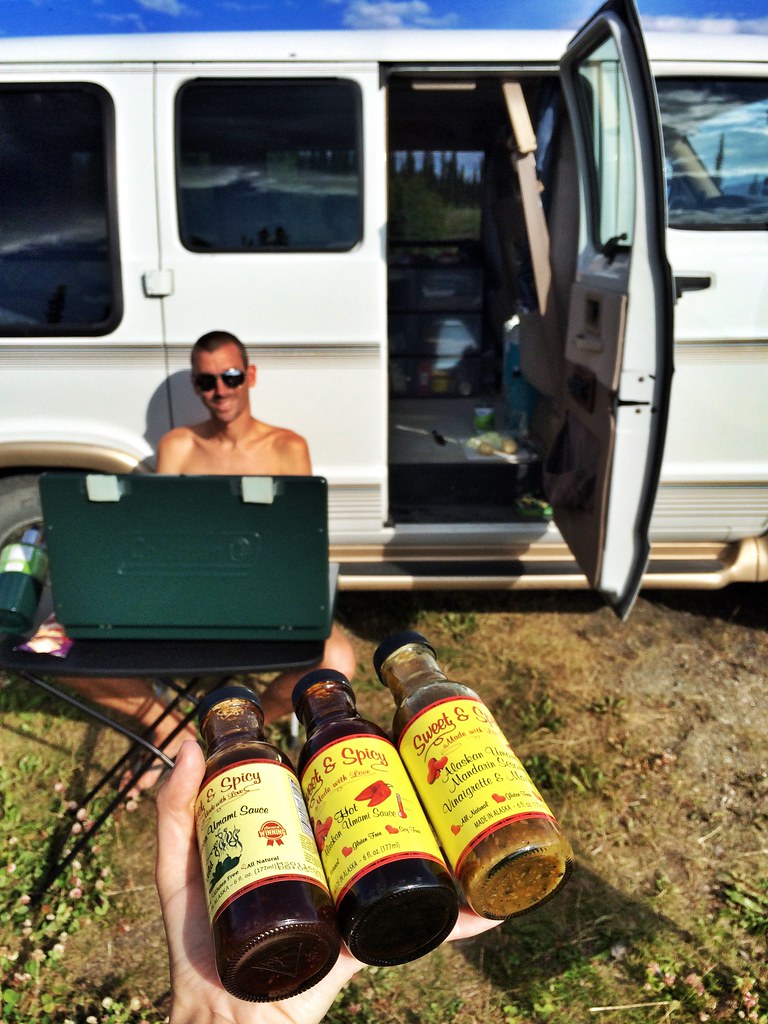 Pam had two amazing dogs which we adored hanging out with. Chica was a pit bull crossed with a rottweiler, the sort of dog that’s banned in countries for being too dangerous…but never judge a book by its cover my friends, she was the sweetest dog and just loved attention. She’d sit next to us for strokes and after a while slip gradually backwards for her belly to be rubbed. The other dog was the very gentle Gracey who was a golden retriever crossed with a blood hound. She was absolutely gorgeous! She was older and more mellow and loved her ears being stroked. They were two of the best behaved dogs and even ate out of the same food bowl. 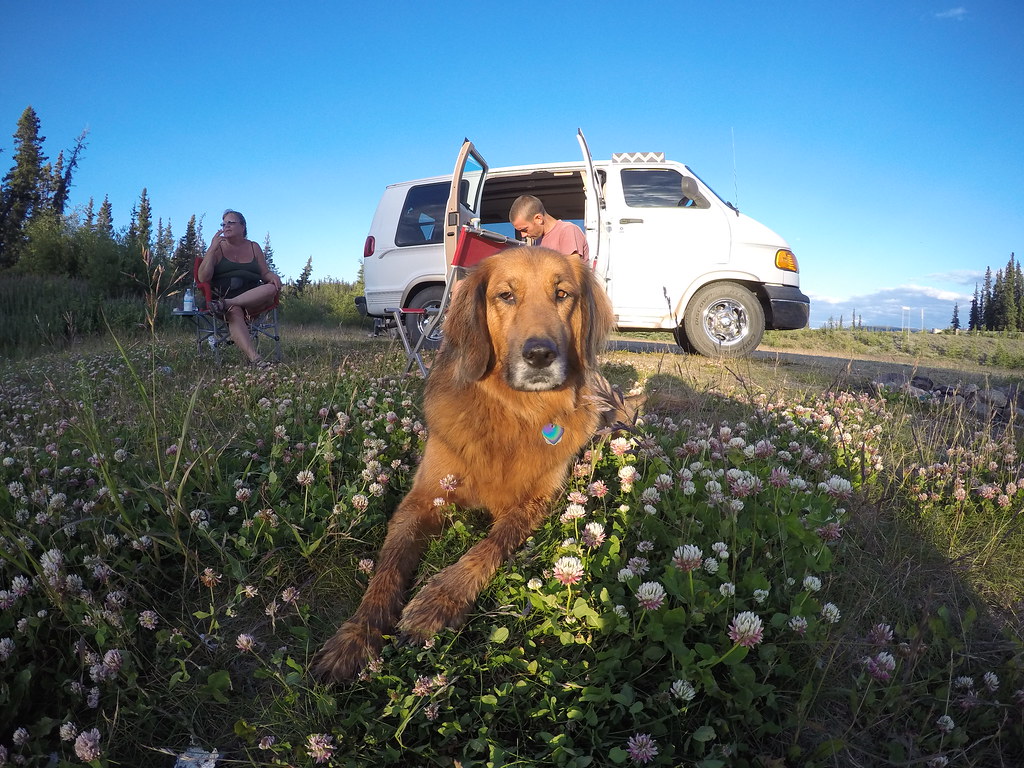 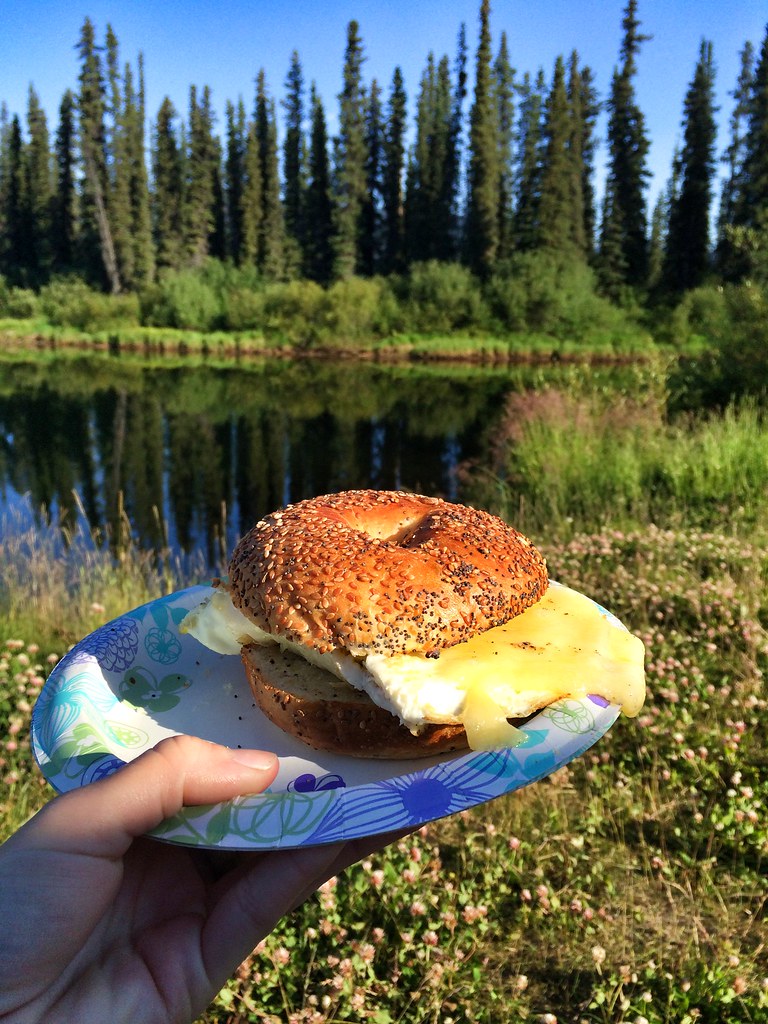 The sun eventually set and we stayed outside wrapped in blankets for a little warmth but mainly to keep the hoards of mosquitos off us. The next morning Pam treated us to breakfast. She sure loved to cook for people and made us a very American sized bagel filled with at least two fried eggs and melted sharp cheddar. Craig had ham in his with a side of reindeer sausage which she’d bought back in Alaska. It sure was good to be back on the road! We made it to Watson Lake the next day where we visited the famous sign post forest. It’s an area by the visitor centre with wooden poles that people have hammered signs into. It now has over 75,000 signs which vary from number plates and German village signs to roadworks and homemade roadtrip banners. It was a pretty cool place to wander around and we had a little sign we wanted to add to the collection. It wasn’t a traditional sign but heck, there were pots and pans, clogs and paper plates used to write people’s names on so ours kind of fitted in. It was a mini Daphne painting Craig did on a piece of slate one rainy day. We wrote on our details, glued a rope to the top and hammered a nail into a tree. Job done! 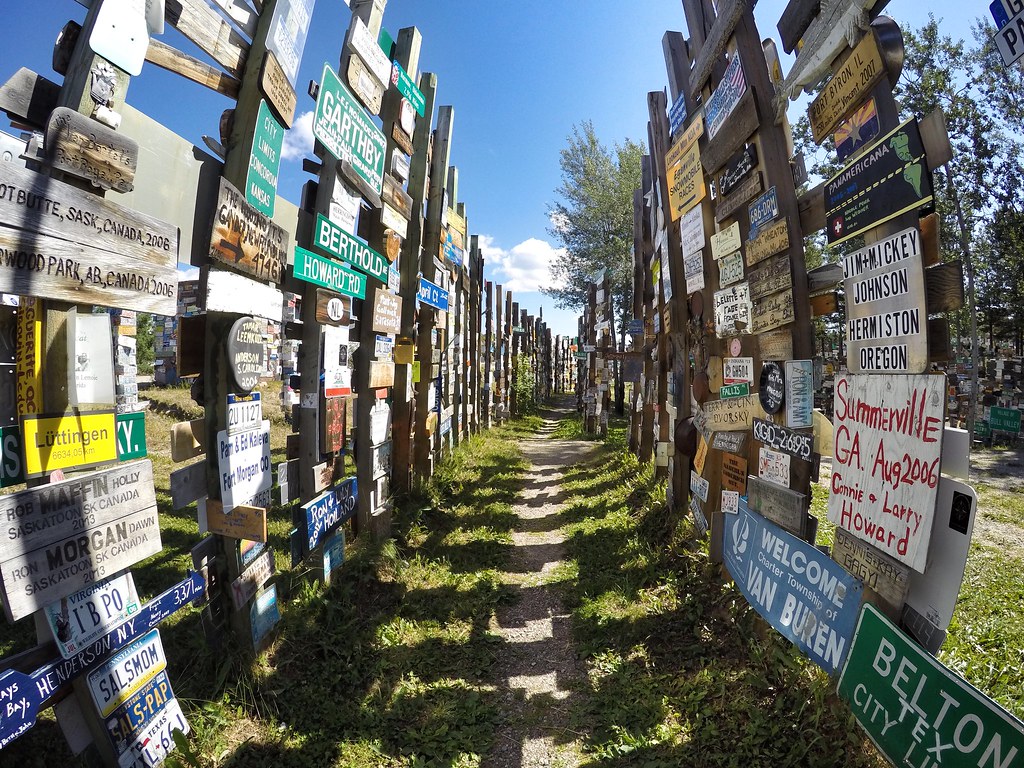 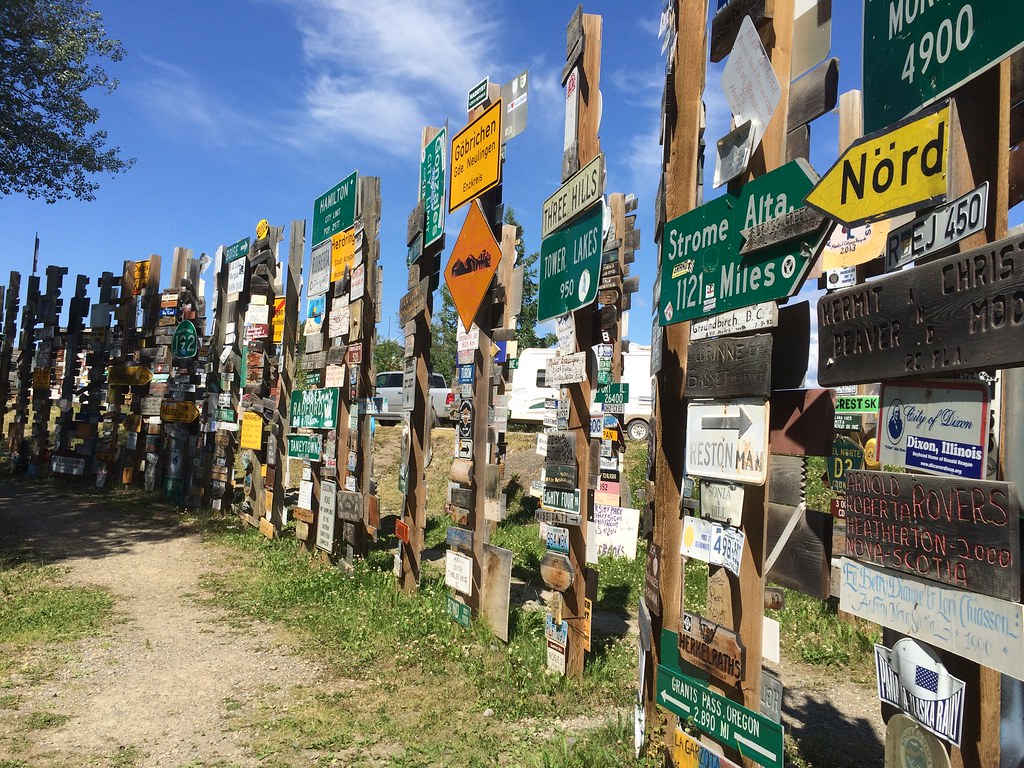 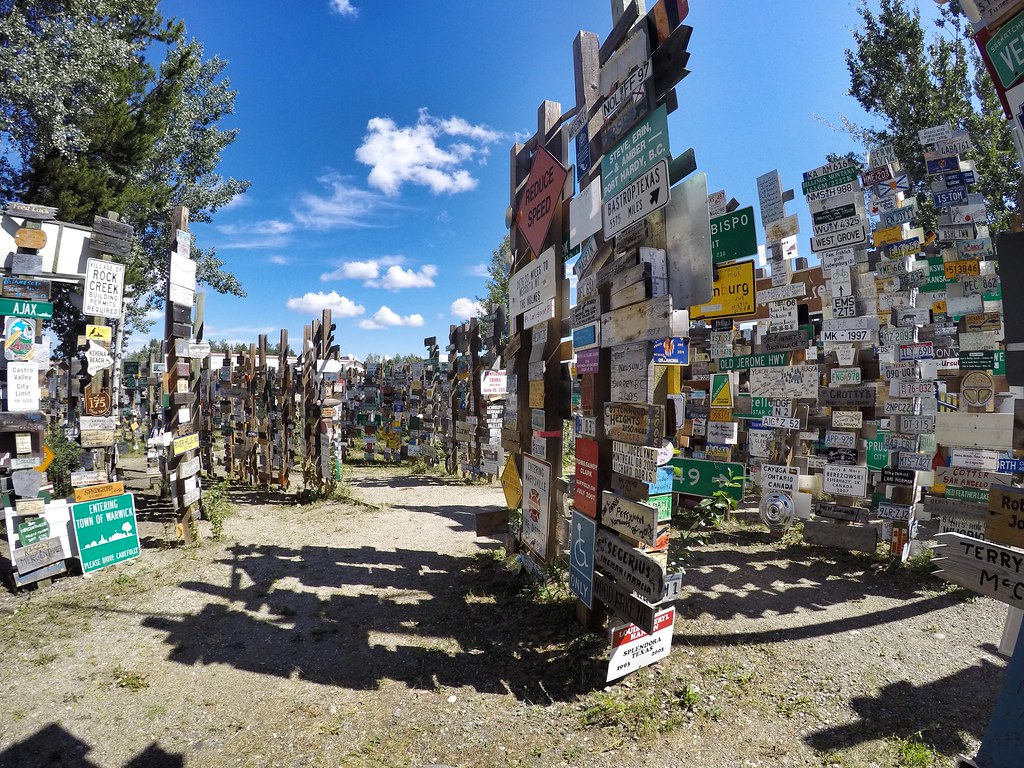 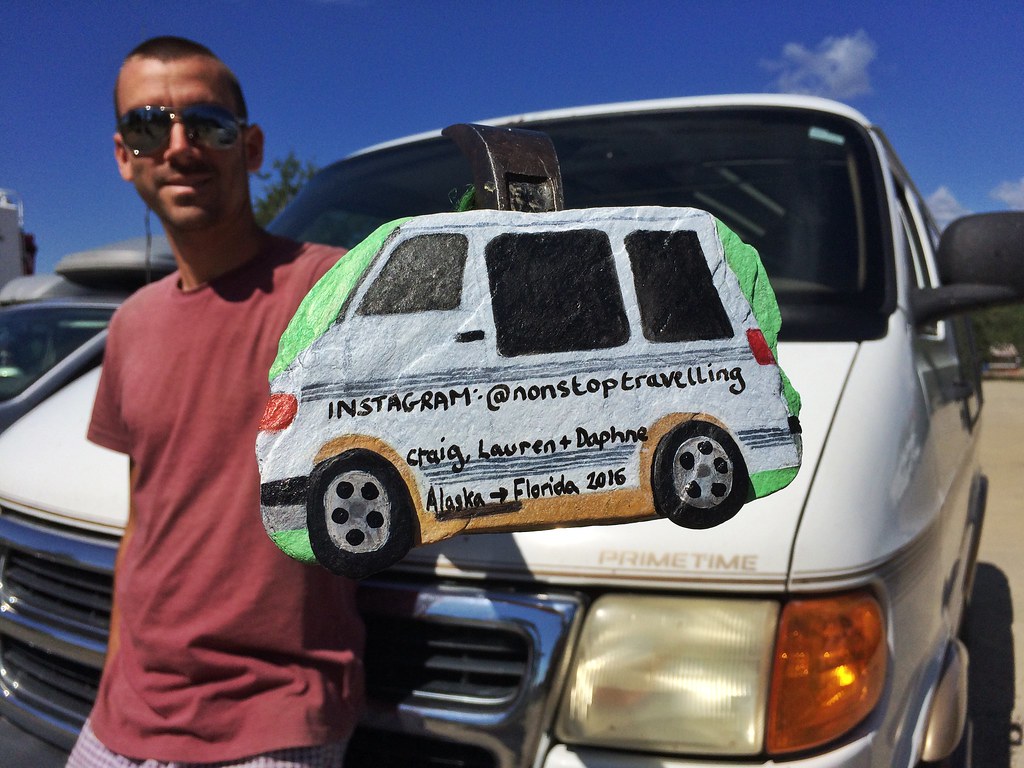 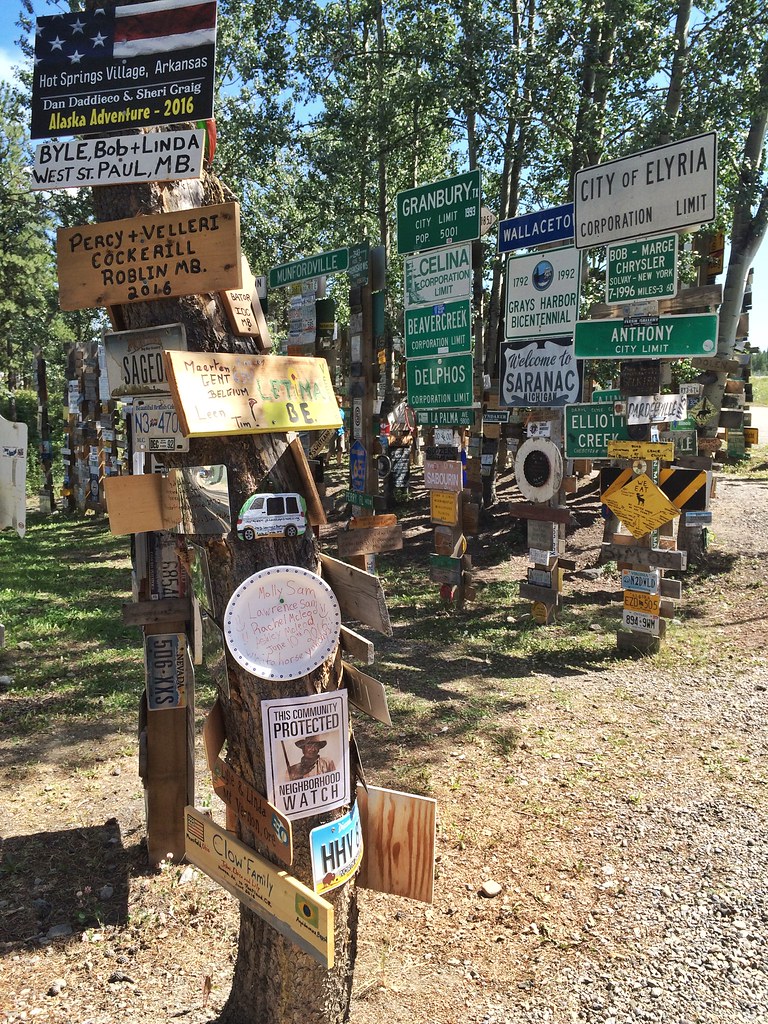 Just outside of Watson Lake was Lucky Lake, a small, crystal clear lake which was fairly warm thanks to it being so shallow. But wait, it gets better, they had a slide!! A super duper slide actually! Bizarrely it’s only open 1-4pm on summer weekends and thankfully we arrived on a Saturday. It was so quiet with just a dozen people around the lake, we asked the slide man if it was normally this empty on a Saturday and he said it was actually fairly busy when we were there! It was the perfect hot afternoon with no wind so we headed straight for the slide where cold water was gushing down it. For a tiny dot on the map, they sure put some thought into the village slide, it what awesome! I slid down so fast that I felt like i was going to flip out of the slide. What a fun way to end the day. 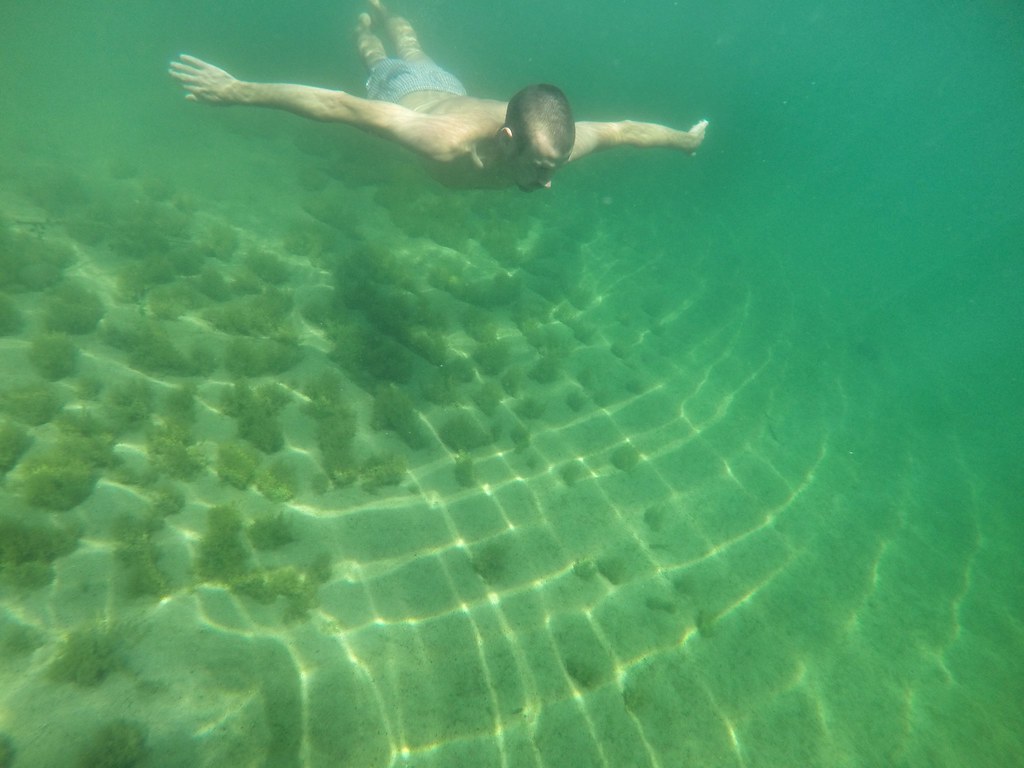 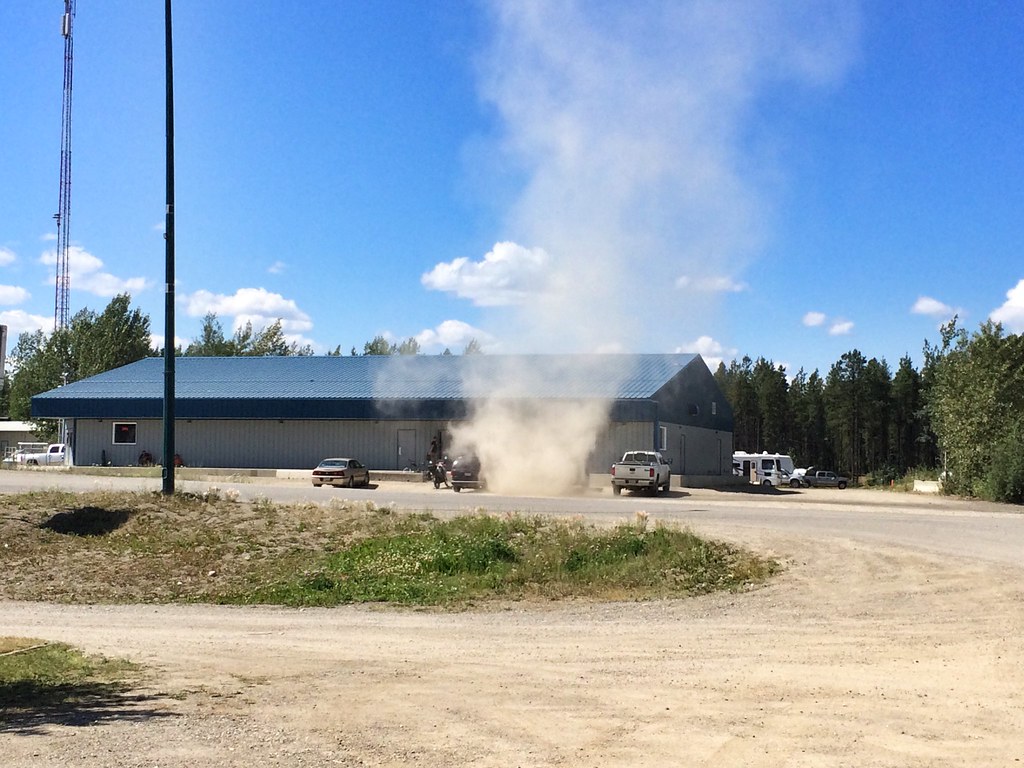 A tornado in Watson Lake?