Skagway goes all out for Independence Day and this year it was in celebration of the national parks 100th anniversary. A float passed us with 6 women dressed in pageant theme but each one representing an American national park, from a cowgirl Grand Canyon to a silver Glacier. The town was bustling and had a great vibe with heaps of events on. One of which was the ‘Egg Toss’, we had no idea what it was, maybe flipping fried eggs?? but we soon grasped the concept. Hundreds of people were partnered up and facing each other about a meter apart. Suddenly the man on the mic said something and everyone started throwing their eggs (not fried, just a normal egg) across to their partner. Then everyone was told to step back and ‘toss’ again. Gradually as the distance grew more eggs fell and cracked on the floor. I noticed two men (who I’ll call Bob and Tom) positioned themselves at the end of the line and were taking the competition far too seriously “back away people, I don’t want you getting in the way of my $100”. They were throwing the egg like their lives depended on it! They’d wait until everyone up the line had thrown and only then would they throw their egg. It really made me laugh actually, everyone up the line was having a joke, catching, missing, throwing together and these two had clearly spent all winter training for this very moment. I wanted them to drop the egg. 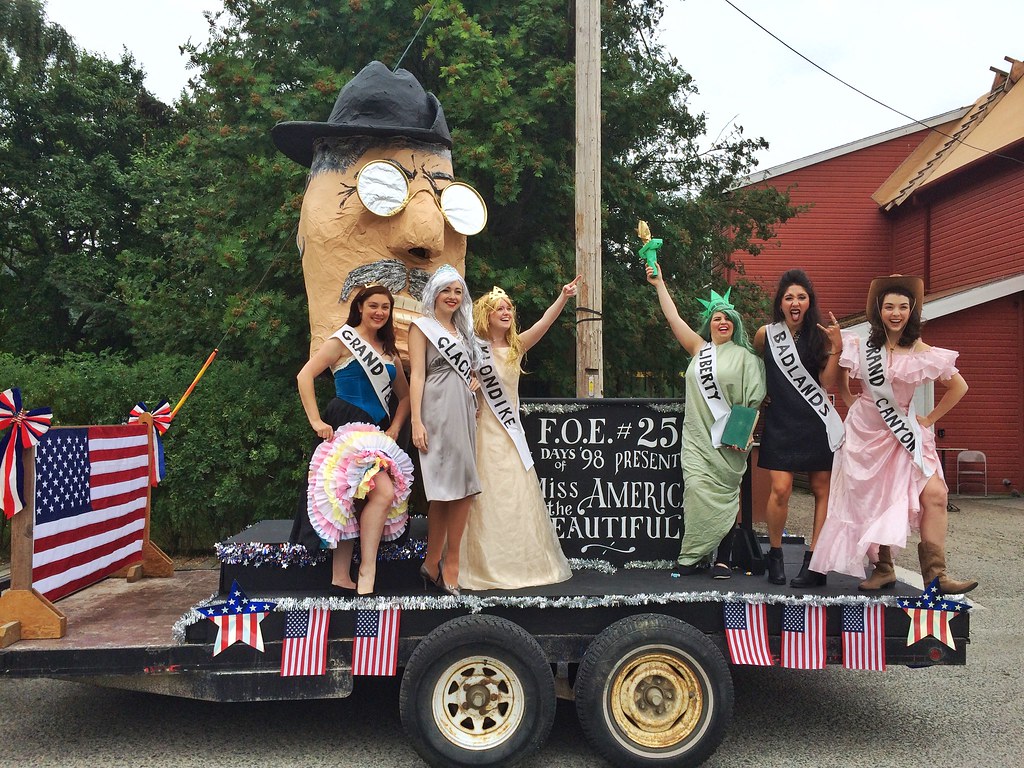 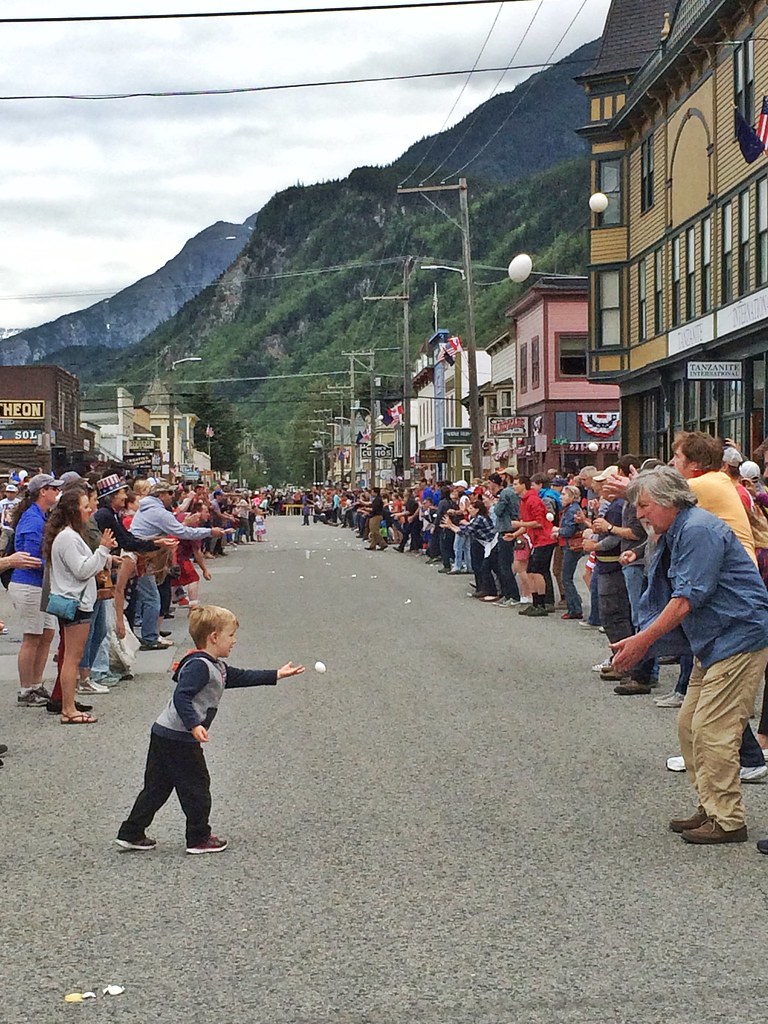 Eventually everyone had stepped back as far as they could go, right at the shop fronts along Broadway. The host asked all couples with an intact egg to come up to the main stage. So now there were about 20 couples and a huge gap between them, maybe about 15 meters. Then everyone on one side threw their eggs and the crowd was going wild. This distance was tough, and only 50 percent of the eggs were being successfully caught, the others were cracking and covering the road in raw egg. There were some superb misses, from a man totally falling over in an attempt to catch a short throw, to a lady catching one in her chest and it exploding all over her. Free entertainment doesn’t get better than this!! Oh wait…here comes Bob and Tom, of course they waited till everyone had thrown their eggs and there were no distractions, Tom positioned himself and began stretching his legs, he aimed the egg ahead of him as if he was aiming for bullseye in a dart competition, the crowd grew silent, he threw the egg and it flew in slow-motion through the sky past us and down towards Bob, but wait….it’s short…is it going to make it?? Bob launched forward, reached low and the egg slipped between his fingers ‘Oooooohhhh’ years of training down the pan as quick as that! A young couple won with a superb catch and walked away with the $100. Hooray! I should add that Skagway holds the world record for the most egg tossers, over 1000 people back in 2008, it’s pretty serious shit.

After all the egg excitement we headed down to the Red Onion Saloon who had an incredible duo outside jamming on a guitar and everything from spoons and a grater to enamel cups and a tambourine. The younger chap was dressed like an old prospector with a top hat, braces and cowboy boots, such a nice look. Their music was outstanding, we loved it and grabbed a beer in the make shift ‘beer garden’ basically just a fenced off area of the road where we remained trapped due to the strict no drinking in public rule. But we could enjoy the music and play Corn Hole where we threw bean bags into the wide mouth of a prostitute painted onto a wooden board. 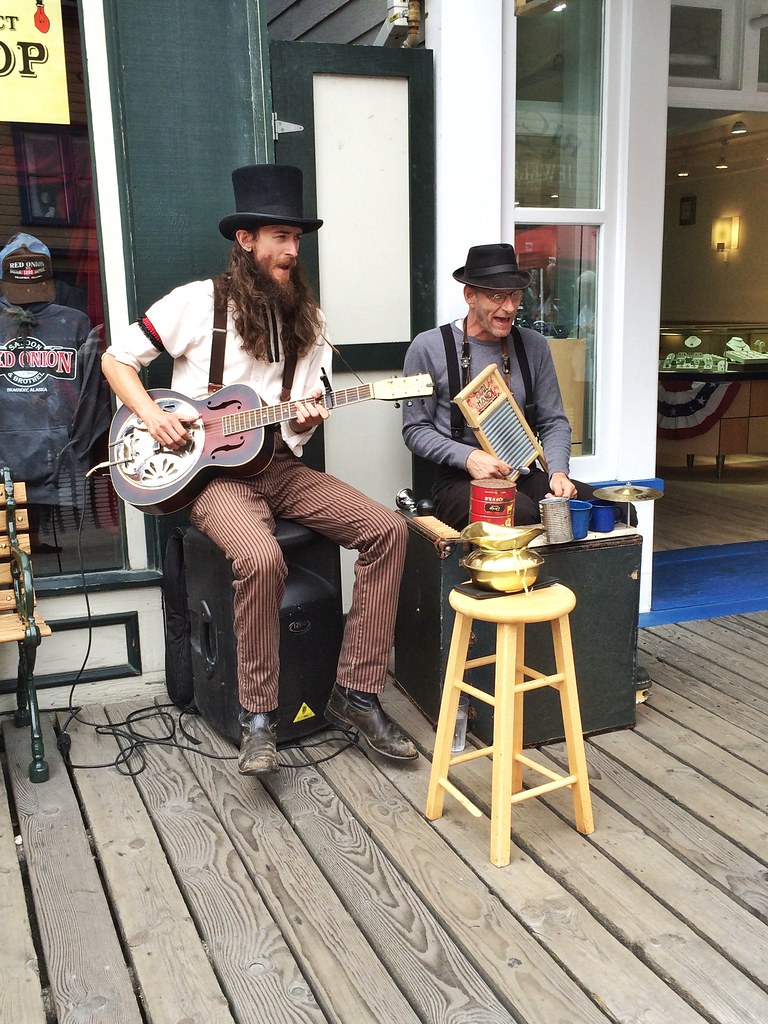 Another event I really wanted to see was the hot dog eating contest, now that is American!There were ten contestants, each with a nickname they’d given themselves like ‘Foot Long’. The reining champion was a thin 15 year old girl named ‘Weiner Women’ who beat all records last year by eating 10 hot dogs in 10 minutes, the crowd was vouching for her again. There was also an interesting international guest who called himself ‘Hot Shark’ no idea what relevance that had but he looked so out of place on stage like a little gangsta. I think the hosts also saw the humour in it all and decided to refer to him as ‘Sharky’. The countdown began and it all became a bit gross from the word ‘Go’. A lot of the contestants ate the dogs first which vanished down their throats in split seconds, they even ate two dogs at the same time while dunking the bun in their cup of water, squeezing the water out and shoving that down their throats too. Weiner women had a weird technique, she barely swallowed her food, she just shoved and chewed the hot dogs in and then burrowed them in her cheeks like a hamster. She then continued to shove dogs through the tiny o-shape gap in her mouth and chewed it like a rabbit attacking a carrot. Her eyes were watering and it looked imminent that she was going to throw up over the crowd. Sharkey was quite the contrast and was eating the hot dogs so casually, I think he just wanted a free meal and was savouring the flavour. 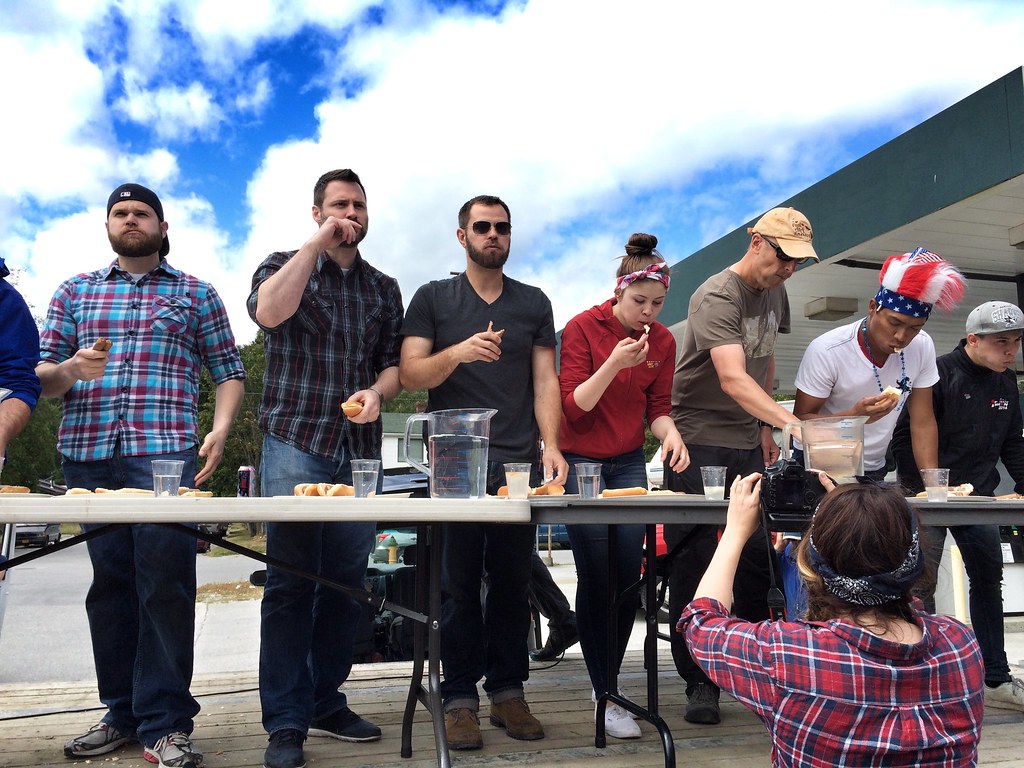 The contestants were finishing up their plate of five hot dogs and were asking for more…then the whole competition became very disorganised. Someone would get three dogs, another person just one and then the contestants were standing there with nothing in front of them and it quickly became evident that there wasn’t enough hot dogs!! The cowboy host informed the crowd that it might just be the first hot dog competition to run out of hot dogs. How awkward. Everyone started booing and they made an impromptu decision with three minutes still remaining to pick the top three contestants. They were each given two hot dogs and before the race commenced again the hosts decided to ask the finalists how they trained for such an occasion. There were all sorts of wiener innuendos being thrown about which had us in hysterics. In the end the Bison-ater won while Wiener Women had everything off her plate but all mashed up in her cheeks. It was a very entertaining contest! We spent the rest of the afternoon listening to very American live music; “Born in the USA…” What a classic! Our first Independence Day and what a great place to spend it.