It was my 27th birthday and another new country to celebrate it in. So far I’ve had my birthday on an island in Thailand, in Toronto where Craig made me a cake and dropped it face down on the floor as he presented it to me, a cancelled flight due to the volcano smoke meant an extended stay exploring Buenos Aires in Argentina with an old friend, a cold winters day in New Zealand’s Alps where Craig managed to present a complete cake to me, hiking on precarious ledges in Norway and now two countries in one day! 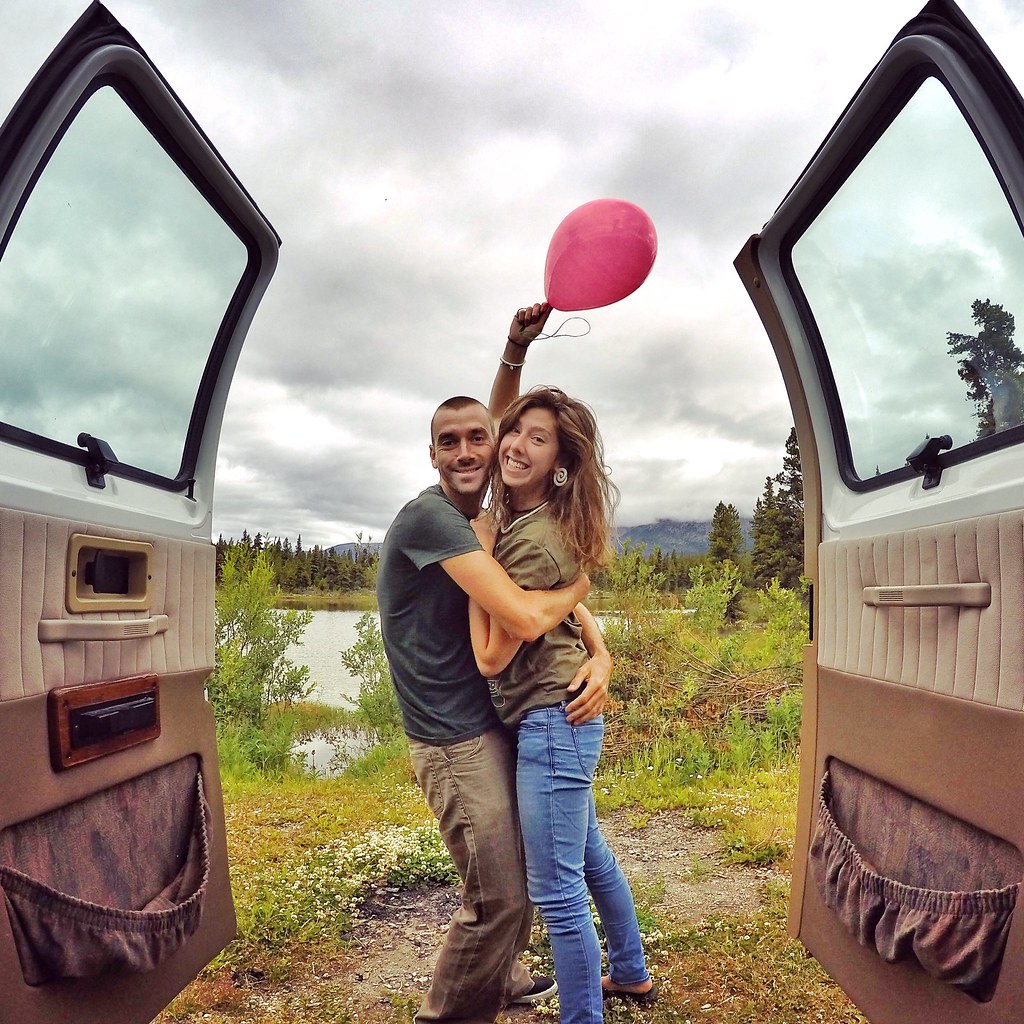 It was actually cloudy for my birthday, July the 3rd is supposed to be nice and sunny, but nevermind. We hit the road and climbed up a pass to a plateau dotted with lakes and rocky ledges. We exited Canada and drove steeply downhill through a gorgeous forested valley to the US customs. Mr grumpy at the border confiscated our Chilean apples and let us continue on our way to Skagway, our final destination in Alaska. Skagway became a boom town in the Gold Rush days around 1898 with 40,000 stampeders jumping off ships at Alaska’s closest port to the gold mines in Dawson City, Yukon. Skagway went from a collection of ram shackle tented shops to a Main Street with wooden buildings and boardwalks in just four months. It had 80 saloons, three brewery’s and numerous brothels. From Skagway the prospectors could take the White Pass Trail or the Chilkoot Trail; on them they’d have a years worth of supplies and it would take three months just to cross the mountains to the interior from where they’d wait out the winter by frozen lakes and over 7000 boats were made to take them north. Skagway was basically a town of seduction, a place for men to gamble, drink and have their way before their mammoth journey. The gold rush only lasted a few years and thanks to Skagway building a engineering marvel of a railway line, it remained a popular destination after the boom. Its rival city, Dyea, just 10 miles away hadn’t made their train line quick enough, an avalanche took many lives and the town soon dwindled to a ghost town. Today Skagway is beautifully preserved and still feels like a boom town thanks to the thousands of daily visitors that arrive via cruise ships. Dyea is a complete contrast with no buildings, just rubble, wilderness and the odd bear. Both are set in the gorgeous Lynn Canal area with dramatic mountains all around. 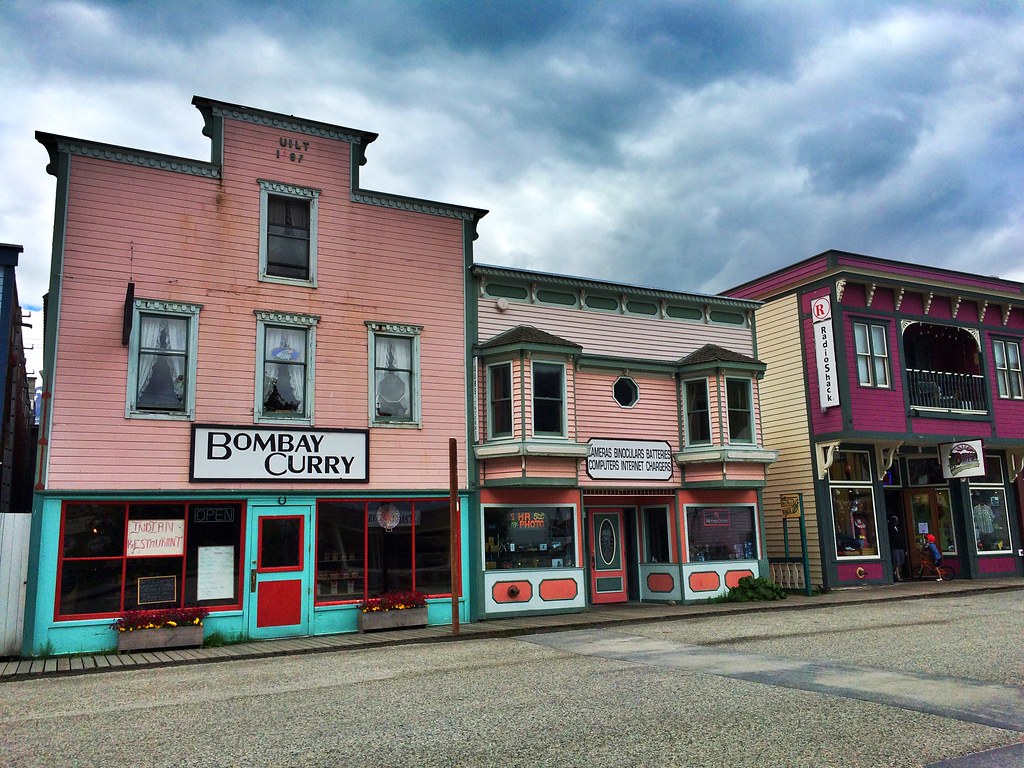 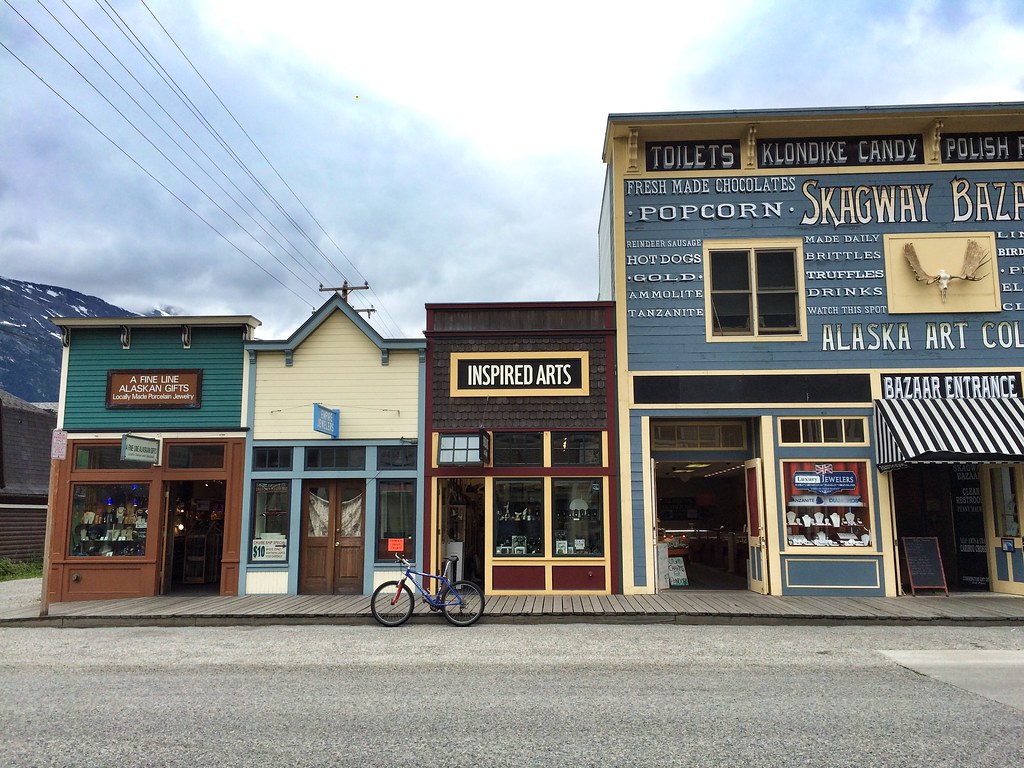 Thankfully when we arrived it was a particularly quiet day and we could walk around the peaceful streets admiring the wooden buildings along Broadway Street. The town was set in a deep valley with barely any flat ground so was only 3-4 blocks wide but 23 blocks long. After exploring the town we strolled around Lower Dewey Lake whose path was tangled with roots and a bit of a bitch to walk along. As it was my birthday we treated ourselves to a lovely meal out in the local brewery. It was a proper American bar and the waiter came up to us with such enthusiasm “what can I get for you party people?” We enjoyed a couple of delicious beers and good food before heading down the Broadway Street to check out the beginning of the independence day festivities. The street dance didn’t seem to be very happening so we warmed up in Daphne, played cards, had a hot chocolate (living up to our party people nickname!!) and waited till 11pm when a firework display was due to start. Skagway seemed to be on island time as the fireworks were about 30 minutes late and it was bitterly cold waiting on the windy waterfront. There was some bizarre noises coming from our left and we looked around to see two women crawling along a very slanted roof like escaping convicts. They were actually trying to get a good vantage point for the fireworks but it was pretty funny watching them trying to sit and look comfy while desperately gripping onto the roof with their hands so they didn’t slide down. The sky wasn’t exactly dark but it was as good as it gets for fireworks at this time of year. Eventually they began at the end of a long pier, there was absolutely no system to them, it was like someone had dropped the box, mixed them all up and just lit them all. Each eruption of light reflected in the water and lit up the mountain backdrop. Craig and I pretended that the fireworks were specifically for my birthday, it wasn’t the 4th yet! 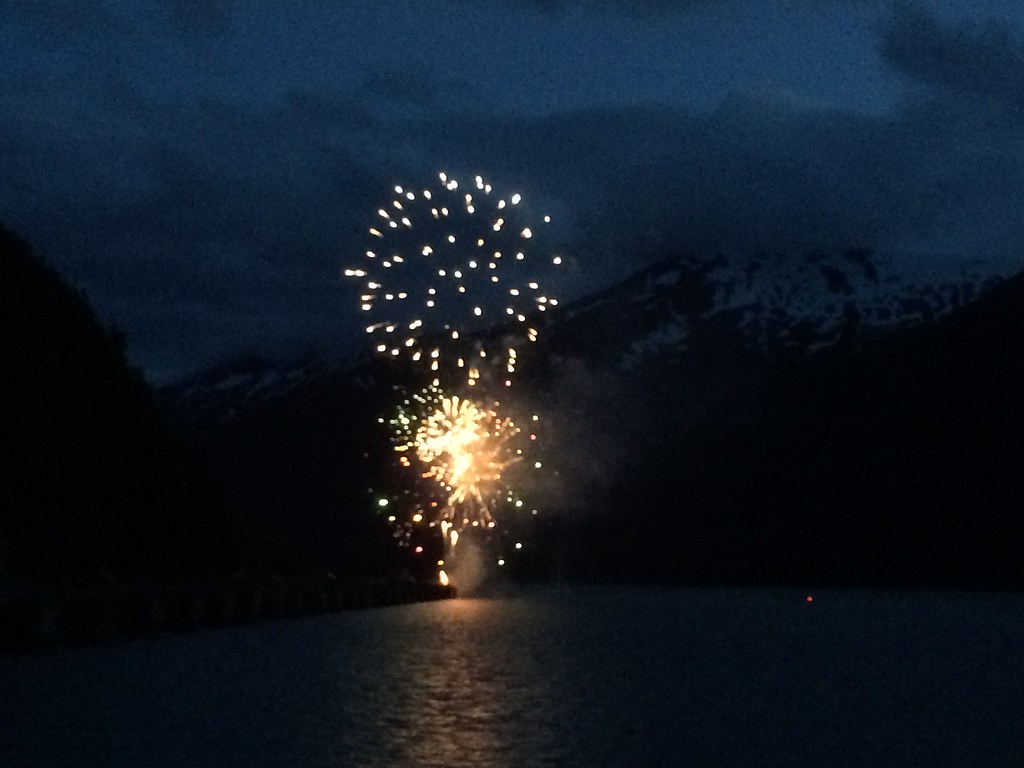