It was sunny everyday while we were stuck in Whitehorse but the day we left the heavens opened and it poured with rain. God damn! We were happy to be back on the road though and detoured south on the Klondike Highway to explore a little of south eastern Alaska. The storm passed and did a tag team with the sun just in time for our stop at Emerald Lake, and what a beautiful lake it was. The sun was sliding in and out of cloud but even still the lake looked amazing and was throwing out some insane turquoise hues. We climbed the hill opposite the lake for better views and sat watching the sun and cloud change the patterns on the lake like on a mood ring. Later on I re-climbed the hill on my own as a big patch of blue opened up in the sky. I took more photos and noticed a path leading right for a glimpse of Spirit Lake on the other side of the highway. I whistled a song to notify any Bears of my presence, it certainly felt a lot eerier walking on my own. As I wandered along the trail I stepped on something soft and looked down to see my foot in bear poop. I quickly did a 360 degree spin around to check there were no Bears in close proximity and headed back to Daphne to tell Craig about the 10minute adventure I’d had. 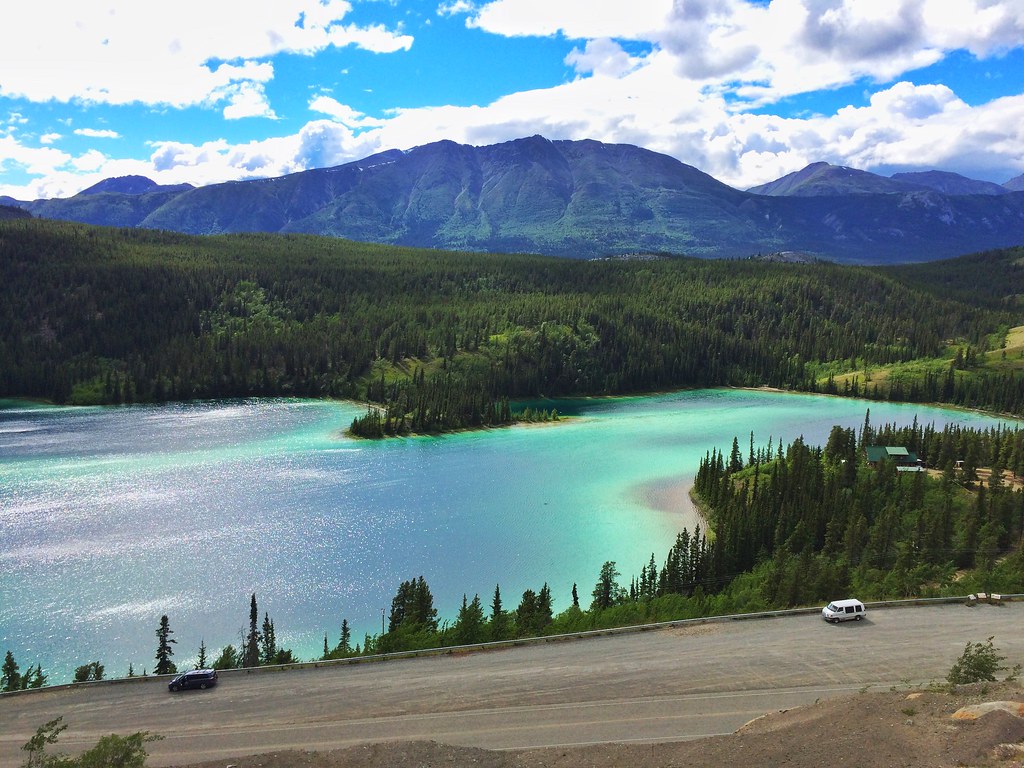 We wanted to camp beside the lake but the spot we found was too slanted to sleep on so we settled for a really peaceful place in the woods around the lake. It felt so good being back in the wilderness after a few nights in the city. We enjoyed a campfire under the midnight sun, ate a ton of marshmallows and were amazed that we could sit outside in peace, without the buzz of the flies, the bite of the mosquitos and the swatting of the horse flies. 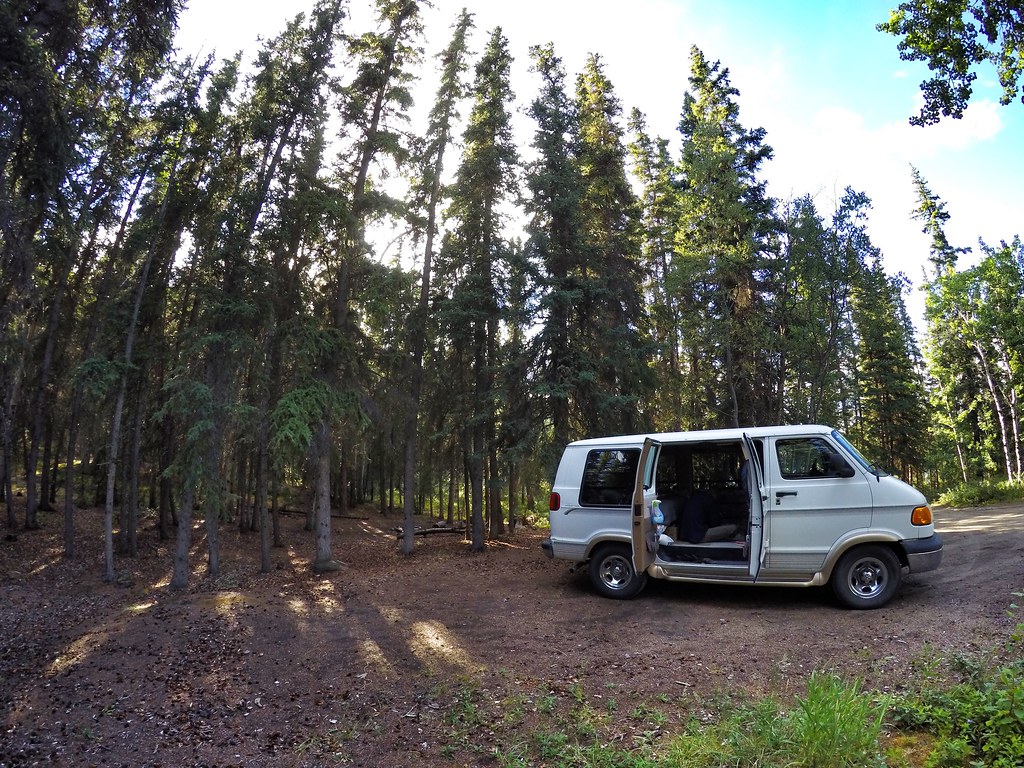 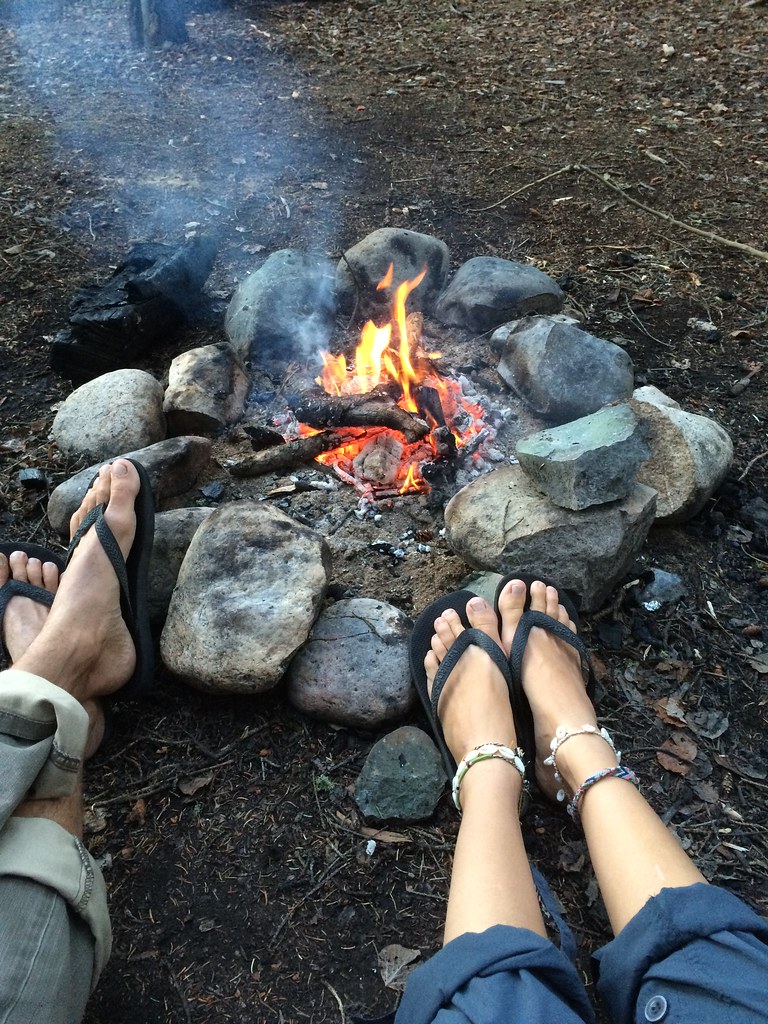 We enjoyed breakfast back at Emerald Lake before continuing south to another popular attraction along the road, The Carcross Desert, aka the worlds smallest desert! We took our flip flops off and walked amongst the sand dunes which were dotted with pine trees and backed with mountain views, what a bizarre little place. 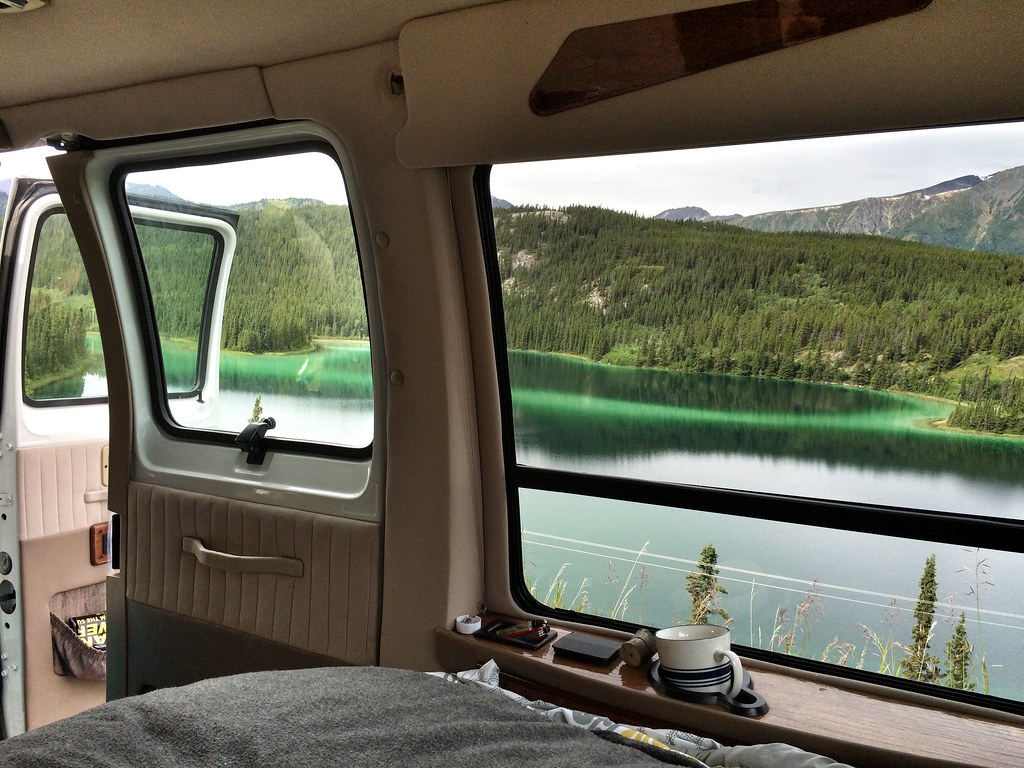 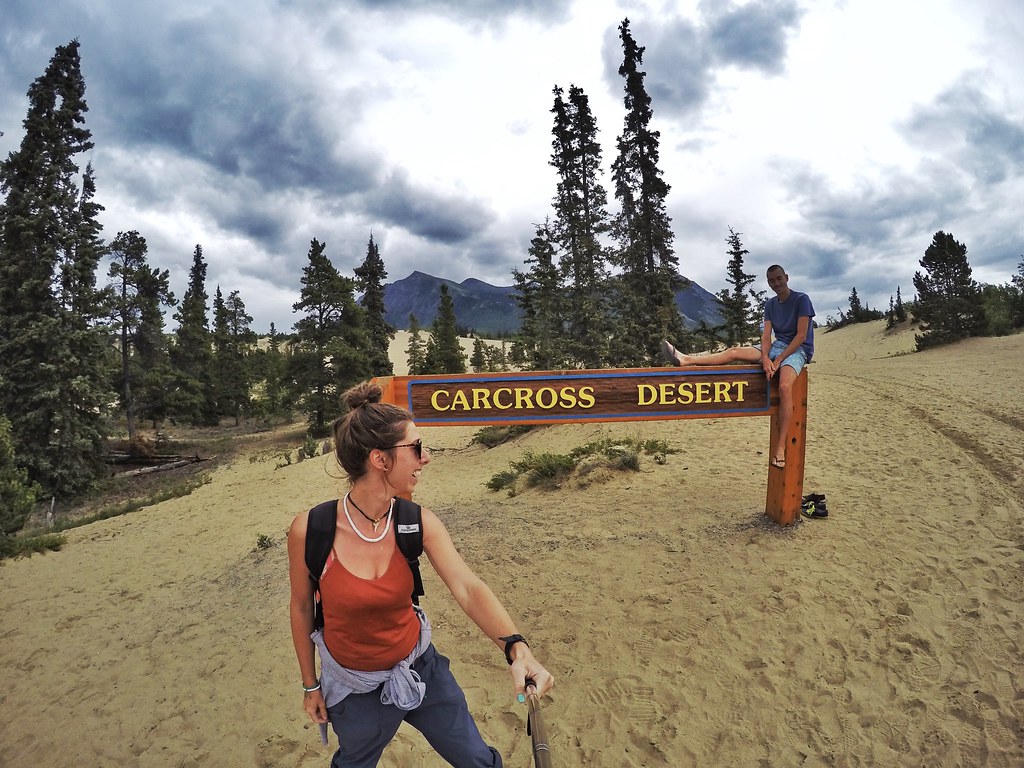 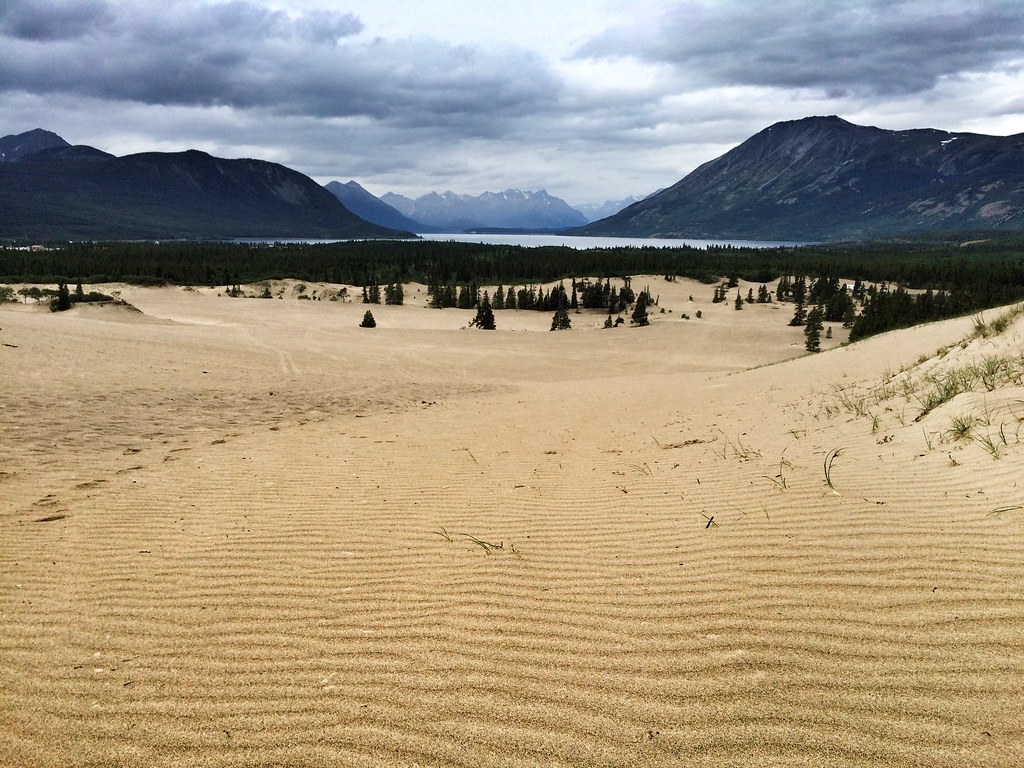 Carcross village was just a couple kilometres down the road. It’s name has been shortened from its original, ‘Caribou Crossing’ due to the herds of caribou that migrate through the area. The village was heaving when we arrived, there were people everywhere, full car parks and big tour buses. It was Canada Day but we didn’t expect such a small village to get so busy. The steam train was doing special trips for Canada day and the Canadian Mounted Police were in their wonderful red uniforms, swaying the Maple Leaf flag and happily posing with everyone. Afterwards we wandered around the cute village and admired the lovely historic buildings, the nicest of which was the Matthew Watson’s General Store which had a flat wooden facade and was painted candy pink. There was also a modern area of quirky cafes and shops all painted in bright native art and carved totem poles. The village was a lovely mix of old meets new. 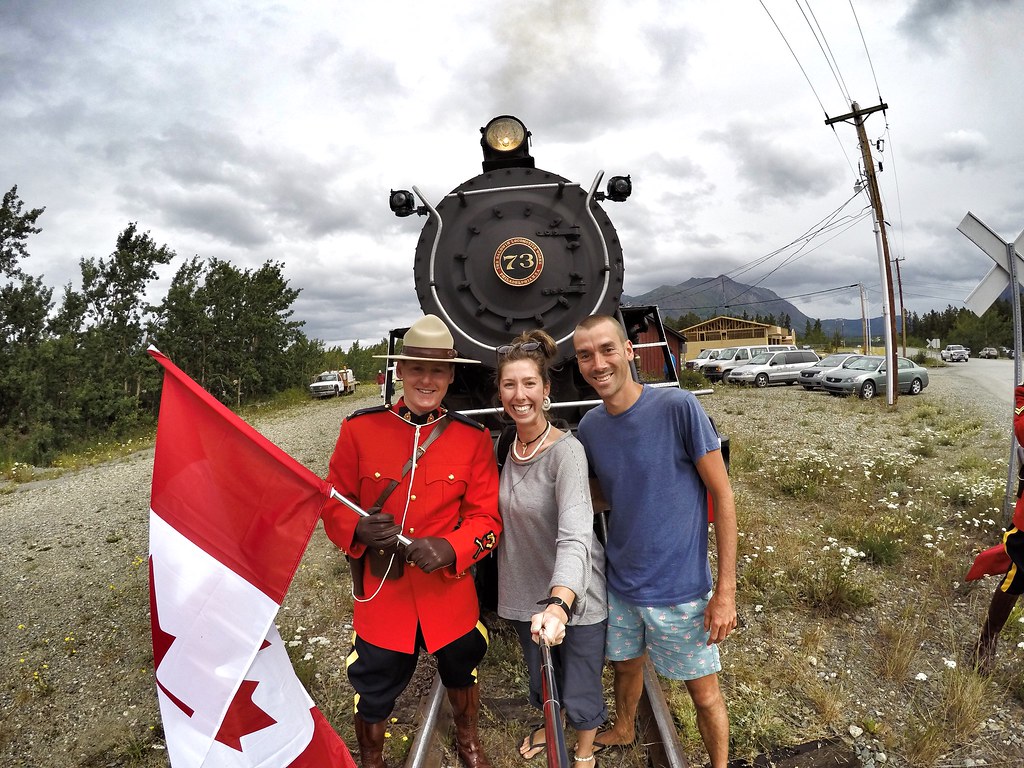 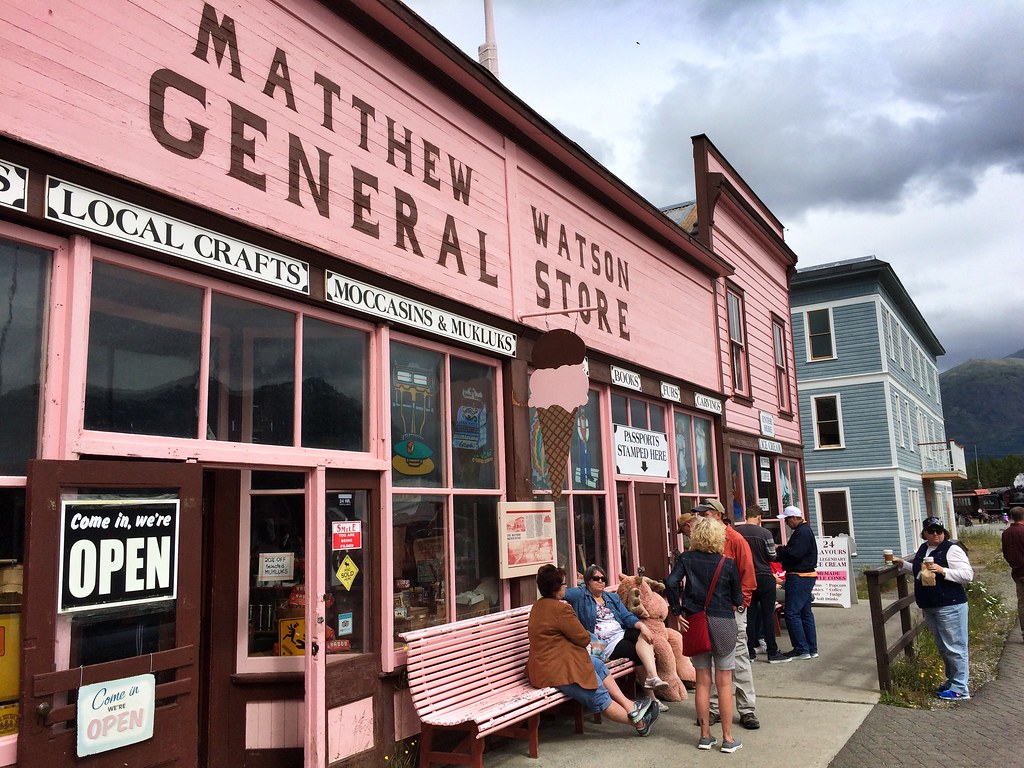 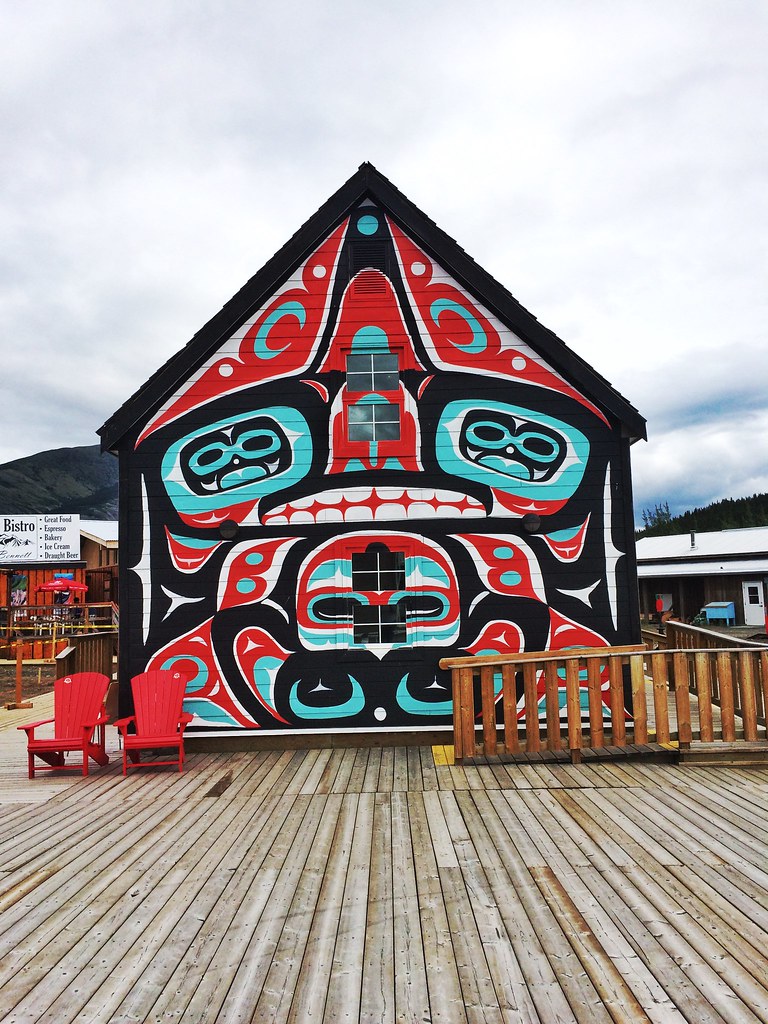 Daphne’s had a fuel smell that’s been bothering us lately so we finally took a look and did some troubleshooting online. It soon became obvious that it was the fuel injector leaking but there was no mechanics in town and it was a holiday weekend. It seemed like a fix Craig could do himself and we decided it was safer to drive back to Whitehorse and fix her before going to Skagway. It could of gone really tits up if they didn’t have the parts in town or if Craig couldn’t fix it, we’d be stuck in Whitehorse for my birthday and it would of been pretty shite. But Craig did a great job and we were back on the road again. It all turned out well in the end as we spotted a black bear on our way back south. We pulled over and watched the cutie as it waddled through the shrubs besides us. It even stopped, arched it’s back, lifted its tail and did a big berry poop while looking at us and licking his lips!! Mr bear continued heading parallel to us up a barren hill side where he stood out like a sore thumb and then back into the overgrowth. We waited further up along a dirt track and it took a while but suddenly the bear was just 3 meters in front of us and started chewing a log. After that he moved away a bit and continued on his journey. Wahoo! 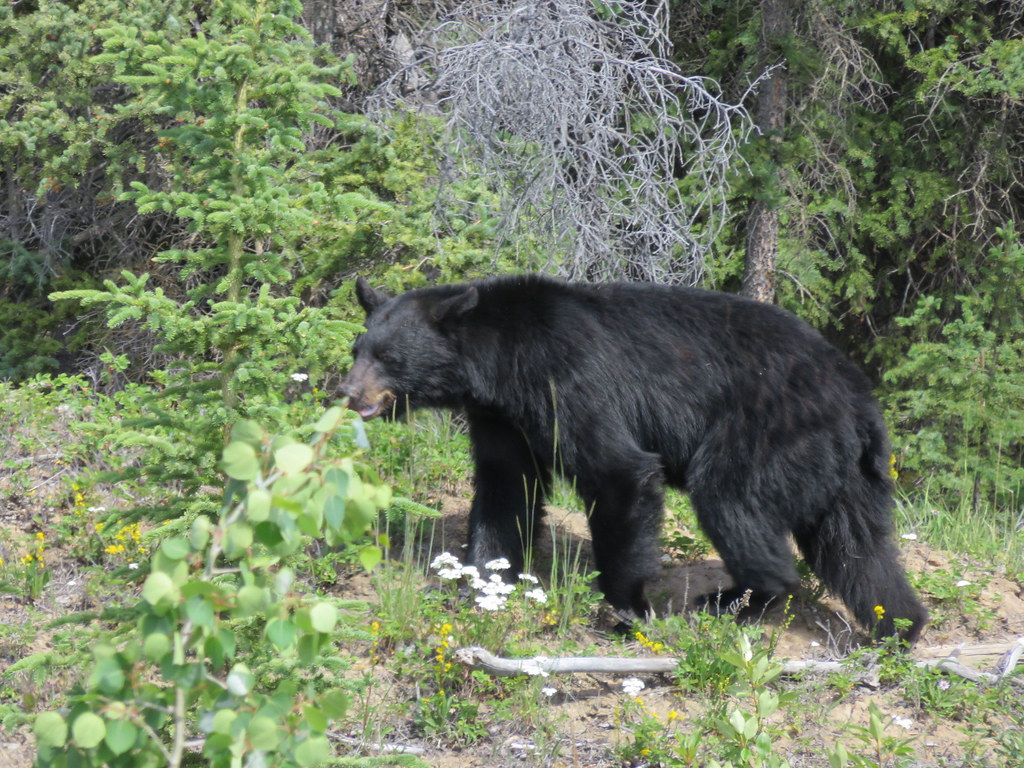 After the bear encounter we passed Emerald Lake again and it looked incredible, with the blue skies and gentle winds the colours were better than ever. We even found a route down to the lakes edge and had a brief swim. It wasn’t actually as idyllic to swim in as we’d hoped; the ground all disturbed as we stepped on it and the water was really cold, such a shame as it looked like paradise. 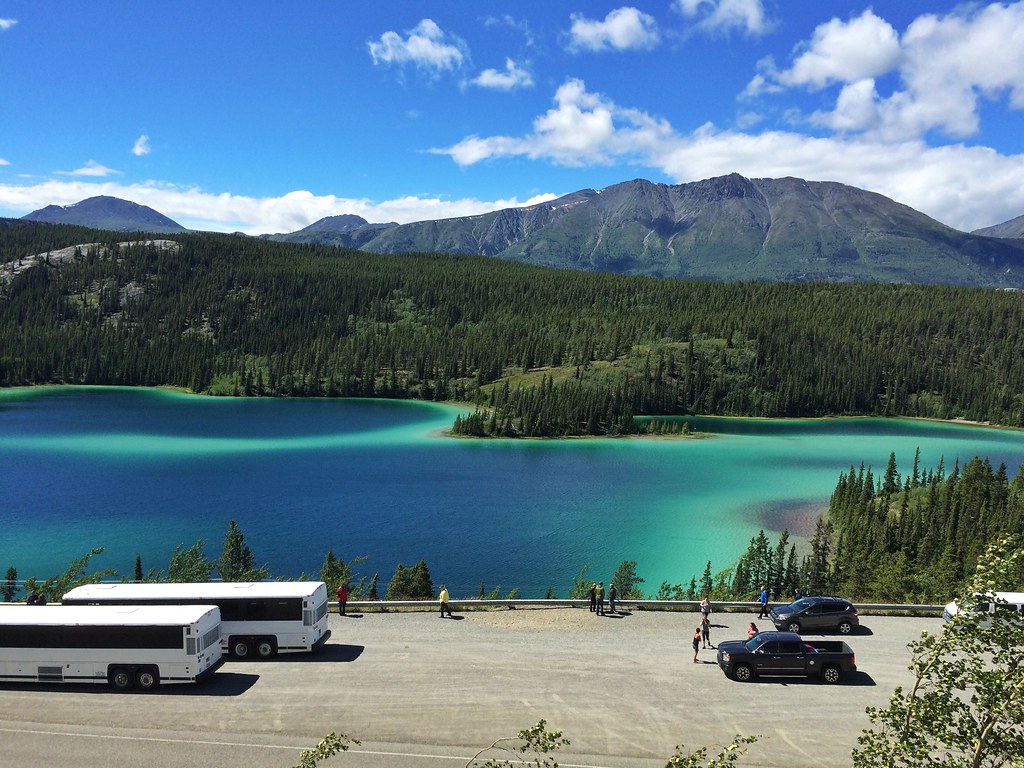 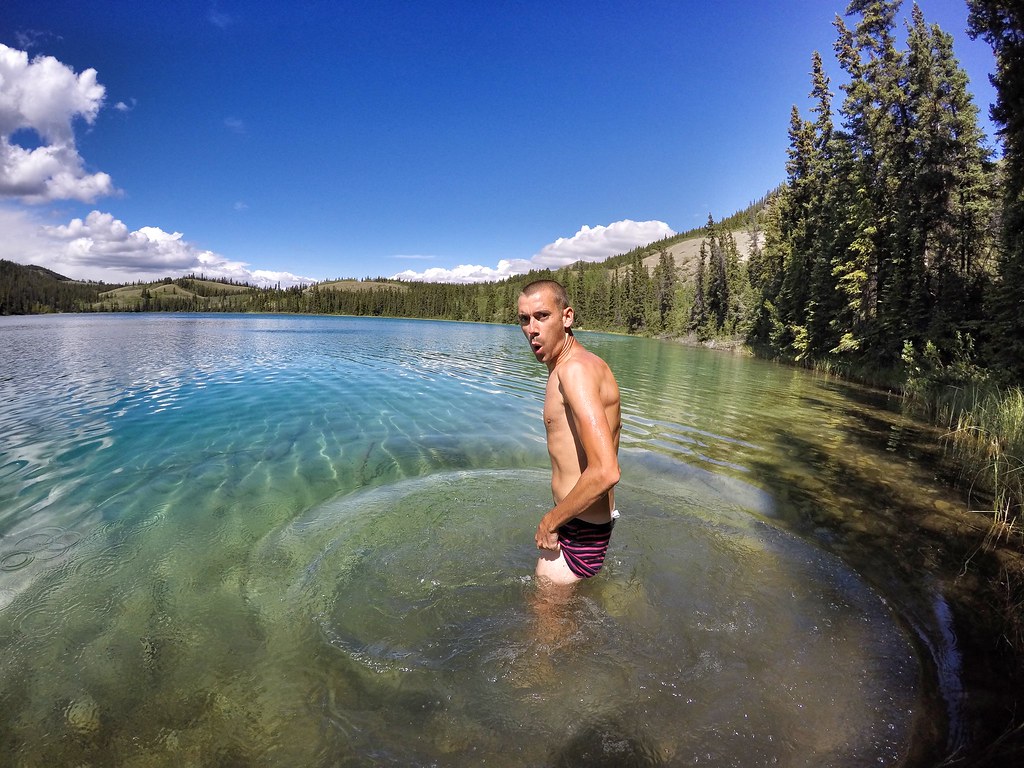 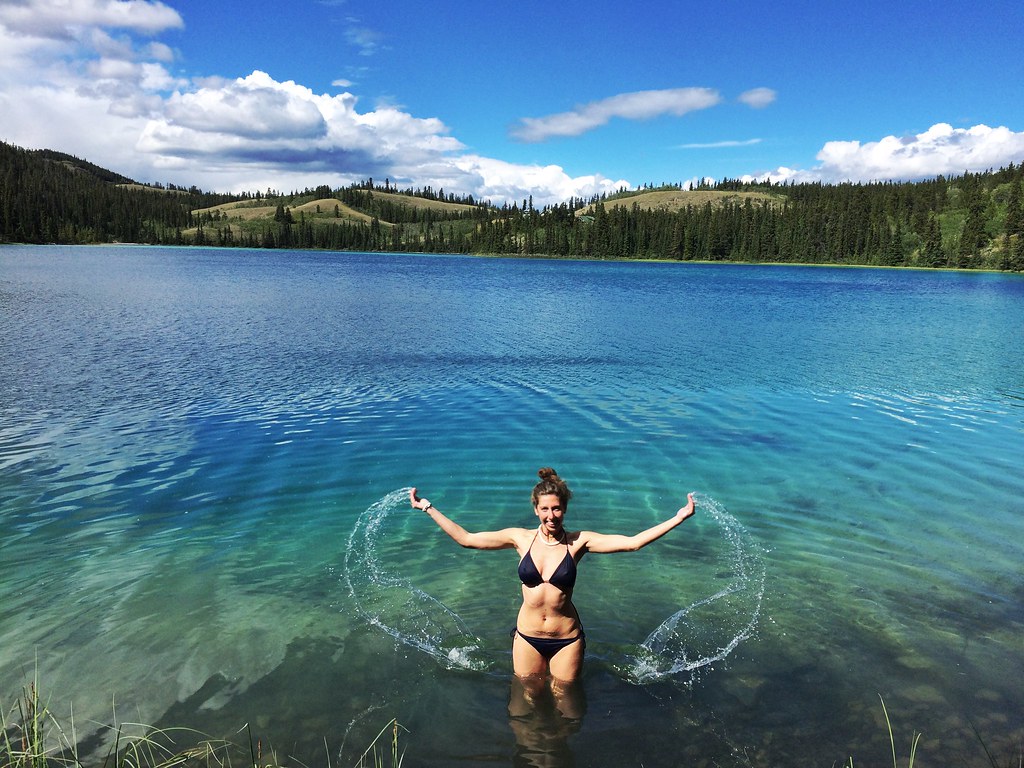 The route south of Carcross was one amazing roadtrip and we cruised alongside numerous stunning lakes. Mountains gradually got bigger and better and we crossed the border from Yukon into British Columbia. We were ready to pull up for the night and found a nice spot but couldn’t get flat so continued on and thank god we did as we came across another bear!! This time it was a very small, dark, brown bear, but it may of even been a light coloured black bear! It must’ve only been three years old or so and was happy waddling alongside us and lifting up rocks looking for bugs to eat, it even made a rock roll down to the road side. 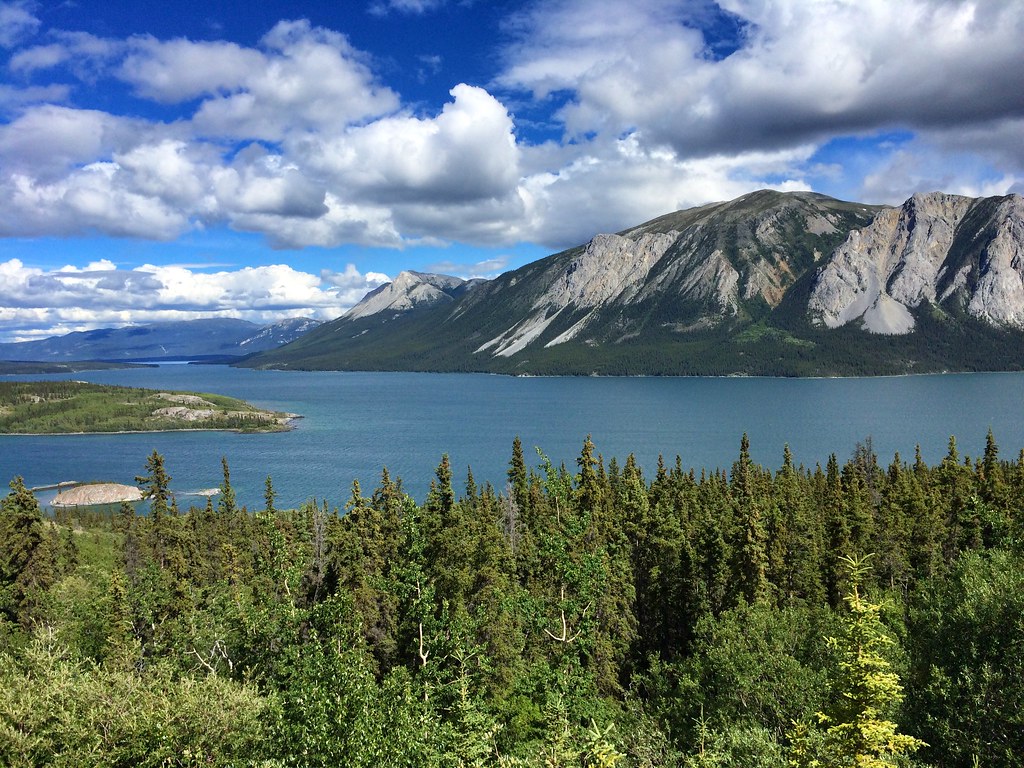 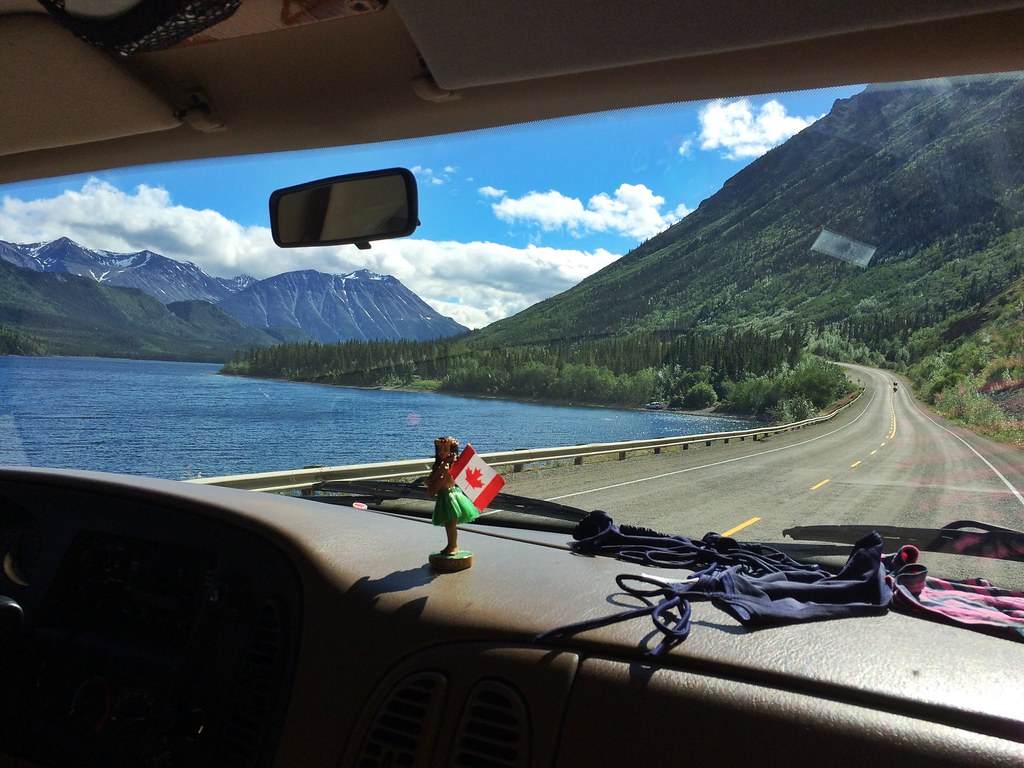 We decided to camp just 100 meters from where we last saw the bear and had a lovely spot beside a lake. We didn’t want to look away incase we missed it walking past but had to crack on with dinner. Later in the evening a car went past reaaaaally slowly, we looked back and saw two more cars had stopped and then a black bear crossed the road just 30 meters behind us!! I wonder how many other bears have walked past us and we’ve been blissfully unaware. Three bears in one day, how bloody awesome is that!! 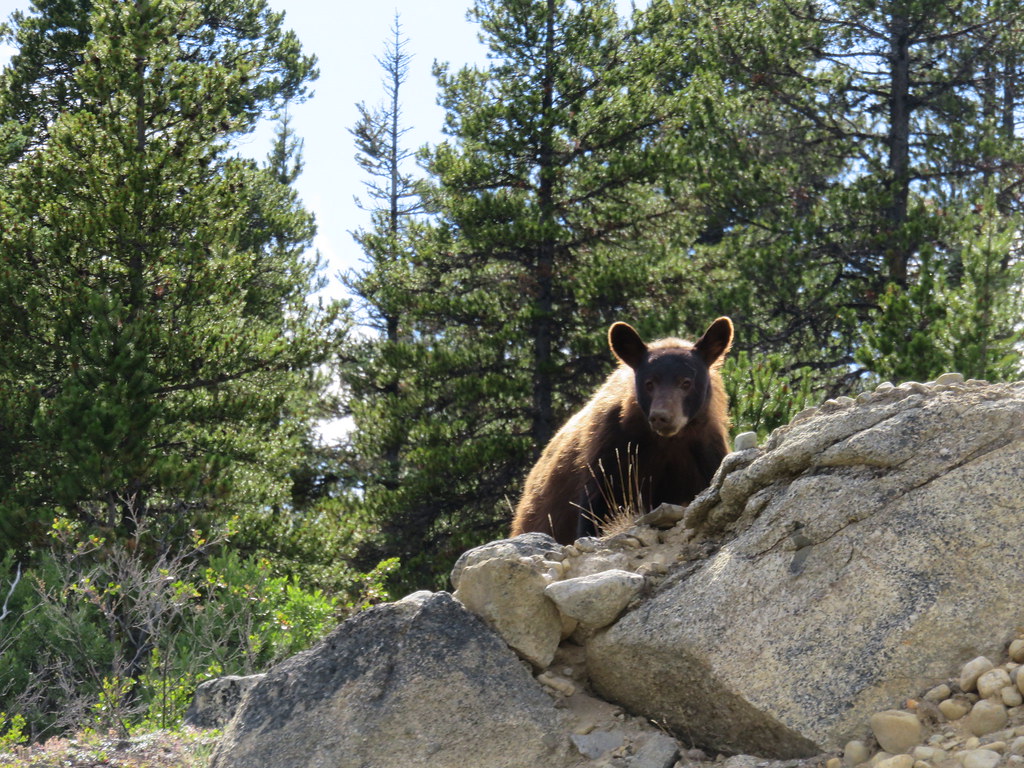 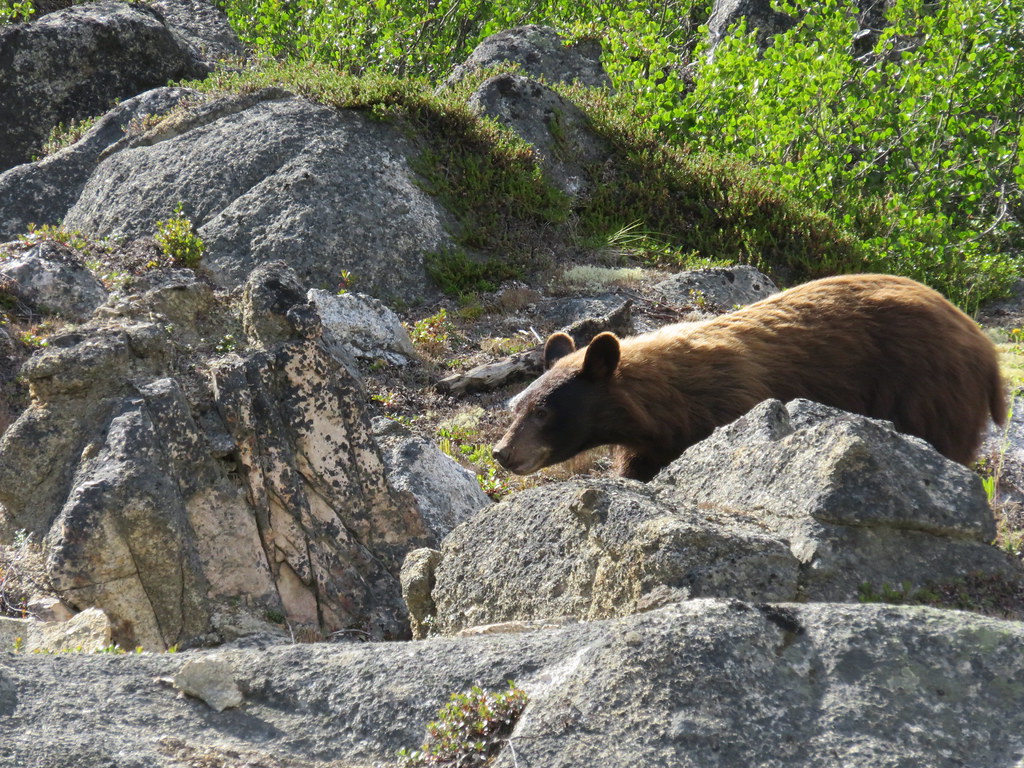