We are slowly grasping how wild Alaska is after nearly two months here. A 100-200 mile drive along a main highway might not pass a single village, let alone a roadside letterbox. Every viewpoint we get to amazes us, how can one state be so wild, remote and undeveloped. There’s nothing but trees, mountains, rivers, meadows and lakes for hundreds of miles and we absolutely love it but at the same time it can be tough out here, and with Daphne the van needing issues fixed we feel even more in the sticks. One lady we met does just one big food shop a year. It’s a six hour return trip to the big supermarket, she fills a few trolleys and for the rest of the year she lives off the land. Not only does she grow her own vegetables but she also eats locally hunted caribou and moose and freshly caught salmon. Another lady we met has an 8 hour return trip to a big supermarket and does that four times a year. When I asked her what winter was like she mentioned figures that I couldn’t even comprehend, “well when it gets to -60 to -80….” That’s just insane!!! I asked if they wore big snow suits and she was very excited to tell me about the winter attire but to be honest I lost track of how many layers she put on. Apparently everyone looks like Michelin man here in winter. 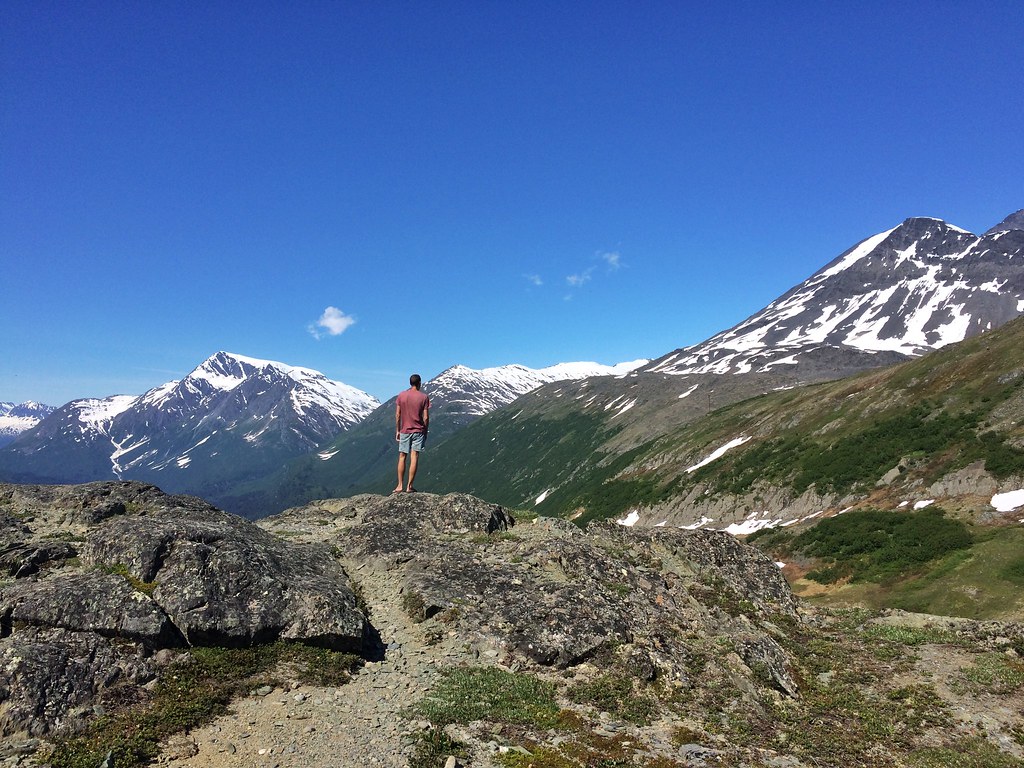 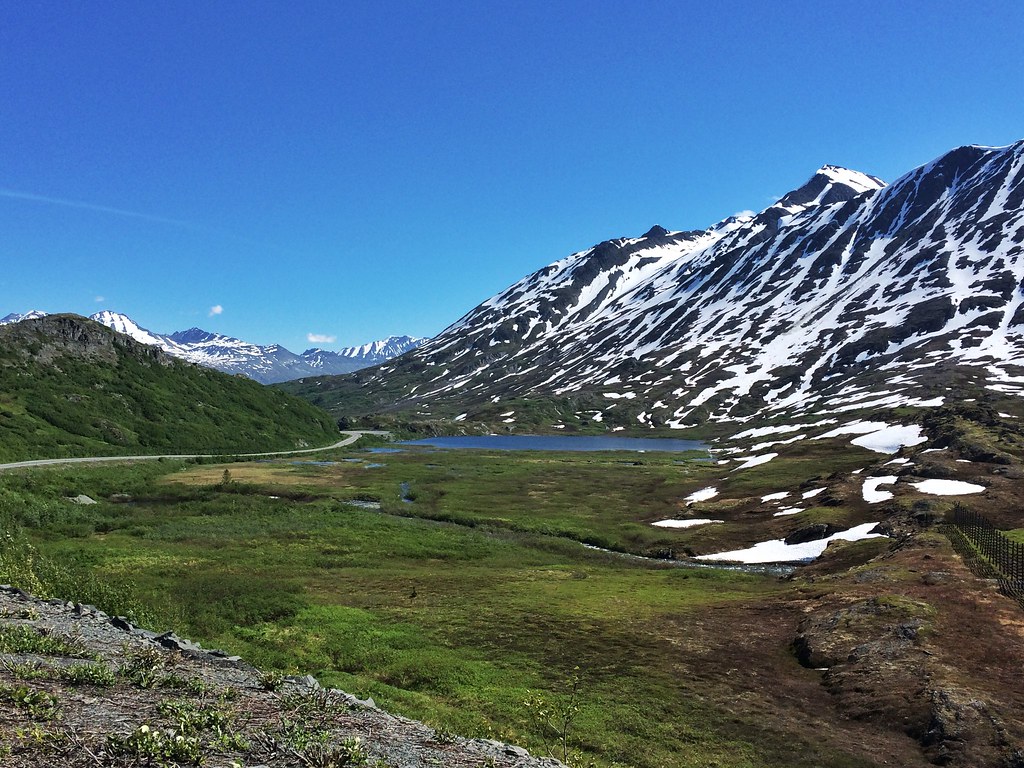 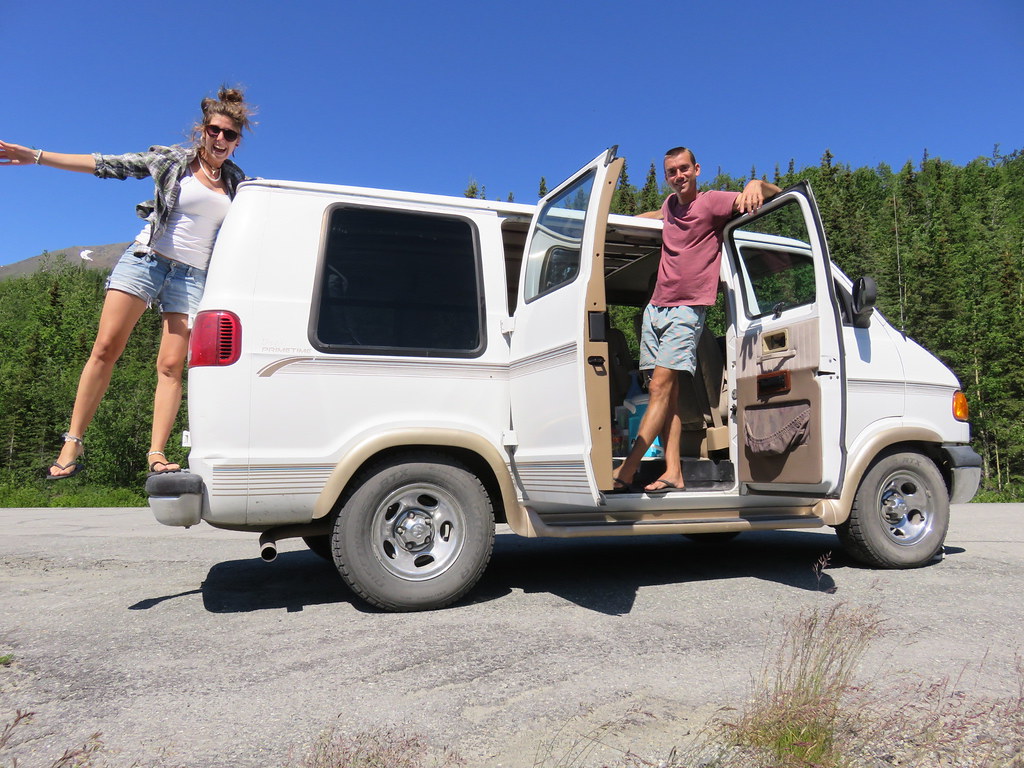 The last ‘big city’ we were in was Fairbanks about three weeks ago. Since then it’s been blink and you’ll miss it villages. We haven’t been having much luck after the mechanic in Valdez ordered us the wrong parts and then sent us to Glennallen 150 miles north promising they could see to us the next day. Well, they couldn’t and we had to wait four long days for the parts to arrive. On the plus side we saw two beavers and some rare cloud formation where the sky looked like bubbles. The garage fixed Daphne’s steering rod but didn’t tell us till afterwards that they couldn’t align our wheels there which meant driving 150 miles to the next garage at Tok. 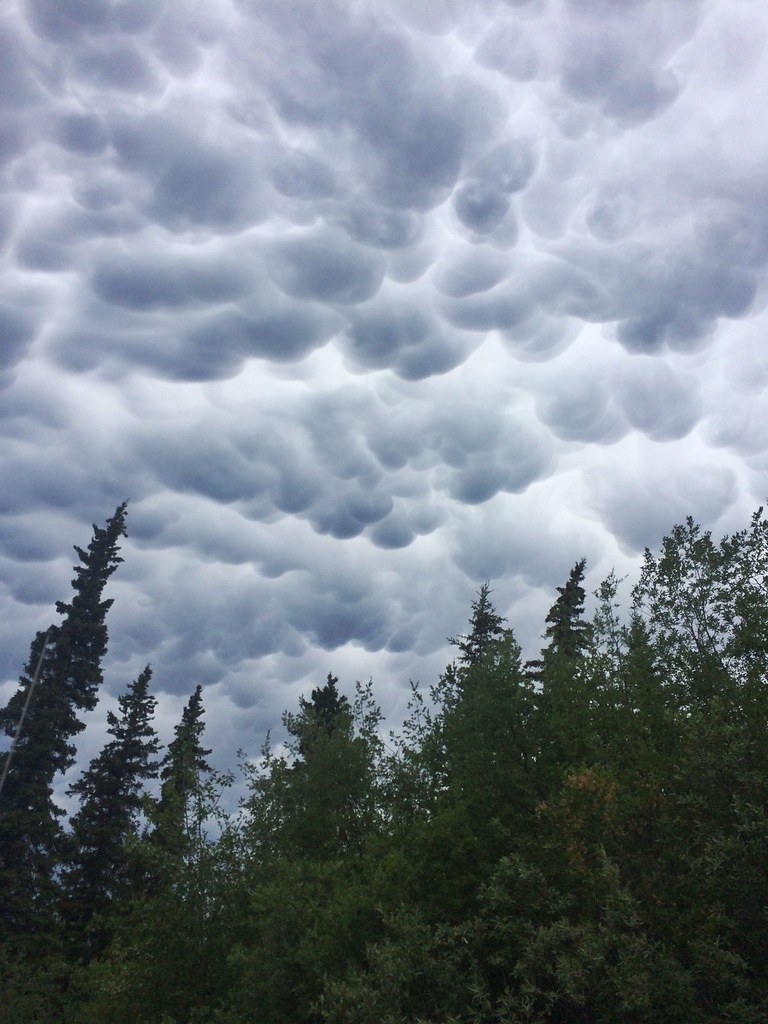 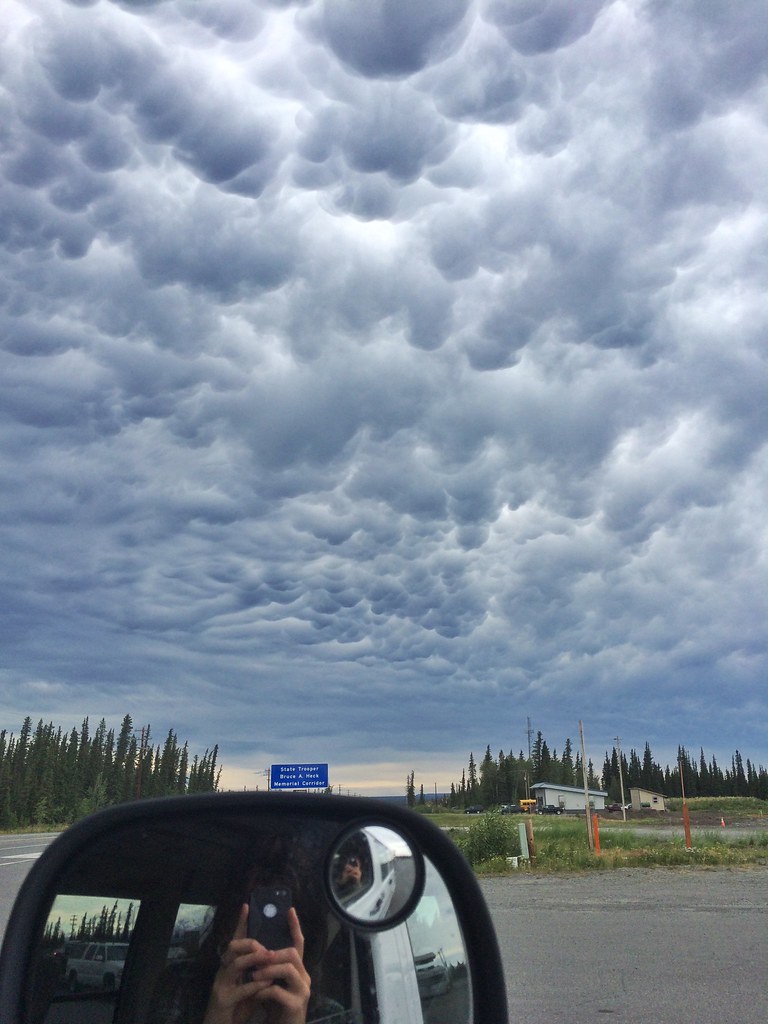 Tok was the final straw for us. It was another grumpy mechanics and the young lad couldn’t give us a quote for a wheel alignment. Not even a ball park figure. Everyone we’ve spoken to has said it costs between $60-80. Well they did the job in less than 45 minutes and charged us $110!!! When we questioned the manager he said that was the normal price they charged for a wheel alignment. Needless to say we were furious as we were refused a quote to start with and then charged over the odds. I get that it’s a small town and prices are more but I doubt they’d charge a local that price. The past three mechanics have left a very sour taste in our mouths but at least Daphne was back to her best and we could continue on our adventure. 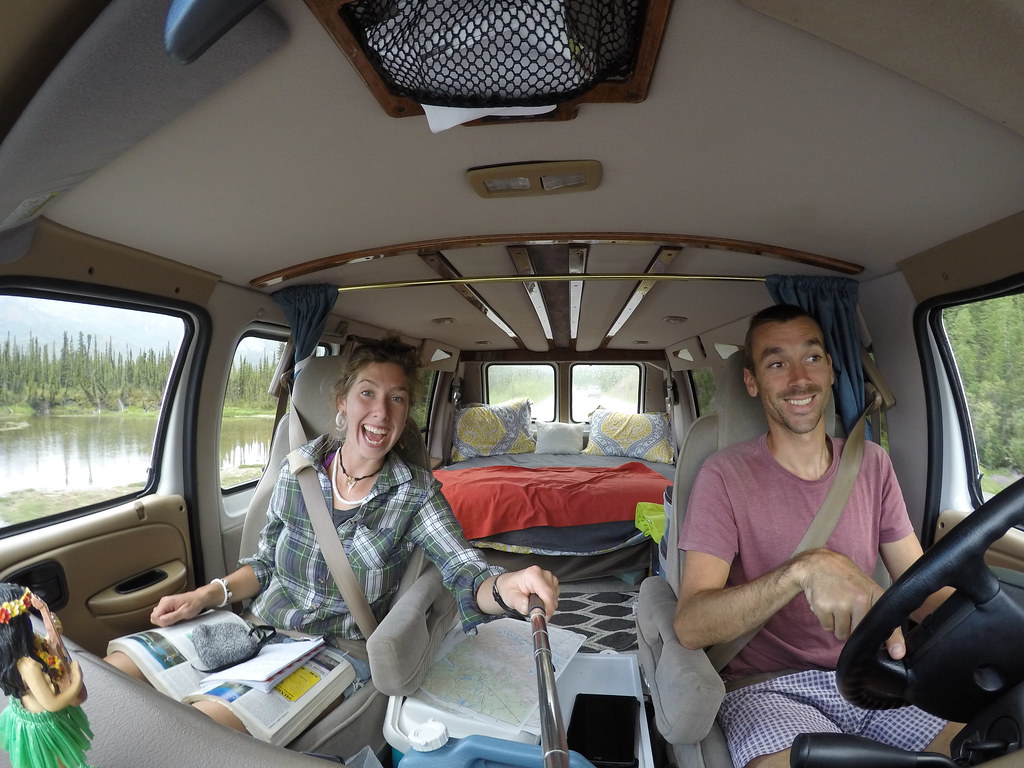 We headed east towards the Canadian border and were over the moon to be back on the road. We wanted to stop en route and ask the US immigration if it was ok to use our current ESTA to exit and re-enter southeastern Alaska but our road went around the building and continued on. So we pulled up on the shoulder and I walked down to the queue of RV’s waiting to be granted entry. The sign indicated that pedestrians, cars and RV’s should be in the left lane. I didn’t know if I should queue behind the cars or overtake everyone and jump to the front. So I opted to go ahead but reached lots of big signs, ‘STOP! Do not enter until told to’ along with cctv cameras pointing at me from every angle. So I waited behind the first RV as if I was a car in the queue. It was pretty awkward just standing there twiddling my thumbs and I got the urge to brighten up the guards day….imagine if the RV pulled off and I ‘pulled up’ at the booth and pretending to be sat down in an imaginary car and wind down the window!! Oh how hilarious would that be! Luckily I didn’t as the man was rather grumpy (the theme of the day!!) and suspicious about where I’d come from. Then I started muddling up my words and ended up saying I was leaving Canada instead of Alaska – how embarrassing. So I wound up my window, started beeping and reversed out of his booth. 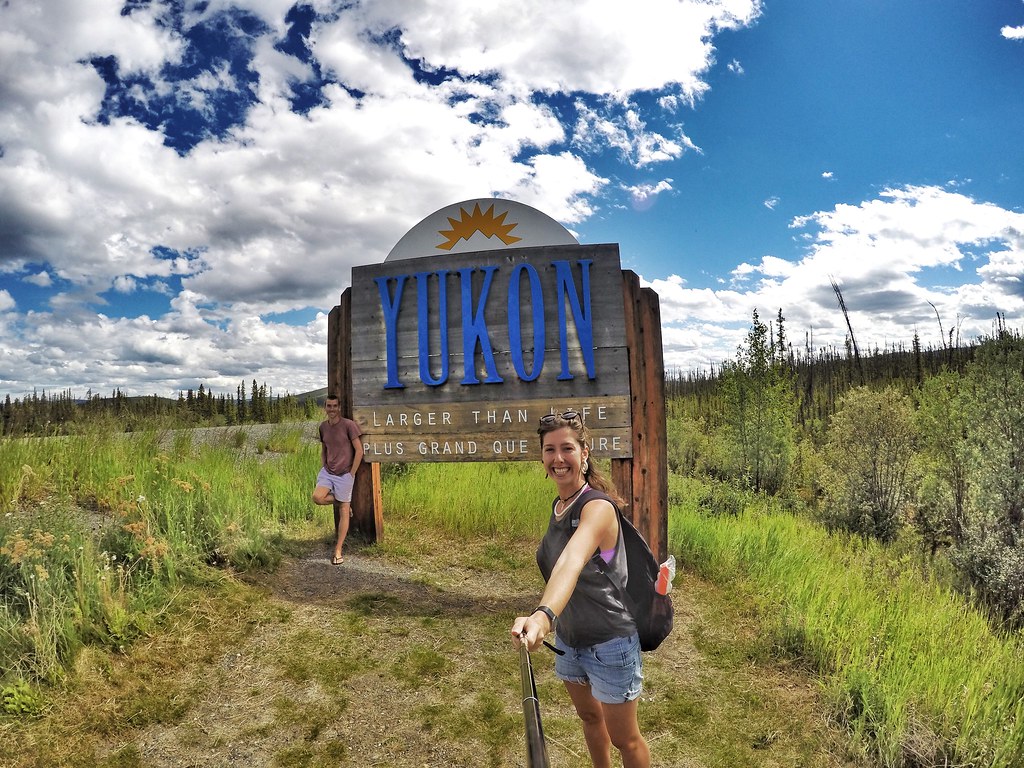 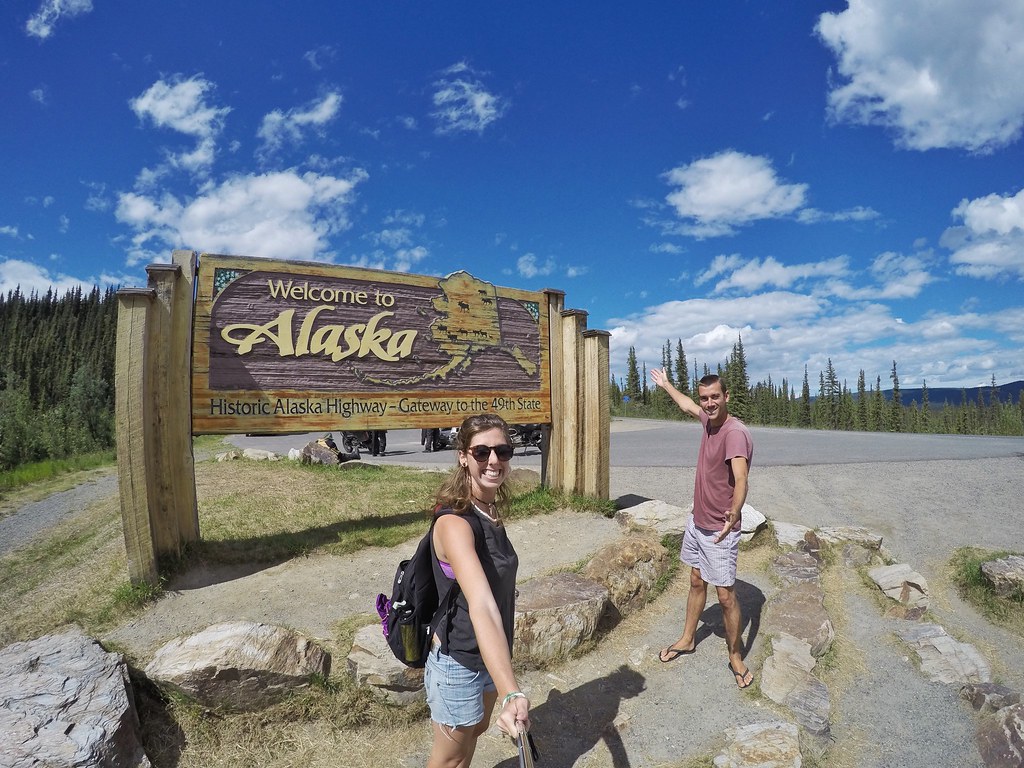 We stopped for photos where a sign welcomed us to Yukon, Canada and also Alaska heading the other way. We then proceeded through the longest No-Mans Land we’ve ever traversed; about a 20 mile road through nothing but wilderness. Just a few miles in though a truck came down a hill from the opposite direction. As he passed us he slightly moved onto the gravel shoulder to give us space or avoid a pothole and then we heard an almighty bang!! Our windscreen had been hit by a torpedo stone right by Craigs face and had hit us so hard that we were showered with tiny pieces of glass. Craig calmly pulled over while I went absolutely ballistic screaming and shouting ‘FUUUUCCCKKK’ over and over. How could our luck be so bad? We’d literally left the mechanics just two hours before. And it was just typical that Alaska didn’t let us leave without a trademark ‘Alaskan Windshield’. If it was a crack, or a chip then we could live with that, if it was on the passenger side then we’d probably be allowed to drive with it. But the position and severity meant a new windshield and one hell of a bill.

The impact of the rock had literally pushed the glass inside our van, we were very lucky that A) the glass didn’t go into our eyes and B) the rock didn’t come completely through the screen. I just put my head in my hands. Man does travelling have its ups and downs. We set about cleaning the glass up, it literally sprayed everywhere, all across our dash, inside cup holders, the creases in our chairs, then it spread into the back of the van sparkling on the carpet and twinkling on the window seals, we even found bits on the back of the bed. I suspect we will continue to find glass for a long while. Craigs hair was like a mirrored disco ball with glass shards resting on it. The dent seemed pretty fragile and we didn’t want glass to keep sprinkling down so we used some bandage tape from our medical kit to seal it up which seemed to work well. We also did some marks at the top of each crack to see if they spread. 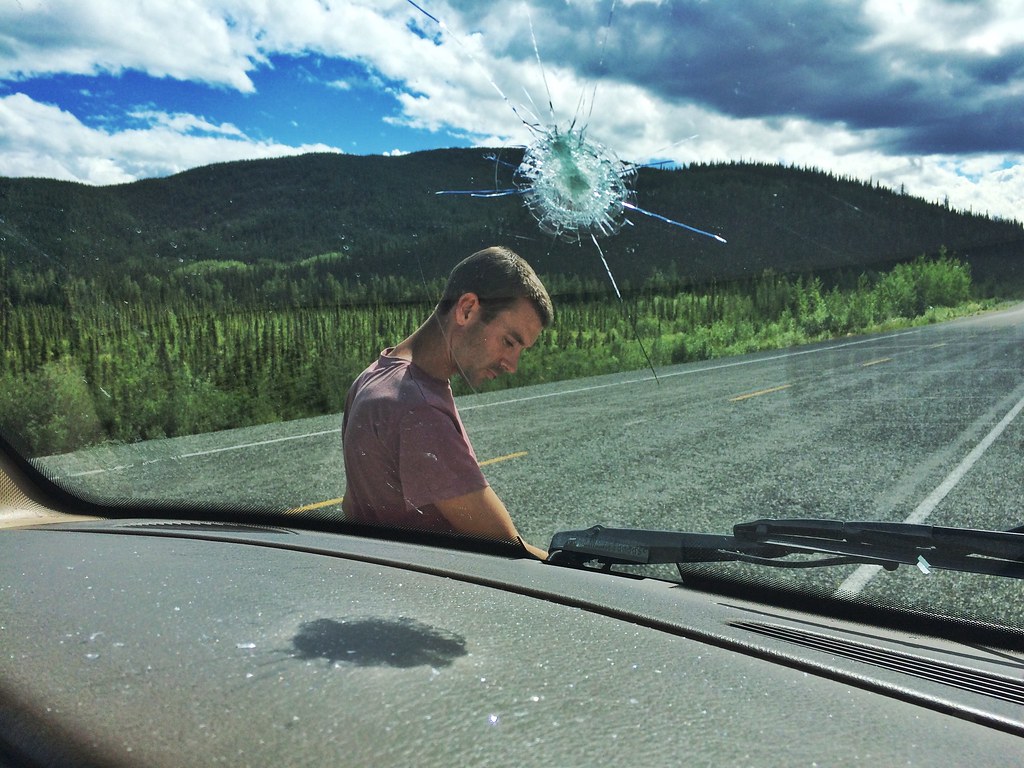 Then we had the worrying thought about Alaska having pretty laid-back car rules, there’s no safety checks and lots of cars have cracked screens. But Canada could be a lot stricter and we were paranoid that the border control would deny us entry or say we weren’t allowed to drive with it like that and we’d have to get towed to the nearest garage…right back to Tok where they overcharged us. Brilliant.

Luckily the border guys were more interested in asking us if we had firearms or animal products on us and we were let loose into the wild Canadian Yukon. We can’t help but flinch every time a car or truck passes us now and we’re wearing sunglasses come rain or shine for protection. Nothing like a relaxing roadtrip!

We spent that whole evening reflecting on what had happened, hindsight sure is a wonderful thing. What if I didn’t bother stopping at the US customs, or if we took a few less photos, or a few more, meaning we’d meet the truck at a different spot on the road. Craig actually said he had a sort of premonition; he’d watched the truck coming, saw him move over, then noticed him driving along the gravel causing dust and gravel to erupt around the trucks undercarriage, then he suddenly thought, one of those rocks could hit us….BOOM.

After spending a total of $600 on Daphne’s undercarriage we’re now looking at a sickening bill for the replacement windscreen at about CN$550. Any more big blows and this mammoth roadtrip might get cut short. I think it’s time Craig did a mechanics degree and I studied how to rob banks.