‘Hello, Bonjour, welcome to Canada’….we forgot how French Canada was but were quickly reminded with the road signs. Miles changed to kilometres and head lights were to be used at all times. The buzzer to notify us that our lights are on doesn’t actually work so we’ve already had one morning waking up to a flat battery. Thankfully a friendly man from Quebec gave us a jump start. He said where he lives in northern Montreal, no one speaks English, he’s only learnt it recently. Imagine that ay! Even food labels are all half English, half French and people pass us on hikes and say Bonjour, which kind of winds me up when we’re not even in Quebec, we’re across the country in the Yukon Territory.

We also forgot about the ‘no camping or overnight parking’ signs. Wild camping in Alaska was so easy, we only stayed in a city once and all the other nights were in beautiful locations in the wild. We thought the Yukon would be just as easy with its similar geography and vast wilderness but it seems rather strict so far. We’re still managing to find nice spots though but it’s making us a little more weary about when to end the day’s drive incase the next few camp options turn out to have signs. 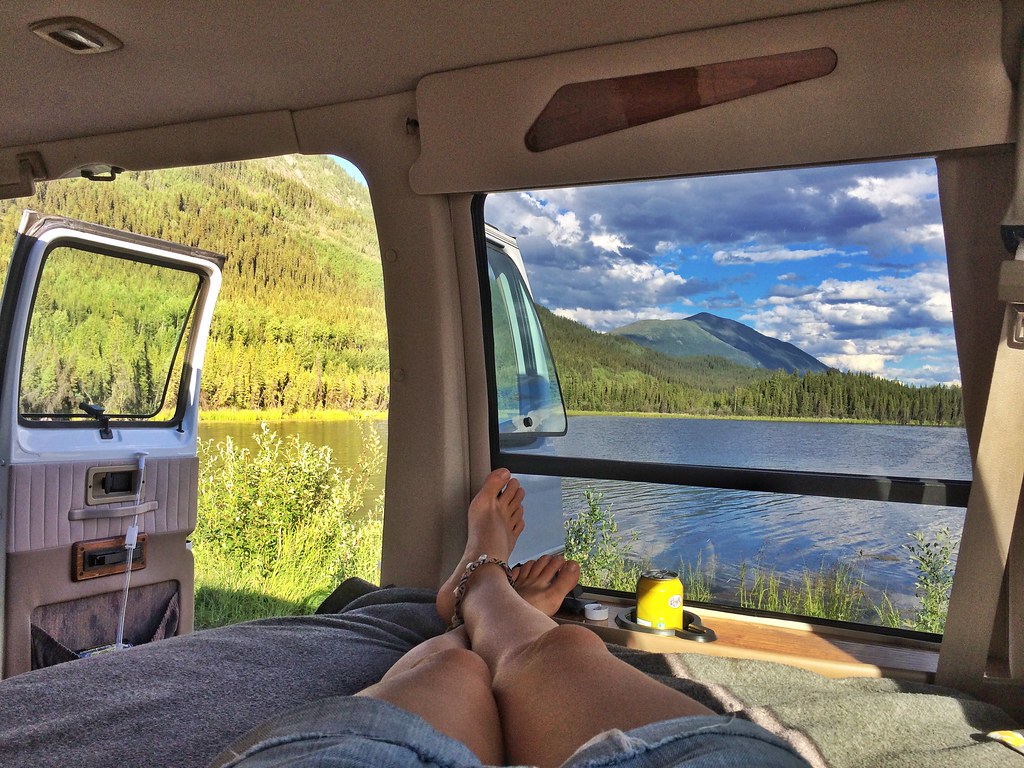 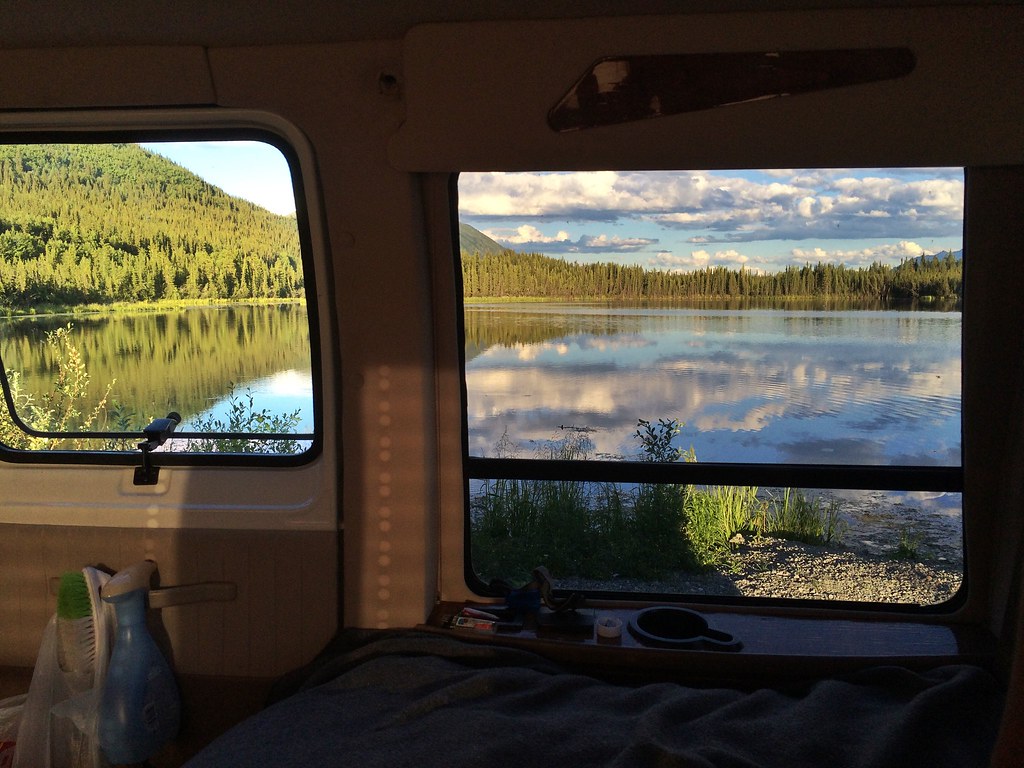 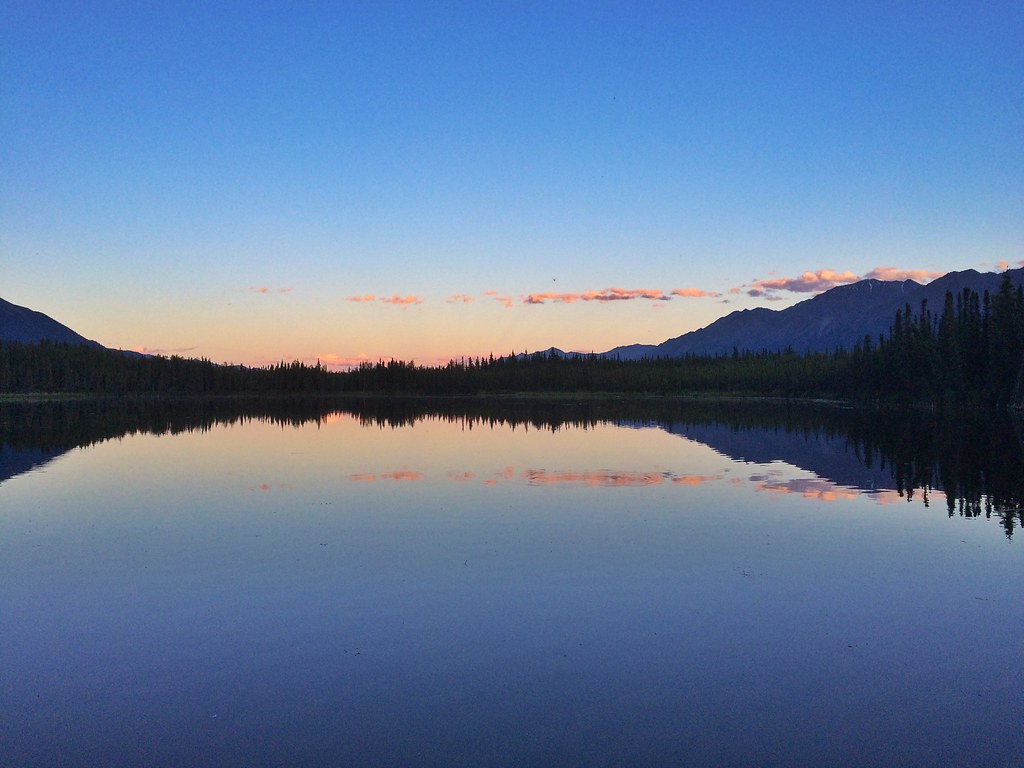 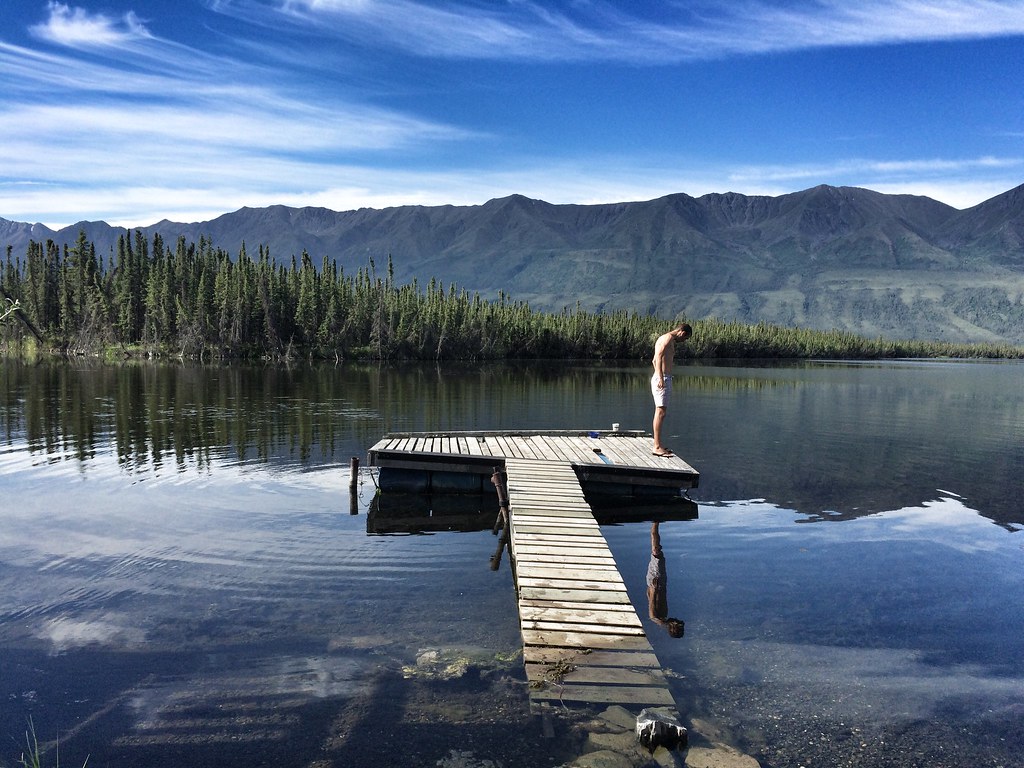 The information lady at Canada’s westernmost village was delighted to tell us how shit the road conditions were about to become. We had 50km of road constructions. It was basically long stretches of gravel road and sporadic bits of Tarmac. Traffic lights were positioned at each gravel section and we’d have waits of up to 15 minutes for a pilot vehicle. They didn’t even change the traffic lights to green, instead they wrote ‘follow me’ on the back of the dirt covered vehicle. The roads weren’t actually too bad and it was nice having one way traffic as the gravel wasn’t flying everywhere.

We drove through non stop wilderness but amazingly didn’t spot a single animal. Eventually we had the Yukon’s largest lake in sight, Kluane Lake which made the drive very scenic. A dirt track led us down to its shores where we had lunch surrounded by candy coloured fireweed flowers. There were perfect bear prints leading up and down the dusty trails which is always an exciting find. The lake looked so tempting for a swim, it was crystal clear with a gravel base but due to its size it was still very icy from winter and we decided against a dip. Instead, Craig insisted on filling up our solar shower with the warmer water from a nearby pond! Yuk! He said he was having a shower regardless and stormed off to fill it up by the reedy shore. I felt my greasy hair and saw that the water was really clear in the bag (minus a few bits of debris) so I had to go against my word and pleaded with Craig to share the water with me. 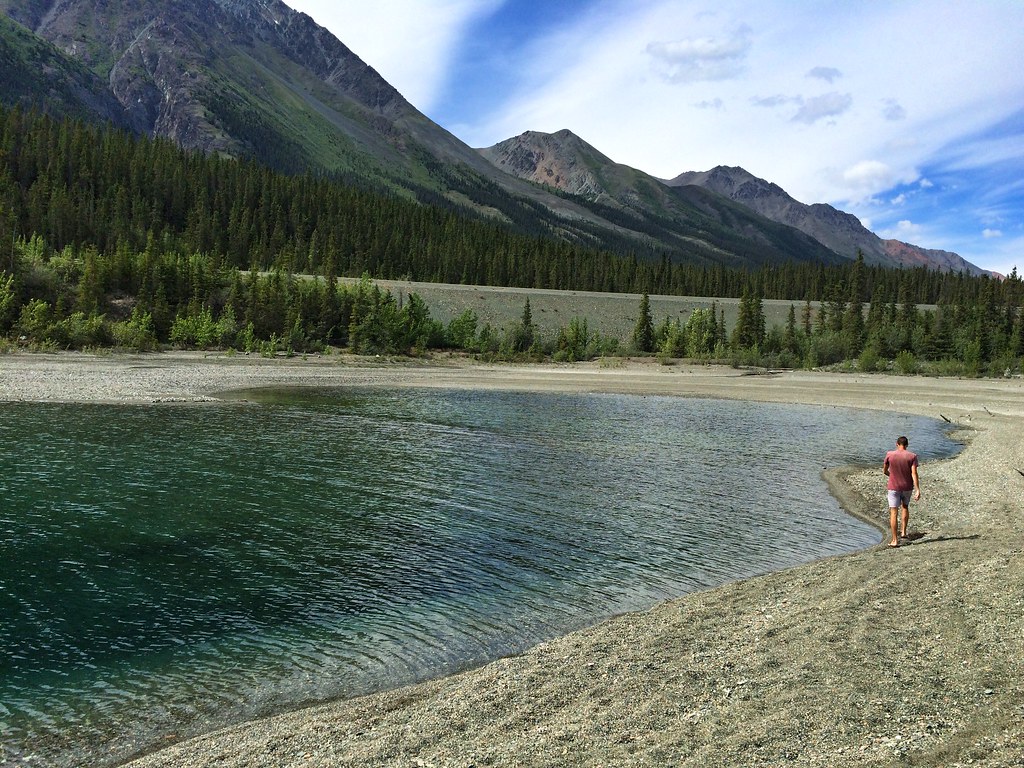 The next day we headed into the Kluane National Park which is Canada’s side of Alaska’s Wrangell-St-Elias National Park, the largest in the states and one we really wanted to visit. Sadly we didn’t as Daphne was en route to the mechanics and both roads leading into the park were dirt tracks, one of which was named Americas worst road for a long period of time but has improved over the years. It was a hard decision to not detour back after she was fixed up, but we didn’t want to make her any worse, and upon reading about two ladies getting three flat tyres and having to use a tampon and duck tape to repair their last spare we decided to give it a miss. On the plus side we could easily access Canada’s side of the park so we dusted off our hiking boots and set off on the Sheep Creek Trail. The path was up there amongst one of the worst due to the thick dust. Plumes of dust swooped into the air on every step and the thought of another pond shower became rather appealing. 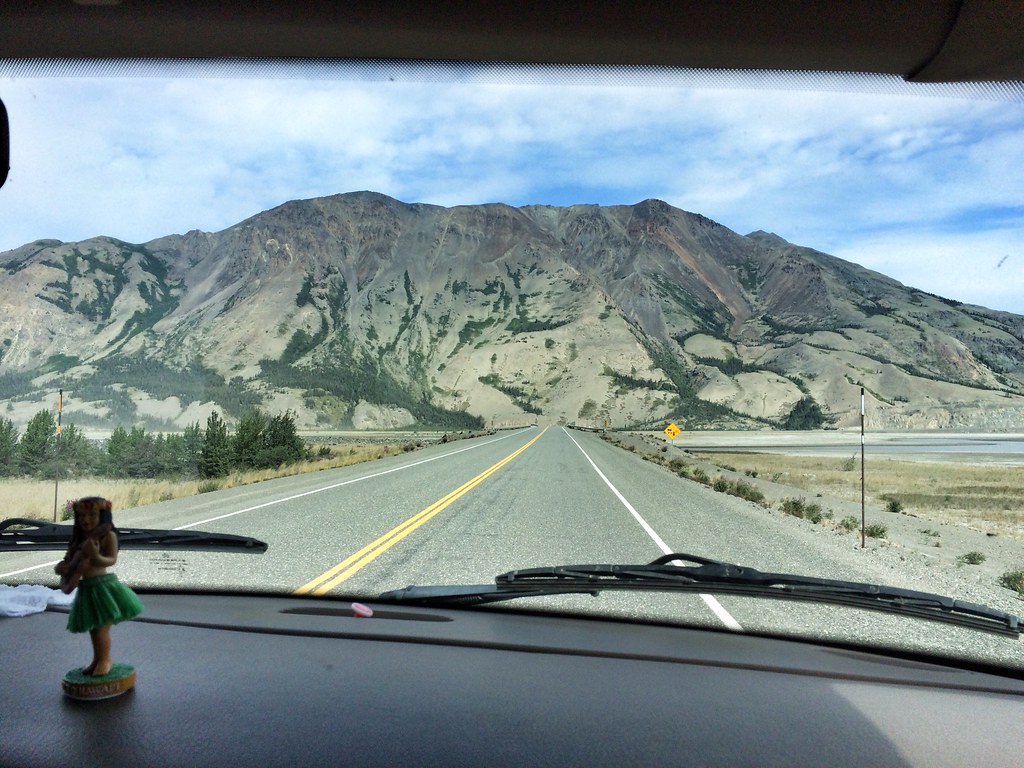 Regardless of the dust we climbed 1400ft and the views were superb. A deep valley spread out to our left with jagged peaks holding the last remaining patches of snow in their nooks and crannies. We then entered a lush green valley full of vegetation to one side and dropping at the bottom like a canyon down to a river. Behind us the colourful sheep mountain would of looked more in place in a desert and a few hoodoos clung onto the sheer edges. 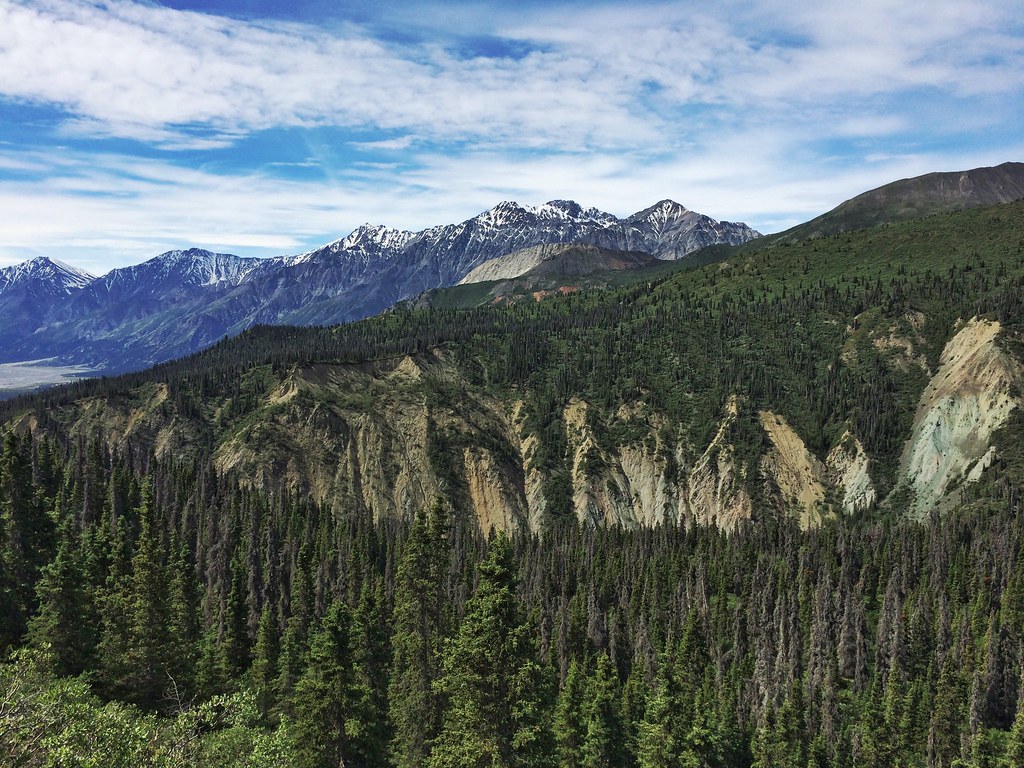 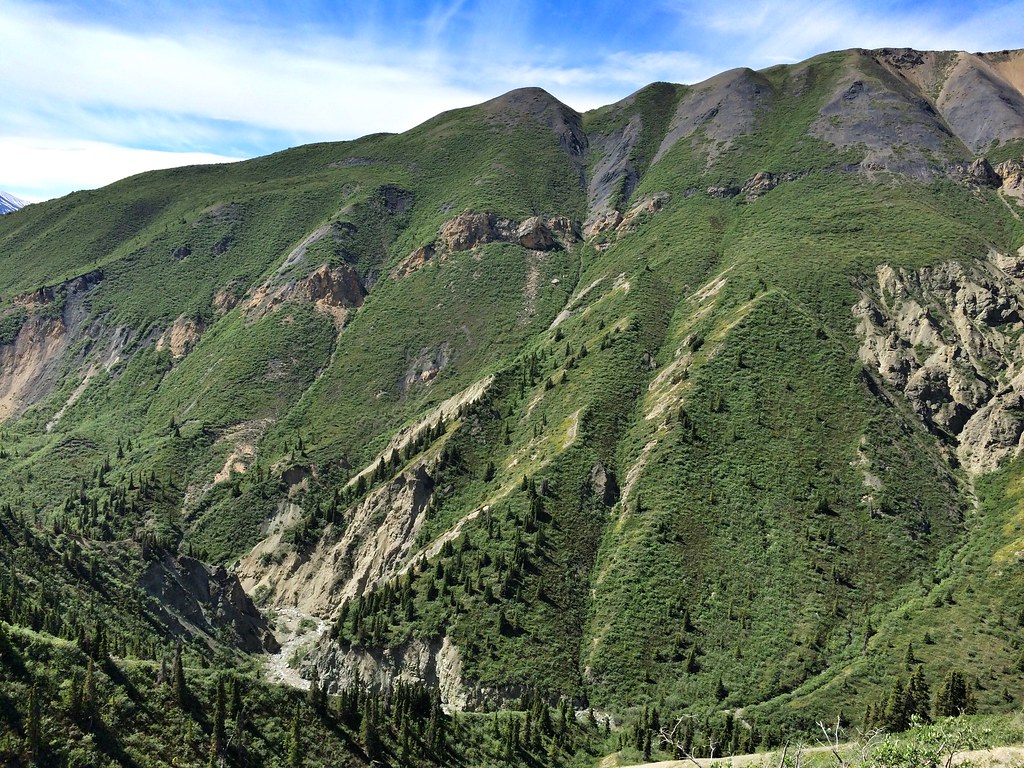 We spent the rest of the afternoon admiring Kluane Lake. A short trail gave us a view across the blue lake with a forested island and white river basin touching its shores. The dust erupted in the afternoon winds and caused the tranquil area to turn into a desert-style storm. It was a really lovely area though and we thoroughly enjoyed exploring it. Bring on the rest of the Yukon! 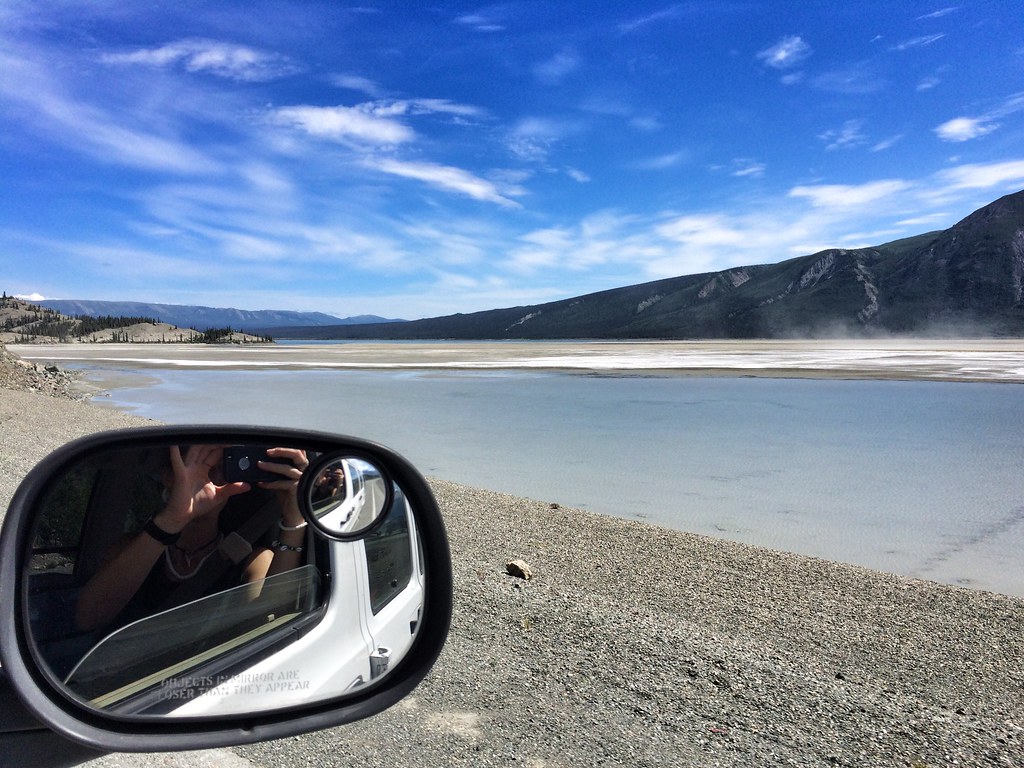 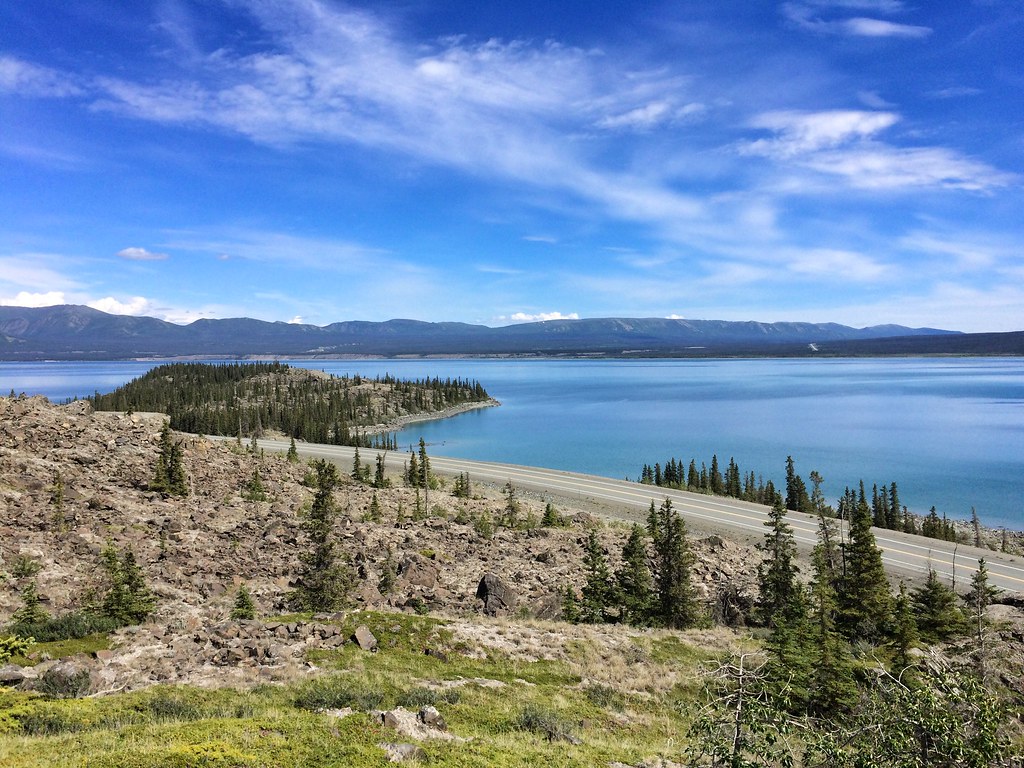