Daphne the van has been making some nasty noises while driving on bumpy dirt roads and it turns out that her steering rod needs replacing. The garage in Valdez (the one and only one) didn’t have the part but ordered them in for the next day. So we were stuck in paradise for another day and it turned out to be a blessing in disguise…

We took some random roads we hadn’t been along before and looked for a nice spot to spend the day. One road went alongside the river but the opposite side was the towns dump sites. A car ahead of us had stopped so we slowed down, followed where his camera was pointing and were led to three beautiful brown bears! A mum and two cubs! Ahhh we were overjoyed, we’ve been hoping to see a mum and Cubs for so long and there they were feasting on the top of a gravel ridge. We didn’t realise we were at a dump at that point and thought they were eating a fresh kill but then two cubs picked up a plastic wrapper and started fighting over it – they were feasting at the landfill site, what a shame. Amazingly though another bear appeared, there were three Cubs and one big mama! We watched them for a good 30 minutes as they lounged around eating a banquet of rubbish and chasing away Ravens before venturing behind the ridge out of sight. 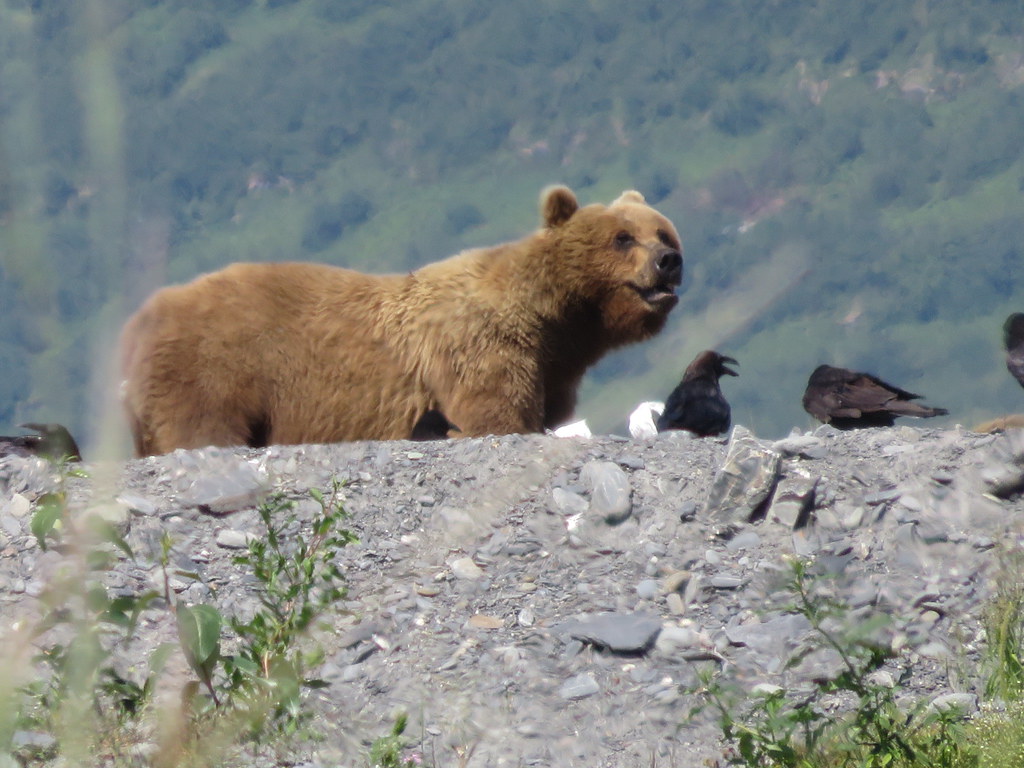 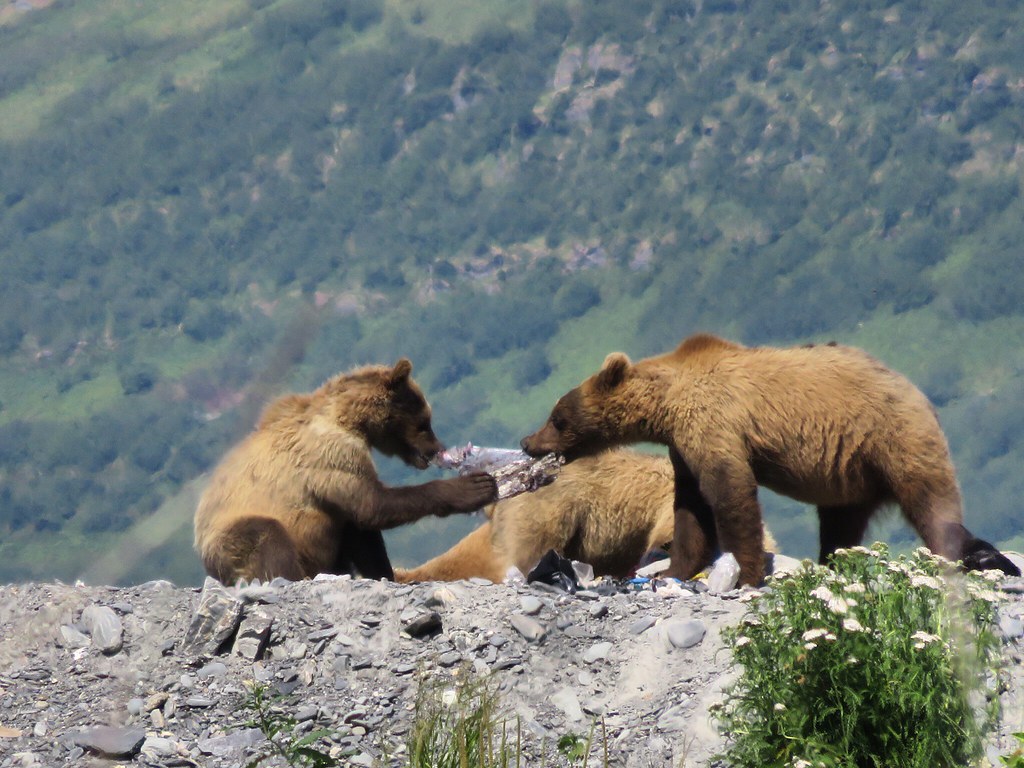 We decided to spend the rest of the day keeping an eye out for the Bears and the Ravens sure helped us pin-point them. We had lunch, dipped into an ice cold stream, followed some bear prints on the river bank, and finally had dinner….still no bears. A few cars were driving past slowly and searching – I guess we weren’t the only ones that knew about the dumpster bears. 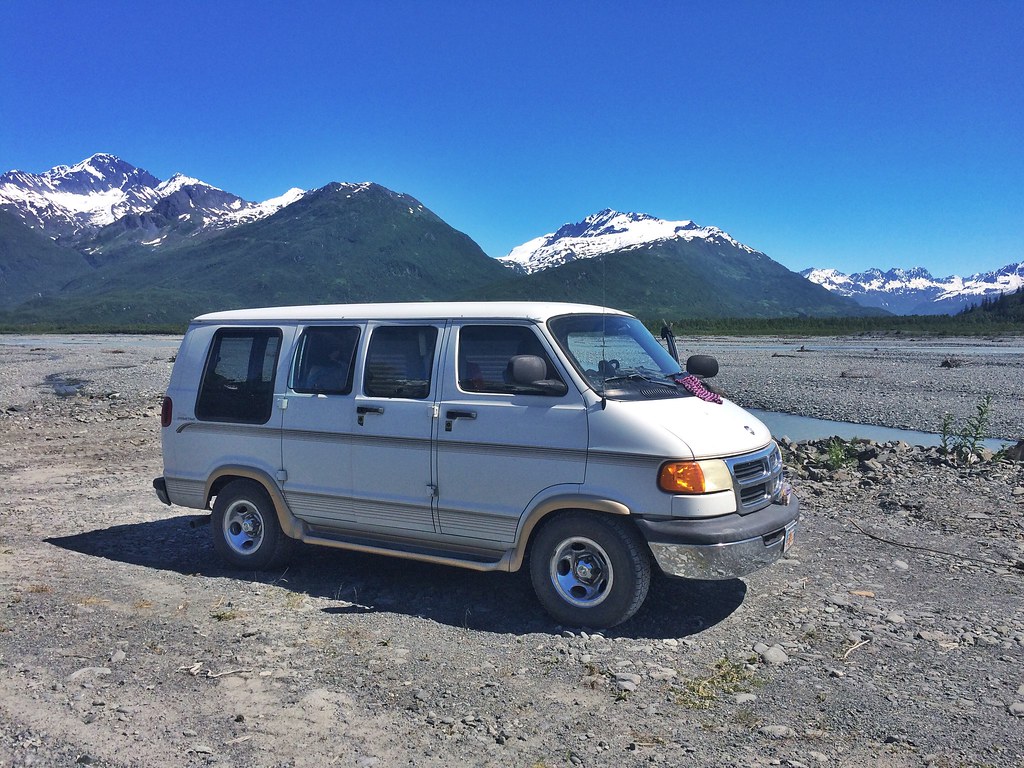 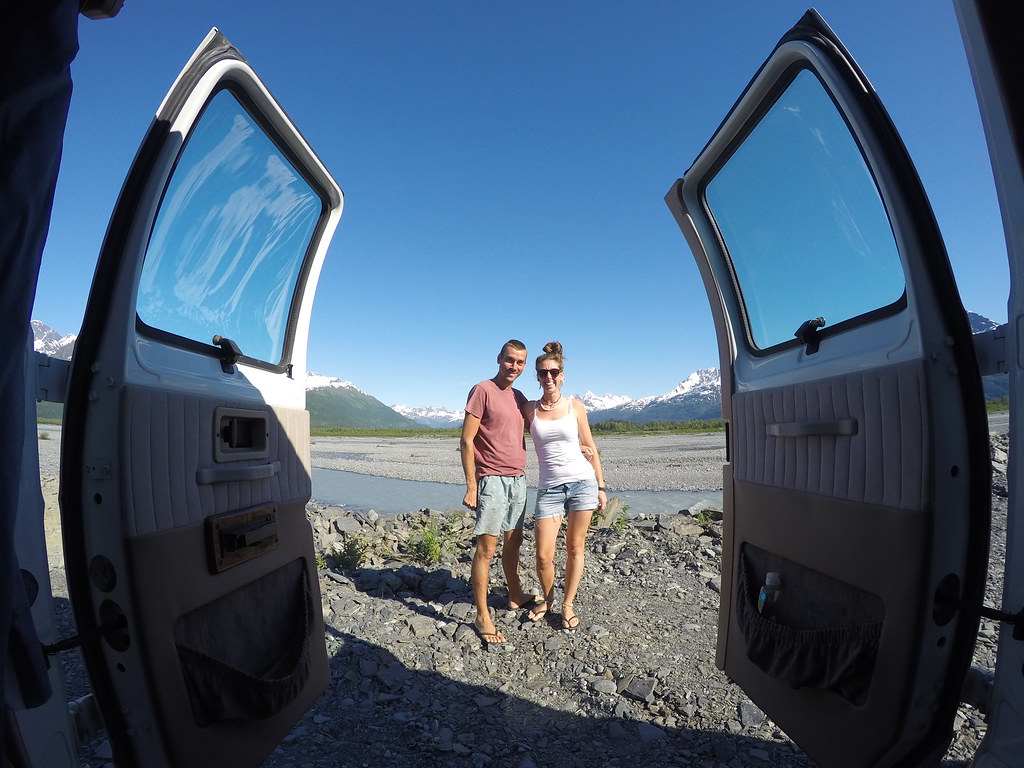 We picked a stunning location to camp with the braided river next to us and mountains all around. After dinner we walked the 100 meters up to the entrance of the dump and could see the Ravens further back but felt a bit nervous on foot so just headed back. We figured they were done showing themselves for the day so I went back to Daphne while Craig walked a little slower and kept looking over his shoulders for the Bears. Suddenly he started waving his arms frantically…the Bears were back! We dashed into Daphne and drove to the entrance and decided it was safe enough to step out and leave the doors wide open for quick access. A police car drove past and didn’t seem fazed by us standing and watching the Bears. It was so wonderful watching the family of Bears all on our own.

One cub started coming down the gravel ridge in the cutest manner; by walking backwards and letting the loose gravel slide it down the steep slope. Another Bear followed and we had to double take, “Craig…there’s five Bears now!!” What the heck! There were two big bears and three one year old Cubs. Then we realised they were sliding down the hill right our way so we got back to Daphne but the Bears headed back up the hill and were clearly just having fun. We didn’t know if the new bear was mum to one of the Cubs, and the original mum had only two cubs, or whether it was just a lone bear that had somehow been allowed to get very close to another family, a rare sight I’d imagine. Anyway, the new mum was playing around with a cub, who seemed to be giving her attitude and trying to shoo her away, it was really interesting watching their behaviour.

A car with four people pulled up and two men with giant cameras jumped out and ran our way. I said ‘Hi’ quietly and no one said anything back…nice. Then the women at the car shouted in a European language to the men, I’d imagine it would translate to something like this: “Hans!! Wait for us! We want to be attacked by the Bears too!” Craig and I were well pissed off – it was one of the few scenarios where we could silently admire the Bears as appose to making noise on a hike so they’re aware of us. We shhh’ed the lady and to our amazement all four of them walked past us and into the dump, within about 30 meters of the mum and cub play-fighting. We couldn’t believe their stupidity. A mama bear protecting her cubs is the most dangerous of bears, the second most dangerous is a bear eating, you don’t interrupt an eating bear. So they ticked the two biggest no no’s and were cockily snapping photos of them. 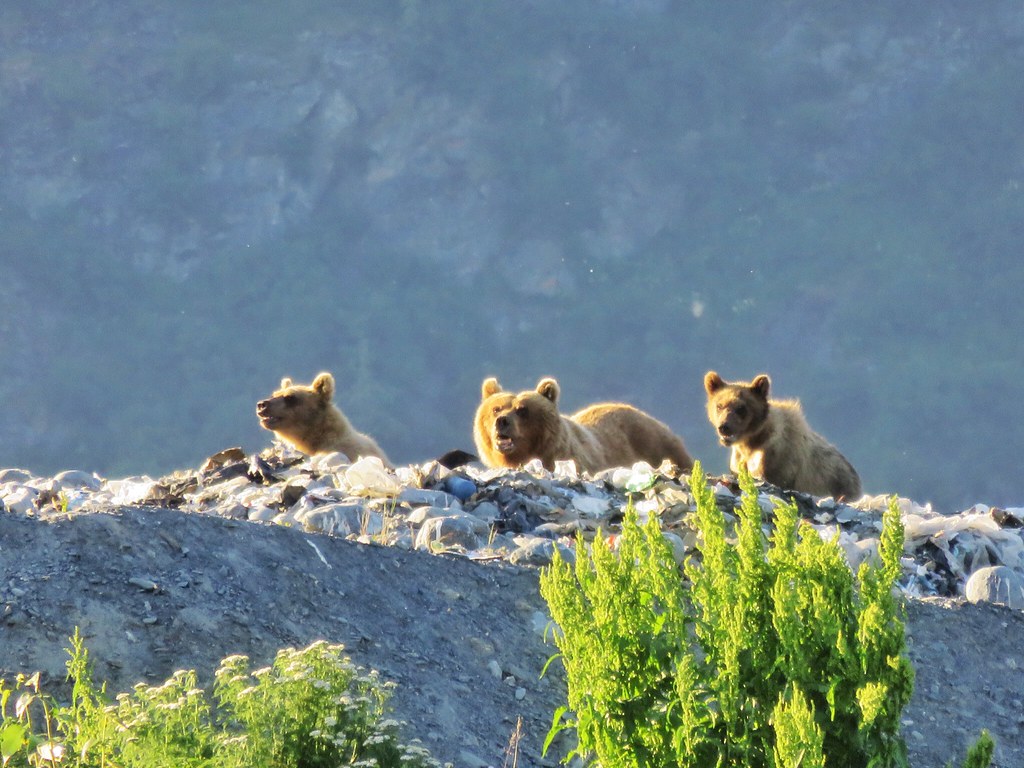 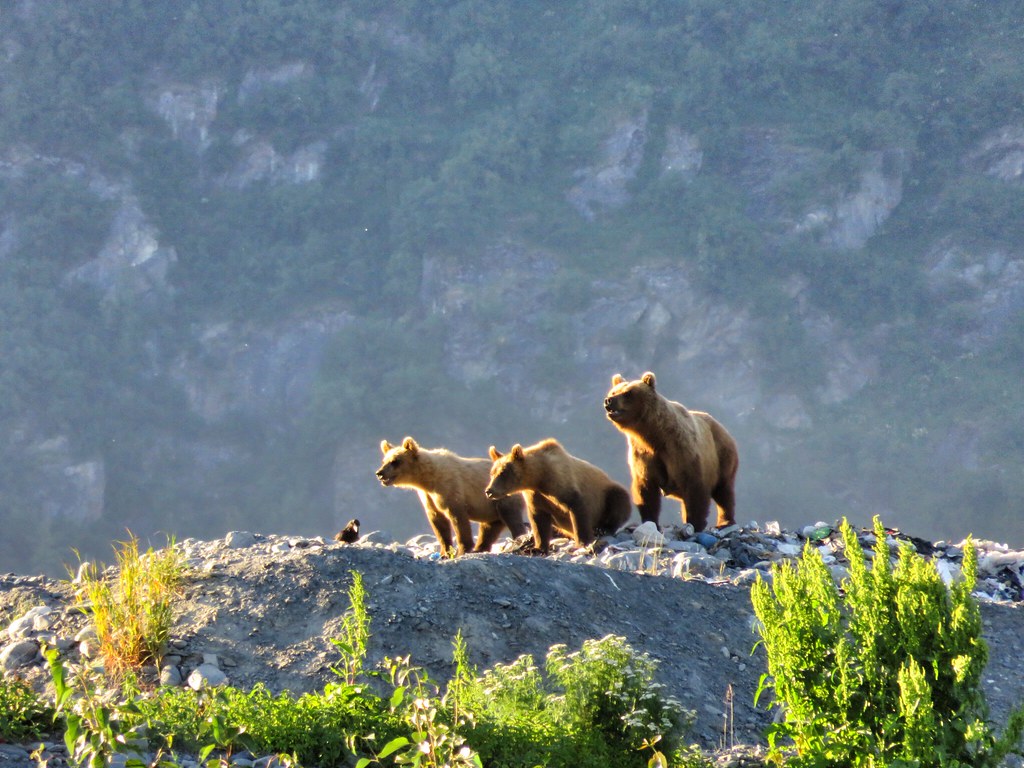 All five of the bears went from being relaxed, eating and playing to looking directly at the group of people. The big mama who we’d only seen lying down was now up on all fours staring at the group and huffing. A new car pulled up and a couple of nice Americans came out who did the same as us and left their car doors open just incase (unlike the four idiots who locked theirs) they too were amazed at the stupidity of the group. It looked like the bears were ready to charge so we began filming the scene as we couldn’t believe our eyes but instead the Bears decided to run away heading down the hill towards us and then to the right. We were quickly back in our cars and grouped together with the Americans to drive up the road where we predicted the Bears would cross. Well the first mum poked her head through the bushes right between our two cars, just a few metres from us and then looked around and backed away. Then she charged through the bushes with one cub in tow before slowing her pace and browsing the area. The cub actually waited at the bush line for the other mum with two cubs and joined them across the road. We watched them one by one run along the river bed to our right. It was lovely to see them in their natural environment. 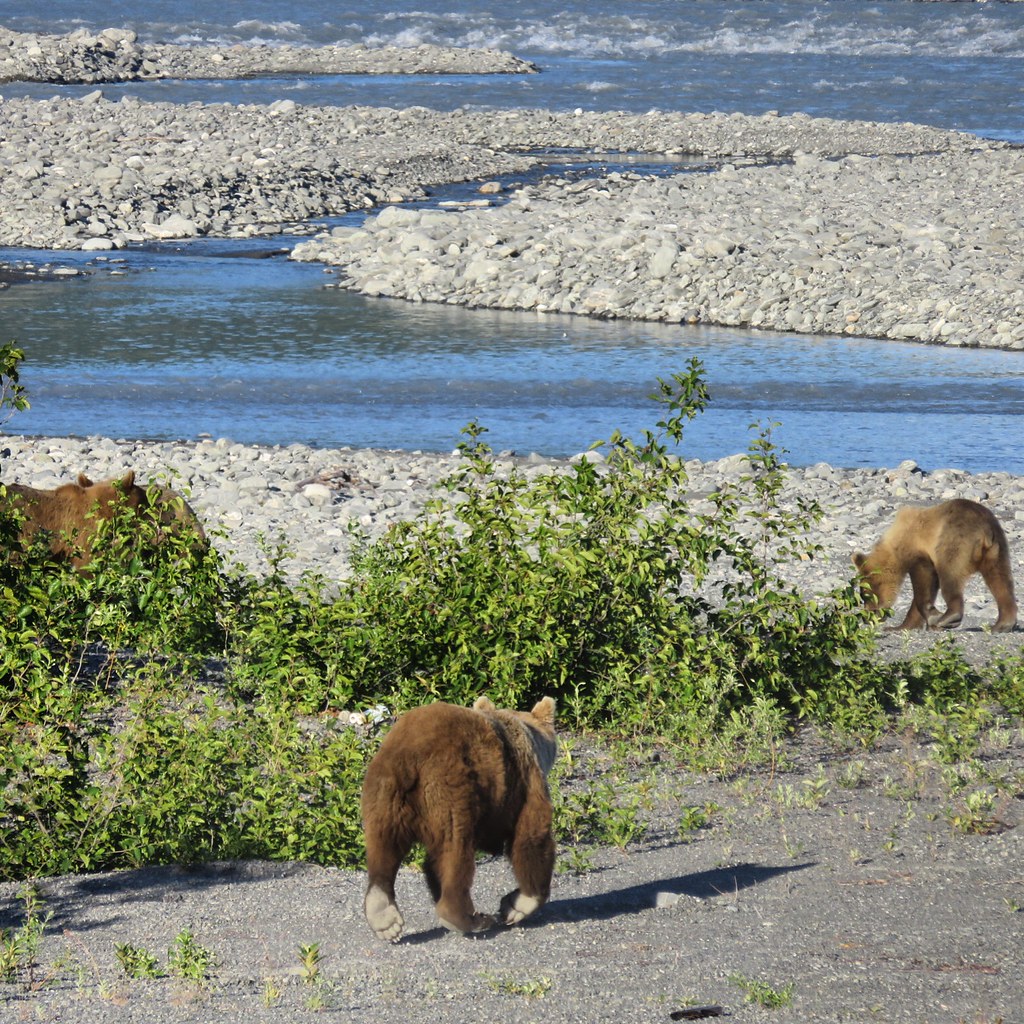 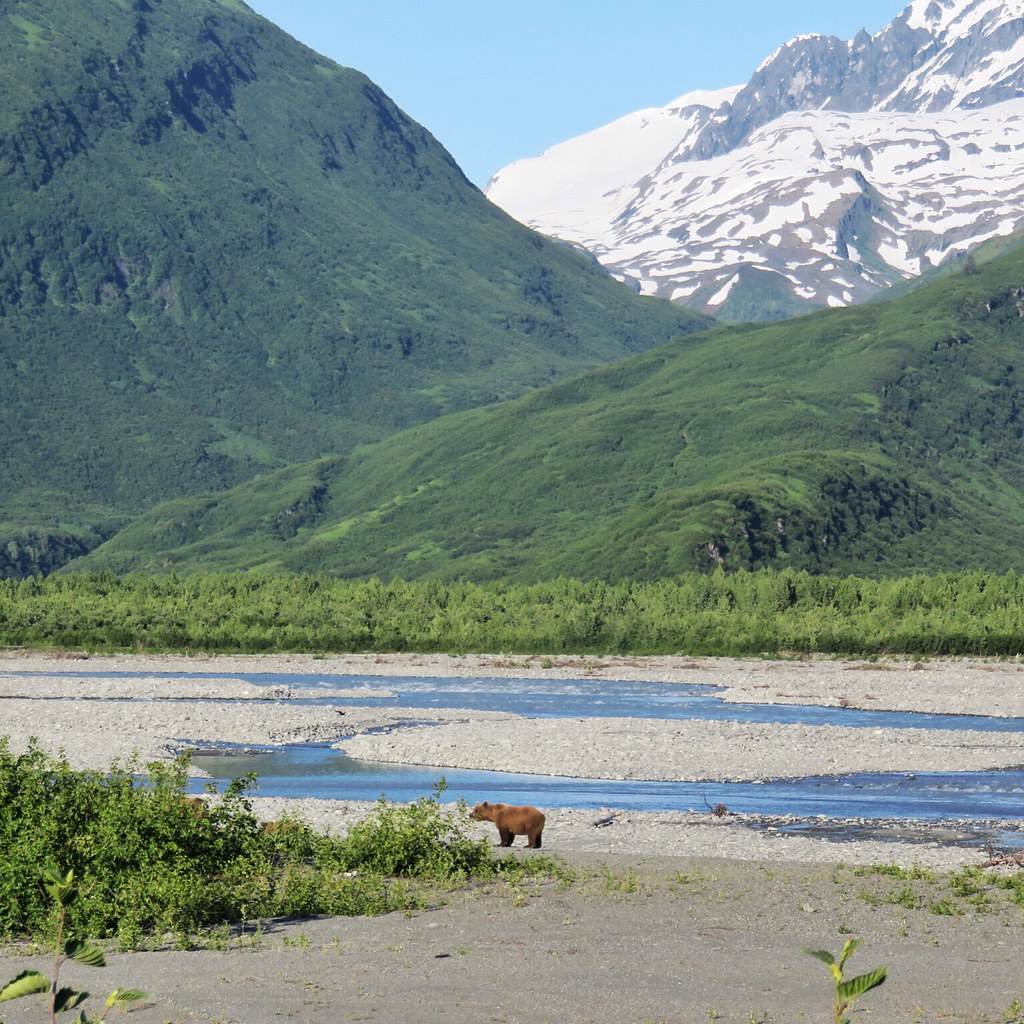 The four people missed the best show HAHA, suckers! But started photographing the Bears down by the river who were clearly hiding in a shady spot. Craig asked them where they were from to which they replied Germany in heavy accents. Craig got me going…he said “you know what you just did back there were extremely stupid” and then I joined in telling them that they’ve put everyone’s lives at risks, not just theirs, or ours but also the Bears themselves. If the Bears attacked or killed them then authorities would have to kill the bear. So I asked if photography was more important than life and everyone ignored me. I asked if they had a weapon on them…silence. We could only see one man with bear spray and it was on a cord around his neck; seemed like a really dumb place to put it as the spraying distance was far too close to his face. We were so pissed off with the group and their carelessness, “you know you’ve intruded on the Bears space and that’s illegal, they’ve had to leave their food source because of you making them uncomfortable” still ignoring me… Then the old lady, about 70 or so turned around and in broken English said “I live in Alaska for ten years” what a stupid comment, Alaskans wouldn’t confront Bears like that!! So I said “I’ve been in Alaska for only two months and I know better” they clearly had enough of my smart remarks and left the area. Good riddance!! So the Bears would of been left a bit antsy and pissed off now, imagine if an innocent hiker bumped into them, or the man with the metal detector we’d seen walking that very river bank just 30 minutes before, the Bears would be more inclined to attack. Silly German photographers!