Columbia Glacier is the second largest tide water glacier in North America and in recent years has been in catastrophic retreat meaning the bay its slowly carved is now full of icebergs for around 10 miles. We’ve seen glaciers and icebergs in Alaska already, but I really wanted to see some giant icebergs, like house sized bergs. We decided to risk it and spend the hefty $120 on the almost 9 hour trip. We find that travelling is like gambling, we have money we’ve saved for the trip which has to last us a long time but we want to go on excursions along the way and we can’t afford to do them all so we have to risk paying up, going on the trip and hoping it impresses us. Well you’ll be pleased to know that this trip was bloody awesome.

We went on the Lulu Belle boat run by an old chap named Fred. I really wanted to like the bloke and laugh at his jokes but it was all so rehearsed that it was just cheesy. We were talked to like a group of children on a school trip and he chatted the whole time. Once he’d finished bashing on about oil, fish packing and all things Valdez he got onto subjects that we were actually interested in, like wildlife…and then he hit the turbo button on the motor and his voice became a distant muffle. 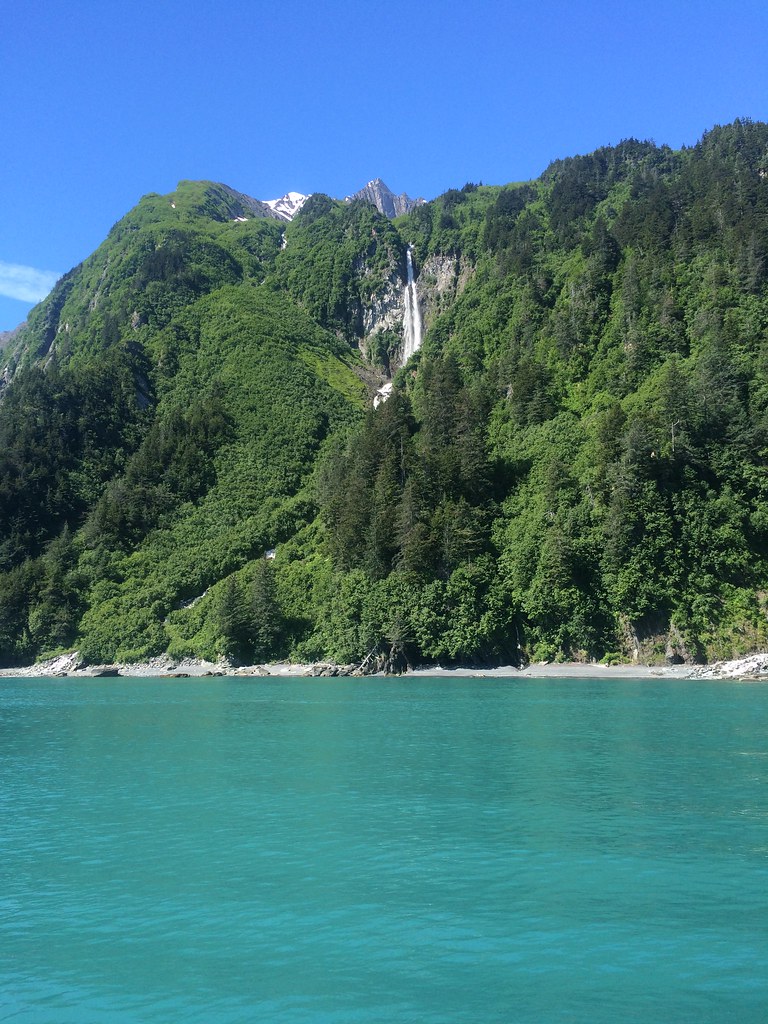 We passed numerous Otters as we cruised through the Prince William Sound. They seemed to hang around in groups with up to 6 lying close to one another on their backs with just their heads and feet poking out the water. There were a few false alarms on the whale watching front and I got close to punching a man who thought he saw Orcas….”don’t you dare get my hopes up!!” Fred took us along Glacier Island where every beach was infested with sea lions. Hundreds of them were roaring on the rocky shore and it had quite an apocalyptic sound to it, like a crowd of zombies. Some of the males were humongous blubbery blobs and the biggest ones were battling for dominance. We zoomed in with our camera and could see lots of cuts and blood on their skin from previous battles. I liked it when a few were fishing and jumping out the water. They’d swim right under our boat gliding so elegantly until they went to go on land and looked like fat slobs on a drunken night out. 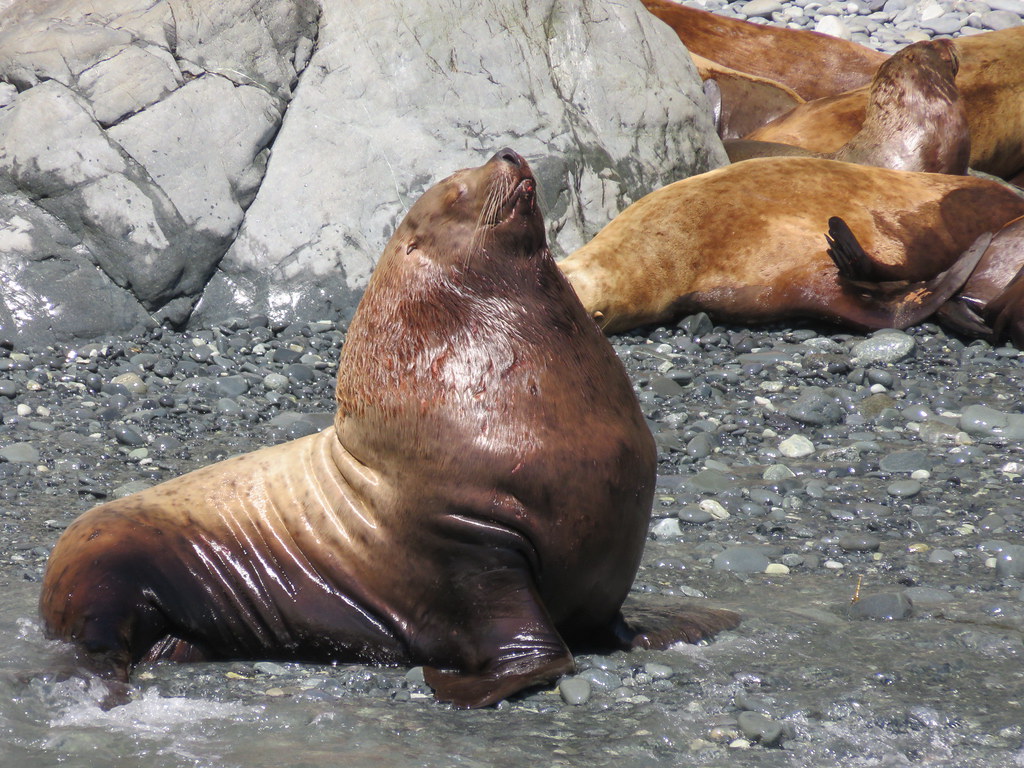 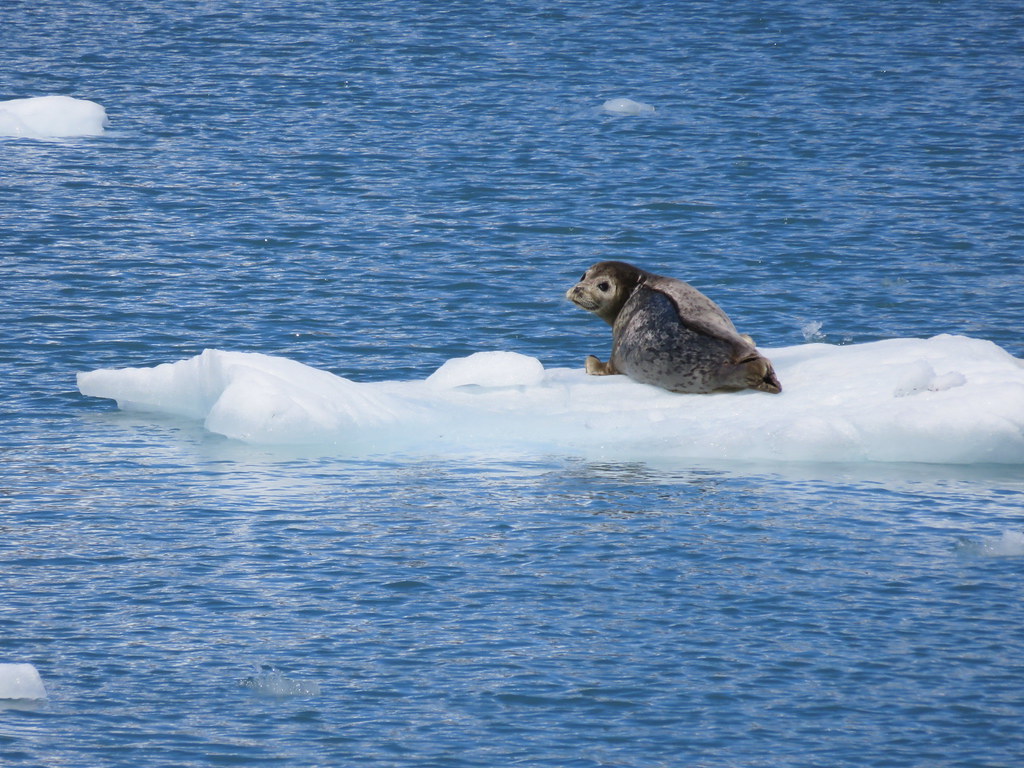 Finally we began heading to the Columbia Glacier. We had snowy peaks all around us and deep blue sky, how perfect! We could see an almost straight white line across the sea in the distance where the current and wind had stopped the icebergs in their tracks. We were soon surrounded by them and it was rather magical. They were all different shapes and sizes, quite spread out to start with but at times so close together that the sea was like a lumpy slush puppy. Fred slowly eased us through it whilst we listened to loud bangs and clanks as the hard ice hit our boat. I began to wonder how long we’d survive in a life jacket in such cold water if the boat sank. At least the Titanic had life rafts, we’d have to beach ourselves on bloody icebergs for any chance of survival out here. Most of the bergs were probably between half a car and a full car size, but there were quite a few incredible giants almost as big as our boat and even a mansion sized one in the distance. As we looked back the sun was shining through the ice and turned them all a beautiful blue colour. Some bergs had bizarre diagonal lines down them like a sheet of corrugated iron while others looked like a piece of sculptured art. Harbour seals hung out on mini ice islands and a few of the bergs flipped right over in our wake. 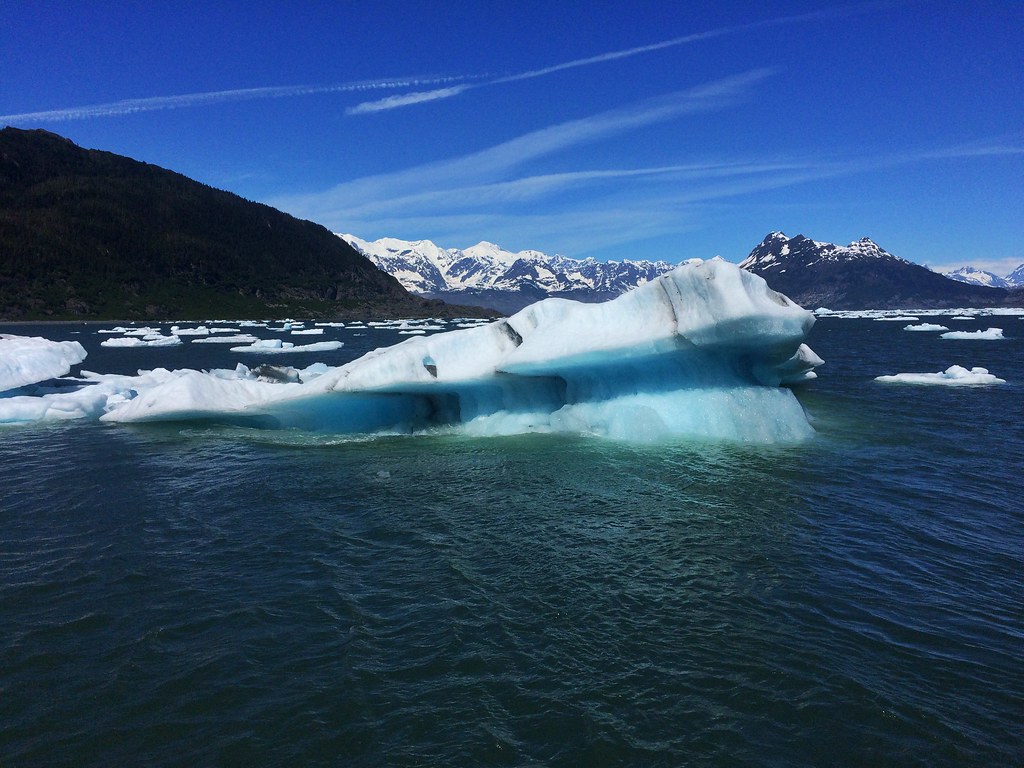 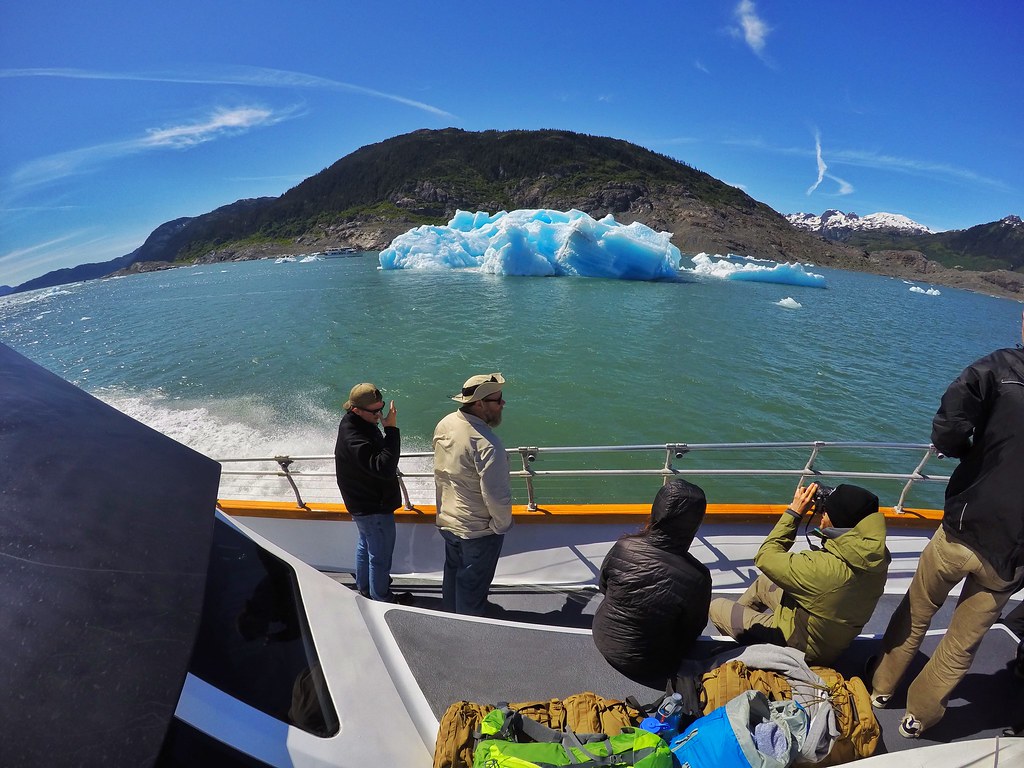 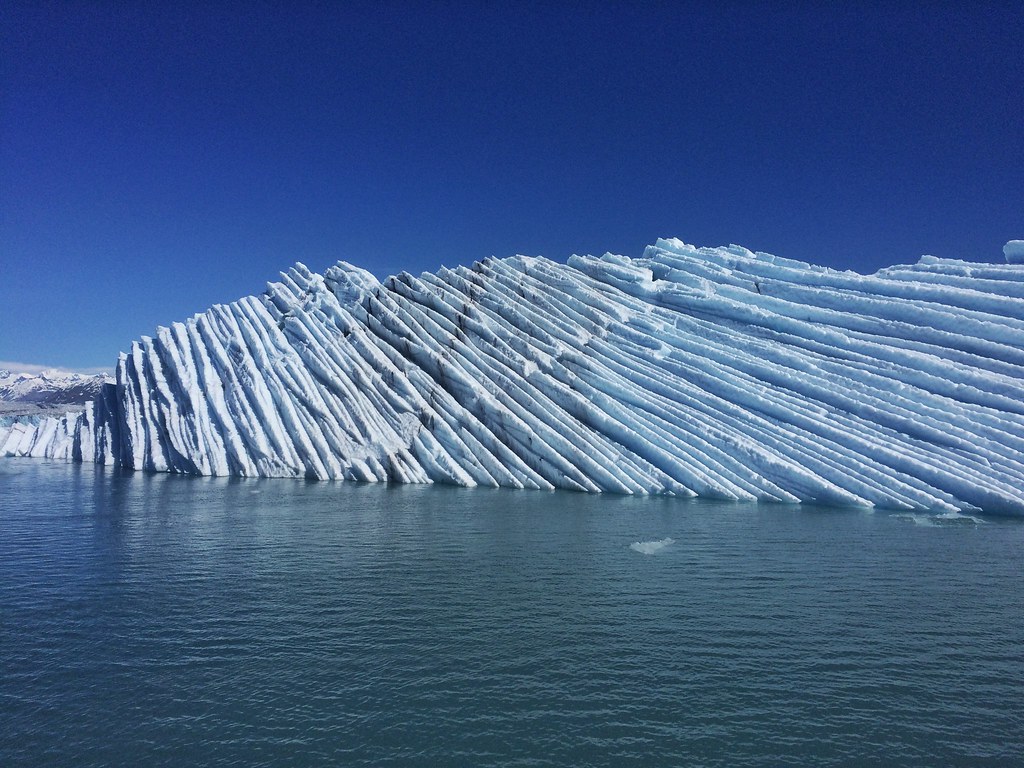 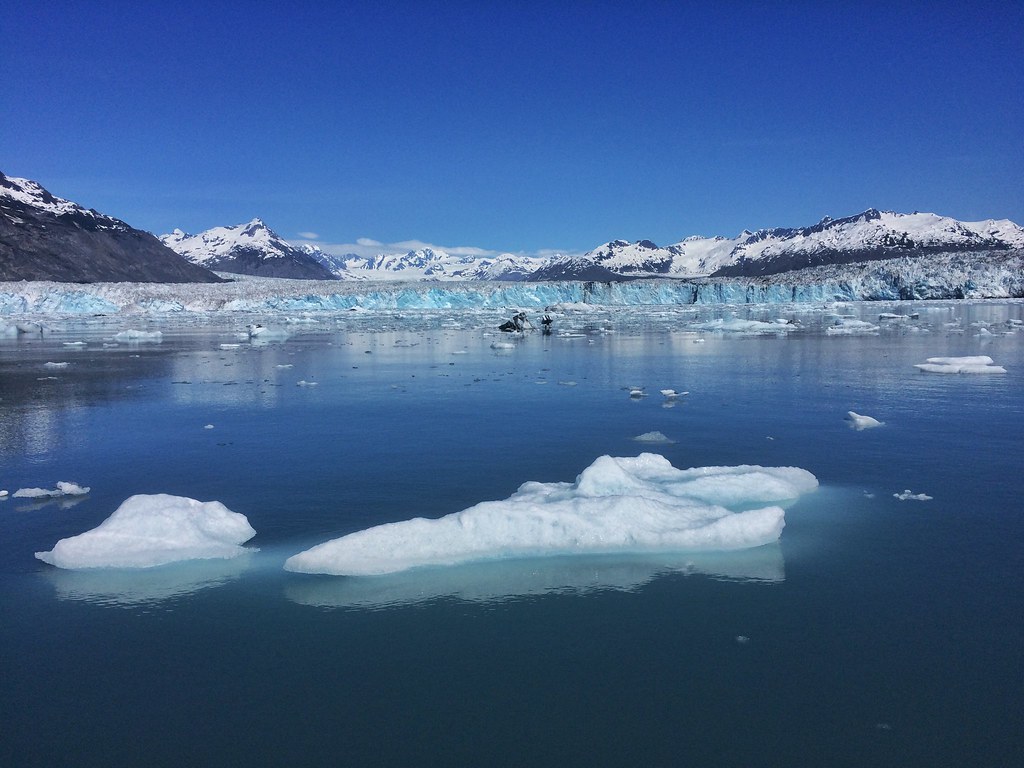 The true size of Columbia Glacier was becoming evident as we had a 180 degree view of the mile long glacier wall around us. Unlike the other boat company’s in town, Fred got a lot closer, within a quarter of a mile to be precise. It doesn’t sound like much but the glacier face rises as high as a football pitch, it had bright blue sheer edges where recent carvings had taken place and the effect of a big one can cause a mini tsunami style wave – so we didn’t want to get any closer. 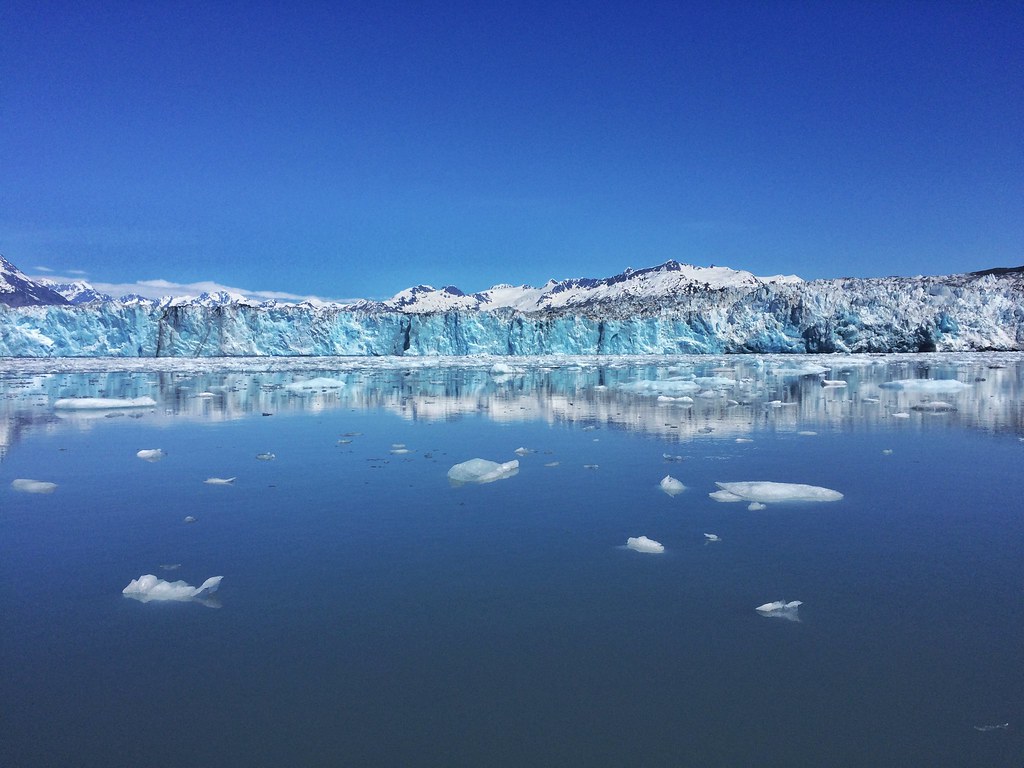 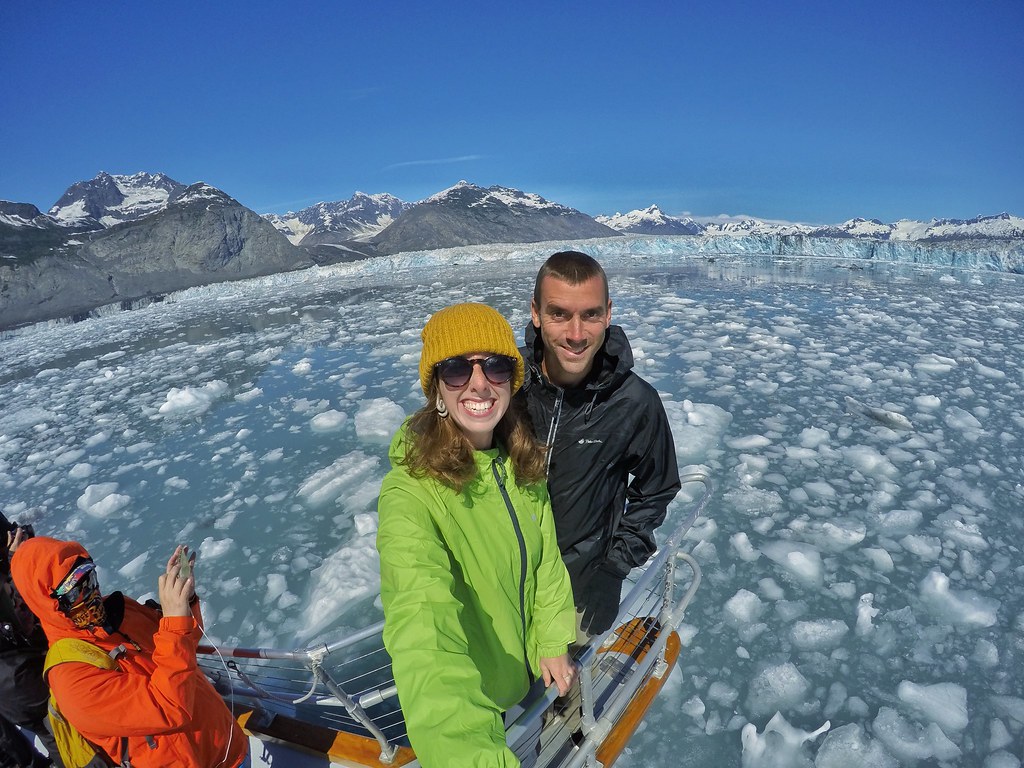 The wind congested the icebergs together which meant some areas were totally flat and empty except for the perfect reflection of the glacier. The captain stopped the engine for us to admire the jaw dropping sight and take photographs. Suddenly we heard a roar and then saw a big splash – it was our first carving and we quickly realised that the noise actually comes after the ice has fallen so we all began scanning the walls waiting for the next one. There were lots of small carvings while we waited and occasionally we’d see a section give way and tumble up to 300ft down to the sea. The captain noticed small bits of ice falling above a cave in the glacier and said to keep our eyes on that area. Low and behold a massive slab of ice broke off, followed by another one, then the huge thunder like roar came, a whoop from the crowd and a giant brown splash! It was incredible!! The tidal wave moved our way rising and sinking the bergs on route before doing the same to us and continuing on its journey till it lost all its energy. It literally felt like we were watching a live documentary and was a very memorable experience. 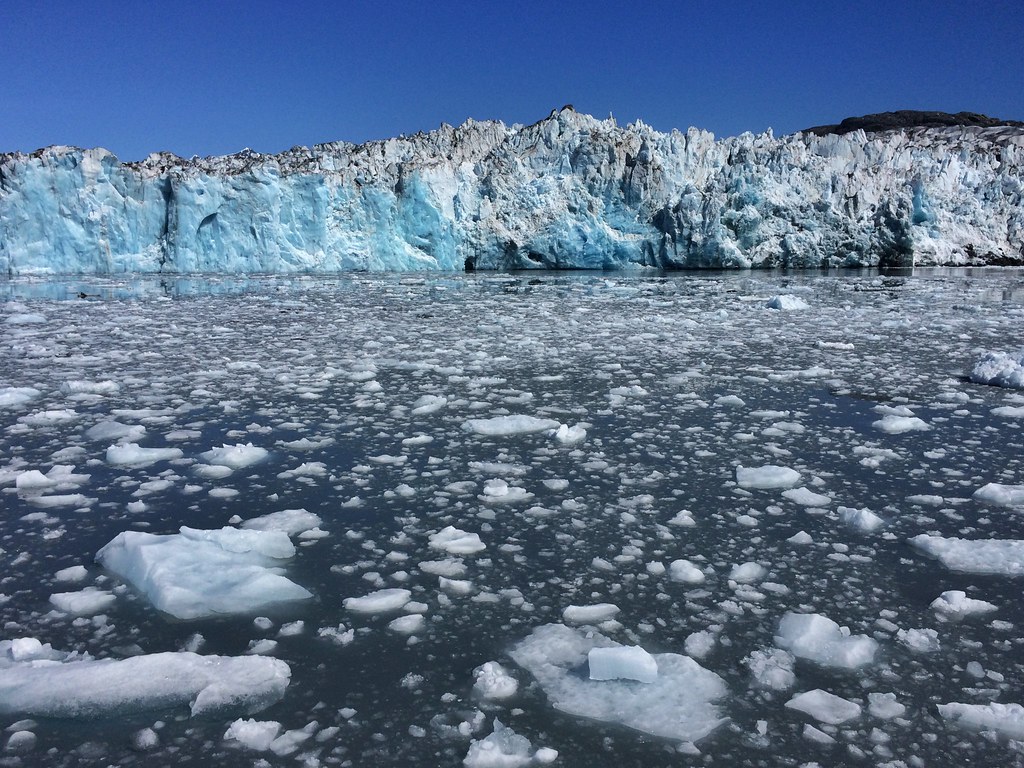 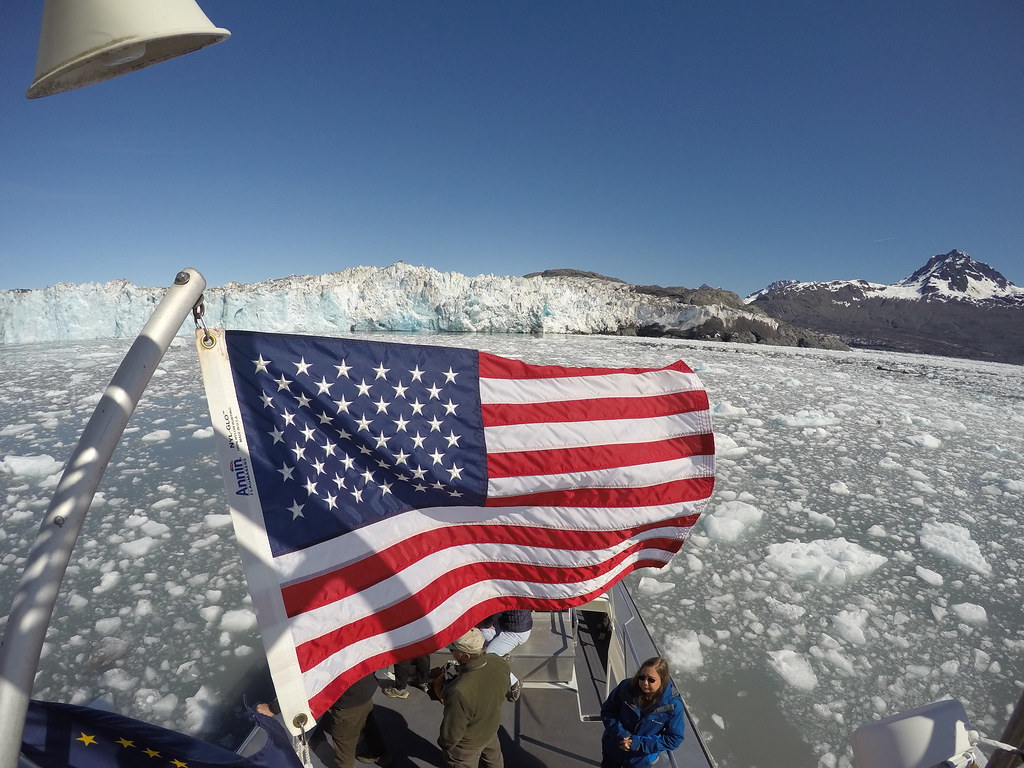 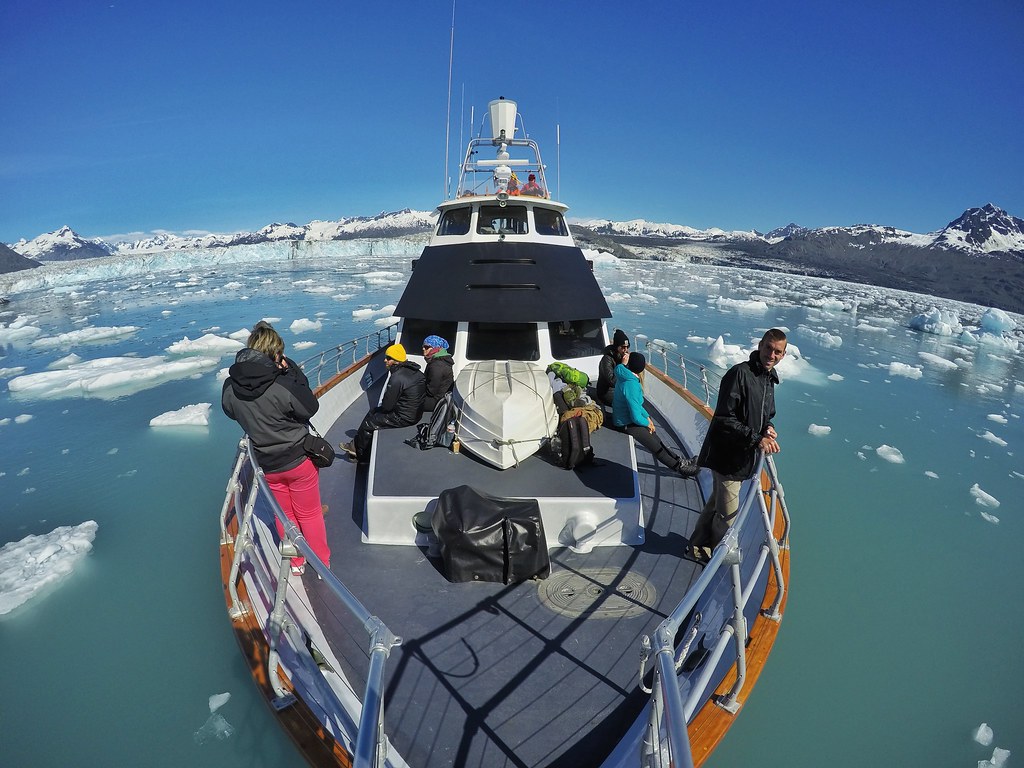 The time came for us to head off and Captain Fred had quite a job getting us out the sea of ice where wind had moved the icebergs together and trapped us in. Once we were back on track a humpback whale was spotted so we followed her for a little while. She was pretty chilled swimming by the surface and her dark shape was just visible through the plankton and krill filled sea. She’d occasionally blow out a big spray of water and after nearly ten minutes went for her final big dive down. Amazingly it was the closest we got to her and Craig wasn’t prepared for her to be there so we have some very zoomed in photos of her perfect fluke. 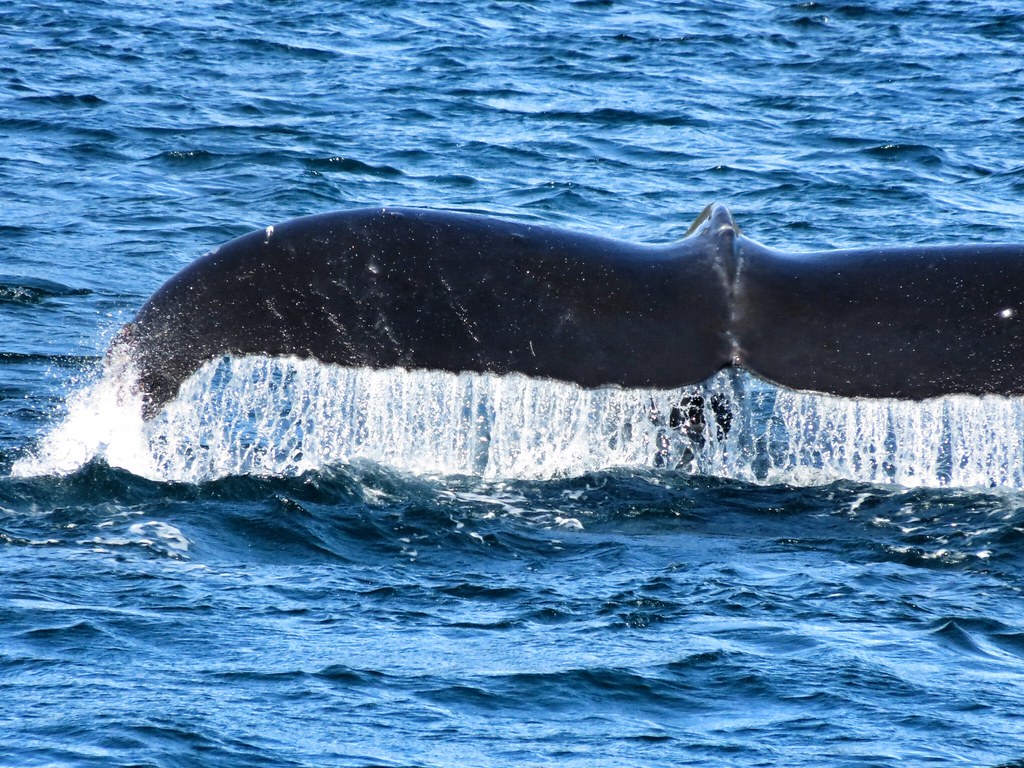 It became far too cold out on deck after 6 hours battling the winds so we retreated inside and would sporadically run out when the captain spotted wildlife like Dall Porpoises. They basically look like baby Orcas and were jumping through the air fishing and playing while seagulls tried their best to steal their fish. Much to my excitement, something happened that I’ve wanted to see for so many years – they grouped together and swam in the bow of our boat!!! I was like a kid at Christmas. It was just amazing watching them power through the water beneath us and it was the icing on the cake for our boat trip, totally worth it! 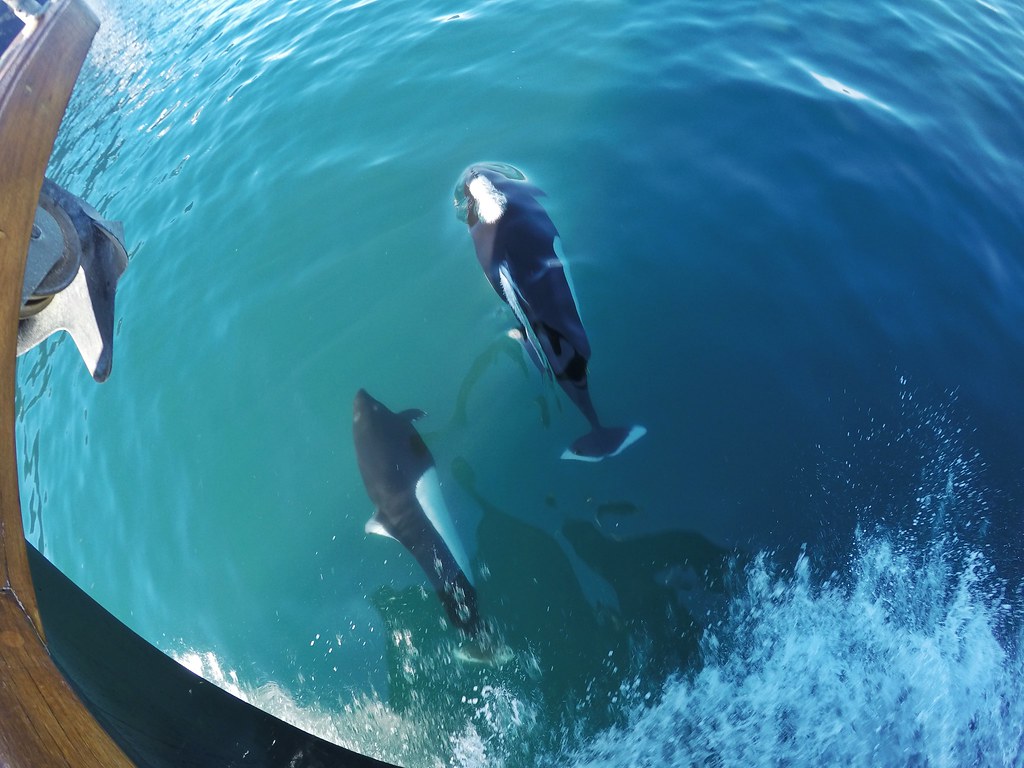