‘Even Mother Nature has her favourites’ – Valdez sure picked an apt caption for advertising the beautiful town and we were quickly wowed by the stunning location. Valdez is set beside the ocean where some of the worlds highest coastal mountains rise over 7000ft from sea level up to the sky. The sun was shining and we were ready to explore! 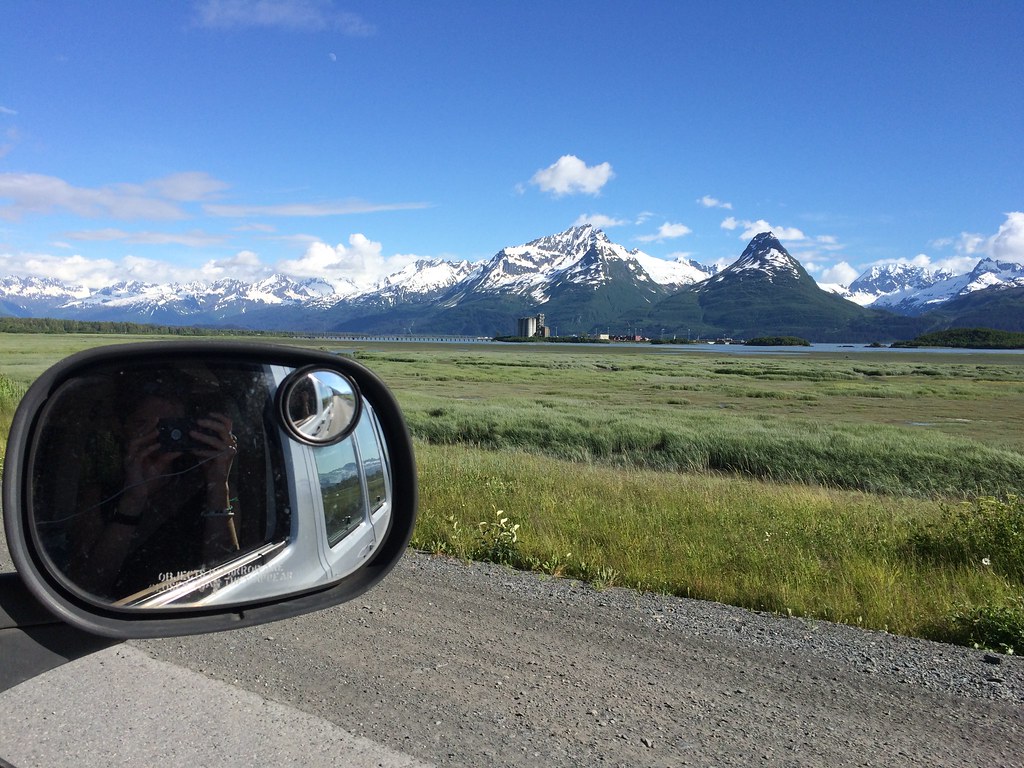 We picked The Mineral Creek Trail to hike along which led through a narrow, lush green valley where waterfalls plummeted down the sides. It looked more like Hawaii than Alaska. We drove Daphne as far as she could make it on the horrendous dirt road where there was a big wash out below a waterfall. Even crossing the road on foot was tricky through the foot deep, icy-cold water. We soon realised that we weren’t a fan of the hike, mainly because we were surrounded by dense bush and didn’t like our lack of bear visibility. Just the day before we’d watched a beautiful black bear from the safety of our van. It was walking at the base of a mountain and going in and out of the meadow and bushes. We drove along for over 30 minutes following the bear, occasionally it would stop and sit, then plod on some more. We found it interesting that when we lost sight of him in the bushes we could still tell where he was as he was stepping on all the branches causing them to move much more than the wind could blow them. So there we were on the Mineral Creek Trail surrounded by dense bush on either side and dramatic valley walls high above us. A 4×4 came along and the man asked where we were heading “up the road…” seemed an odd question as it was a hike I’d read about in our guide book and at the info centre so fairly well trodden. He asked if we had a weapon on us…such an Alaskan question! Our answer was clearly a no as they count our bear spray as a peppery condiment. He then warned us that there were lots of bears along the valley and to be careful and make lots of noise. We plodded on but round the corner we heard a distinctive rustle in the bushes to our left, and again…Valdez hardly has any moose, nor caribou, but it sure has lots of bears so judging by the heavy sound of the branches snapping we had a bear very close by. We paused to listen and heard a couple more noises, Craig quickly grabbed the bear spray at the ready and we back tracked the way we’d come. Thankfully we didn’t meet the bear, as much as we want to have bears encounters, bumping into one on a hike scares the shit out of us, especially when walking through a windy valley – the spray would come right back at us and can cause blindness. 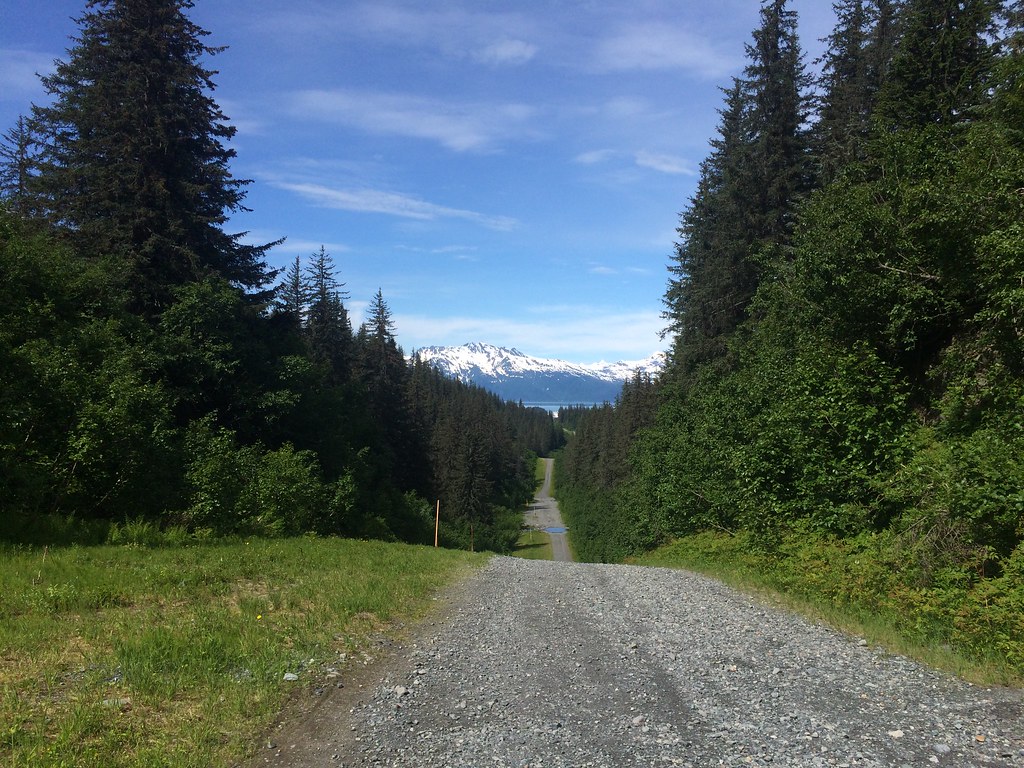 We spent the rest of the afternoon strolling through meadows covered in wildflowers and wandering along a pebbly beach looking at otters in the distance and basking in the extremely hot sunshine. We really fell in love with Valdez; every time we looked at the crisp, snow capped mountains we couldn’t help but make a comment about how stunning the views were. The town itself was very ugly though with the exception of the fishing harbour, chocker-block with boats, fish, seagulls and eagles, it looked like the perfect 1000 piece puzzle. The residential area around the town was a big contrast of grand houses and manicured lawns to old mobile homes and overgrown weeds. In England you tend to get separate roads or areas where I guess the rich and poor live separated lives but it was all mixed in Valdez. Although it’s one of those situations where I’d prefer the mobile home and then I get a lovely view of a stylish log cabin. 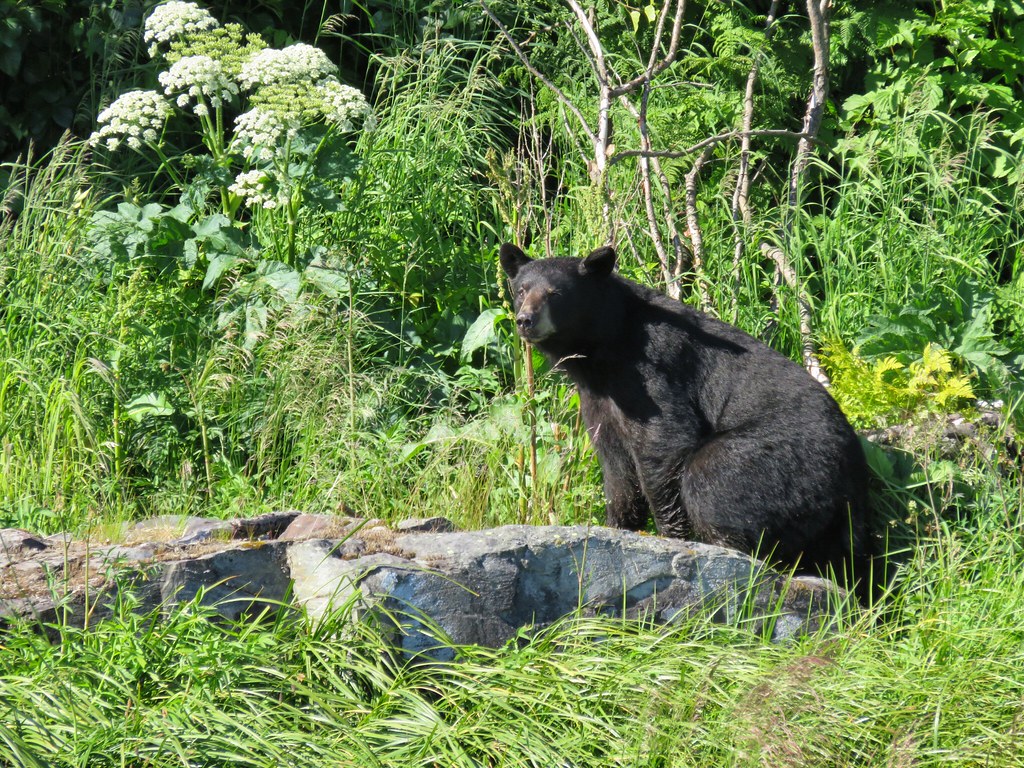 There were numerous places outside town to wild camp, from river side spots to a glacier fed lake with icebergs floating in it. Amazingly the later seemed to have its own weather front from the glacier and we had a freezing cold night. As the sun set late at night the snowy mountains would stain a beautiful pink colour and we started noticing faces in the rocks and snow. It became quite a fun game; we had Jesus, another bearded chap who looked like an explorer and a man with a big parrot nose and giant ears like a caricature. Oh the fun you can have without a tv! 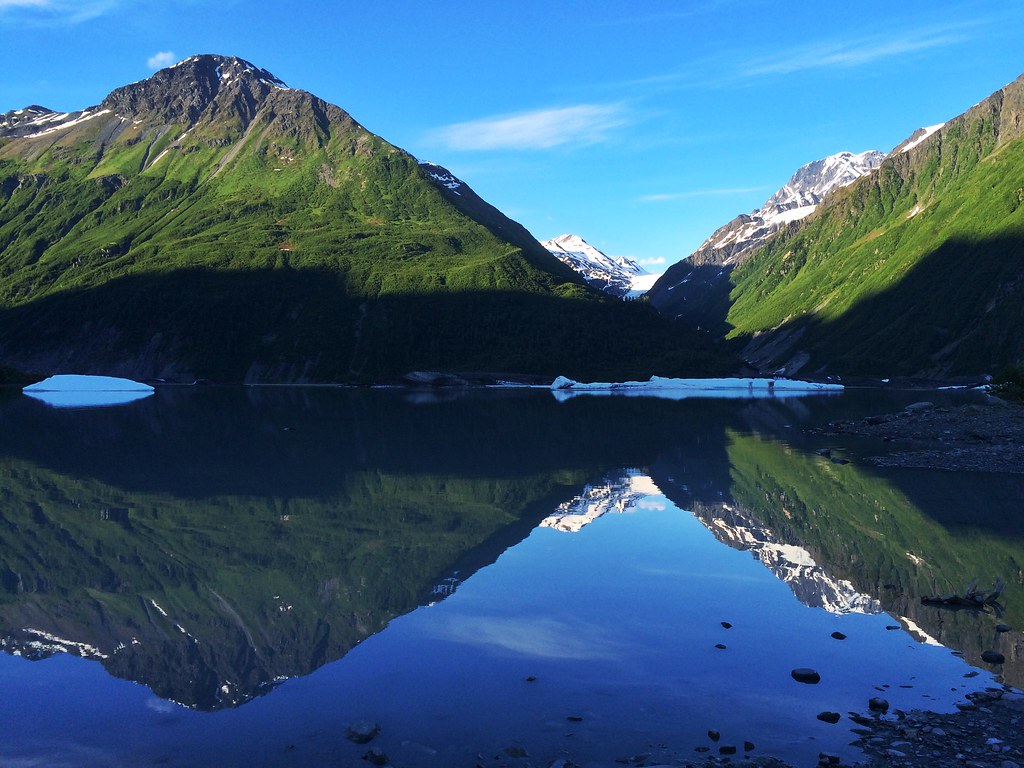 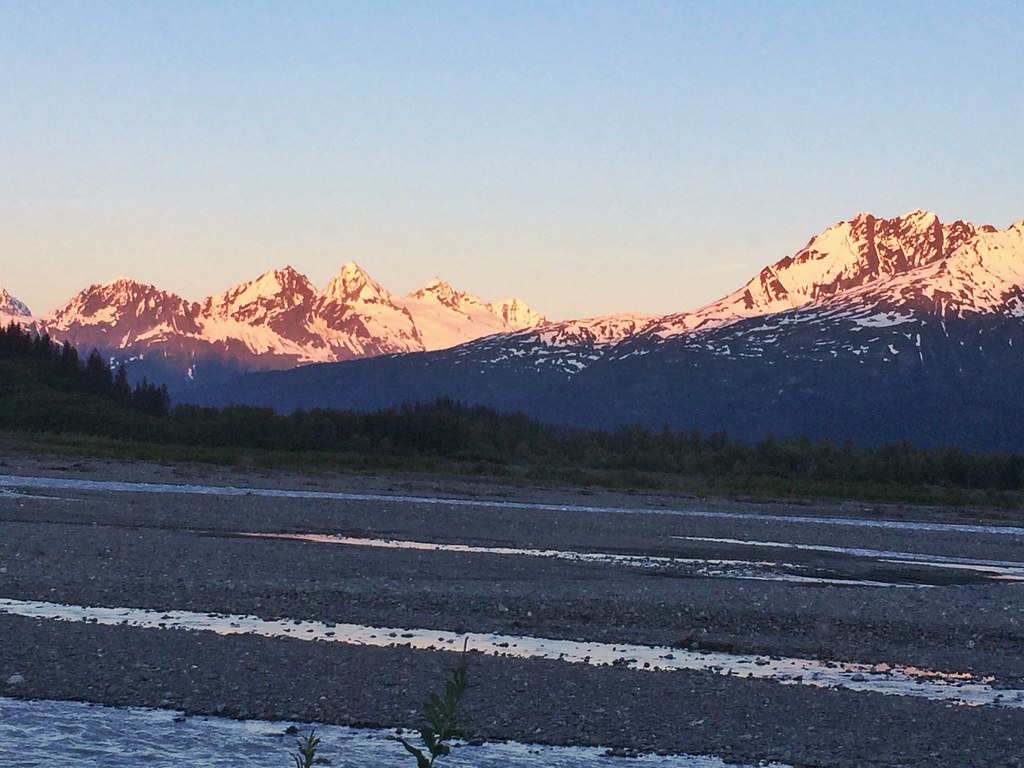 Throughout June a campground in Valdez feeds the wild bald eagles. I don’t quite know how they got permission to feed wild animals but alas, we went along and it proved to be quite an impressive show. There were about a dozen eagles gliding effortlessly above us. Pieces of fish were waved in the air by the man in charge and thrown down where eagles swooped low and grabbed the fish in their claws. Seagulls hung around trying to get lucky and would usually have to make a frantic dart out the way of a speeding eagle who’s wing span is 6-8ft! As I looked up in the sky at their perfect feathered wings, neat white heads and bright yellow beaks I remembered a story we were told. Funny enough it was based in Valdez and made it into the news papers. A couple of RV’ers pulled up to get some gas, the lady wandered around the parking lot with her dog while her husband filled up. It was one of those tiny handbag style dogs, and a bald eagle saw it as easy pickings and to everyone’s amazement flew down and picked up the dog. One yelp and he was done for, taken up into a tree for dinner. The lady was screaming and totally distraught. The husband went to quickly move the RV as it was blocking the traffic before comforting his wife …but as he went round the back of the RV a spectator saw him raise his hands in the air and start whooping with joy out of sight of his wife!!! Obviously not quite a fan of the dog like she was. 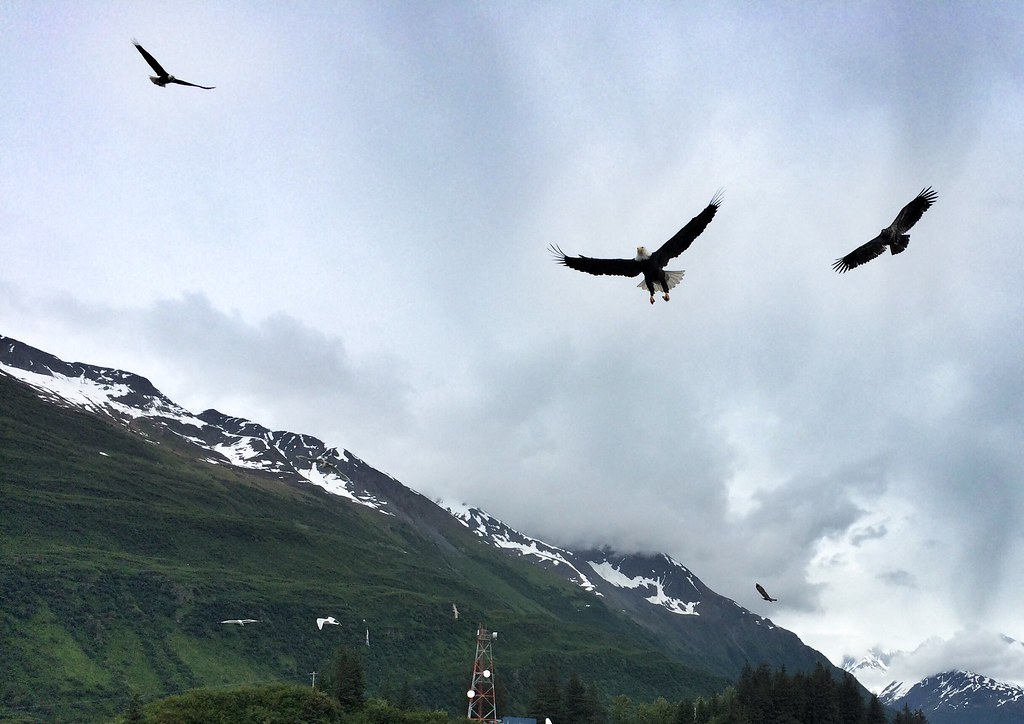 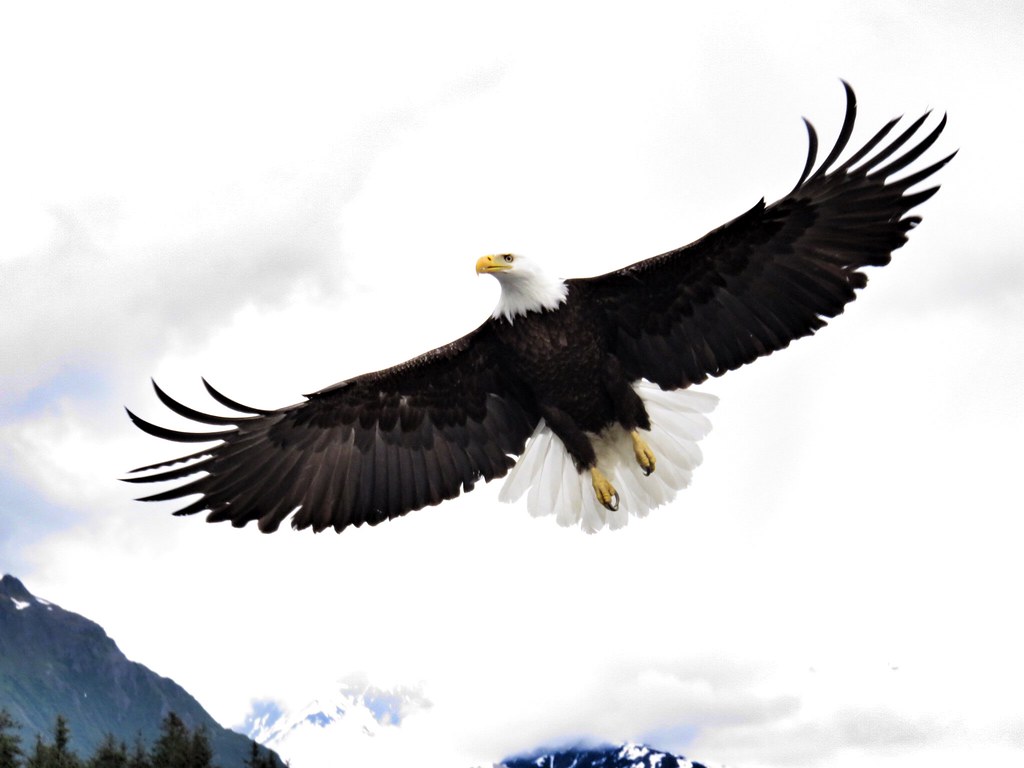 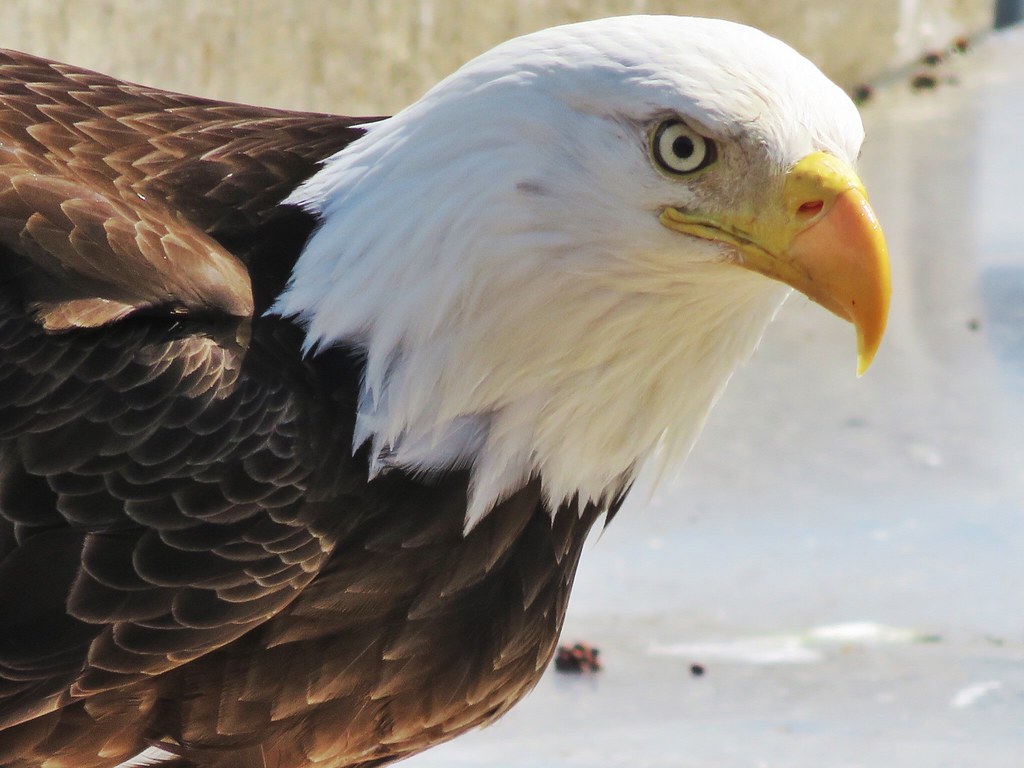