A lot of people have read or watched Into The Wild and it seems they either love Chris McCandless’ adventurous spirit or think he was utterly stupid for going into the Alaskan Wilderness totally unprepared. To sum it up Chris left home in Virginia, gave his $25,000 college grant to charity and set off to explore America. When his car got wiped out by a flash flood he hitch hiked his way all the way up to Alaska where he asked to be dropped off in Healy. Nearby an old disused miners road named the Stampede Trail goes parallel to Denali National Park into the wilderness. This is the route Chris took with nothing but a bag of rice, a rifle and a foraging book. He had two dangerous river crossings and after 28 miles ended up at an abandoned 1940’s bus which he decided to set up camp in. He lasted just over 100 days in the wild before he ate a poisonous potato seed and died in August 1992. His story has become famous and the bus, which Chris referred to as the Magic Bus, still remains in its original place and has become a bit of a pilgrimage sight for young backpackers.

It was far too wild of a hike for us to attempt; a Swiss girl sadly died crossing one of the rivers and with my clumsy footing and doggy-paddle swimming technique there wasn’t a chance we were going to risk the challenge. The first few miles of the road were paved so we decided to head up and then continued a few more miles along gravel. We were instantly chuffed that we’d come to the area as it was beautiful. There were the snowy peaks of Mount Healy to our left and flat tundra on either side of us. It was the perfect location to camp and look for wildlife so that’s exactly what we did. 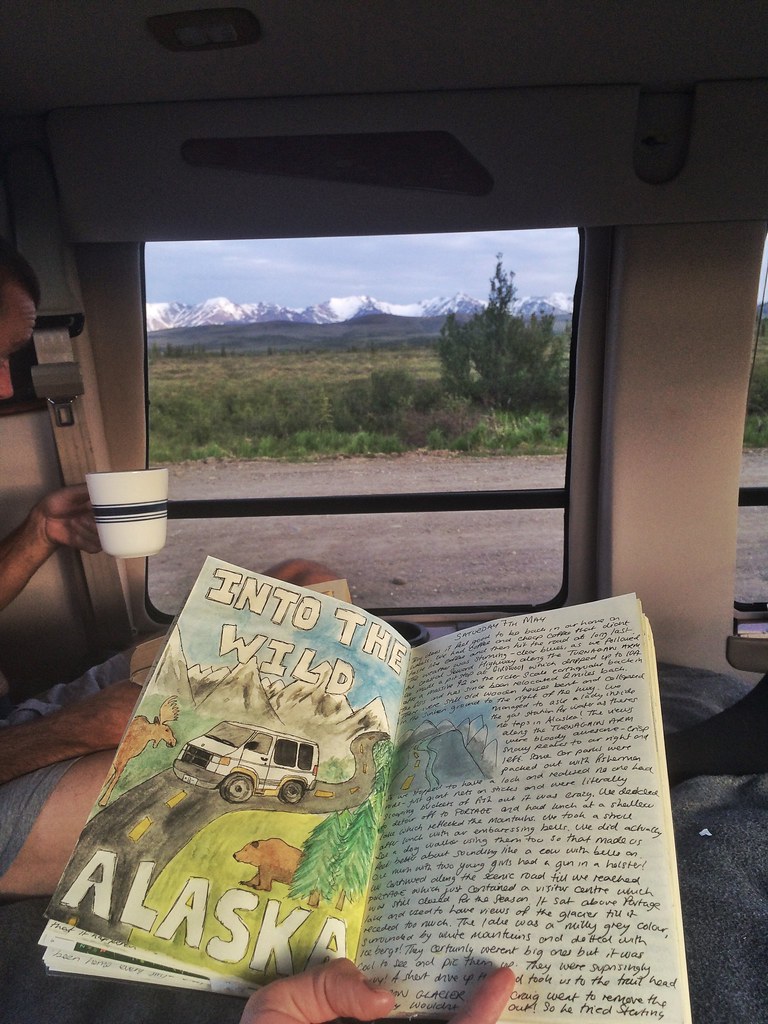 We ended up staying two nights along the road as it was so tranquil. We had beautiful warm weather, never ending sunsets and a hell of a lot of mosquitos. Craig relaxed in the sun while I spent the evening painting my journal. 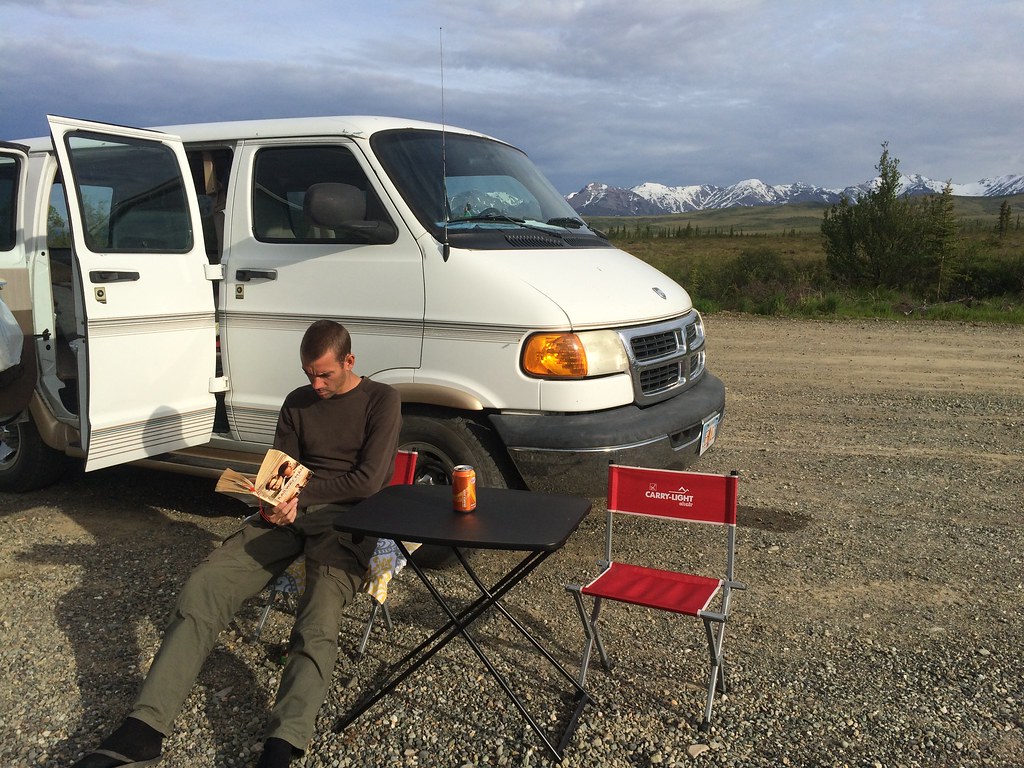 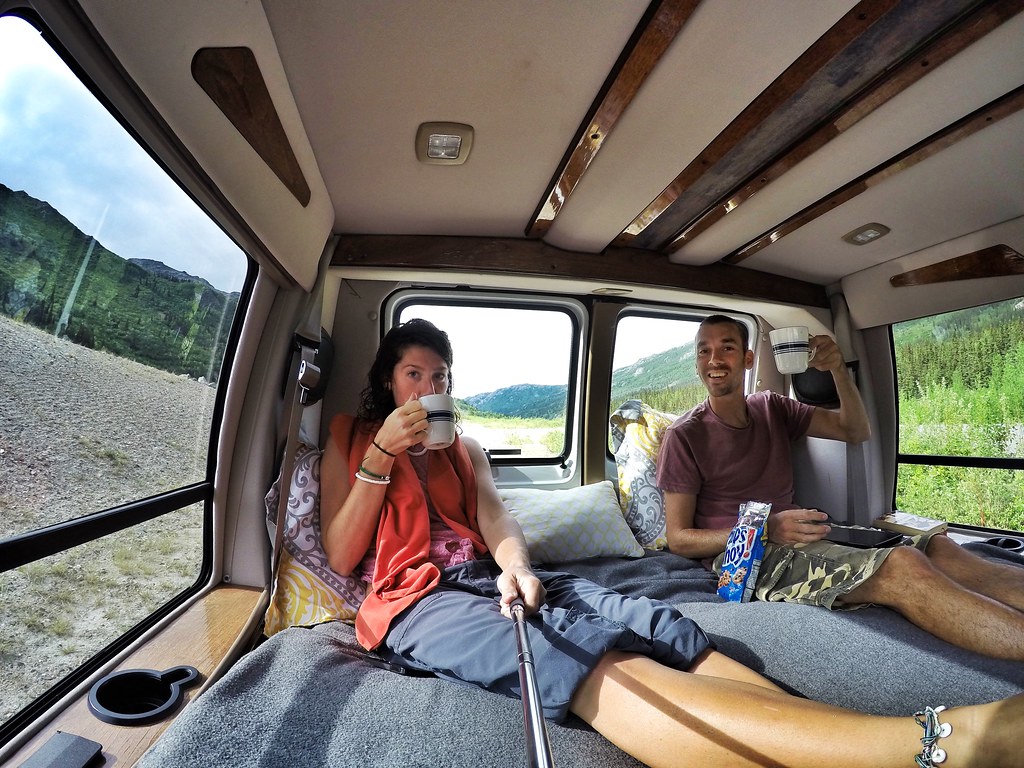 We could see a lake from the road and followed some wooden planks to a couple of people doing research work, they suggested a route to the lake so we headed off. It turned out to be a bit of a nightmare walking on the tundra. It was like a mix of hard and soft pillows covered in grass and surrounded by moats of water. We were falling all over the place and bouncing on the spongy terrain like we were on mother natures bouncy castle. After a while the lake seemed as far away as when we began and we decided to give up and head back. Kudos to Chris for making it 28 miles on this frustrating terrain. 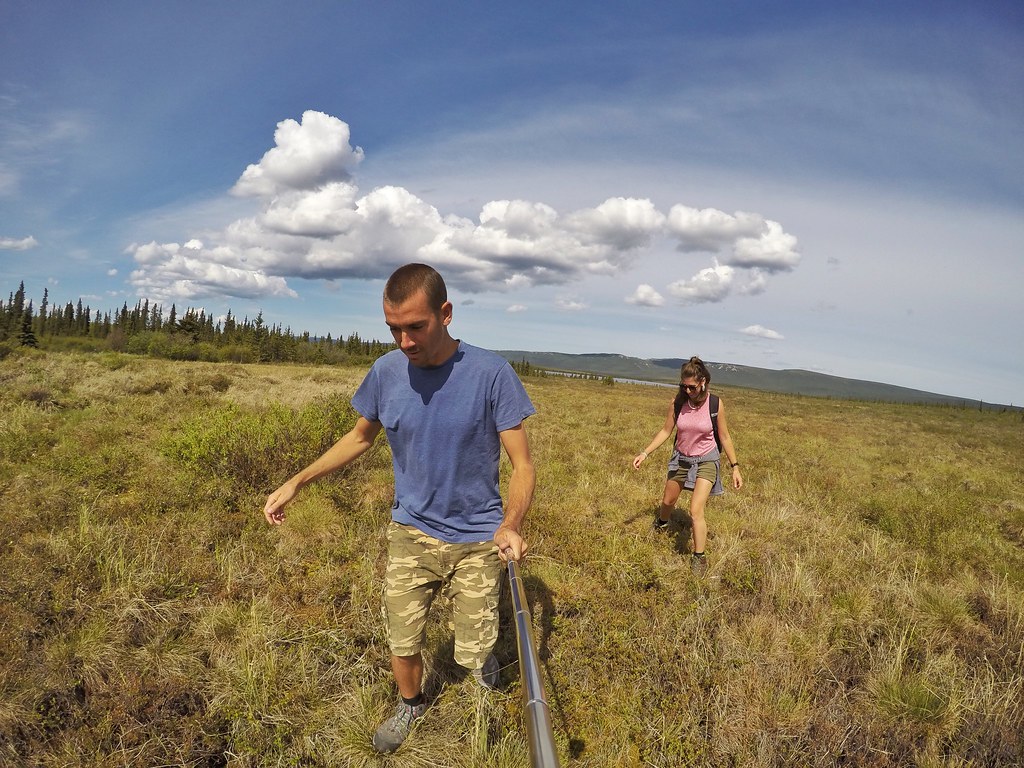 The 49th street brewery in Healy had a replica of the magic bus outside so we made sure we visited. It was so similar to the real one that I was confused and had to research online if the original bus had been moved there. I’d read a lot of talk about locals wanting it moved, the dangerous route to the bus causes a few search and rescues every year, plus the bus is getting vandalised with parts even being sold on eBay which is such a shame. I found out that this bus was in fact the one from the movie! It was awesome, and totally rustic inside with battered wooden floors, smashed windows, a lovely big wood burning stover, springy mattress and long counter top. It was the perfect little camper. There were framed photos that Chris had taken of himself, from the classic one of him sitting outside the bus to him holding freshly killed porcupines, buckets of berries and random plants he’d foraged. Along with the photos were snippets from his diary, mainly key words like the weather, animals seen or killed etc. We really enjoyed having a snoop around a perfect replica of the bus which housed a young man in his last days and has always been there for locals if they got stuck in the area. 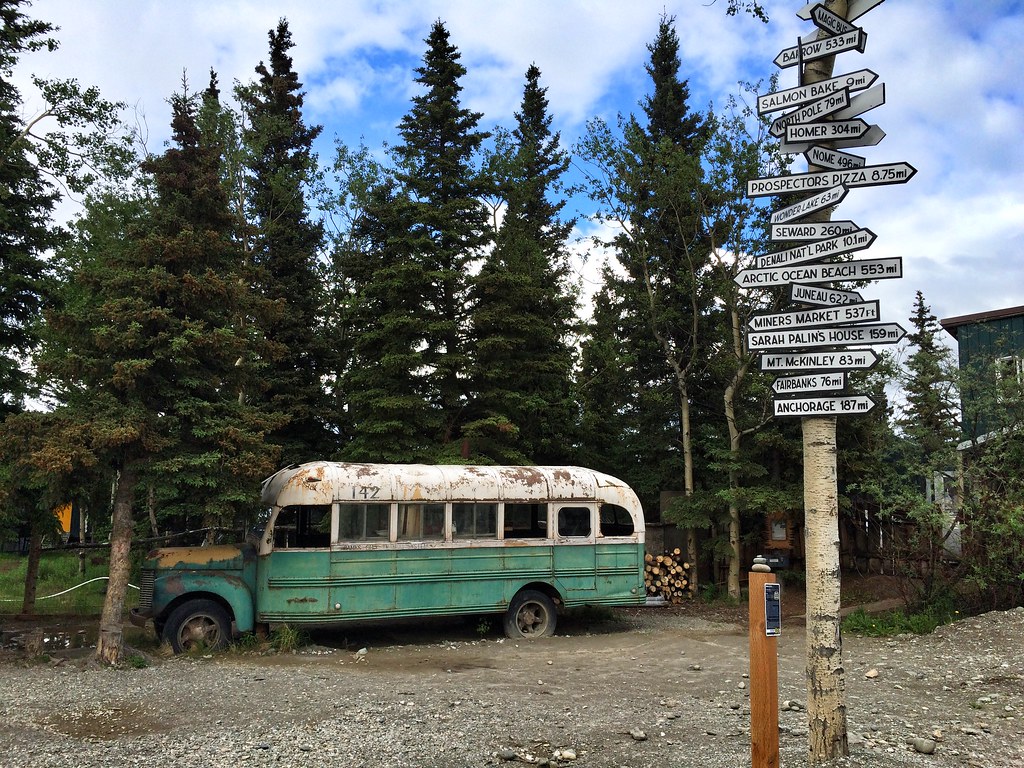 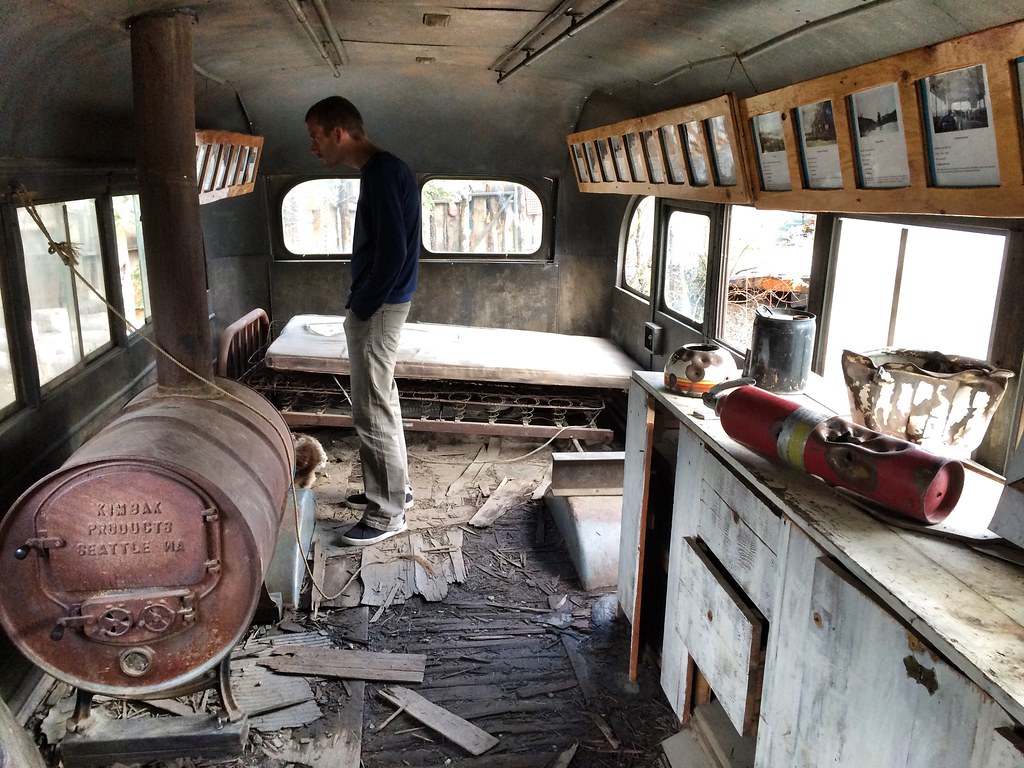 I’ve since been reading articles online and the book has actually been criticised for saying its a true story when really the author made of it what he wished out of Chris’ few key words. Alaskans are angry for him basically setting out for failure and leaving someone else to clean up the mess. Which I get. I don’t think his body was found for four months. They also hate that he let so much moose meat go to waste due to flies. To be fair he said something in his diary along the lines of it being his biggest regret in life. He tried smoking the meat but it was to no avail and there was a hell of a lot of good meat that went to waste. On the other side, if I were starving in the wilderness (and not a fussy eater!!!) I would probably kill first (probably couldn’t even do that) and by the time I’ve come out of my food comma flies would be around the meat and it would be too late. Anyway, I found the debates and articles rather interesting and I can see both sides of the story. But I can’t help but love what Chris did; who the heck just gives $25,000 to charity and sets off to live on natures bounty in the wilds of Alaska. To survive 100 days is an impressive feat in my books, I can’t even go without lunch.