As we left the Denali area and headed north we felt like our chances of seeing a bear outside the park were impossible. We’d seen how camouflaged they were in the wilderness and we’d also seen them up close and personal walking beside our bus. They just don’t act like that outside the park where they’re in constant danger of hunters. So there we were, sure we wouldn’t see another bear in Alaska and suddenly we were 2 meters away from a black bear. But this bear was dead, slung onto an ATV on the back of a guys pick-up truck that was currently overtaking us. We couldn’t quite believe our eyes. That poor bear.

Further north we reached Nenana which has become famous due to the ‘Nenana Ice Classic’; a competition that takes place every year and people put bets on when the frozen river will break up. A giant tripod is placed on the frozen river with a flag atop which is connected to a stopwatch and will reveal the winning time. It only cost $2.50 to enter and I think this year the winnings were $300,000 split between however many winners. I couldn’t resist a guess so we’ve tried our luck for 2017, apparently we can keep track of the rivers progress via a webcam. How riveting! 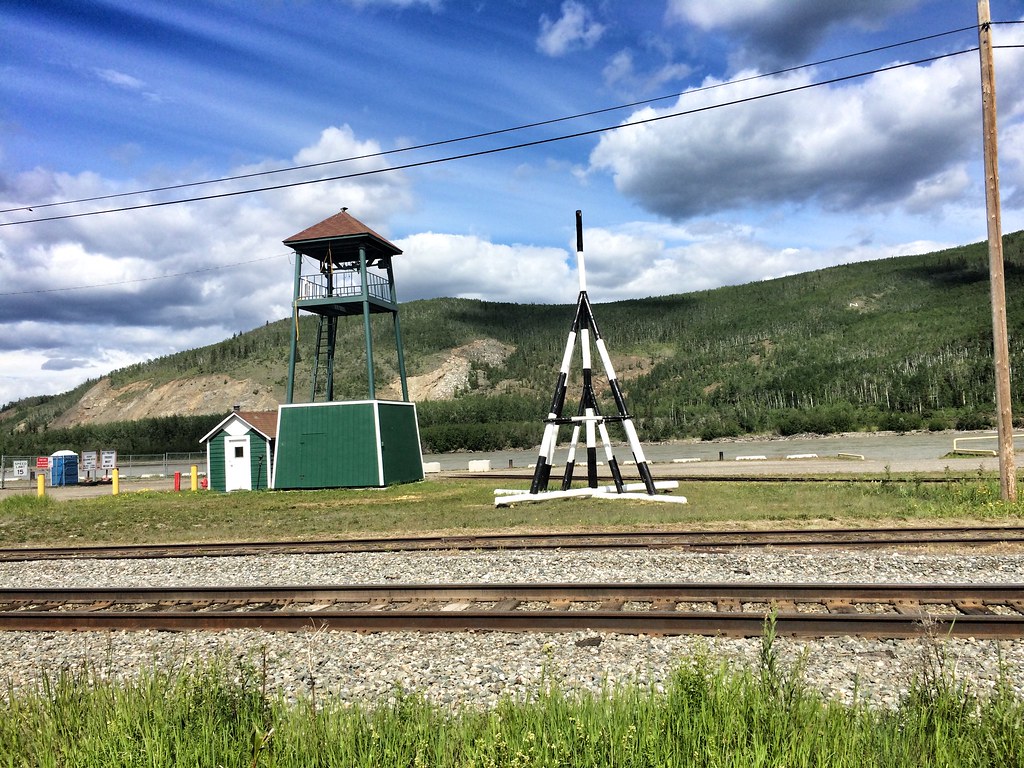 Nenana also had a husky sled team with 12 adorable puppies so we went over to say hi. Two men welcomed us and opened up the pen to reveal the pups. They were between 4 and 6 weeks old and all 12 were bundled into a corner and piled atop one another. As soon as we stepped in they started unraveling themselves from the puppy pile and coming for us. We were surrounded by husky puppies and they were all pooping and peeing with excitement. One lost its energy very quickly and just lay next to me while our favourite one stuck by my side and loved being stroked. He had one blue eye and one brown and some yucky poo on his butt, rather unfortunate. 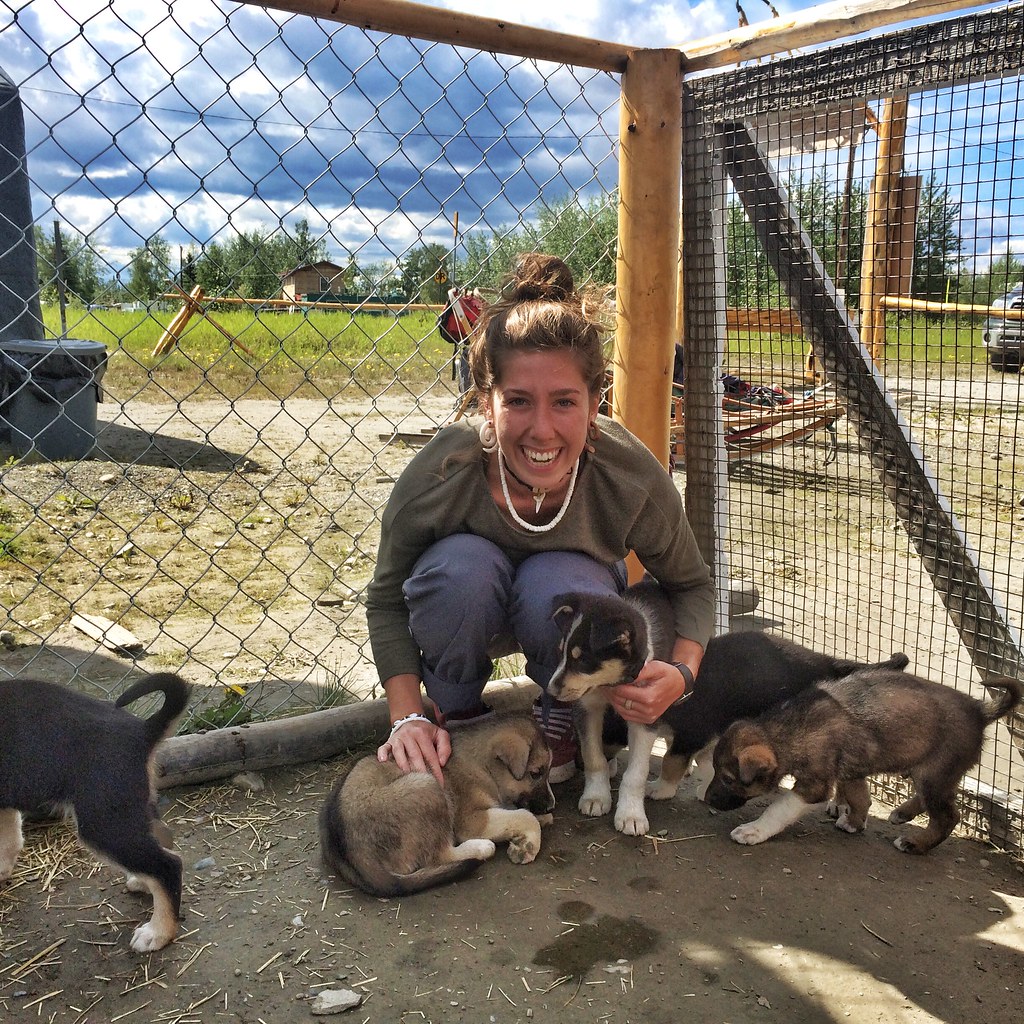 We got chatting to the two men and one of them turned out to be a bit of a legend amongst the dog sledding world. His name was Gerald Riley and was the first native to win the epic Iditarod race in 1976. Its about a 1000 mile race through the snow-covered Alaskan wilderness. Soon after his win he was actually the one to start up Alaska’s other big sledding race, the Yukon Quest. He’s come second twice in that race and sure had some tales to tell us. When I asked him to pose with Craig for a photo he obliged but straight after said to swap so he could have a photo with me, he looked a lot happier in that photo!! He was an interesting man to meet and I was quite surprised to hear there’s big money prizes for winning the race, to which Gerald said “well we sure don’t do it for fun”. I thought that was a bit sad and I’ve sort of seen the race in a different light since browsing online and finding information about animal cruelty amongst the racers. Back in Gerald’s winning days it used to take around 20 days from start to finish but of late that times been cut in half, putting more pressure on the dogs. It’s an Alaskan, well Arctic tradition and I love it but if it’s not for fun and there’s a big money pot at the end then it seems like a lose lose situation for the dogs who suffer from bruised and lacerated paws, damaged lungs and possible beatings. It was quite interesting to read more about it and I kinda wish there was just a trophy and fresh dog food waiting at the end and the pride of taking part as appose to thousands of dollars to be won. Still, I enjoyed chatting to Gerald about his races and loved how he said they wear animal fur around their heads like proper Eskimos. 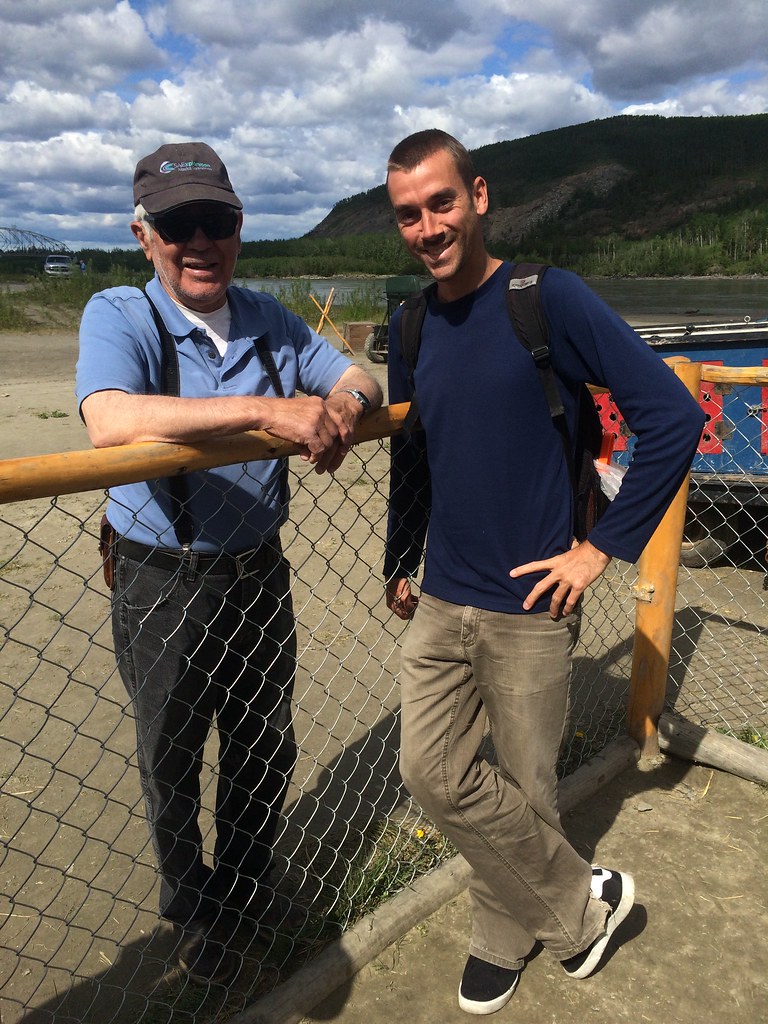 After stocking up in Fairbanks we headed east to a small town called North Pole. To keep in theme with its festive name the town had brilliant road names; Santa Claus Dr, Mistletoe Lane, St Nicholas Dr and Snowball Lane. Not only that but candy-cane striped lampposts lined the roads. We visited the main Santa Claus House which had the worlds tallest Santa statue outside. I was a little disappointed as I stepped inside; we’d been to the home of Santa in Finland’s Lapland which was a magical place, this however had an air of tackiness. I made my opinion loud and clear to Craig as we entered and rounded a corner “it just doesn’t have the class like Finl…..oh, hey Santa” he’d been sat so still that I thought he was part of the room. Oh bloody hell, how embarrassing is this! Luckily he just joked about looking like a statue and quickly offered us to pose with him for a photo. We got some snaps with both of us on his knees, the poor guy. I was going to be cheeky and ask how on earth there were two Santa’s in the world, but I refrained after being overheard slagging off his grotto. 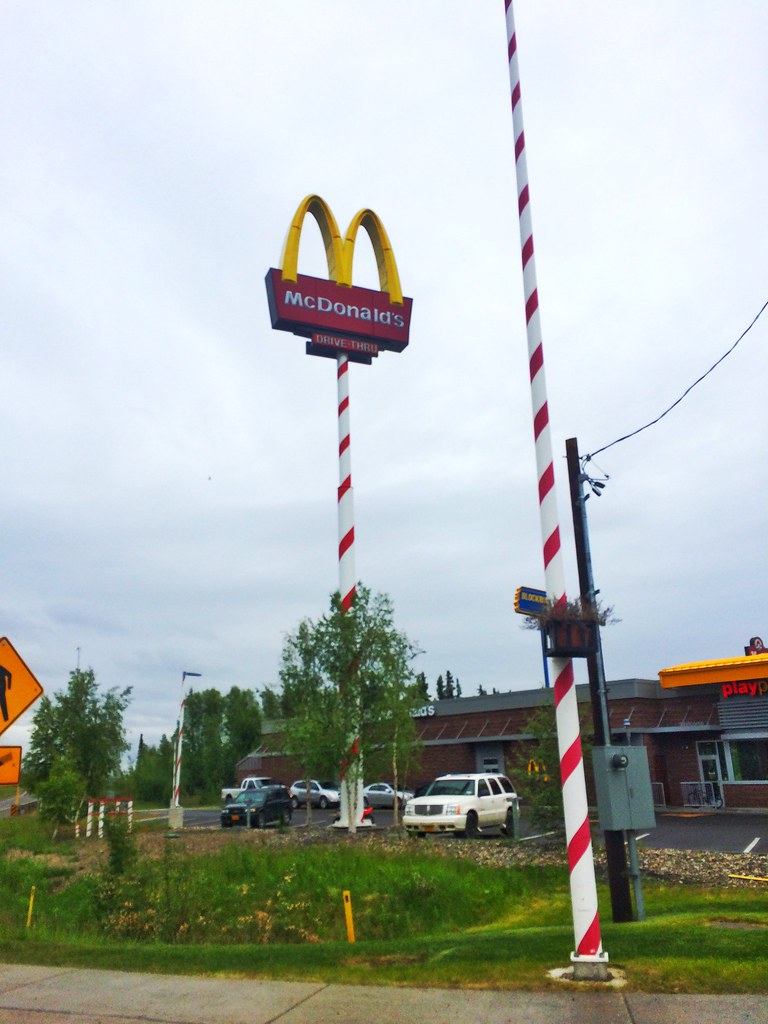 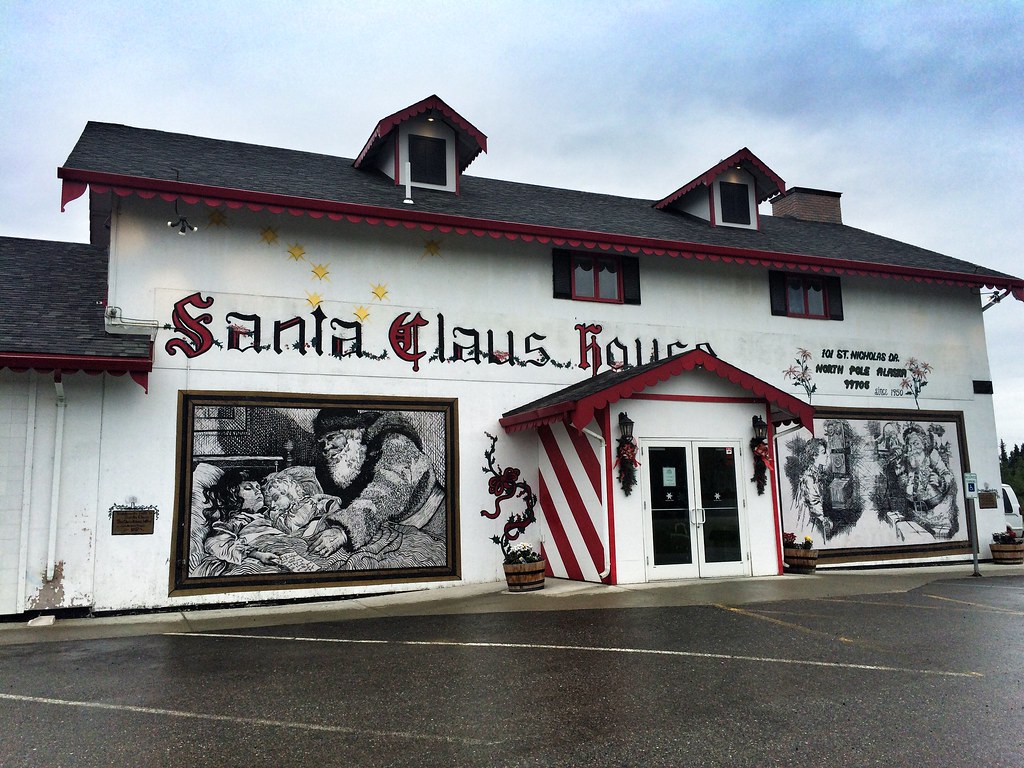 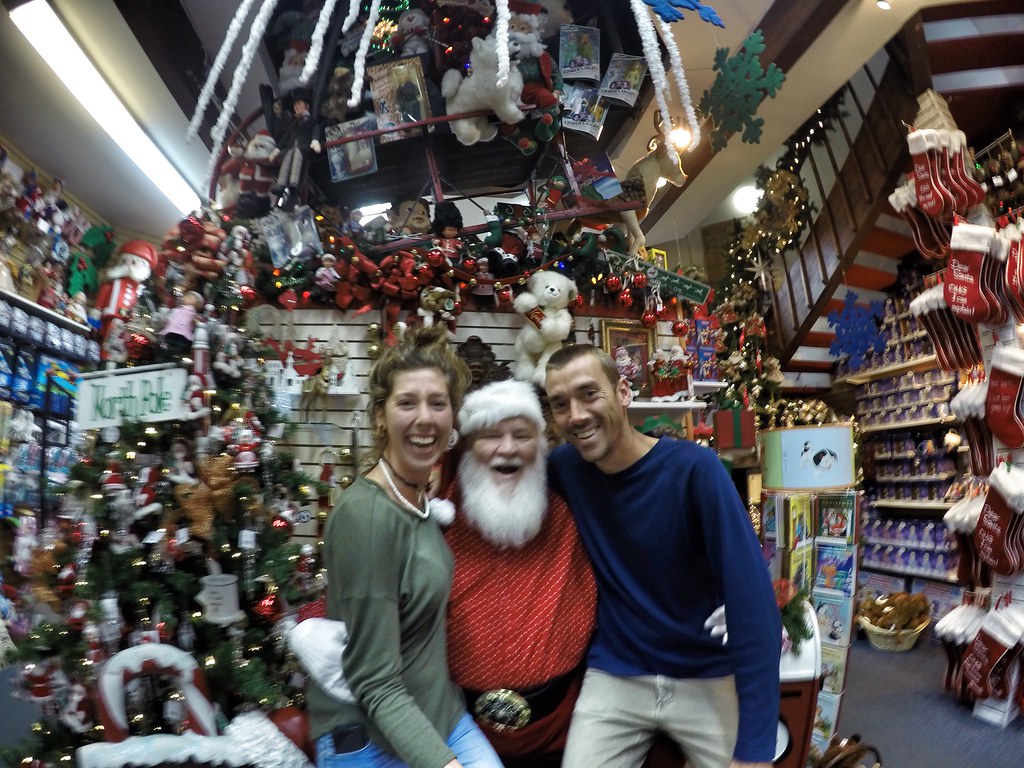 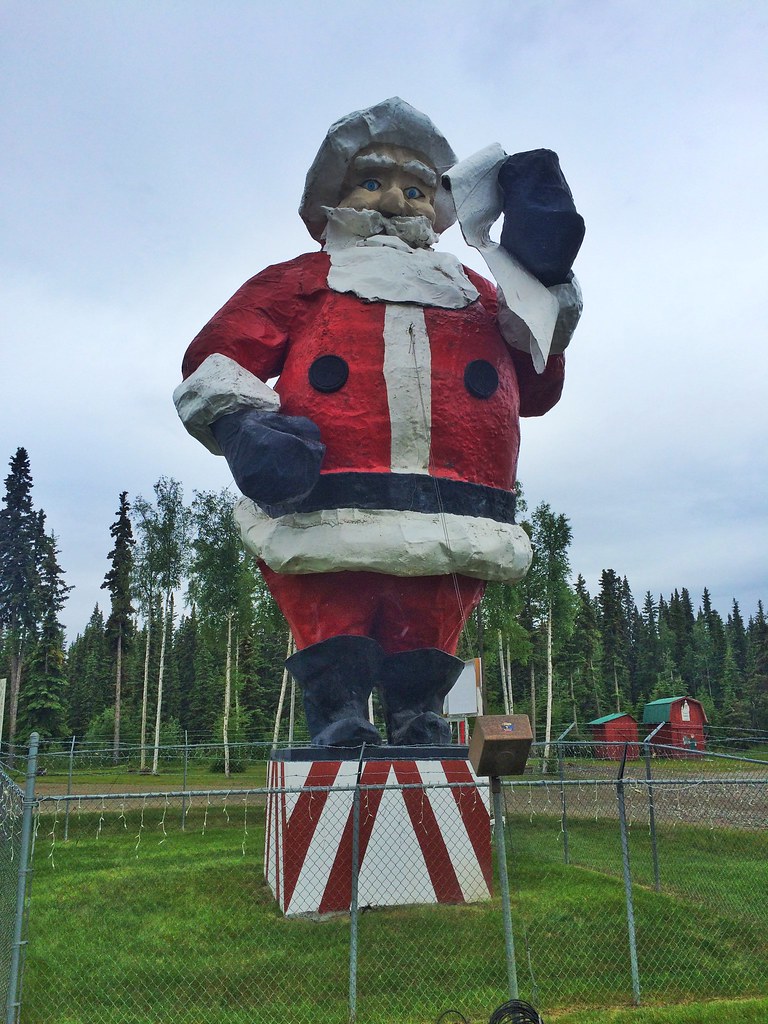