It was our final full day in Denali National Park so we decided to make the most of the buses and try and go up and down the park road twice in a day, about 10 hours travel time to maximise our chances of wildlife viewings. We waited for the bus but the first two were full, this turned out to be a blessing for us as those trips didn’t see any bears. Our lucky third bus however saw not one but four bears! I was overjoyed! A lovely Austrian couple spotted the first one and we quickly got the driver to stop. He’d seen it walk into the bushes so we all scanned the area, I figured it was a lost cause but then we spotted the bear dash through the shrubs and he was moving towards the road. Much to my excitement he came out right beside the bus!! Wahooo! Although we could only see his derrière as he walked up the road away from us. When the bus brakes puffed he turned back and panicked doing a frantic jump and run before settling down again. He crossed the road and hid in the bushes on the other side. It looked like a young bear that had recently been kicked away from its mama. When their about three years old the mum will either walk away from her cubs while their sleeping or be nasty to them so they leave on their own accord. It’s pretty sad but it’s their time to fend for themselves and the mums time to get jiggy again. Amazingly just two minutes up the road we spotted another bear wandering in a rather scatty manner up the hillside. She would occasionally stop, look around, sniff the area, and then hop along not sure which route was best through the shrubs. She was coming towards us but another bus scared her away. The driver suspected that could be the mum of the bear we’d just seen. I was very content for the rest of our ride and even the Dall Sheep were hanging out closer to the road than normal. 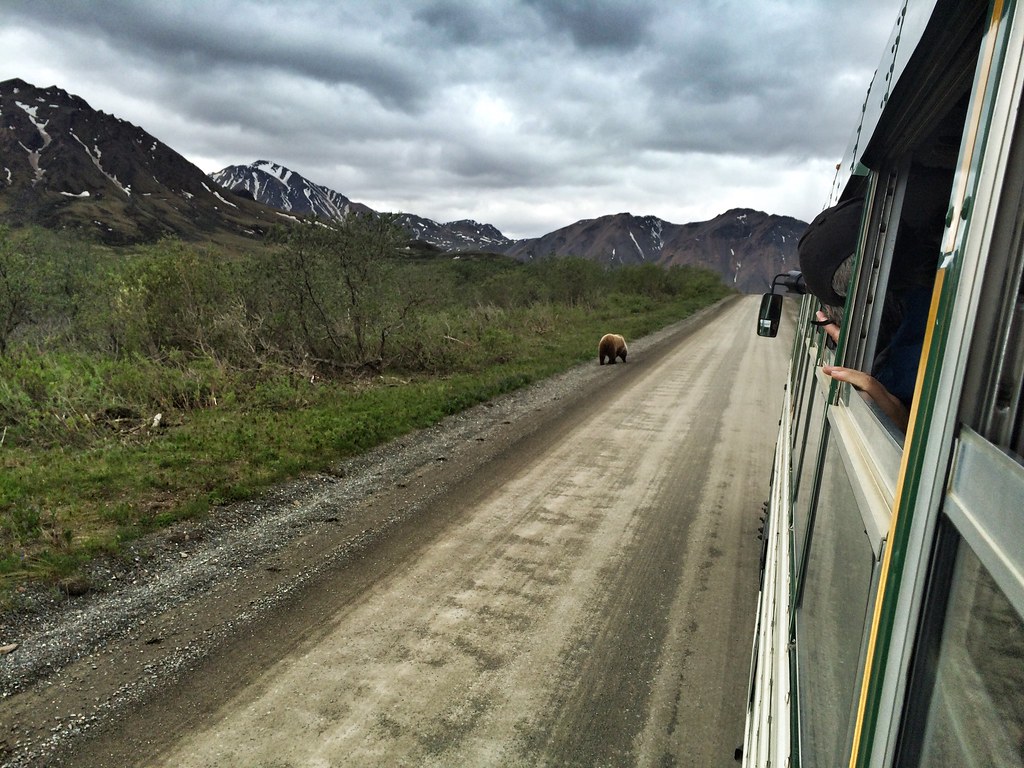 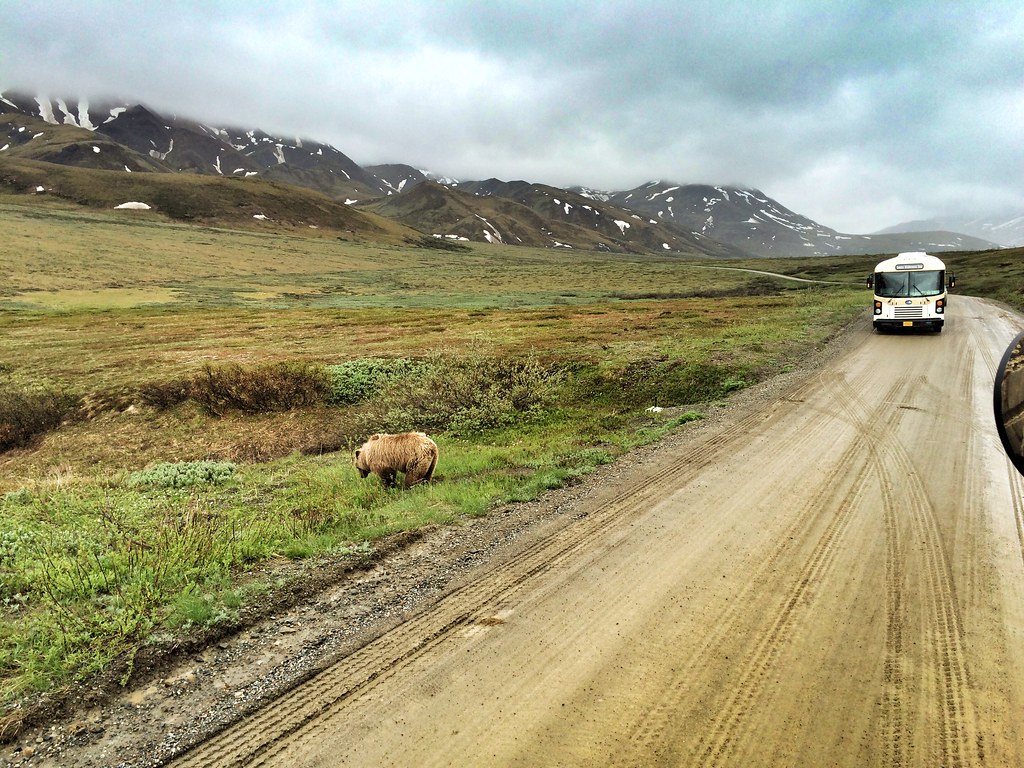 We stayed on the same bus for the trip back and low and behold another grizzly was spotted. A bus had seen it first so we stopped nearby and watched the bear come down the road in-between the two buses. They really are unfazed by the traffic along the Denali road it’s quite amazing. Once the bear reached the other side it grazed on some grass and was in its own little world looking down into the plants instead of towards our cameras. How inconsiderate! 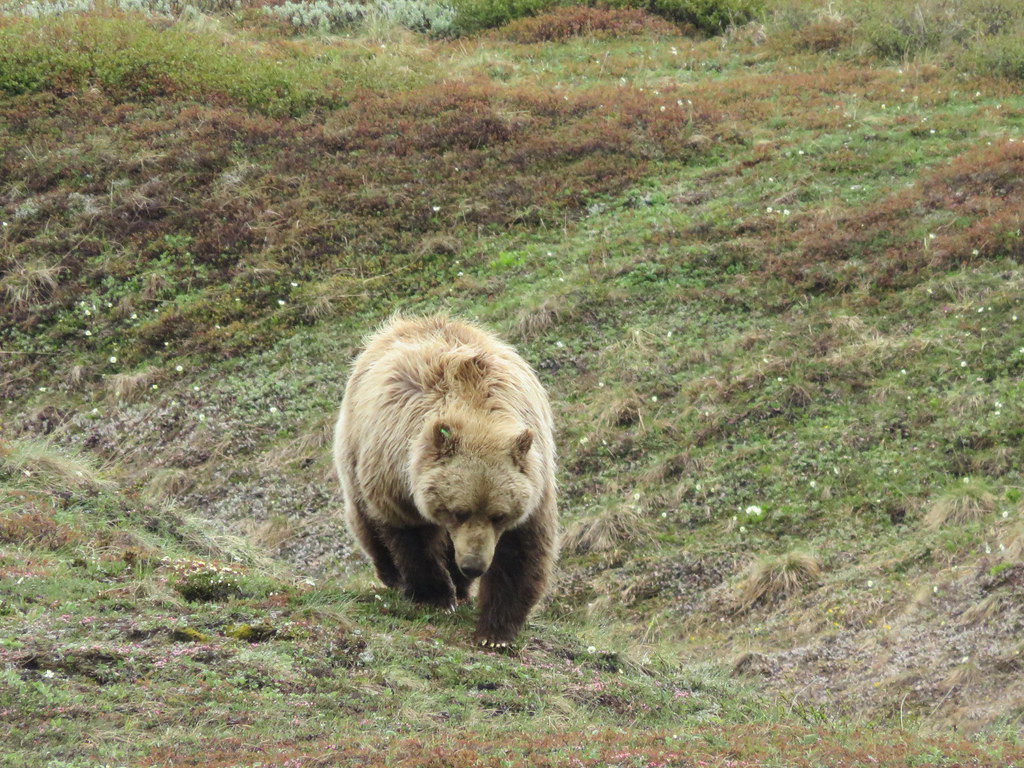 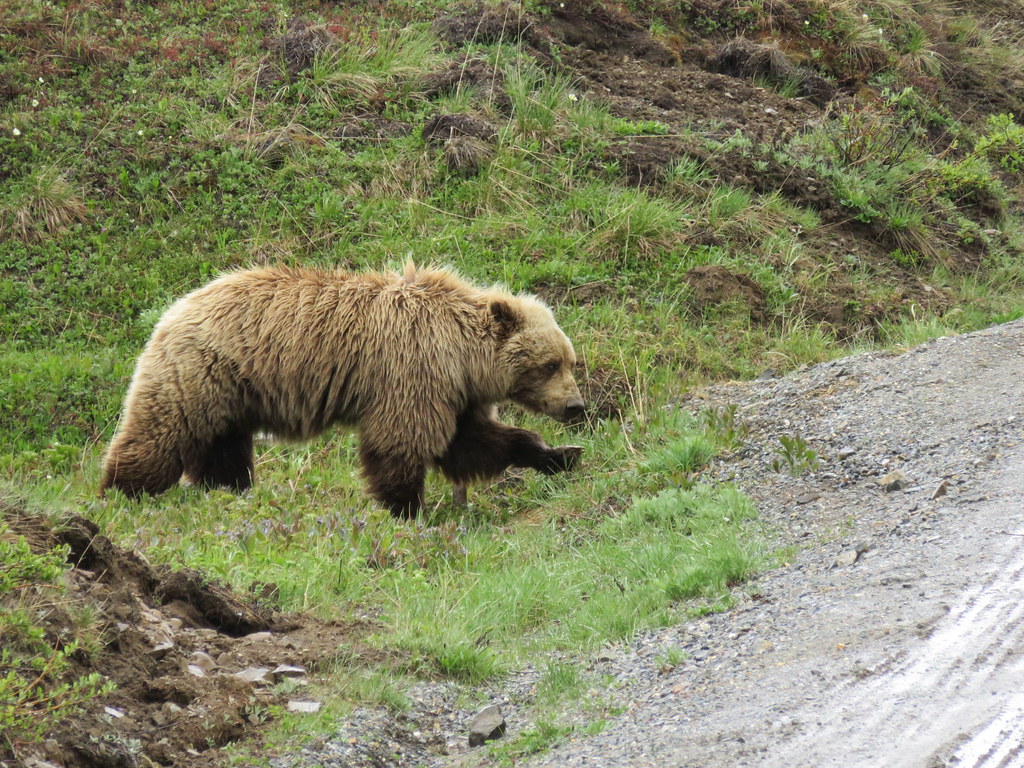 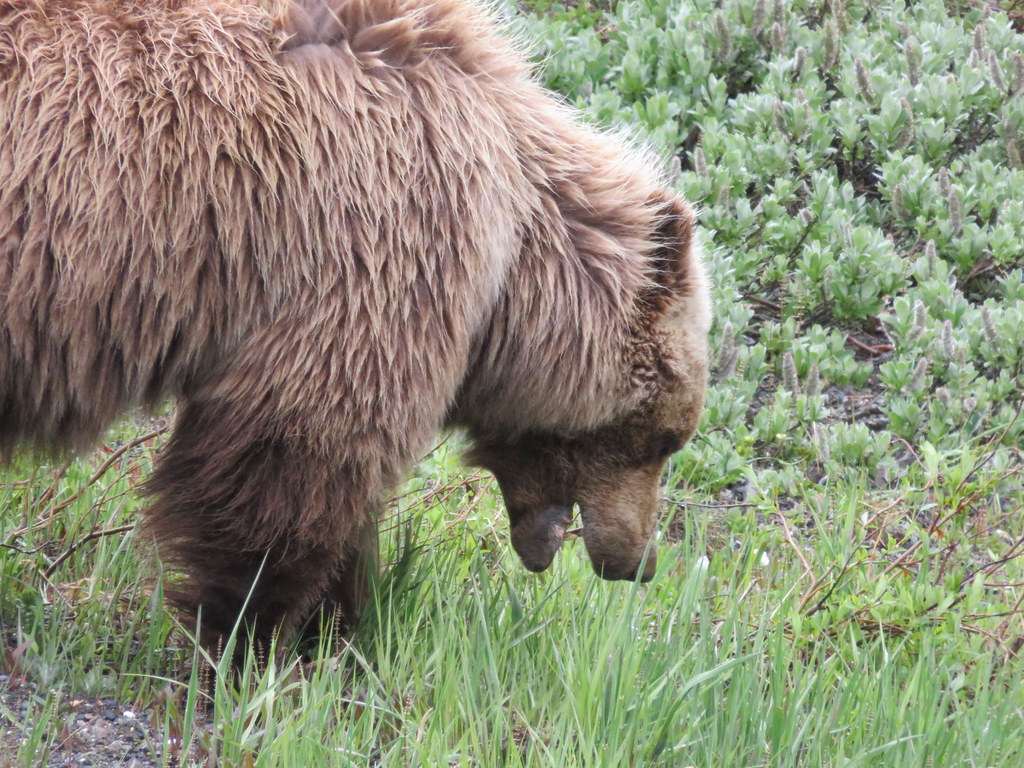 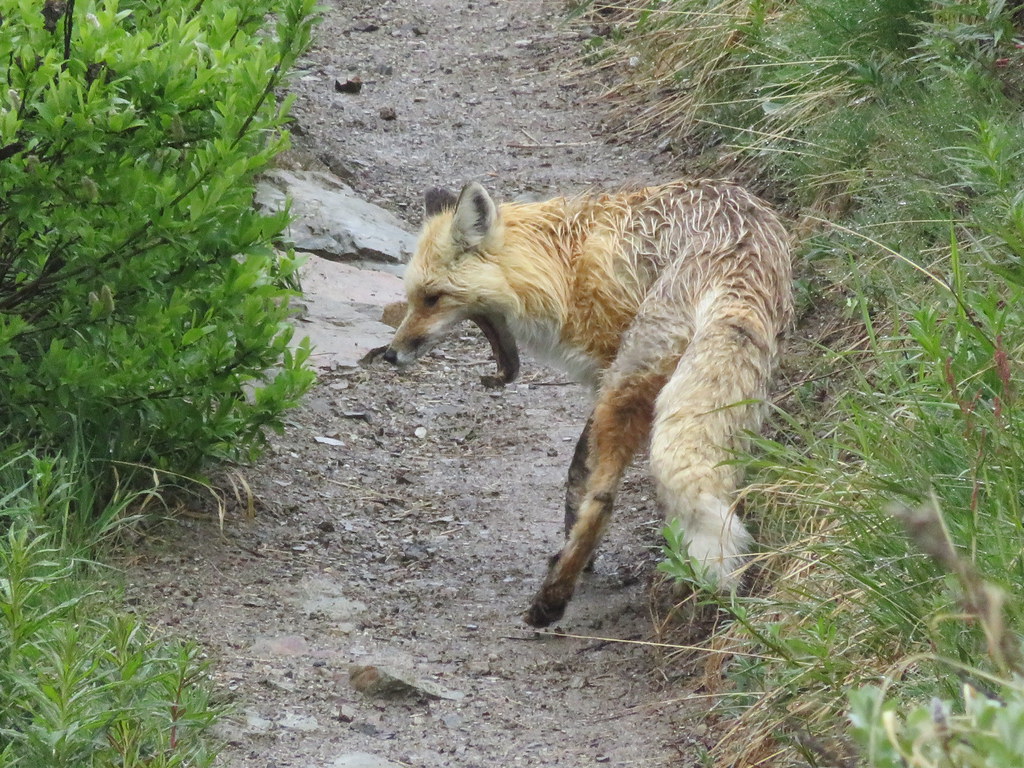 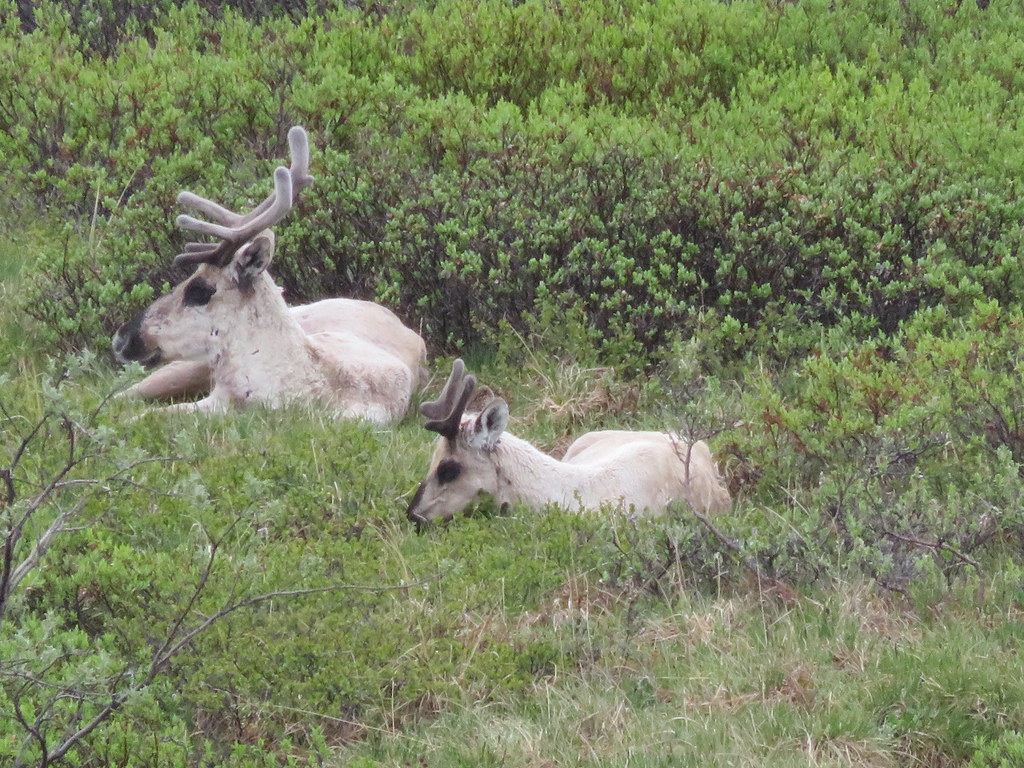 Craig actually spotted the last bear of the day, it was strolling along through the tundra and bushes parallel to us but after having so many amazing encounters we were way behind schedule and the driver couldn’t stay long. What an incredible day though. When we reached our camp it was pouring with rain so we warmed up with a cup of tea and had an early dinner ready for the next bus ride of the day. We figured the bear sightings wouldn’t be half as good as today’s but at least we could sit inside a warm bus as appose to our now very cold van after being parked up at high altitude without sunshine for 4 days. The bus picked us up at 6.20pm and unlike the full morning buses, this one only had 7 people on board. We had a driver who had taken us into the park on our first day. I wasn’t a fan of him. On that first trip another driver gave him a tip-off about 3 bears (it pretty much had to be a mama and cubs) at mile 48.5. We weren’t planning on taking the bus the whole way on this particular day so at the top of Polychrome overlook we asked what mile we were at. He said “about 51, I looked around at mile 48.5 but didn’t spot any Bears” so we headed back on another bus. Well…since riding the bus back and forth it came to my attention that the overlook was at mile 46, the Bears were just 2.5 miles down the road…I was rather pissed off. So here we were, on his bus again. The rain became heavier and as we went over Sable Pass it turned to wet snow, then thick fluffy snow. It was white everywhere; the tundra, hills and mountains were now covered in fresh powder and snow was filling the sky. It was very pretty though and we were quite shocked at the change of scenery in just a few hours. We kept a look out for wildlife and chatted to the people onboard who’s first time it was on the bus. We were saying how great it is sitting on the left side along the Polychrome road so you can see down the sheer edge. I quickly changed that opinion as we began ascending and were confronted by a small collection of scoria and rocks on the road. Round the next corner was another pile which also contained a huge boulder! It was about 2ft by 1ft and suddenly we didn’t feel safe anymore, the Polychrome road wasn’t fun or scenic, it was a death trap. The driver managed to go around the rocks and then went on the radio to inform someone about the slide. The person on the other end asked what the mile marker was and I knew this driver would get it wrong and I just put my head into my hands as if we were doomed. A worker in a 4×4 came over to talk to us and said the rocks we passed must’ve been fresh as she’d just pushed the others off 30 minutes ago. Not only that but they were clearly confused about which slide our driver had called in now with the wrong mile marker. 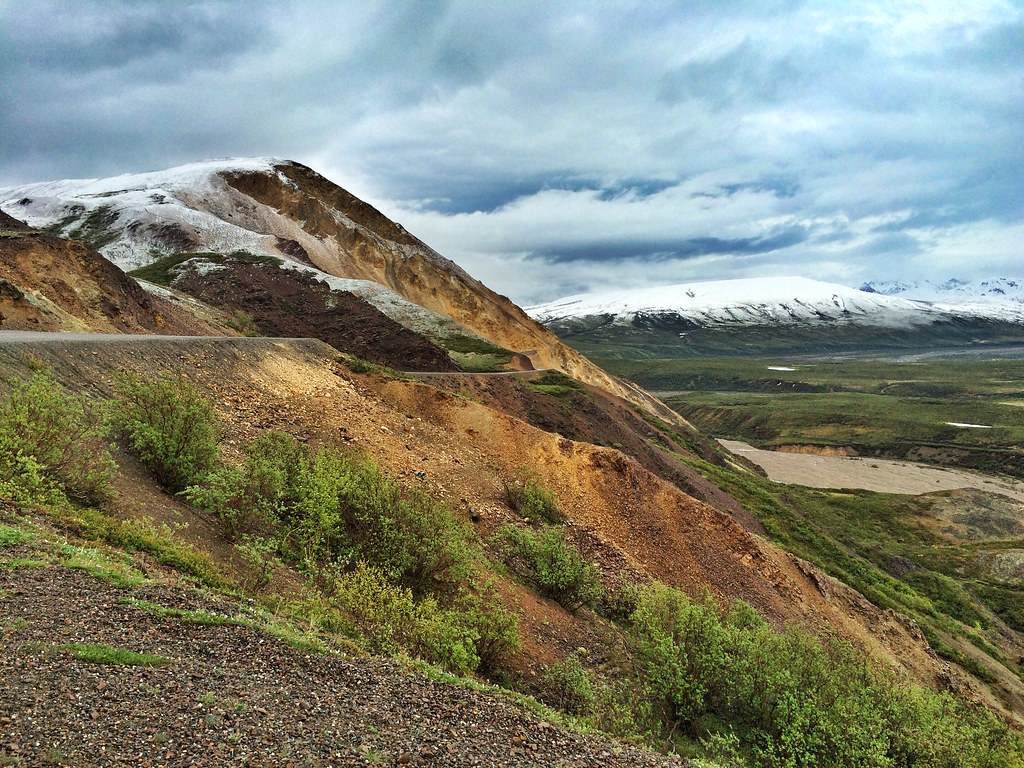 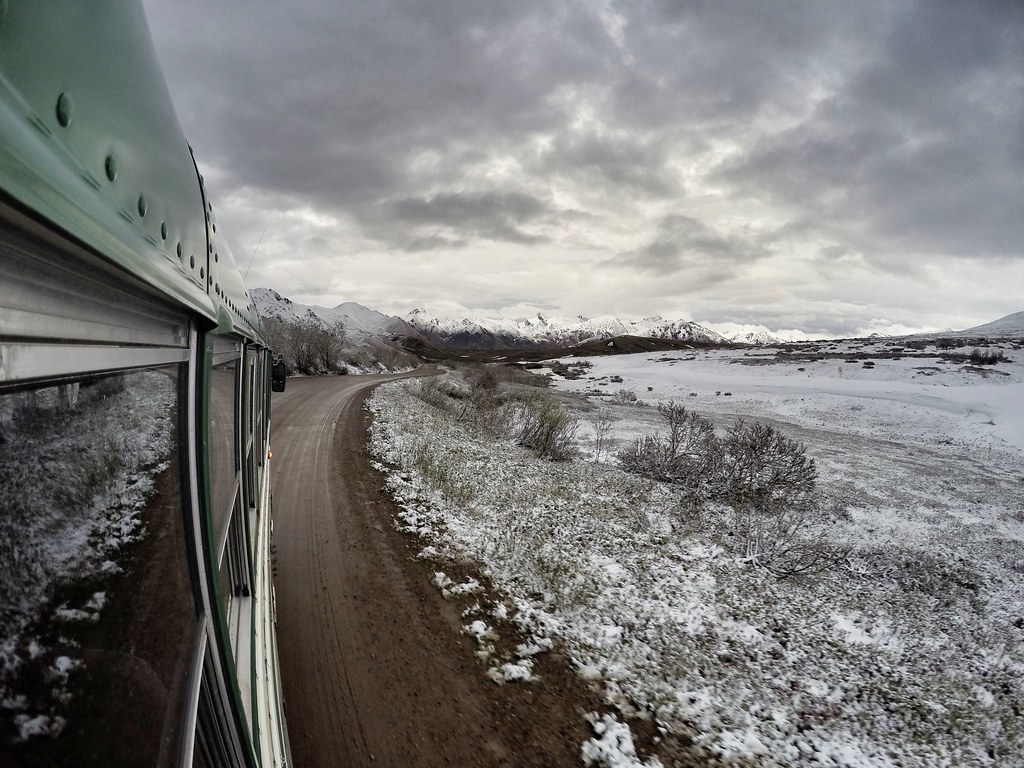 We got to one of the more precarious sections of the road and two grainers or tractors were waiting on the corners. They’d just cleared a slide out of our way so we continued on but scoria and small rocks started falling 5ft ahead of us and we couldn’t stop so had to awkwardly go past and hope no big ones came. It was bloody horrible and I was relieved once we got to the Toklat Rest stop. The weather actually began to clear up which was promising for the route back but first we had to wait 45 minutes before we could leave so we ran to the timetable. The route back was a lot nicer but sadly all we saw was Dall Sheep and ironically the heaters didn’t work on the bus so Daphne would of been much warmer and safer. 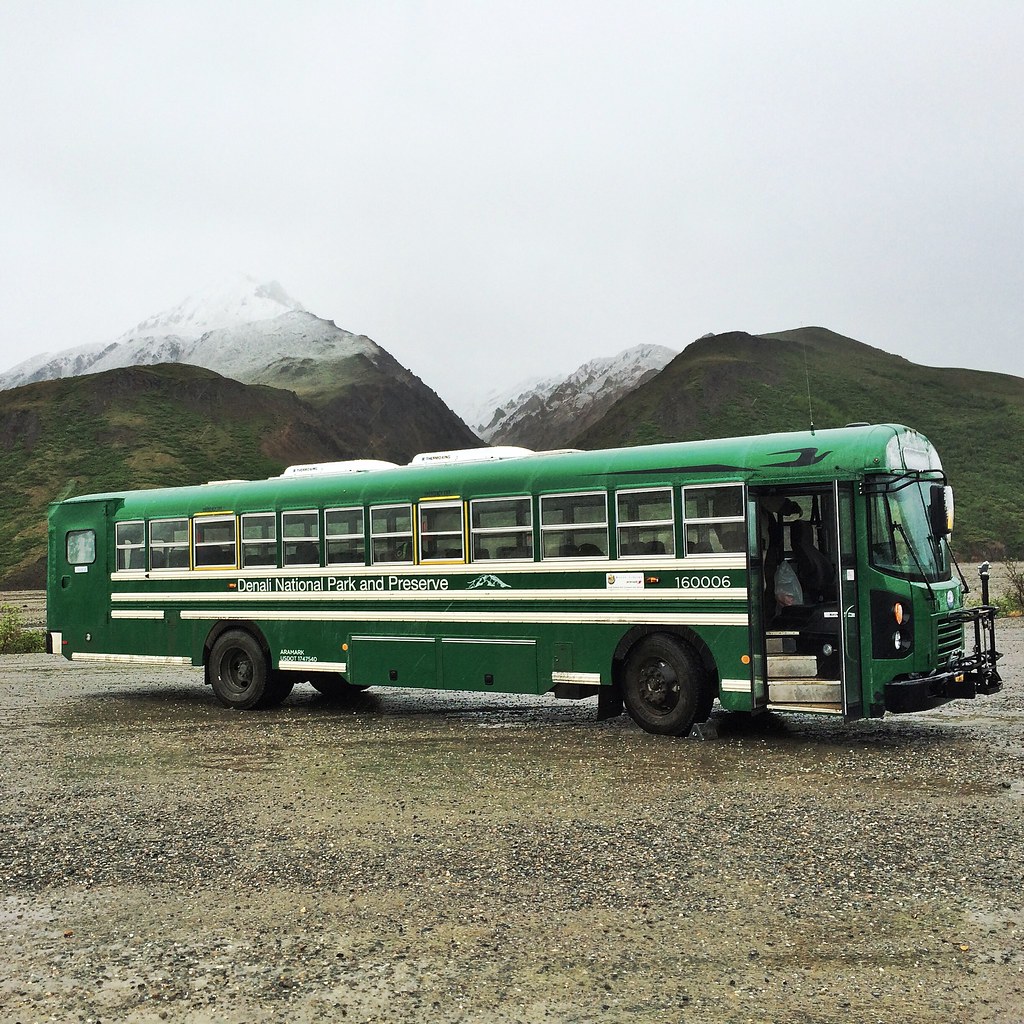 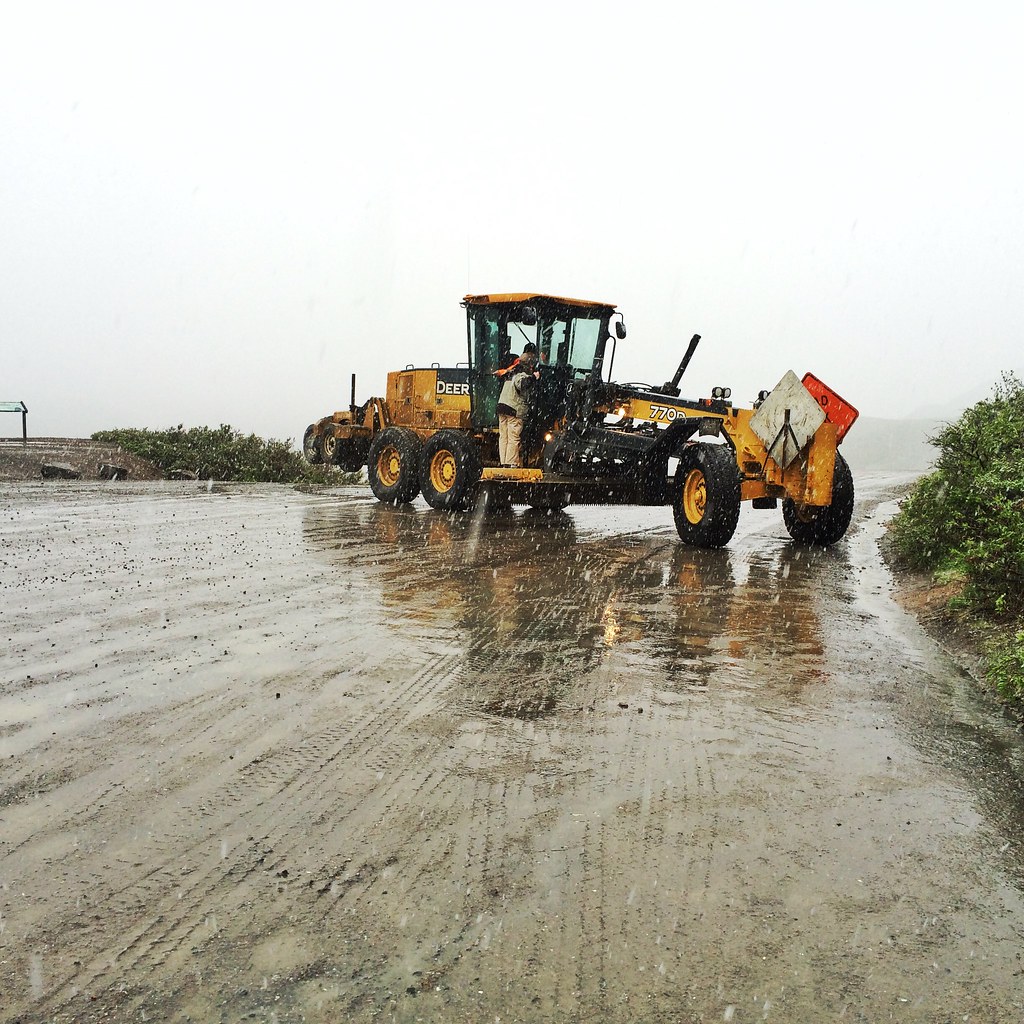 The next morning we checked out of the campground and couldn’t resist one last bus ride and the chance of seeing a wolf or more bears. It was snowing again but felt a lot safer with a full bus, other buses around and being early in the day unlike the eery night bus. It was well worth the final trip as we saw a bus parked ahead of us along the Sable Pass. A stopped bus means wildlife and if it’s stopped a while it means there’s a bear. And right we were, a small bear was walking past that bus and coming towards us. At last, a bear walking our way where we could admire it’s beautiful face and not its wiggly butt. It’s fur was dark and wet from the snow and it casually walked alongside us just 3 meters away. When he passed us he crossed and headed for the Sable Pass wooden signpost. It was covered in spikes to prevent Bears chewing and destroying it and this little bear was having a great time scratching it’s back on the spikes. It was rolling on the muddy ground with all four legs in the air and sort of swung its body sideways to look right at us. What an amazing sight and the icing on the cake for Denali. While in the park we ended up seeing 9 bears, 14 moose, hundreds of caribou (one day we saw a herd of over 70), far too many Dall Sheep that we ended up calling them dull sheep, a fox and a coyote. Thumbs up to you Denali. 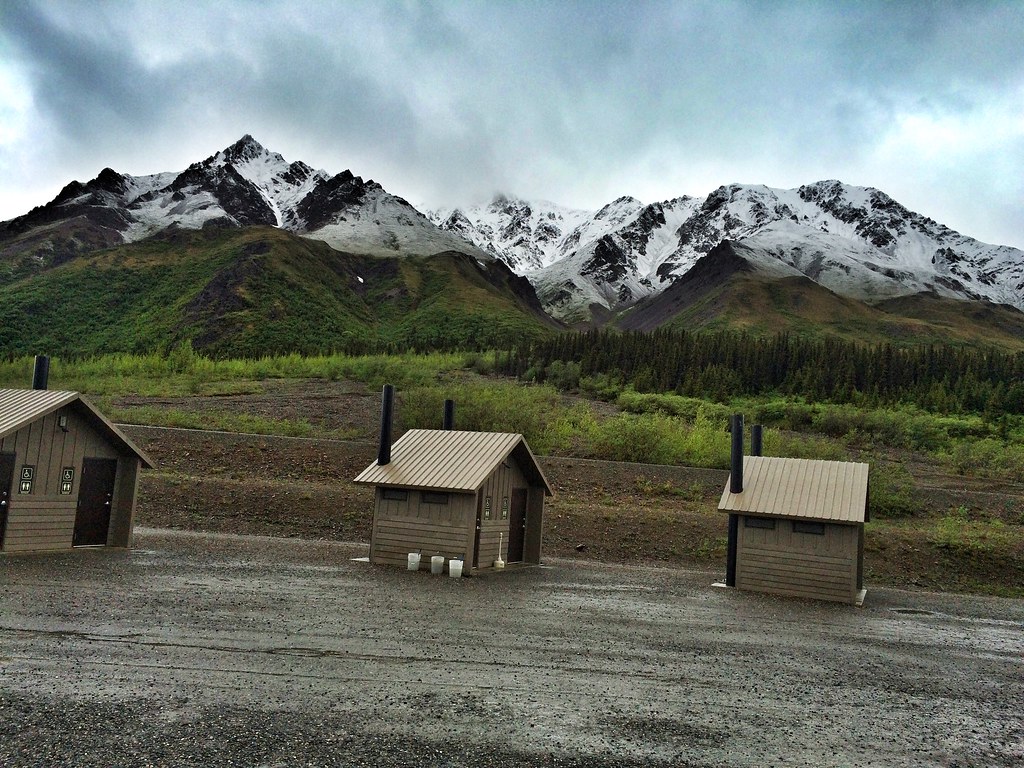 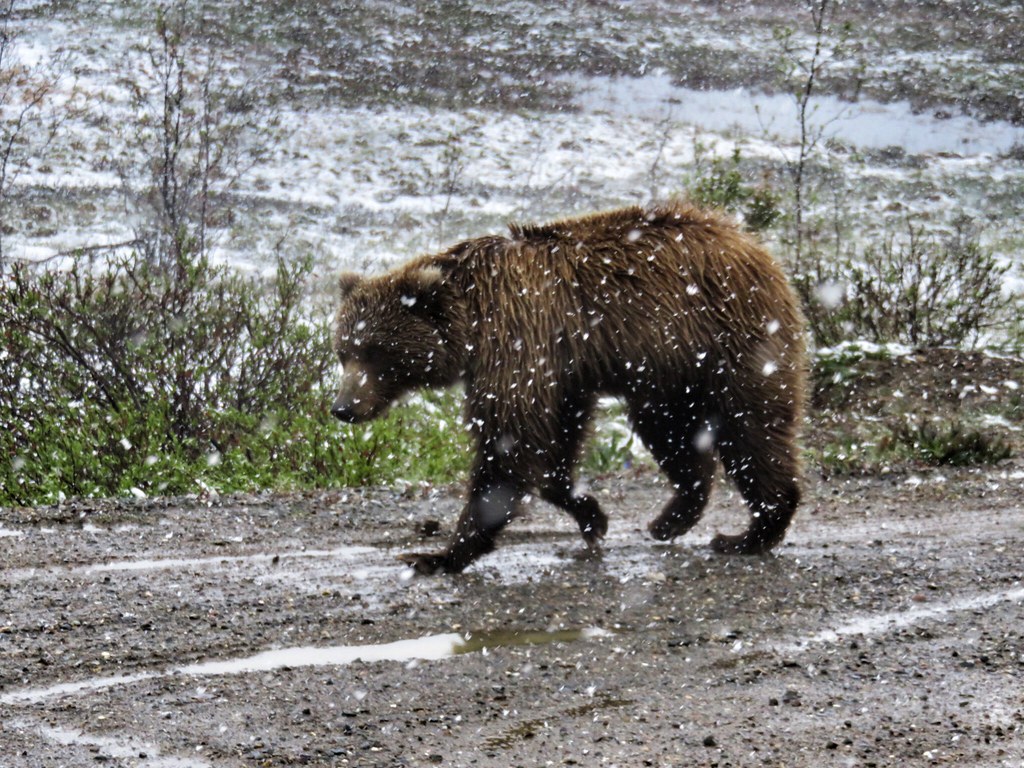 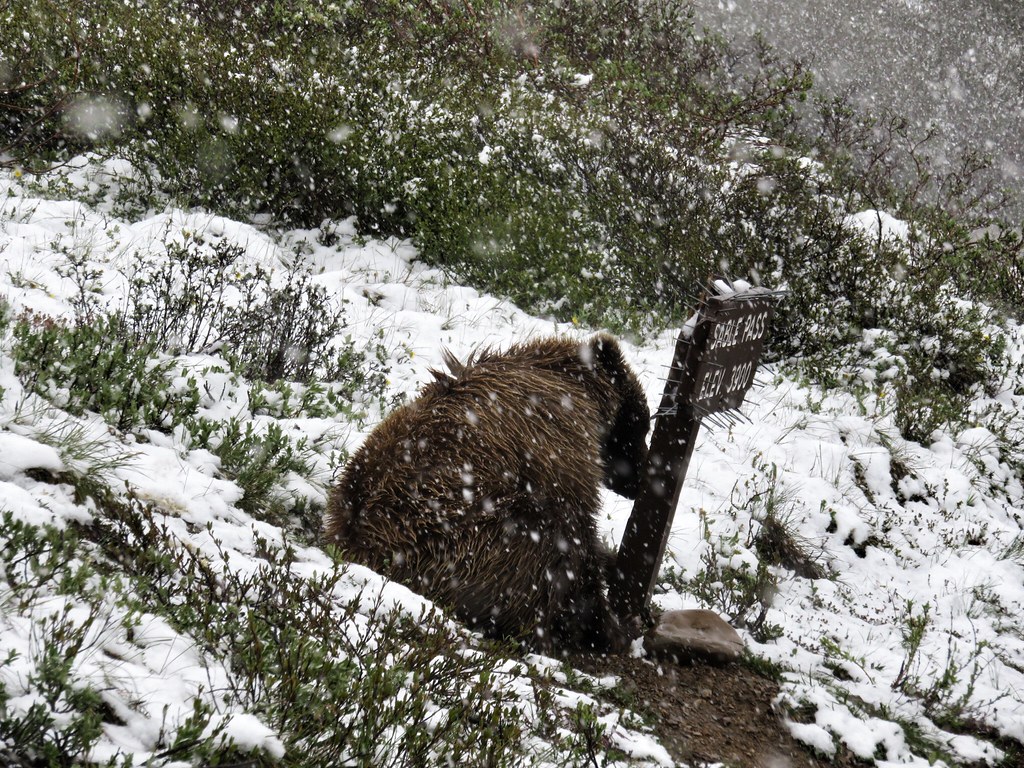 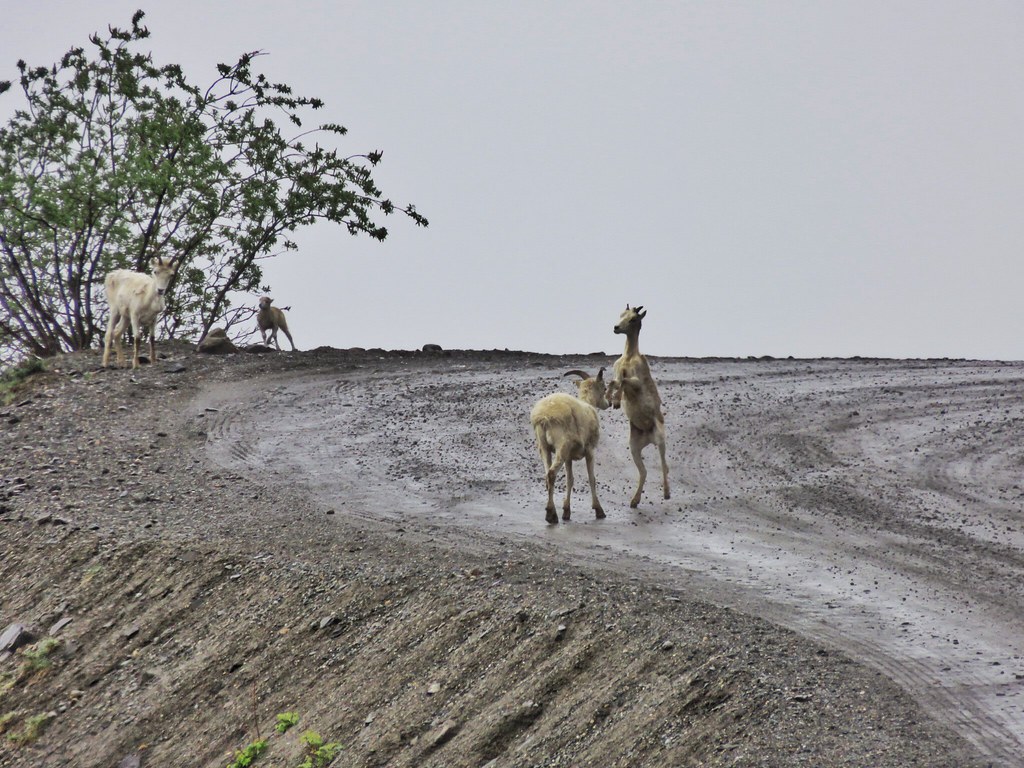